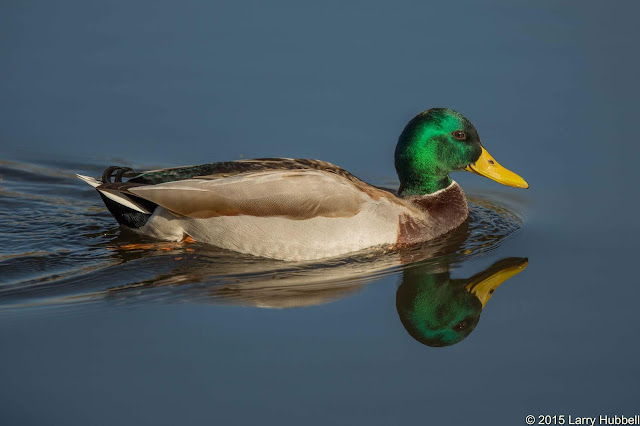 Mallards are the most common of all duck species in North America, according to All About Birds.

This post focuses on a selection of twenty duck species found around Union Bay. The group of twenty is divided evenly into ten dabbling duck and ten diving duck species. In particular, we will be looking at the rear view of the male ducks in breeding plumage.

Mallards dabble. You might imagine that they perceive life as a buffet filled with a variety of delicious delicacies. Given that they are the largest and most common of the dabbling ducks you might suspect they are bullies who paddle around and try a taste of anything and everything they want. You might be right. They are the only species I have seen eating crabapples off a tree on Foster Island. 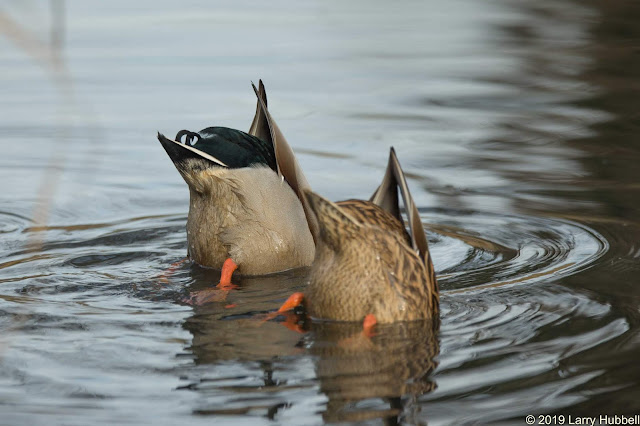 However, that is not why they are called dabbling ducks. The dabbling description is related to their inverted feeding style. With their legs attached at 'mid-ship,' they can paddle quickly, walk adequately and, critical for dabbling, they can easily hold their 'upper' body below the surface while feeding in shallow water. However, the placement of their legs is not very useful for diving. 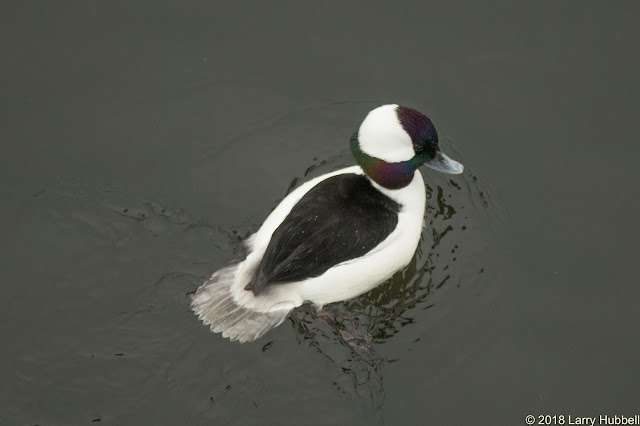 Buffleheads are one of our most common diving ducks. Their legs are attached near the back of the body, just in front of the tail. Their webbed feet function like flippers on a diver and greatly enhance their underwater mobility. As a result, they swim and dive superbly, although they seldom dabble and walk rather poorly.

Diving ducks also have relatively longer tails. I suspect they utilize their tails below the surface in a manner somewhat similar to a Cooper's Hawk. When a Cooper's Hawk flies through a forest, their long tails help them to twist and turn to avoid obstructing branches, to match the agility of their prey and to elude predators. 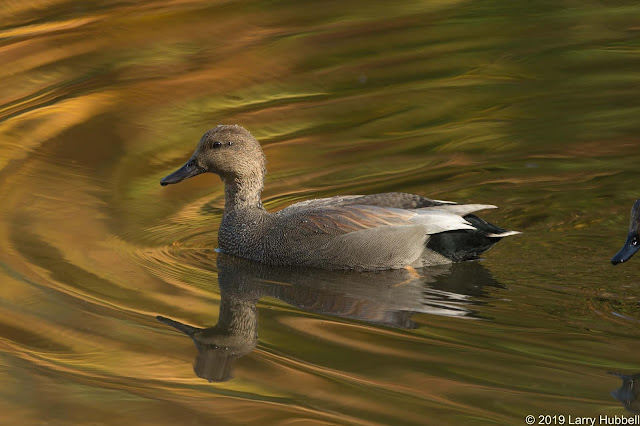 Similar to the Mallard in the first photo, a Gadwall is another dabbling duck with a dark bum. In both cases, they also have a few light tail feathers which seem even brighter against the surrounding darkness. After years, of watching male dabbling ducks, I finally noticed that most of them have black butts. The sudden realization sparked questions. Do all male dabbling ducks have dark bums? If so, what purpose do they serve?  What about the diving ducks? Do they have dark, light or a variety of bum colors?

One of my first thoughts was remembering that Dennis Paulson taught us that dark feathers are more durable than white ones. That seemed like a logical reason for the dark bums but then why do they have white highlights? Why not just solid black bums? 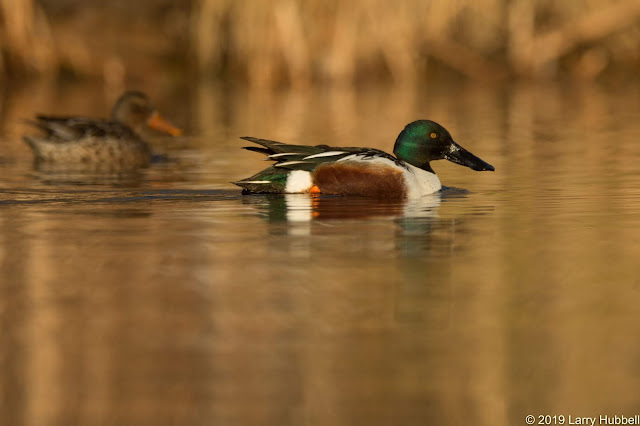 A Northern Shoveler is another dabbling duck with a dark bum and few light highlights. Among the dabblers, shovelers are the most dignified. They generally 'snorkle' about in circles with their bills below the surface while their bodies remain horizontal. 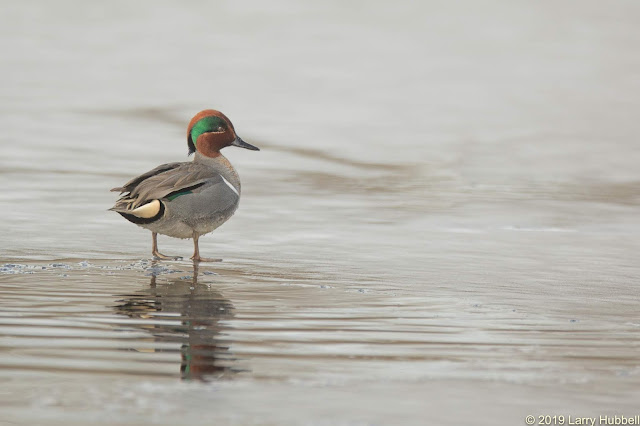 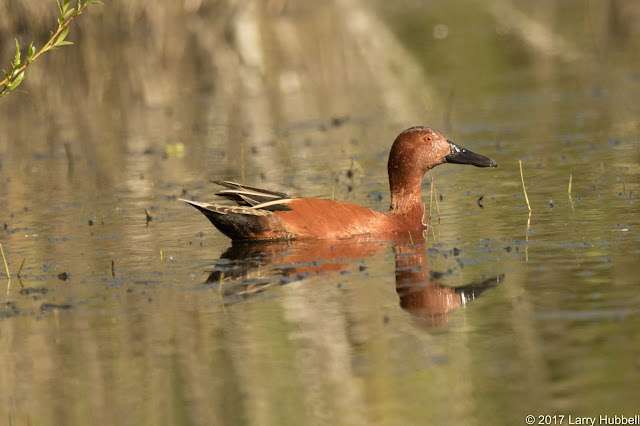 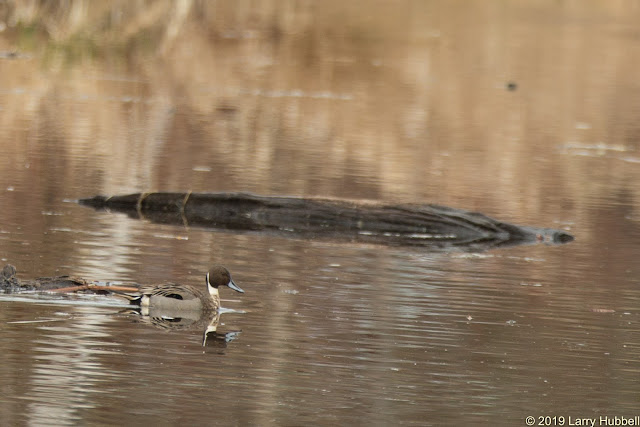 ...as do the Northern Pintails. 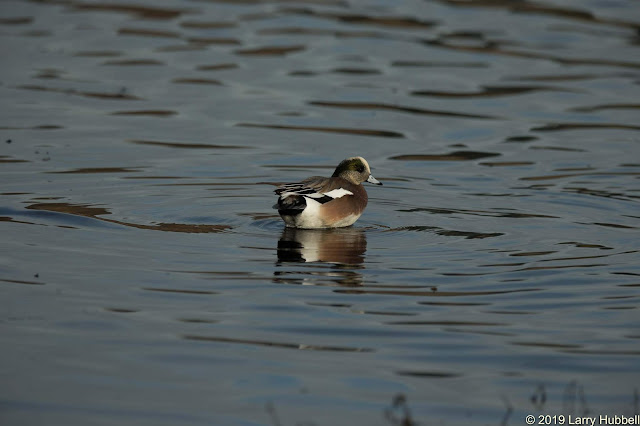 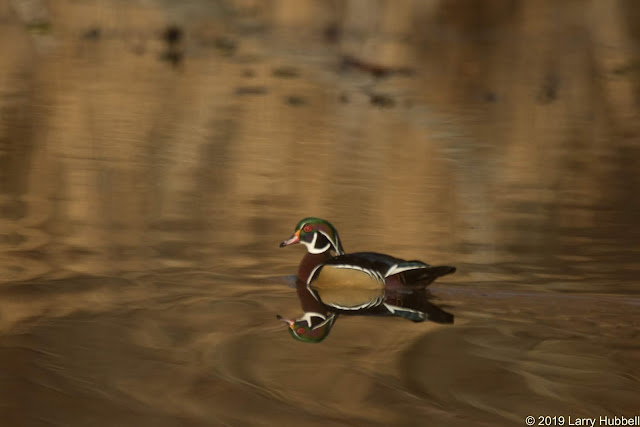 Even the more distantly related Wood Ducks, who I suspect just barely belong to the dabbling duck society, have dark bums. Their hind feathers are similar in color to their chests but noticeably darker than their sides and their white highlights. All ten of the most common, male dabbling ducks on Union Bay have dark bums in breeding plumage.

My friend Dave Galvin suggested the dark bums might make them less conspicuous to airborne predators. Camouflage certainly seemed like a plausible concept. 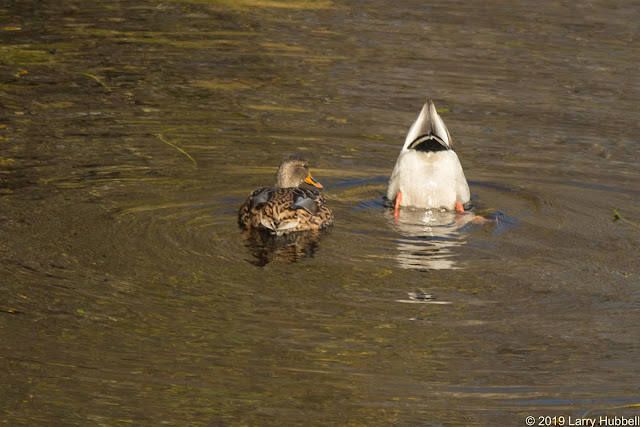 However, with so many light feathers surrounding the small black bums, the stark color difference seems like it would attract attention. If memory serves, I believe the underside of most male dabbling ducks is light in color creating this similar situation. 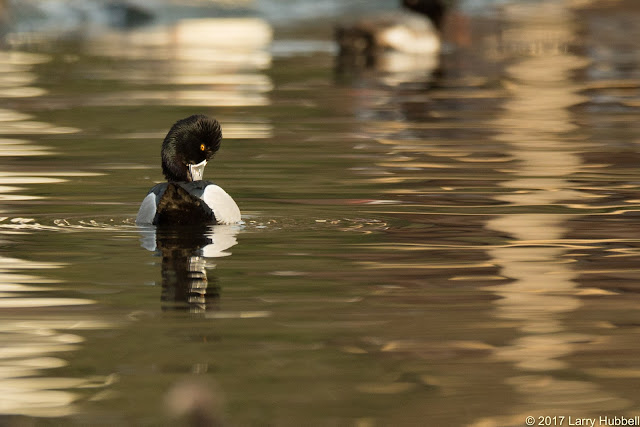 At this point, in my research, I was very curious about the color of the diving duck bums. I learned that Ring-necked Ducks have black bums. 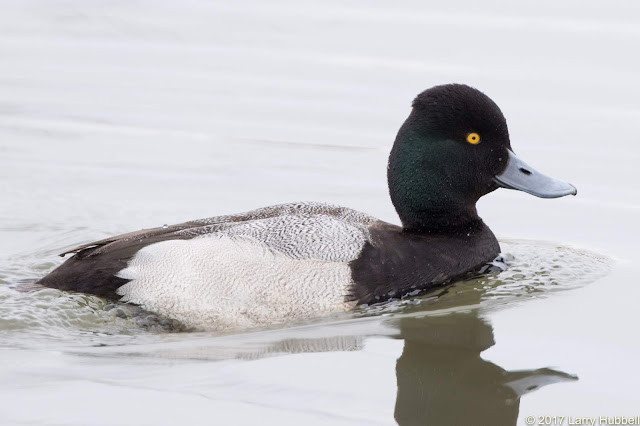 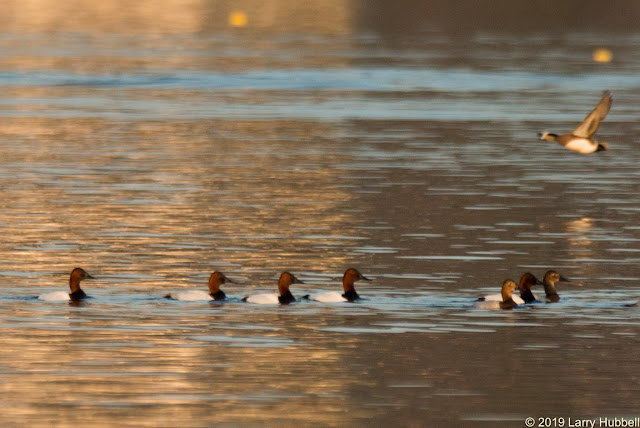 ...the Canvasbacks and the somewhat similarly patterned Redheads. 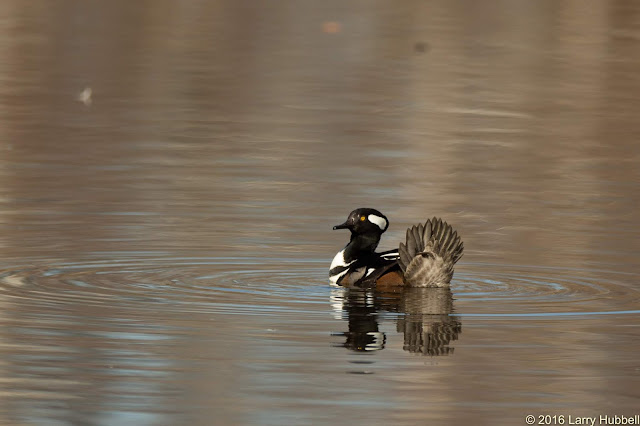 On the other hand, the Hooded Mergansers have a lighter colored bum... 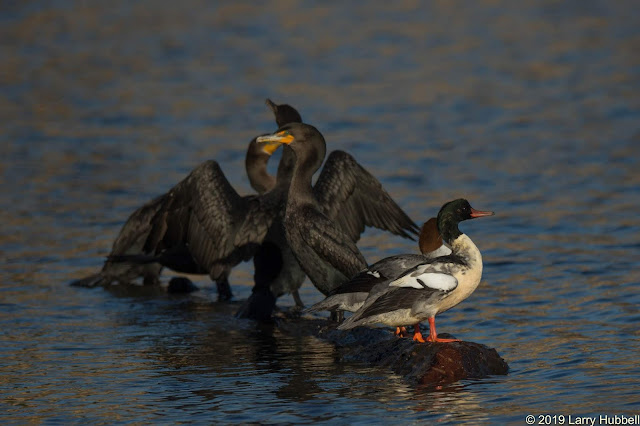 ...as do the male Common Mergansers... 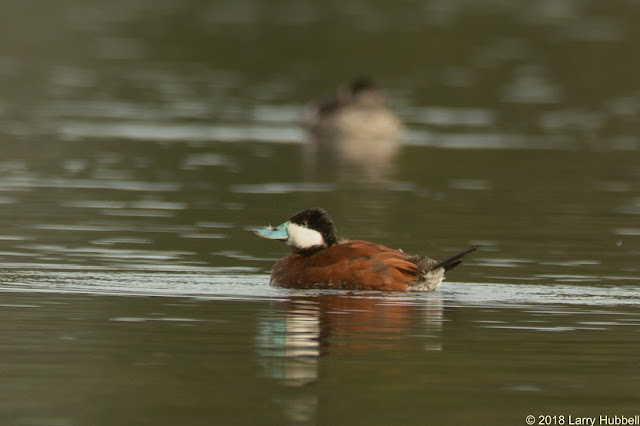 ...and the male Ruddy Duck and the Bufflehead which we saw earlier. This leaves the count among the diving duck species at four dark and four light bums. 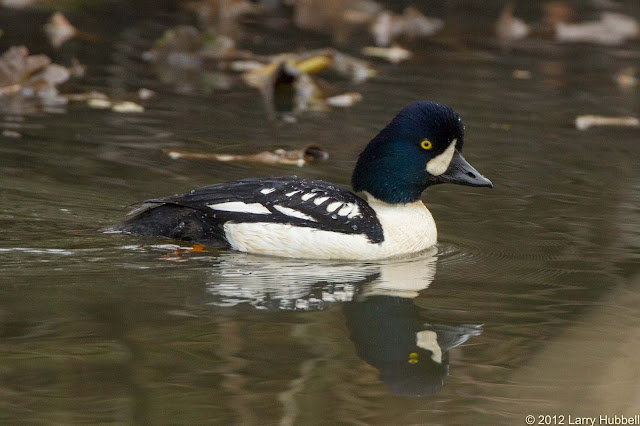 A glance at the Barrows Goldeneye and the ... 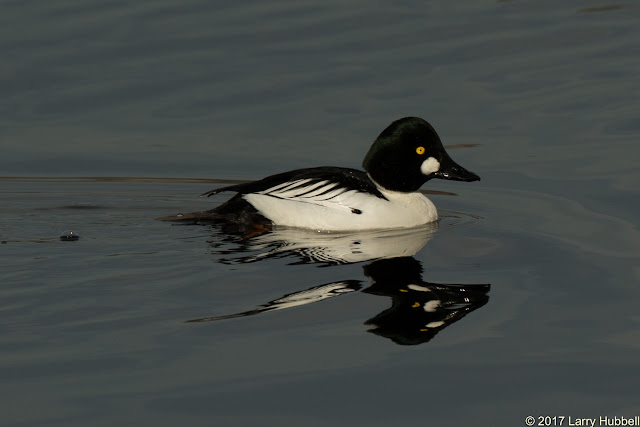 ...closely related Common Goldeneye initially convinced me that they have dark bums. Which would make the count six dark bums out of the ten Union Bay diving duck species. 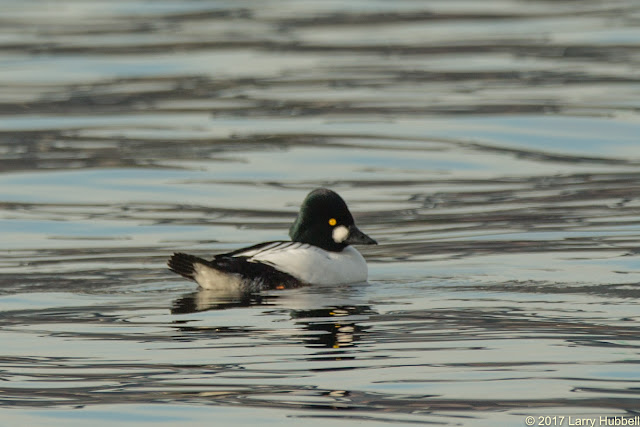 Luckily, I stumbled across this photo. Male Common Goldeneyes do have a dark tail but their bums are white. I do not have a similar photo of a Barrow's Goldeneye, but I suspect their bums may also be light. The bottom-line on the color of diving duck bums is apparently about fifty-fifty.

Finding photos of diving duck bums was much harder. Ultimately, I realized that when they are on the surface their tails are usually at or just below the surface, so their bums are hidden to human eyes. Also, they dive quickly. During the diving process, their bums disappear in flash. Plus they are often encircled by a splash of the water. This led me to conclude that the color of a diving duck's bum may have little or no impact on their top side lives. Although having a completely light underside may be an example of countershading which may help make them less visible to aquatic lifeforms.

In a surprising observation, five of the six diving duck species with white bums are cavity nesters e.g. both Goldeneyes, both Mergansers and Buffleheads. The only exception is the Ruddy Duck. Since only female ducks enter the nesting cavities, as far as I have seen, and only the males have the light-colored bums I cannot conceive of any logical reason for this correlation. I would love to hear about your thoughts and ideas. 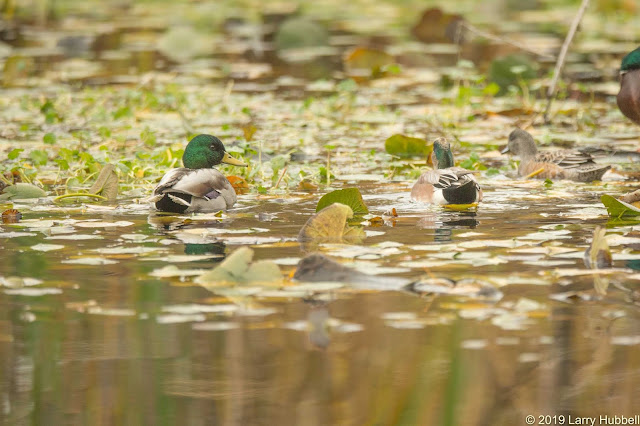 On the other hand, the consistent dark color and constant exposure of the ten male dabbling duck bums makes me suspect the darkness serves a useful purpose. Not only are dabbling duck bums exposed while they are feeding they are also obvious when paddling about on the surface. In essence, their bums are exposed nearly all of the time. Plus, many of the species have contrasting light-colored highlights which most likely draws attention to their bums.  My best guess is this flashy arrangement functions as a signal to other males of their species.

I suspect it informs competitors that the nearby female has a mate, even if the male mate has his head underwater, or if his back is turned. During breeding season an approaching male is unlikely to mistake a mated pair for two unaccompanied females. This idea is my best guess at explaining dark bums on male dabbling ducks. If you think of a more logical explanation please let me know. In any case, Thank You for following along!

Have a great day on Union Bay...where male dabbling ducks moon the competition. 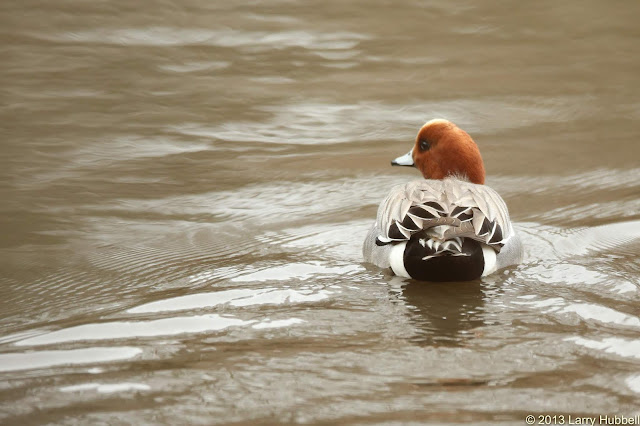 Eurasian Wigeon: As the name makes clear Eurasian Wigeons are not native to Union Bay, the Pacific Northwest or North America. They come here from Siberia, according to Seattle Audubon's free online application e.g. Birdweb. It is always fun to scan a large flock of American Wigeons and then suddenly spot the striking head of a Eurasian Wigeon.

Posted by Larry Hubbell at 3:00 PM