A Gift to the Future 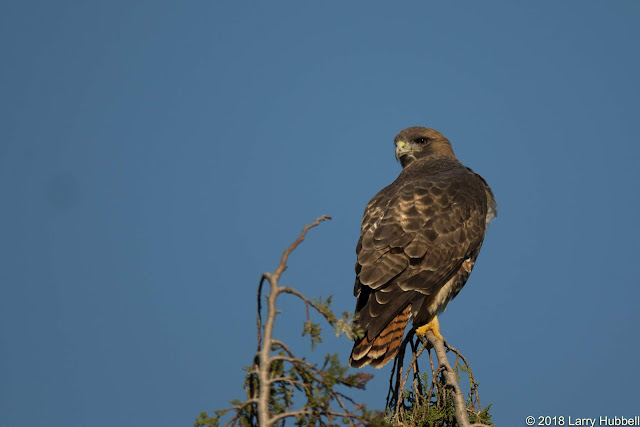 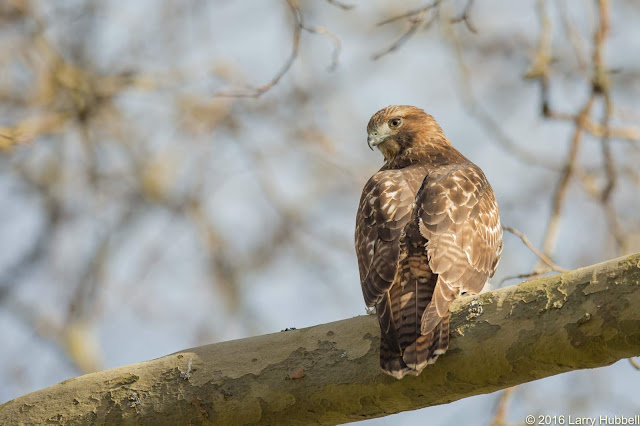 Immature Red-tails lack this coloring as mentioned in Seattle Audubon's Birdweb. This distinction seems to be fairly reliable in our area, however, Birds of North America mentions that there are as many as 16 subspecies in the Americas. Depending on where you visit (and where the Red-tails visit) you may see a wide variety of tail, chest and body colorings. Click on All About Birds to see some of the various subspecies. Luckily, (or not) we get mostly the common colored Red-tails in Seattle. 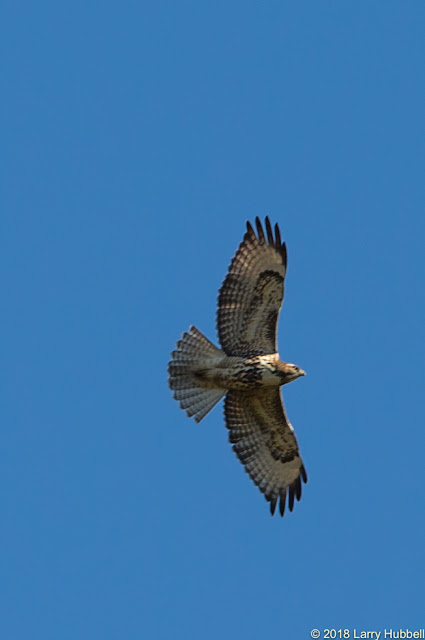 Curiously, even with mature birds, the underside of the tail is generally lighter. 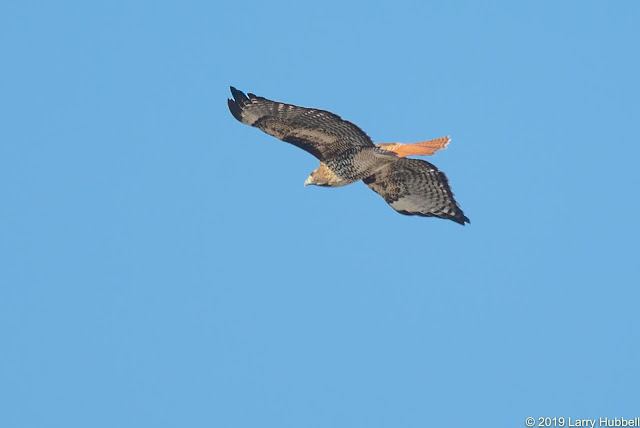 Waiting for a soaring bird to give you a peek at the topside of its tail can require patience. 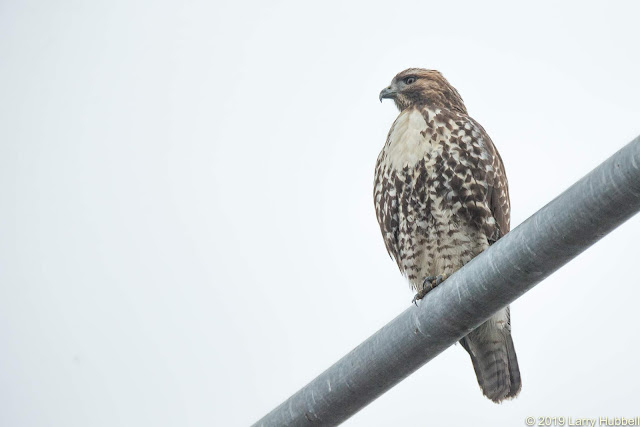 Bud Anderson taught me, that another generally common identifying characteristic for a Red-tailed Hawk is its indistinct belly band. When you add in their normally dark heads, especially as compared to the chest, I think this creates the overall impression of a white bib. I imagine the bib all tucked in and the hungry hawk just waiting to eat. The same All About Birds photostream shows that the bib is not universal, but I find it generally exists on our Union Bay Red-tails. 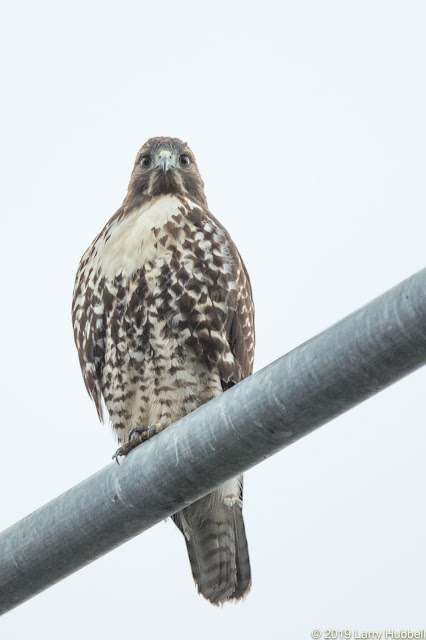 Another key identifier, which I learned from my friend Marcus Roening, is that at a distance a Red-tail looks like a football. It does not matter if it is sitting in a tree, on a telephone pole or on the horizontal support for a freeway light. 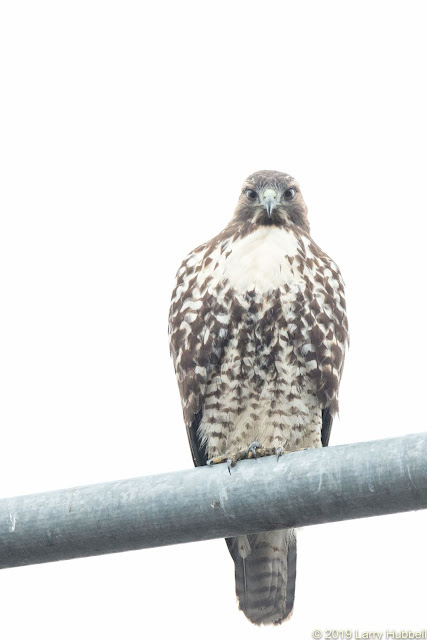 Last week, when I heard the distinctive sounds of American Crows harassing a predator I was lucky enough to locate this handsome bird. It quickly relocated to this position above the 520 off-ramp, near the Montlake grocery store - the one previously known as Hop-In.

(Sadly, due to the 520 Freeway improvements, this historic store will only exist through the end the month.) 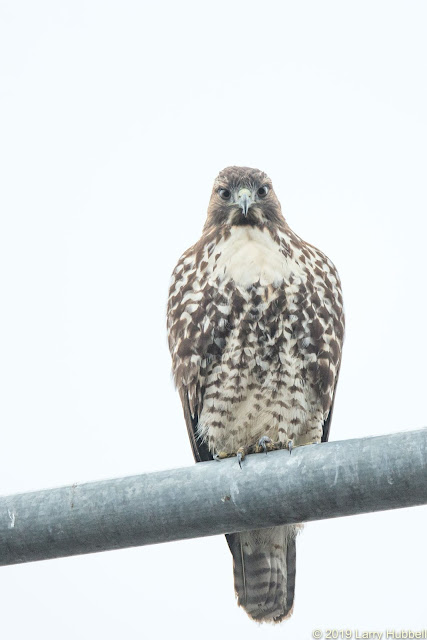 Flickering back and forth between this and the previous photo will give you an impression of the subtle triangulating movements which predatory birds use when zeroing in on a potential target. 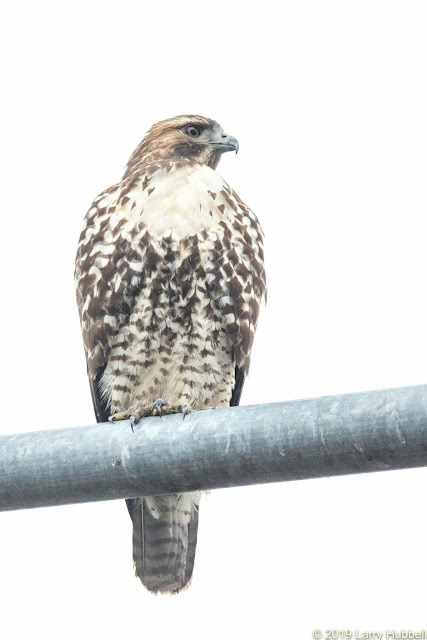 Sometimes Red-tails will soar but often they simply sit and wait for prey to expose themselves. 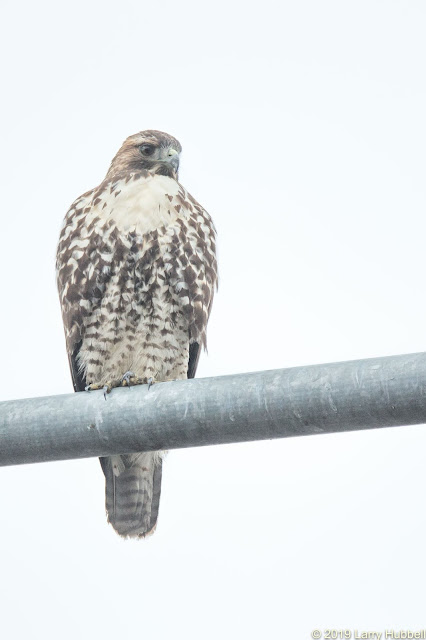 They are smart, flexible predators who do not care what type of meat is on the menu. They like rats, rabbits, mice, snakes, squirrels, birds or fish. They will eat them fresh, steal from others or consume leftovers - no refrigeration required. I suspect their taste for leftovers may be part of the reason Red-tails can often be found peering down over freeways. 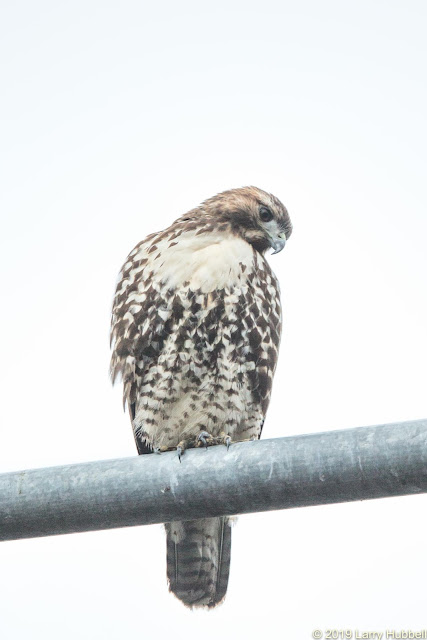 They love to hunt from a perch with nice open views and easy access. The grass beside our freeways provides food and shelter for several potential prey species - very similar to a field spread out below a horizontal tree branch. Red-tails readily adapt to human-altered habitat as long as it meets their needs. 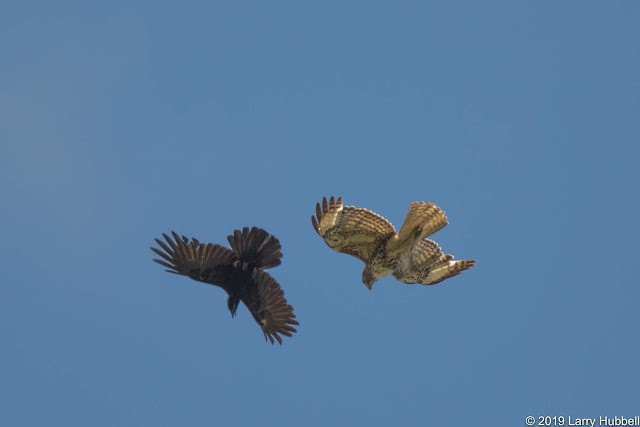 Red-tails are not the only bird species that have benefited from our habitat modifications. American Crows are smaller and probably smarter. The crows respect a Red-tail as a dangerous predator and will generally attempt to drive it out of their territory. 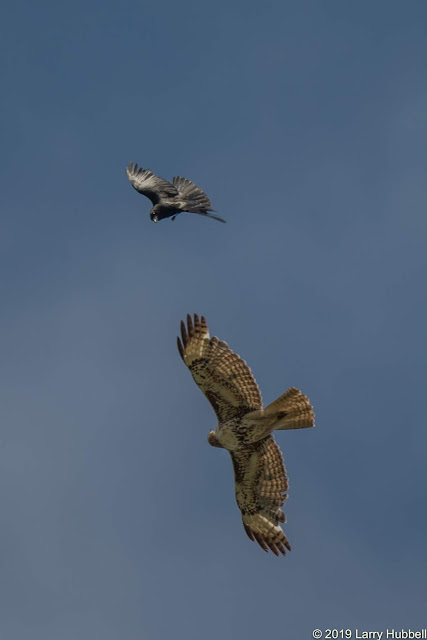 Last spring, I watched this Red-tail get driven out of the Union Bay Natural Area. You can see from the way its head is reversed, by 180 degrees, that it was intimidated by the crow's attack. 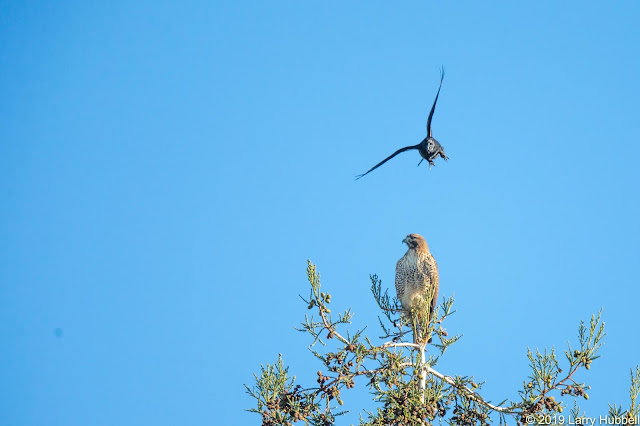 Last month, I saw a similar situation immediately north of 520. 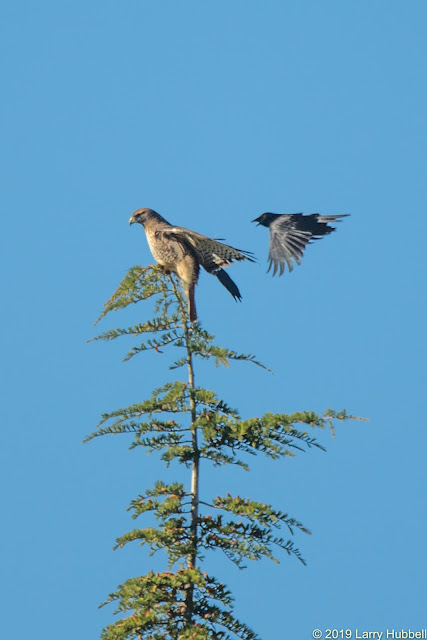 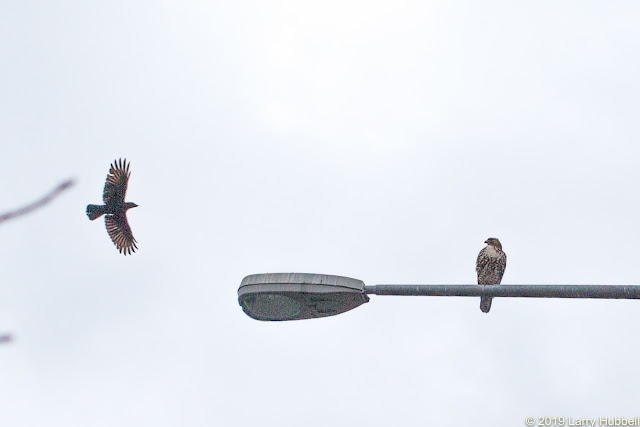 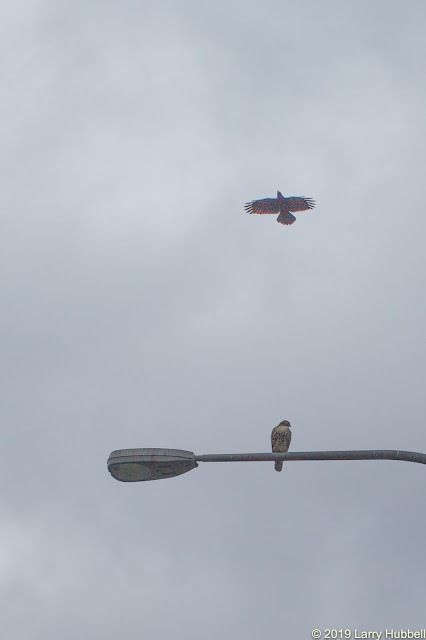 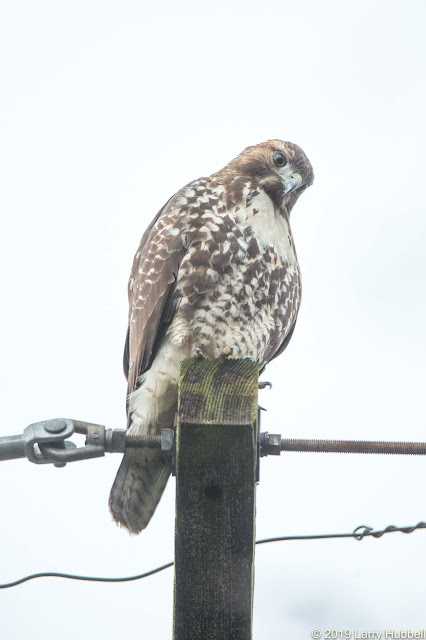 It moved to a nearby telephone pole before finally evacuating the area altogether. 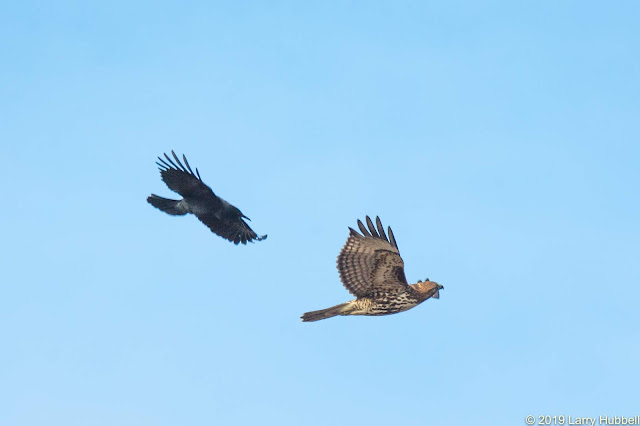 The natural creatures we find in the city are a direct result of the habitat we create or enable. We have an abundance of crows because our yards, commercial establishments, and often our garbage, provide a surplus of food for them. By working to restore the quality of our yards (see Going Native below) and our waterways we will be giving the gift of wildlife to future generations of city dwellers.

Thank You, to each of you who wrote letters requesting the Council's help.

This next phase of the project will provide a critical design foundation for future restoration efforts in and along Arboretum Creek. This will help, "Maximize the diversity of life in Arboretum Creek...while rekindling the love affair between Seattle and nature." (Click on the golden highlight above to learn more.)

Thank you to everyone involved, and especially, Dave Galvin. Dave has been involved, supportive and devoted to this project from the very start. He has contributed countless hours to the idea of restoring life in this urban stream. Thank You!

Thank you to Dennis Paulson for forwarding this link to a concise and thoughtful review of the types of bird habitat in critical need of restoration. 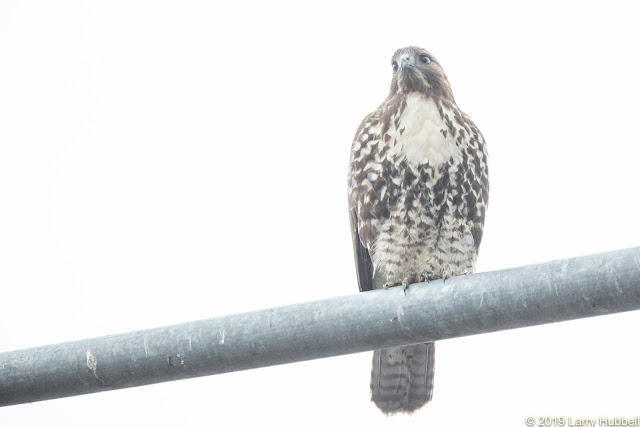 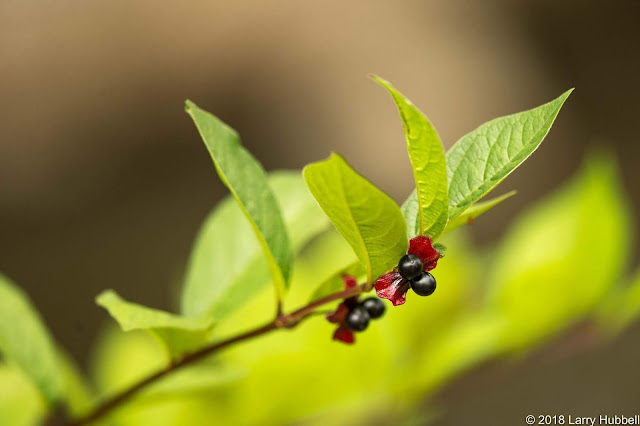 Is this fruiting plant native to Union Bay?

Black Twinberry: Yes, it is a native plant. Click on the name to read more about how it can be used in your yard and then scroll to the bottom to see a list of birds that appreciate its fruit.