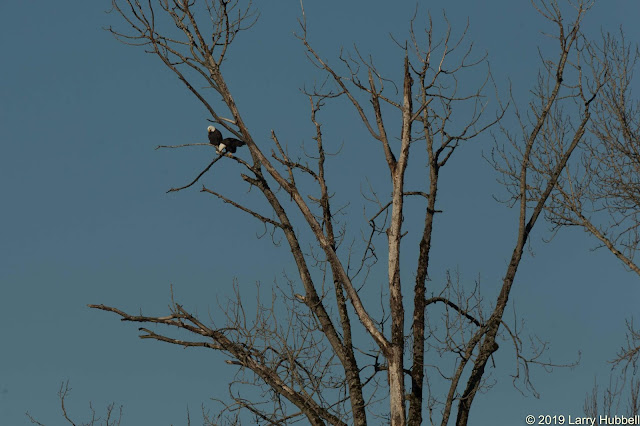 During the first week of March, I noticed Eva and Albert, the Broadmoor Bald Eagle pair, perched above Duck Bay. They appeared to be enjoying the sunshine and each other's company. My best guess is, they were actually considering adding waterfowl to their morning menu. 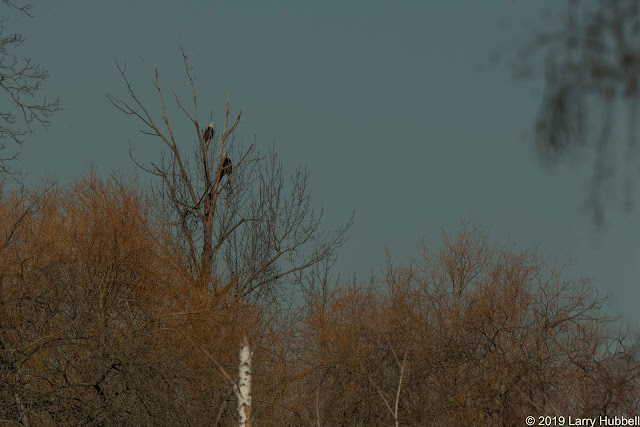 Further to the northwest, Monty and Marsha were also sitting in the sun. The Montlake Cut pair were relaxing just beyond the invisible border which divides their neighboring territories. My impression is that the border aligns fairly close to the eastbound 520 on-ramp which originates in the Arboretum.

During fall and winter, it is common to find our local eagles paired-up and sitting quietly side-by-side. However, as the increasing solar intensity burns winter away, the local eagle behavior begins to change. Between now and autumn, there will not be many opportunities for the Eagles to get away from their nests and share relaxing moments sitting in the summer sun. 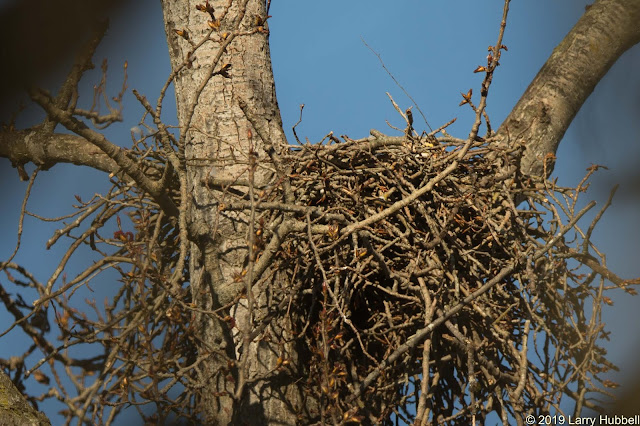 This is Monty and Marsha's new nest. It is about six feet below their original nest, which began to crumble last July. From our earthbound perspective, this new nest may look empty. I suspect it is not. The nest building, which we saw in last month's post, has virtually stopped. The nest has grown. It now appears to be fairly well-balanced and hopefully secure.

If you look closely you can faintly see small patches of white showing through the upper right portion of the nest. I believe this hint of white is reflecting from the feathers on Marsha or Monty's head. 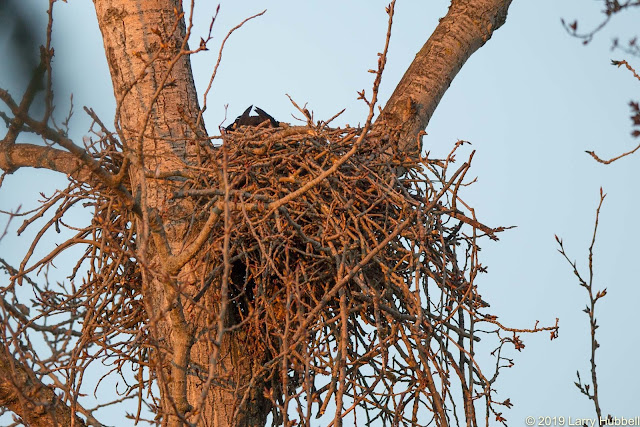 On Tuesday, I first noticed what looked like nesting activity. From this angle, it seems obvious that one of the eagles has its head down in the middle of the nest, while the tips of its folded wings are pointed outward. I wondered what the eagle was doing? Was it simply adjusting the placement of a stick in the nest? 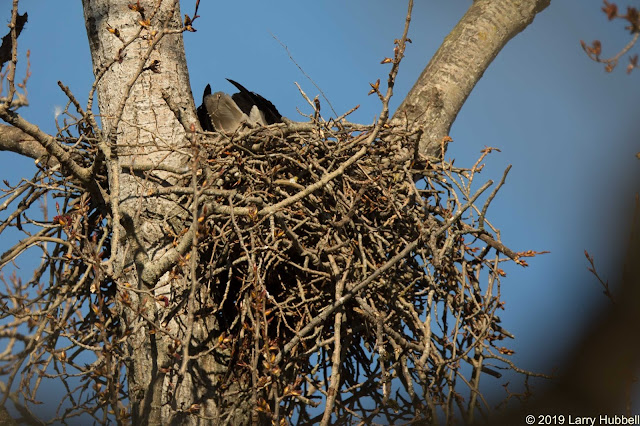 On Thursday, I caught a similar view. The nagging question in my mind was, had incubation begun? Was the eagle turning eggs to keep them uniformly warm? All I knew for certain was the eagle was focusing inward toward the middle of the nest. 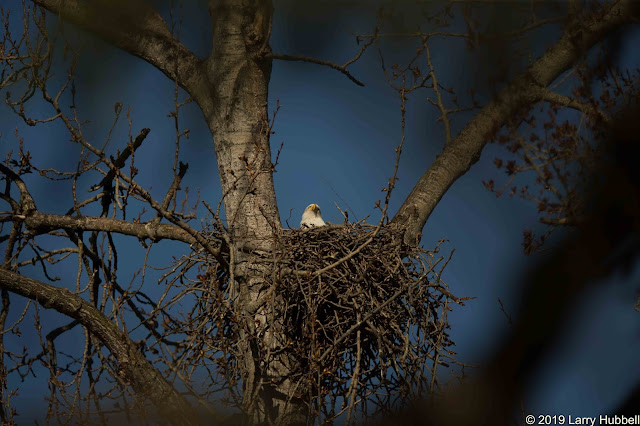 Twenty minutes later, with her identifiable head showing, I could at least be positive that I was seeing Marsha in the nest. 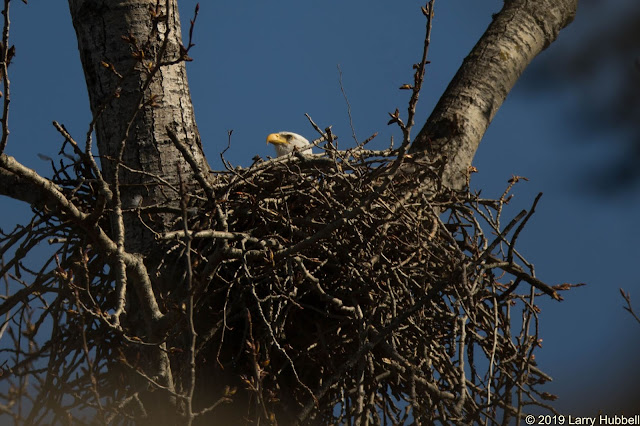 Marsha's white head has a uniquely grayish-brown cast behind and below her eyes. 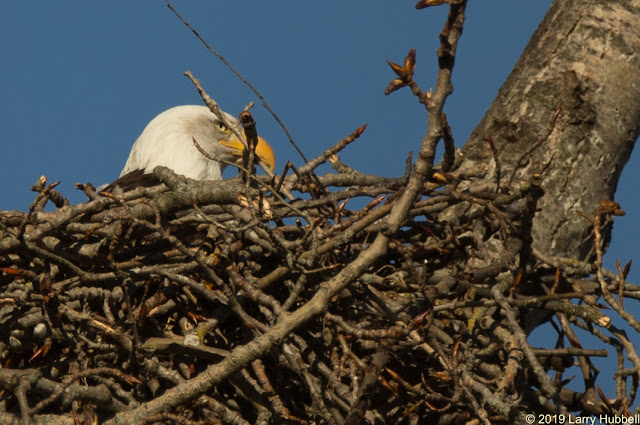 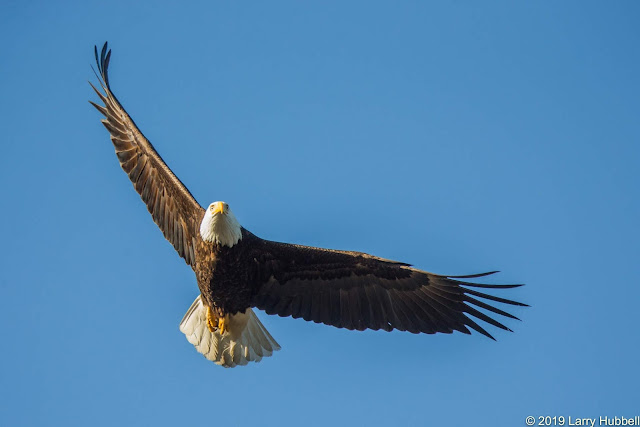 A few moments later Monty arrived. When he landed just above the nest, Marsha abandoned her post and Monty took over duties in the nest. I have no way to actually see eggs in the nest, however, their clear exchange of roles convinced me that Monty and Marsha have initiated the parental process once again. 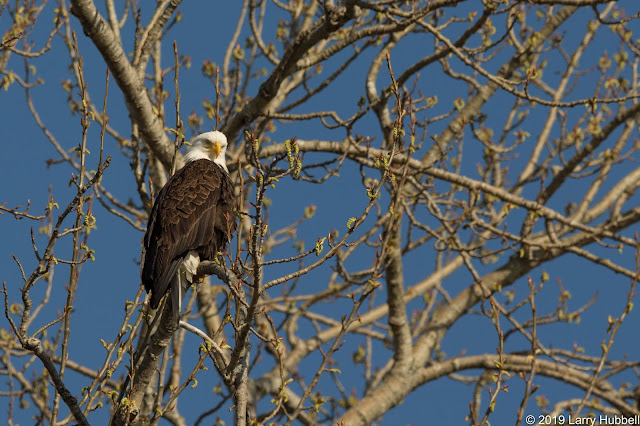 Yesterday, Monty appeared to be on-watch just a couple of trees away from the nest. 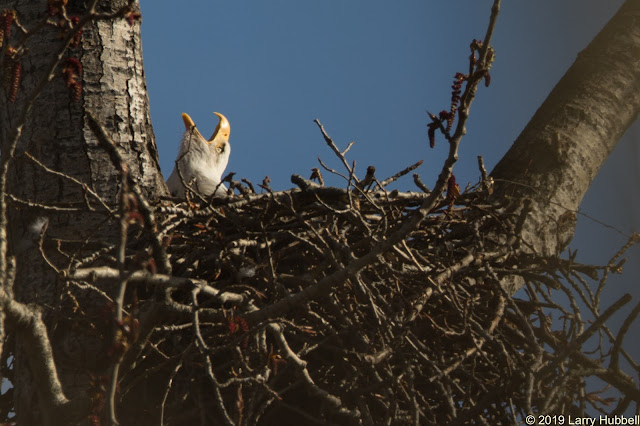 Marsha, on the other hand, was in the nest and voicing her displeasure with the crows overhead. It seems obvious, she is using her body to defend and protect eggs in the nest.

During the last year, Monty and Marsha seem to have learned a lot. The new nest is in the largest fork in the tree. The nest was started and completed about three weeks earlier than last year's nest. The timing of their egg-laying and incubation appears to be impeccable. 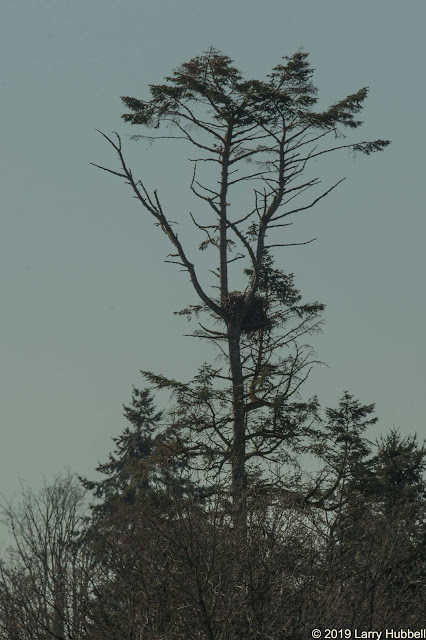 Although it is distant and difficult to see, one the of the Broadmoor Bald Eagles (Eva I presume) looks like she is also on eggs in her nest. Last year, I believe I first noticed Eva appearing to be on eggs on March 23rd. It sure looks like both nests are on a very similar schedule this year.

Given that it will take just over a month for the eggs to hatch, plus a week or two for the young to grow large enough to stand and be visible from the ground, I am estimating our first sighting of young eagles will be in the first or second week of May. If everything continues as expected, that would mean the young will be likely to be leaving the nest sometime in July. Wouldn't it be wonderful if one of their offspring learned to fly on Independence Day?

In the wonderful weekly post entitled 'Water Is Life', from my friends Dan Pedersen and Craig & Joy Johnson, mention the free screening of Craig and Joy's new movie, 'Birding Whidbey Island'. I was lucky enough to view an early release of the movie. The movie shows birding locations on Whidbey Island which I had never heard of and displays bird behaviors which I had never seen. Equally inspirational are Craig and Joy's absolute love and commitment to birds and nature. If you have the opportunity, I would highly recommend seeing this movie.

The movie will be shown at 2pm tomorrow, March 24th, and also (at 2pm) on March 31st at the Clyde Theatre in downtown Langley, WA.

In the comments to last week's post, The Mythical Ravens, Ann recently wrote about seeing three ravens in Montlake this week. I am seeing one or two almost every day and very excited that they are still hanging around. Finding out about a third raven in the area triples the excitement. 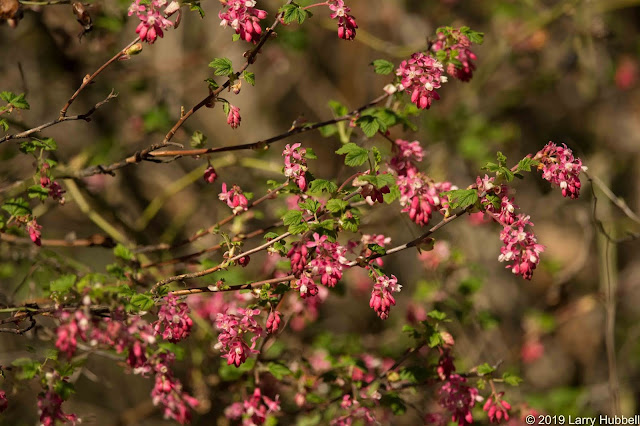 This wonderful native plant with the pinkish-red flowers is currently blooming. What is it called?

Note: There are a couple of clues embedded in the first sentence.

Posted by Larry Hubbell at 2:03 PM