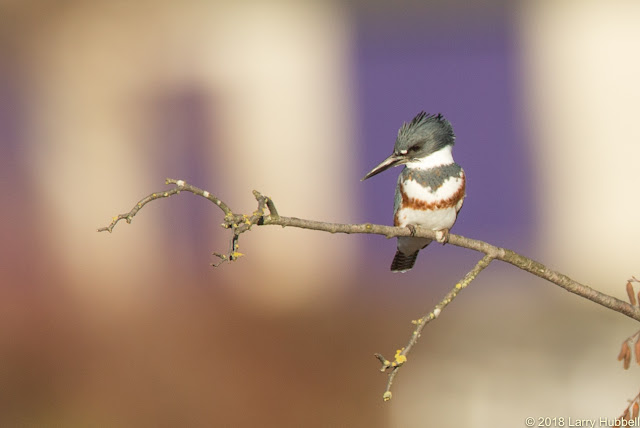 Adult female Belted Kingfishers have a distinctive second belt which is chestnut in color.

The chestnut coloring on Female Belted Kingfishers makes them more colorful than the males. This is a fairly unusual arrangement for a sexually dimorphic bird species. In most avian species, when the two sexes are distinctive, the males are more colorful. Usually, sexually dimorphic females tend to have more camouflaged coloring and spend more time sitting on the nests and tending to the young. 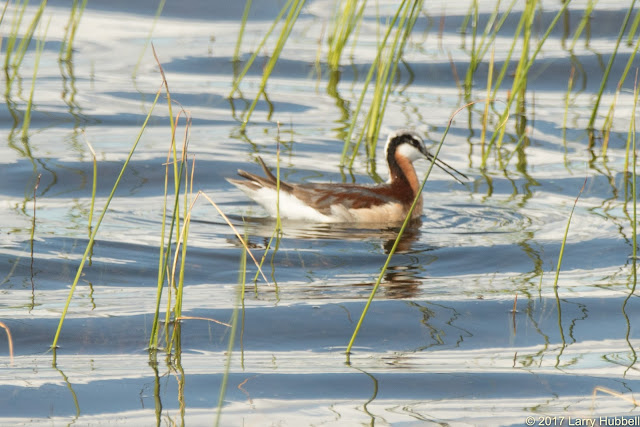 Wilson's Phalaropes are a perfect example of both color and role reversal. In a single breeding season a female phalarope may inspire multiple males to cover and care for separate nests full of her eggs.

Sadly, Belted Kingfishers are not known to exhibit reversed role behavior. It would be fascinating to observe. You can read additional thoughts regarding their reversed coloring by Clicking Here. 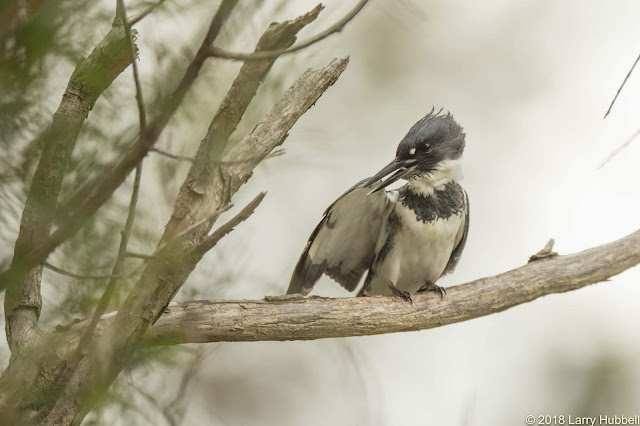 A male Belted Kingfisher with its fairly drab coloring.

I usually see Belted Kingfishers sitting on a small branches above the water. From such a perch they search for small fish passing below. When the opportunity presents itself, they dive. To my knowledge, they are one of only three species of birds which dive headfirst into Union Bay.* 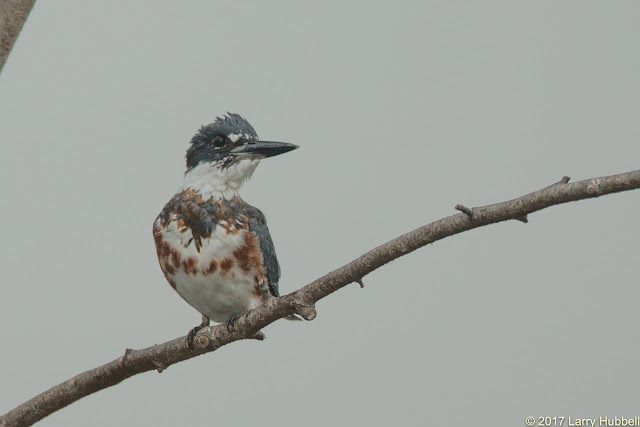 This photo was taken in October and if not for the mix of coloring in the upper belt I might not have realized this was a first year bird. 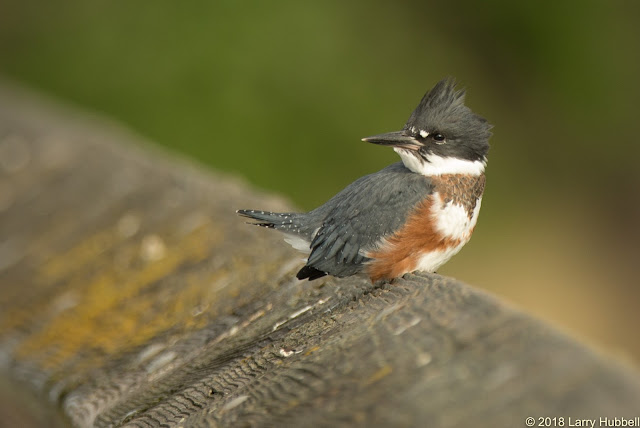 This photo was taken in June. It shows a much younger bird. The chestnut coloring in the upper belt is the most obvious hint. Do you see any other indications of youth? 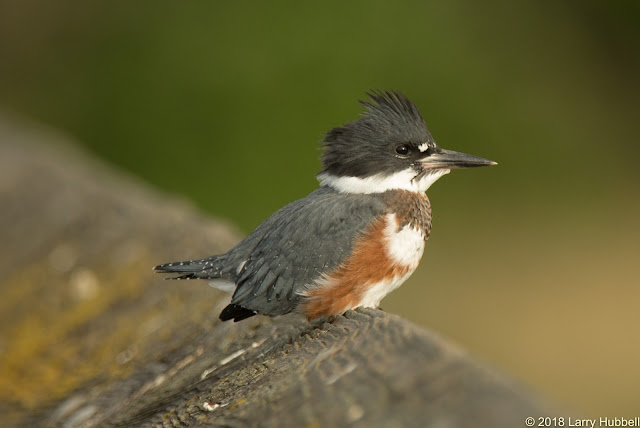 The abbreviated tail and the exceptionally short bill don't stay that way for long. 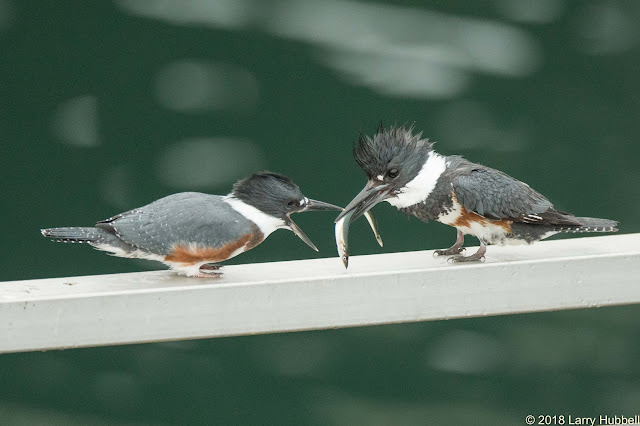 Watching a parent bring food to her young is another way to identify an immature bird. 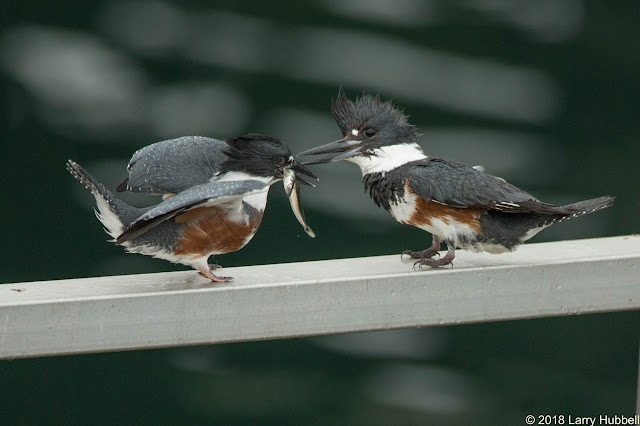 Do you notice any other differences? Did you observe that the feet of the adult are larger and darker. 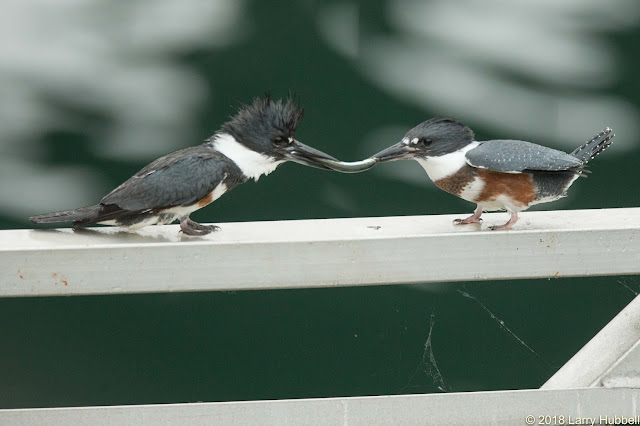 Which one of these is the adult? 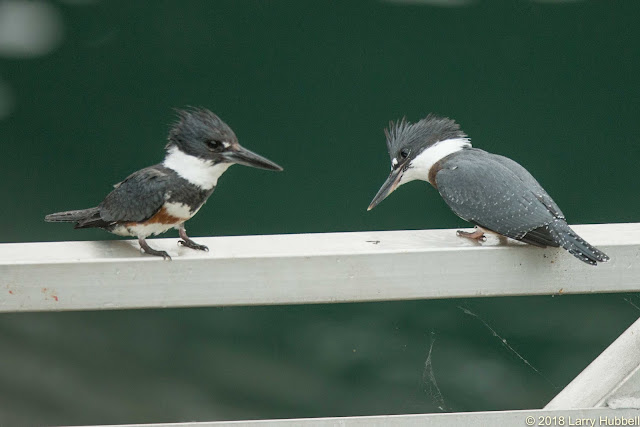 Another difference are the small white feather tips on the folded wings of the young bird. White colored feathers have less melanin and less strength so they tend to wear away leaving adult wings looking consistently dark - when fold way on their backs.

Here the young bird was looking down at the fish which just slipped away. A situation which seems surprising similar to a human toddler dropping his food on the floor. 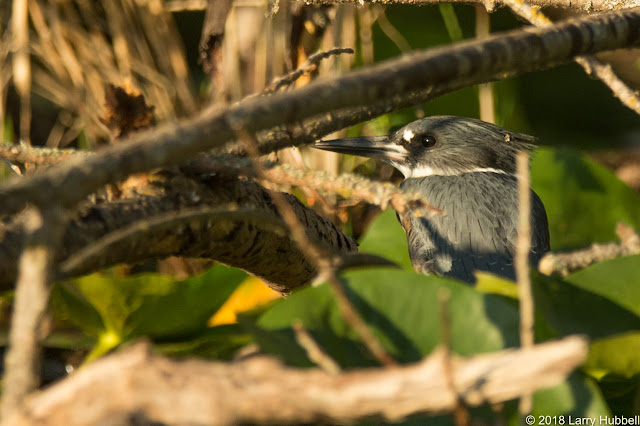 The dark central streaks in the feathers on this bird's back were uniquely visible from this particular angle.

This photo was taken in July. I was surprised to see this kingfisher sitting among the lily pads, just inches above the water. I do not ever remember seeing a Belted Kingfisher sitting so close to the water. From such a low perch there would be no chance to gather speed and dive after a fish. Plus, being so low would make it difficult to evade a Merlin or a Sharp-shinned Hawk, both of which hunt in this area.

I was shocked when the kingfisher leaped into the water and started using its wings like paddles. With all the splashing and thrashing, there was no chance it would catch a fish. 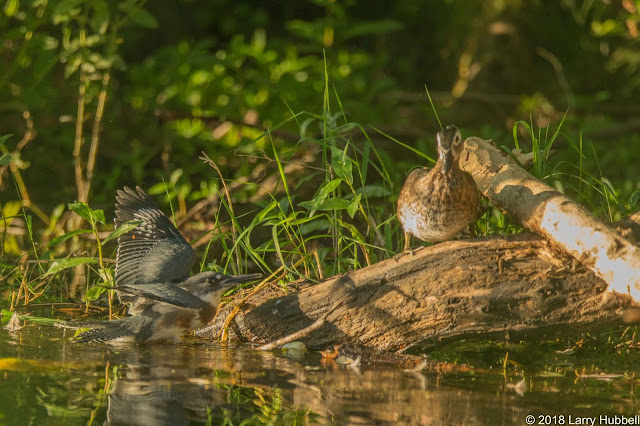 The kingfisher battered it way across five or six feet of shallow water until it arrived at a log below a very apprehensive female Wood Duck. The duck side-stepped up the log while the kingfisher flapped its wings, apparently asserting ownership of the area. Given that Wood Ducks are more than three times heavier than Belted Kingfishers the retreat was a somewhat surprising. 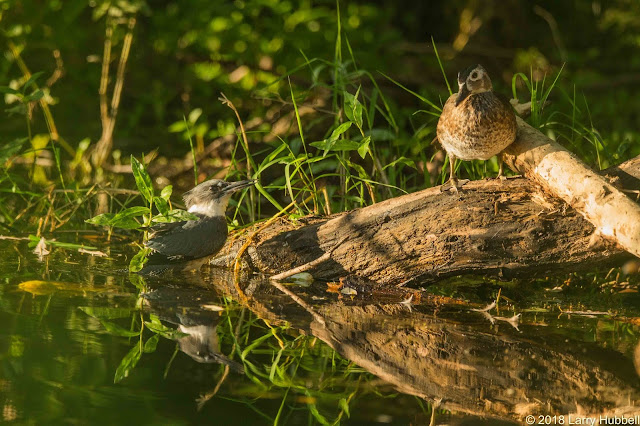 The Wood Duck was definitely intimidated and continued to edge away. After a few moments the kingfisher leaped back in the water and paddled to a more distant log. 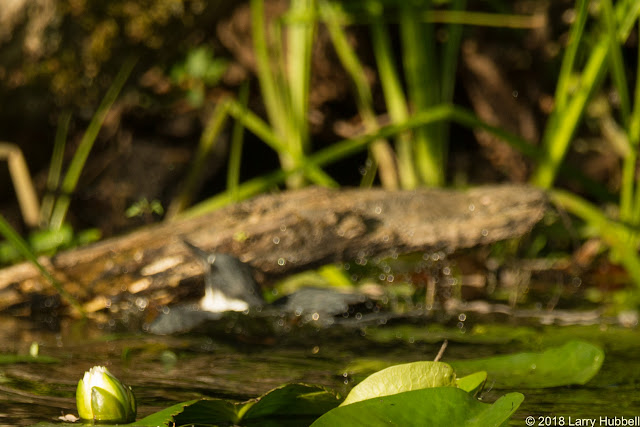 Sadly, this single mis-focused photo is my best documentation of the paddling process.

My first thought was to wonder if this was a bird who had not yet learned to fly. Could the paddling be part of their fledging process e.g. a means to improve the strength of the wings? 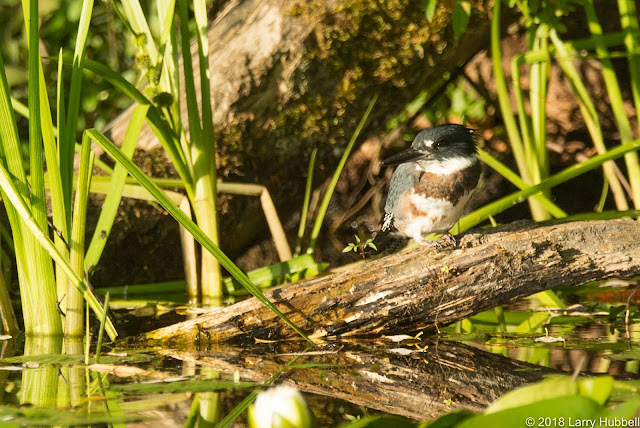 When the young bird turned to face me I could clearly see the mottled upper belt which confirmed its youth. 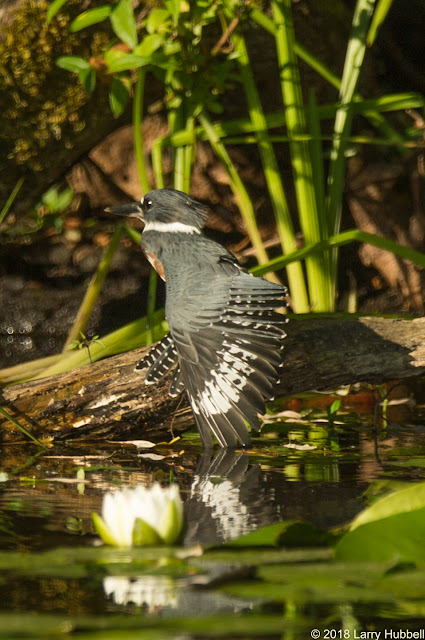 When the bird turned again and stretched its wings I could see that they looked well-developed and quite capable of flight. Plus, the bird which I photographed in June was already flying - even though it was most likely a full month younger.

Never before, or since, have I seen a Belted Kingfisher doing the butterfly stroke. Normally, I see them hit the water, grab a fish and fly back to their perch. This odd swimming behavior was totally new to me, but the territorial theme reminded me of a previous experience. 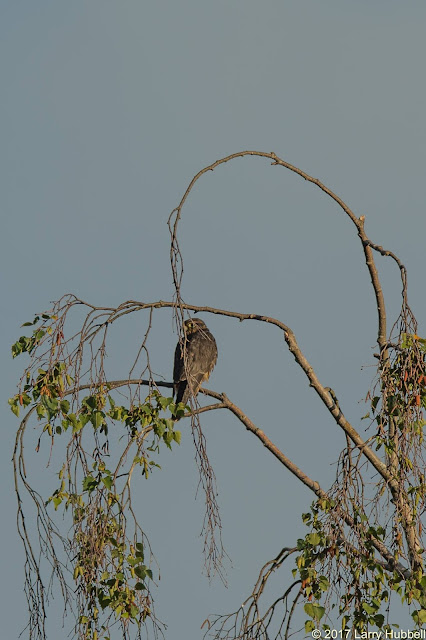 Last year, I noticed this Merlin sitting in an Alder tree above Duck Bay. The Merlin promptly left the area when a chattering bird flew directly at its perch. 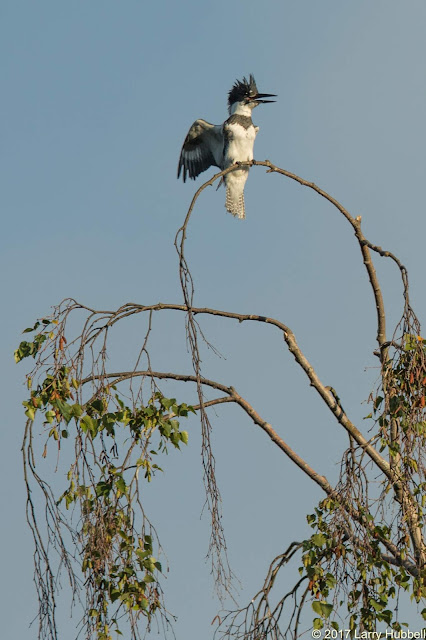 The new intimidating arrival was this Belted Kingfisher. In general, Belted Kingfishers weigh an ounce or so less than Merlins. Since Merlins hunt and kill birds which are smaller than themselves, both the Merlin and I were surprised by the kingfisher's aggressiveness.

In the book 'The Genius of Birds' the author mentions that Belted Kingfishers are '..fiercely territorial..' Both of these incidents reinforce this assessment. If kingfishers will chase and intimidate Wood Ducks and Merlins who knows what other birds they might attack. I hope, that like me, you will now be inspired to keep a close eye on the mighty kingfishers of Union Bay.

* Osprey and Caspian Terns are the other two plunge-diving species which I have noticed around Union Bay. The Osprey vary their diving process by throwing their feet in front of their head just before they enter the water. Not surprisingly, the Osprey are the only one of these three species to catch fish with their feet.

We have not had any confirmed sighting of Lucy since the last post, but we have had a couple of possible sightings, one of which was of a bird flying south over the freeway. Once the smoke clears it will certainly be interesting to watch for a young, mostly-dark Bald Eagle with an aluminum colored band on the right ankle. By the way Jeff Brown from PAWS says the measurement they did of Lucy implies she is a male. I guess it is time to start calling him Luc, which I pronounce as Luke.

Charlie the first sibling which fell from the nest is still at PAWs. Jeff says s/he has learned to fly but is still exhibiting some lameness. Eventually, this bird should be released but most likely at a location where lots of other young eagles are feeding. This approach may help the young bird to learn to feed itself. Sadly for us, this means it is unlikely the young eagle will be released near Union Bay.

This post seems like the perfect time to review some of our most common Union Bay butterflies. 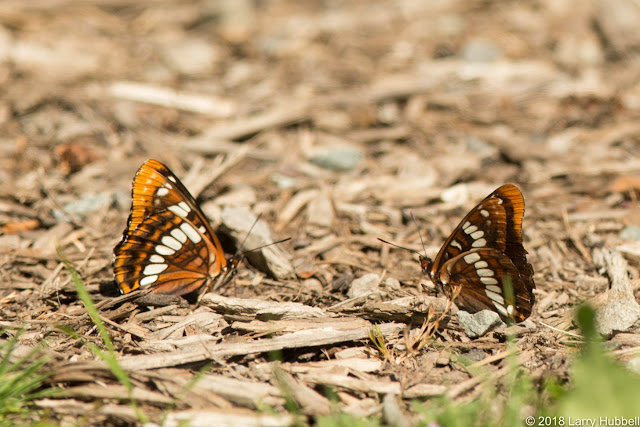 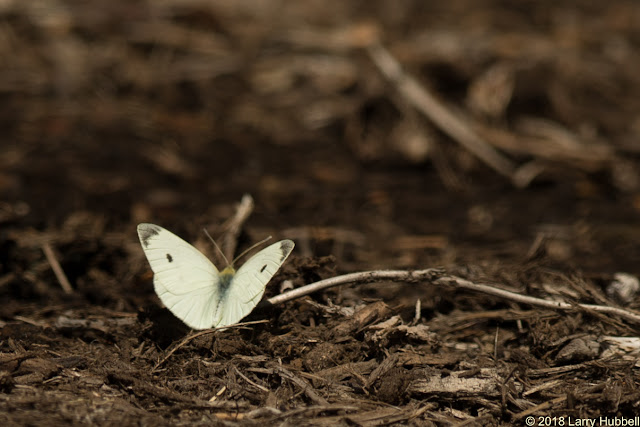 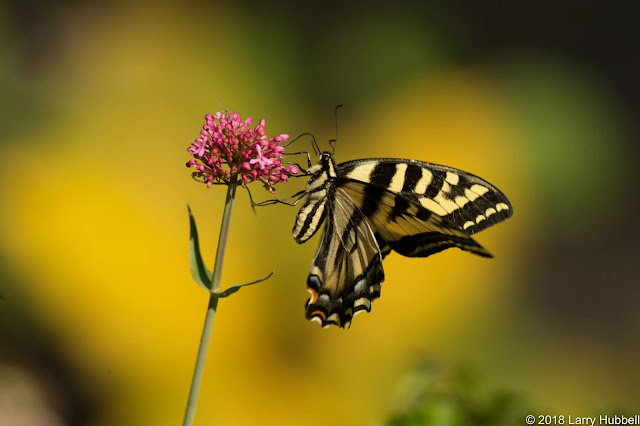 What are their names? Are they native to Union Bay?