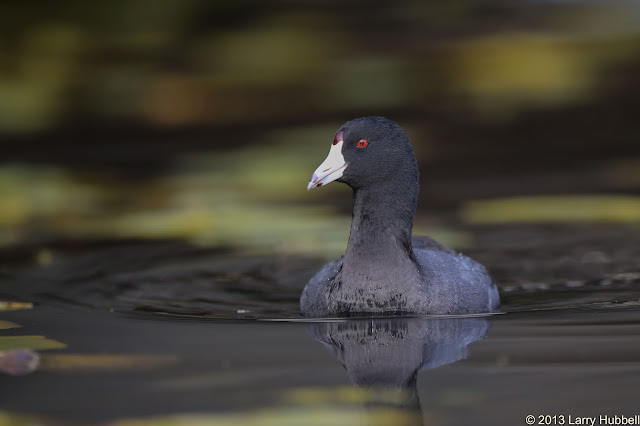 American Coots may dive like ducks, eat like ducks and mingle with ducks but technically - they are not ducks. 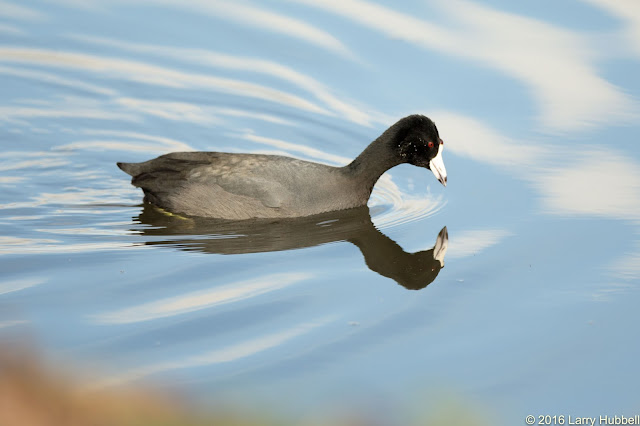 Still they are such a strangely unique species of waterfowl that the term 'odd duck' seems appropriate. (Can you guess which member of the coot's family hides among the cattails?) 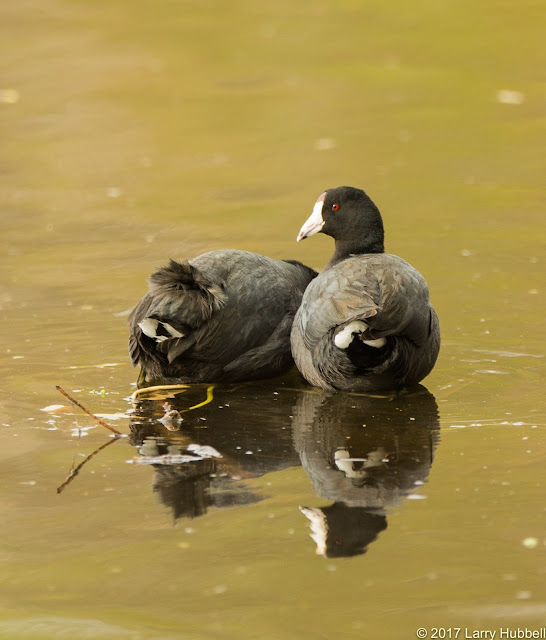 I think a coot's sole claim to beauty resides in their eyes. Their smoldering irises are almost irresistible, especially when set off by the general plainness of their plumage. 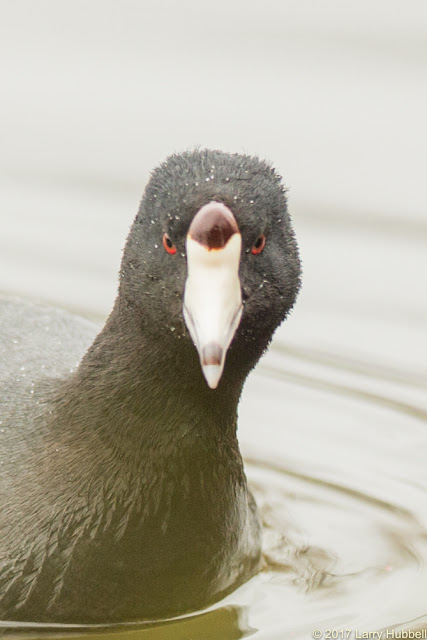 It seems unlikely to me that female coots are using beauty as a basis for selecting their mates. Although, I guess their idea of beauty might differ from mine. I wonder if that red patch above the bill is considered a beauty mark. Whatever their criteria, it is hard to argue with their success.

This photo shows just a small portion of the coots which can be seen on Union Bay. In the winter, there can be literally thousands of birds. 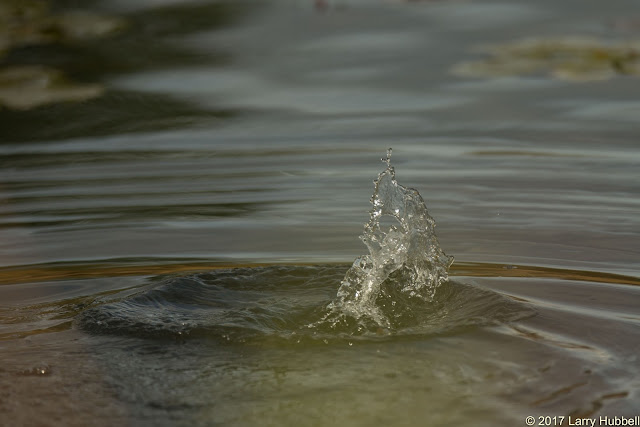 Coots often dive for food and, compared to pied-billed grebes, they seem more likely to make a splash when they descend. 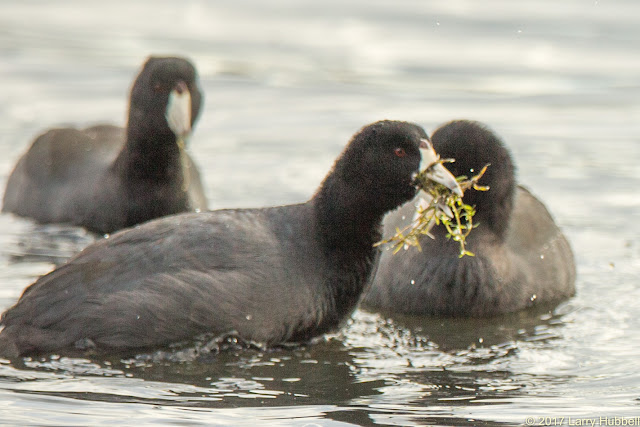 More often than not, coots are successful at finding aquatic plants. Our widespread infestation of eurasian milfoil provides our wintering coots with a nearly endless supply of food.

Also, I think it is surprising how dry coots can look when they come to the surface. They must have exceptional oils which repel the water with amazing efficiency. 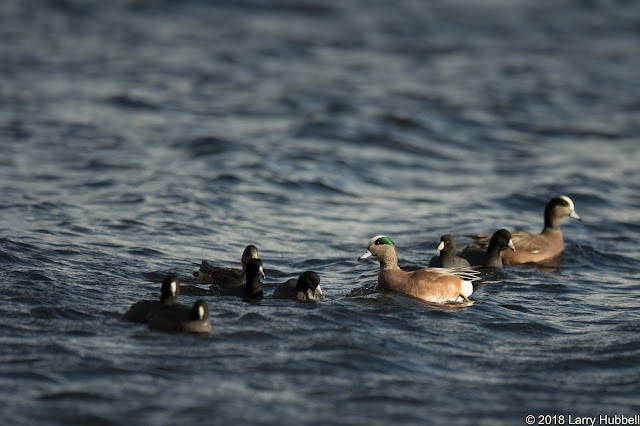 Coots are so successful at bringing up milfoil that American Wigeons, who are dabblers and not divers, simply hang around and steal from the smaller coots. 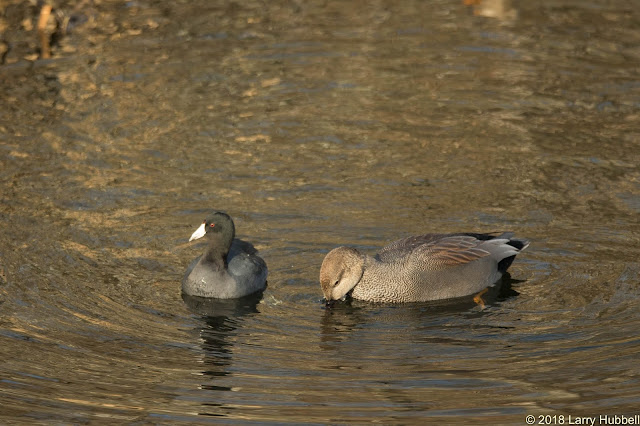 In our Master Birder Class, Dennis Paulson explained that the term for this behavior is kleptoparasitism. Gadwalls, like the one in this photo, also steal food from the coots. 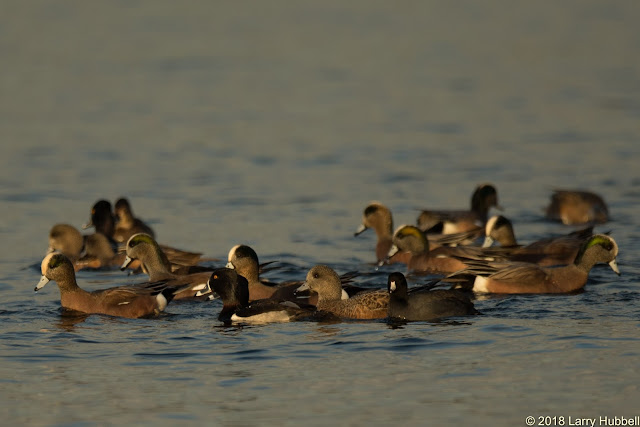 Occasionally, coots will try to paddle or even run away from the wigeons but I don't remember seeing them get frustrated enough to actually try and fly. The coots generally just take another dive and find some more food. I believe Dennis suggested that since wigeons are always watching for potential predators, like bald eagles, the coots may also benefit from the 'relationship'. 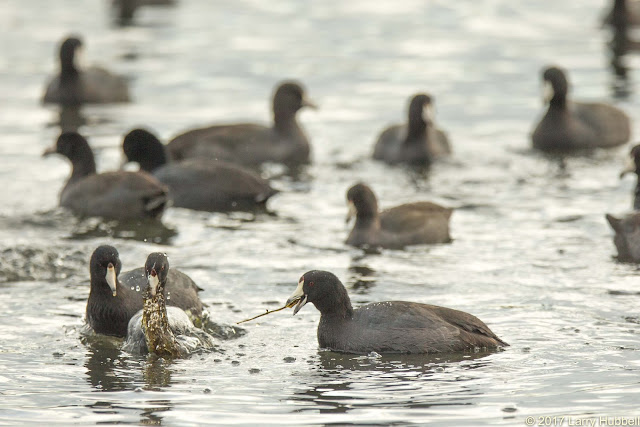 I have also noticed that a lot of theft goes on even when there are only coots present. They steal from each other just like the wigeons steal from them. Apparently, there is no honor among avian thieves.

When coots sense danger, they often take off running across the water.

Sometimes this becomes a prelude to flying and other times, once they feel safe, they simply settle back down. I suspect they lack the wing strength to abruptly take off from the water like a duck.

One moment a raft of coots can be quite calm and easy to see...

...but once they are startled their propensity to run and splash increases confusion and makes it harder for predators to pick out any particular bird.

I have watched bald eagles, flying ten feet off the water, heading directly for a raft of coots. I have seen the coots split into two splashing groups, half running to the left and half to the right. They circle away until they are finally airborne.  As the eagle passes over their original location both sets of coots are equal distant from the eagle and headed in the opposite direction. Without the slightest hesitation the coots complete a full circle and land precisely where they started, while the eagle proceeds on and disappears in the distance. The whole process happens with the precision of two interlocking gears rotating in opposite directions. 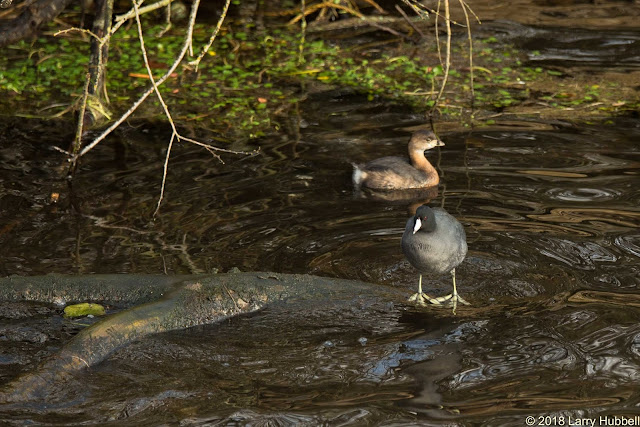 Another odd thing about coots are their lobed toes. Each toe is flat and wide but not at all webbed like a duck's foot. It also seems to me that coots may be heavier than they appear. I think this coot looks like it is similar in size to the pied-billed grebe behind it. In reality they often weigh fifty percent more than pied-billed grebes. Coots can be closer in weight to birds which I usually think of as being one size larger, like Wood Ducks and Hooded Mergansers. If coots are more dense than most ducks, I wonder if the extra density might help them to be more efficient divers. 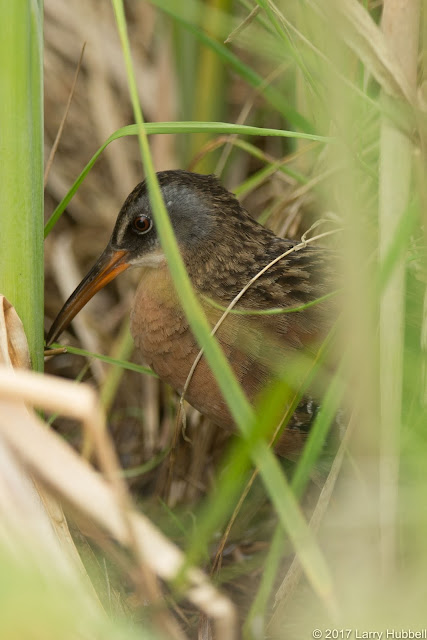 Coots actually belong to the Rallidae family, even though they behave a lot more like diving ducks than like their slender relative the Virginia Rail. 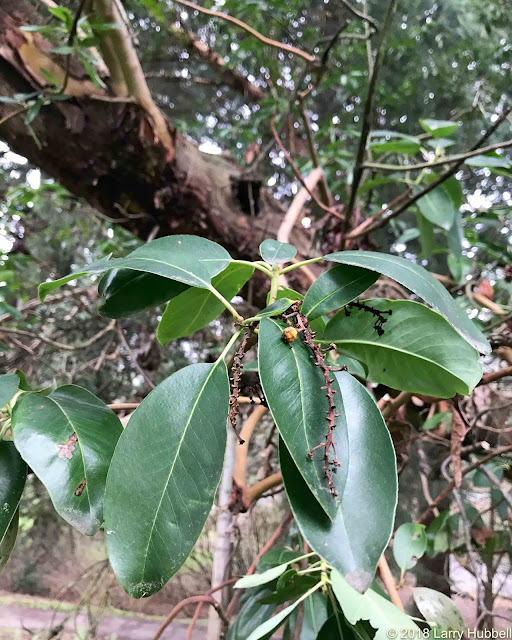 These leaves belong to what type of tree? Is it a Pacific Northwest native? 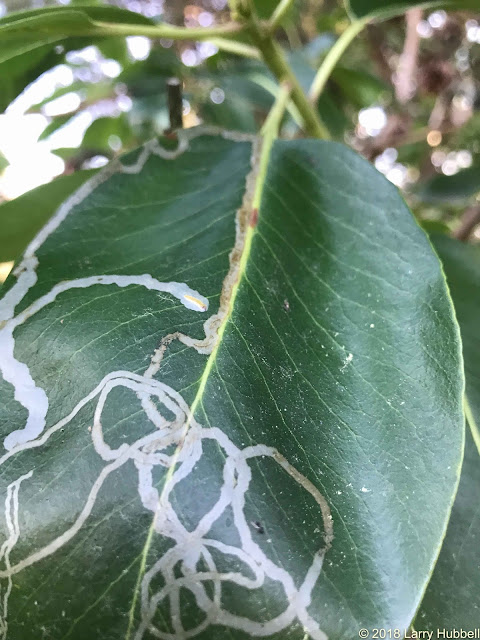 These tracks in the leaves of the same tree are made by what creature?


Scroll down to see the answers!

A. The Pacific Madrone is our only native broad-leafed, evergreen tree. It is one of my favorite trees due to its wide variety of bark colors and year-round foliage. Curiously, the leaves are generally smooth edged but occasionally sawtoothed. In the book 'Northwest Trees' the authors, Arno & Hammerly, explain that the sawtoothed edges occur during vigorous growth of young leaves.

B. The Madrona Leafminer develops into a small moth. The larval stage leaves long sinuous pathways on occasional leaves. David Zuckerman, Manager of Horticulture for the UWBG, says the leaf miner does not do any significant harm to the trees. So far, I cannot find any photos of an adult leaf miner, so I guess we will just have to use our collective imagination.

Posted by Larry Hubbell at 1:35 PM