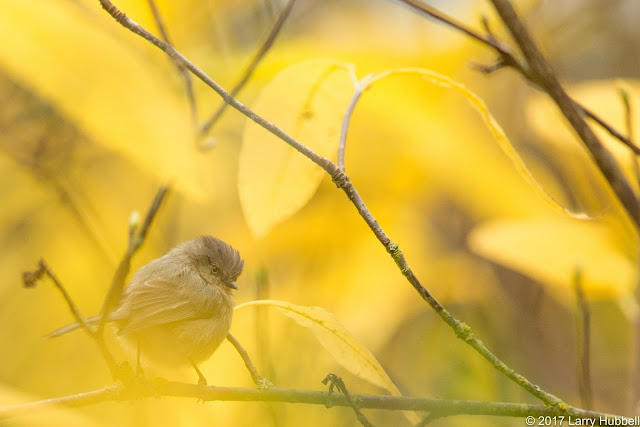 A Female Bushtit in an Indian Plum

I was heading home for lunch, after a morning of birdwatching in the Arboretum, when my eye caught a flicker of motion among the fading leaves of an Indian Plum. Silently searching between the twigs was a tiny, grey-brown Bushtit.

Bushtits are gentle and unassuming. They do not wear the flashy yellow colors of warblers. Nor do they have the reflective red brilliance and repulsive egos of a male Anna's Hummingbird. I have also never seen Bushtits attack each other, or their neighbors, in the manner of Crows. (Click Here to see Crows fighting.) 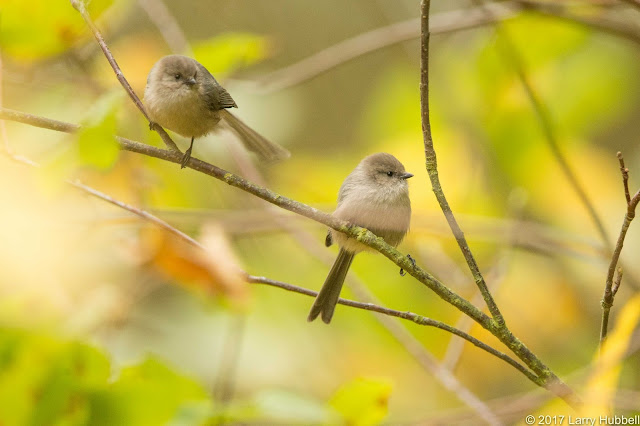 Two Male Bushtits sharing a branch. Can you spot the difference between these males and the female in the prior photo?

I was not surprised to find multiple Bushtits in the area. Bushtits seem to share everything -  their feeding locations, their roosting spots, their nests and even parenting. Anytime you spot one Bushtit you can expect that there are more close by. 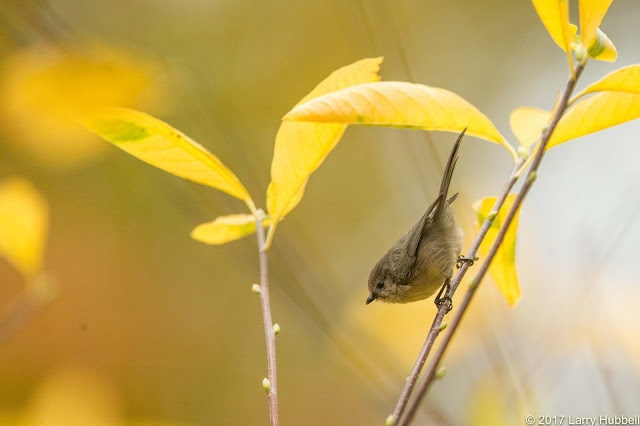 It was lucky for me that the bushtits were in an Indian Plum, which are considered a shrub or at most a small tree. Given the plant's short stature, the Bushtits were right at eye level. Because it is October, many of the leaves have fallen, which made the birds easier to see and photograph. In addition, most of the remaining leaves were wearing a delicate shade of yellow which provided a nice background glow for the photos. 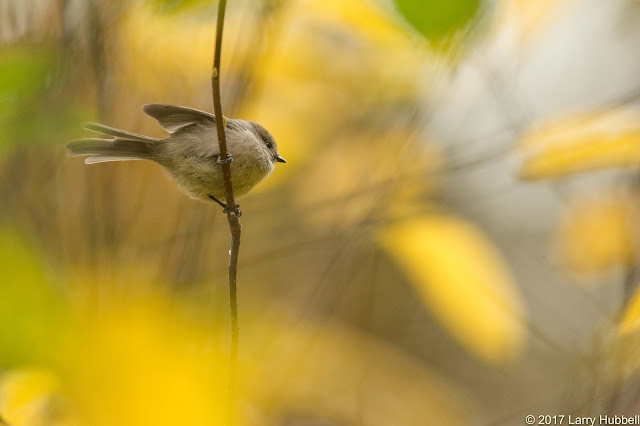 I soon realized that I had been fortunate in another fashion. I was standing directly in the path of the hard-working little flock. For the next 10 minutes, as soon as one or two bushtits would fly up into the tree above my head, three or four more would come in from the opposite direction. The whole flock must have worked their way through the Indian Plum before moving on. 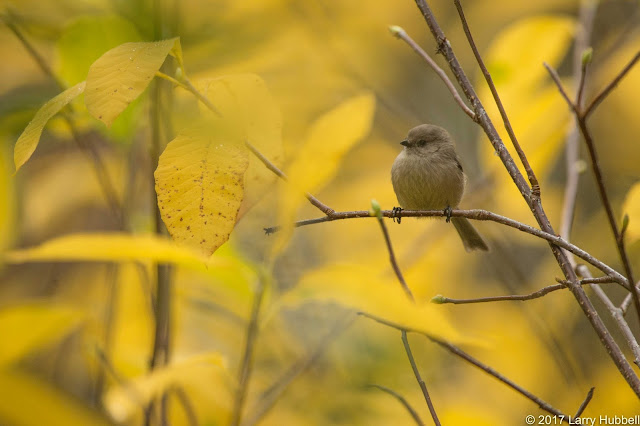 A few of the Bushtits sat for a moment or two, which for them, is a very long break. 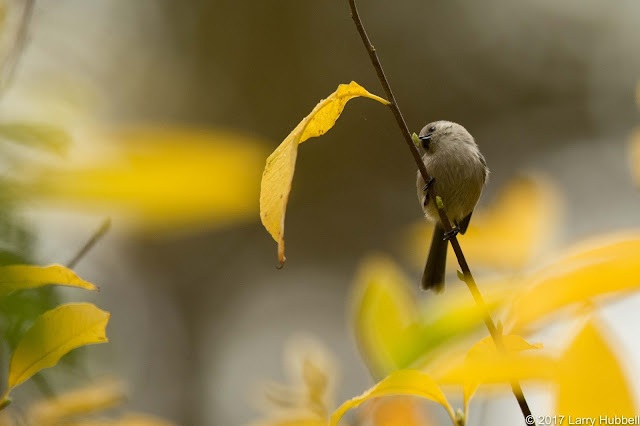 Generally, they are virtually nonstop in their search for food. Birds of North America (citation below) implies that at 68 degrees Farenhiet, Bushtits need to eat eighty percent of their body weight every day. It is a good thing that Bushtit parents sometimes have helpers at the nest, otherwise, how could they possibly provide enough food for themselves and for their offspring. 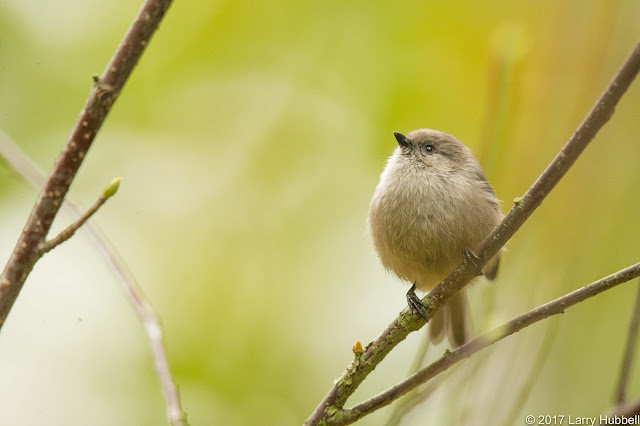 I often loose track of Bushtit flocks. While the others are moving on, I am consistently focused on the last little bird. When the 'slowpoke' darts away, faster than I can track, I am often left turning in circles while searching the empty branches of nearby trees. It does not help that I can no longer hear most of their high pitched calls. 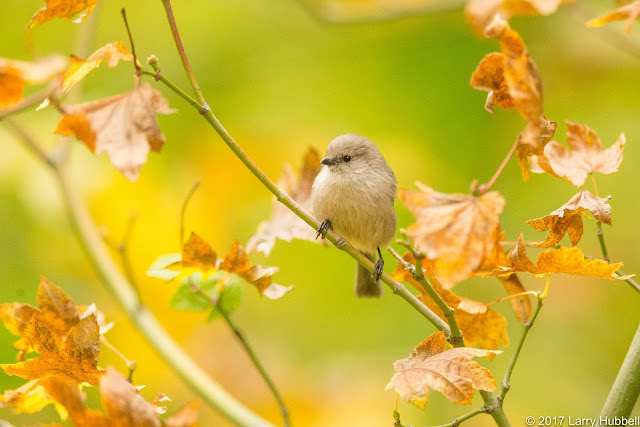 This week I made more of an effort to spilt my focus between the progress of the flock and the most photogenic individuals. This enabled me to tag along behind as they darted and  dashed from one tree to the next. 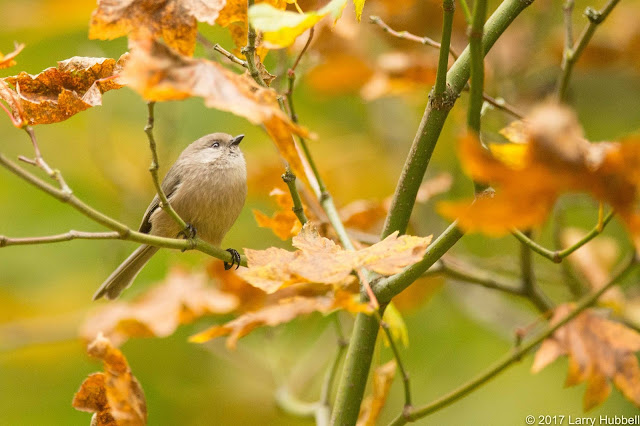 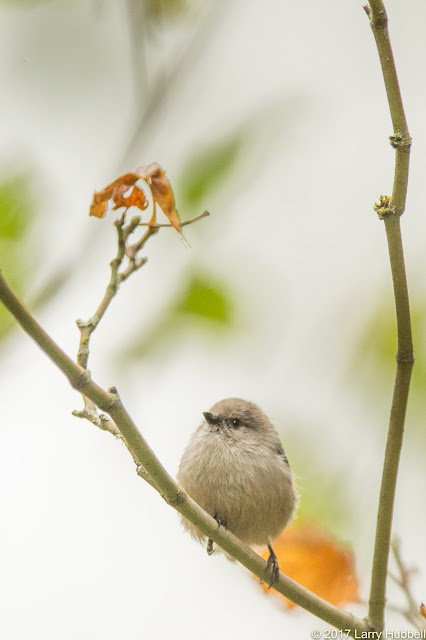 While individually the Bushtits appeared to move randomly, the flock as a whole moved as unit. On some trees they barely stopped, while on others they flickered about from branch to branch while thoroughly harvesting the insect bounty. I began to wonder if their flocks have leaders. 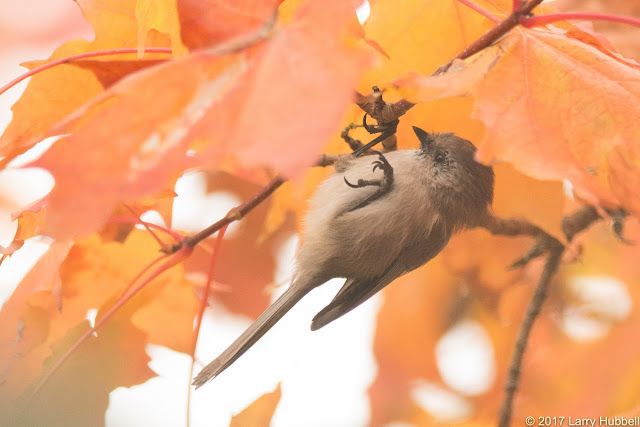 I really like this side view of a Bushtit's talons. Even though it would take a half a dozen Bushtit's to weigh more than an ounce, the deadly curvature of the claw makes it clear that they are the distant descendants of dinosaurs. I wonder if there were mild-mannered dinosaurs. 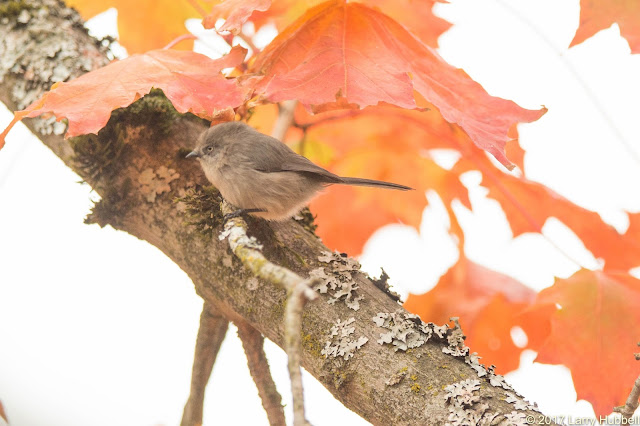 The female's have a light colored iris, the males do not.

While thinking about the concept of a leader, I concluded Bushtits probably don't have just one. I am guessing their constant calls tell the trailing members where the flock is at. I suspect the birds in the lead change depending who spots the next most promising tree and which bird is the first to consume all of their currently available food. Those in the lead find food first, but they are also at risk of being found first - by predators.

The birds in the center of the flock are more likely to be warned by distress calls when the birds at the edge come under attack. Being part of a flock, with rotating roles and dozens of eyes and ears, can certainly help mitigate the individual risk while also helping the group as a whole to survive.

This train of thought caused me to realize, that it is not really leadership which enables a high functioning flock, it is actually communication. It made me wonder, will it someday be possible for human communications to supersede our need for leaders. I really don't have any idea how such a society would function. However, if we look at Bushtits as roles models there are a few things which appear certain. Bushtits share almost everything - from danger to parenting responsibilities. They appear to all be treated equally. I have never noticed them arguing over territories, nest sites or mates, apparently, they have no egos. We could do worse for role models.

Have a great day on Union Bay...where Bushtits thrive in the city!

Without a well-funded Environmental Protection Agency, it falls to each of us to be ever more vigilant in protecting our local environments. Native plants and trees encourage the largest diversity of lifeforms because of their long intertwined history with local, native creatures. I have been told that even the microbes in the soil are native to each local landscape. My hope is that we can inspire ourselves, our neighbors and local businesses to plant native flora and to support native wildlife at every opportunity. My intention is to include at least one photo each week and visually challenge us to know the difference between native and non-native lifeforms. Can you identify this creature? Is it native to Union Bay? 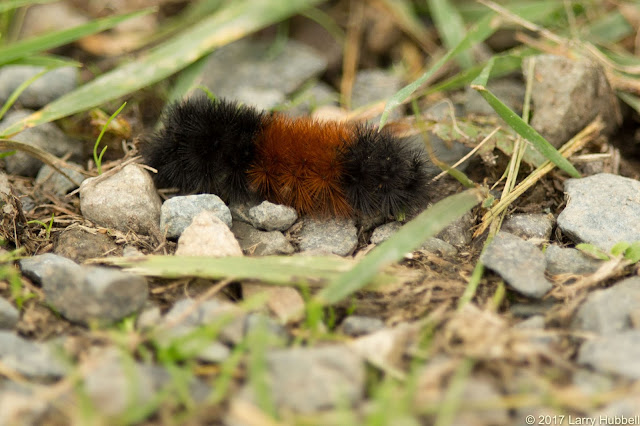 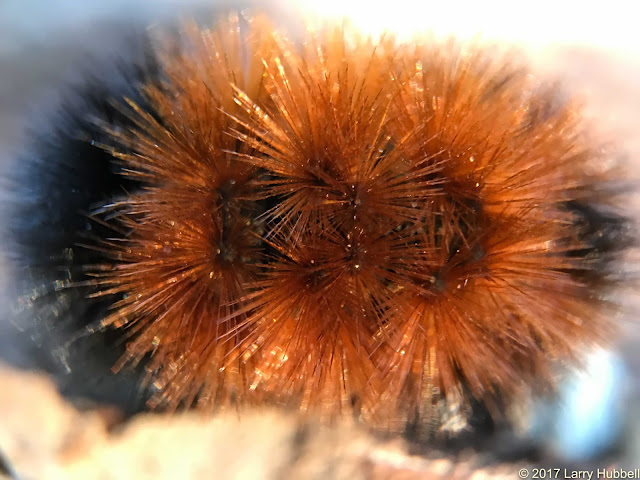 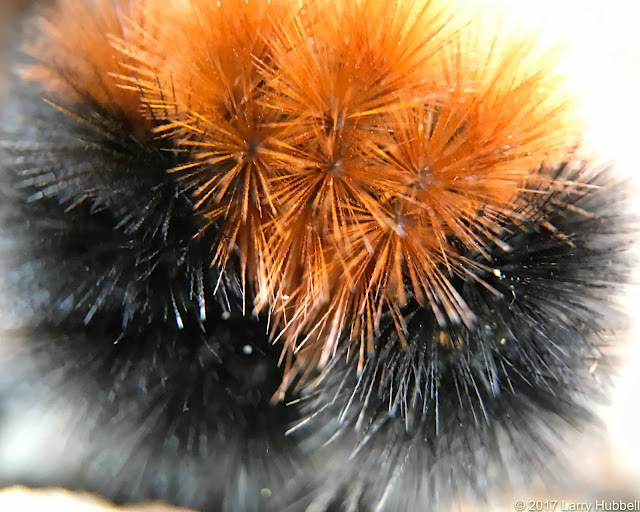 The photos are all of Banded Woolly Bears (BWB). This week I tried doing a close up which turned out to be less interesting than I expected. On the other hand, my research into the creature turned out to be more interesting than I expected. Did you know they can survive being frozen? Do you know what creature they become when they grow up? Here are three different links, each explains a slightly different perspective on this fascinating creature.

The University of Alberta

Butterflies and Moths of North America