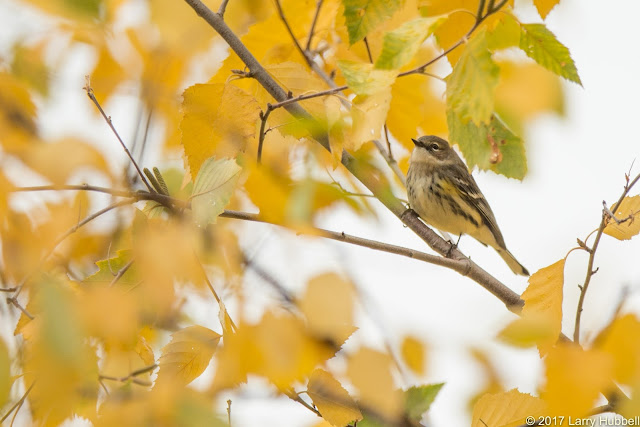 Every season has its moments. In the fall, I particularly love finding migrating warblers feeding among the autumn leaves. 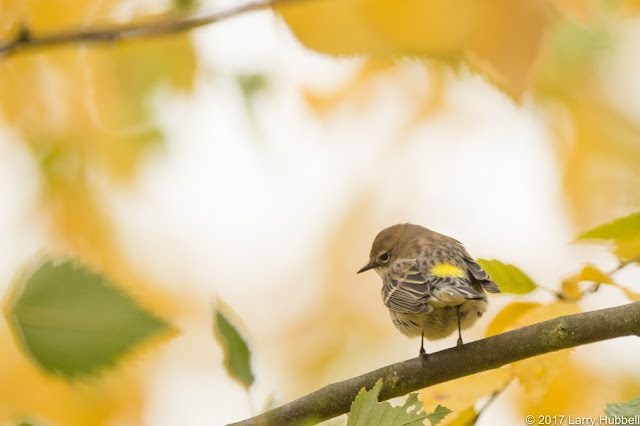 It is especially helpful when the bird's appearance practically shouts its name. It seems rather obvious that the only logical appellation for this little creature is a Yellow-rumped Warbler. 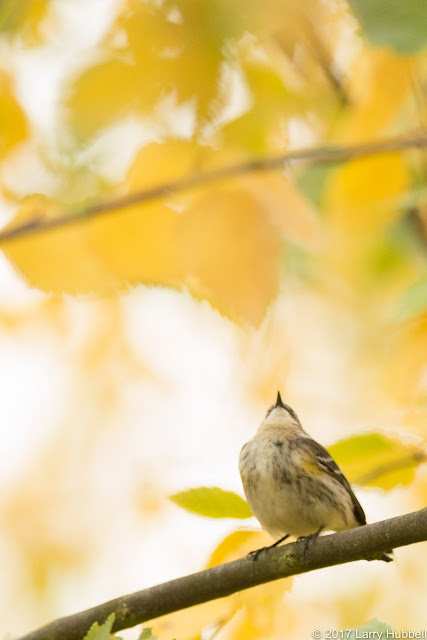 During the grey wet days of fall, spotting birds with splashes of yellow, flashing and feeding among golden leaves is like a tonic for the soul. 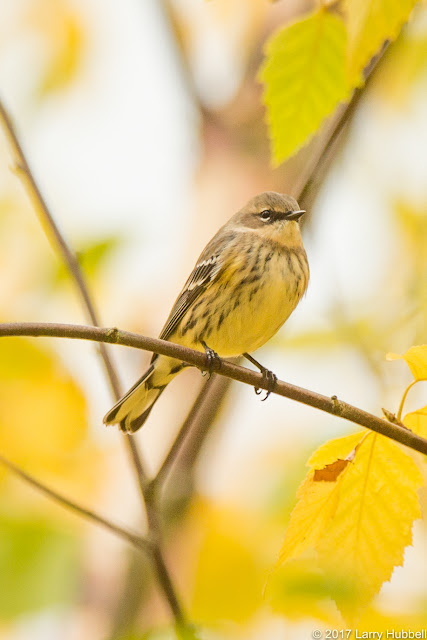 From an identification perspective, trying to determine whether a bird's throat is yellow or white, while it sits among a thousand golden reflections, can be challenging. You might ask, Why do we care?

It turns out that there are two different subspecies of the Yellow-rumped Warbler and the most obvious distinguishing feature is usually a yellow throat patch versus a white one. However, in addition to the color, the shape of the pale throat patch is also helpful. The fact that the patch extends significantly back beyond the eye indicates that this is one of the white-throated Myrtle variety rather than the yellow-throated Audubon's subspecies. If we step back to September, before the bulk of the leaves turned yellow, we see a Yellow-rumped Warbler who's throat patch looks pretty white. There are however at least two other differences when we compare this bird's head with the one in the previous photo. This bird has no eyestripe and the coloring of the pale throat patch stops immediately below the eye. This allows us to identify this bird as a member of the Audubon's subspecies.

At this point you might be feeling a bit confused. I mentioned earlier the Audubon's normally has a yellow throat patch. I suspect this may be a young bird who has not yet fully developed all of its yellow coloring. Also, the lighting could be playing a factor. Plus, it turns out that in our area both subspecies exist and they can intermingle. This occasionally causes overlap in their characteristics.

The proliferation of possibilities in nature can be bewildering. To assist my aging memory I love any little visual tricks. Here is an example: 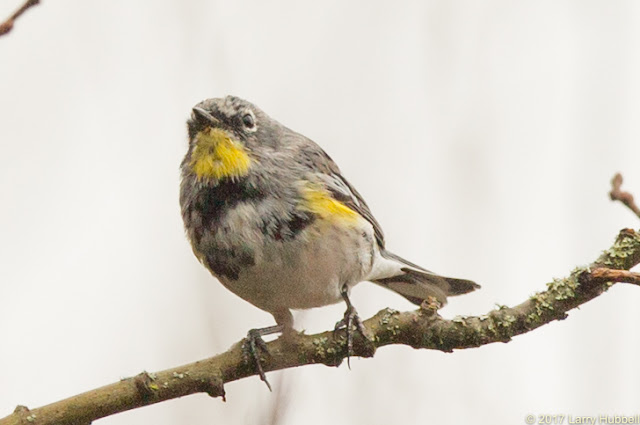 In the case of a male Yellow-rumped Warbler, in breeding plumage the difference is very apparent. A narrow yellow throat patch signifies this bird is a member of the Audubon's subspecies. 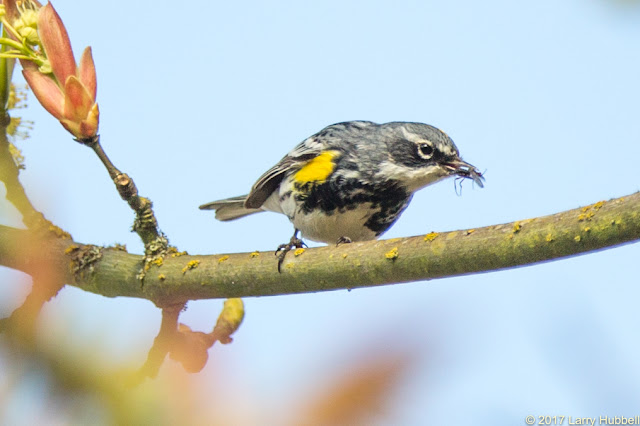 On the other hand, a wide white throat patch, along with the obvious eyestripe, tells us this bird belongs to the Myrtle subspecies. 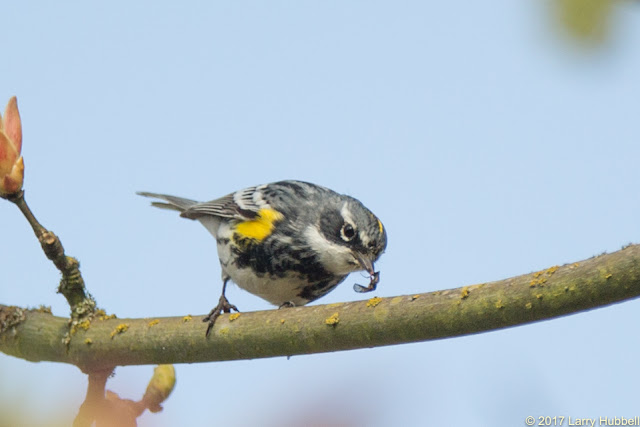 I have had a lot less luck identifying the insect. Although I do believe it had wings before it was turned into the warbler equivalent of mashed potatoes. 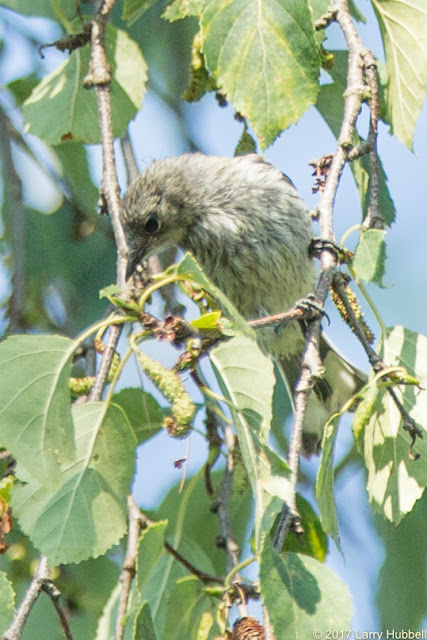 I still struggle with seeing the differences between the females and the young birds. I think this might be a young Audubon's, in this August photo. I think it is an Audubon's primarily because the throat patch appears to be narrow and I do not see an eyestripe. I suspect it is young because in general young birds often have a more muddled and less distinct color pattern. 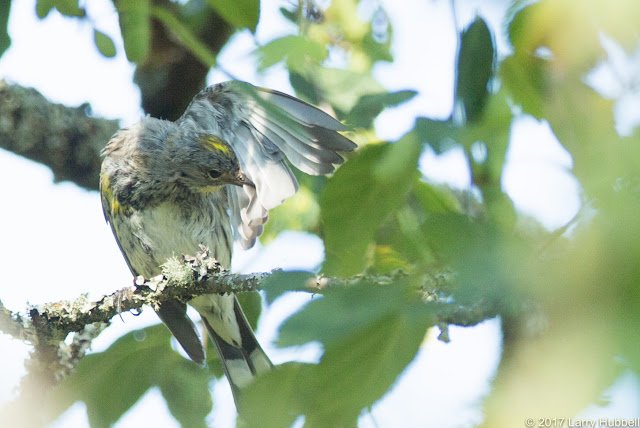 I believe this photo is of a different bird because the coloring on the breast looks more clearly defined, even though the photo was taken just a minute later. I believe the yellow on the top of the head indicates the bird is male. 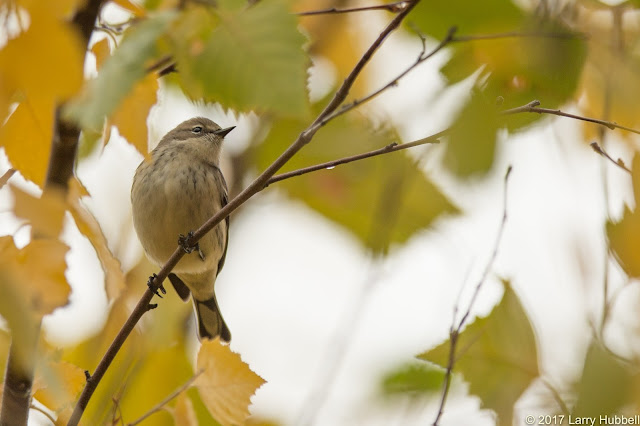 Here, the wide white throat patch and the eyestripe indicate the bird belongs to the Myrtle subspecies. 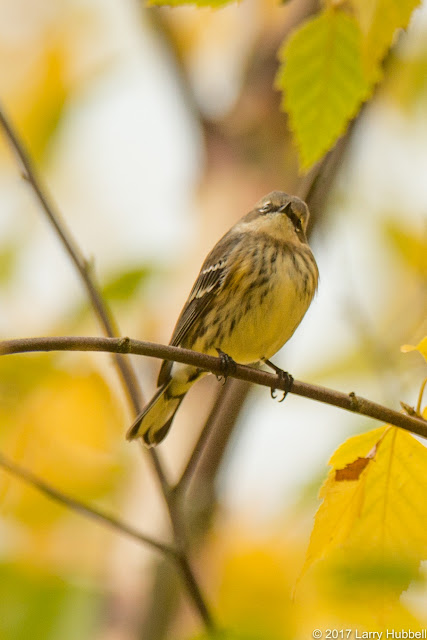 The angle, the lighting, the gender, the plumage changes and individual variation can all still cause me to question my conclusions. Nonetheless, I always enjoy the process of observation, particularly when the yellow leaves appear to be temporarily reflecting the last remnants of our summer sunshine.

Without a well-funded Environmental Protection Agency, it falls to each of us to be ever more vigilant in protecting our local environments. Native plants and trees encourage the largest diversity of lifeforms because of their long intertwined history with local, native creatures. I have been told that even the microbes in the soil are native to each local landscape. My hope is that we can inspire ourselves, our neighbors and local businesses to plant native flora and to support native wildlife at every opportunity. My intention is to include at least one photo each week and visually challenge us to know the difference between native and non-native lifeforms. Can you identify these trees by their leaves? Are they Union Bay natives? 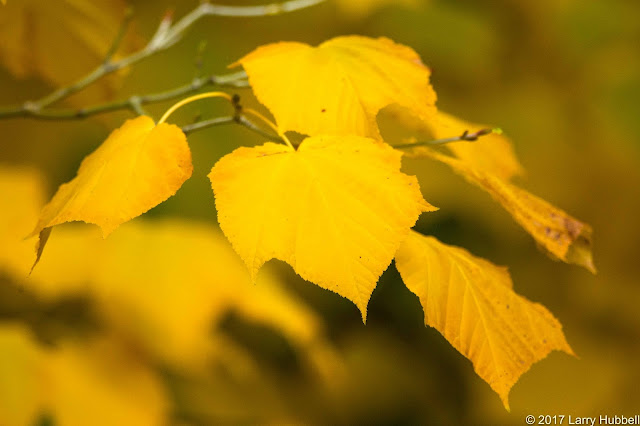 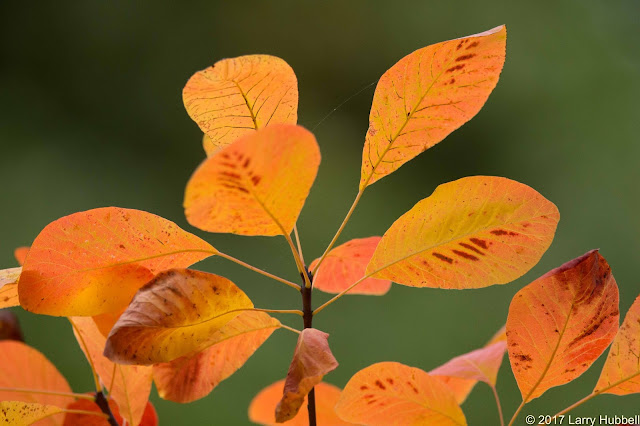 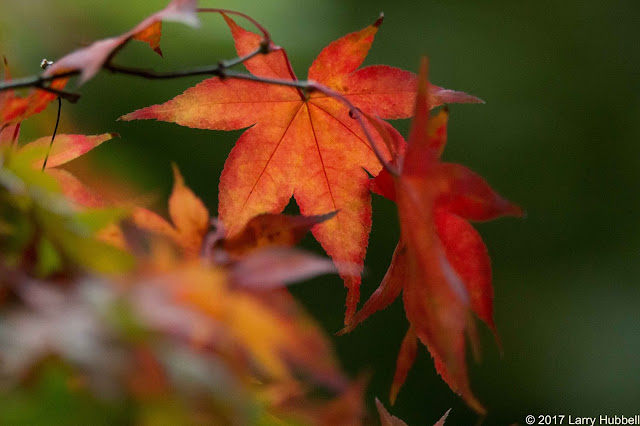 None of these trees are native to Union Bay or the Pacific Northwest. Nonetheless, their fall colors made them irresistible. I hope you enjoyed them!

Posted by Larry Hubbell at 1:32 PM