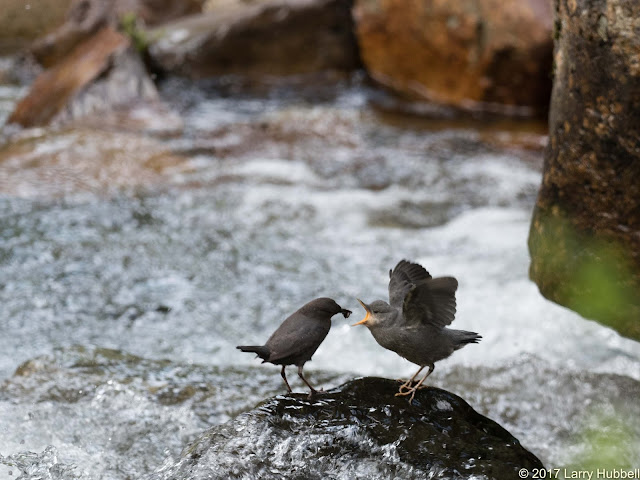 On Friday, above Snoqualmie Pass, this young bird begged for food. Did you notice how the yellow gape of the youngster provides a target for the parent.

Today, we call this species the American Dipper. I find this official name functional and appropriate. Dipper, describes the manner in which this species is almost constantly moving. They dip and dive below the surface of the churning white water while searching for food. They continue to flex their legs and dip their bodies anytime they momentarily stand on a rock, log, or shore. It is quite likely that any English-speaking person upon seeing this bird for the first time might call it a dipper. On the other hand, the name is not nearly as mysterious and musical as ouzel.

In John Muir's writing, he, and others, referred to these birds as water-ouzels. No doubt this originated because our North American species behaves similarly to the european water-ouzel or dipper. 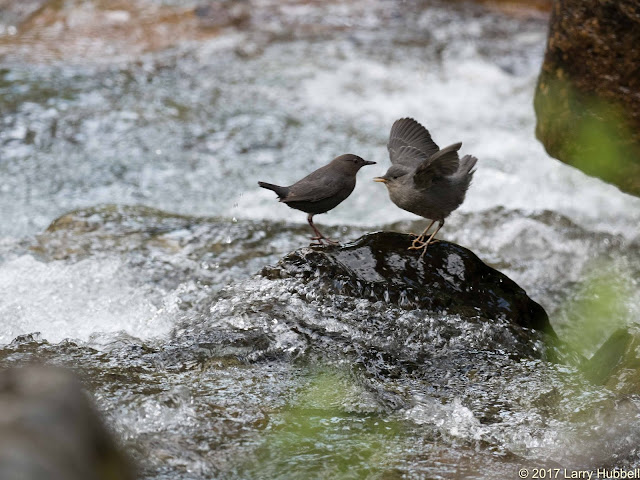 John Muir's lengthy observations and poetic descriptions of this species' behavior are eloquent and beautiful. He clearly loved and respected water-ouzels. Mr. Muir stated, "The Ouzel alone of all birds dares to enter the white torrent. And though strictly terrestrial in structure, no other is so inseparably related to water, not even the duck, or the bold ocean albatross, or the stormy-petrel." You can read more of his work on the Sierra Club website.

The dipper's compact body, short tail, long strong toes, and powerful rounded wings are all adapted to searching for food while submerged underwater. This stream was filled with fresh snowmelt, only just slightly above freezing. Neither the cold, nor the force of the fast falling water deterred the dippers. I doubt any other species of North American bird would feed its young on a wet rock in the middle of such a cold, cascading, stream. 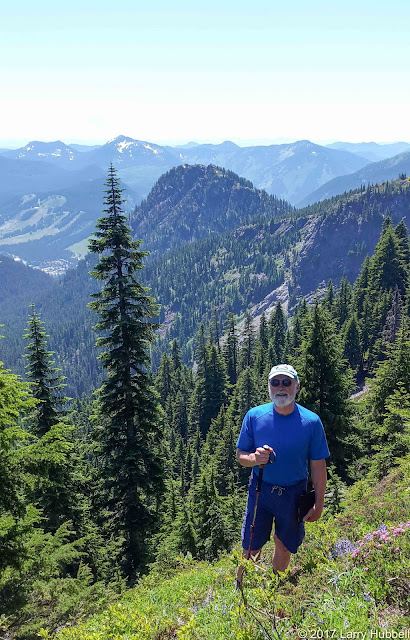 The day before, my friend Dave Galvin led us up above Red Pass. Dave is a man of many passions. I met Dave last fall when we both began the Seattle Audubon's Master Birder class. Last summer, Dave biked from the Pacific to the Atlantic ocean. (Click Here to read about the 5000 mile trip.) During the winter Dave likes to snowshoe and often ends up on top of Guye Peak - which is the symmetrical peak behind Dave. Dave also maintains the forest around the Sahalie Ski Club which is located on the south side of the peak.

Note: In the photo above, the light green meadows laying low in the distance are the Snoqualmie ski slopes. 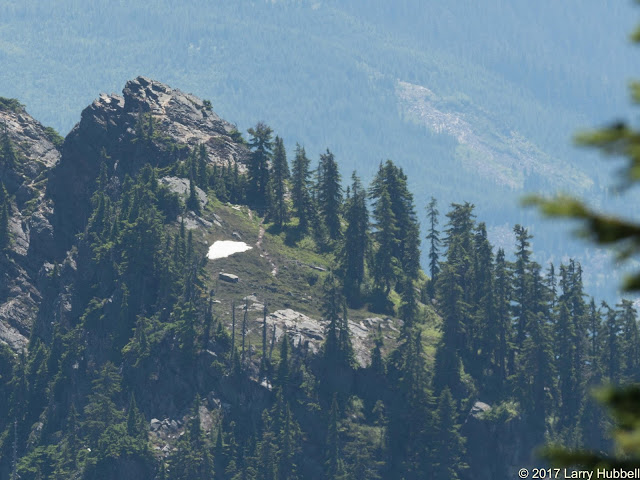 At approximately 5000', there was only one small patch of snow left on the north side of Guye Peak. 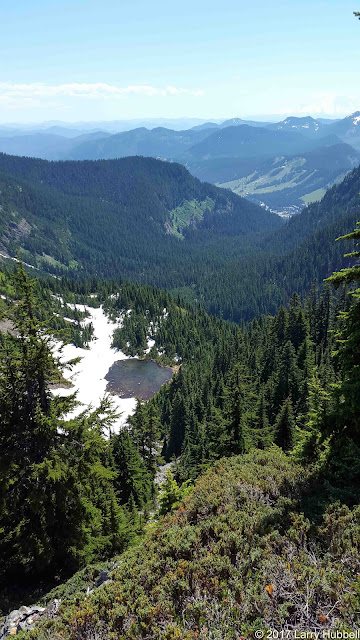 From Red Pass we also looked down on our camp, just to the right of the 'puddle' of melted snow. 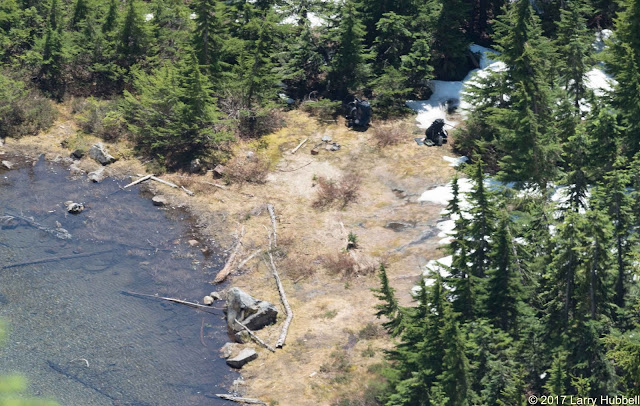 Given the dampness of the ground Dave suggested it had only been a few days since our campsite was completely covered in snow. It was quite clear where the water to feed the cold cascading streams was coming from.

It was less obvious where the water was headed. The size, scope and complexity of watersheds make they difficult to fully comprehend. Watersheds include all land which drains into a particular body of water. Generally, they center around rivers. As a result, watersheds seldom match our governmental boundaries. In fact, we often use rivers as visible boundaries - like the Columbia River between Oregon and Washington.

By cutting watersheds into pieces, e.g. cities, counties and states, we make the responsibility for managing the impact of humans on water extremely challenging. In my dream world, watersheds would be the basis for our governing organizations. In this fantasy, watershed, world, Snoqualmie Pass would be near the intersection of three 'states'.

Just a mile or two southwest of Snoqualmie Pass, snow melts and flows into the Cedar River which in turn flows into Lake Washington. For the last 100 years, since the Montlake Cut was created, Lake Washington flows out through Union Bay and the Ballard Locks to Puget Sound. The same Cedar River also supplies our tap water in Seattle.

The primary difference in water quality between our tap water and the water in Union Bay is the unintended metropolitan pollutants, with combined-sewer-overflows(CSO) being a prime example. Follow the CSO link to get a look at the scope of the issue. 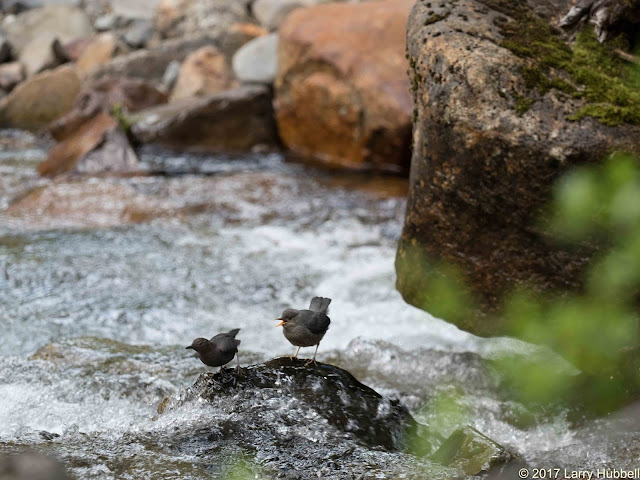 Back at the stream we watched as the adult slipped into the cold swift water, to search for food. In John Muir's day I believe dippers where just as common in lowland streams as they are today in our pristine mountain flows. 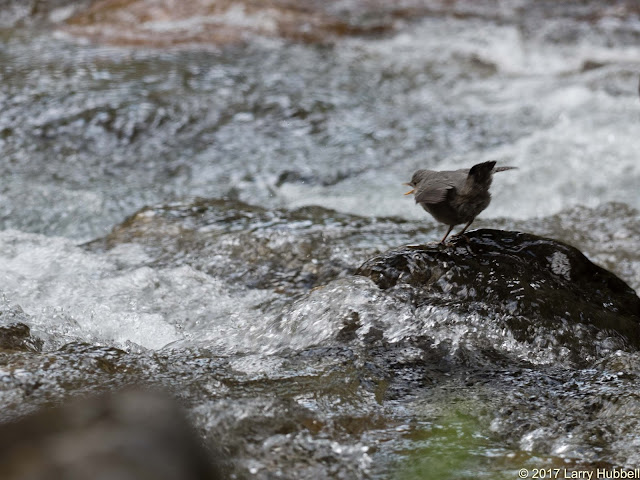 Temporarily hidden from view, the adult is searching below the surface directly in front of its offspring. It appeared that the young one was calling loudly for more food but I doubt any living creature, including its parent, could hear the call above the noise of the rushing water. 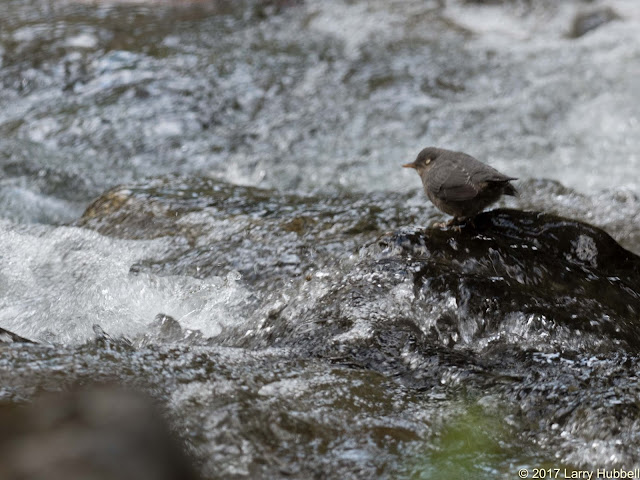 From what I can ascertain, the only contrasting color, other than their pale legs, on an adult dipper is the white of their eyelids. On young birds there does appear to be some white on the trailing edge of their wings. Most likely, these white tips wear away soon after they enter the water and begin searching for food on their own.

It seems to me that if the bio-region concept of Cascadia takes hold, the most appropriate 'regional bird' might be the water-ouzel. After all, it is apparently the only bird to feed, live, and reproduce, full-time, in the cascading streams of the mountains which are central to this region.

Note: The proposed bio-region of Cascadia, containing Oregon, Washington and British Columbia, would at least unite most of the Columbia River watershed into a single governmental entity.

If you happen to get away from the shores of Union Bay, I suggest searching for a fast flowing stream, the beautifully adapted water-ouzel, and the momentary flash of its bright, white eyelid.

In addition to his many other skills, Dave Galvin has also learned many of the native flowers which can be found soon after the snow melts in our Cascade Mountains. Here are a few examples. Do you know their names? 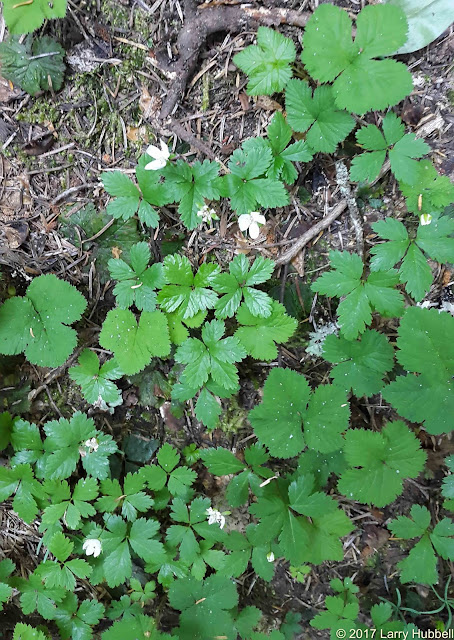 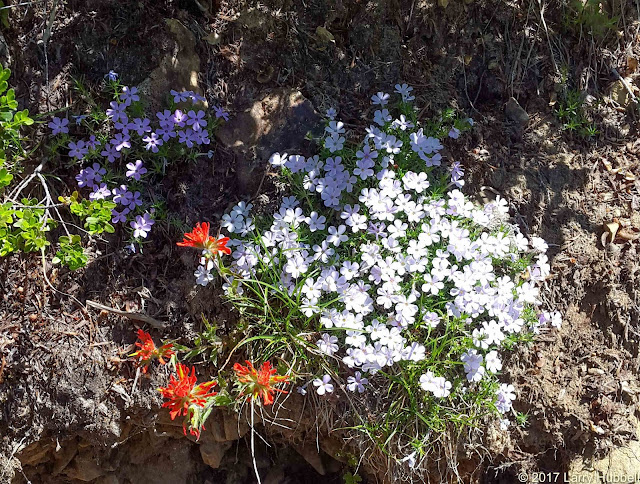 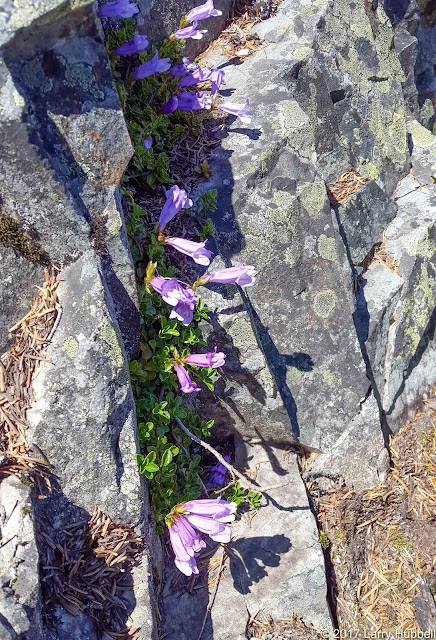 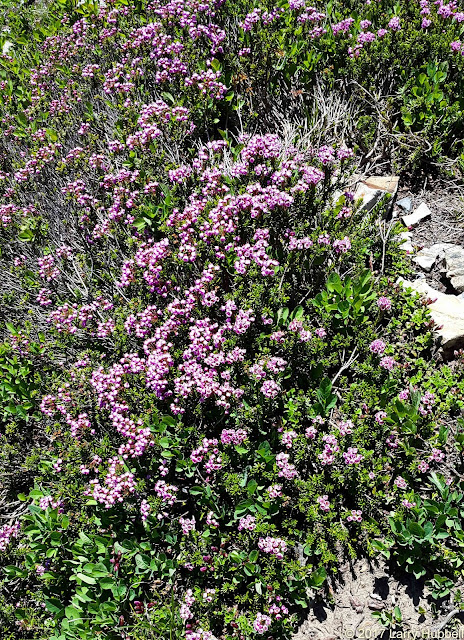 
I must preface the answers by saying I am relying on my hearing and note taking - both of which can be suspect - to relay Dave's names of these flowers. If there are any errors in the naming I am sure it is mine.

Posted by Larry Hubbell at 1:46 PM