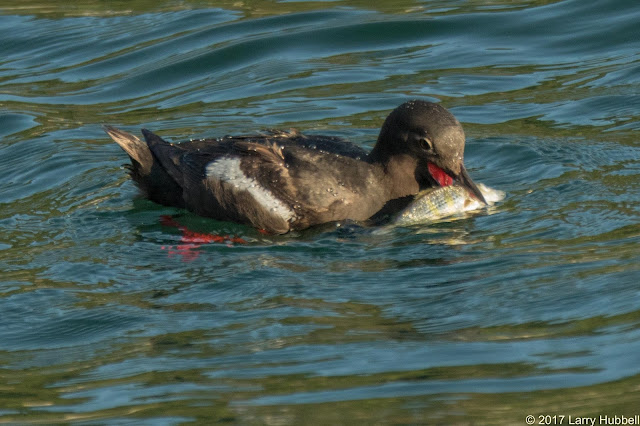 I started this week at Port Townsend with family and friends. Our annual trip to Fort Warden is one of the few times each year when I get to watch pigeon guillemots at work in the salt water of Puget Sound. 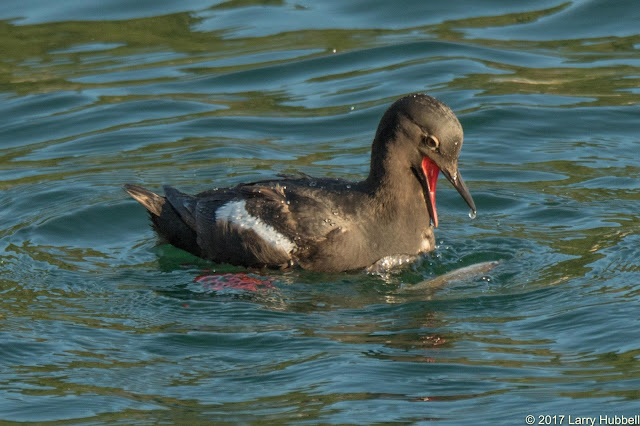 I have no idea why their mouths are red. 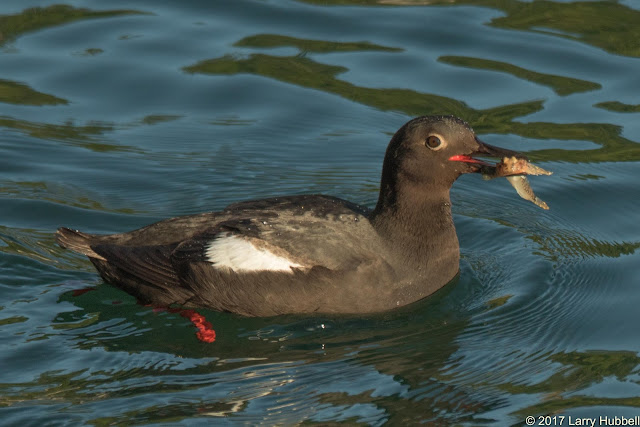 I also wonder why they have white wing patches and why their feet match their mouths. 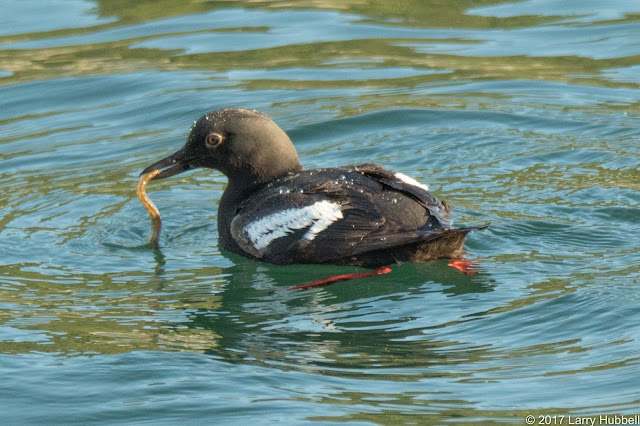 One thing is for sure, they are not dependent on a single species of fish for food. 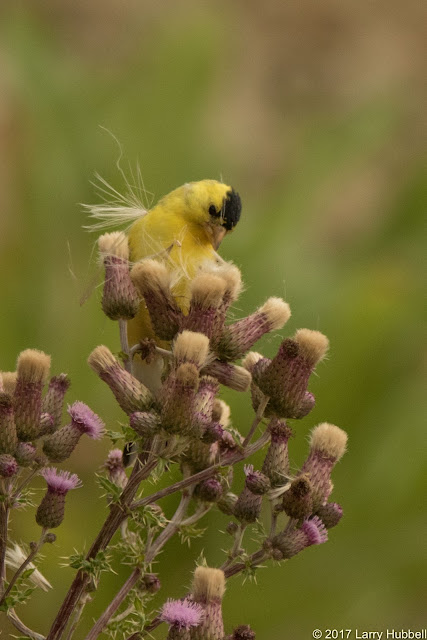 One hundred yards away I found goldfinches delicately feeding on thistle seeds. The mixture of purple and gold made me think of the University of Washington Huskies and Union Bay. 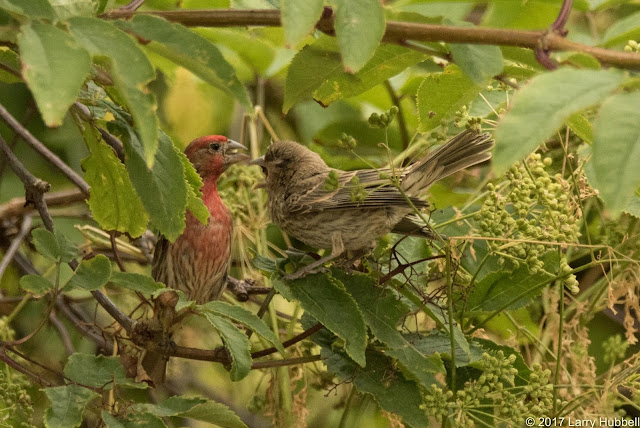 At the time it did not occur to me that the red house finch feeding its young should have made me think of the Cougar colors at Washington State. I must have been thoroughly inculcated while attending the University of Washington.

It was refreshing to see ravens in the distance and hear their deep croaking cries. While watching them, I heard a strange liquid call that reminded me of a drop of water falling into a puddle. The sound originated in the air and from the same direction as the ravens. I found it totally baffling.

Later, I used my phone to look up raven calls in my iBirdPro app. The last call they listed was described as hiccup-like. It is very similar to the sound I heard.

The only raven call I have found online which is similar is in the Macaulay Library. (Click Here and then select the second track down on the left side. You will need to turn up the volume and listen to the sounds played in the first second and a half.) The liquid-like sound is repeated three times very quickly. The sound has absolutely nothing in common with the 'normal' calls of a raven. I wonder what it means. 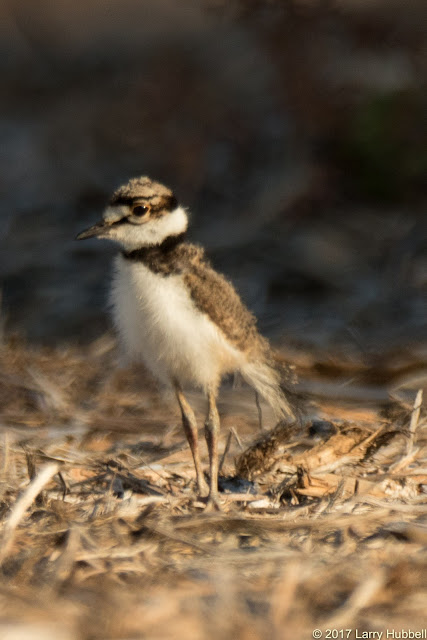 By mid-week we had returned home and I visited the Union Bay Natural Area (UBNA) with a couple of my classmates, Louis and Whitney. Whitney spotted this young killdeer. Anytime I looked away I had great difficulty in finding the small brown bird - especially when it remained perfectly still. 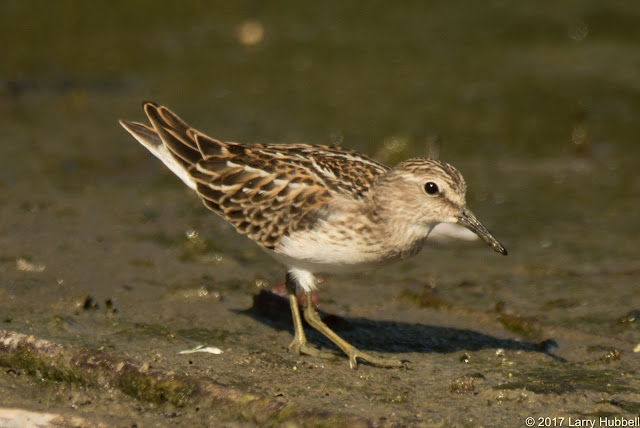 Louis found three different species of sandpipers on the shore of Main Pond. This Least Sandpiper (note the small yellow legs) was happy to feed right in front of us. While we were watching the shorebirds, Louis saw a merlin fly past at warp speed, and begin chasing swallows. The merlin's chances of catching one were similar to my odds of photographing the process. 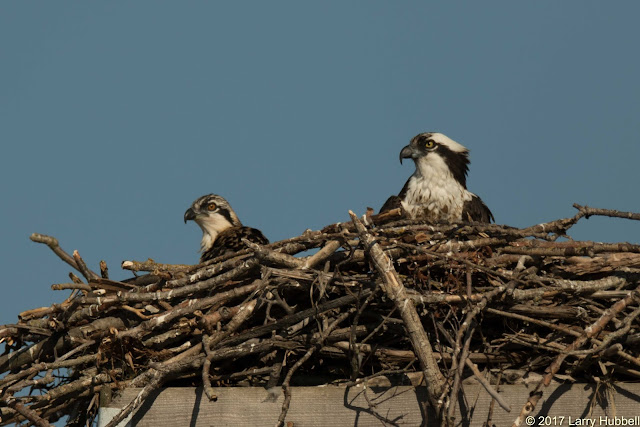 Our two young osprey (only one of the young is visible in this photo) in the UBNA nest seem to be gaining weight and growing just fine; although Chester does seem to be spending a lot more time away from the nest than he did last year. It makes me wonder if he is having to search for food in more distant locations.

Can you see the difference in the iris colors between Lacey and her offspring? 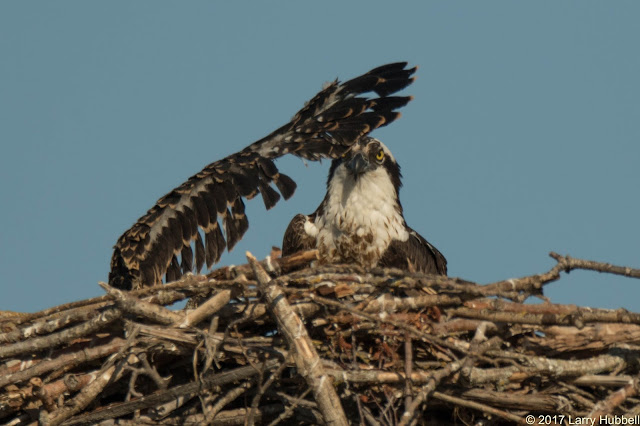 The wings of the young are certainly longer than I expected. Still, their flight feathers have a ways to go before they fill-in and are capable of holding air. You can Click Here to learn more about our local Union Bay osprey. 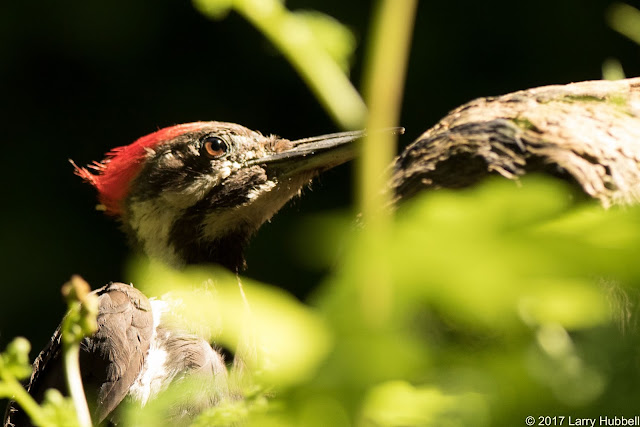 The next day in the Arboretum I caught up with Goldie. I took this photo of her iris, which for the first time that I remember looked slightly red, instead of her usual brown. I wonder if her eye color is starting to change or if it is just an artifact of a unique angle and lighting. 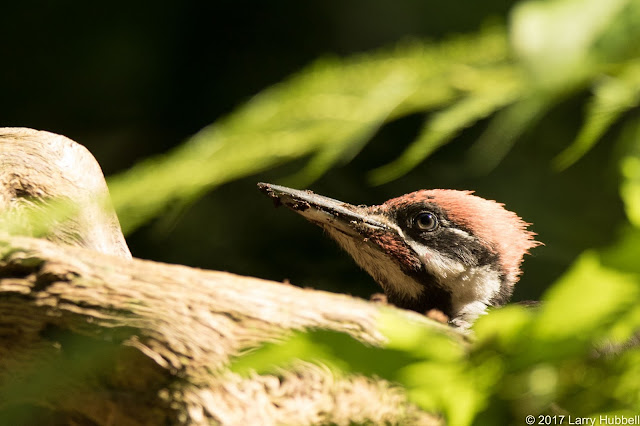 The young male following her around appeared to be Clark, the youngest male of her three 2017 young. His iris appears to be changing to yellow right on schedule. You can read about his story in  last month's post called, Elderberry Whine. 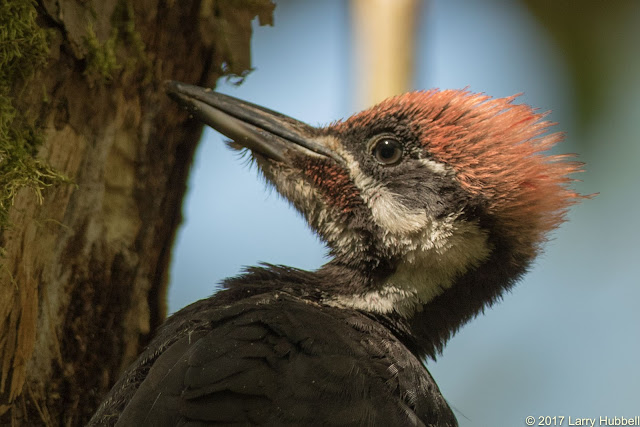 I believe his top knot will remain slightly orange for at least another month or so. 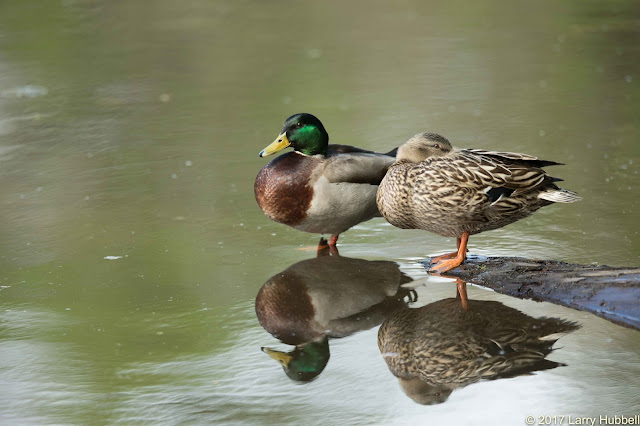 Surprisingly, adult male mallards also change colors or plumages every year around this time. In the Spring they have their classical green heads, white necklaces, brown chests and yellow beaks. This pattern makes them much easier to spot and identify when compared with female mallards. 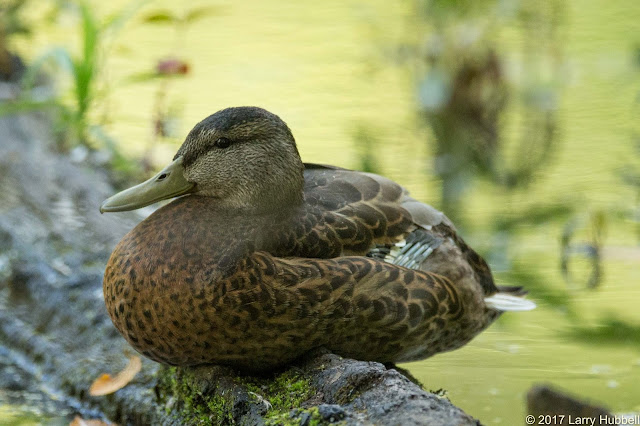 Here is a male in his summer outfit. Technically this is called his eclipse plumage. They switch to this more camouflaged coloring while growing new flight feathers. If you look closely you can see the tips of his new wing feathers just beginning to burst out of their light blue sheaths. At this time of year, they cannot fly and it is only their bills which enable us to easily identify their gender. 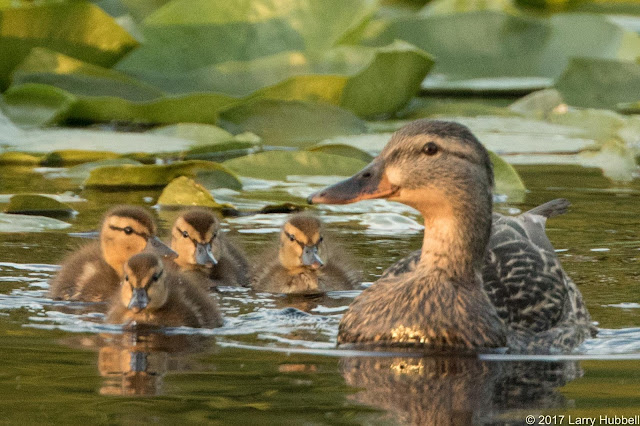 Females have orange edges on their bills... 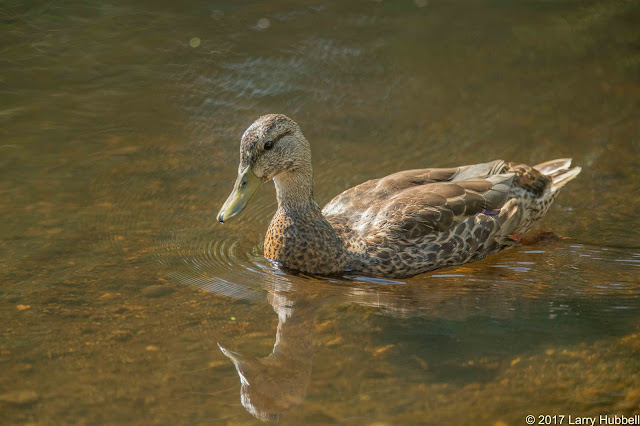 ...while males have a yellowish cast. 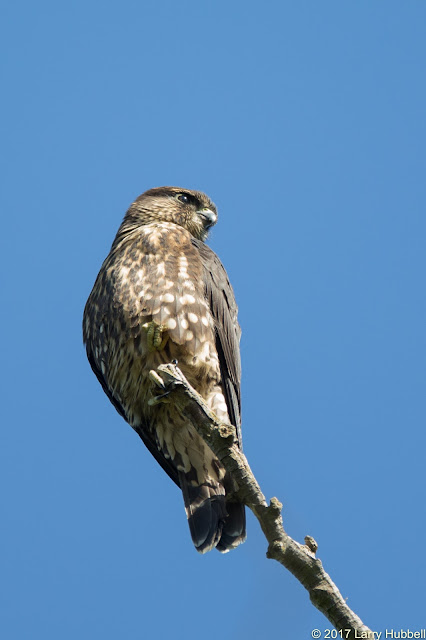 Toward the end of the day I thought I saw a merlin again. It was flying low and fast over the water and cattails. The next afternoon I finally got a photo, while the merlin was resting on a treetop over Duck Bay. 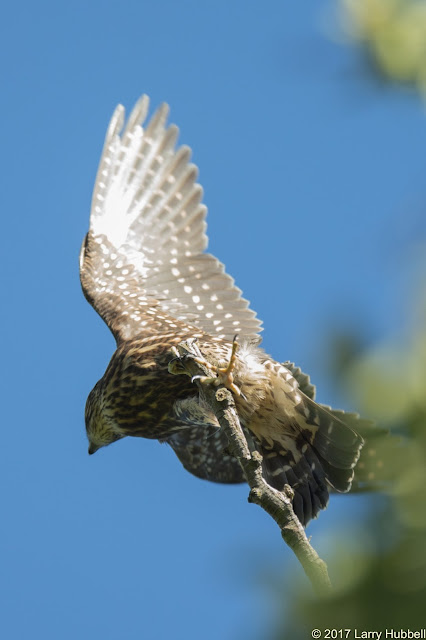 Soon it was gone, looking for pint-sized food. Merlins are less than a foot long and only weigh about six ounces. Young ducklings seem like perfectly sized prey but they are getting to be few and far between this time of year. 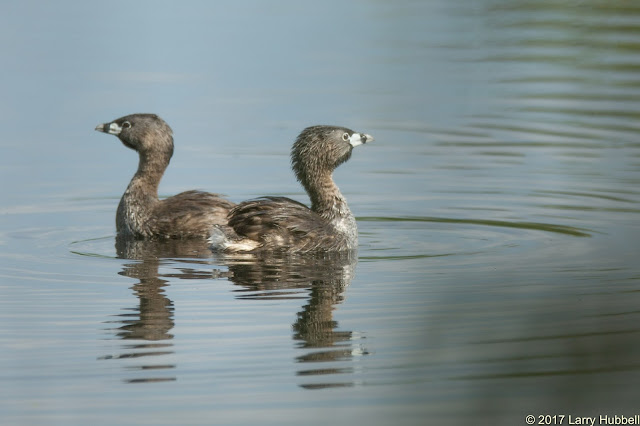 These two adult male pied-billed grebes were defending their common territorial border. The mate and the young of the bird on the left were looking for food nearby. I was happy that the merlin apparently overlooked their young grebes. 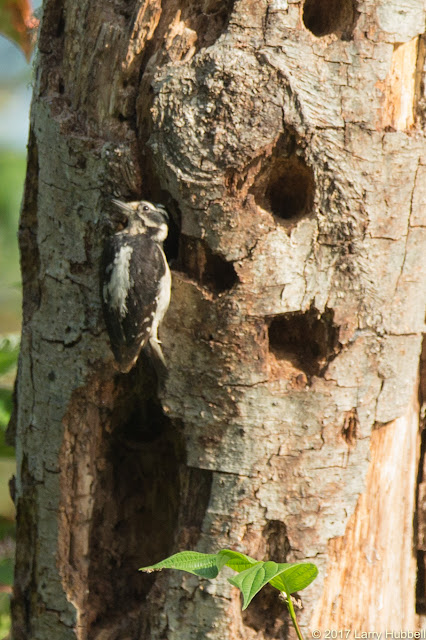 Later, I found this female downy woodpecker near Foster Island. I was surprised to watch it dig into the large snag for fifteen minutes - apparently looking for food. I normally see downy woodpeckers working on smaller trees and shrubs. Usually, they move a lot and make small quick holes. I don't ever remember seeing a female work the same hole for more than a minute. This downy's behavior reminded me of a pileated woodpecker. I have never seen a downy behave this way.

I have watched male downy woodpeckers work for long periods of time on nest sites. However the nests I have been watching this year have long since been completed, their eggs have hatched and the young have grown up and left. I doubt this female's excavating had anything to do with nesting. 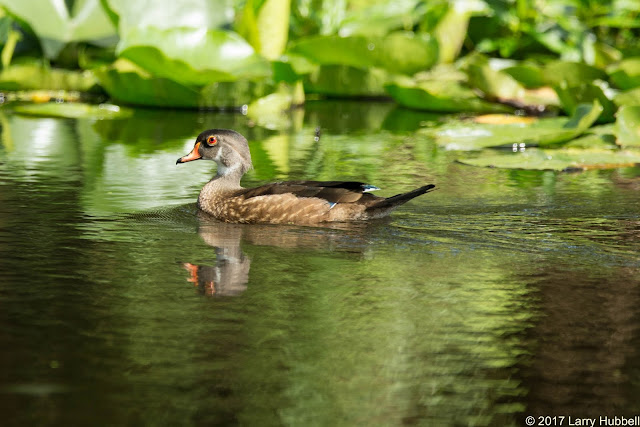 Earlier in the week, Louis and Whitney had been wondering whether wood ducks go through an eclipse plumage like mallards. We concluded that they must. Certainly the dull coloring of this male is a lot less flashy than its breeding plumage.

In this week's post I had a hard time focusing on a single species. So we ended up with a dozen different species all of which exist in our local Puget Sound watershed. I hope you have enjoyed this avian potpourri.

Which of the following is not a native tree? 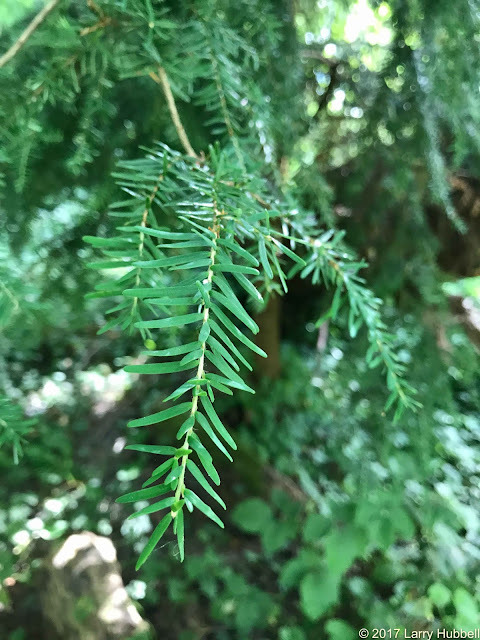 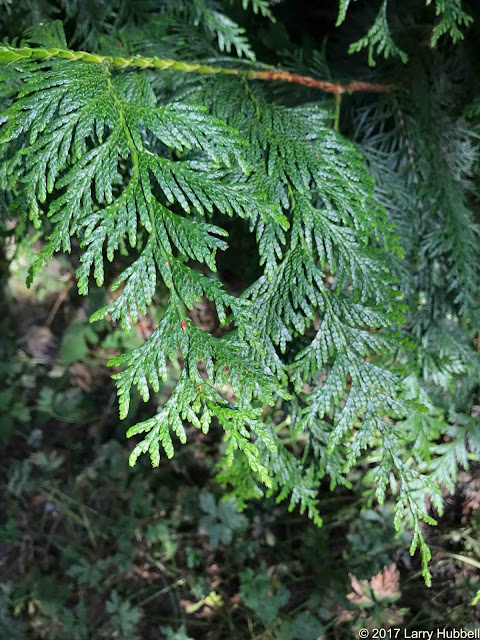 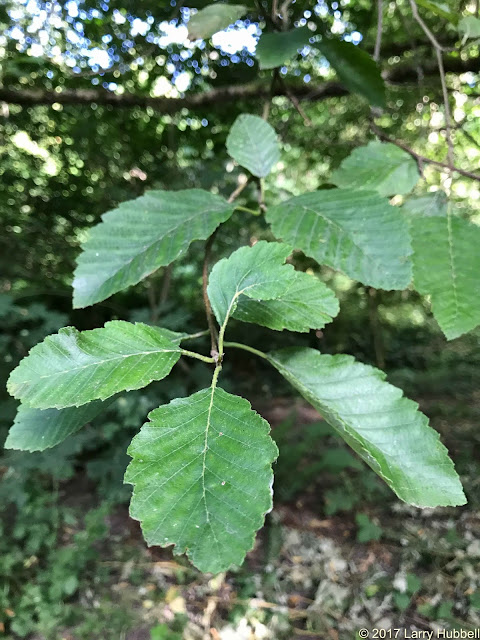 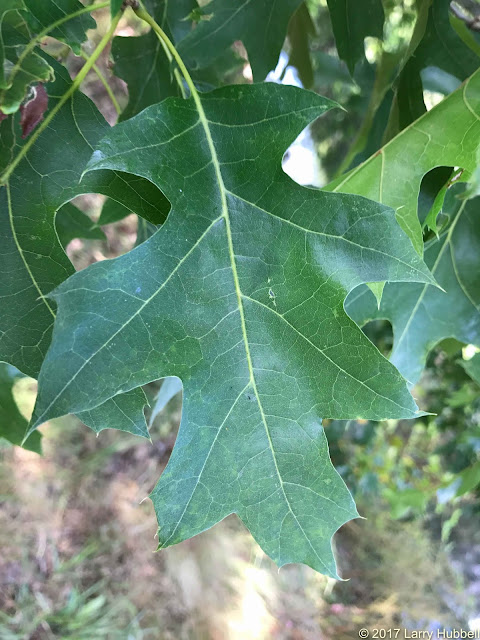 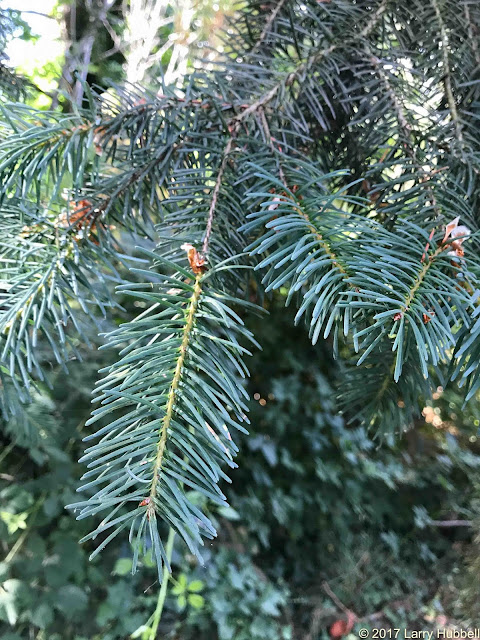 The non-native is the oak tree. I cannot conclusively identify which oak it is, however it is not  the native Oregon White Oak because the lobes on the leaf shown are pointed instead of rounded.

Posted by Larry Hubbell at 3:00 PM