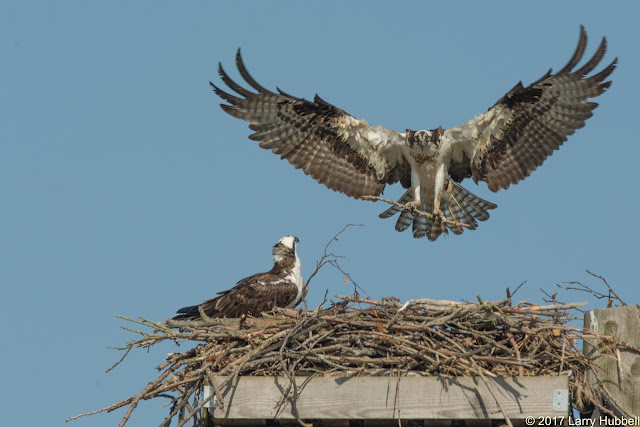 A lot can happen in a year. Chester and Lacey are now experienced Union Bay breeders. You can read about their unique, potentially first in a hundred years, experience in the post 'Something to Celebrate'. Since then they have separately completed their fall and spring migrations, covering thousands of miles. According to All About Birds osprey may fly as much as ten thousand miles per year. Chester and Lacey have returned to their Union Bay nest site and each other. Plus, Lacey started sitting on eggs around May 15th - just like last year.

Currently, Lacey spends most of her time in the nest. Occasionally, she takes brief breaks. Sometimes, she flies figure eights around the nest to temporarily escape her maternal confinement. Last week, while Chester guarded the nest, Lacey flew over and snagged another dead branch to continue elevating the exterior of their avian nursery (see the photo above). 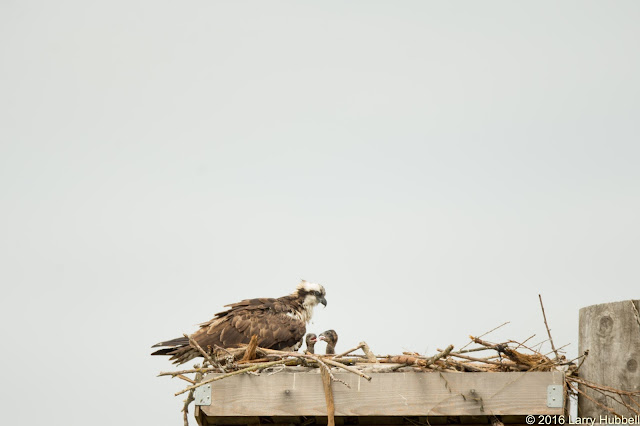 This photo was taken last year on July 10th. Given that Lacey began sitting at about the same time this year, we may be able to see the young in the nest sometime in the next week. According to All About Birds their incubation period is between 36 to 42 days. They are almost certainly beyond that time frame.

Most likely the young have already hatched and are simply not yet strong enough to hold their heads above the edge of the ever-rising nest. Clearly, the visibility bar is being raised this year. Notice the growth of the nest between this photo from last year and the current photos. 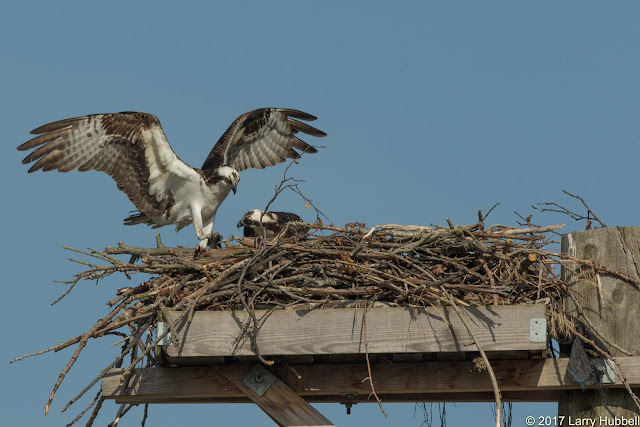 This year, Chester is once again consistently bringing food to the nest. This photo from last week, is an example of his hard work and willingness to put the family's well-being ahead of his own. He will often deliver food to the nest, then go back out and catch his own food before finally returning to sit nearby and eat. 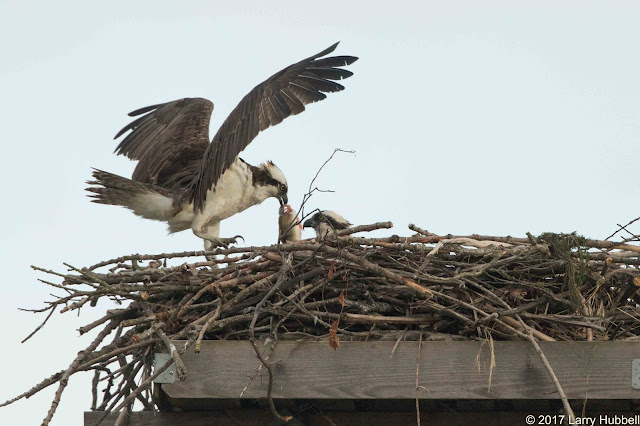 This morning, Chester delivered a fish as usual. Lacey ate and possiby fed the young. The process was hidden to me. Finally, it appeared that Lacey covered the young to protect them from the early morning chill and seemed to settle in for some quiet time.

During this time Chester had been watching from a nearby cottonwood tree. He often guards the nest from that elevated position. If Lacey sees a potential threat she will call out sharply and Chester will be the first to take to the air to defend the nest.

While Lacey was resting quietly, Chester came to life and flew over to the nest. He landed, looked Lacey in the eye, and then picked up the remains of the fish and flew away to feed himself. In someways it was a rather brave maneuver because the female osprey can be as much twice as large as a male. They can also be rather possessive, especially of food intended for their young. Maybe it it is a sign that Lacey trusts Chester and his ability to deliver food. In any case, it is an osprey behavior I have never seen before. 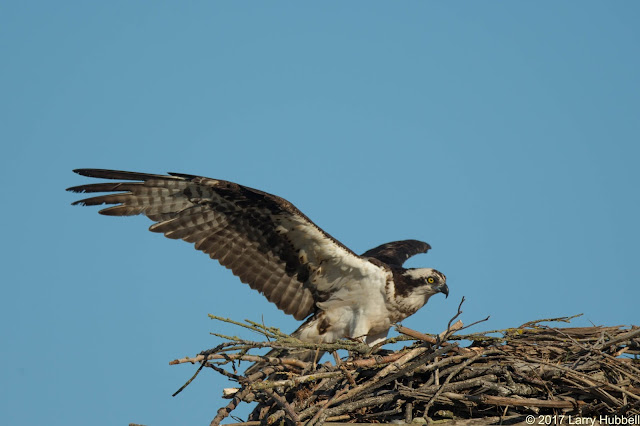 An easy way to tell Lacey and Chester apart is by looking at their chests. Lacey has a dark 'necklace' which is scattered across her upper chest. Chester, in keeping with his name, has a chest of pure white.

Chester and Lacey are particularly sensitive to any potential harassment from other predatory birds. Bald eagles, red-tailed hawks and even other osprey are consistently consider a threat.

This week, I watched Chester and Lacey escort a wandering and confused young eagle out of their airspace. I am sure the first-year eagle was much happier when it escaped their frantic attention and finally reached the Laurelhurst neighborhood.

Last October, I watched their daughter Kate chase off a red-tailed hawk, all by herself. Last summer I watched the parents drive off every eagle within eyesight and any other osprey which attempted to fly near the nest. 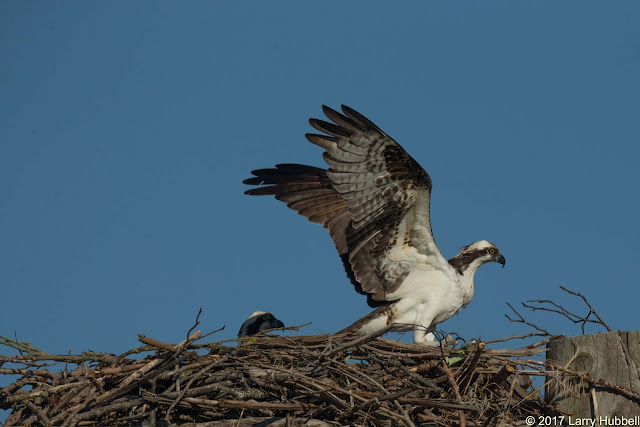 You can imagine my surprise when last week a third osprey came and landed in the nest. Even more astonishing was the lack of reaction from Chester and Lacey. They did not appear to be at all concerned. The only other osprey I have ever seen in their nest were their own young.

Can you see any differences between the bird above and Chester and Lacey? Personally, I think the neck on this third bird seems a bit more slender. Also, the thin delicate necklace is clearly different. It is much lighter than Lacey's necklace, while also unlike Chester's unmarked chest. 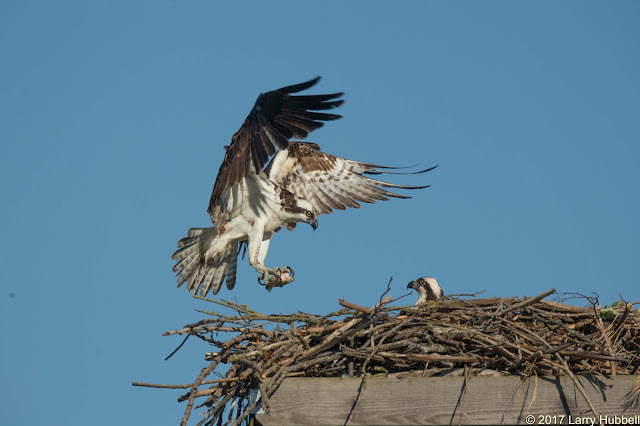 Here is a good view of Chester's chest, just prior to dropping off a delivery of sushi for Lacey's lunch. 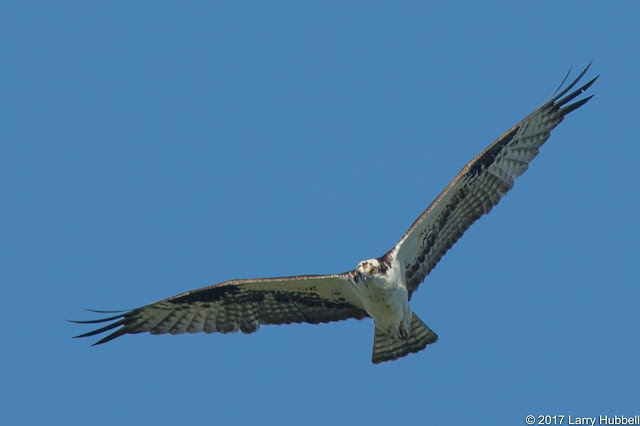 The top of the third bird's head is also patterned differently than Chester or Lacey. Last year, Jim Kaiser, the osprey biologist who designed, built, and installed this nesting platform, told me about a study in Europe which demonstrated that osprey can be uniquely identified by the patterns on top of their heads.

Chester and Lacey's mild-mannered acceptance of this third bird makes me think that it must be one of their offspring. The necklace implies the bird is most likely female. Last year, Chester and Lacey successfully raised three young. They had two males, which we called Wilbur and Orville, and a third sibling, their sister who we call Kate. In the prior year (2015), Chester and Lacey did not complete a nest and did not have any young.

All things considered, my best guess is that the third bird must be Kate. I can think of no other rational explanation for their combined behavior. 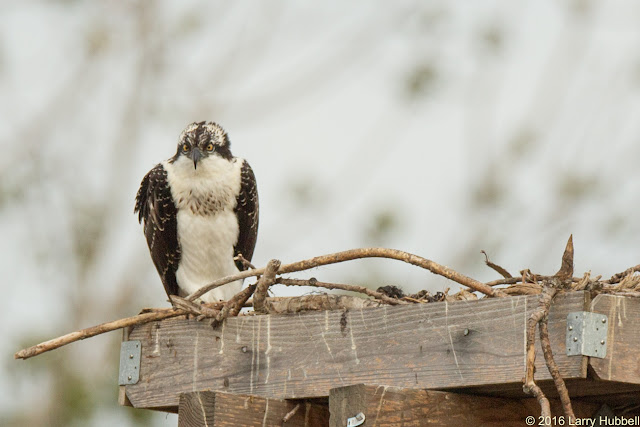 This photo was taken on October the 3rd, 2016 it shows a lonely Kate, all by herself. This photo was taken just prior to her migration south. She was the last of the five osprey to leave Union Bay. Possibly her hesitance to leave implies that she has a strong attachment to Union Bay. Maybe a special bond with her birthplace has brought her back.

Some could argue that the pattern of Kate's coloring looks a bit different this year. I agree. My supposition is that she has completely replaced her juvenile plumage with slightly different patterns and colors. Frankly, I have no way to be positive whether the observed differences between the 2016 version of Kate and this year's third bird are consistent with normal osprey development.

There is however one thing of which I am fairly certain, whether our third bird is Kate or Not-Kate it seems only logical to conclude it is a member of Chester and Lacey's family. Most likely it has returned, in its first year, to the place of its birth (or hatching). If so, then it is, by the BNA definition, a rare bird behavior.

Have a great day on Union Bay...where with luck you may see Kate in the sky - diamonds are optional!

I was at the Fill this am (Sunday) and there are as least two chicks in the Osprey nest. Their timing is just about right on from last year. By the way another great post. Attached photo from today. 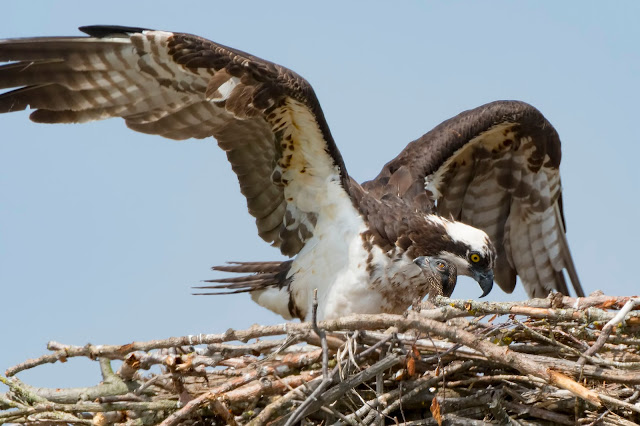 Have a great day on Union Bay! 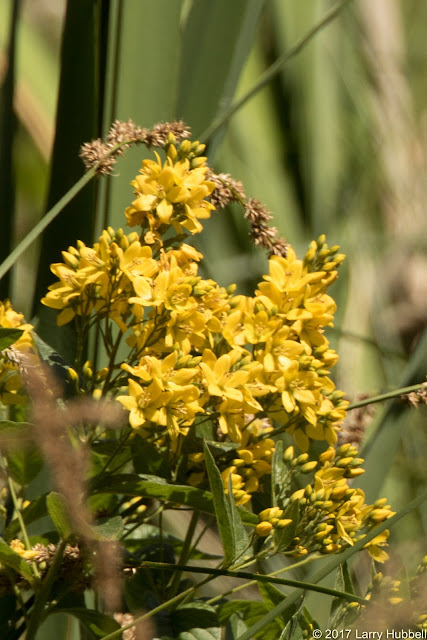 
This yellow invader is currently blooming in the Union Bay Natural Area. It spreads not just via the flowers but more importantly and invasively via the root system. The folks at the UW Botanical Gardens are stuck between a rock and a hard place. They do not have enough resources to eradicate the weed manually and the only cost effective means of controlling the weed is therefore an herbicide.