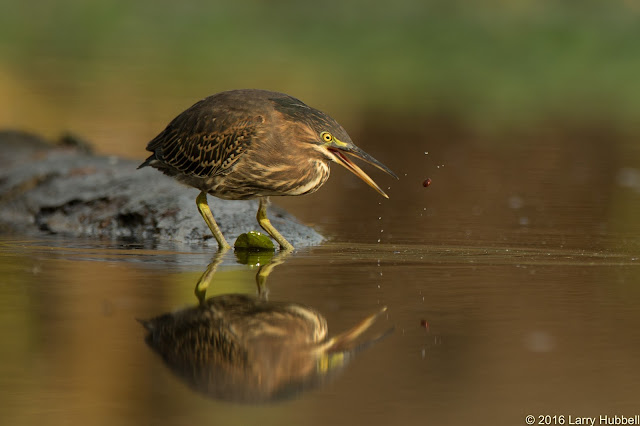 Green herons are fairly unique. As far as I know they are the only local bird which uses lures. I am not sure what this young bird was tossing out on the water but I do believe it was attempting to attract fish. 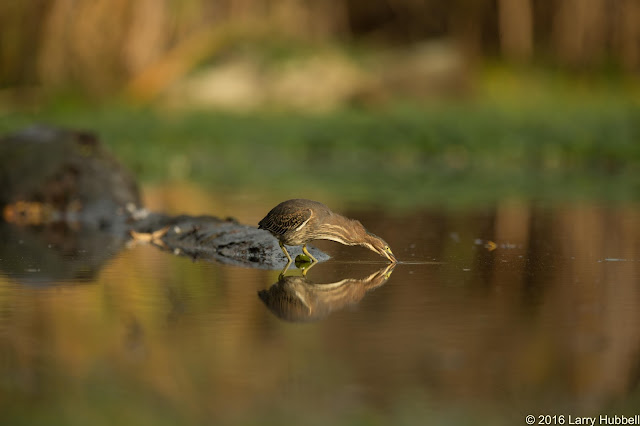 Up until yesterday I had only read about this behavior. 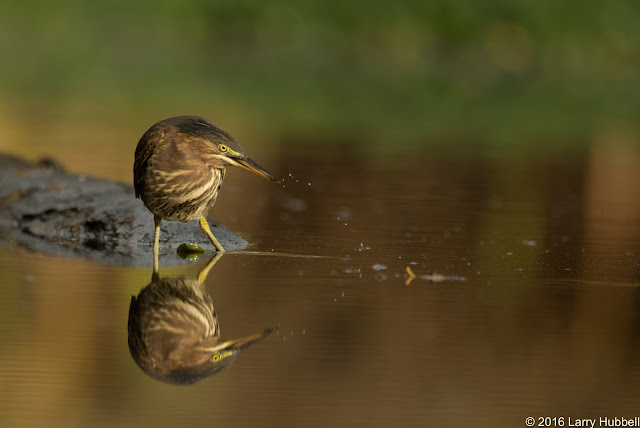 At first I was uncertain what the bird was doing, but the constant retrieval and re-casting made it obvious. 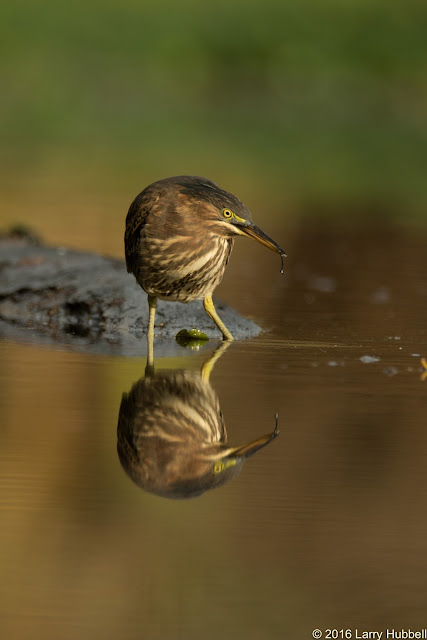 When the original lure proved unsuccessful the young bird switched to a small stick. 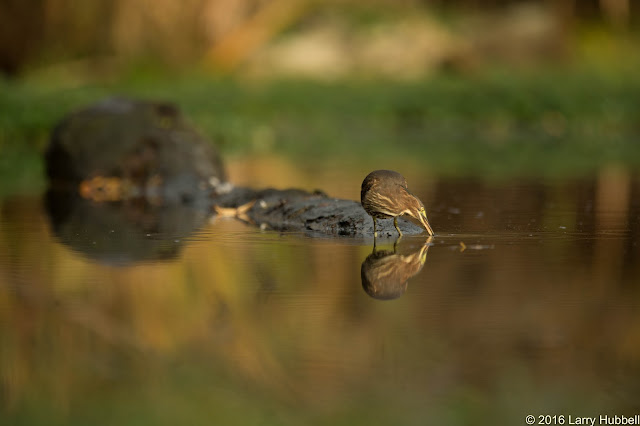 I had paddled out onto Union Bay before dawn. I was hoping to be ready and waiting for horizontal sunshine to illuminate my photos. Sadly, the sun spent a couple of hours burning through the early morning mist. I had already turned toward home when I happened to notice the small heron standing behind me.

It would take ten green herons to weigh as much as a great blue heron - our Seattle city bird. Their camouflage colors as well as their size explains why green herons can be hard to spot. 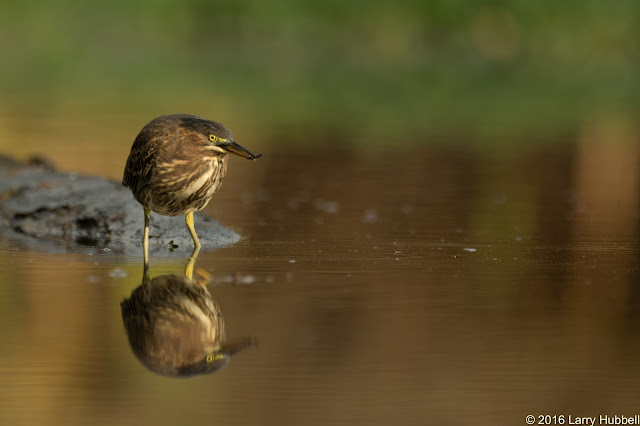 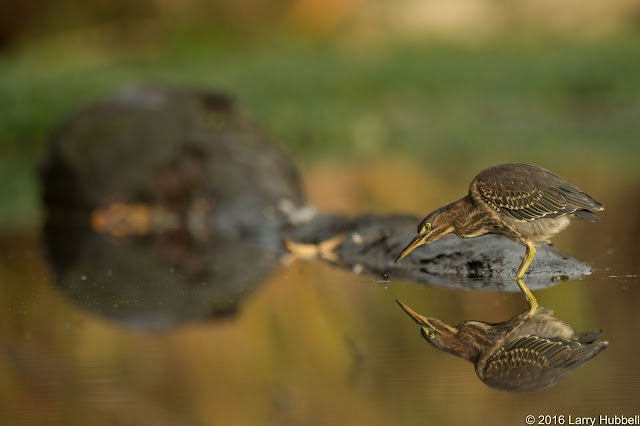 I suspect that young birds may wander a bit more than the older birds and Birds of North America says that all green herons may disperse, e.g. wander about a bit, prior to their fall migration. We can tell this is a young bird from the stripes on its chest and the small whitish triangles on the terminal ends of its wing feathers. 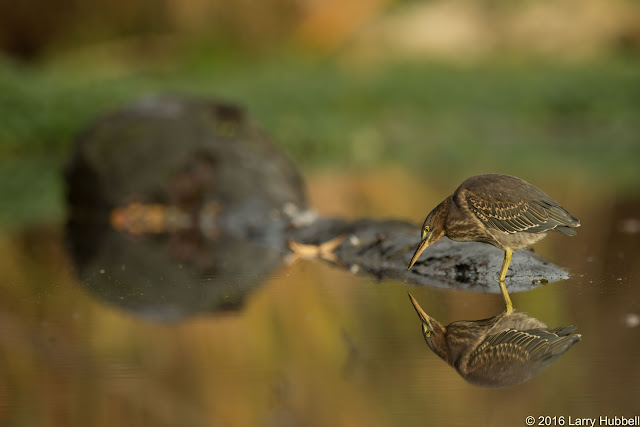 Its fishing 'skill' may be another clue to its age. Youthful inexperience may well explain its exuberance and lack of patience. I did see it eat an insect or two so I do not think it is presently in danger of starving. 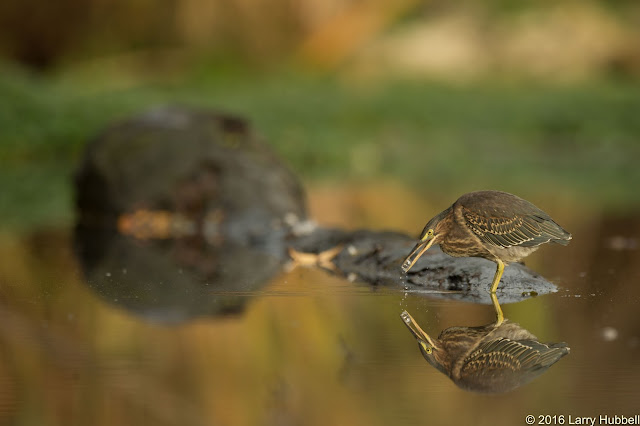 I was especially appreciative of the unique circumstances. Getting to photograph a green heron in November, when the reflection of the fall foliage turns the water yellow is a first for me. Plus, I happened to be in the right place when the sun finally burned through the fog and for the first time I got to watch a green heron using bait. I felt like I won the lottery. 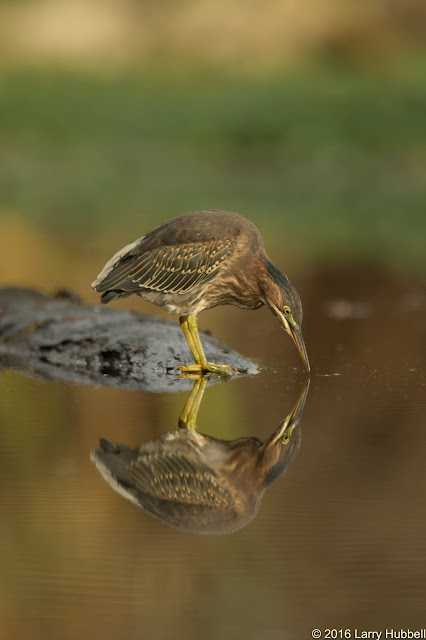 As a boy, my uncle taught me how to fly fish. It takes skill and finesse to gently lay a fly onto the water. It must settle on the water in a way which appears normal to a fish. In addition, you must learn to approach the water quietly and to patiently wait for the fish to take the bait. 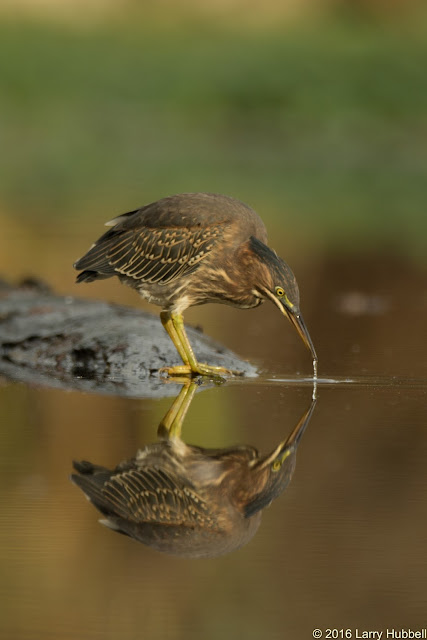 This young heron reminded me of myself, when I was young. I did not whip the water to a milky froth, but my uncle did have to teach me that after about three casts the fish know you are there. You may as well try your luck elsewhere. 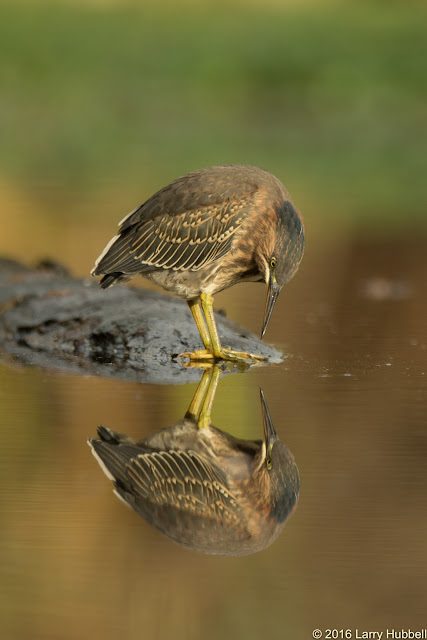 Sadly, the young heron did not have a kind uncle... 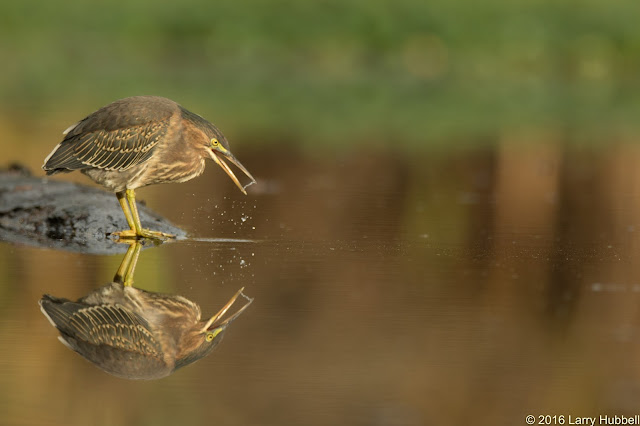 ...to teach it the balance between patience, casting and hunger. The heron may have an instinct to fish but it was learning through trial and error. 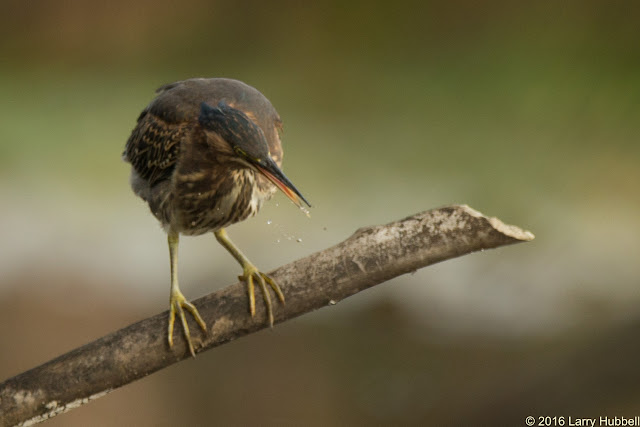 Eventually, the heron did relocate to a new, elevated position. 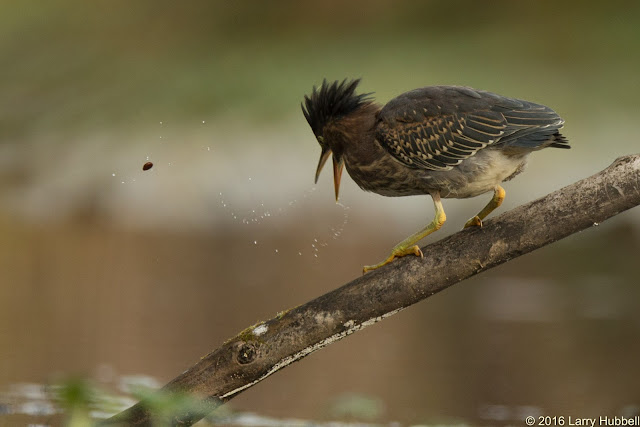 This made it more difficult for the fish to discern his (or her) presence and it gave his casts a bit more range. 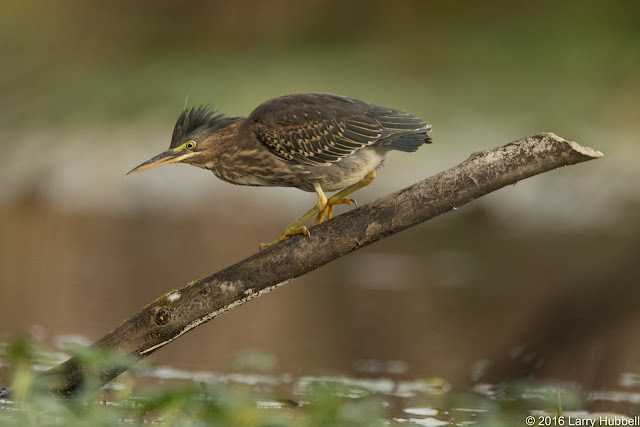 The downside is it could not 'reel in' its bait. 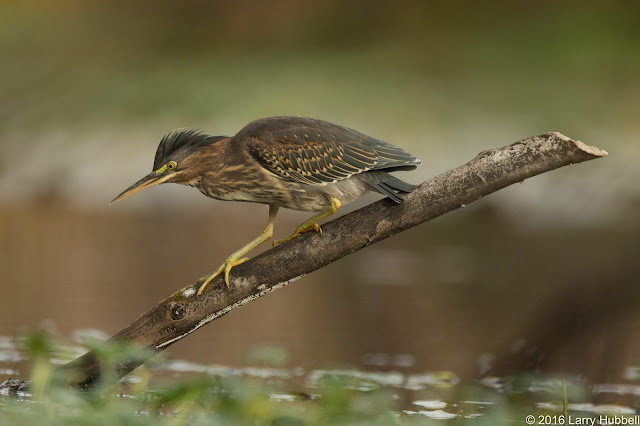 Instead, the heron had to climb all the way down and... 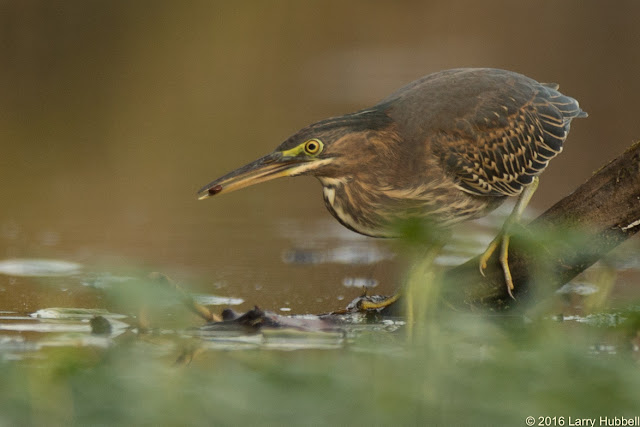 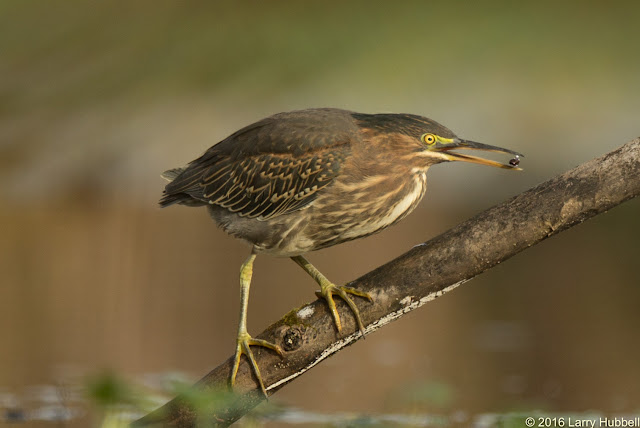 ...and then silently inch its way back up... 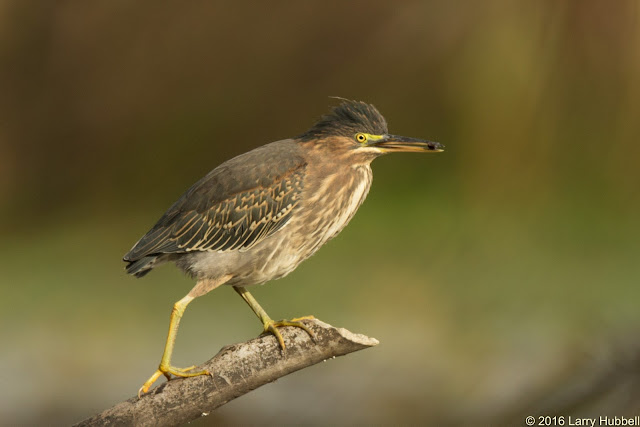 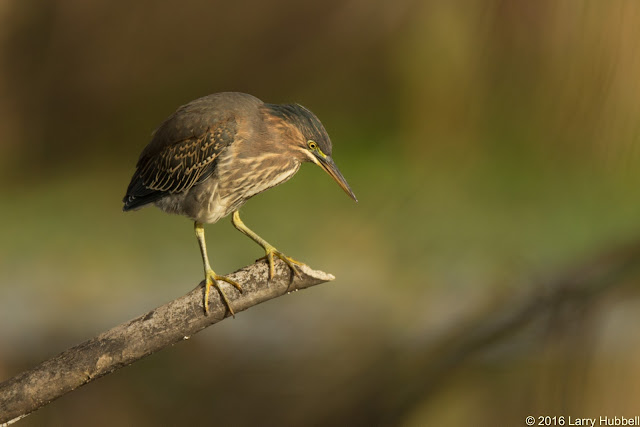 All the effort involved may explain why I have never seen a green heron using lures in the past. Still the process is subtle and it is possible I overlooked the behavior. 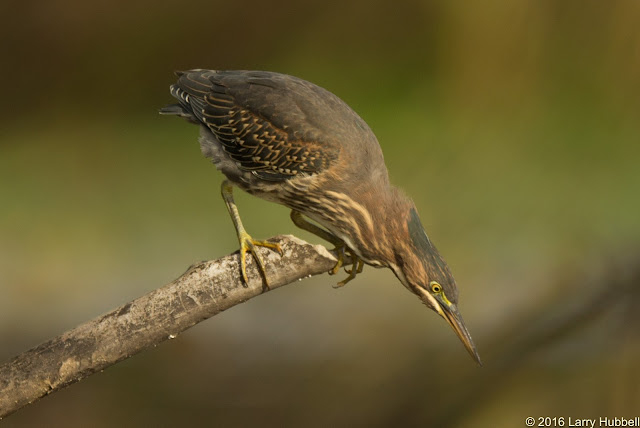 The young heron appeared to be learning, when it changed its approach. 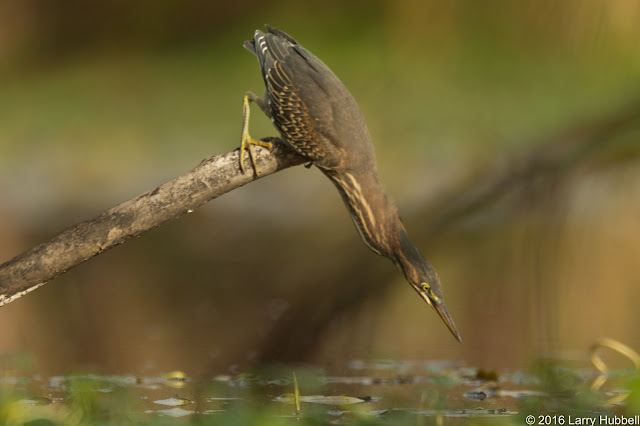 Instead of using his legs and feet he simply extended his neck... 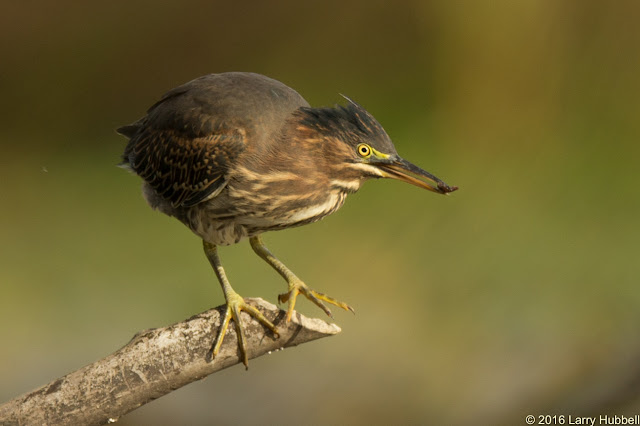 ...to retrieve his lure. 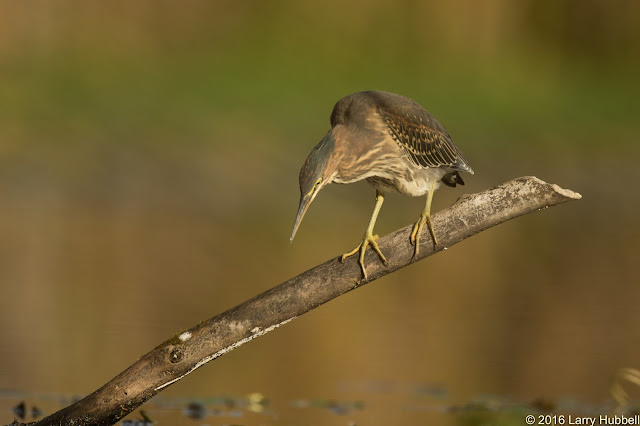 The young heron kept trying, but did not succeed while I was watching.

The young heron learning to fish reminds me of our society. We are learning to live in harmony with nature, but we continue to pave more of the soil around us, we are still polluting Puget Sound and we are still burning fossil fuels. The question for us is somewhat similar to the issue facing the young heron, Will he learn to be self-sustaining before the cold of winter eliminates the easy prey.

Have a great day on Union Bay...where green heron's fish in the city!

PS: By the way, a kind reader added a link in the comments on the Looking For Lefty post. The link shows a photo of a deer in West Seattle that most certainly looks like Lefty. You can check him out on the West Seattle Blog.