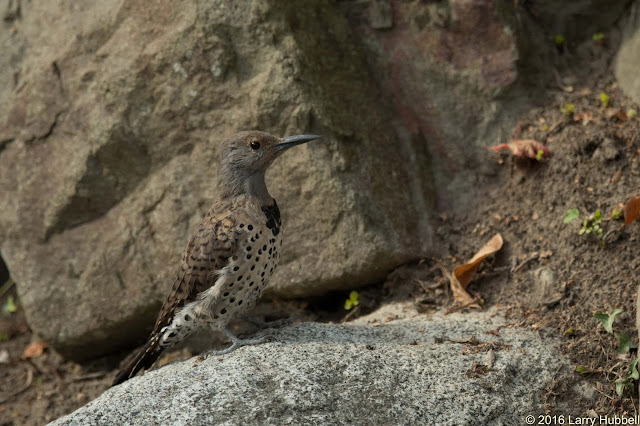 Northern Flickers are beautiful, industrious birds with many interesting and curious behaviors. In their everyday clothing flickers blend in with their habitat. The spots and dull colors help to hide them from predators. Just try looking at the back of the flicker's head.

Whenever I try, my eyes seem to have a will of their own. They wander away. It is almost as if my subconscious is saying, 'Focus on things you can see - like the eyes or the beak. Don't befuddle your mind with their camouflage.' 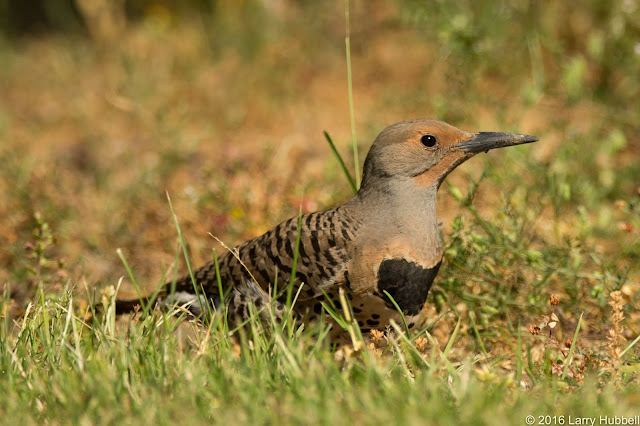 Flickers are much easier to observe with a little complimentary green in the photo. 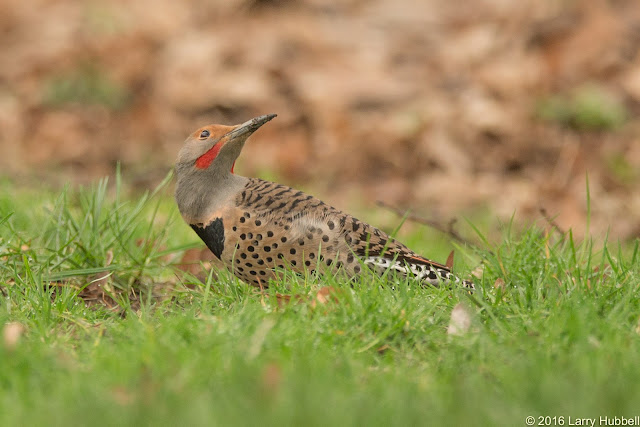 Do you remember how to tell males and the females apart? The first two photos showed females, while this one displays a male. I suspect the mud on the bird's beak indicates that it has been probing the earth for ants - its favorite food. 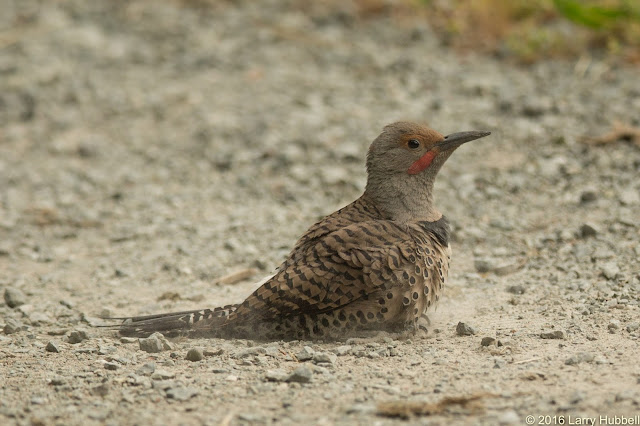 Just like humans, flickers are concerned about their cleanliness and appearance. I have never seen flickers use a birdbath, but more than once I have watched them bathing in the dust. This male flicked the pebbles and dust with its beak and even flipped over on its back. It seemed to stop at every awkward position in between to shake its feathers. You can even see the dust rising around it. Maybe this is the true meaning for the term, 'feather dusting.' I suspect the dust helps to suffocate or at least discourage small irritating creatures - like mites. 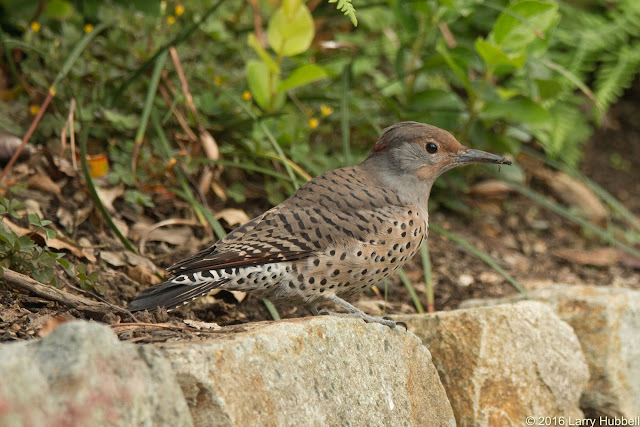 This bird's apparel displays its gender and even provides a hint about its genetic background. We know it is a female because it does not have a red stripe on its cheek. It is also curious that the feathers on the back of its head seem longer and less smooth than usual. 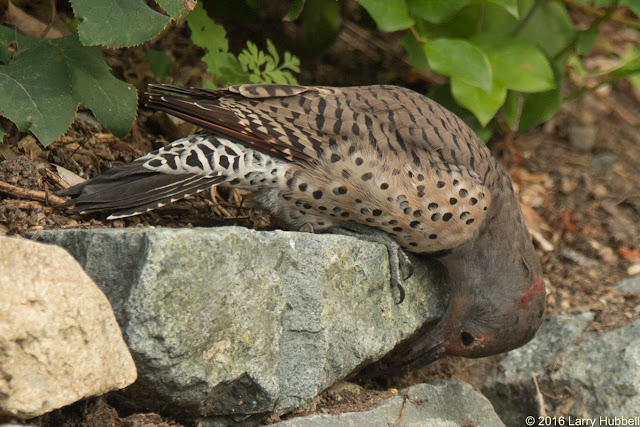 When the bird began to search under a rock for ants it provided a slightly better view of the back of its head. The faint red 'chevron' on the nape of its neck is a marker that indicates yellow-shafted genetics. In every other way this bird appears to be one of the local, red-shafted flickers. 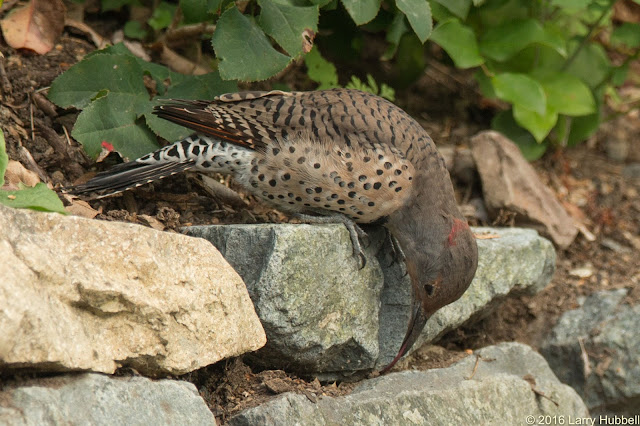 In this photo you can see the tongue as it reaches between the rocks to extract its prey.

If you look closely at the primaries you can see the hint of an orange feather shaft. When sitting the primary wing feathers are folded into the dark horizontal 'V' which is above and in front of the bird's tail. This orange shaft is apparently where the term 'red-shafted' comes from. It would certainly seem more fitting to call them orange or salmon-shafted.

The bird's tail feathers are also orange-shafted. The brilliant color on these feathers is most often hidden - especially when the wings and tail are folded and not in use. 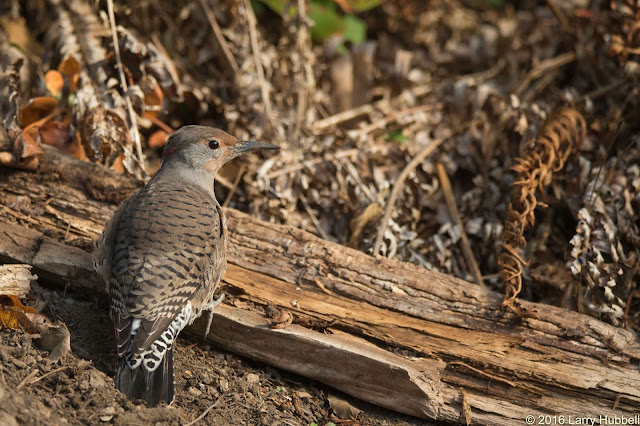 This view does not show much of the chevron or the shafts, but I do love the way the bird's 'working clothes' blend with the dead wood and the dried leaves. 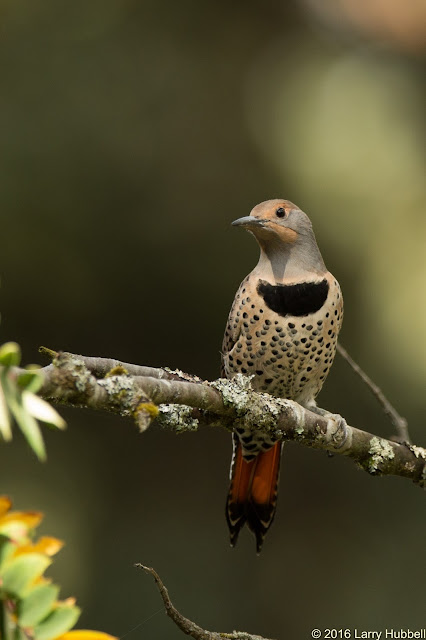 Occasionally, a flicker inadvertantly reveals a bit of its hidden beauty. As you can see here the underside of the tail feathers are more extensively colored. You can see examples of both the red-shafted and the eastern, yellow-shafted flickers by visiting All About Birds. Just click on the orange link and then scroll down to see the photos. 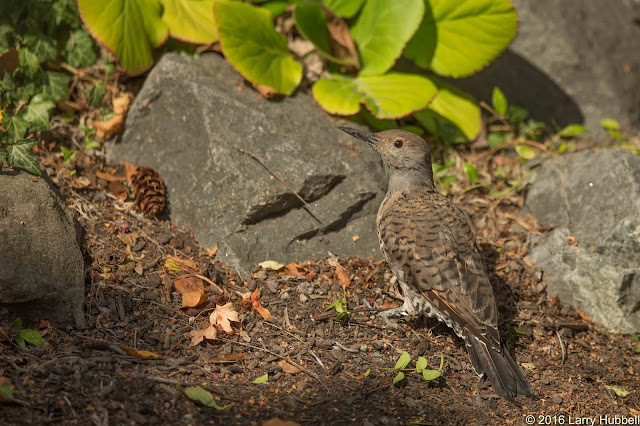 On my way home, I happened to see another female searching for ants. She only had a few moments to feed before... 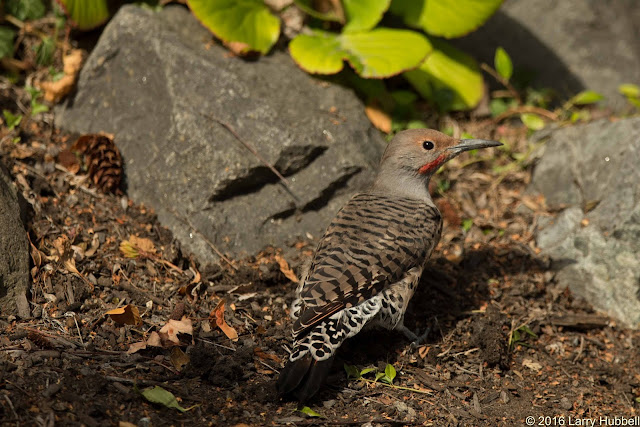 ...a larger, male flew in and chased her away from the food. 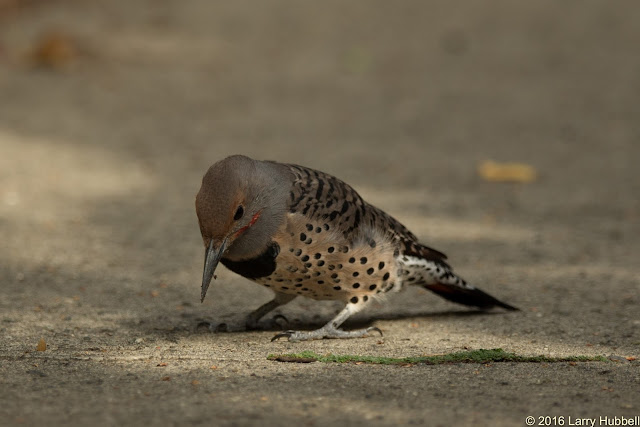 He soon moved out onto the sidewalk and appeared to listen intently at a crack. 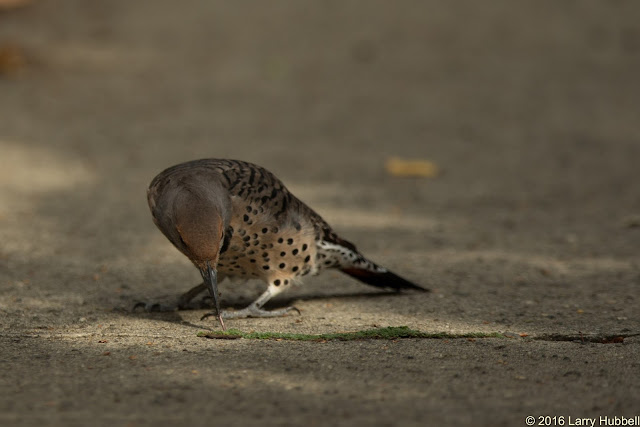 Ants in sidewalks are like a fast food restaurant for flickers. 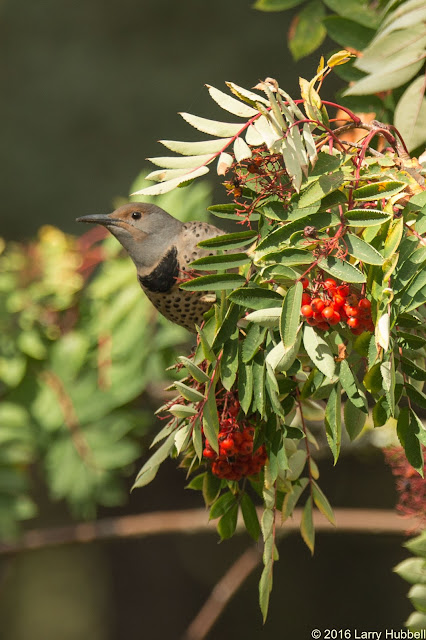 In the fall, when the ash berries are ripe flickers are willing to... 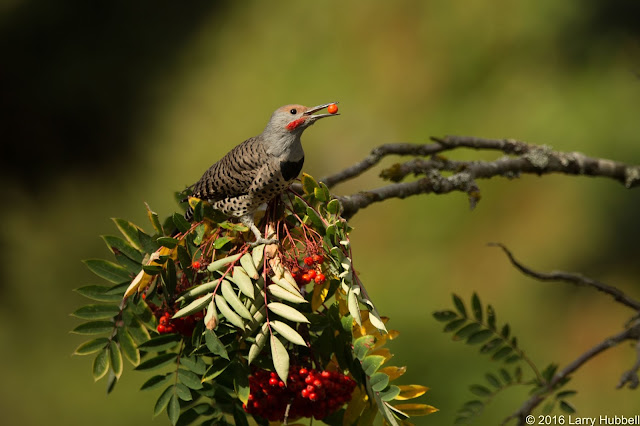 ...vary their diet and spice up their life a little. 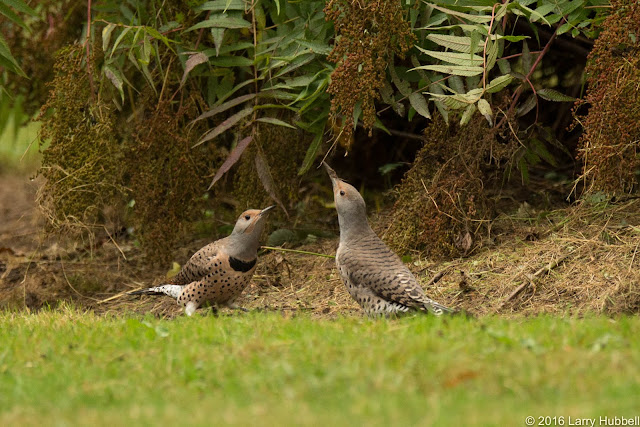 Also in the fall, the flicker's hormones start up again. Possibly this is related to growing new feathers. In any case these two females appear to be feeling a bit competitive. If you follow This Link and then scroll down you can read the poem, by Susan Stiles, which offers a more poetic explanation. 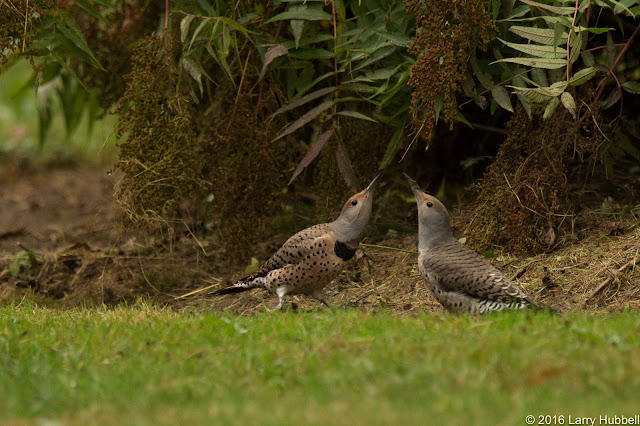 Whatever the reason these two females seemed intent on showing each other up. 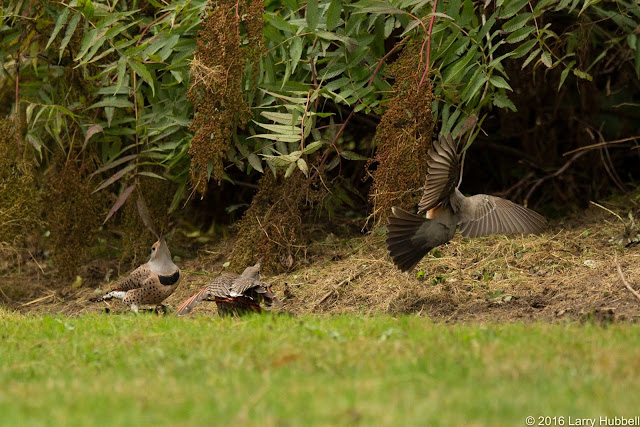 They were so focused on the competition that they almost did not notice this robin when it inadvertantly attempted to land beside to them. 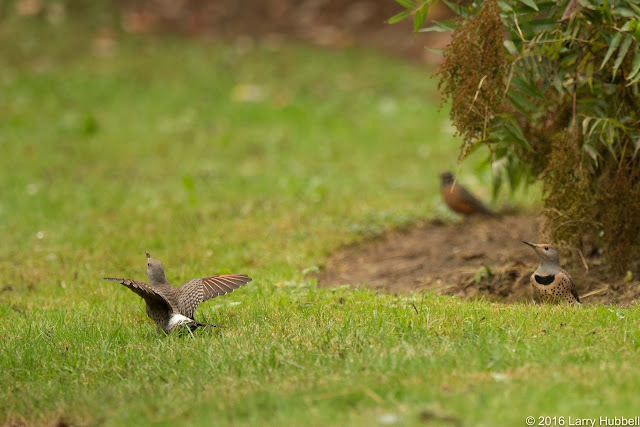 Soon the robin moved away and the flickers got back to displaying the superior fashion sense. While the bird on the left showed the camera her orange-shafted primaries, she had almost certainly been displaying her more brilliant orange undersides to her female competitor. 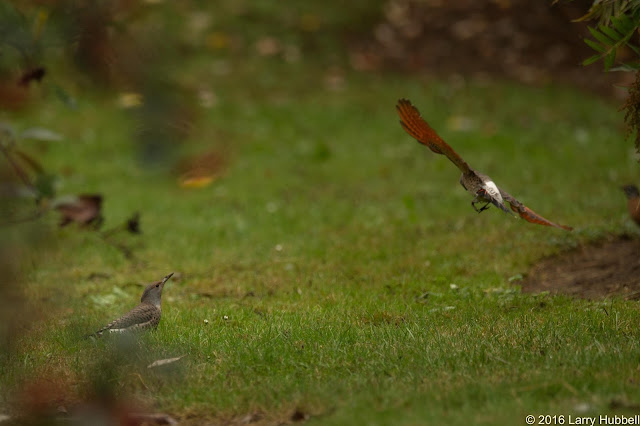 Immediately, her competition took to the air as if to say, 'Mine are even brighter!' 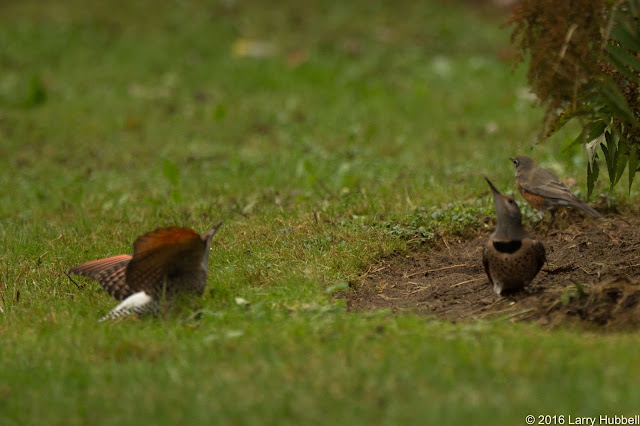 This of course elicited a corresponding response. 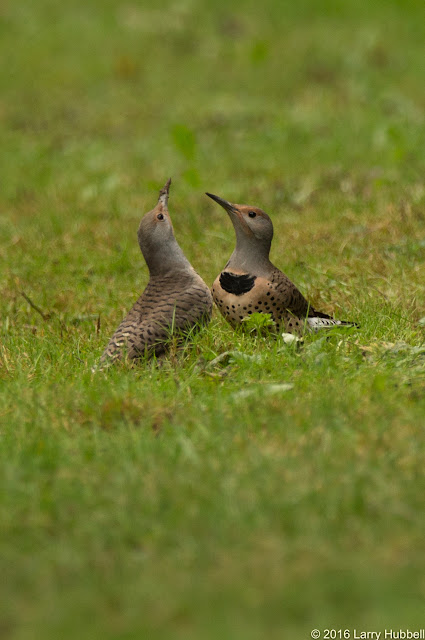 Holding their beaks in the air certainly gave them a conceited look. 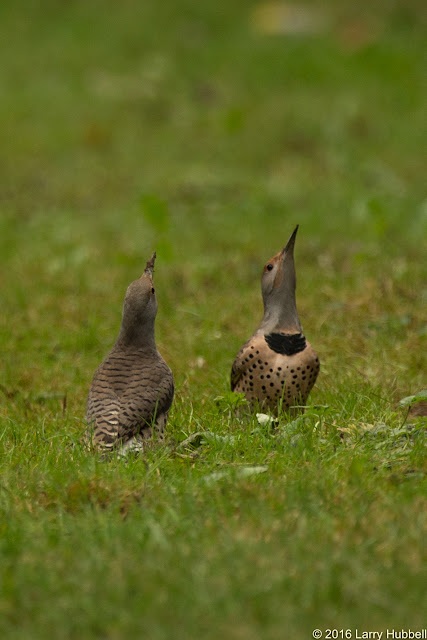 Of course the meaning behind their behavior has most likely evolved differently than with humans. Still, the resemblance does make me wonder. Three hundred million years ago might there have been a common impulse that inspires similar looking behaviors in both species. Whether it is an evolutionary legacy, a strikingly parallel evolution or even the work of a common creator any way you look at it, it provides another example of how much life on Earth has in common. 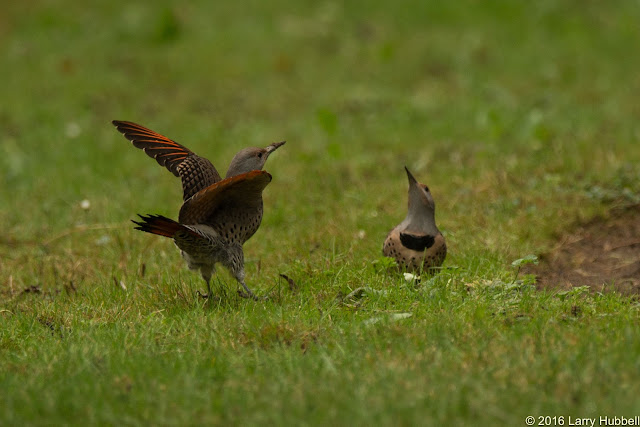 In a similar manner, this strutting behavior reminds me of human models walking confidently up and down a runway. I must admit to being totally smitten by the red-shafted flicker's fall fashion show.

Have a great day on Union Bay...where flickers show off in the city!

Posted by Larry Hubbell at 1:29 PM