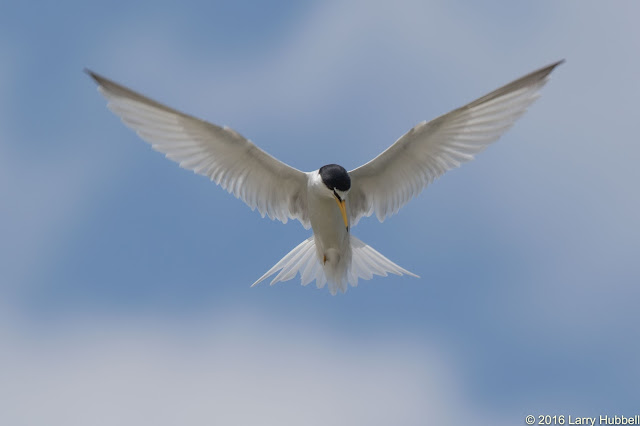 I do the majority of my birding around Union Bay. Birding locally keeps me in touch with the wildlife in my neighborhood while minimizing both my travel time and my contribution to global warming.

This week's post is an exception to the rule. Near the end of April, my wife and I went on a very special family trip. We stayed in a well known U.S. city. Your challenge is to guess the city. You can use the bird photos and my comments in this post as hints. For example, the city where we stayed has a population of less than two hundred thousand people. 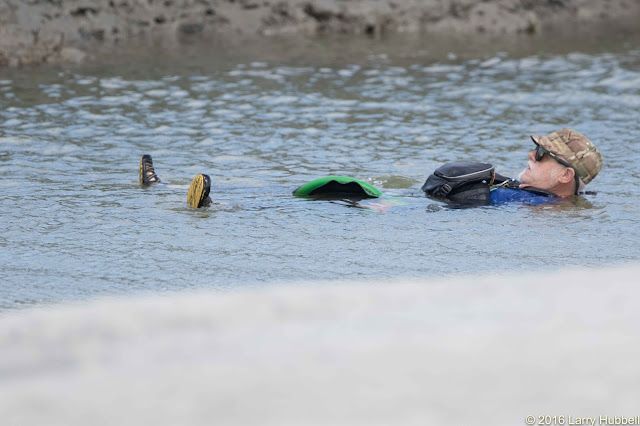 The angel-like bird in the previous photo is a Least Tern. My impression was that the tern was searching the water for food. When our guide, Preston, stopped to cool off for a moment, I thought the tern came even closer. Maybe the small bird was hoping to catch a creature startled by Preston's water adventure.

I am including links to All About Birds for each bird species. The Cornell birding guide contains range maps for the birds which may help you focus-in on the correct part of our country. Once in a while a bird may disregard its 'normal' range. I have attempted to mention this each time it has happened. 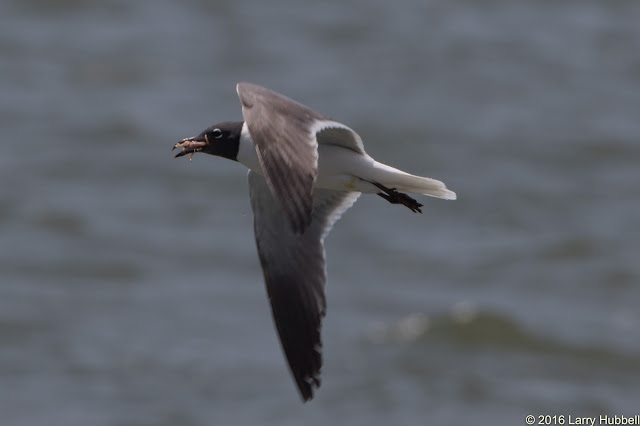 This Laughing Gull was more successful than the tern in securing food. I am surprised that everything about the gull's coloring indicates it is prepared for breeding season - except its bill which has not yet turned red. My best guess is this might be a younger bird and its bill would be the last visible portion of its body to achieve a mature breeding color. 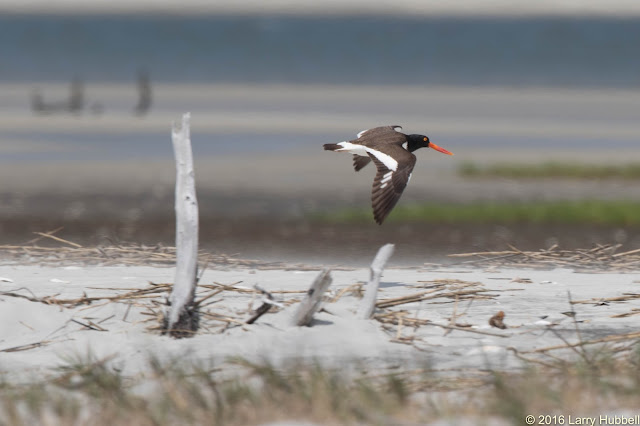 On the other hand, this American Oystercatcher certainly had a bright colorful bill. 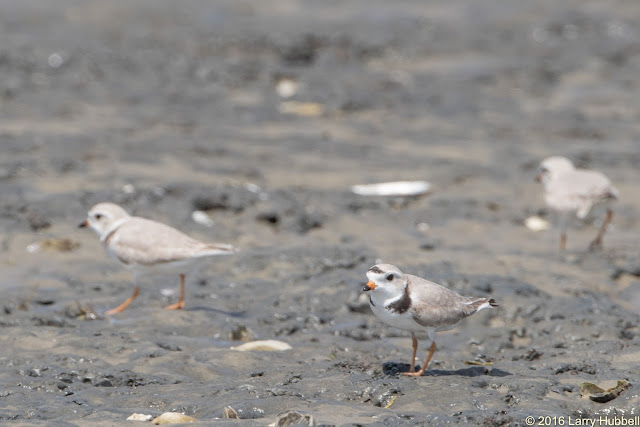 The Piping Plover had colorful bills as well, but their smaller size made their tiny little beaks a bit less obvious. Sadly, All About Birds says all populations of this bird are consider threatened or endangered. It might be wishful thinking, but hopefully since we spotted these birds outside their normal breeding range we might be observing a slight expansion in their territory and maybe a first step toward recovery. A more pessimistic possibility would be that they are wandering far and wide searching for food and a safe place to breed. 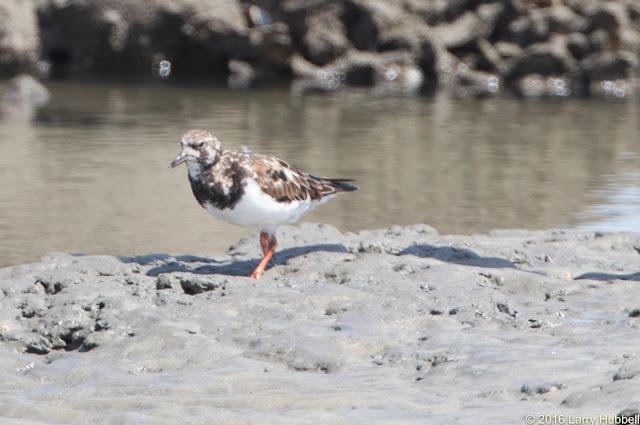 Speaking of wandering, this Ruddy Turnstone was about halfway between a possible wintering location in Brazil and its breeding site in the Arctic. No wonder it looked tired. Coastal locations (and inland waterways like Union Bay) are critical migration stops for a wide variety of birds. The 'development' of wetlands and coastal areas should always be very carefully considered. 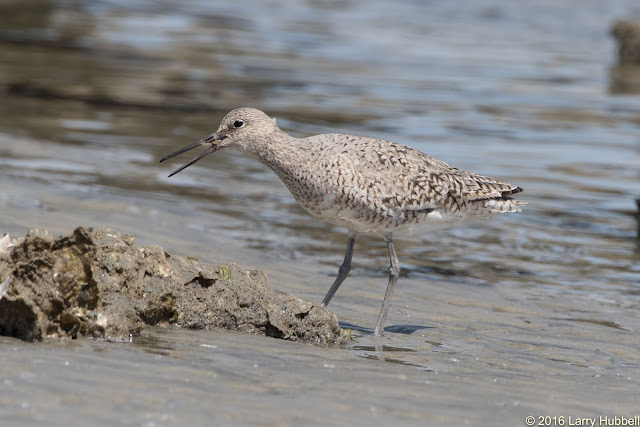 Just like the gull we saw earlier, this Willet also found a small crab. I do not know the crabs in this area but I am guessing that the light coloring of the crab may indicate a Fiddler Crab or possibly even a Blue Crab. Note: I just noticed that the Willet was still in a wintering location. 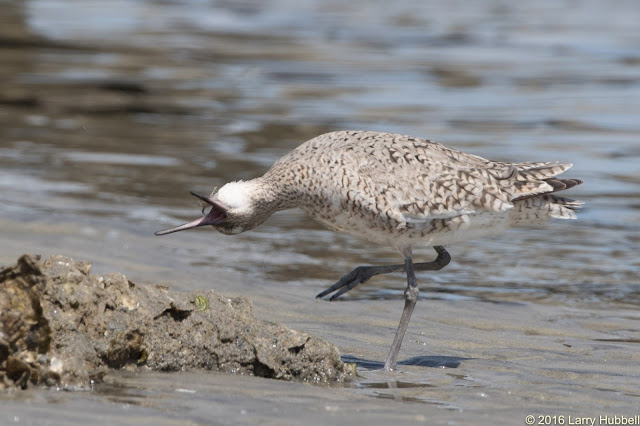 The Willet struggled to find the correct angle to consume the crab. Part of the problem might be related to Willets having sensitive tips on their bills. This helps them to feel around under the sand and find food which they cannot see. This adaptation enables them to feed in the dark of night which doubles their food finding time. Given their special feeding skills, one would expect that Willets will survive global warming, however their weakness may be that they build their nests at ground level. 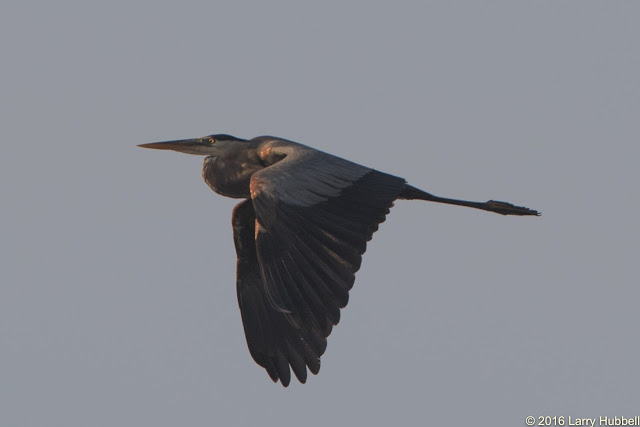 Before leaving the mystery city I also visited a nearby Wildlife Refuge a few miles to the north. One of the first birds I saw was this Great Blue Heron - our Seattle city bird. I doubt this particular bird had ever been to Seattle. 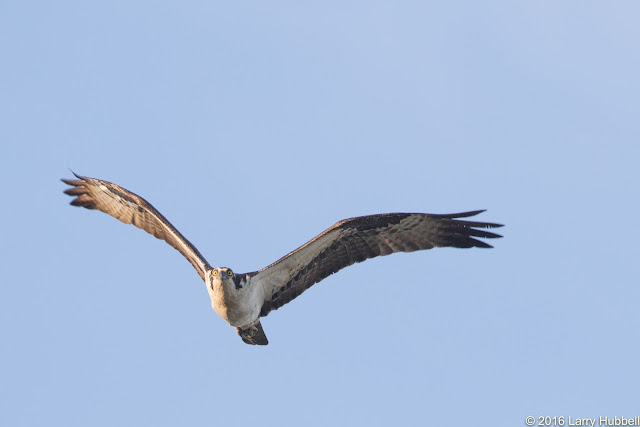 The Osprey is another familiar species for those of us who have been spending time watching Lacey and Chester around Union Bay. 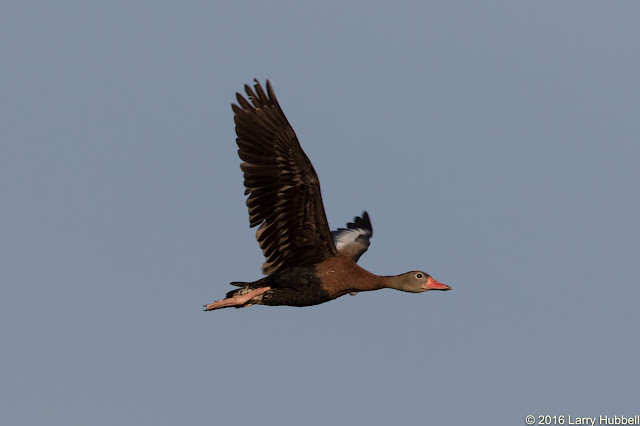 The Black-bellied Whistling Duck was a complete surprise for me. 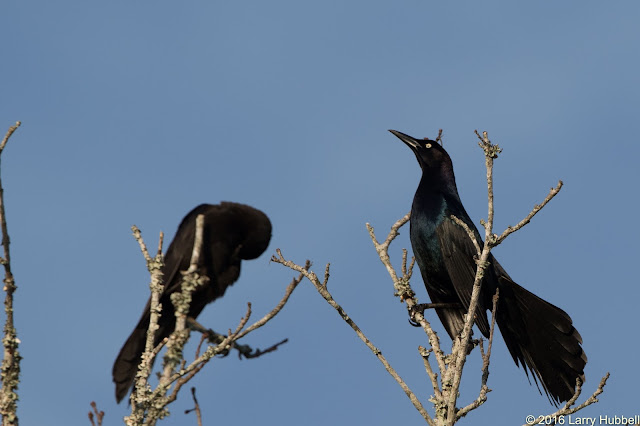 I found the posturing of the Boat-Tailed Grackle a clear indicator that spring was in the air. 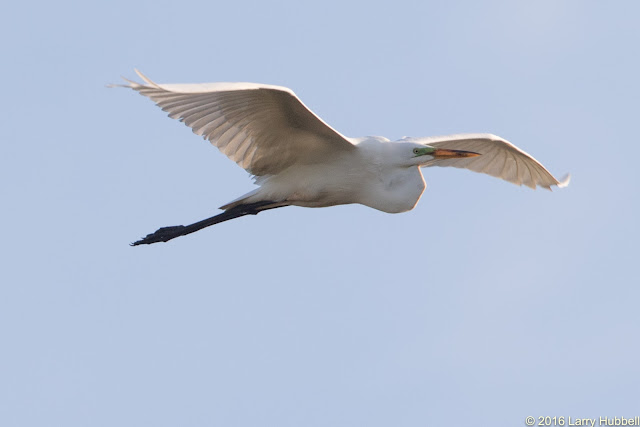 A Great Egret reminded me of The Egret which visited Portage Bay earlier in the year. If you look closely you can see a hint of the green colored lore between the eye and the beak. This coloring only develops during breeding season. 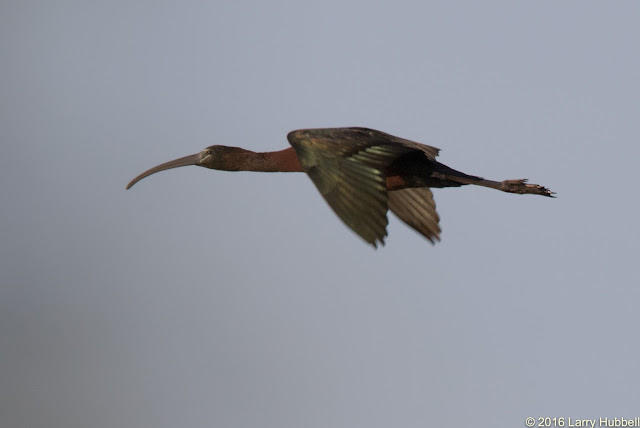 I had to spend sometime with my bird guide to identify this Glossy Ibis, especially... 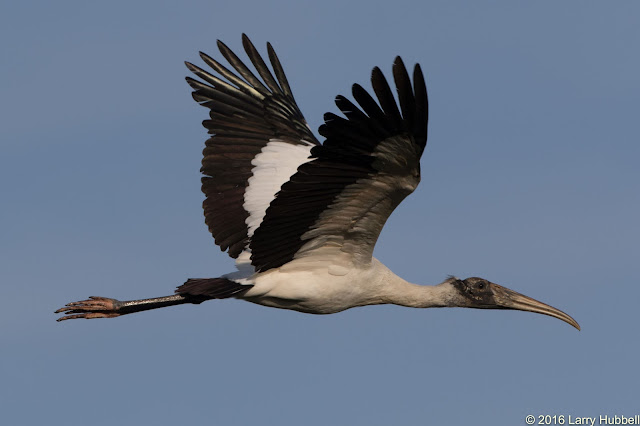 ...given the somewhat similar shape of the Wood Stork. 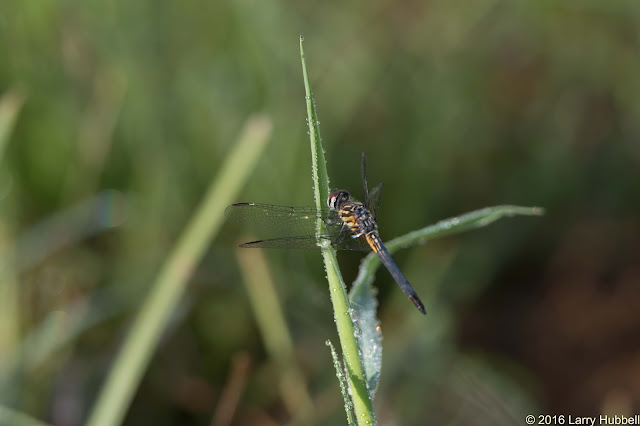 When I spotted this unknown dragonfly I immediately thought of Dennis Paulson. Given the location, I suspect Dennis' book Dragonflies and Damselflies of the West would be unlikely to contain this species. 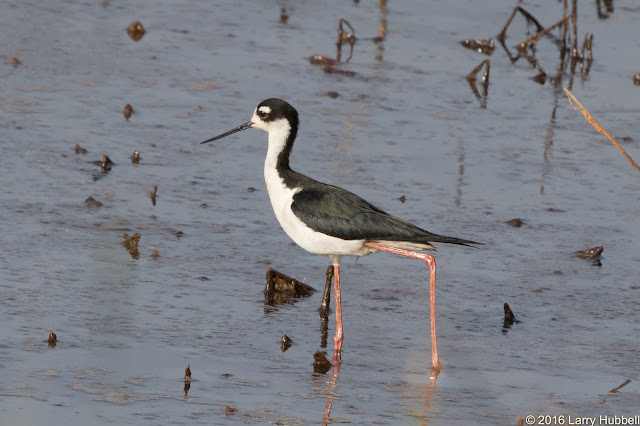 The Black-necked Stilt did not seem to mind the freshwater at the Wildlife Refuge. 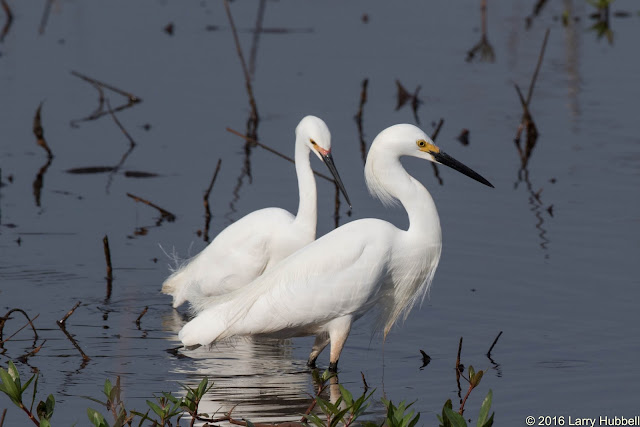 Can you see any obvious differences between these Snowy Egrets and the Great Egret? In addition to their bill colors, their lores are also different. I must admit I find the striking colors of the Snowy Egrets very attractive. 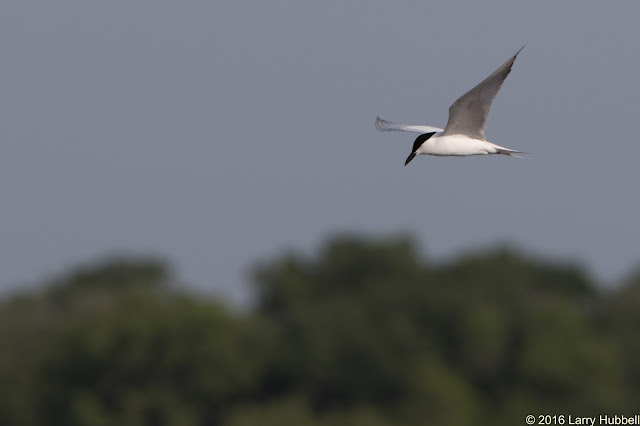 The crisp delineation of black versus white in the Gull-billed Tern is also quite striking. Breeding season in a warm climate certainly provides some beautiful birds. 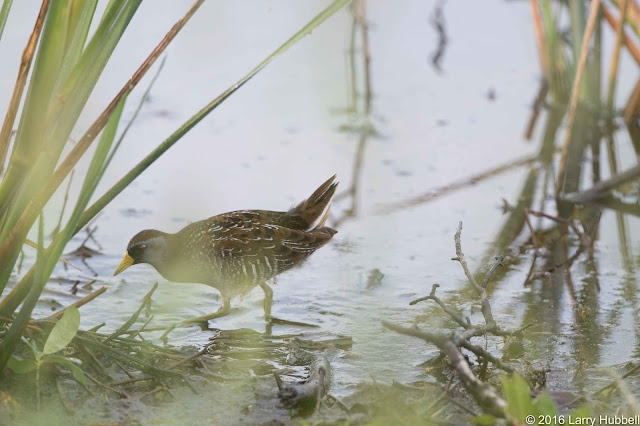 The Sora strolling along the shoreline was a quickly passing surprise. According to its range map, it should have been much further north by this point in the breeding season. 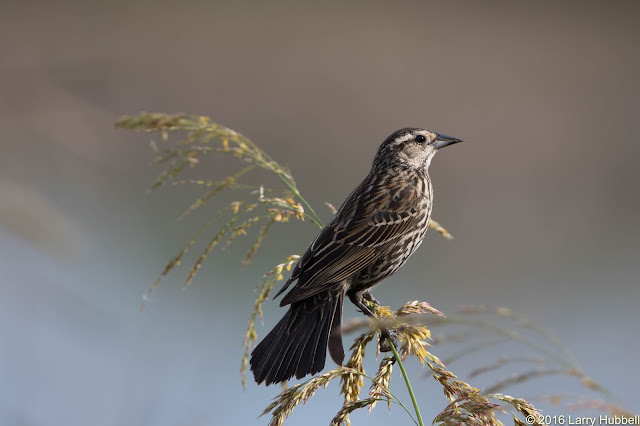 The female Red-winged Blackbird tried to help me feel at home... 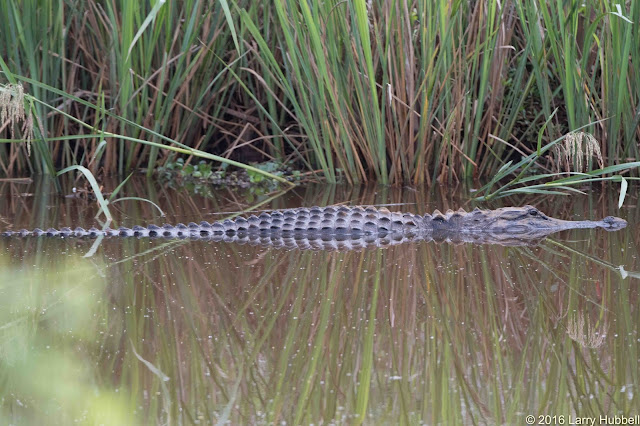 ...however the signs which said 'Do Not Disturb The Alligators' - not to mention their actual physical presence - did add a certain level of unease and excitement to the birding adventure. 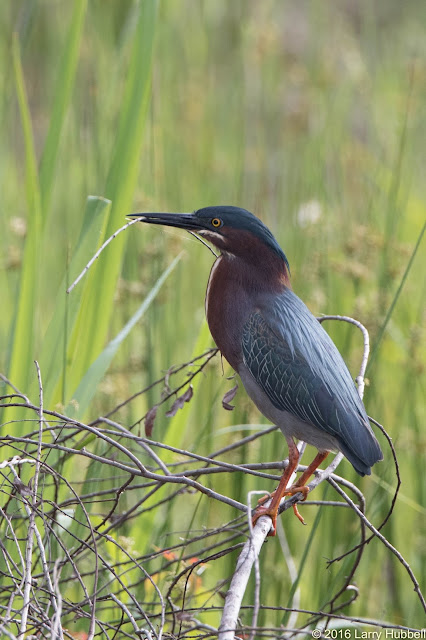 The beautiful coloring of a nest building Green Heron provided a familiar sight and had a soothing effect. 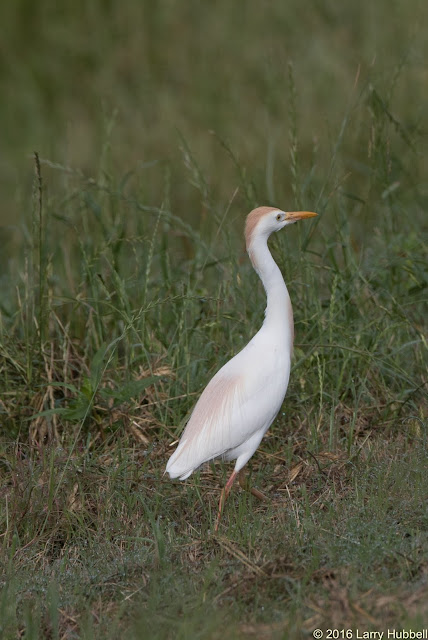 Cattle Egrets are a reminder of nature's amazing achievements. In our Master Birder Class I believe Dennis mentioned that the Cattle Egrets appear to have made their way from Africa to South America - all on their own. I wonder if they blew over in a strong wind, island-hopped or rode over on large ship. In any case, after arriving, the Cattle Egrets have certainly fanned out into all warm and available habitats. 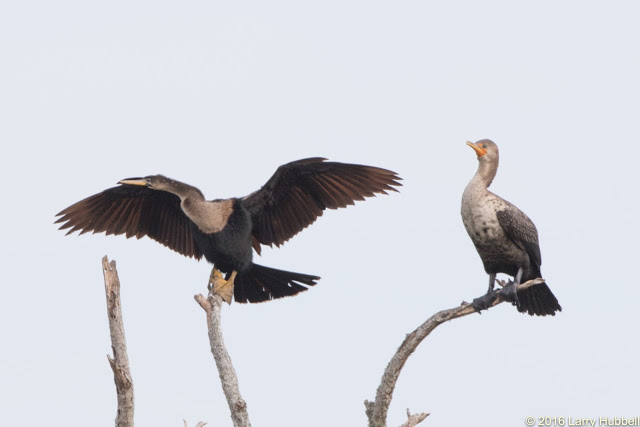 The bird on the left is an Anhinga. The bird on the right is a young Cormorant. The head does seem unusually light compared to the young Double-crested Cormorants I have seen around Union Bay, but it does not look like any other species of cormorant to me.

In regards to this birding challenge I am positive that the correct answer will show up fairly quickly in the comments section below. I hope you have fun trying to figure out the location. One last hint - while the two birding sites were both relatively close to the city in question, the locations were in two different states.