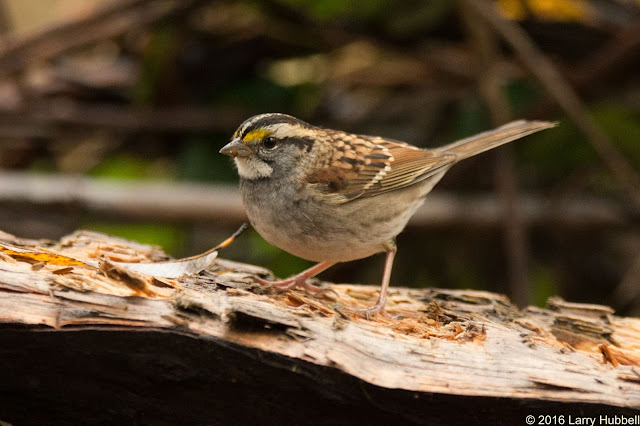 Seeing this sparrow could not have been more startling if the clouds had suddenly parted and a sparkling shaft of sunlight had illuminated the bird. 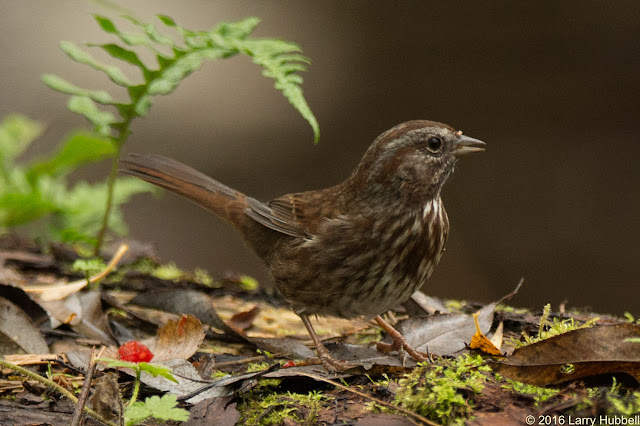 I have seen hundreds of sparrows near the mouth of Arboretum Creek. In almost every case, they are always one of these smaller, darker song sparrows. 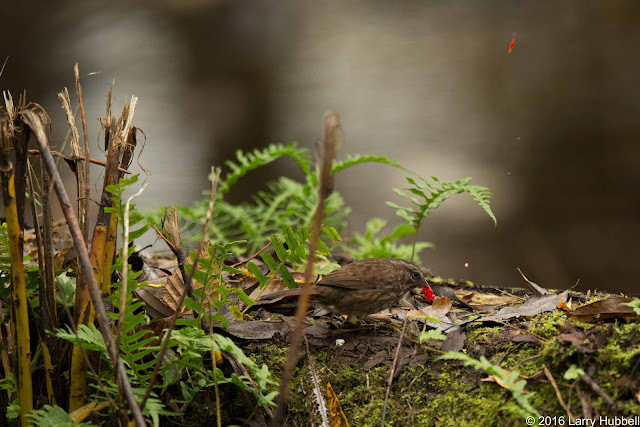 In fact just moments before, I watched this song sparrow shake off unwanted berry parts while it consumed the core of this brilliantly bright red fruit. 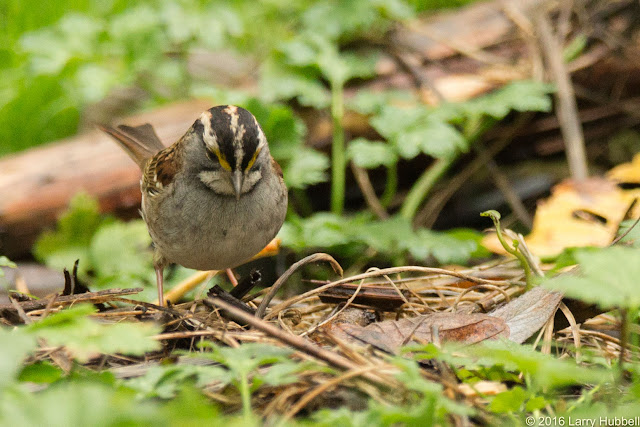 To suddenly see this bird, with its vibrant head stripes and its perfect little white bib, was a shock. Instantly, I suspected it was a bird I had never seen before. 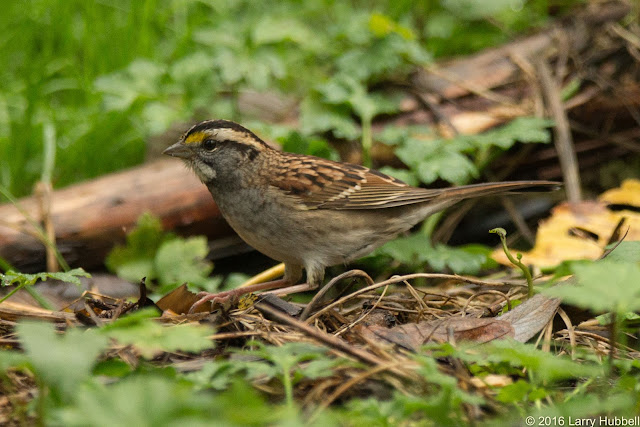 Its behavior reminded me of a spotted towhee. At first glance one might assume that the bird in this photo is simply standing and listening. Actually, it is in the process of grabbing leaves with both feet and using all of its strength and body weight - about one ounce - to throw the leaves behind it. This energetically expensive hunting strategy has its rewards. 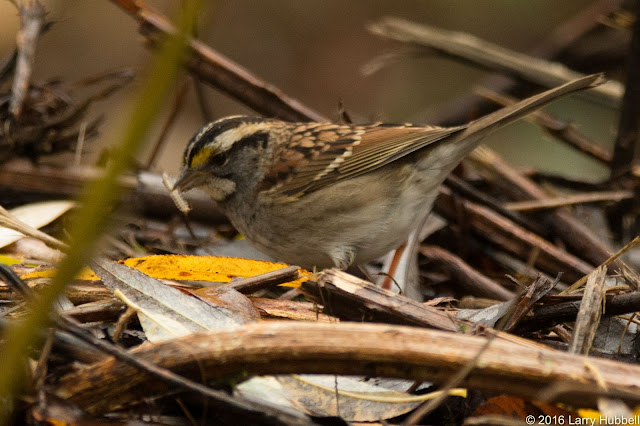 There are often even smaller creatures hiding, hunting and feeding under the leafy debris. Feeding wild birds is just one of the many reasons for leaving autumn leaves under the bushes and trees in our yards. Over the winter, the heat from the decomposing leaves will warm the living plants. In the spring, the nutrients from the leaves will augment the floral proliferation. 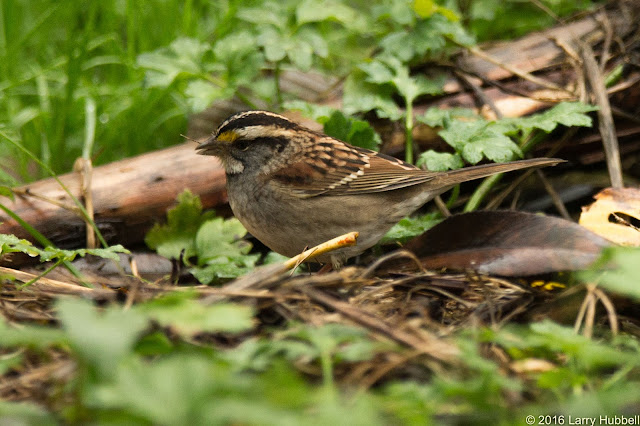 It turns out that this little bird with the calico back is very common if you are east of the Mississippi, in much of the southern half of the United States or if you happen to visit Canada in the Spring.

Seattle Audubon's online application, Birdweb, says that these little birds are uncommon to rare in Washington. If you follow the link to Birdweb, be sure to listen to the soft and melodic song of one of these white-throated sparrows. 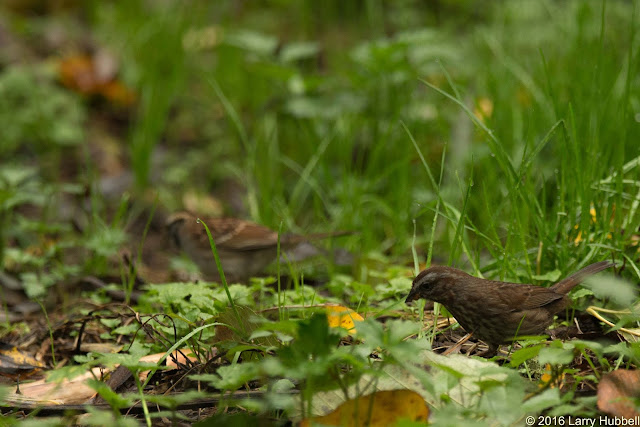 One of our local song sparrows began following the visitor as it worked its way through the standing grass and fallen leaves. 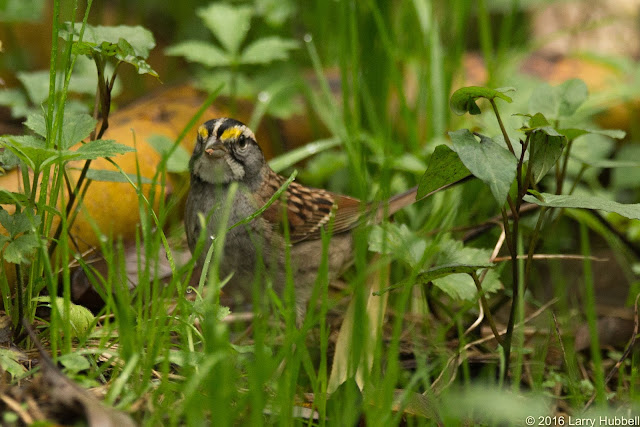 In addition to its many other colors, the visiting sparrow has two bright yellow patches just above the black stripes between its eyes and beak. These small black areas are called the 'lores' so the yellow spots above them are appropriately termed the 'supraloral' areas. The bright color is supplied from plant foods which the birds eat. 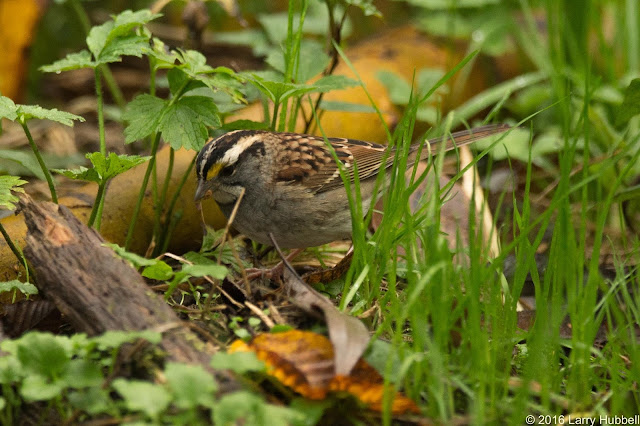 As sparrows crush seeds with their beaks, the unwanted husks are often pushed up and out onto their upper mandibles. 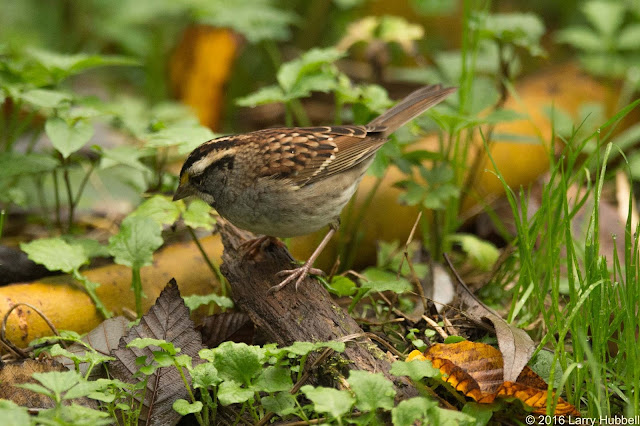 This little bird was so effective at turning over leaves and exposing food... 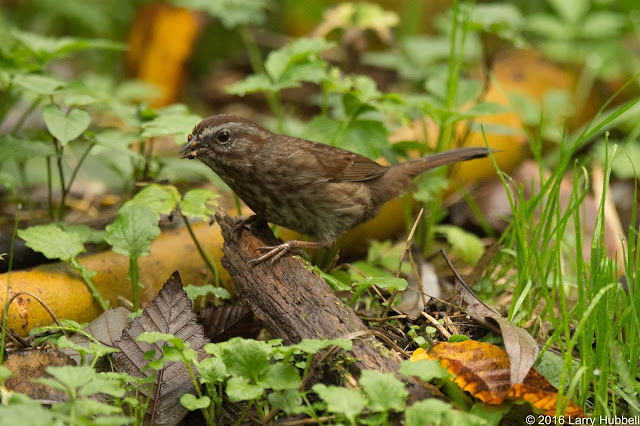 ...that the song sparrow, with its full load of husks, was following precisely in its footsteps. 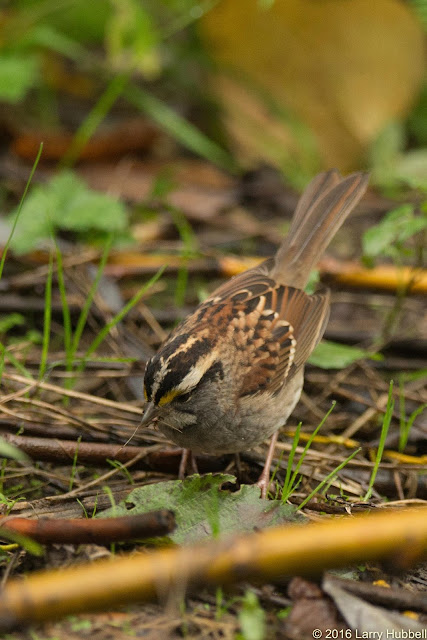 I believe the two small 'twigs' sticking out of the sparrow's mouth may previously have been the antennae of a tiny creature it just consumed. 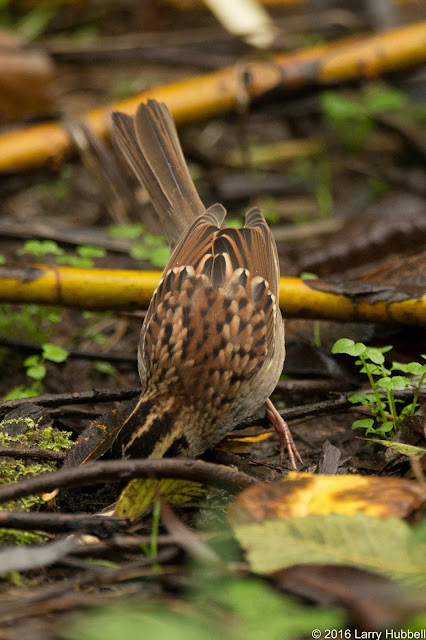 I love the way the three colors of feathers seem randomly mixed on the bird's back. I suspect if we had a bird in hand, we would find the feathers are actually symmetrically arranged, but as it moves and twists the feathers constantly shift. 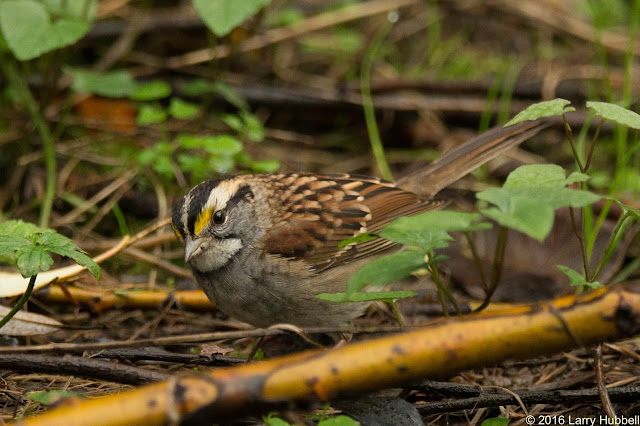 When I got home and started reading about white-throated sparrows, I found a whole new area of interest. 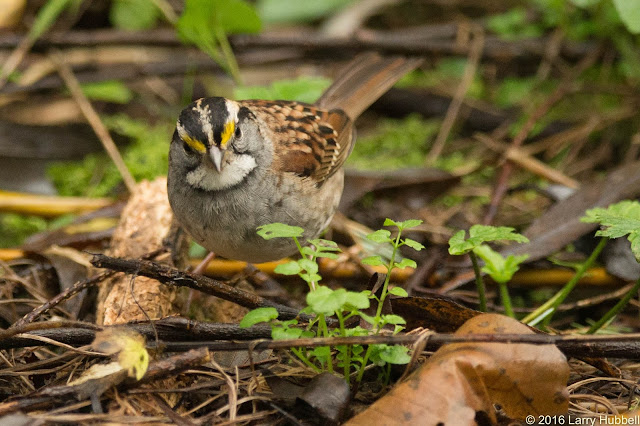 It turns out this single species is comprised of two different color morphs. One of which has white stripes on its head - like this bird - and one of which has tan stripes. The fourth photo on Birdweb shows an example of a darker, tan-striped bird. 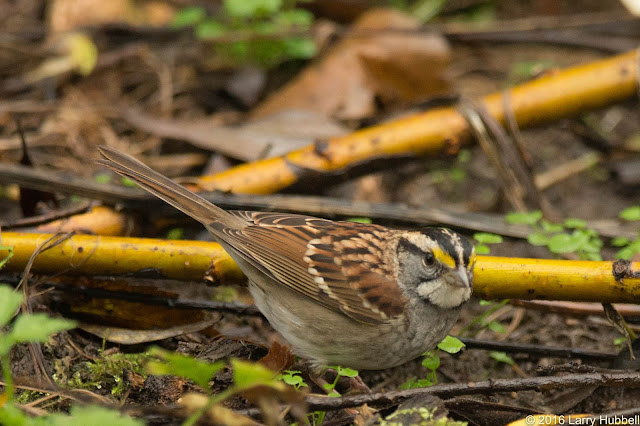 My first thought after reading about the two morphs, was to assume that each type was in the process of evolving into its own species. 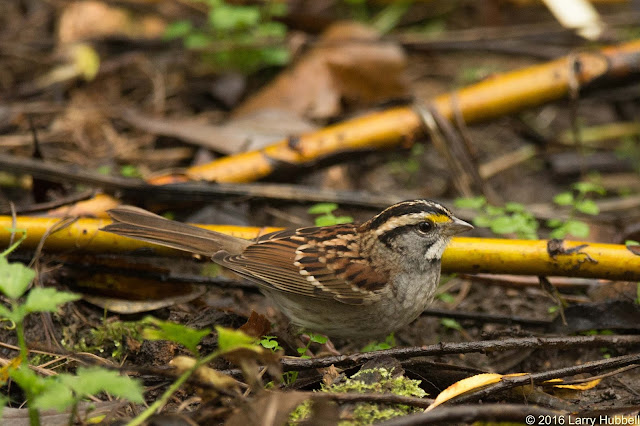 As I continued to read, I soon discovered an even more surprising situation. 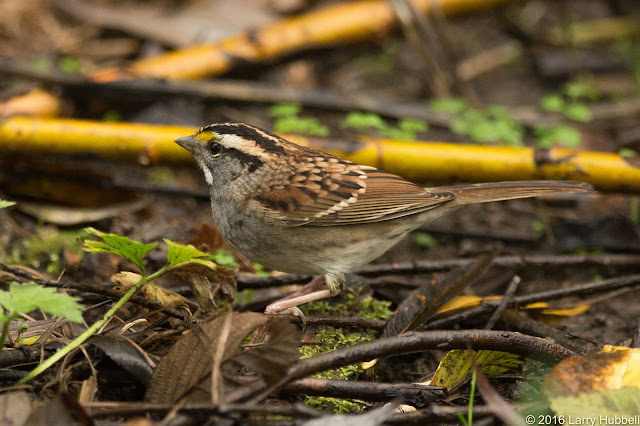 Oddly, since the genetics are nearly constantly and evenly mixed, the young birds from either mix of parents tend to be about one half tan-striped and one half white-striped. Apparently, this ongoing mix of color morphs may continue indefinitely without either morph becoming a new or separate species. I have never heard of anything like this before.

This strangely balanced situation reinforces my awe at the bewildering array of behaviors and species in nature. I personally believe that this is the result of millions of years of evolution. On the other hand, if you believe this is the handiwork of an all-powerful creator, it should change very little about our respective views of nature. In either situation, the diversity of wild creatures around us should be considered an incredible treasure to be protected and conserved.

A couple of kind readers have noted a wonderful article regarding the research and life of a devoted scientist for whom this little bird was her life's work. It is fascinating! I hope you enjoy it.