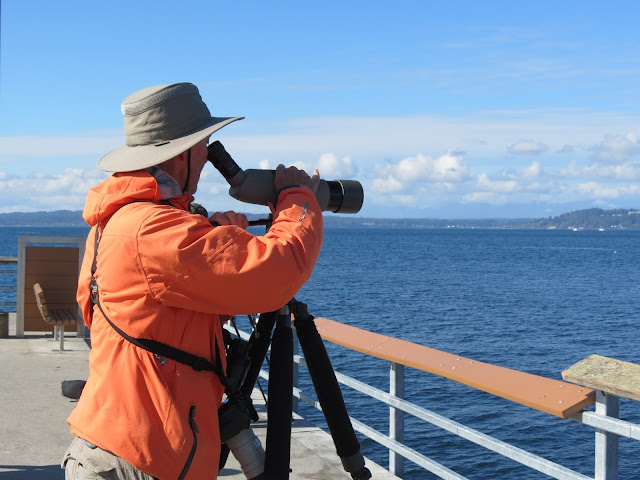 Joe Sweeney in action. Thank you to Lynne Smith for providing this photo. 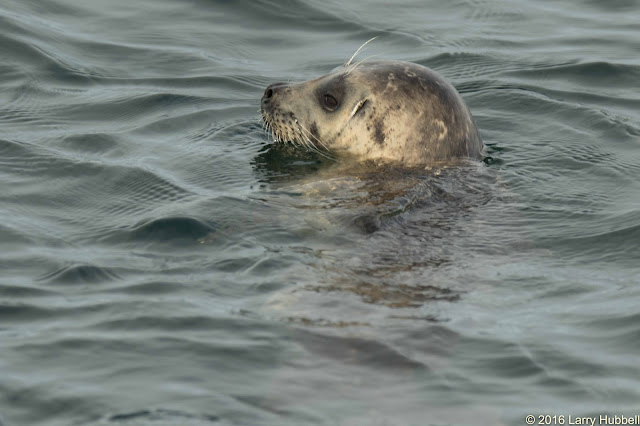 One of our first signs of life as we approached the pier was a harbor seal. 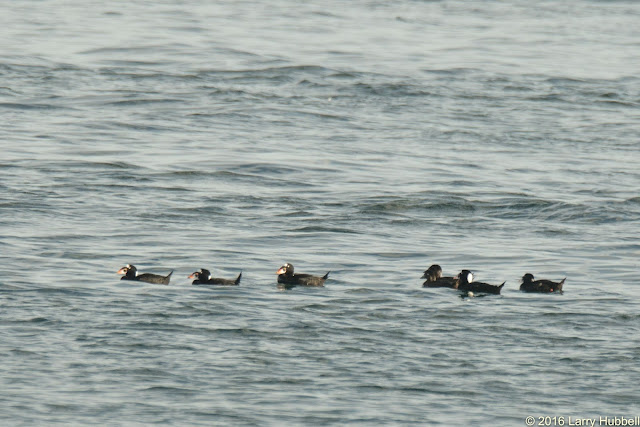 From the pier, we watched male and female surf scoters heading south with their heavy, shell-crunching bills. 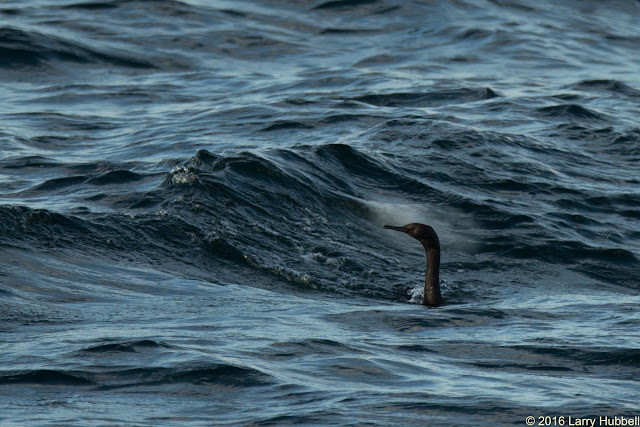 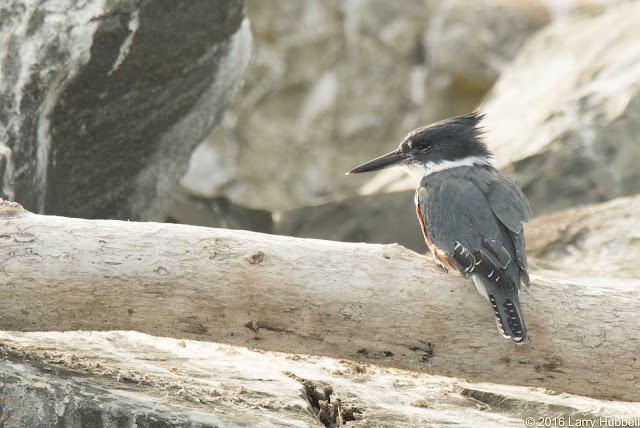 We saw and heard a female belted kingfisher. Just like great blue herons and double-crested cormorants, the kingfisher does not discriminate against water (or fish) based on the salt content. 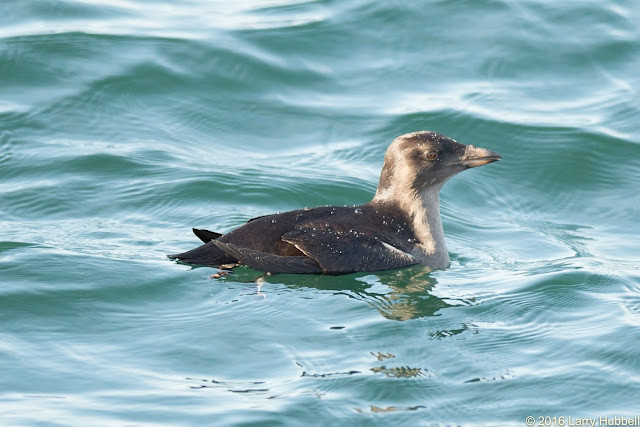 We saw a number of rhinoceros auklets and even debated whether we saw a Cassin's in the distance. The rhinoceros name is evidently inspired by the 'horn' they grow from the top of their bill during breeding season. You can see one of the horns by Clicking Here.

Earlier this month, I posted photos of the American White Pelican. They have a somewhat similar appendage during breeding season, but the precise location, color and scale are different. You can compare the differences by Clicking Here. 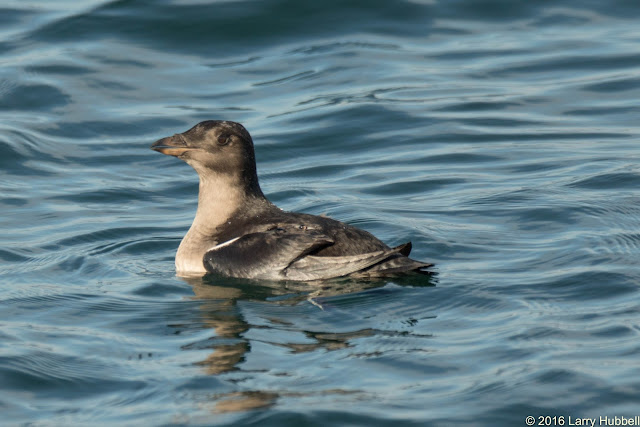 This 'rhino' seemed to be the only auklet who was willing to venture close to the pier. Please note the small white 'trim' on the leading edge of its wing. 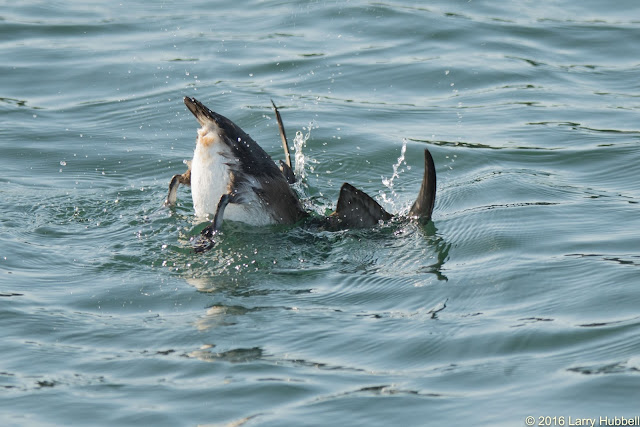 The auklet dived repeatedly with its wings extended. Their wings are used for underwater propulsion as well as for flying. 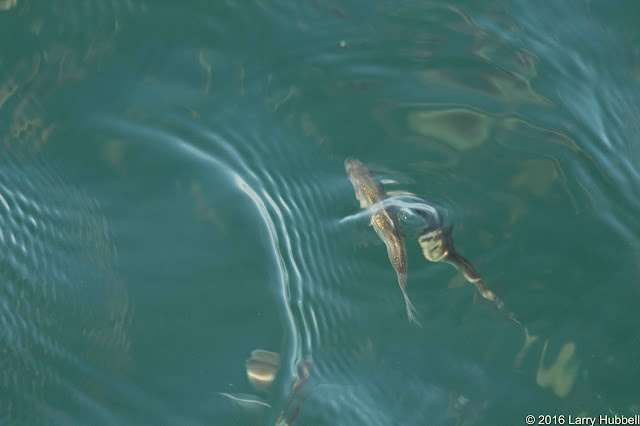 There was a large school of fish below the south end of the pier. Dennis Paulson - renowned naturalist, scientist, author and the instructor of our Master Birder Class - pointed out that the fish were shiner perch and part of an exceptionally large school.

After this photo was taken, I noticed a faster reaction from the fish whenever the auklet dived. Suddenly, the water closest to the auklet would be instantly empty. Beyond some invisible line, the fish would seem twice as dense as normal.

In the last photo, I suspect the distorted figure - just to the right and below the fish - may be the auklet. I think the little white line on the wing may be the same white line we saw in the earlier photo. 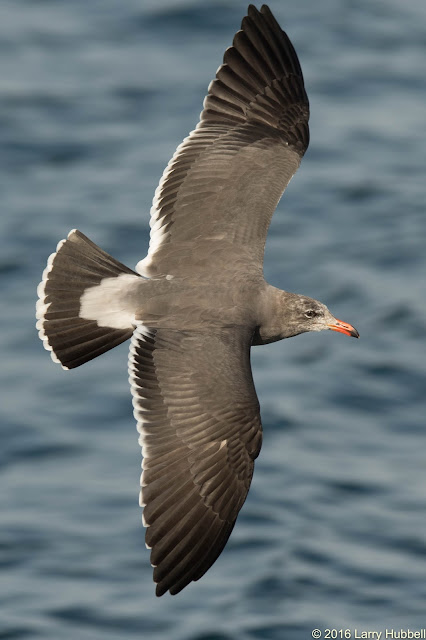 Other birds besides the auklet began paying attention to the fish. I think the Heermann's Gulls are my favorite gulls. I love their dark colors, white trim and uniquely orange beaks. Their special coloring makes them very easy to identify. 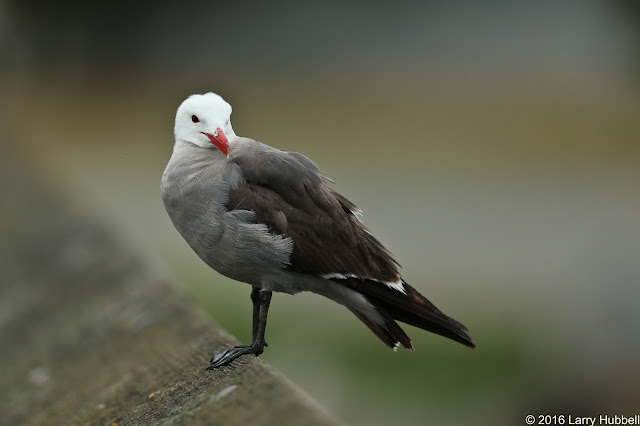 This Spring photo from Port Townsend shows a Heermann's in breeding plumage. The pure white head makes them even more appealing. 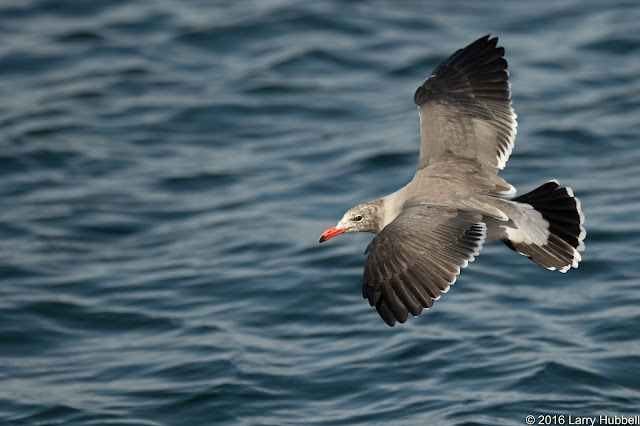 The gulls would circle around to the north and then come back swooping low over the water, while searching for unsuspecting fish. 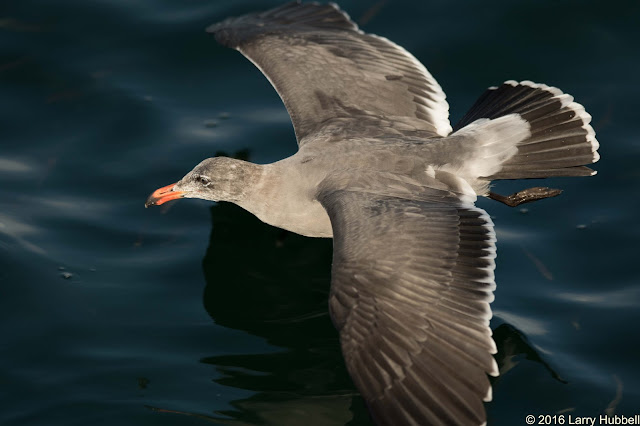 Notice how the gull is almost touching the water's surface. 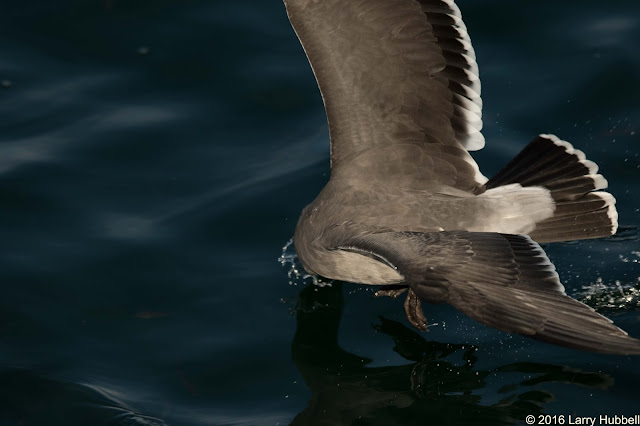 In mid-flight, the birds would stick their heads below the surface while attempting to catch fish. The feet fly forward as the water slows the bird's progress. 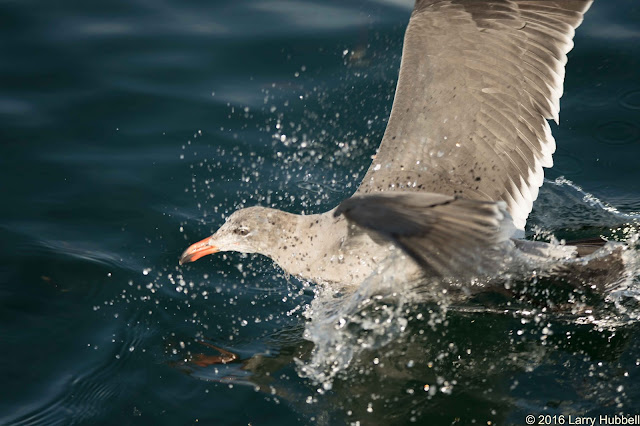 The result was a significant splash and this time the lucky fish got away. Occasionally, the gulls would actually catch one of the perch. Sadly, I was unable to capture the moment. 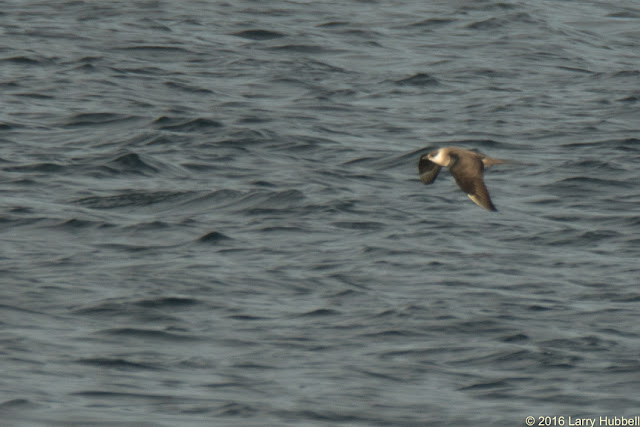 The highlight of our visit was a somewhat distant but distinctive viewing of a Parasitic Jaeger. 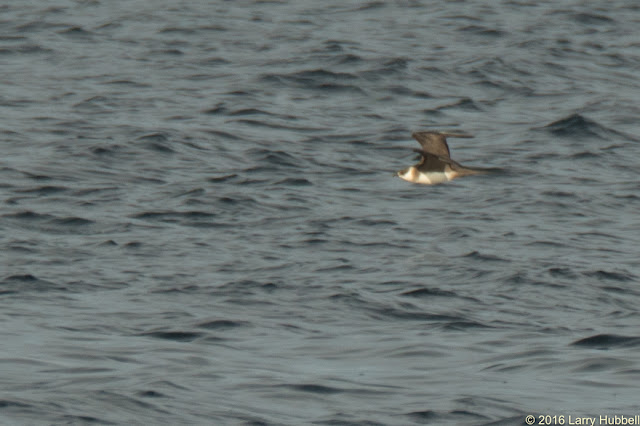 Parasitic jaegers nest in the Arctic and winter in the Southern Hemisphere. Their name comes from their habit of chasing other birds and harassing them into disgorging and dropping their prey. In this photo, the small white space between the bird's dark cap and its dark bill distinguishes it from its relatives. Plus, the other two jaegers species seldom come even this close to shore. 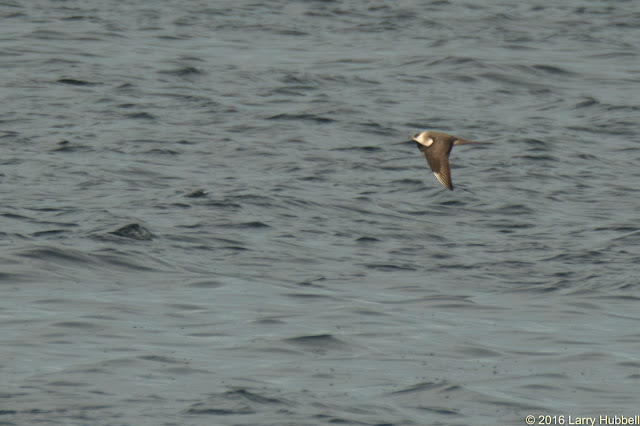 A huge THANK YOU! to Joe Sweeney for finding and pointing out this unique bird. It was a first for me! Earlier this month, Joe had a much closer encounter with a Parasitic Jaeger. You can learn all about it in the first link below and see more of his photos by visiting his other two sites.

Have a great day on Union Bay...or you can add a little salt to your life by visiting the Edmond's Pier.

1) In a surprising turn of events, Thursday morning Kate, the young female osprey from the nest at Montlake Fill, was seen multiple times in and around the nest. Myself and others had not seen any of the osprey for nearly a week. I was starting to think they had all headed south for the winter.

On Thursday, Kate was generally quiet. She was not begging incessantly as she had been when other family members were present. I am wondering if she is now totally on her own. I am particularly curious to know if anyone has seen her successfully fishing and feeding for herself.

Kate is unique compared to the other members of her family because: a) Unlike her parents, she has white edging on her dark brown feathers on her back and b) Unlike her brothers, she has a distinctly visible brown 'necklace' on her otherwise white chest.

2) A Great Horned Owl was spotted in the Arboretum Thursday morning by Kelly Brenner - Author of the Metropolitan Field Guide. Luckily, the large owl hung around for awhile. This was my first ever sighting of a great horned owl in our Union Bay neighborhood. Thank You - Kelly!

3) Sadly and surprisingly, a reader reported a sighting of a dead seal south of Yesler Swamp. If anyone has information regarding the seal's demise I would be curious to learn more about the situation. Hearing about the seal surprised me, especially since I have only seen them near salt water. Thank You - Hannah.

4) Dennis Paulson graciously reviewed the fish photos in my previous post, Adios Amigos. I have updated the post with his improved identifications and comments. Thank You -  Dennis!