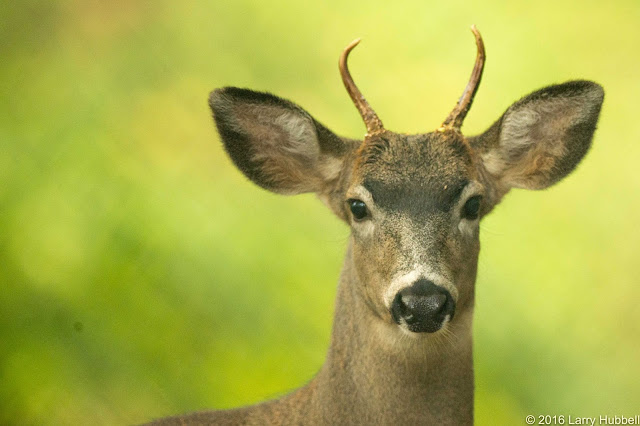 On Monday I finally found my first deer in the Arboretum. I did a double take and wondered, could this be Lefty? If you missed the original post, Lefty is the young buck photographed by Peter Korch in the Union Bay Natural Area last July.  The Natural Area is about a mile north of the Arboretum. The only direct walkable surface connection is across the busy four-lane Montlake Bridge. On the other hand, deer can swim.

After Peter's initial sighting, Lefty was seen off and on. He was spotted north of the Montlake Bridge, later he was seen going west onto the upper part of the UW Campus and afterwords back in the Natural Area. 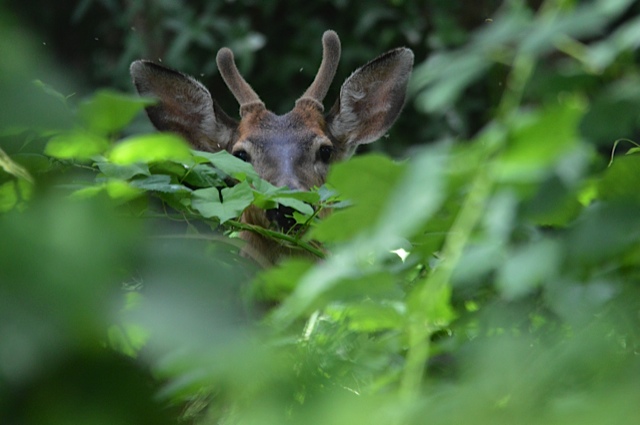 For comparison purposes here is one of Peter's photos from last July.

If this is Lefty, his antlers have grown. His left antler (on our right) is noticeably taller in both photos. The most obvious difference or change is the absence of velvet. As part of a male deer's preparation for mating season, they rub the velvet away. The velvet helps to promote the growth of a deer's antlers. The new larger version of the antlers helps the male deer to dominate and chase off competitors. If you happen to spot a western red cedar with the bark missing from its lower branches, it was likely caused by Lefty polishing up his new and improved antlers.

Lucky for Lefty, who appears to be experiencing his first fall as an adult, there do not seem to be any other competing males in the area. I did hear that a female had been spotted, but I have not yet seen her. It would certainly be exciting to have little 'Lefties' in the Spring. 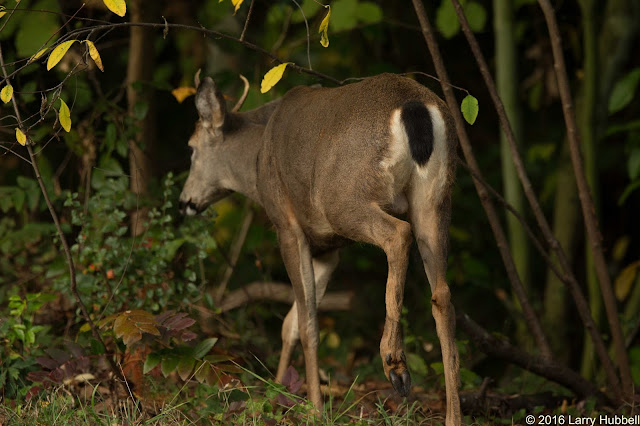 After reading the descriptions of Washington deer on the Washington Department of Fish and Wildlife website, I am now positive Lefty is a Columbian Black-tailed deer and not a Mule deer. His tail fits the description and the fact that he is still hanging around Union Bay, in a relatively small territory, and his being west of the Cascades are all consistent indicators. 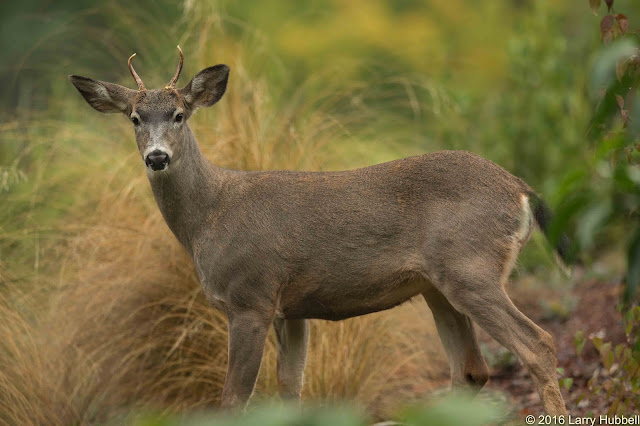 On Monday, Lefty was wandering through the area called the Pacific Connections in the south end of the Arboretum. He seemed to really enjoy the fairly open area which contains a variety of plants, trees and grasses from New Zealand. When the trees reach maturity this area will transform into a forest, but currently it looks more like a meadow. Kathleen DeMaria, along with a group of dedicated volunteers, provides the daily care of this young and healthy three year old forest in the making. 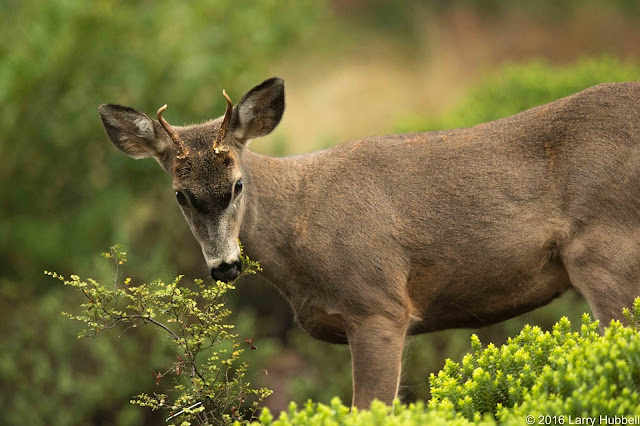 I am pretty sure Lefty has no idea how exotic some of these plants are. They are green and he is hungry. 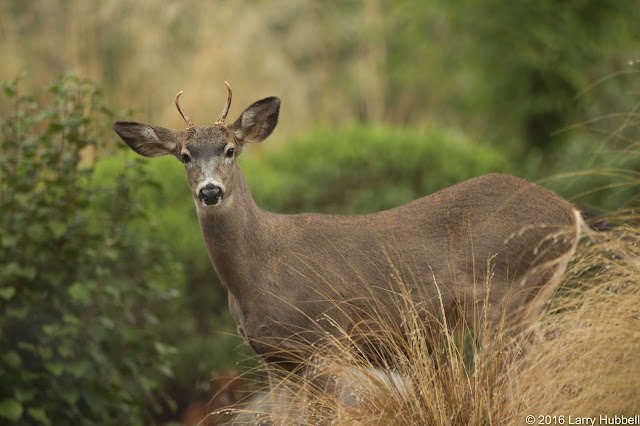 Lefty is still a bit shy. His distrust of humans is good for him and us. We do not want to feed or tame him in any way. If he starts coming close to people, someone may feel threatened and then he may have to be 'removed'. If we want to live in harmony with Lefty (and nature in general) maintaining a mutual distrust and distance is a healthy approach. 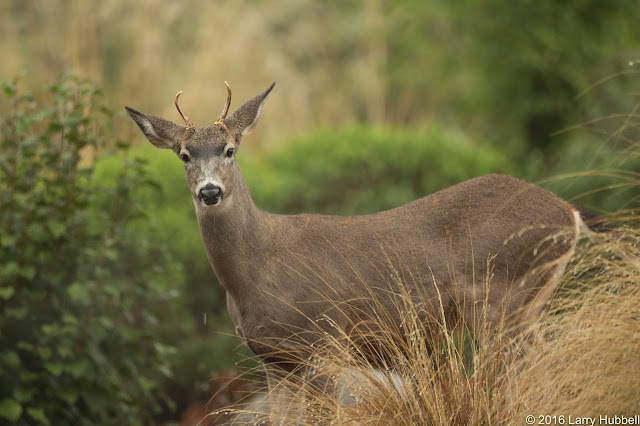 When Lefty gets nervous he flicks his ears back and forth. I suspect he is listening for sounds that indicate danger. If you click on this photo, and then page back and forth between the prior one, you can see how much control he has of his magnificent listening devices. 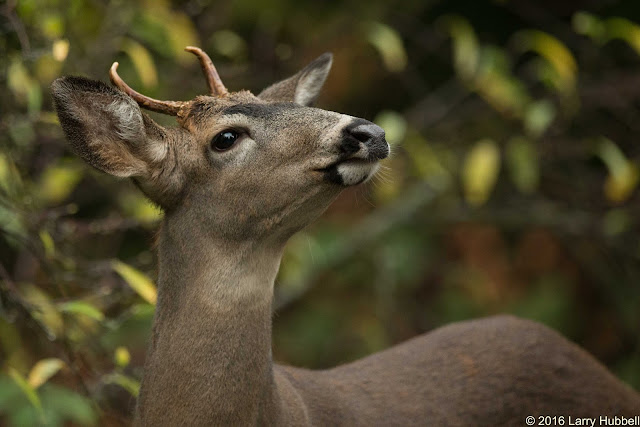 When his ears and eyes don't provide sufficient information, Lefty raises his nose and searches for airborne scents. Usually, when he catches the scent, sight or sound of my daughter's dog Ginger, he moves away. On Monday, I was glad that I had Ginger on her leash, as usual. When she thought Lefty was coming too close she started barking defensively and pulled against the leash - attempting to chase him. Clearly, if Lefty is going to hang around and feel comfortable in the Arboretum, we will all want to keep our dogs properly restrained. 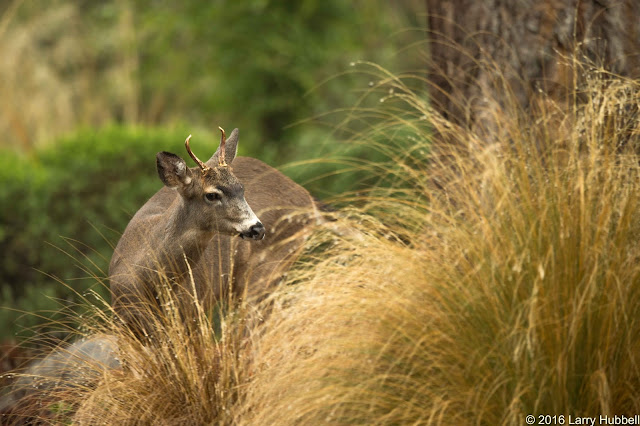 The Washington Fish and Wildlife website also mentioned that male Black-tailed deer usually weigh between 140 and 200 pounds. It seems odd that a creature that large can be hard to spot in the Arboretum, especially with all the crisscrossing trails and a steady stream of visitors. 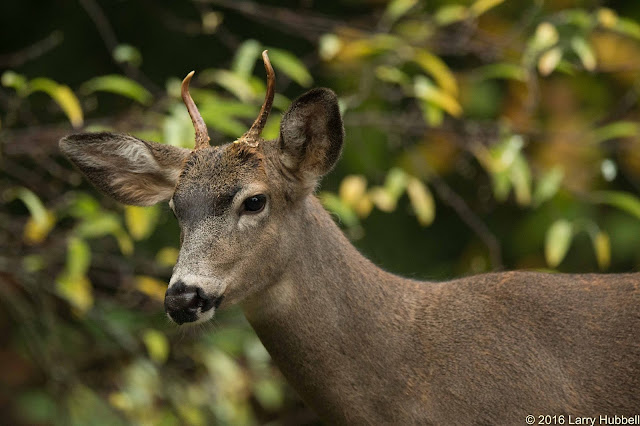 Stephanie, one of the instructors for the Fiddleheads outdoor preschool, mentioned that she and the children went looking for Lefty one morning last week. They spent the morning searching, but never found him. The children returned to their outdoor classroom feeling let down and disappointed. As Stephanie began to document their failure to find Lefty, she and the children looked up just in time to see Lefty passing through the edge of their 'classroom'. I suspect these children will never forget the experience. Hopefully, Lefty will be around in the years to come so future preschool classes can have a similar experience. 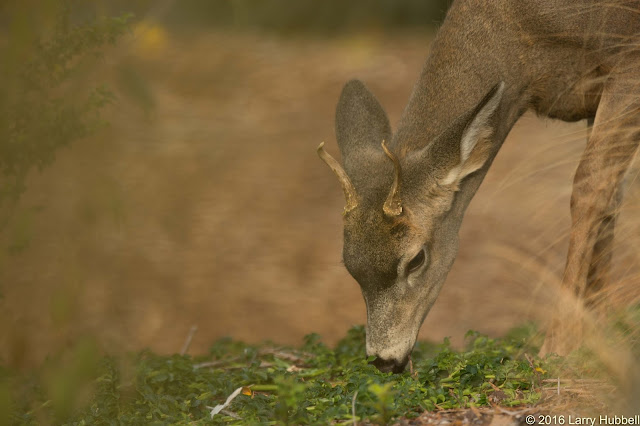 On Tuesday morning, I saw Lefty again, eating one of the New Zealand plants. I also noticed Kathleen, the Horticulturalist, walking in his direction. Erroneously, I assumed Kathleen did not realize Lefty was in front of her. 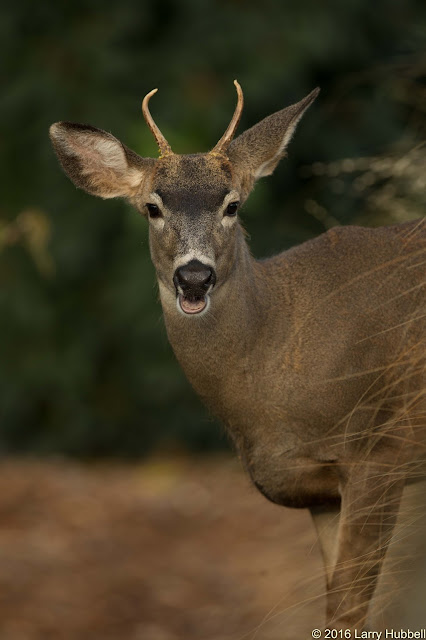 Apprehensively Kathleen walked directly toward Lefty and shoed him away from the plant. Afterwords. she noted that her primary concern was for Lefty, not the plant or even herself. Kathleen went on to explain that this common and important New Zealand plant can be toxic and is dangerous to consume. 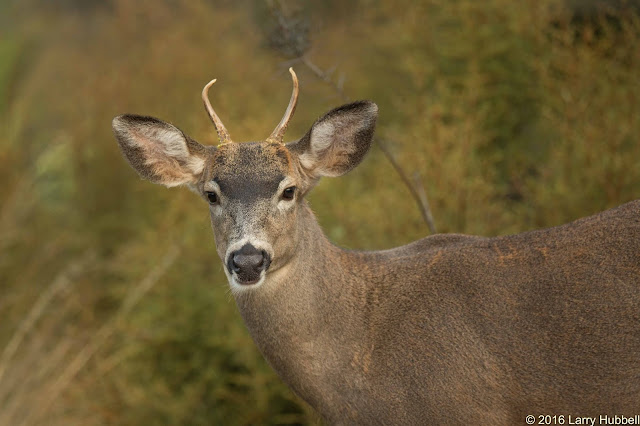 Lefty leisurely sauntered away. Later, after I mentioned the situation to Kelly Brenner, she found this post from Alaska which explains how deer can consume poisonous plants. Of course Lefty's situation may be unusual because the plant he was eating is not native to North America. I have no idea if his body can handle the plant or not. 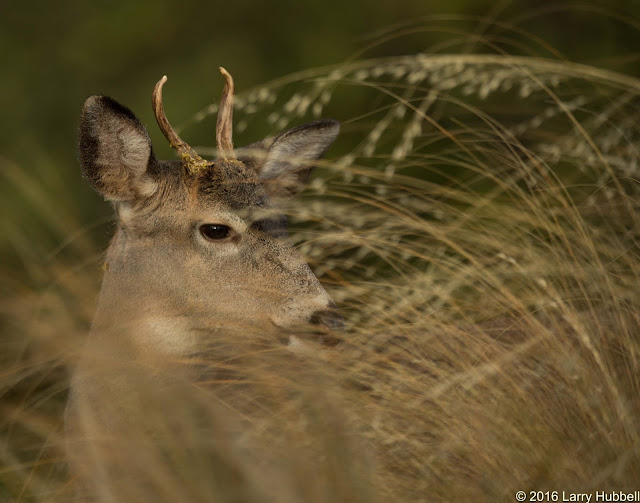 I have been out looking for Lefty a couple more times this week, but so far I have not found him or the female deer. In addition to non-native plants and off-leash dogs, Lefty will also have to deal with this weekend's stormy weather. I hope that next week we find Lefty and his potential mate, and they are both alive and well. It seems I will be once again looking for Lefty.

Have a great day on Union Bay...where Lefty lives in the city!

ps: My wife just mentioned that if you are a member of Montlake Nextdoor you should be able to search and find photos of what appears to be a female deer seen near the Arboretum. The photos were posted on October 6th and 8th 2016.