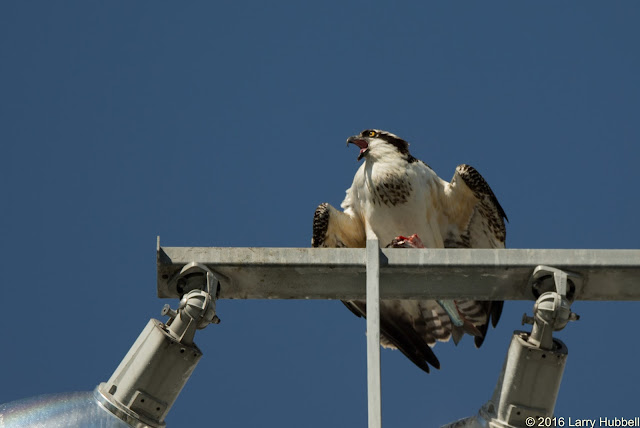 On Monday afternoon, Kate, our youngest female osprey, appeared to be begging for food. It sounded like she hadn't eaten for a week. 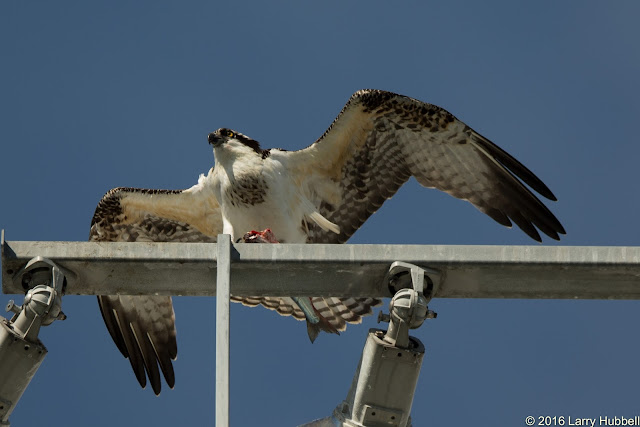 On closer inspection I noticed the partially consumed fish in her grasp. Given the size, shape and color, I suspected it was a large trout or steelhead or possibly even a small salmon. Trying to estimate the size and type of fish made me wonder which fish osprey prefer. I decided to do a quick review.

Dennis Paulson - renowned naturalist, scientist, author and the instructor of our Master Birder Class - graciously agreed to review the fish photos in this post. The following updates through out the post are from Dennis. I am very grateful to Dennis for my continuing education in birds, fish and nature in general.

Dennis, 'I think the salmonid in this first photo is a Sockeye Salmon, as I don't see any spots on the back and fins that would indicate Coho or Chinook or Steelhead. Also, Sockeye is very common in Lake Washington'. 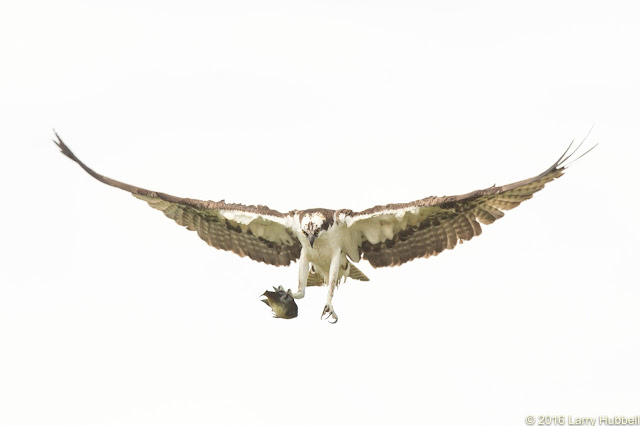 On July 10th, Chester, Kate's father, appeared with some type of sunfish or perch. In any case a small fish which was almost as tall as it was long.

Dennis, 'The second photo is a sunfish, but I can't see enough detail to go beyond that'. 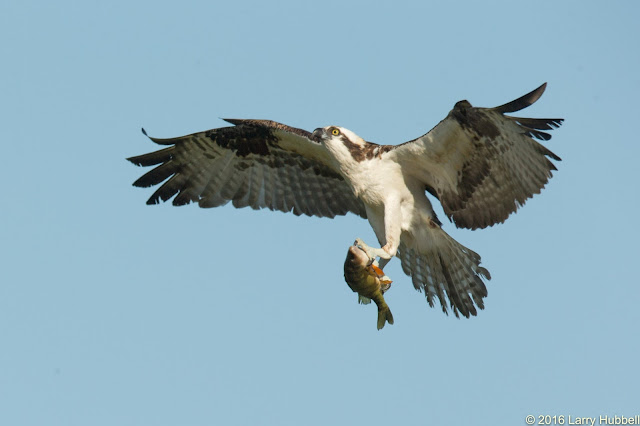 On July 24th, he snagged a smallmouth bass.

Dennis, 'The third and fourth photos are Yellow Perch'. (After learning that these were yellow perch, I noticed the visibly larger size of the yellow-perch dorsal fin compared to the smallmouth bass. If you zoom in on the next photo it is especially obvious.) 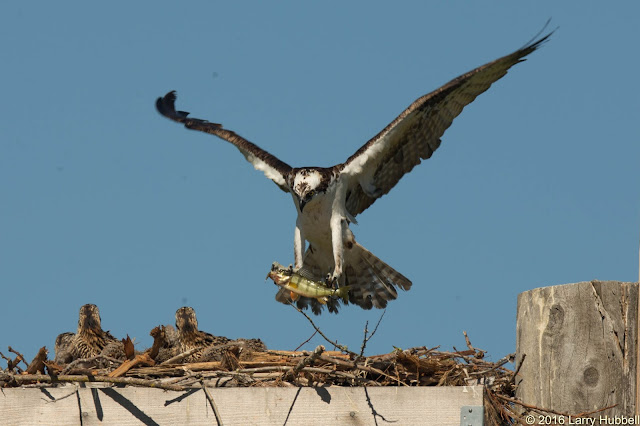 An hour and half later he returned with another one and displayed it very nicely. It is interesting to note how small Kate and her brothers were just two months ago. 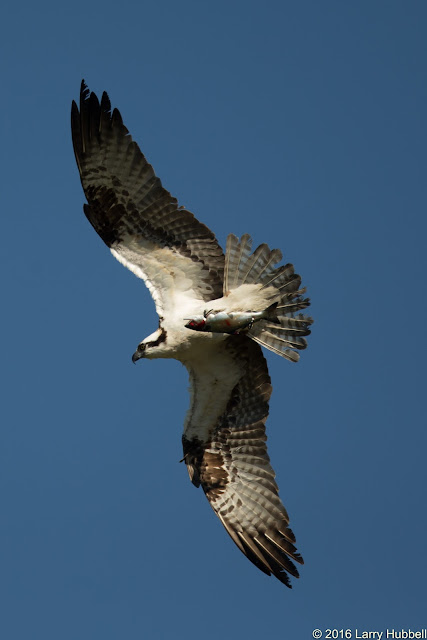 On July 29th, it looked like Chester caught a trout. 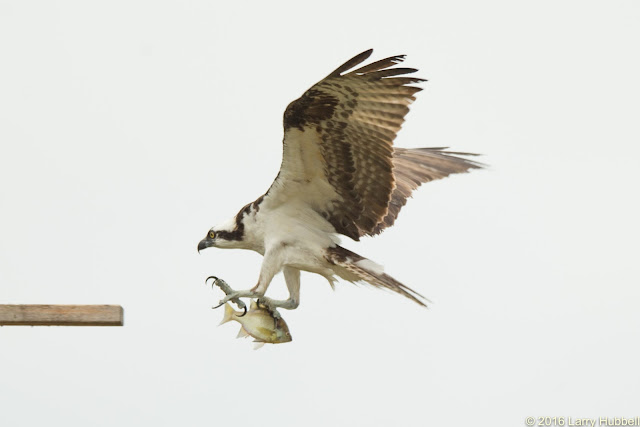 On August 7th, he returned with another sunfish.

Dennis, '#6 has me completely stumped. It looks as if it has to be a member of the bass/sunfish family (Centrarchidae), but I can't put it in any species. Possibly a crappie from shape, but some things aren't quite right for those two species either'. 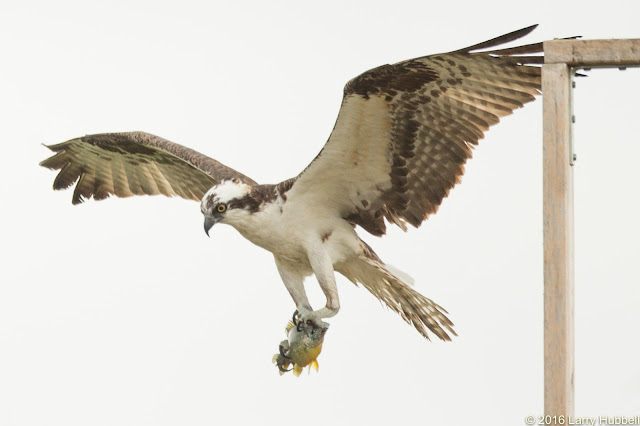 An hour later he had what looked like a bass. It is obvious osprey love fish. At the same time, our limited sample seems to show that they do not discriminate against any particular species. Chester's preference appears to be...anything with fins.

Dennis. '#7 looks like a Pumpkinseed, a very common sunfish in Lake Washington'. 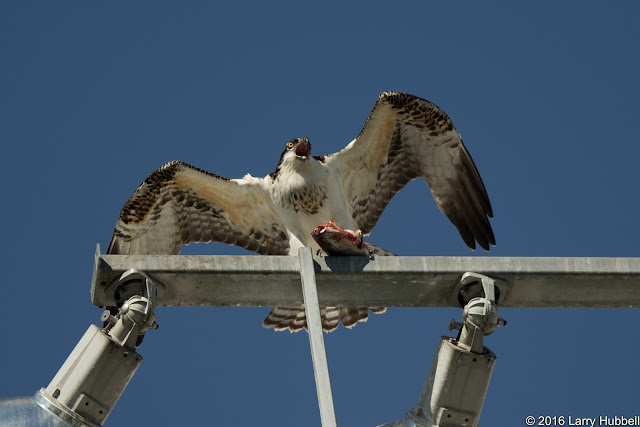 Returning to Kate and her fish above the UW baseball field, I realized she must not be very hungry given the partially-consumed state of the fish. However, if she wasn't hungry then what was on her mind. When she turned her head, I followed her gaze. 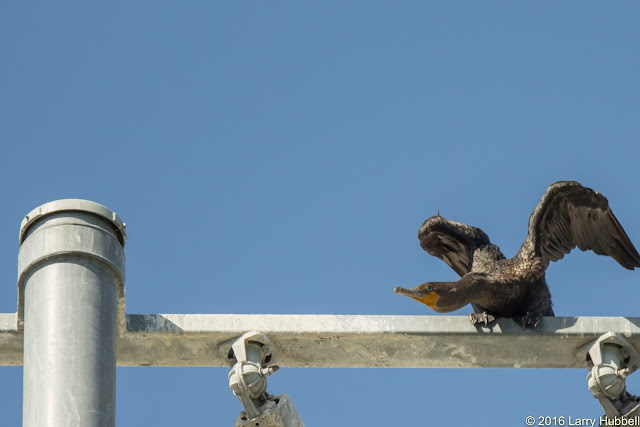 At the other end of the center-field light pole was an obviously hungry double-crested cormorant. Kate was apparently feeling defensive. 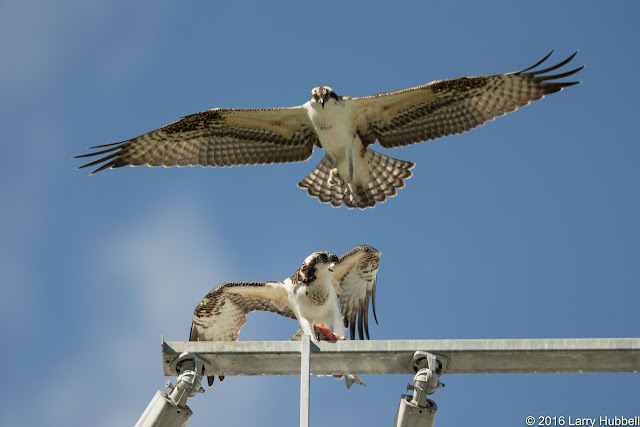 Suddenly, her cries grew even louder when one of her brothers arrived.

As Wilbur hovered over her, I began to wonder if Kate would abandon her fish. After watching her begging for food, while her brothers were eating last week, it certainly seemed like she deserved to keep this fish.

Note: If you look closely you can see dark brown coloring on the front of Wilbur's legs. As far as I can tell this may just be individual variation. If you glance back at the Chester-with-fish photos, you can see that the coloring on Chester's legs is far less pronounced. 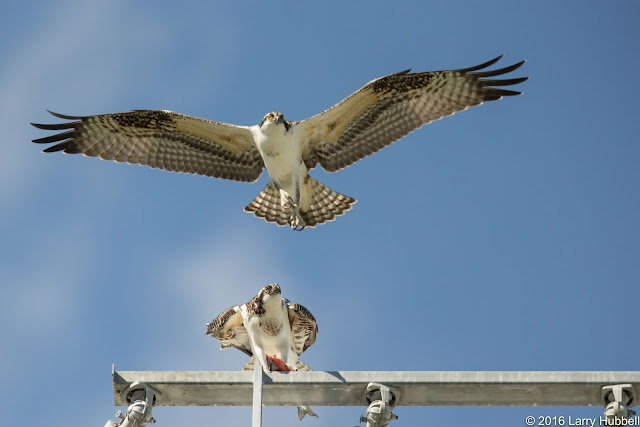 It was windy enough that Wilbur was able to simply hang in the air without even flapping his wings. There was no doubt in my mind, his intention was intimidation. He hung there for a full 15 seconds, while his 'fingers' at the ends of his wings were constantly adjusting for changes in the wind. Kate did not budge. Finally, her brother grew tired of balancing in the wind and landed beside her. As he edged closer, Kate extended her wings - apparently setting limits on his approach. 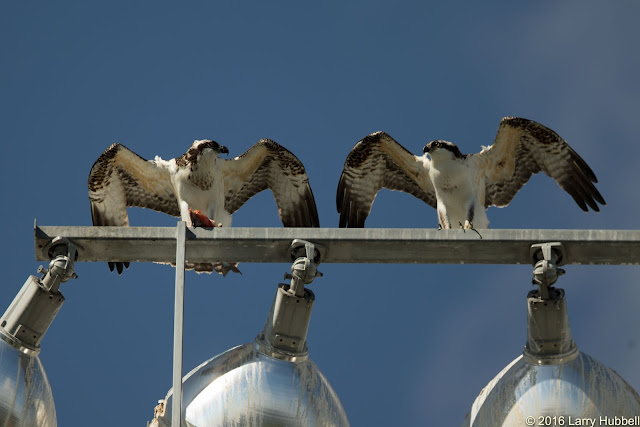 Face to face, eye to eye and nearly toe to toe it became clear this battle was psychological, not physical. 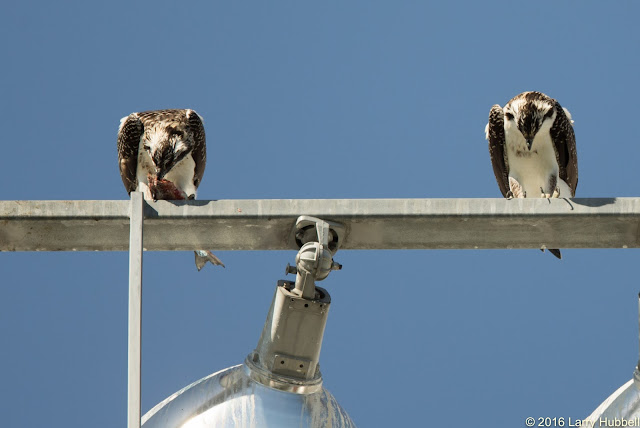 The moment Kate returned to eating it was obvious she had won. Her brother lowered his head and left, defeated. 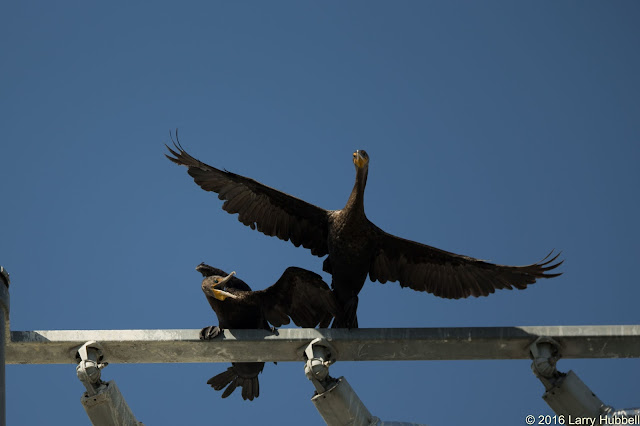 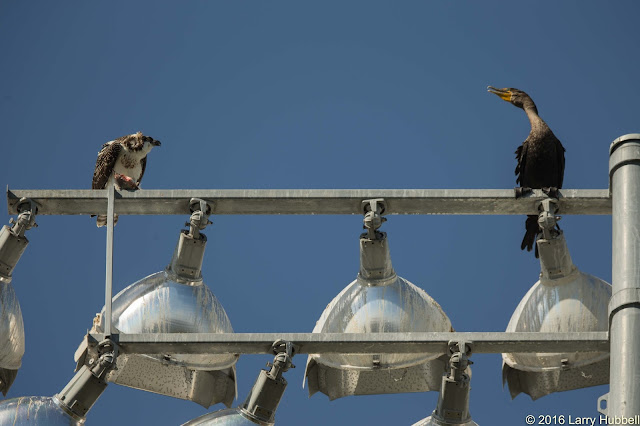 The bravest of the dark diving birds landed on Kate's side of the light pole. 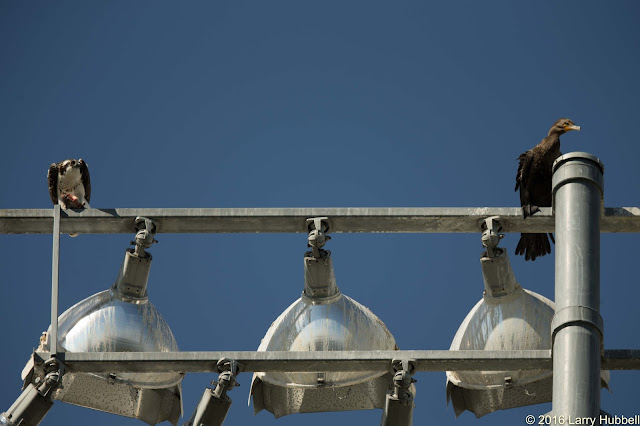 Kate's predatory stare seemed to take the edge off the cormorant's boldness. 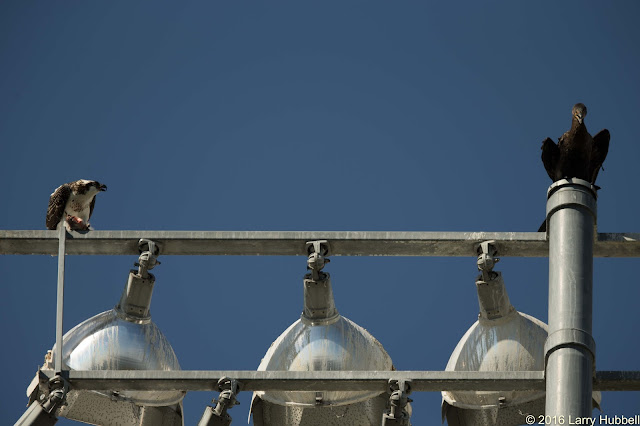 He slowly sidled further and further away. Finally, all the cormorants gave up and left. 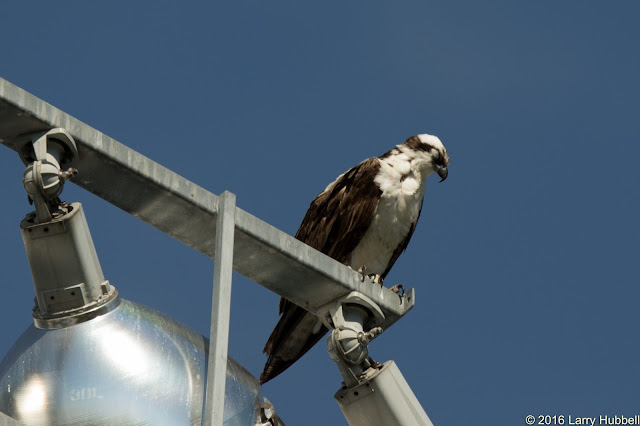 During the whole process Kate's father, Chester, sat silently, one pole to the west. With his eyes often closed he was apparently sleeping and storing up energy - preparing for migration. It is interesting to compare his dark-brown coloring with Kate's. 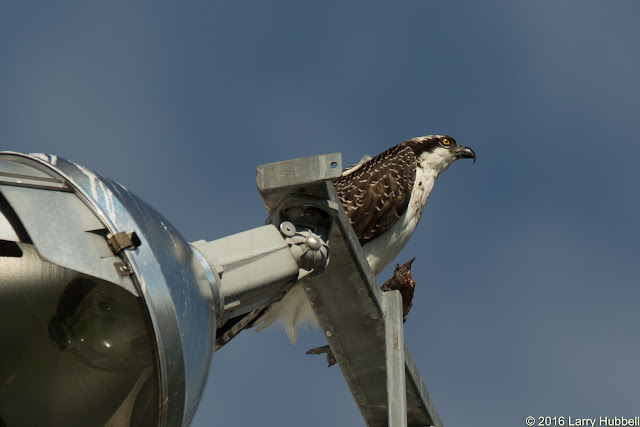 Given a similar angle, we can clearly see all of the delicate, white edging on Kate's wings, but we can rest assured that there is nothing delicate about her spirit. 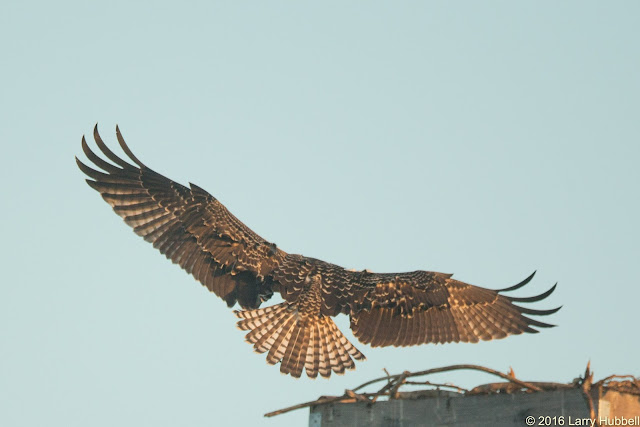 The next morning I returned to find Kate and one her brothers hovering around the nest. I just never tire of looking at the crisp, clean feathers of the young birds. This photo seemed like the perfect parting shot.

Last week, we saw Chester bring in food for all three of the young. However, there was no sign of Lacey, their mother and I have not seen her since. On Monday, we saw Chester with just two of the young. Yesterday, when he delivered food there was only one of the young to receive the fish. I have no way to be positive when migration begins. They are spending less and less time around the nest. Soon - they will all be gone.

If you are lucky enough to winter in Mexico, you may spot one of them hovering above the surf near some warm and sunny shore. Otherwise, we will just have to console ourselves with waiting for their return, next Spring.

Have a great day on Union Bay...where once again osprey raise young in the city!

Bill Anderson just reminded me that the young osprey will most likely stay in Mexico all of next year and only return North to nest in 2018 - after they are fully mature. Chester and Lacey should be back in 2017 and hopefully reuse the same nest site. It will be interesting to see if their unique combination of markings makes them identifable as individuals next year - even after they have molted and replaced many of their feathers. Thank you, Bill!
Posted by Larry Hubbell at 12:02 PM