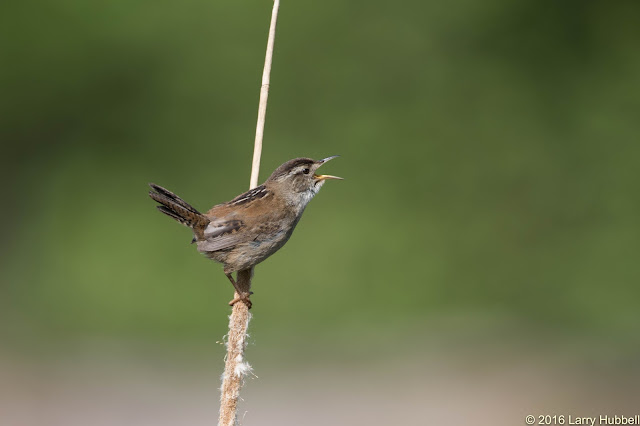 One of the loudest proponents of Spring in the Union Bay Natural Area is the marsh wren. 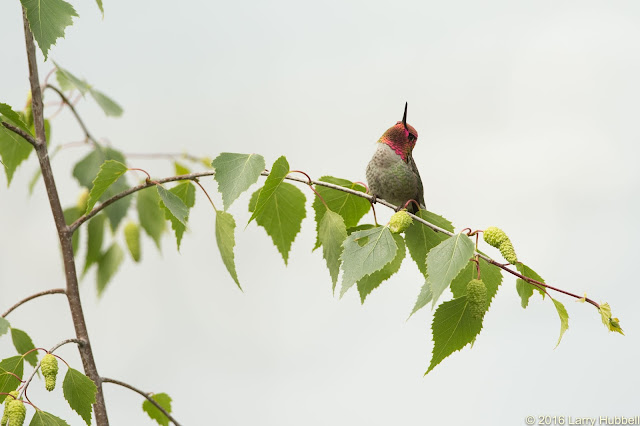 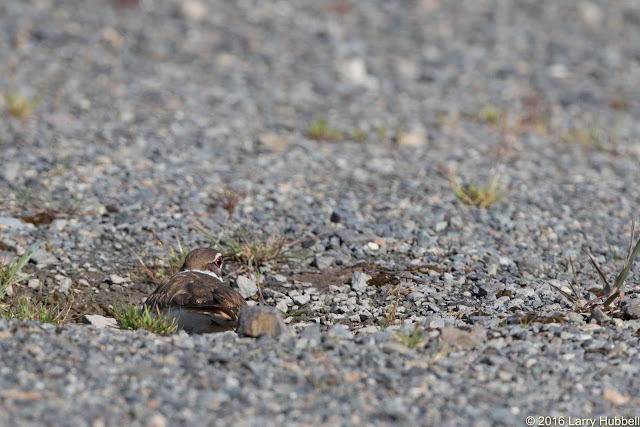 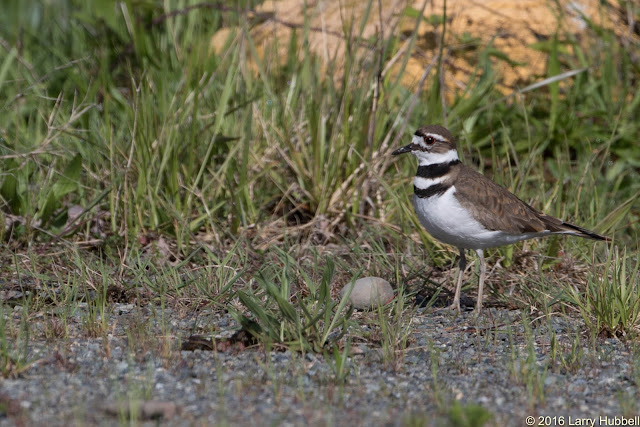 While reviewing the photos, I momentarily wondered if this second killdeer was trying to trick me into thinking the rock was an egg. 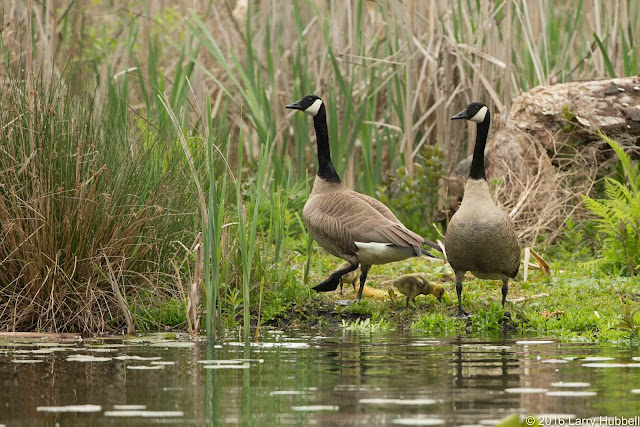 It was nice to see Canada geese goslings during the last month. 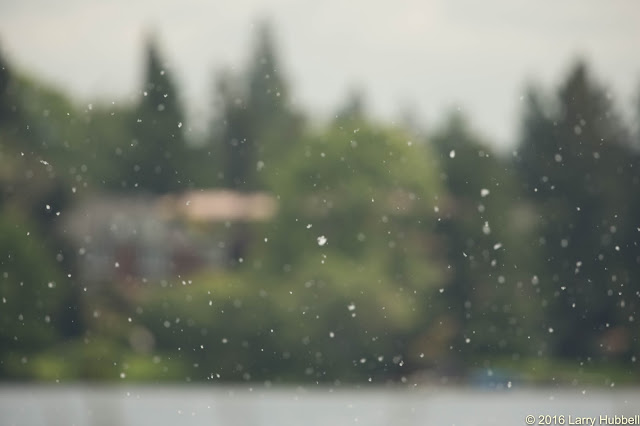 One of the wonders of Spring is the simultaneous falling of cottonwood down and... 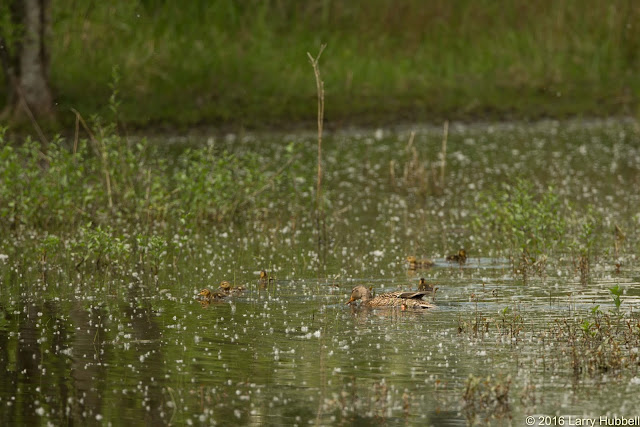 ...the appearance of mallard ducklings. The seeds, hidden in the floating down, appear to be the ducklings first critical food source. 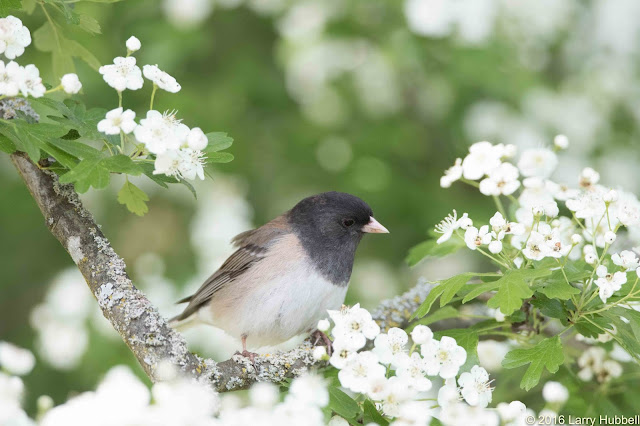 The dark-eyed junco in the midst of the hawthorn blossoms also creates an image of Spring. 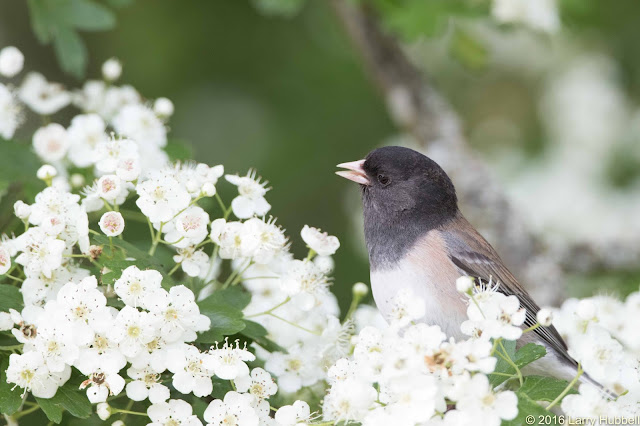 At first I could not determine what the bird was doing. 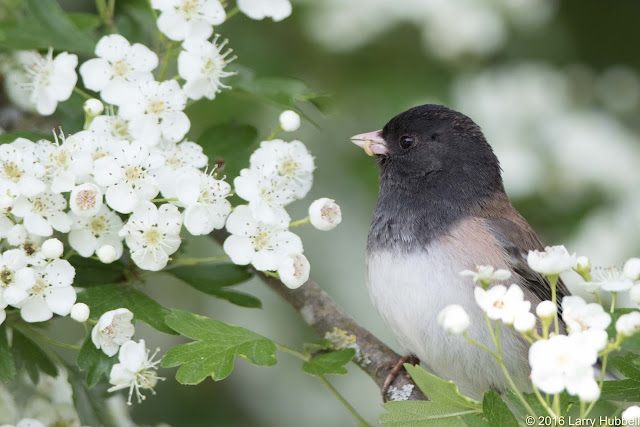 As I looked closer, I noticed a small off-white worm. 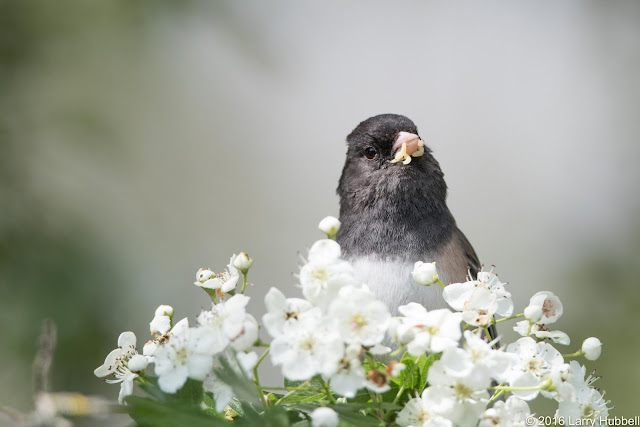 The junco collected additional specimens as it flittered from one blossom to next. 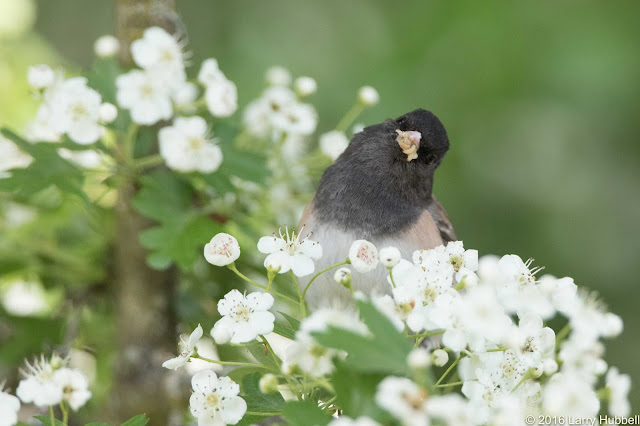 I began to wonder how many little worms the junco could carry. 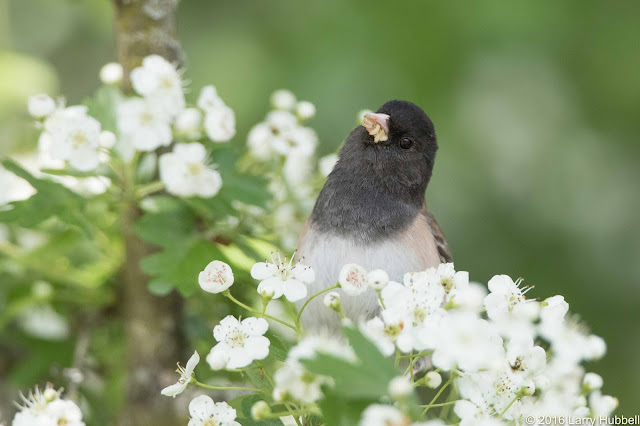 It must take a great deal of self-control to carry food around in your mouth without eating it. 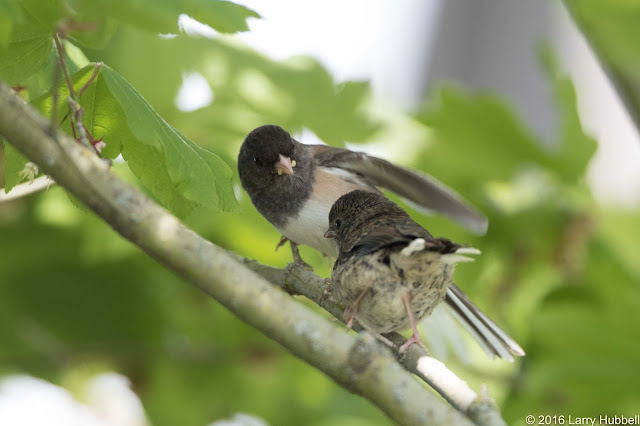 The junco revealed its purpose when it flew to a nearby tree and began feeding a young fledgling.

I was surprised to notice a number of differences between the young bird and the parent. The young bird's early plumage is sprinkled with speckles both above and below. Most of its coloring does not completely match the adult, including the color of the beak. Also, I see the head of the fledgling as closer to dark brown, as opposed to the gray-black on the adult.

I did find three areas where the colors of the two birds seem fairly consistent. Can you pick them out? My answers are displayed below the next photo. 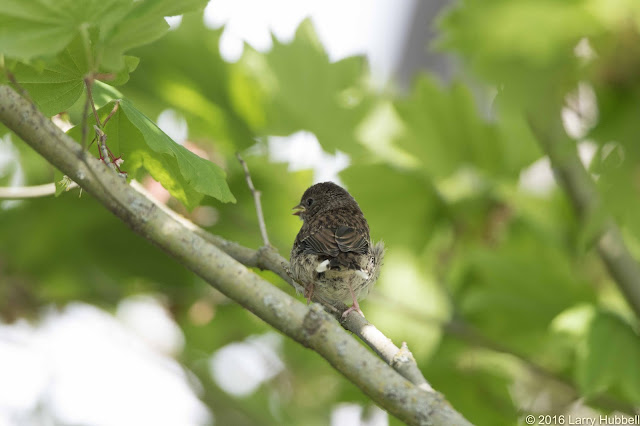 In general, the most consistent factor in the fledgling's coloring is camouflage. It seems clear that this early plumage is designed to help the young bird survive during the early days  - while learning to fly and identify danger.

The three commonly colored areas I noticed are:

1) Their eyes,
2) Their legs and
3) Their white outer-tail feathers.

I admit that noticing items two and three from the photos is a bit of a challenge.

The adult's pink legs are only visible in the first junco photo, while the fledgling's legs are visible in both of the last two photos.

A couple of weeks ago I learned that most birds retract their tail feathers in the same way. Most end up having their central feathers on top of the closed tail and their outer tail feathers fold into place underneath. This explains why a junco's tail appears dark from the top and light from below. In the next to last photo, the white outer tail feathers are visible on both birds. 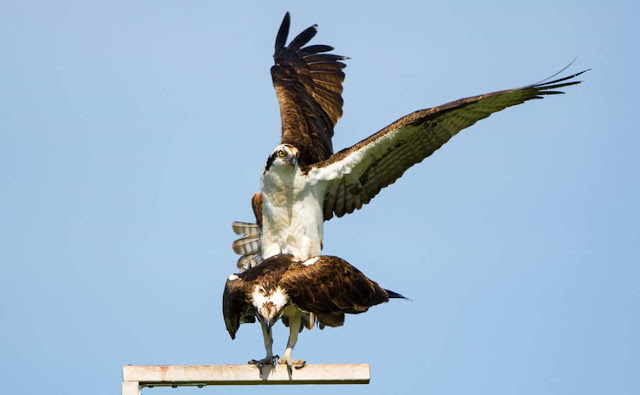 This week I received the following email.

Hi Larry,
New to this site.
This is my osprey picture on Tuesday morning.
Soo Hong Goh-Baus

Soo Hong, Thank you for the great capture! Not only have the osprey started the process of producing eggs, it looks like the eggs are laid and they are now taking turns brooding e.g. covering and protecting the eggs with their bodies.

This week, Jim Kaiser, the biologist from Osprey Solutions, sent in an email that stated,

"The adult female was observed in incubation posture (laying horizontal  in the nest)..."

Thank you Jim! I too have been seeing the same posture and position all week. 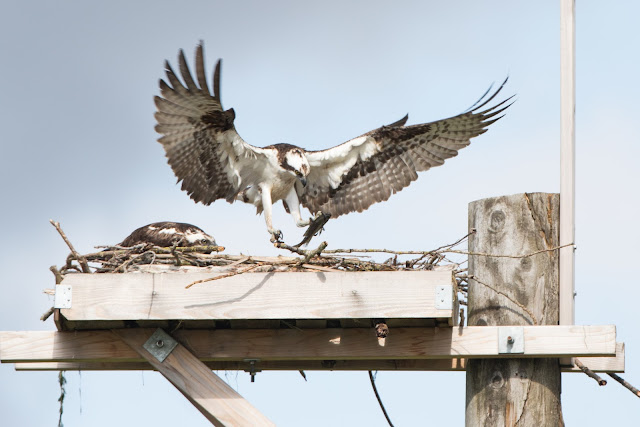 Yesterday one of the adults brought a fish back to the nest. 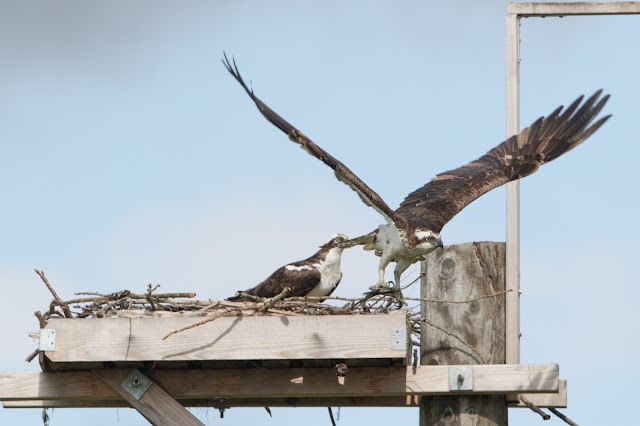 The two birds traded the fish and apparently their responsibilities as well. 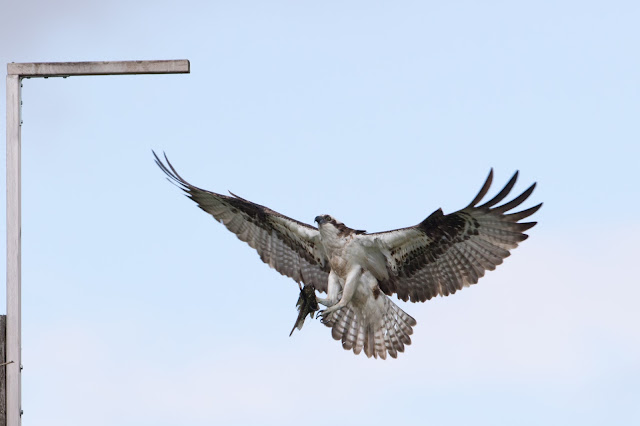 The hungry bird simply circled around and landed on the raised perch. 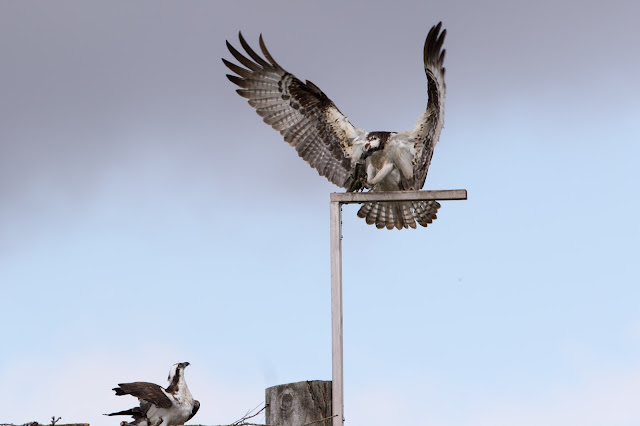 The fish was quickly consumed.

As I mentioned in the last post, Jim suggested we give the birds a little space - watching from the bench to the east of the platform - for the first few weeks while they get their eggs laid. Jim says that ultimately osprey are not nearly as shy as many other birds. This is good because everyone who passed the nest yesterday morning was clearly impressed and attracted by the sight of osprey. The excitement of seeing the birds nesting and feeding was almost like electricity in the air.

It has been a long tumultuous adventure for the osprey, but finally they appear to be approaching their goal of raising young on Union Bay. If you would like to read about their history here is a list of relevant posts.

Opportunity Knocks - May 2015 - The idea of a osprey nesting platform on Union Bay.

The Wildlife News - Sept 2015 - The osprey fail to use the new platform (page down to the middle of the post to see the update.)

Dancing With Osprey - April 2016 - The osprey return but choose to build on a light pole above the athletic fields - instead of on the designated nesting platform.

A Symbiotic Hope - April 2016 - The osprey nest is removed from the light pole.

Osprey Update - May 2016 - The osprey finally begin nest building on the platform in the Union Bay Natural Area.

Finally, this week nesting behavior is confirmed and it appears that eggs have been laid. In the coming weeks as you watch the osprey and this wonderful process unfold there are a number of participants who deserve our thanks.


Thank you one and all!

Have a great day on Union Bay...where osprey nest in the city!