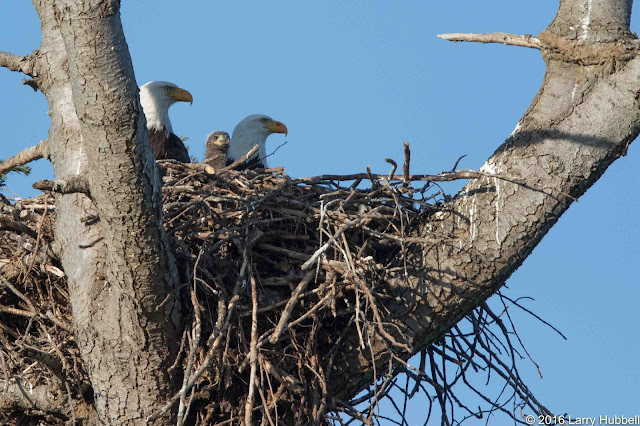 Imagine the only life you have ever known has been in a six foot circle far above the earth. You are surrounded by activity. Most mornings, earthbound humans scurry off to work or school. Distant workers look like little ants as they construct the new 520 highway. Directly below you humans with the luxury of time, skip little white balls across the carefully manicured grass. None of this disturbs your regal repose. You rest above the world like a king on a throne.

Even in your awkward youthful state you know you were born to rule. Your parents bring you all the food you can eat. The menu makes it obvious they are apex predators. Figuratively and literally you are at the top of the food chain. A world full of opportunity stretches out below you. It is all just waiting for you to venture out and stake your claim. To the casual observer your life might seem as easy as a fairy tale. 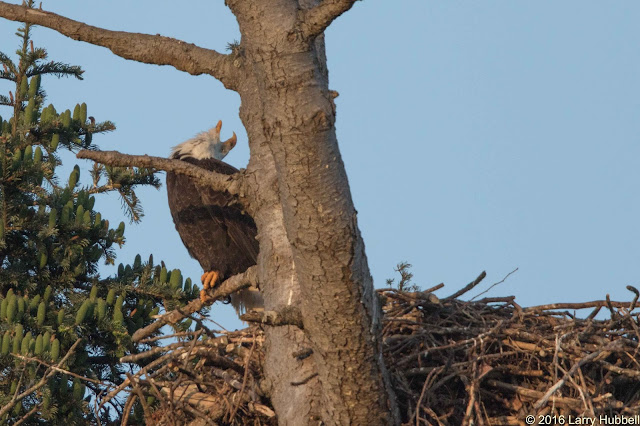 First thing in the morning, as the sunshine reaches the nest Albert, your father, welcomes the day with a long, loud melody. Having not yet learned to fly you have no choice but to listen.

During the heat of the day you have no way to reach cool water to quench your thirst. Nor can you glide down to a shady shore just to cool off. When it is cold and wet you must simply endure the wind and rain. You are no longer small enough for your mother to keep you warm. 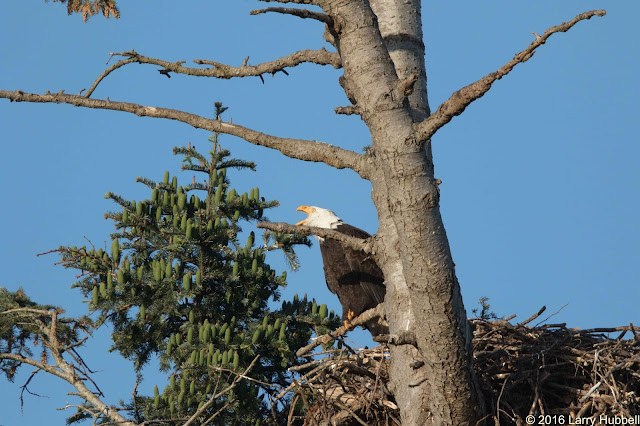 As the sun rises, your father continues his music making. Maybe he is informing all those who can hear that he (and Eva) still rule the skies on the south side of Union Bay. 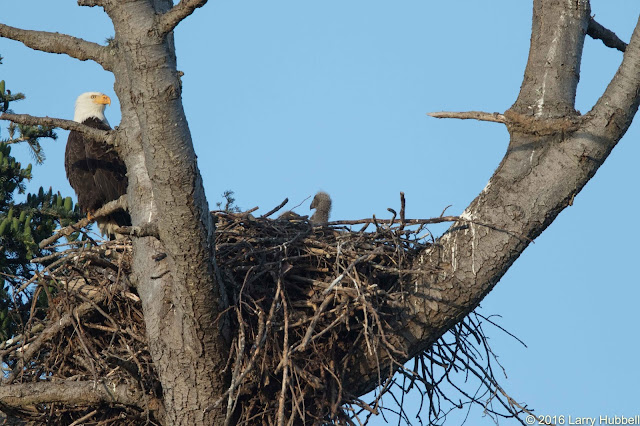 Your father's glance seems to imply, "Oh! Sorry, Did I wake you?" 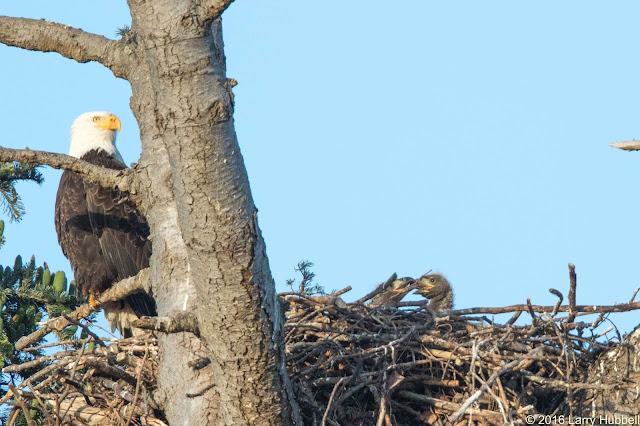 You are grumpy and sleepy. Your sibling nips at your "nose" and somehow the fairy tale feeling escapes you. 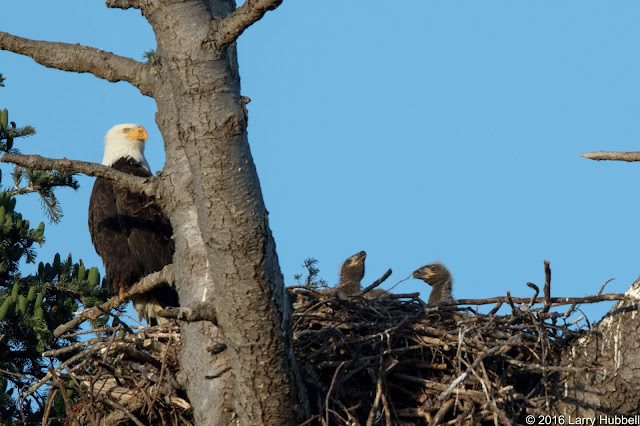 After glancing around and finding no fresh food, you and your sibling attempt to go back to sleep. 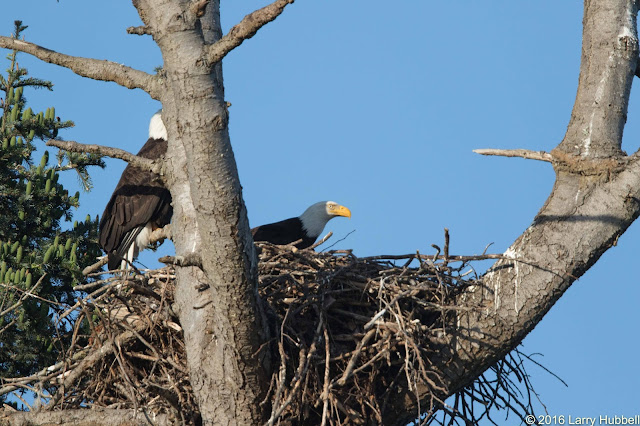 As you retire, your mother comes down from her roost and lands in the nest. 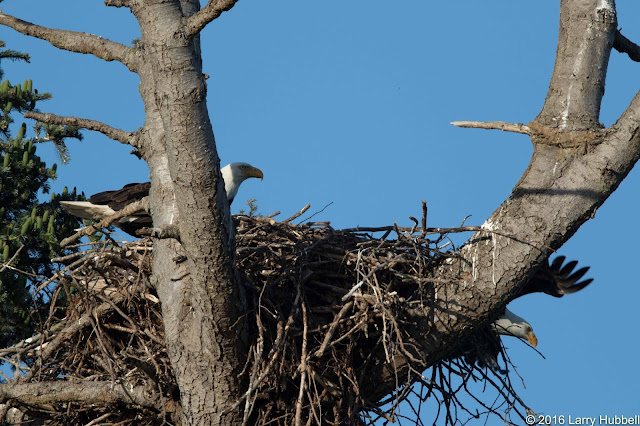 Your father takes the opportunity to give up guard duty and slips out the backdoor. 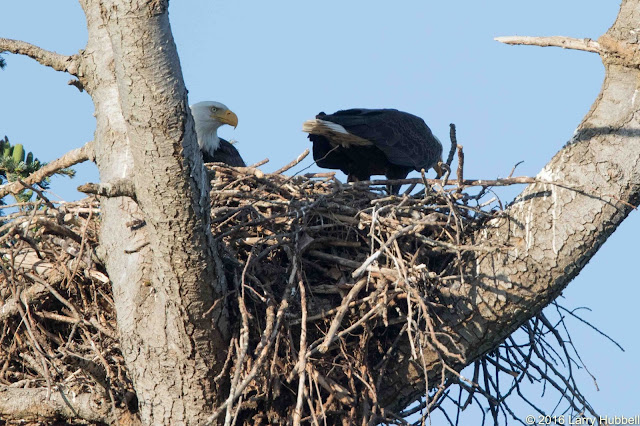 In less than five minutes, you abandon your hope of sleep when your father returns with a new branch. Apparently, he feels dawn is a great time for remodeling. 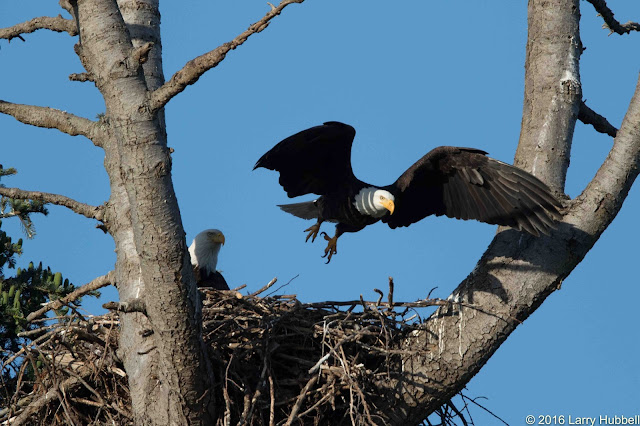 After the initial installation, he is off to find another piece of lumber.

Male bald eagles are 50% smaller than the females. It is easy to see in this photo that even though Albert is closer, he is clearly smaller than Eva. If we look closely at the king-of-the-sky analogy we find that Eva is the true ruler. Albert, her spouse, is more like a prince or royal husband.

Learning to fly is by far the largest challenge in store for young eaglets. Many do not survive their first attempt. It is all or nothing. Hopefully, during the next few weeks we will get to watch their learning process. 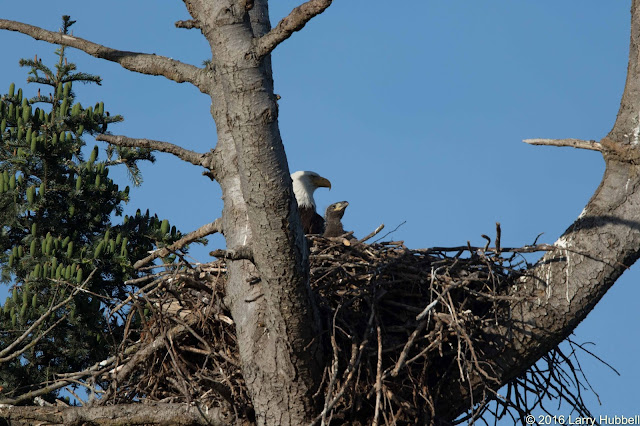 The lives of wild creatures only seem simple from a distance. Their habitat, every part of their body and every skill they must learn are critical to their survival. Fairy tales are easy to understand because they are presented in a simple fashion. The real world is complex and challenging. By paying attention to the creatures who surround us we learn how our choices impact their lives.

How old are the eaglets?

Since I was unable to see inside the nest I cannot state their age with precision. However I can offer my observations and estimates.

On March 5th Eva's behavior noticeably changed. She went from sitting around the edge of the nest or on a nearby branch to spending her time down in the middle of the nest - brooding. When viewed at a distance, only the top of her head was showing. (Occasionally, males also take turns sitting on the brood.) The change of behavior implied to me that Eva had laid her first egg. From what I have read the second egg would most likely have been laid within a day or two.

April 9th was 35 days after the first egg was laid, hypothetically. The incubation period listed on multiple sources is 34 to 36 days. However, for the first few weeks the young birds spend most of their time under the protection of their parents bodies. In addition, the depth of the nest makes seeing a small creature in the middle of the nest nearly impossible. So we have no way to see the eggs hatching or the very young eaglets in the nest.

On May 3rd I spotted a young eaglet's head showing above the edge of the nest for the first time. If my observations and estimations are correct that would make the young birds roughly 4 1/2  weeks old as of Friday, May 13th.

When will they leave the nest?

This varies depending on a number of factors. For one, since male eagles are smaller than females, it seems logical that the males mature faster. Maybe even more important the first bird to hatch is likely to get more food and therefore develop faster. There is no such thing as good manners among successful predators - the strongest eat longest - and first.

The average length of time before an eagle leaves the nest seems to be around 11 weeks, although there can be many weeks of variance. In 2012, the first time I saw a young eaglet in this nest was June 2nd. If we assume that eaglet's age as being three weeks old then we can estimate its age when it left the nest. If memory serves me right, the first eaglet left the nest around the end of July and its sibling left around the end of August. This would make them roughly 11 and 15 weeks old at the time they left the nest. Given the earlier start for this year's birds, I would tend to bet that they will leave the nest sometime in July. However, I would not be surprised to be wrong.

When will they mature?

The estimates I usually hear are four and a half to five years, at which point their heads and tails turn white and they begin looking seriously for a mate. This means these young eaglets will most likely mature in 2021.

What do they eat? 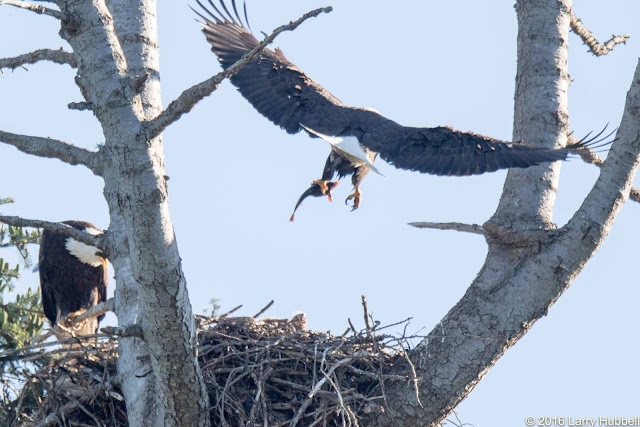 Their favorite food is fish. 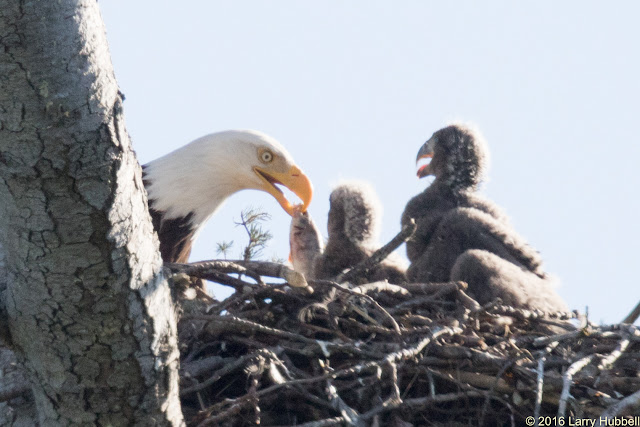 In addition to catching their own, they will also help themselves to fish caught by our Union Bay cormorants and osprey. A Madison Park neighbor reported seeing an eagle attempting to raid a crow's nest last week. I have also seen one catch a gull. Plus, I am sure small mammals would also meet their dietary requirements. 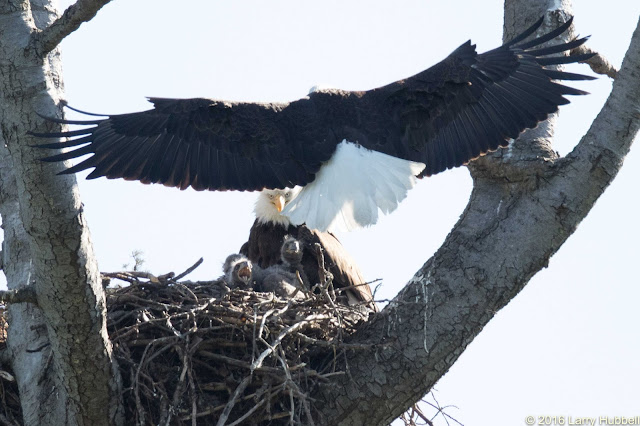 Given the predatory zeal in their eyes they seem to like all birds equally.

Spoiler Alert: If you have a soft spot for goslings you may want to skip the next photo. 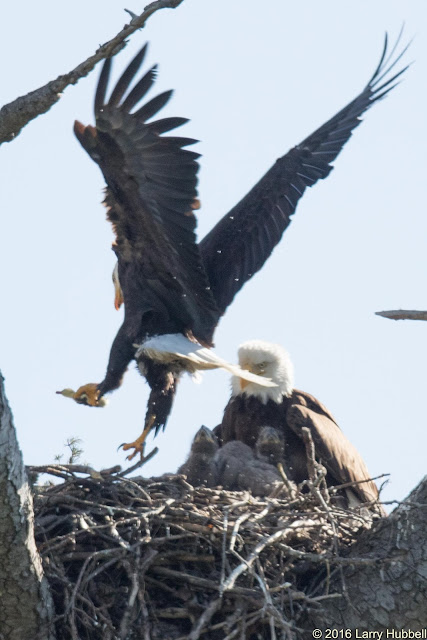 What could I do to help the eagles?

Finding ways to reduce water pollution - like driving less and installing rain gardens - will help salmon and other fish survive. Since fish are a primary food source they are critical to the eagles, as well as orcas, osprey and many other wild creatures. Lately, I have also been hearing how the nutrients from salmon even help the plants and trees of our forests. 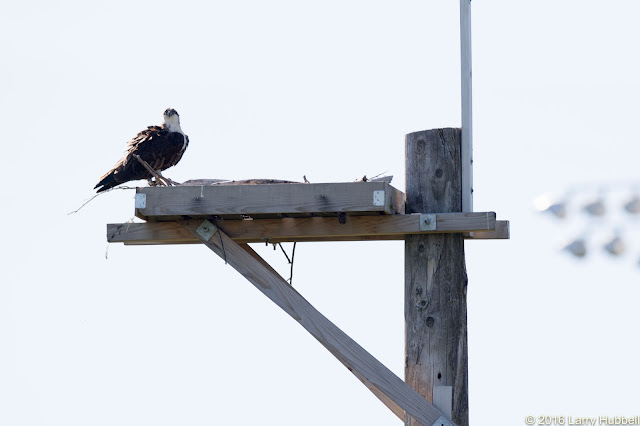 Last Sunday morning, Jim Kaiser, from Osprey Solutions, reported seeing one of the osprey on the nesting platform, which was erected last year. I checked on Tuesday and Thursday afternoons and both times one of the birds was on the pole or the platform. Finally, it looks like the osprey may be taking ownership. Sadly, I have not seen any sign of sticks being gathered or of a nest being built. However, this may be a step in the process. Hopefully, next year they will start out nesting on the platform instead of a light pole. 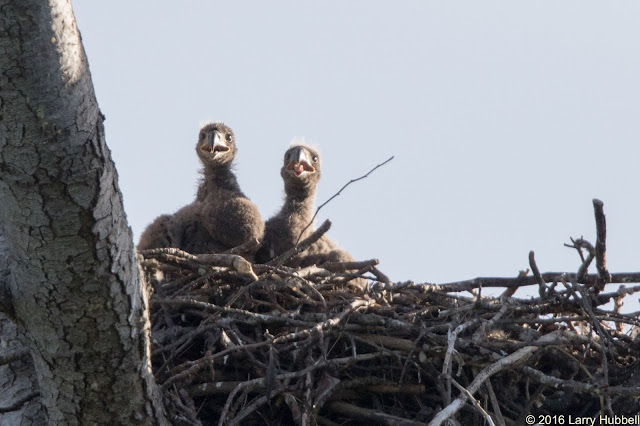 Have a great day on Union Bay...where eaglets are learning to rule!