The Heart of a Warrior 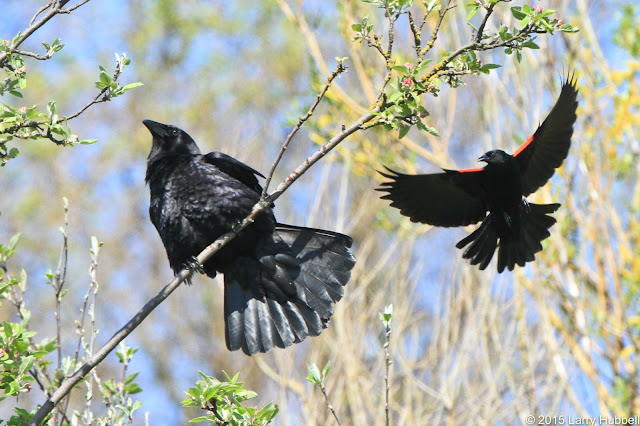 Around Union Bay, crows can often be heard harassing larger predatory birds like eagles, hawks, osprey and owls. As a matter of fact, following the sound of the crows is a big help to my photographic endeavors. It is kind of like having a flock of black-feathered assistants.

This photo shows a refreshing turn of events. During April a few years back, this crow appeared to be searching the cattails for defenseless little hatchlings. The faster, smaller and surprisingly more aggressive red-winged blackbird decided to put a stop to the black-feathered assassin.

Male red-winged blackbirds can be fiercely territorial. During the confrontation you can see that both birds puffed up their feathers and spread their tails to appear as large and as intimidating as possible. It must have felt a bit odd to the crow to be on the receiving end of this treatment. I wonder if crows are smart enough too appreciate irony. Ultimately, the crow decided the potential reward was not worth the noise and harassment.

Speaking of harassment, I have noticed that crows seldom harass pileated woodpeckers. More than once I have watched a crow flying in a straight line just above the trees, when suddenly the it spots a pileated dead ahead, perched on a treetop. Pileated woodpeckers often work their way up dead trees while searching for carpenter ants. When they reach the top, a pileated will usually pause and check out their surroundings before selecting their next feeding site. Each time I have seen a crow notice a pileated in its path, the crow has performed the following evasive maneuver - the crow immediately changes course, cutting a semi-circular path around the woodpecker. The crow keeps a constant and consistent distance between itself and the smaller bird. The pileated may not be as large, but it is quite possibly more agile and certainly equipped with a more threatening and potentially penetrating proboscis. 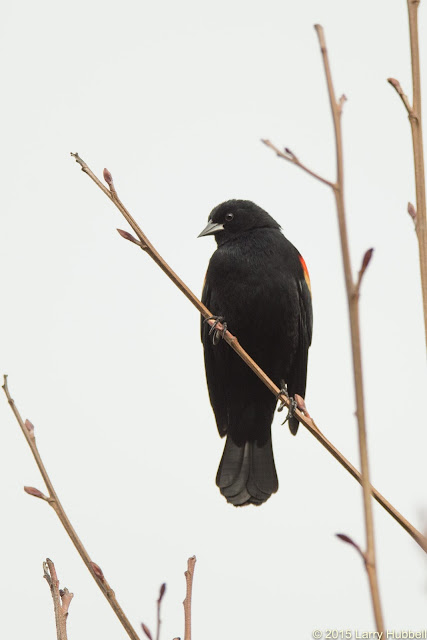 Last week, I noticed a solitary red-winged blackbird on the south side of Portage Bay. Perched above the surrounding vegetation, the blackbird was momentarily calm and observant. By the way, did you notice the perfectly, conical symmetry of the blackbird's beak? Off the top of my head, I cannot think of another local bird that is endowed with a similar beak. 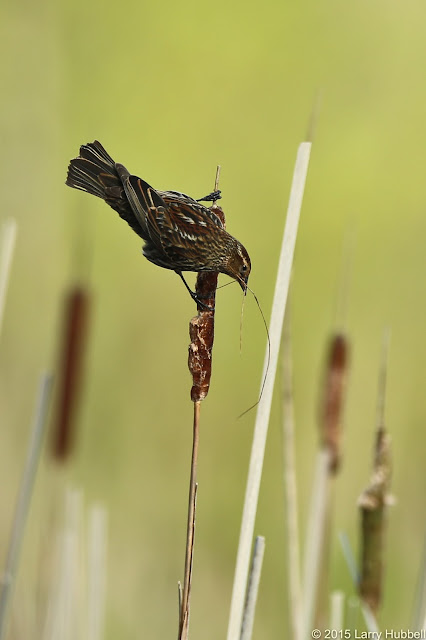 The female's beak can be very helpful to a new birder. Particularly, when the female blackbird is away from the cattails - for instance visiting your bird feeder. She has none of the distinctive, namesake coloring of the male, so that sharp little beak can be a very useful aid when attempting to identify the basically brown female blackbird. 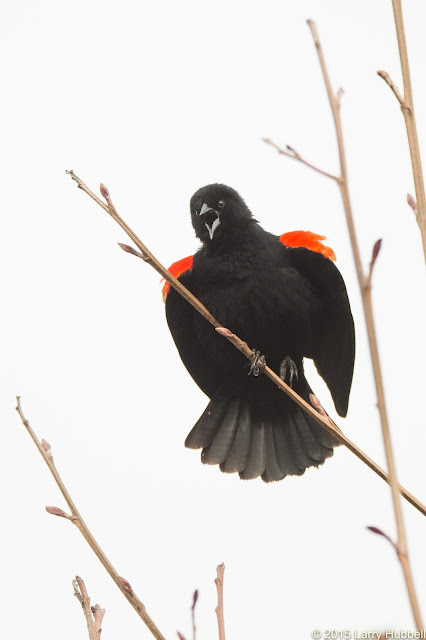 Back on Portage Bay, without any noticeable provocation the male blackbird would raise its voice to lay claim to the surrounding segment of shoreline. Along with the vocalization it would also lift its shoulders, spread its tail-feathers and inflate its colorful coverts. The posture and the attitude seem similar to a body-builder or prize-fighter. 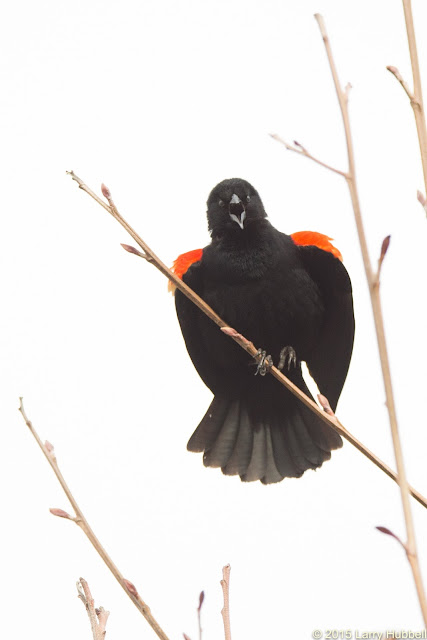 While listening to the bird and viewing its colorful epaulets, another impression crossed my mind. The strident little bird looked a bit like a small black-coated military leader exhorting imaginary troops. 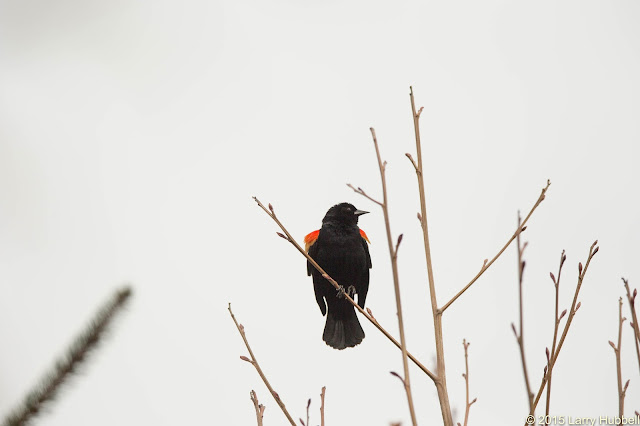 There was certainly no doubt about the meaning of the bird's territorial proclamation or its warrior's heart.

Many years ago while living in Kent, I learned to associate the red-winged blackbird's song with the mnemonic, "Ko-kang-ga-Ree." On All About Birds they suggest the mnemonic, "conk-la-ree." If you search the internet I am sure you will find any number of different mnemonics that must have sounded to someone, somewhere, somewhat similar to the song of a red-winged blackbird.

Last spring while sitting among the cattails on Union Bay, a new mnemonic popped into my head. Suddenly I was hearing, "Muh-kill-TEE-oh" each time the blackbird sang.

From research on the Birds of North America site (please see the citation below) I learned that red-winged blackbirds can be found:
I also learned that there are dozens of different red-winged blackbird subspecies. Plus, it turns out that when eggs are transplanted to a distant nest, belonging to a different subspecies, the resulting young birds take on some of the attributes of the local subspecies. In other words, it may be that the variance in subspecies may have more to do with their environment than with their genetics.

I suspect that the red-winged blackbird's territorial songs may vary a bit depending on their local dialect. If so, then possibly the variety of mnemonics associated with the birds may be inspired by real differences in their songs - not just creative listening. Could it be that our local birds really are saying, "Mukilteo!"

I understand that my hypothesis is unproven and may be unprovable. None-the-less, it does make me wonder what mnemonic runs through your head when you hear the song of a red-winged blackbird. I also wonder where in North America you were when you learned to associate your mnemonic with the red-winged blackbird. If you are interested in comparing regional differences, please send in your personal mnemonic and its originating location, and I will attempt to compile and present the results.

In any case, leaves are budding, Eva our 520 eagle is sitting on eggs and the red-winged blackbirds are laying claim to as much territory as they can control. Spring is upon us at last.