Last week I visited the Nisqually Wildlife Refuge. Seeing this male hooded merganser - floating in the sky - was like a lucky, consolation prize. It is odd, but experiencing nature can be disappointing, surprising and encouraging, all at the same time. 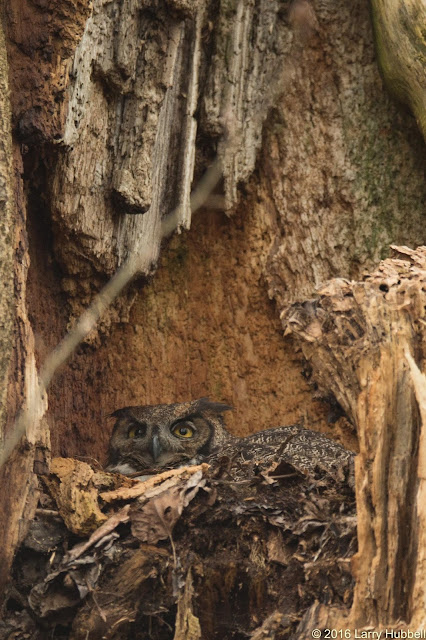 I was hoping to see great-horned owlets in the nest. No such luck. However, it appears that my luck was better than that of the female great horned owl. She has been sitting since the first of the year, and at this point it seems unlikely that her eggs will hatch. 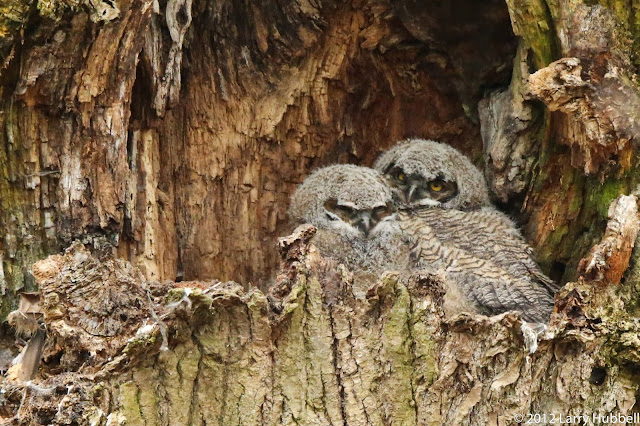 It is possible that these great horned owlets from three years ago were hatched by the same female. There are even better photos of them in the 2013 post, The First Signs of Spring.

Note: Great horned owls have yellow irises unlike barred owls. Barred owls are the most commonly seen owls around Union Bay. To see some of our local barred-owl owlets, Click Here. 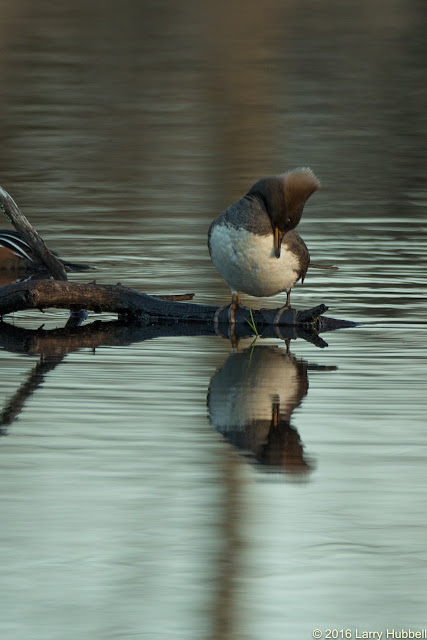 Luck is a funny concept. We have some oddly different types of luck. Some examples include having no luck, good luck, bad luck, sheer luck, dumb luck, tough luck and pure luck. It makes me wonder things like: Are pure luck and dumb luck different? Is bad luck the same as no luck or tough luck? Why does pure luck seem slightly superior to sheer luck? 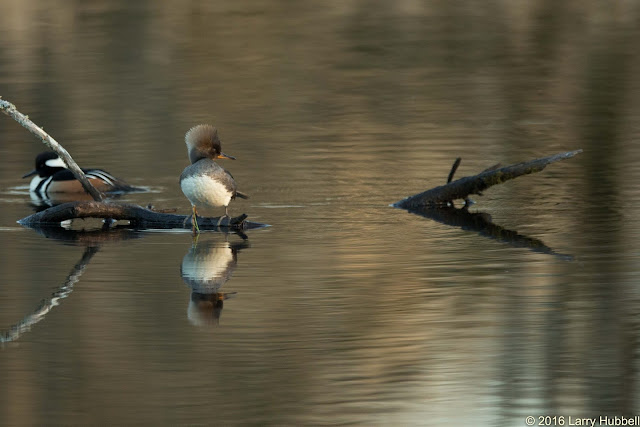 From almost everyone's point of view having a mate is good luck. 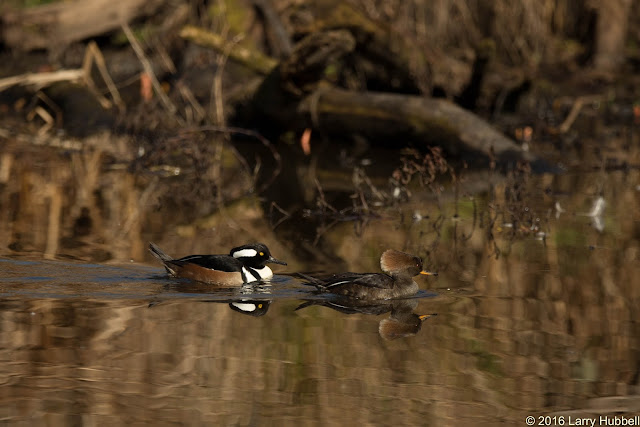 The differences between the male and female hoodies are amazing. Functionally, they seemed to be shaped almost exactly the same and yet their coloring is so different it is hard to see how similar they are. The female's lack of bold coloring most likely increases the odds of survival for her and her progeny. On the other hand, the male's brilliant coloring must help him to attract a mate. 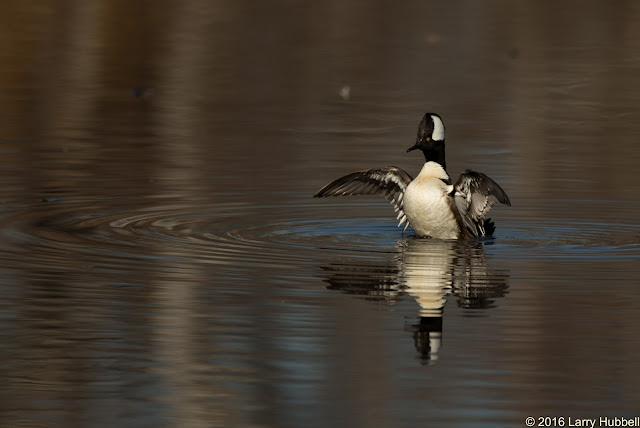 Having attracted a mate, the hooded merganser seems justifiably happy and proud of his good luck. 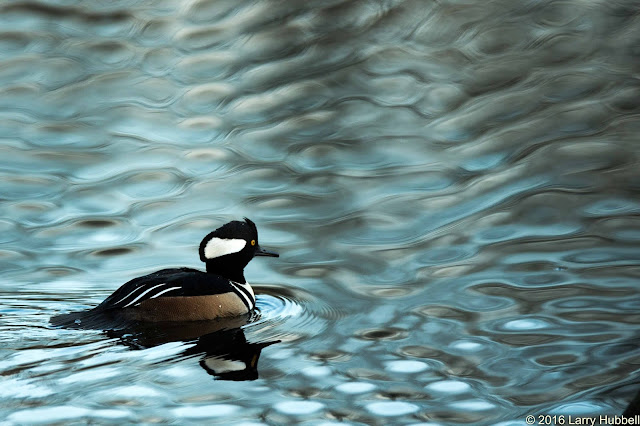 Weather changes are often correlated with how lucky we feel. It all seems to depend on our expectations. If the forecast is for rain and we get an hour of sunshine - we feel lucky. However if we schedule an outdoor wedding in August and we get a downpour during the ceremony - we feel unlucky. It seems that luck, both good and bad, is based at least in part on unexpected events e.g. surprises. 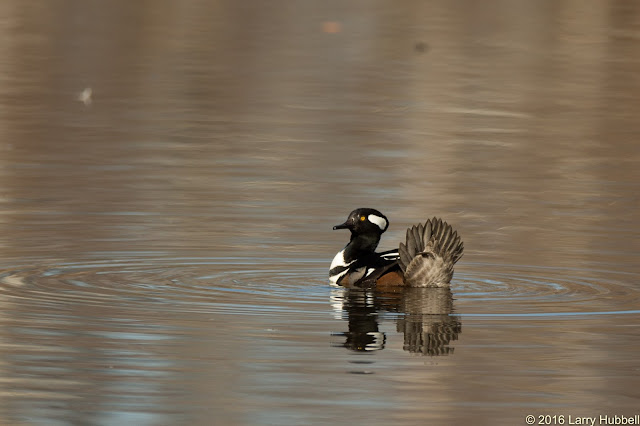 Hooded mergansers are full of surprises. For example, I have no idea why this male bird is holding his tail up in the air. He makes me think of a police officer directing traffic. 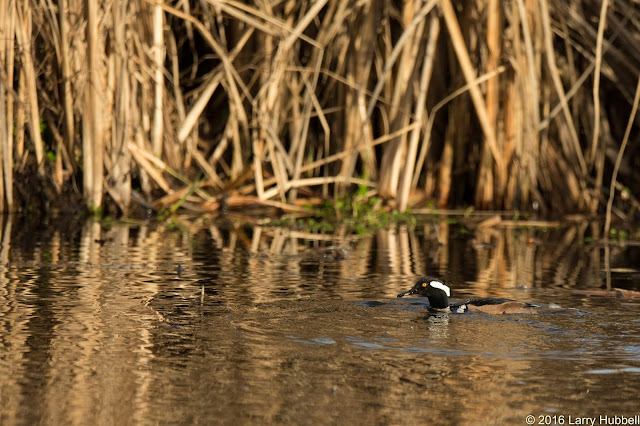 A few days later, on Union Bay, I was lucky to find a hood merganser bathing in the golden reflection from last year's cattails. 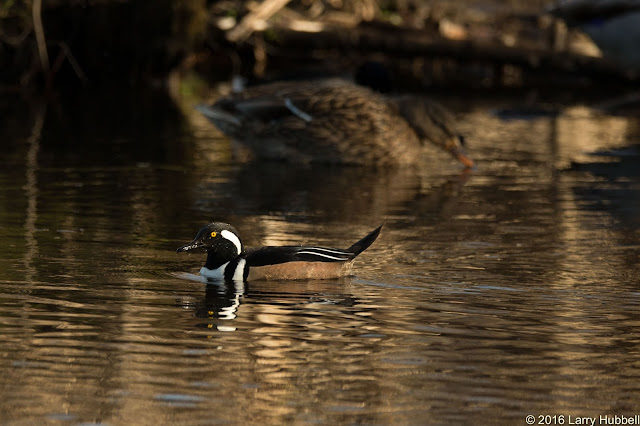 I am always surprised by how easily hooded mergansers can change the shape of their crest. Whenever a male is preparing to dive the feathers always lay down and the white shape on the back of the head becomes narrow and curved. After a quick dip he shook off some of the water which caused his crest to swing more freely than I would have expected. 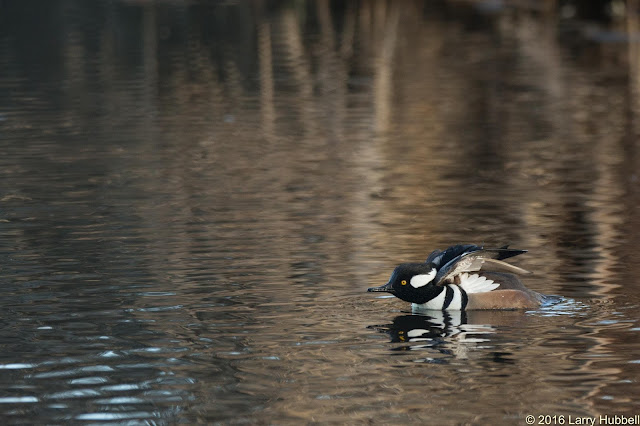 When he began preening, it allowed me to glimpse additional white feathers, which are usually hidden under his wings. 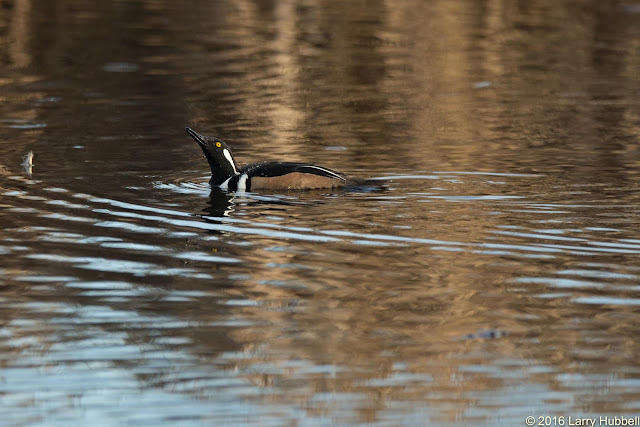 When he held his head up to swallow a drink of water, I was surprised to see how similar his behavior looked to that of a thirsty trumpeter swan. 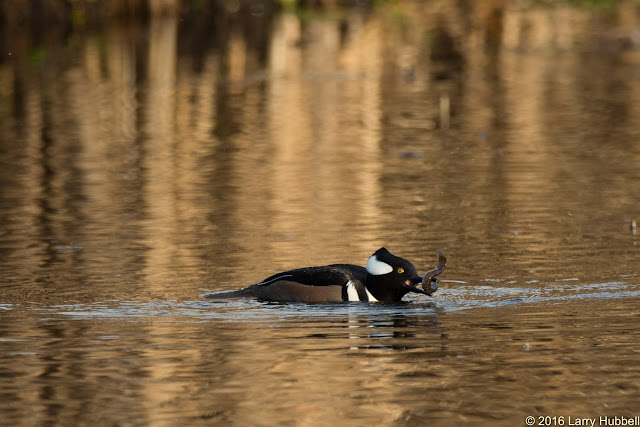 Moments later the merganser dived and resurfaced with a fish. I must admit that for years I have wondered what type of fish is virtually the same size from head to tail. This week I had the opportunity to ask Dennis Paulson, PNW naturalist, about this fish which is common in Union Bay. Dennis explained that this odd little fish is an invasive oriental weatherfish. Apparently the weatherfish out competes local native fish, muddies up the water and can even survive out of the water. Worst of all, the fish can crawl across dry land from one body of water to next. 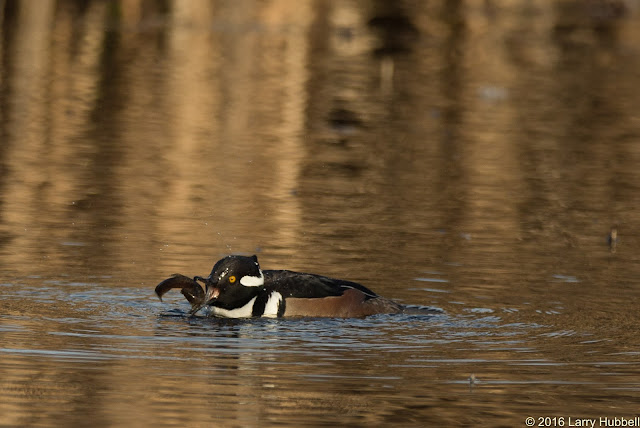 This weatherfish put up quite a battle. The hoodie struggled and juggled to clasp and control the wriggling fish, while the weatherfish did everything possible to avoid its impending demise. 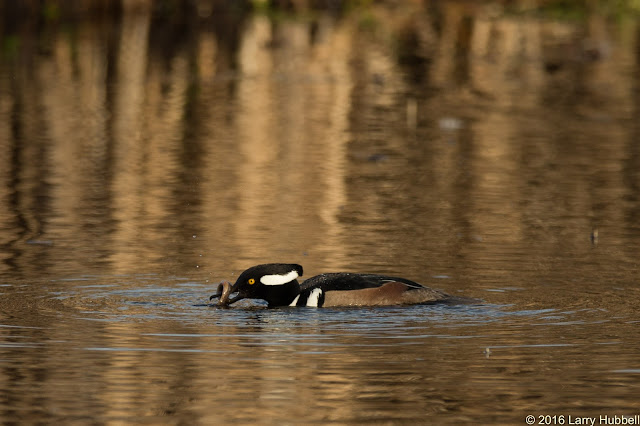 Needless to say, I was pleased with the merganser's good luck... 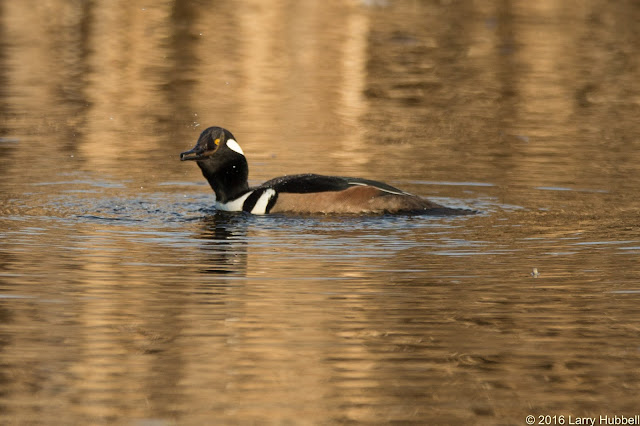 ...and, given my preference for native life, I was not unhappy to see one less weatherfish in Union Bay.

From my perspective observing each of these small moments in the life of a hooded merganser is a small unexpected surprise. A surprise that brings a smile to my face and makes me realize how lucky I am to live in a city with wild creatures. Living in a city devoid of native wildlife would be worse than bad luck. I would find it hopeless. The greater the diversity of native life that surrounds us, the more surprises we will encounter and the luckier we will be. I might have second thoughts about allowing bears and cougars into our city, but on the whole I feel that:

are all positive steps which will lead to a future filled with lucky encounters and hope.

I think the new light rail station at Husky Stadium is a prime example of a step in the right direction.

By the way, if you have not yet read the surprising story of a cougar living in Los Angeles. Click Here