A Hawk In The City 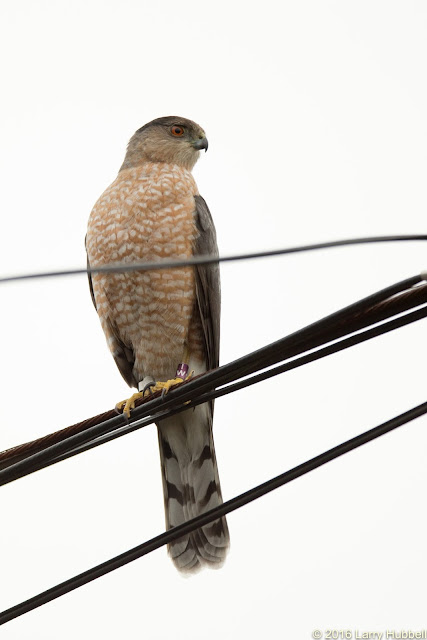 On Saturday this fierce little Cooper's Hawk was sitting on a wire just above a residential street in Madison Park. The males of the species are smaller than the females and yet they are the primary nest builders and provide most of the food for the young during the first few months. They are active, curious and aggressive hunters and yet a male may weigh as little as 9 ounces.

When you look closely at this bird what do you notice? The rusty-orange bars on the chest indicate it is a mature bird as do the fiery-red-orange eyes. Did you notice the long tail or the purple band on its leg. 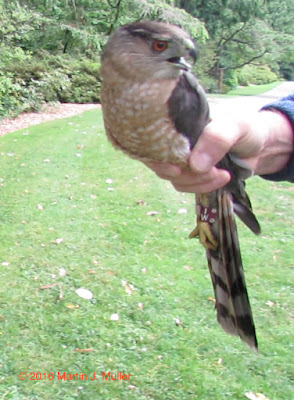 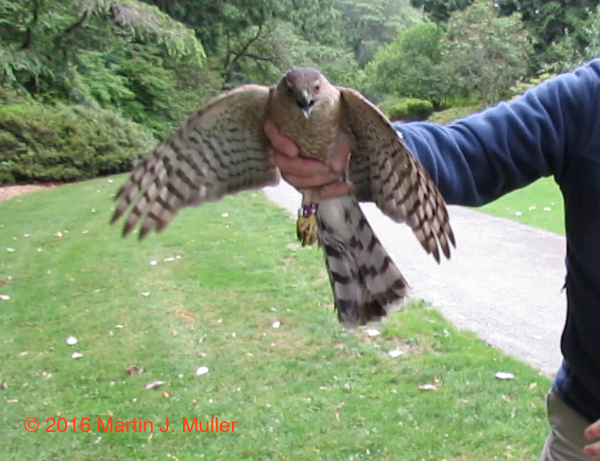 The purpose of the study is to learn more about the behavior of Cooper's Hawks in the city. In the past, the birds have generally avoided human contact. It appears their fear of humans and cities may be receding some. Only through carefully observation and scientific studies like this can we learn whether the hawks are having success in the city. These types of studies can also help us to understand whether we are building cities that are in harmony with nature.

Thank You! - to Martin and Ed for kindly sharing their knowledge and also to Martin for sharing the previous two photos. 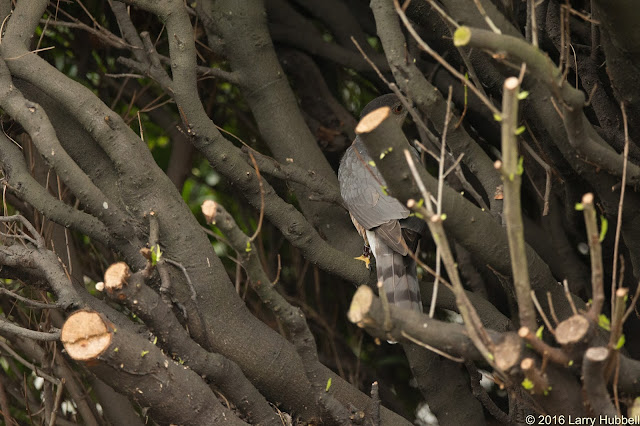 On Saturday, the hawk did an easy glide down from the wire and landed at the end of this hedge between two homes. No doubt the little hawk noticed potential prey slip in between the pruned branches. Cooper's Hawks are very agile birds with long tails that help them fly with precision between branches, bushes and thickets. However these limbs are so thick there was no way for the hawk to spread its wings - which could be 24 inches or more in width.

Without hesitation the small hawk disappeared into the hedge, fearlessly climbing from limb to limb. Inside this tight, constricted environment the little hawk is on the apex of the food chain or maybe we should say pryamid.

Two crows came and sat on the overlooking peaks of each of the neighboring houses. In their usual raucous manner the crows alerted the world to the hidden danger in the hedge. Crows do not care for Cooper's Hawks. The little hawks are fast enough to catch a crow and fierce enough to dispatch them.

Crows have adapted well to human cities. City crows have reproduced and multiplied far beyond their normal density. In areas outside the city, crows must work much harder to find food. Much of the crow's success in the city is due their intelligence and the food we leave for them, however the lack of capable predators may also be a factor. While I respect the intelligence of the crows, it seems appropriate to me that able-bodied predators, like Cooper's Hawks, may be making a come back in the our cities. We may be watching evolution in action.

After a few moments, the hawk came flying out of the hedge and headed east with the crows trailing behind and warning the world. Crows, robins, flickers, rats, squirrels, wigeons and other ducks, all have good reason to fear the hungry little hawk. 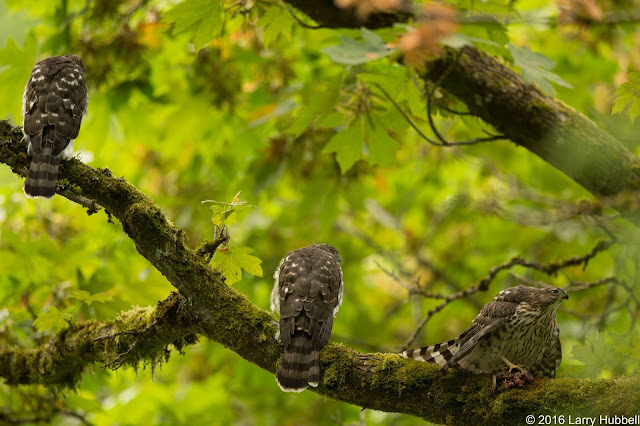 Due to Martin, Ed and others' observations, we believe our little male bird fathered and fed these three young hawks in the Arboretum last summer. The small male would make regular food deliveries at what seemed like light speed. The young birds were already becoming fierce and dangerous and the little adult evidently found it safer to just drop and go. 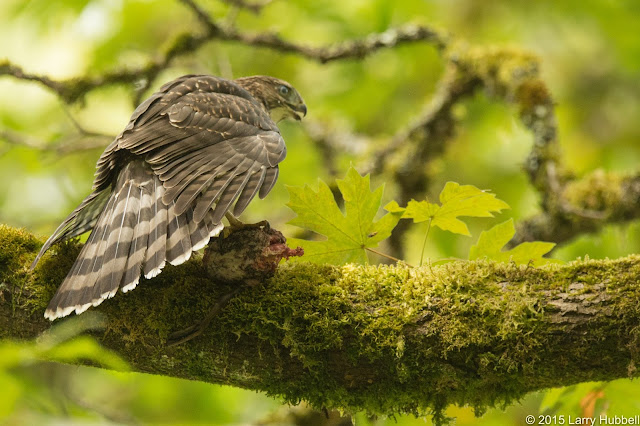 This close up shows the juvenile bird which was on the right in the previous photo. The young bird is trying to eat its lunch and also hide the food from its siblings. This spreading of the wings and tail is called mantling. 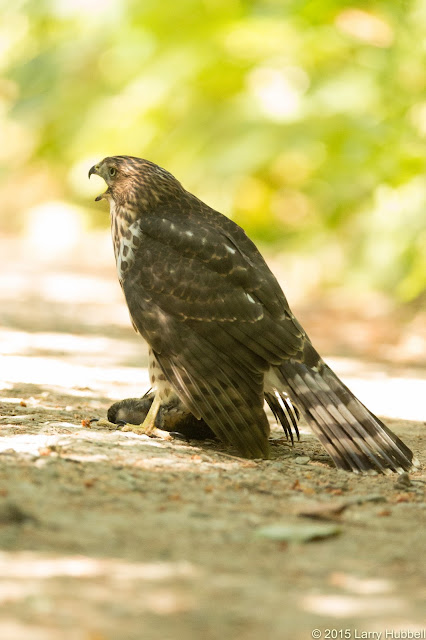 On the day before - in July of 2015 - I watched one of the juveniles crawl out of the bushes with what looked like a dark-eyed junco. The young bird certainly appeared to have been hunting "by foot", similar to its father in the hedge on Saturday. 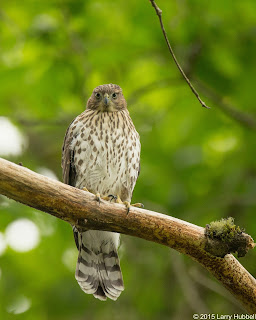 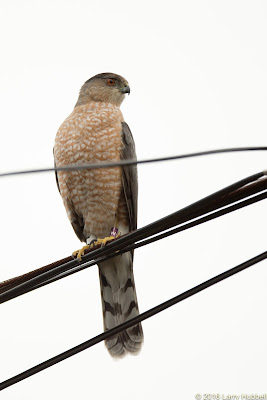 How do these two birds differ? The most obvious difference is the vertical stripes on the breast of the juvenile. You may also notice that its irises are very light and not the least bit red. Finally, if you compare the back of the young bird on the ground with the back of the mature bird as it entered the hedge, you will see definite differences in color.

Martin mentioned the color of the father's upper wing coverts in 2015, which told him that the bird was beyond the age of two years. If Martin had found any reddish-brown colored covert feathers, along with the barring on the chest, he would have concluded the bird was then in its second year. At this point, we can deduce that the father would currently be at least three years or older.

Because of Martin and Ed's study, and the help of their associates - who report sightings all over the city - we know that before they settle down to building nests, male Cooper's Hawks may travel a bit. This Spring the father (1/W) was spotted in Madison Park and was also seen in a yard approximately 2 miles away. Two weeks ago, a different male (0/Z) was spotted fairly close to our hero's 2015 territory in the Arboretum. So there is apparently a lot of traveling going on. (You may read more about 0/Z and another crow encounter by Clicking Here.)

Sadly, our story does not end with a focus on the the beauty or mobility of these creatures. On Sunday, two faithful readers spotted our little male bird in an alley in Montlake. He was laying below a holly hedge. My best guess is he was chasing a small bird, into or out of the hedge, when a car took him by surprise. In the last few years I am aware of a young barred owl, a young pileated woodpecker and now a mature Cooper's Hawk all apparently hit by cars in just the Montlake area.

I realize that automobiles are critical to our lifestyle and they are not going away, but it seems like we should begin to consider how we might live and move in greater harmony with nature.

In my dream of the future, I imagine cities where people are active enough and healthy enough to travel primarily on foot or by bicycle. When faster transportation is needed inside a city, the first choice would be automated, underground systems. Our new light rail station which is soon to open near Husky Stadium is an excellent example. If you have other thoughts regarding transportation and living in harmony with nature, I would love to hear them. If we work together, the possibilities are endless. 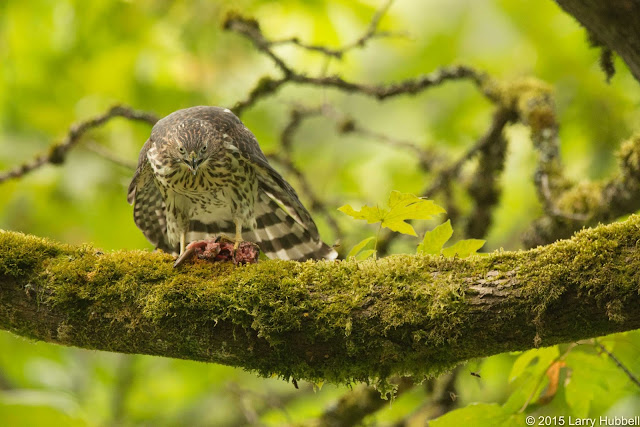 To honor the memory of our fallen bird I thought it appropriate to include this photo of one of his offspring. Martin's earlier photo showed the father with the same attitude. It was especially evident due to the burning-red fire in his eyes. While the father's fire has gone out, it is reassuring to know his intensity lives on in his offspring - who by now should have the same fiery-red eyes.

Have a great day on Union Bay...where hawks live in the city!

Note: The National Highway Traffic Safety Administration website shows that during the 20 years ending in 2013 more than thirty thousand people died - each year - in vehicle accidents in the United States. While the numbers are declining, in total that is more 750,000 deaths. Even if we ignore the deaths of wild creatures hit by automobiles, and theimpact of global warming, it is still in our best interest to find safer ways to travel.