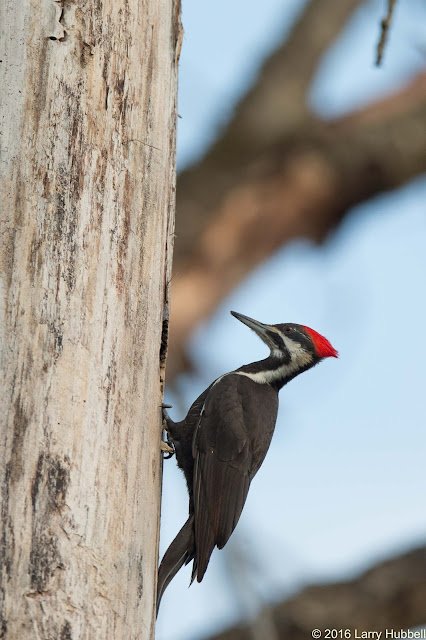 In late January I watched as Storm returned to her roost at the end of the day. Storm is the name I gave this female pileated woodpecker after a windstorm in November had apparently left her homeless. Storm excavated a flicker nest in this snag and made it into her winter refuge or roost. A week later a male pileated inspected Storm's new digs. Then in early January we saw the two of them create a river of wood while looking for ants inside a tree near Arboretum Creek. 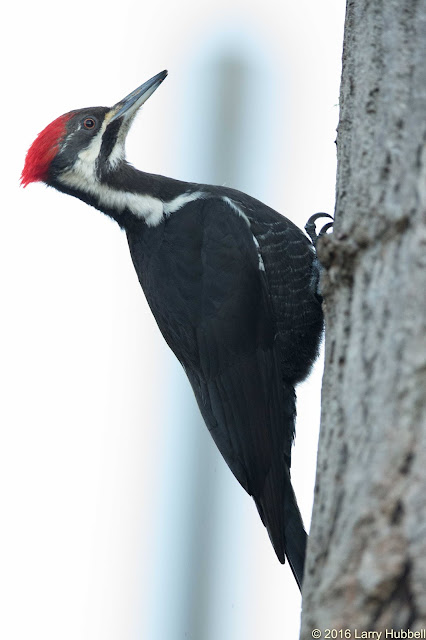 Later in the month, after returning to her roost at the end of the day, Storm changed her mind. She flew down from her tree and began searching for food immediately in front of me. The sun was beginning to set, so the light was less than optimal. However her willingness to come so close made me forget all about the photographic details. Besides I was afraid to move - fearing I might scare her away. 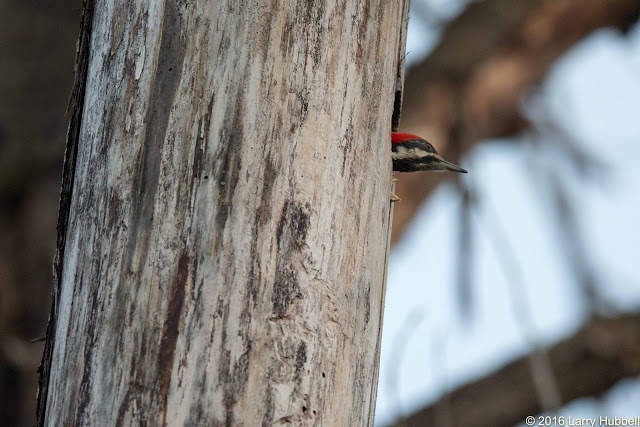 After a few minutes, Storm finished her feeding and returned to her roost for the night. 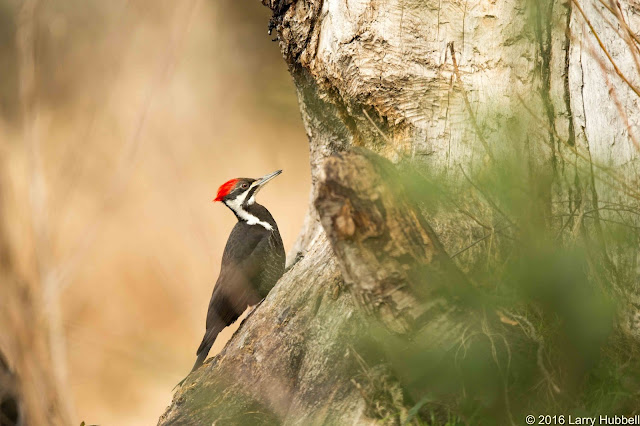 On February 1st, as I was pushing my kayak into Portage Bay, I noticed two pileated woodpeckers working near the Montlake Community Center. I got a fairly nice photo of the female bird. I wondered if it was Storm, but given the size of the bird and the distance from her roost I was not positive. 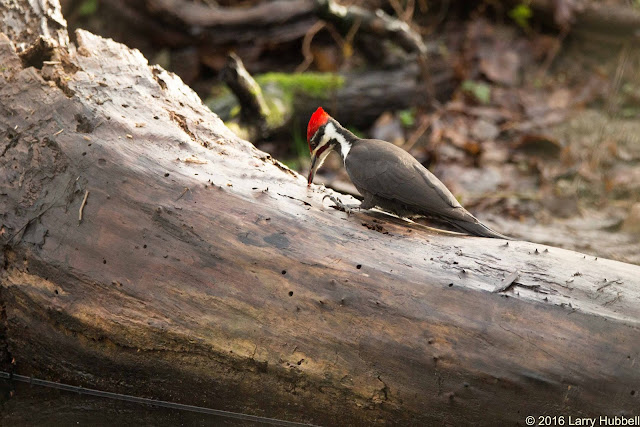 Later in February, I spotted this male pileated working near Foster Island - fairly close to Storm's roost. If you look closely you can see the red of his tongue as he explores for food. 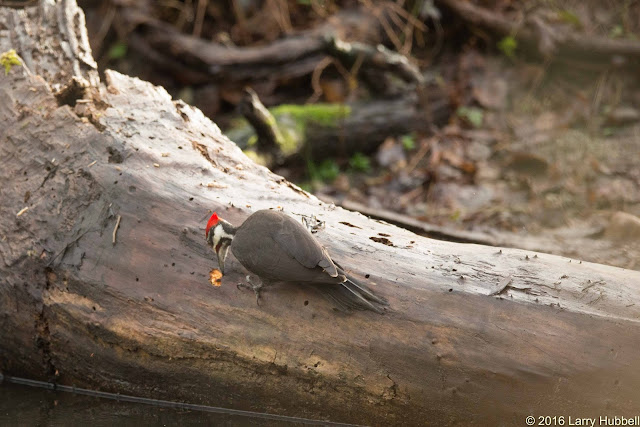 Perhaps a scent or the sound of movement in log caused him to start a new excavation. 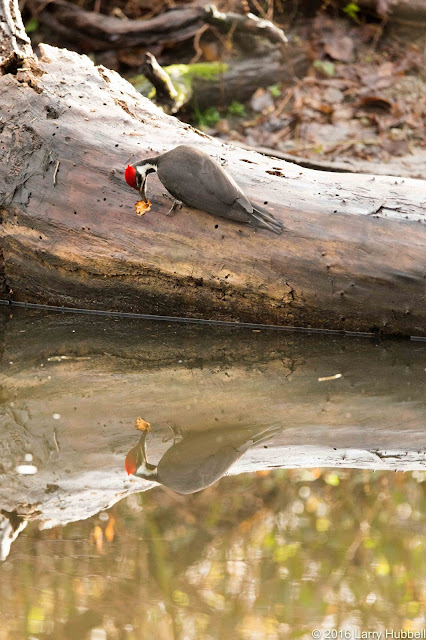 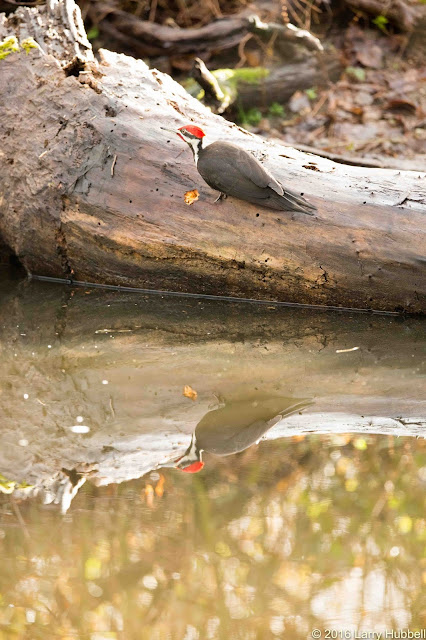 He split his attention between feeding and watching for danger. 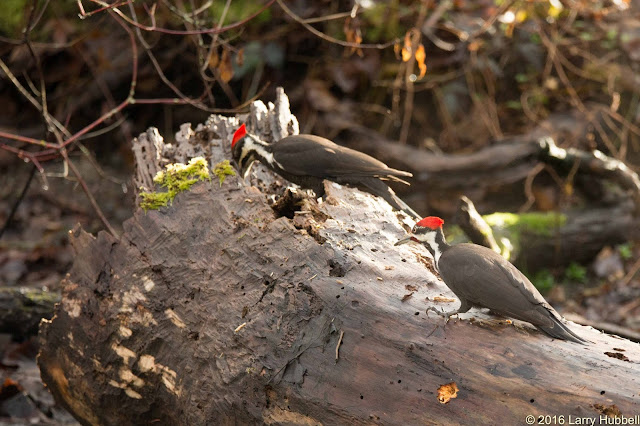 A moment later he is joined by a female. 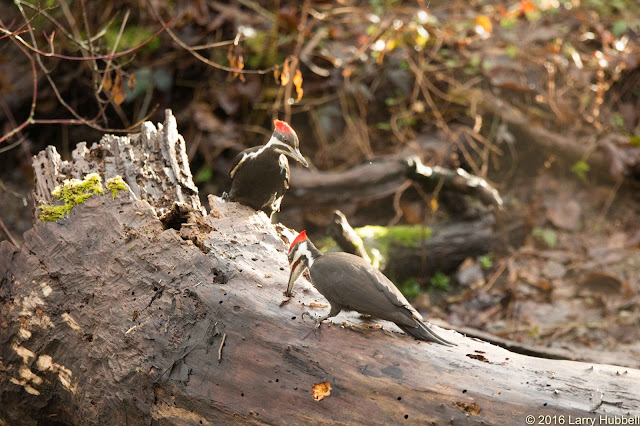 In this case, given the proximity to Storm's roost, I felt certain that this was Storm and Chip. Chip being the male she was with during the River of Wood post. 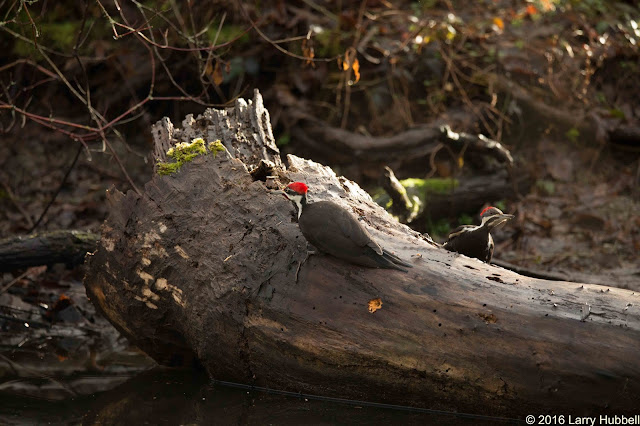 After a few moments, Storm ventured off - possibly in search of a more upright tree. 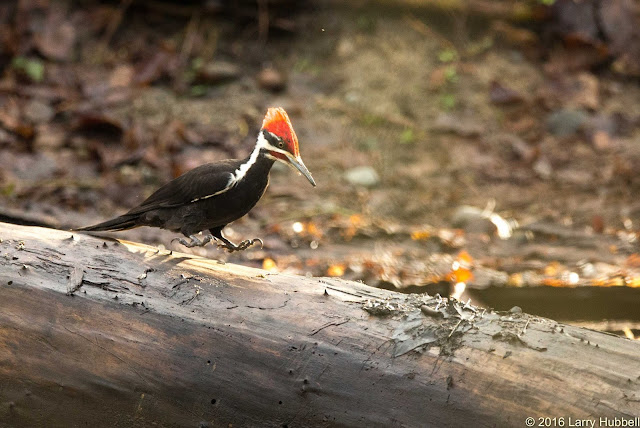 Chip hopped down the log as he followed after her. It seems to me that pileated woodpeckers are much more likely to hop, than to walk or waddle like a crow or a duck. 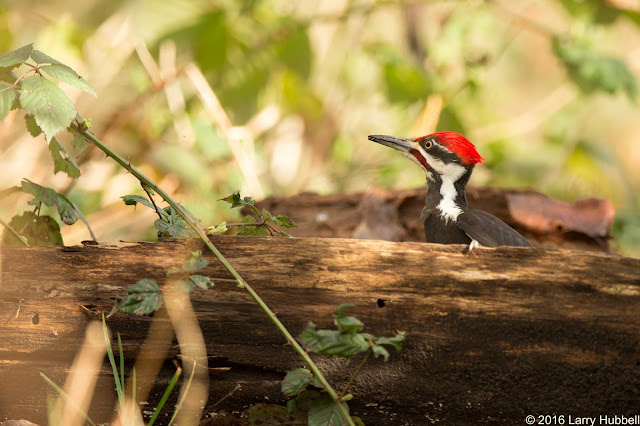 Chip's next feeding attempt was also on a log. In this case the light was very nice, but I could only see him when he lifted his head to check that all was well. 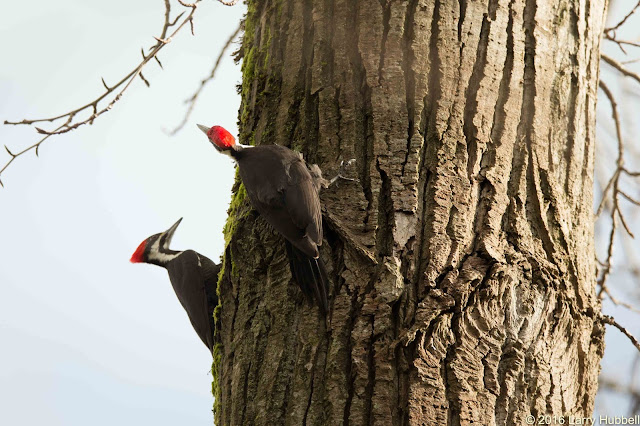 After a few minutes, Storm landed on a cottonwood just above Chip. He joined her and the two birds spent a moment together before... 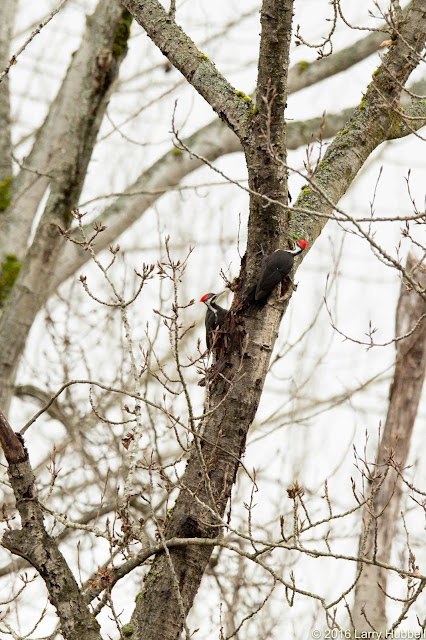 ...moving to a more distant tree. I was left with the clear impression that the two birds had become a mated pair. I was hoping to watch Chip prepare a nest site and follow their parenting progress through out the Spring and Summer. 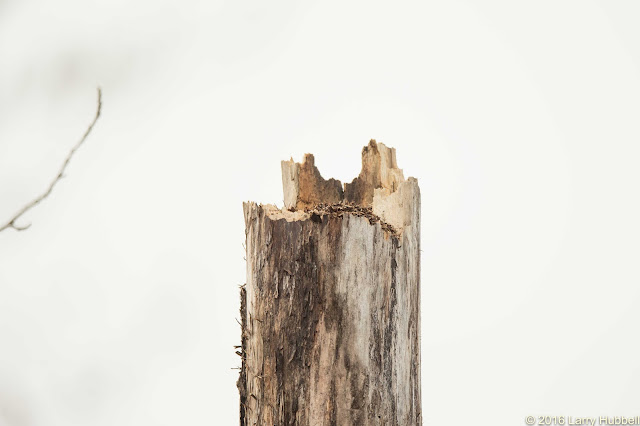 However, nature was not finished with Storm. On the last day of February, another windstorm blew through our area. The next morning as I passed Storm's roost, I was shocked to find it gone. The snag broke at the precise location of Storm's roost. Apparently, her enlargement of the flicker's nest significantly weakened the snag. The top half fell into the channel south of Foster Island. The cup-shaped outline, which you can see in the photo above, is the bottom half of Storm's access hole to her roost.

It is possible that Storm has excavated a new roosting spot or possibly the two birds have moved on to another location together or maybe Chip has built a nest locally and Storm is already on eggs. In any case, if you happen across a pileated woodpecker in the Arboretum, especially in the area of Foster island, I would love to hear from you. (ldhubbell@comcast.net).

Friday morning as I walked towards the Arboretum Creek, with my camera in hand, an unknown  gentleman turned to me while holding his hands about a foot and half apart. He said, "What do you call the black and white woodpeckers with the red heads?" "Pileated Woodpeckers" I immediately replied. I asked if he had seen any. He pointed in the direction I was headed and said he saw two of them in the trees. I handed him my card and ran. 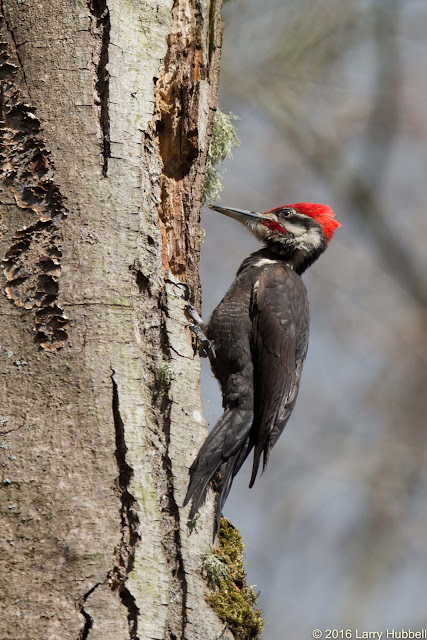 I found Chip feeding near the top of a decomposing alder. I watched him work for quite awhile. I felt fairly secure this was Chip because I watched him and Storm work this location many times during the winter. I saw no sign of Storm, but finally I heard her call once. 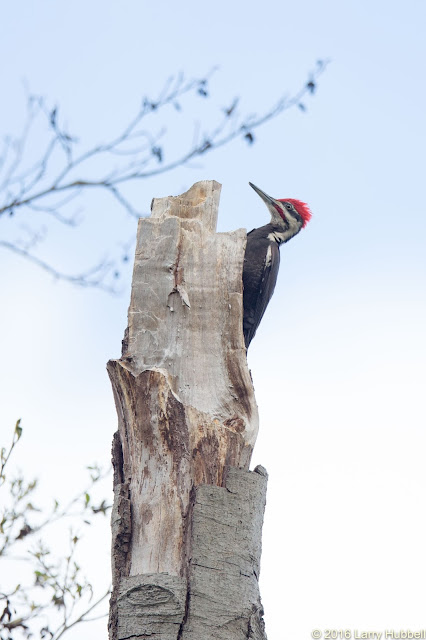 Chip responded by flying in her direction and landing on a different alder snag, before returning to his feeding. Unable to spot her, I was beginning to think I would have to be satisfied with just hearing her voice. 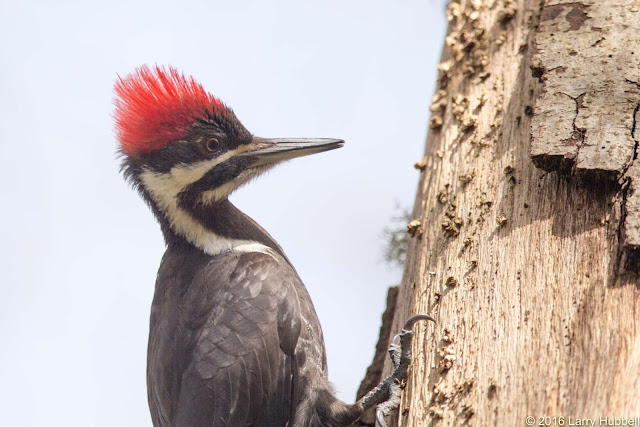 Then a few moments later the red-eyed Storm flew in and landed nearby with her crest erect. It would be interesting to know the source of her excitement. 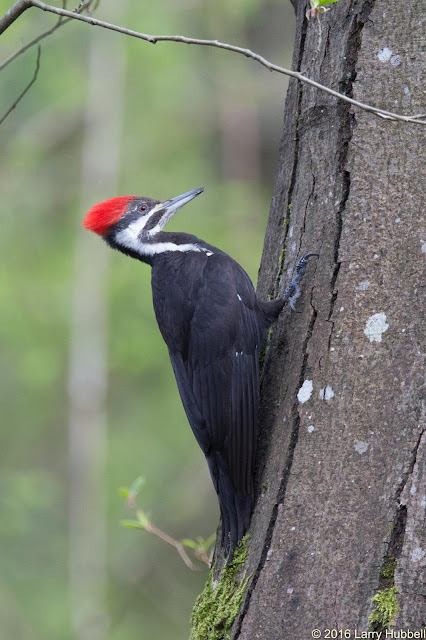 She flew from tree to tree and... 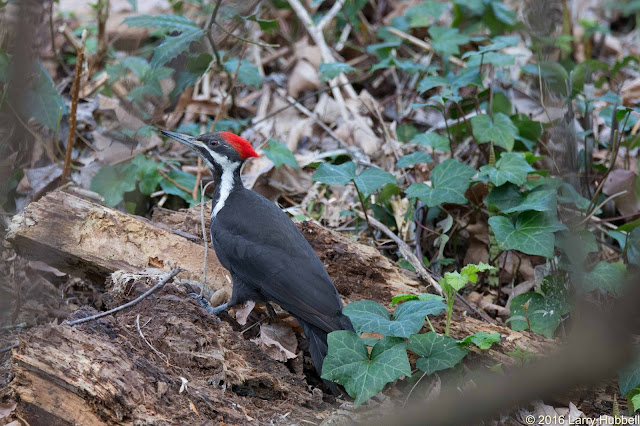 ...even searched a log for a bit before heading west towards Montlake. 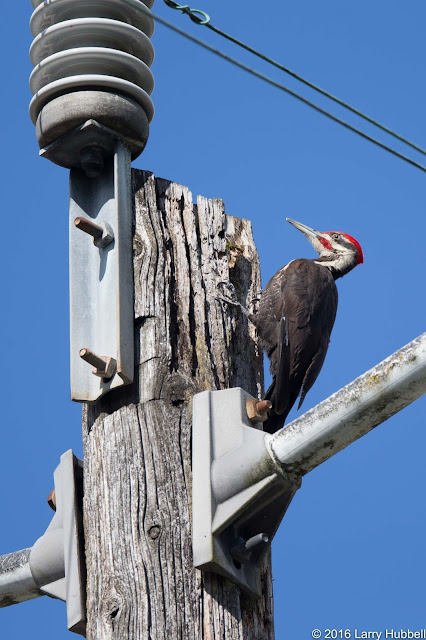 I tried to follow Storm, but she was too quick for me. Instead it was Chip who once again attracted my attention. He stationed himself high above a Montlake street and he was no longer feeding.

Every few minutes he would rapidly rattle the top of the telephone pole. The pole vibrated like a 40 foot tall sounding board. After each rhythmic rattle, Chip would stop and listen. I had the clear impression he was declaring his territory and listening for any potential competitors. I never heard a response - however the appearance of Chip and Storm (the day after writing the initial part of this post) almost felt like a response.

Storm may have lost her second winter roost and I may not know where her new roost is, however it is obvious to me that she has found a mate in Chip. If "Home is where the heart is" then Storm is no longer...Homeless in Seattle.

If I left out anyone's comments please forgive me, it has been a busy week.