In the Eyes of a Hobbit 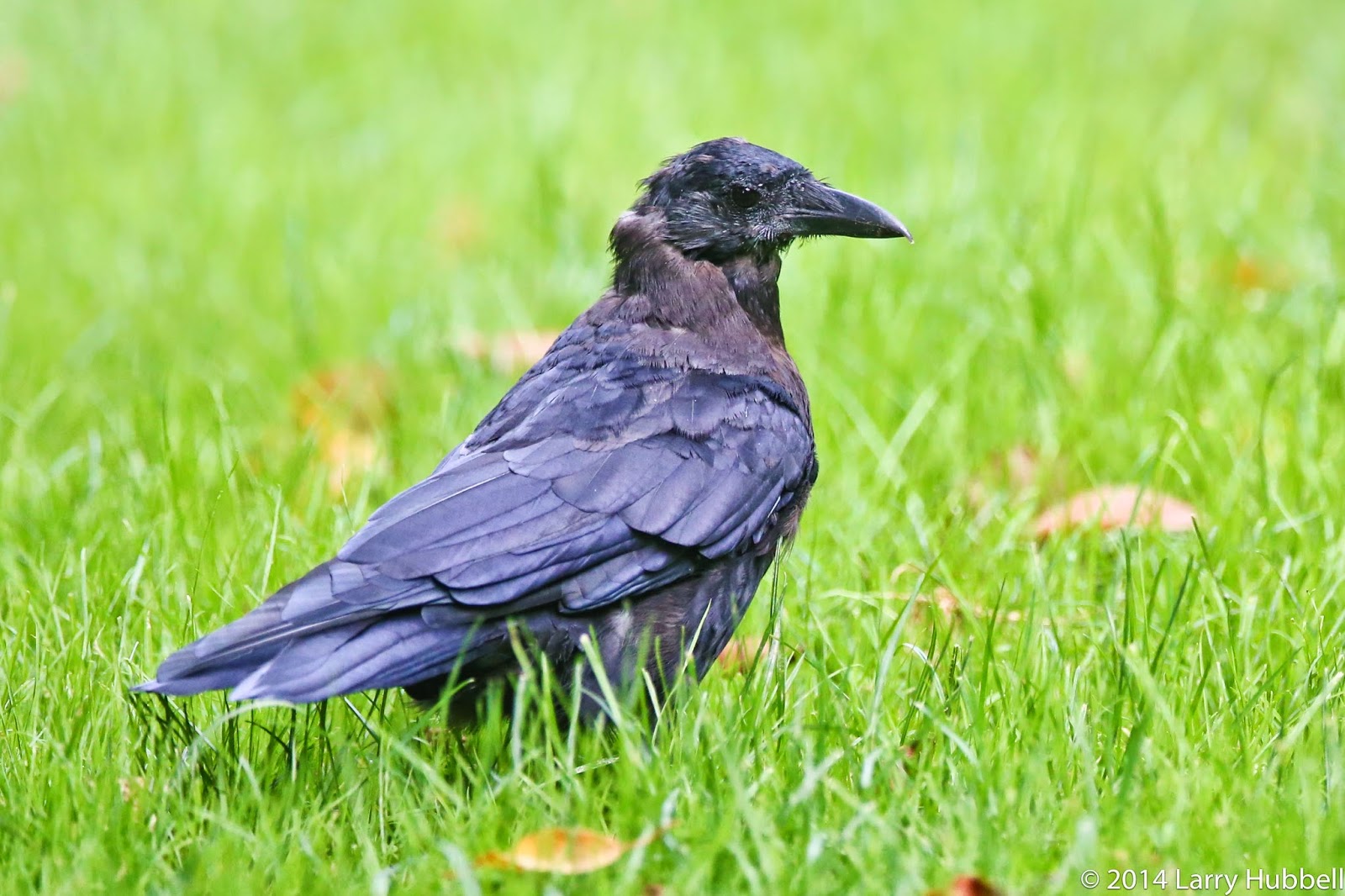 Last weekend, the unkept appearance of this crow caught my attention. Closer inspection shows the wing feathers appear crisp and clean, while the neck feathers are worn and frayed. 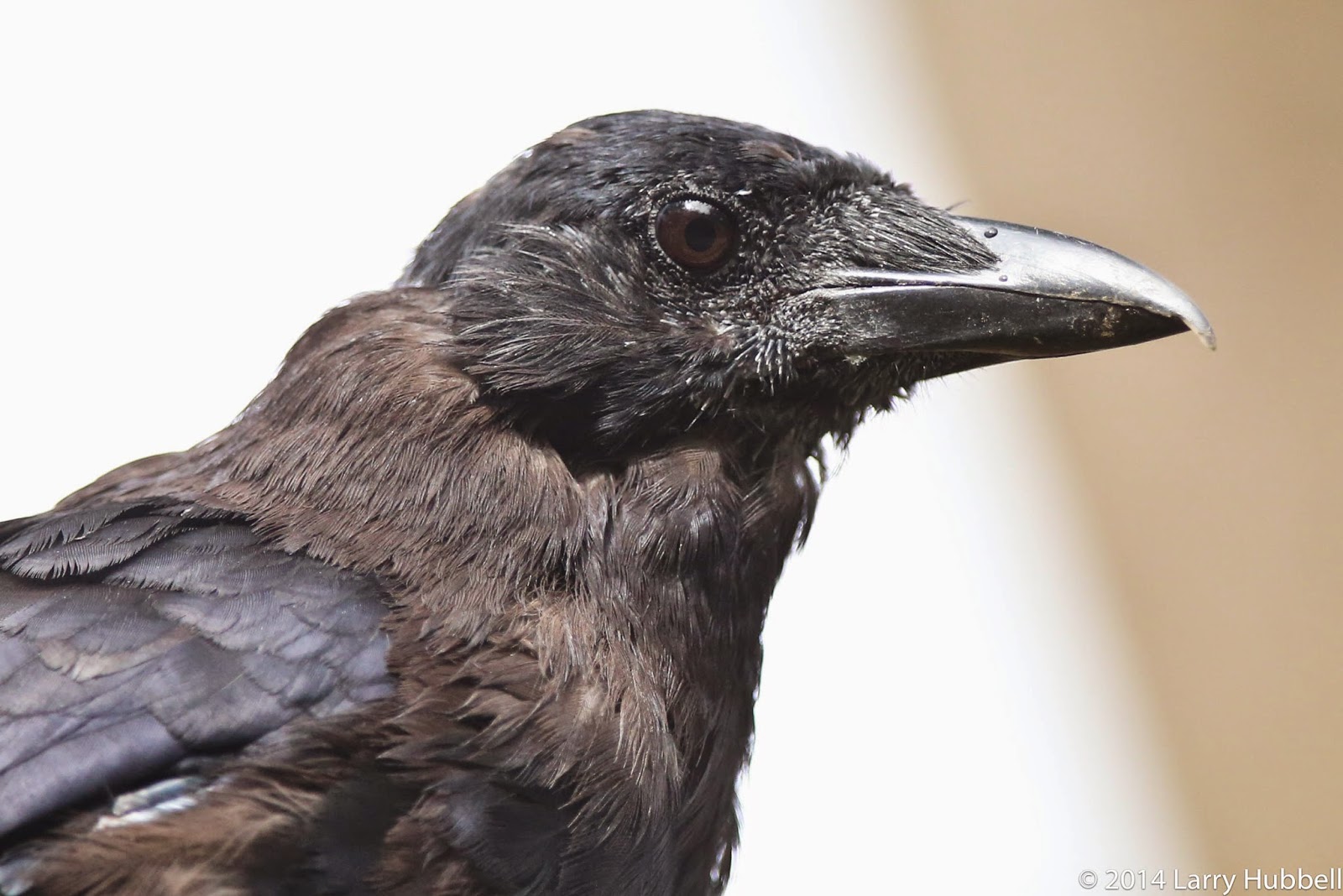 The frayed feathers are also not as black as the rest, possibly they are faded with age. The crow may be in the process of forming fashionably new fall feathers. One way or another, this crow certainly gives the impression of being old and wise.

You have probably read the stories about the intelligence of crows, particularly with some of the research being done at the University of Washington, but did you know that in captivity crows have lived to be 59 years old? While the passage of time does not guarantee wisdom it does increase the opportunities to learn.

Even if you are not a scientist you can easily observe the intelligent behavior of crows. The look in their eyes as you pass them displays their careful calculation. "Is this person really dangerous? Should I make a quick escape via flight, and leave a potential food source, or should I just hop a few feet away and test to see if they chase me?" Unlike most birds, crows often choose to test us rather than take flight. The number of crows in Seattle seems to validate the intelligence of this approach. By carefully weighing the risk versus the return, crows end up with more food than other birds and more reproductive success. Maybe humans aren't the only ones who do return-on-investment calculations. 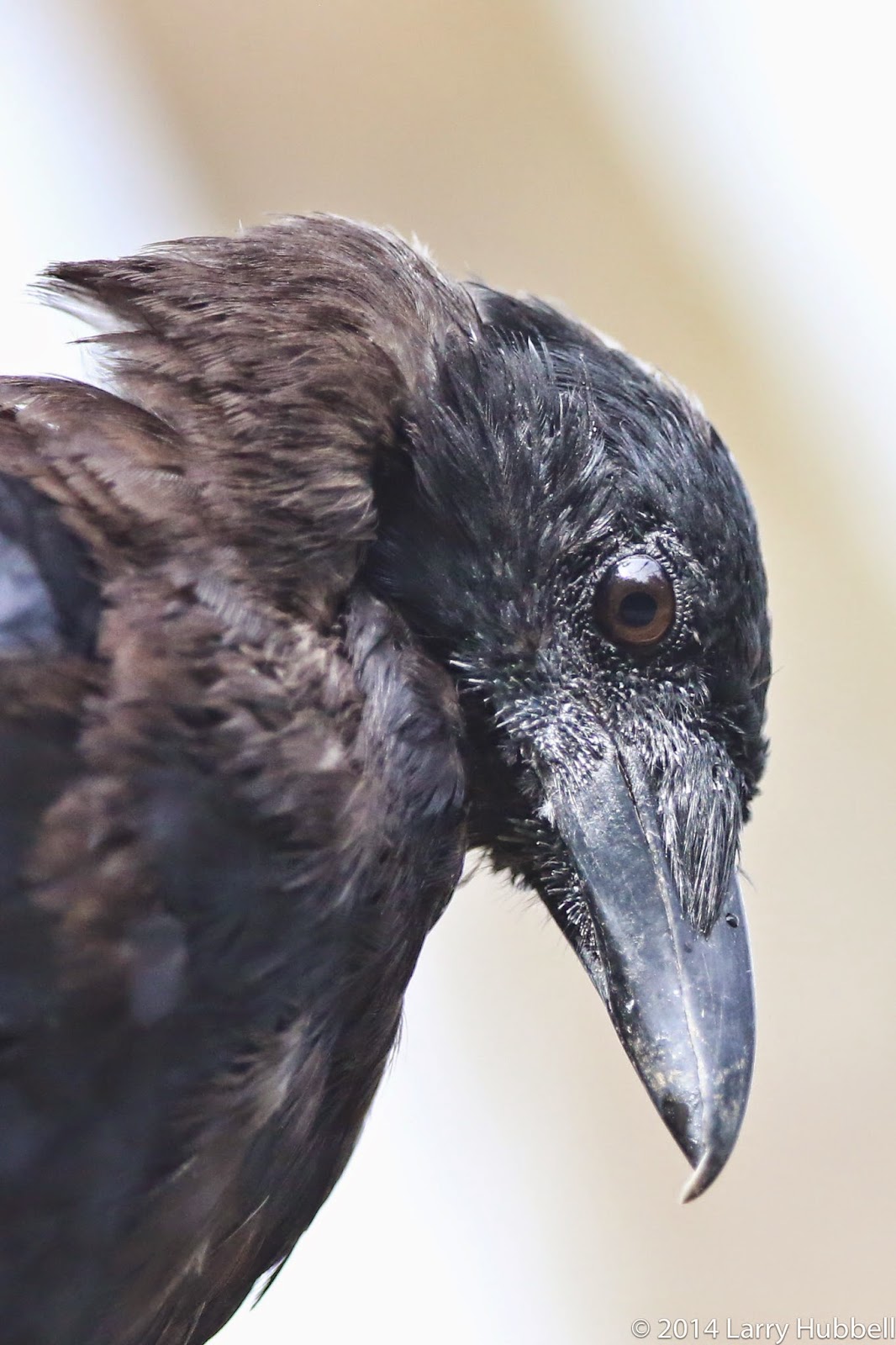 Crows also end up with more food because they are are smart enough to use a wide variety of strategies.  After a light rain, this bird appeared to be looking for worms in the grass, similar to the behavior of a robin. Crows also obtain food by throwing moss and leaves out of gutters to find tasty tidbits growing under the litter. They do this same procedure on both street and house gutters. I have heard crows have been seen scouting out robin's nests and waiting until the young robins are just ready to fly, e.g. optimal size, before coming back to consume them. In June, when mature 3 inch long fish  spawn in Union Bay, the crows can be seen flying out over the bay to pick the tiny, floating fish bodies out of the water.

Just like Husky fans gathering before the big game…

…crows gather after the big game. The number of crows the morning after a Husky game appears to be similar to the number of people at the game. By the way, on a per ounce basis I think the crows are louder.

Whether it is after a game or in an alley behind your house, the crows love the food scraps we leave behind. The Cornell Lab of Ornithology says crows also love to harass other birds, who have food, in hopes that they will drop their catch and leave it for the crows. Obviously, crows are quite successful without additional help from us. If we would like to maintain diversity, e.g. a wide array of birds, in our city and around Union Bay we should really attempt to keep our scraps out of the mouths of crows. 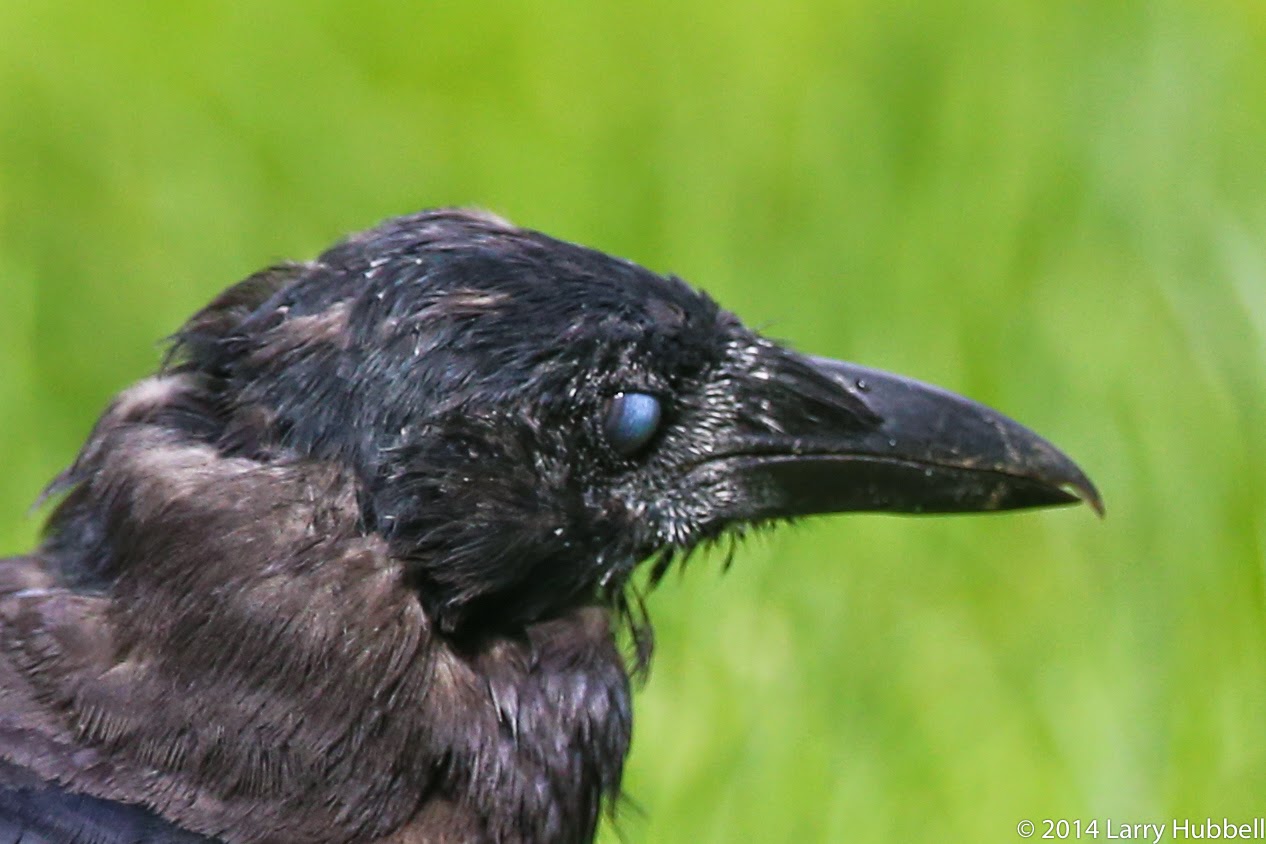 Returning to our crow on the grass, in this photo he has momentarily blinked the nictitating membrane across his right eye. In the process the membrane has reflected the blue of the sky and makes the bird look a bit like a wise, old soothsayer who can forecast the future.

As I was taking these photos, a man and woman stopped to look at the bird. I learned that they were from Germany and the woman said, "We call this bird a hobbit". Since then I have tried various online translations of the word "crow" from English to German. The word I get is "krahe", not hobbit, which confused me a bit.

I also looked up various online definitions of hobbit. Basically they say, "A small, intelligent human-like creature." I have come to think maybe the use of the term hobbit has more to do with crows being small, intelligent and almost human-like creatures. Cornell says, unlike most other birds, crows maintain their family units for longer than the first year. Maybe they are socially similar to humans as well. 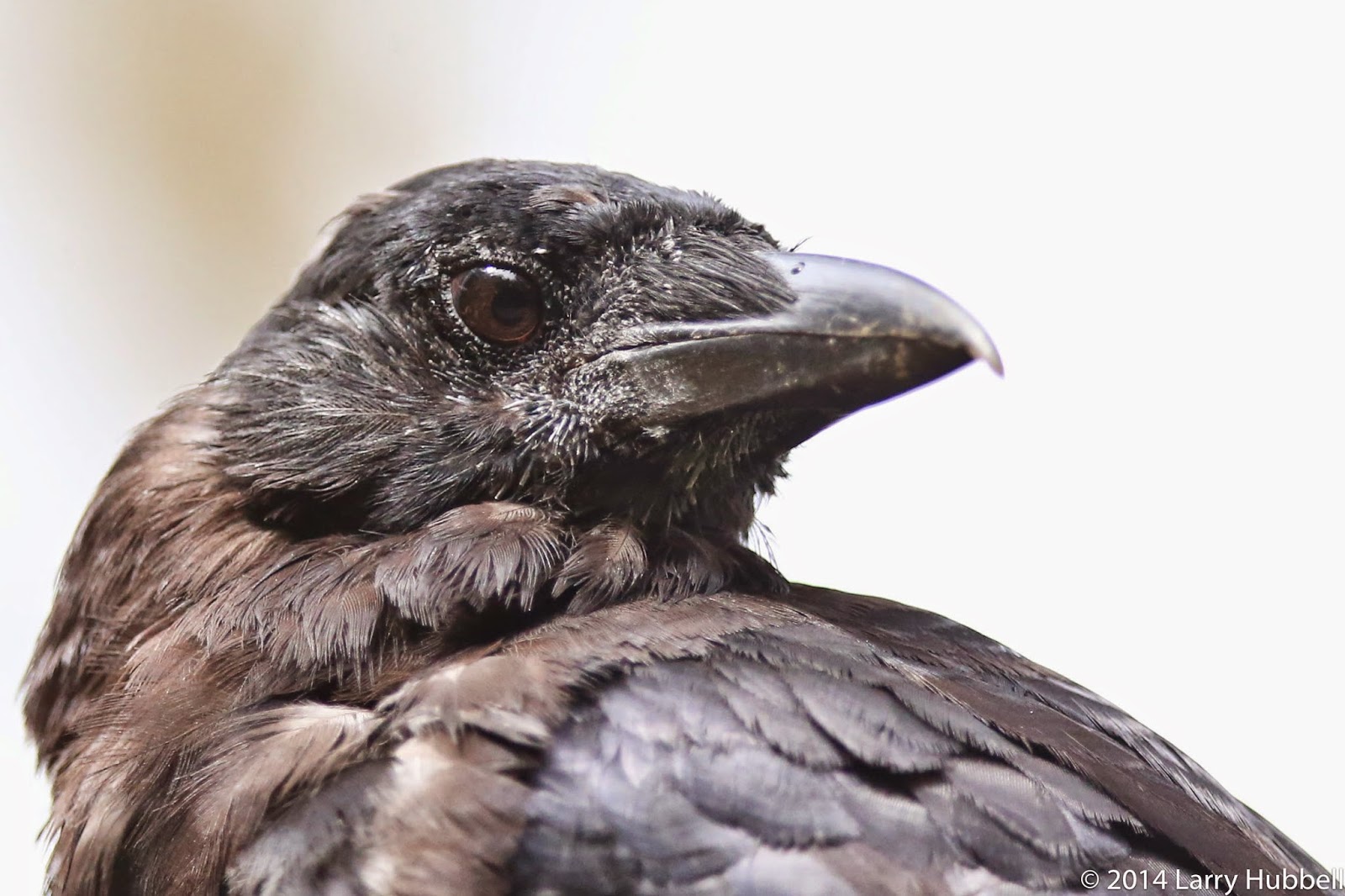 In any case, the wise, old crow I was watching worked very hard to keep his eye on me. He would twist and turn no matter which way his body was headed so that his right eye was always the one tracking my movement. Finally, he must have decided I was benign and he allowed me to see his left eye. 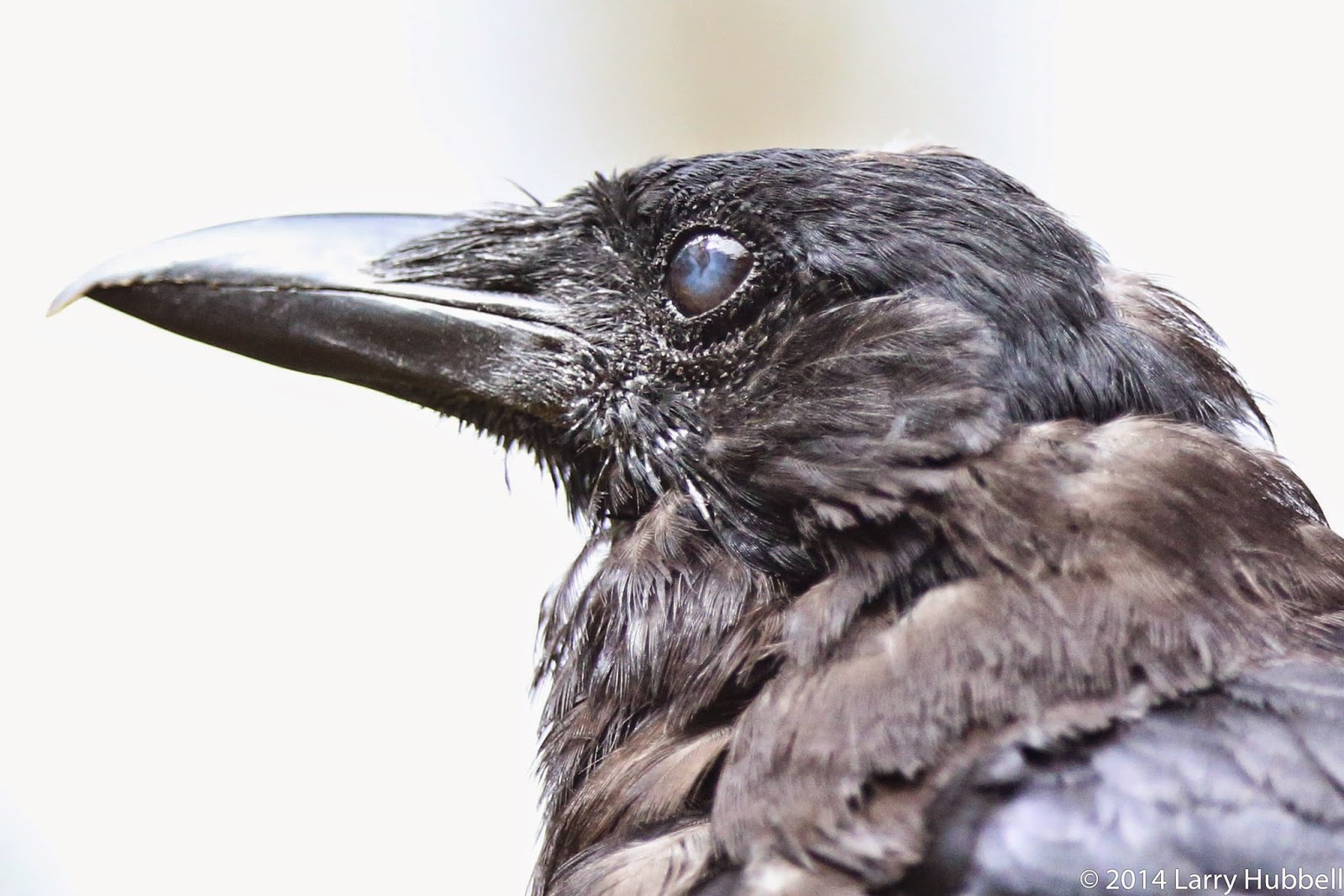 It is clear the blue reflection in this eye is not from the nictitating membrane. I would guess some type of eye disease has robbed this bird of sight in its left eye. 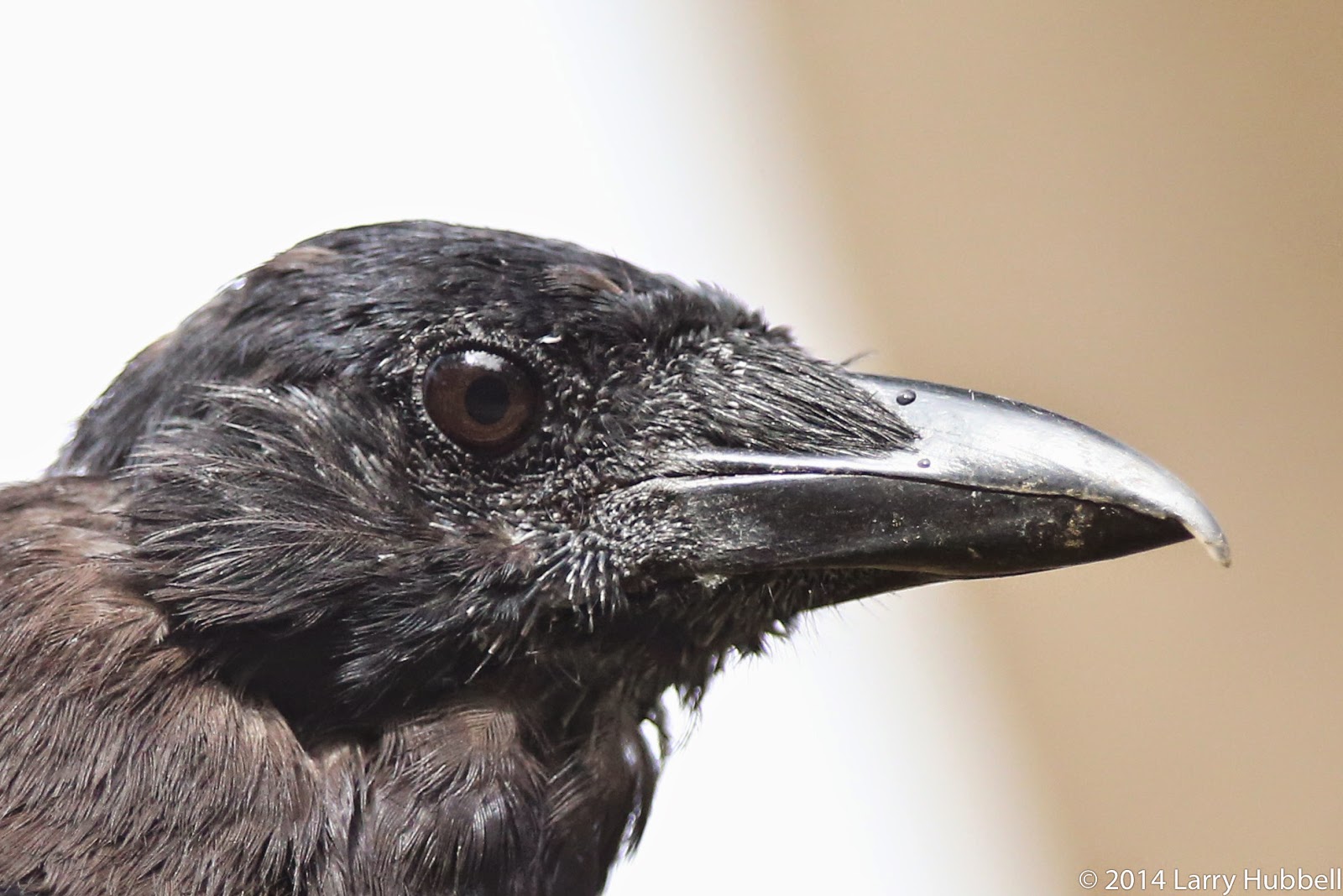 Still the penetrating look in the right eye leaves no doubt in my mind about the intelligence of this wise old hobbit.

You can find more "hobbit" information under  Cool Facts on the Cornell website. 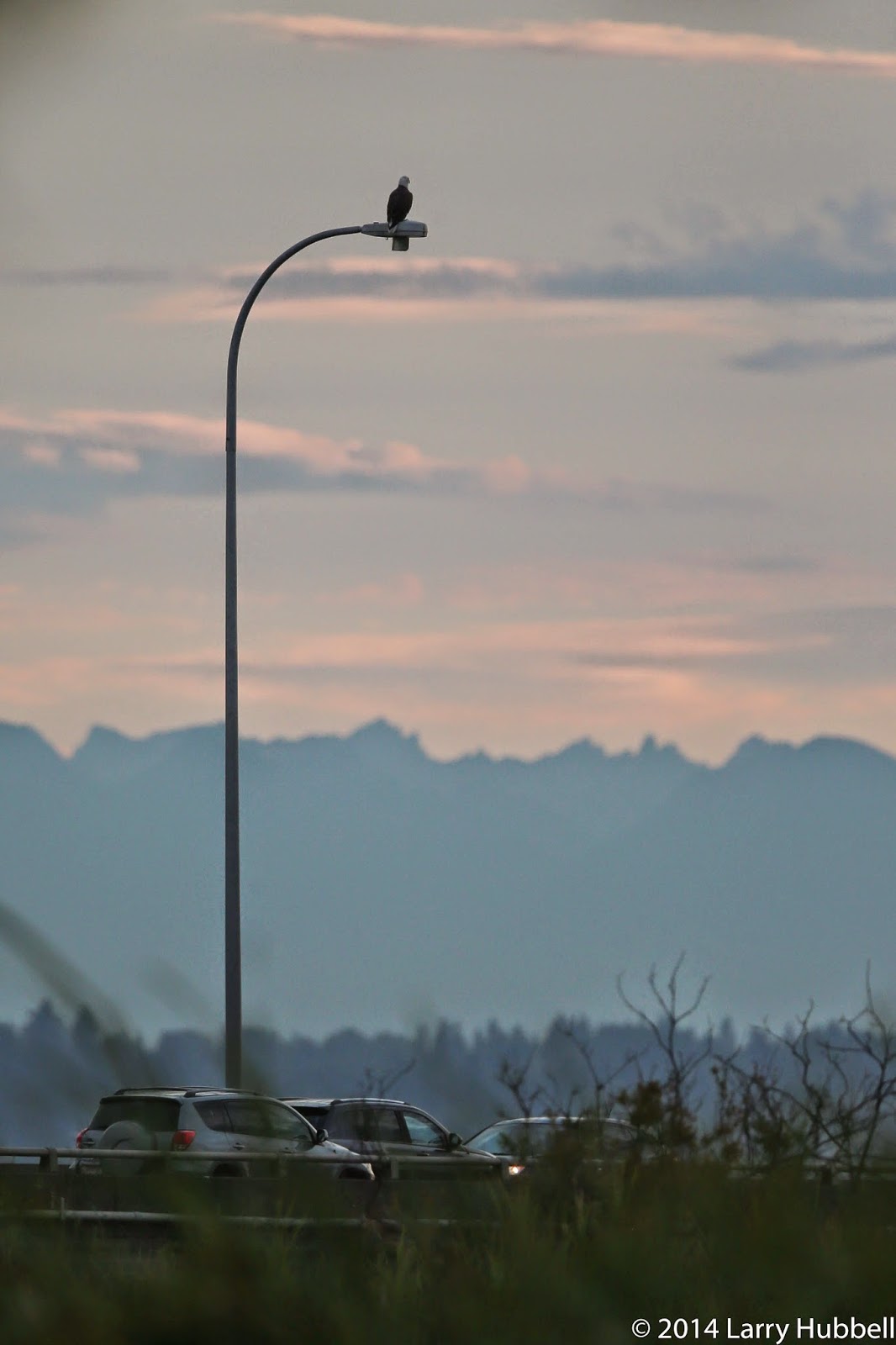 By the way, around dawn on Tuesday morning an eagle returned to one of the 520 light poles. It stayed for a few moments before heading north across the bay. I have not seen an eagle since nor any sign of an eagle on the Broadmoor nest. In the past when Eva and Albert return in the fall they have spent some of their time at the nest, occasionally doing a little up keep, in the form of new and additional pieces of wood. While this eagle may or may not have been Eva or Albert, it does not appear the pair have returned to take possession of their territory.

Have a great day on Union Bay…where nature lives in the city and wise old hobbits abound!