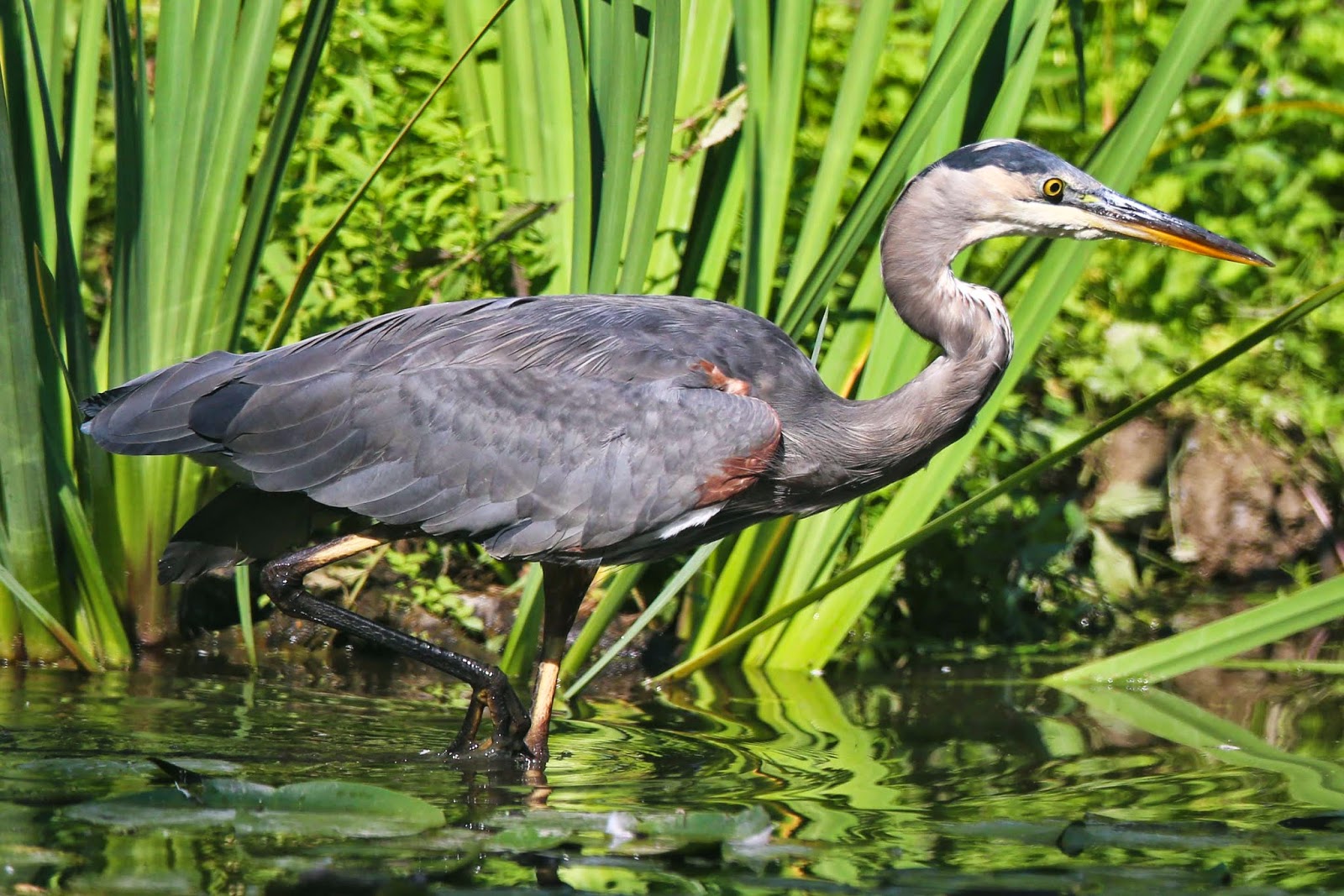 This Great Blue Heron was spotted on Monday striding slowly through the shallow water near Elderberry Island, just to the southeast of the WSDOT peninsula. The short dark plume, the dark on the upper mandible and the relatively small amount of white on the crown of the head seem to indicate this is a young bird. It may even be the same bird seen two weeks earlier, southeast of Foster Island, playing "Catch and Release" with tadpoles. 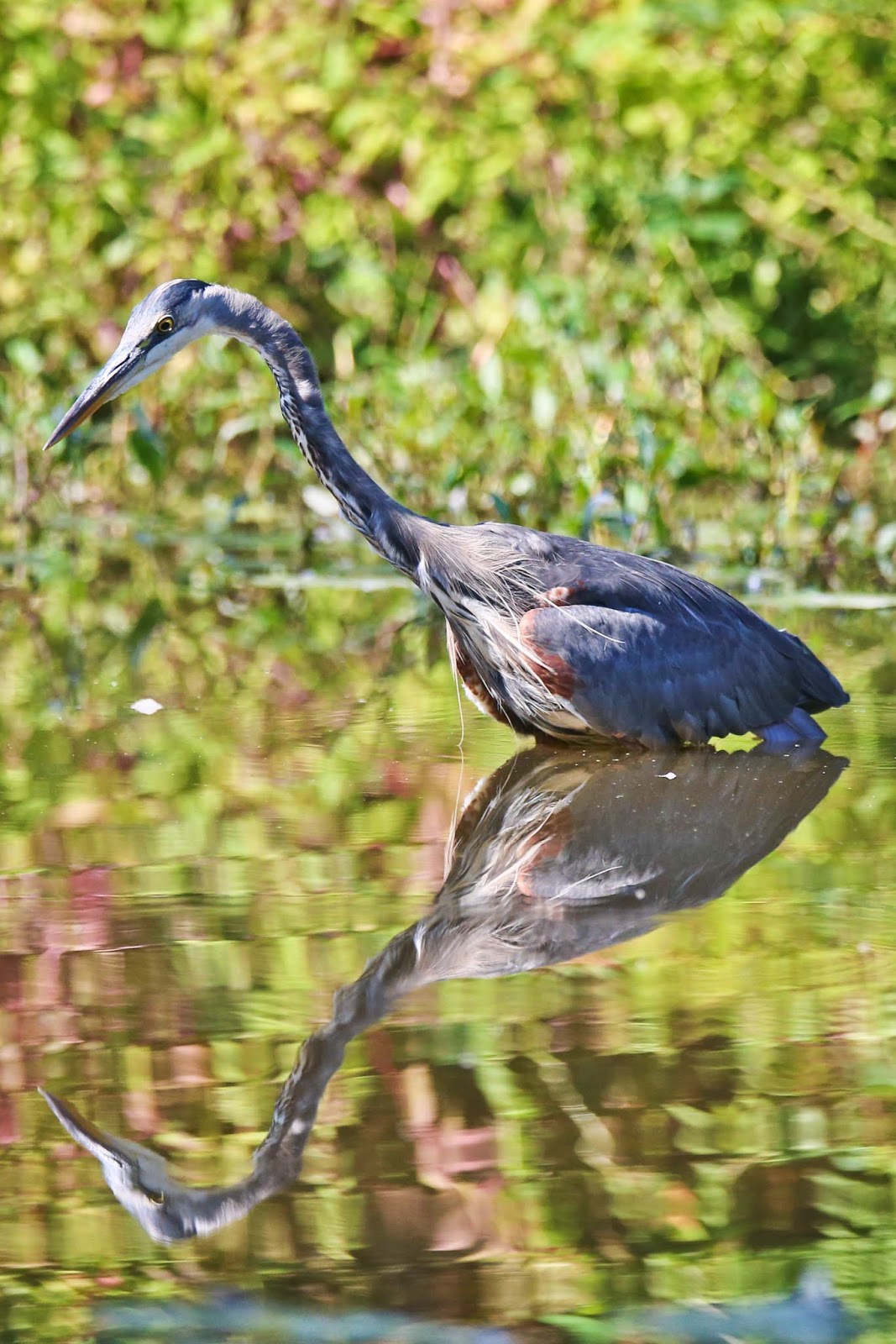 When the bird spotted potential prey it seemed to freeze in place, apparently waiting for the prey to come within striking range. When extended, the long thin neck also looked very similar to the bird photographed two weeks earlier. Even though the water remained nearly undisturbed, the prey must have been moving below the surface. Suddenly… 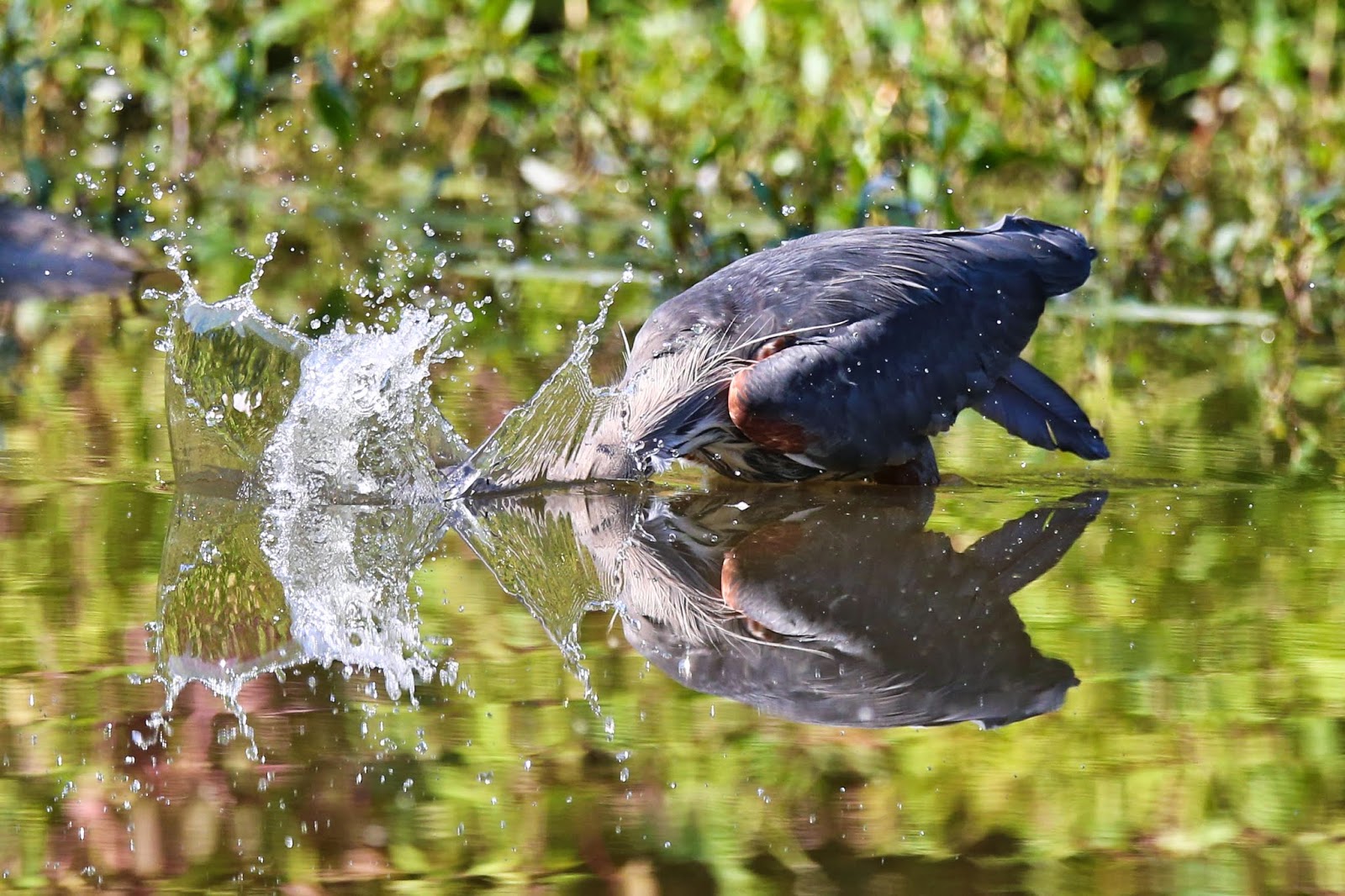 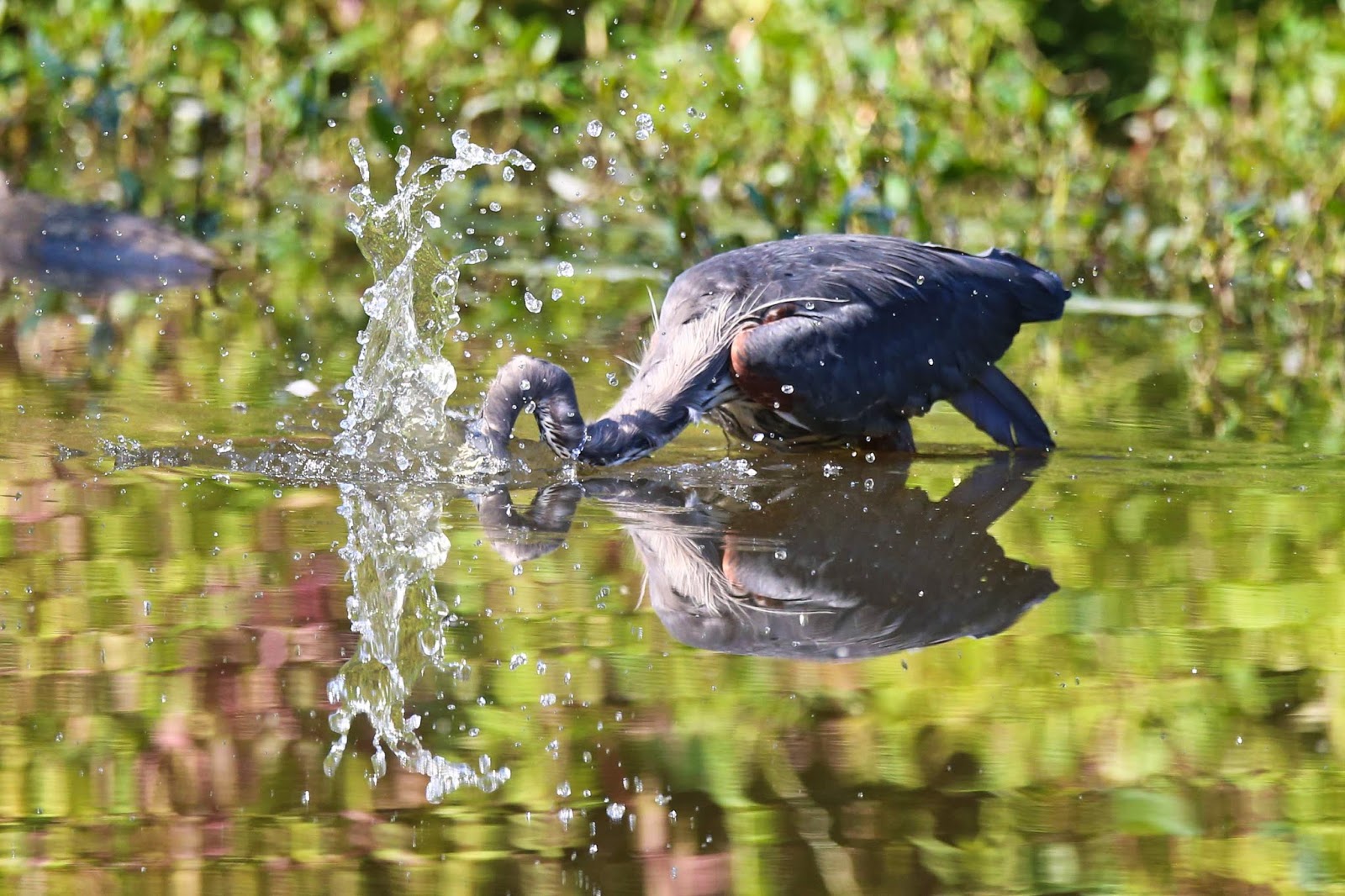 (10:24:13 a.m.) In approximately one quarter of a second the heron pulls its neck out of the water. The water appears to reach the peak of the splash and starts to coalesce into globs. 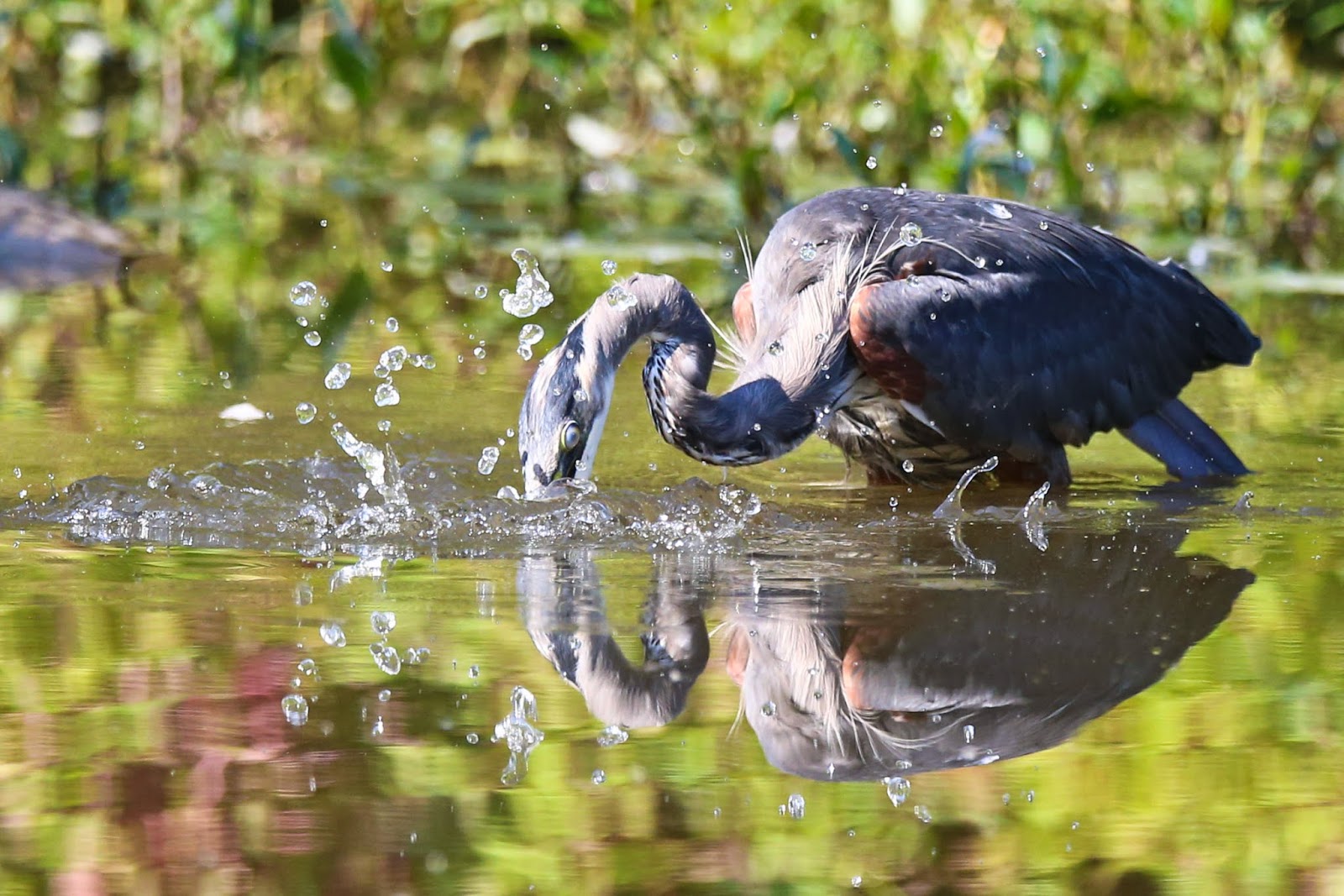 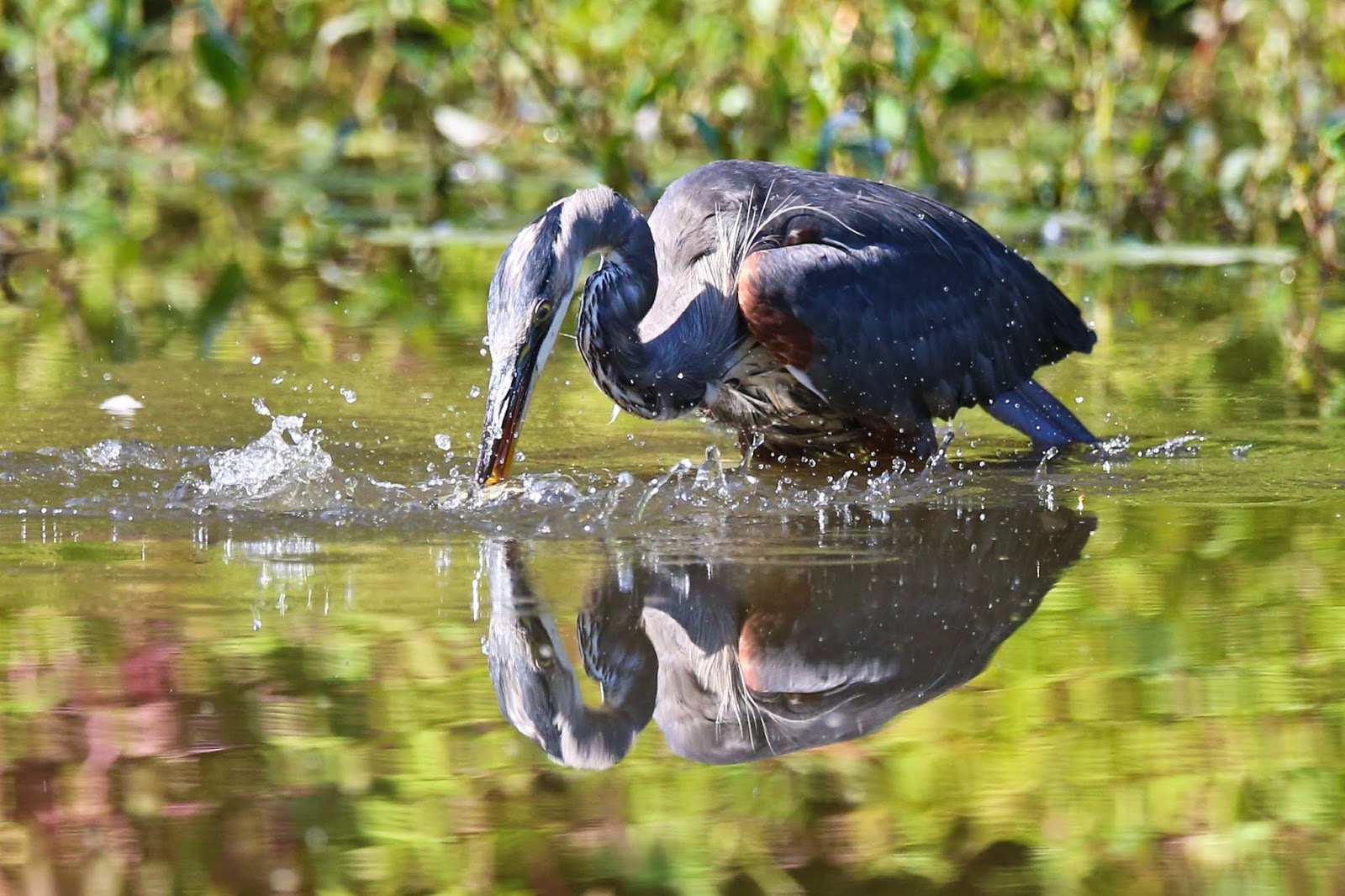 (10:24:13 a.m.) In about three quarters of a second the heron's full head is nearly visible and secondary splashes abound. 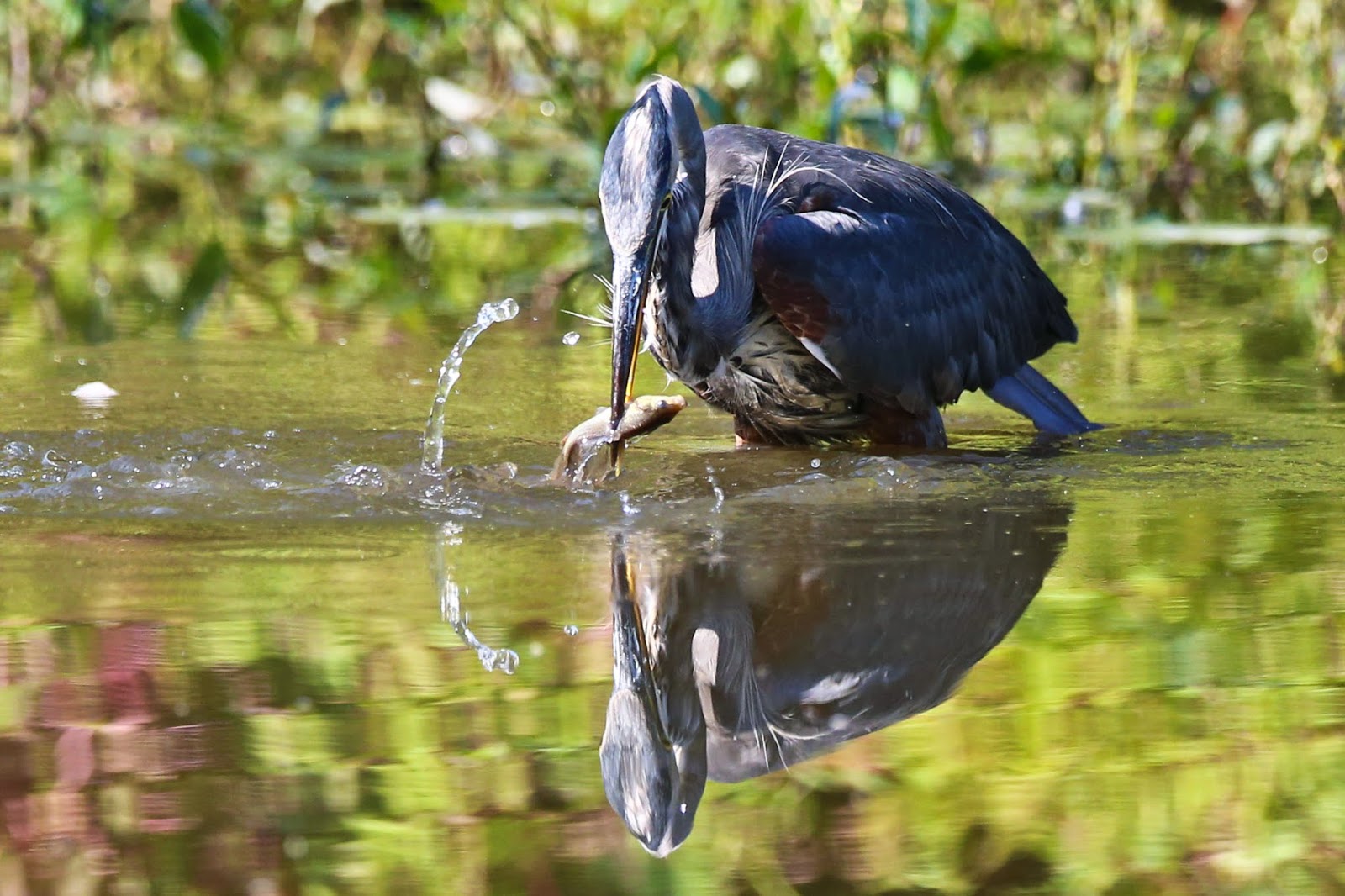 (10:24:13 a.m.) In just under a second the fish emerges from the water and a swing of the fish's tail or maybe the final blob of falling water causes one last leaping lunge from the liquid of life. 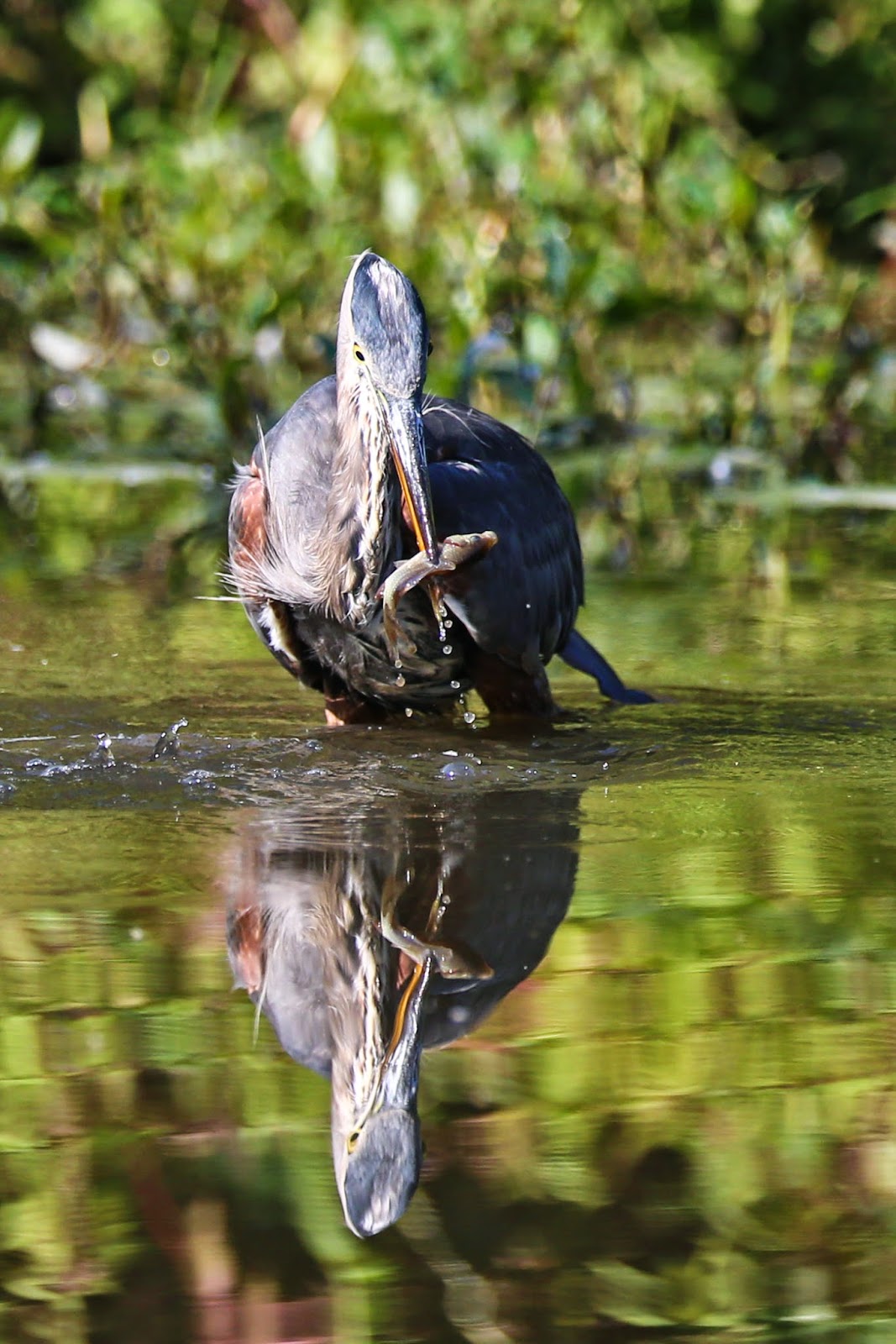 (10:24:14 a.m.) In one full second the water is beginning to calm and the heron begins to turn towards shallower water. 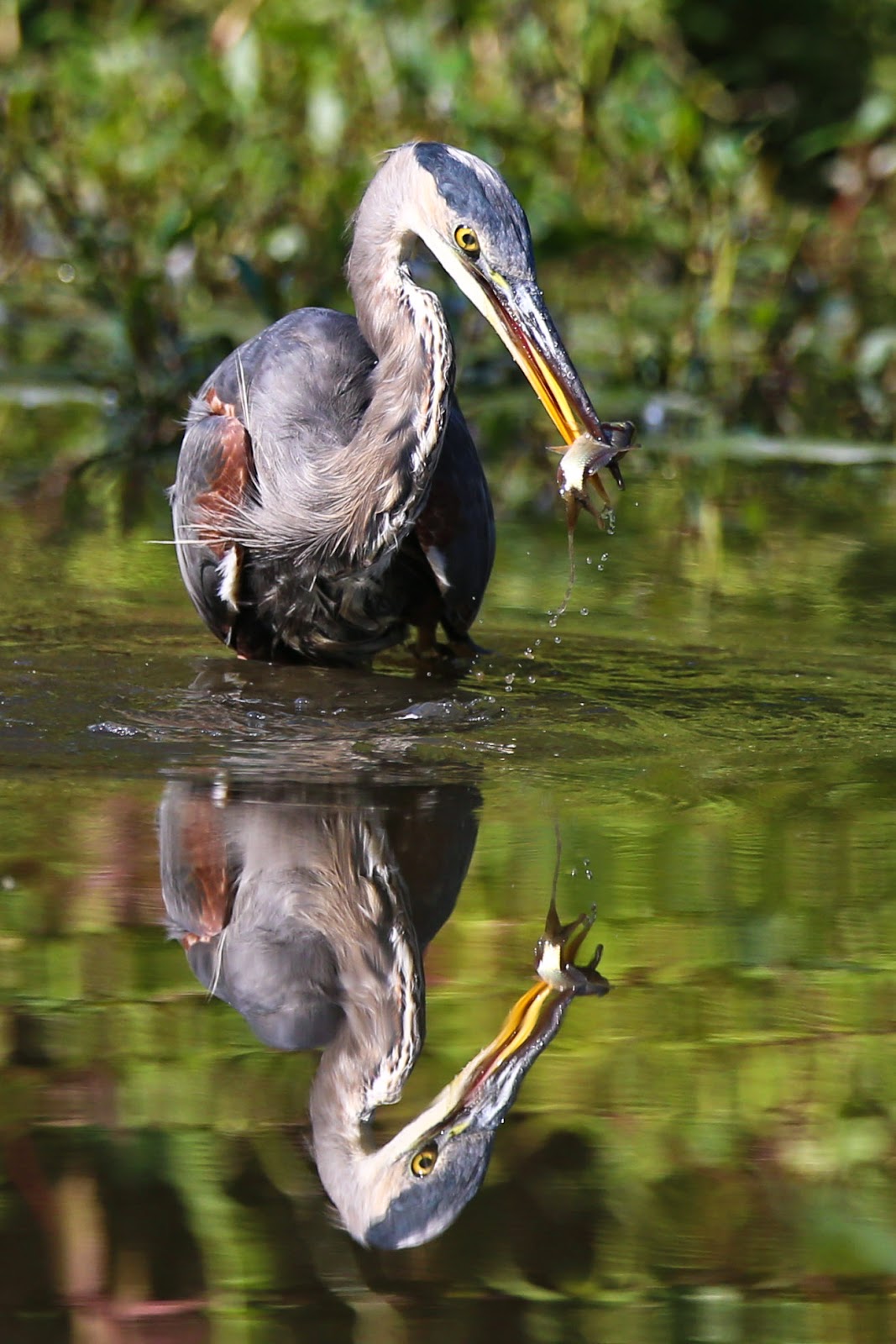 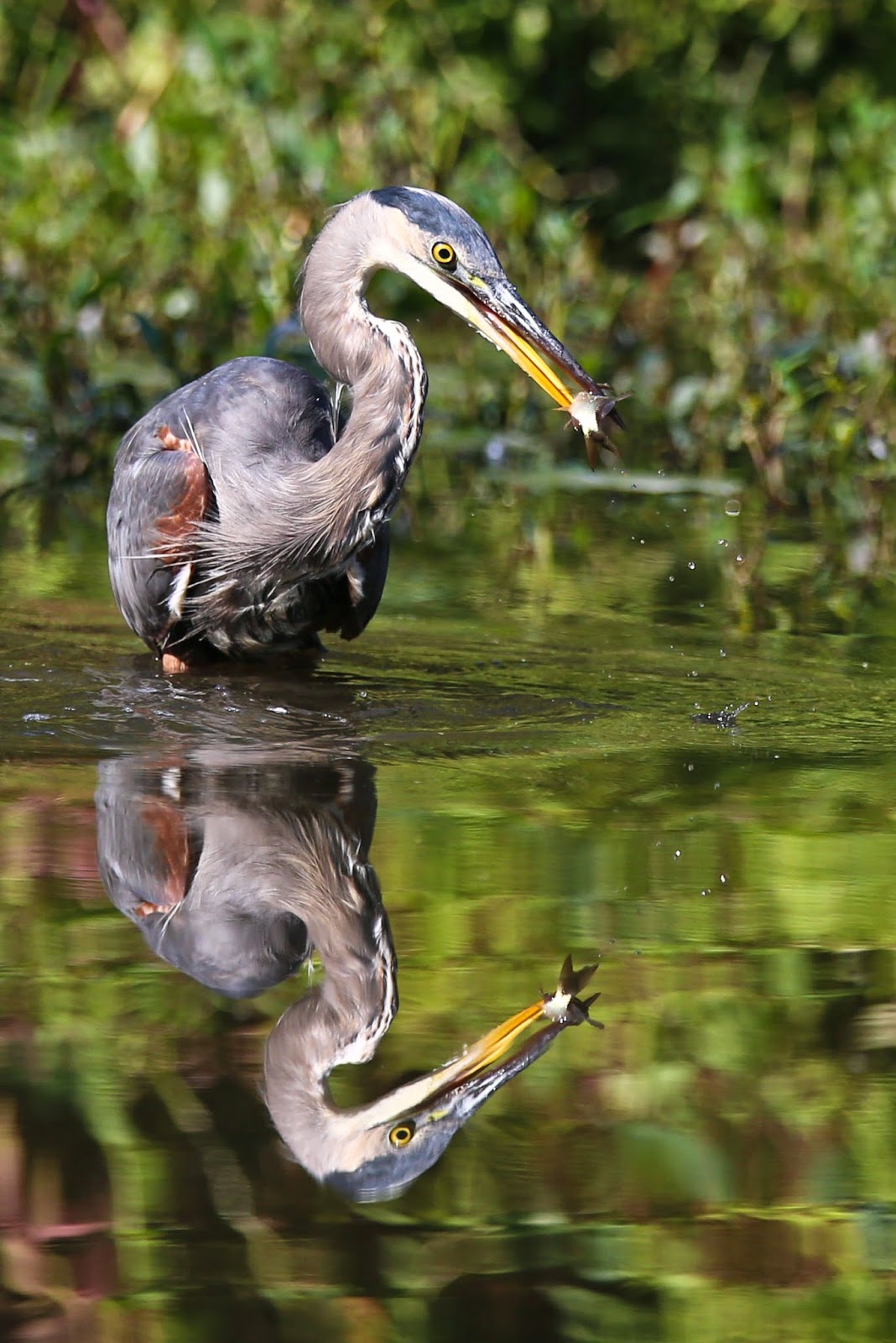 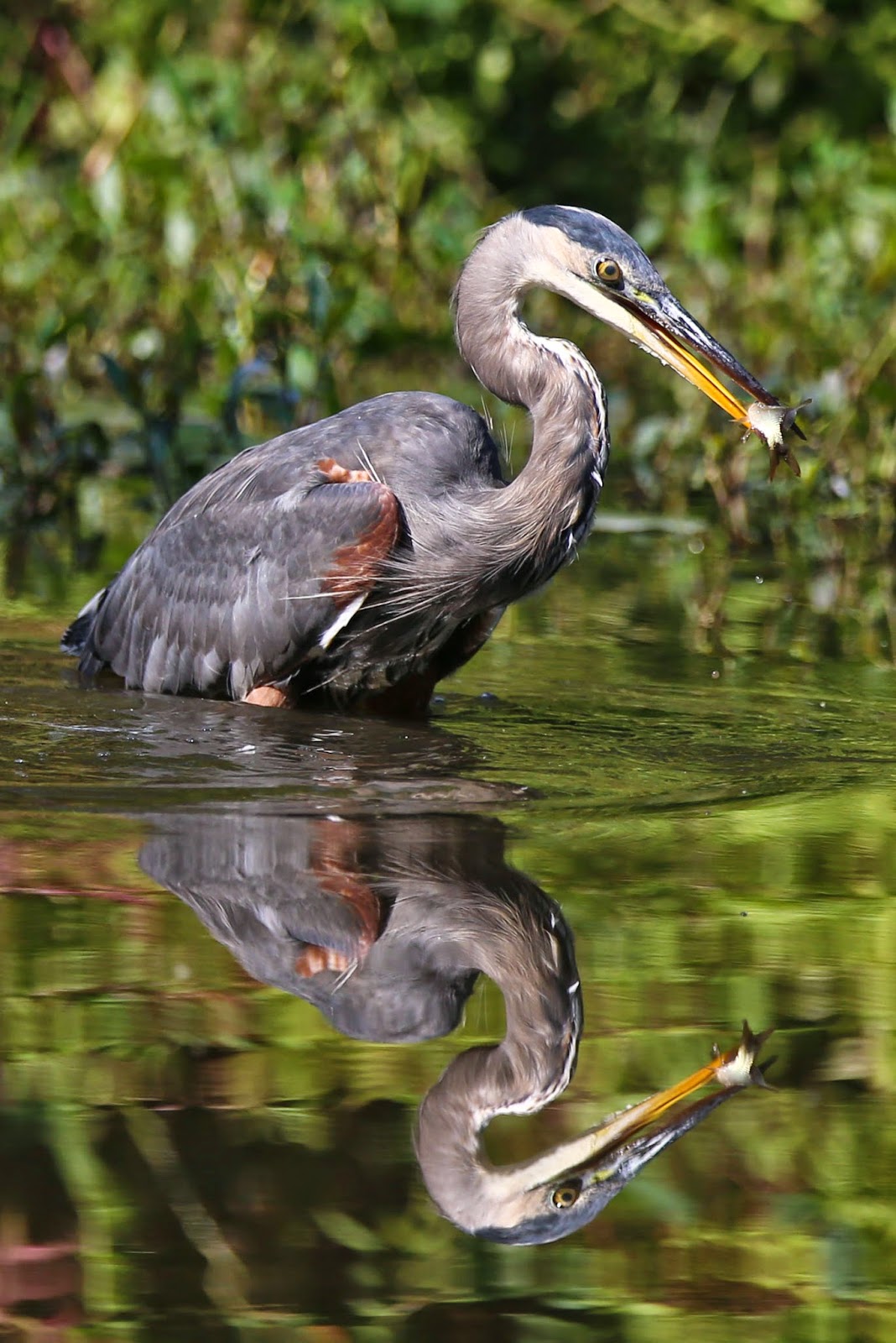 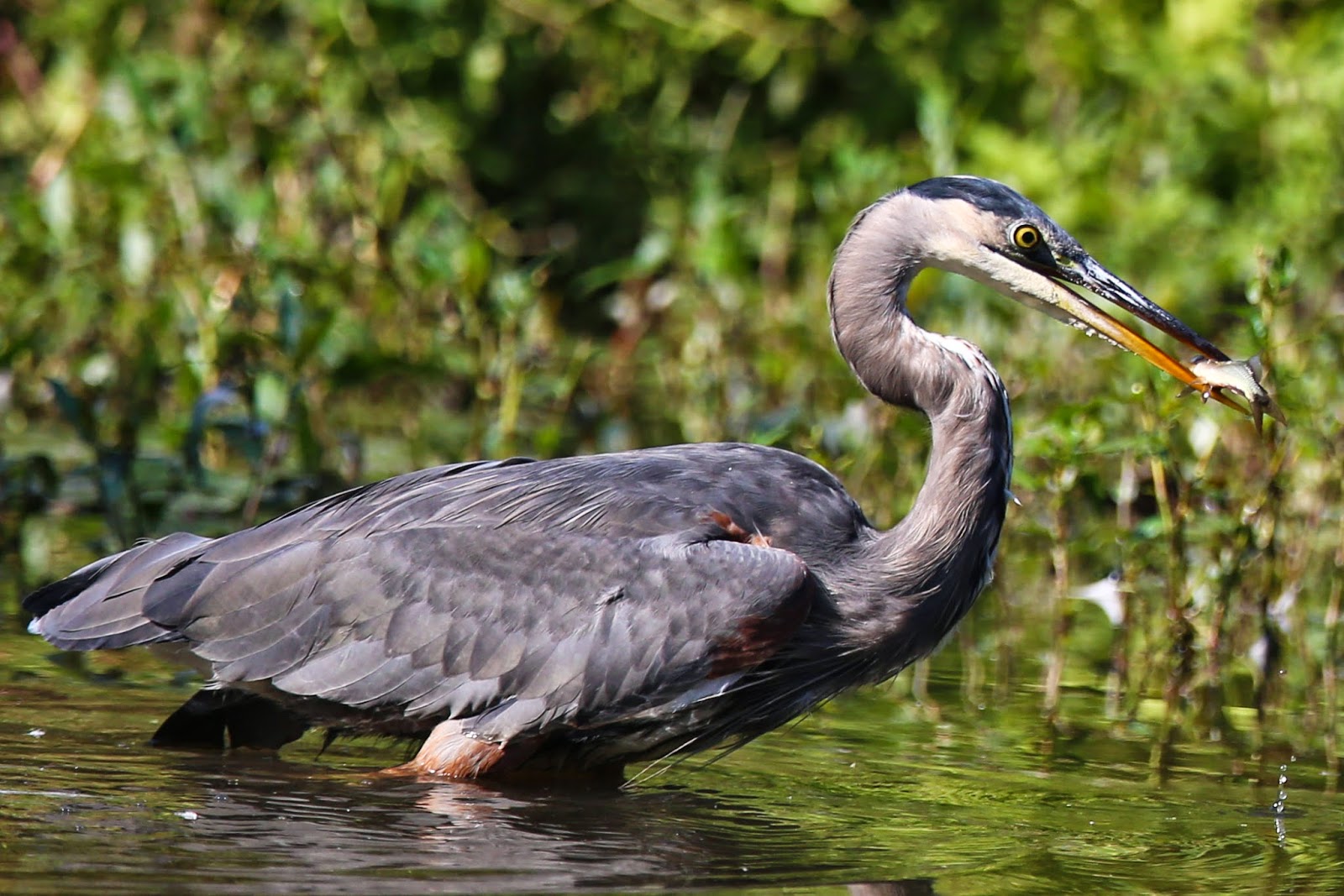 (10:24:14 a.m.) In less than two seconds the fish is caught, the splash of the water subsides, the heron turns completely around and moves into shallower water. If one scrolls through the pictures, without reading any of the verbiage, it seems impossible to comprehend the photos at the speed with which they happened. They just become a blue-green blur of motion, which is pretty much what happened when the experience was viewed live. 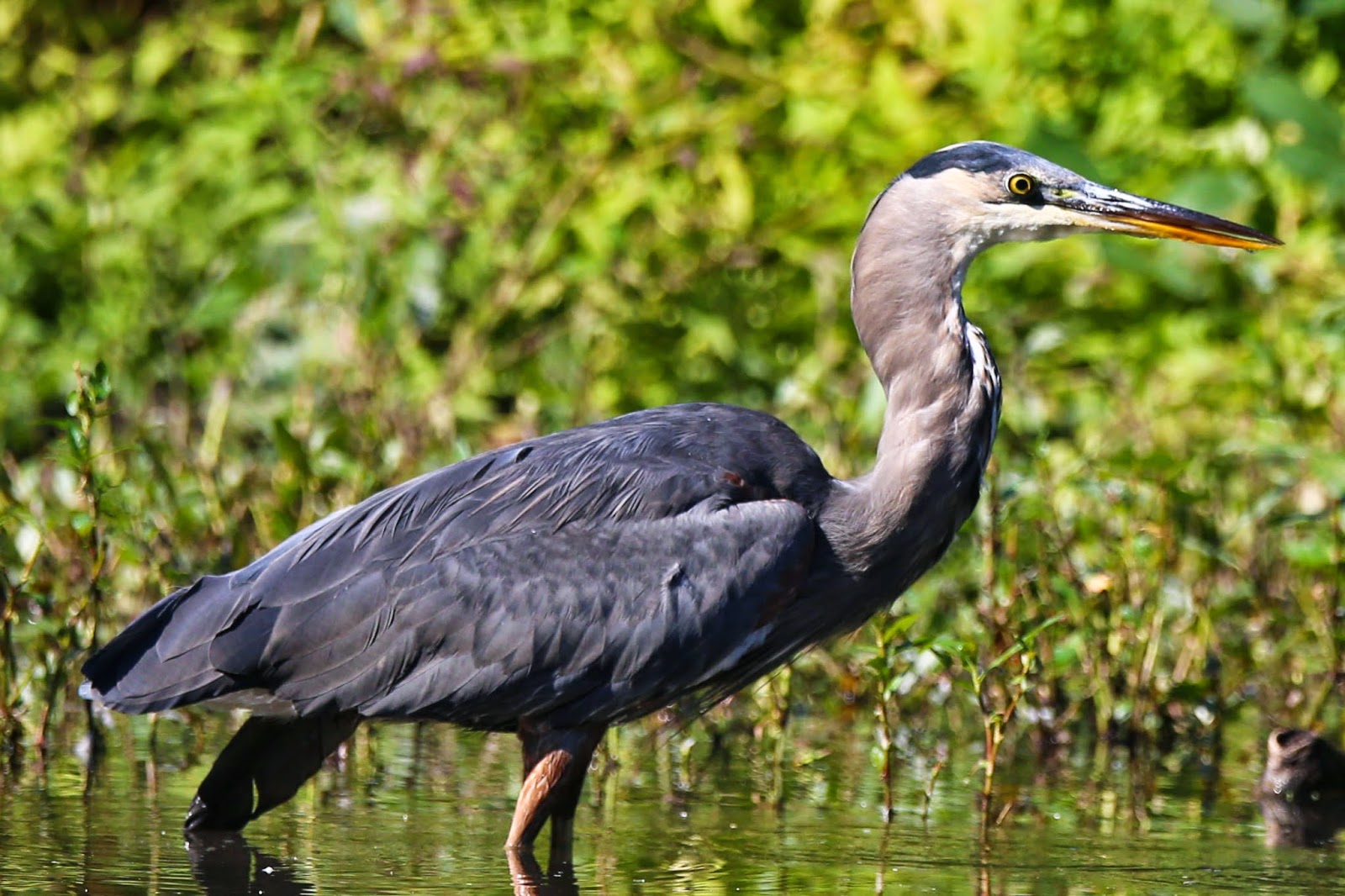 (10:24:25 a.m.) In 12 seconds the fish has been turned head first, passed through the mouth and is now only "visible" in the increased size of the heron's neck. In spite of its speed of operation, the heron appears perfectly calm, in-balance and even stately in every photo. The speed of the heron is striking! 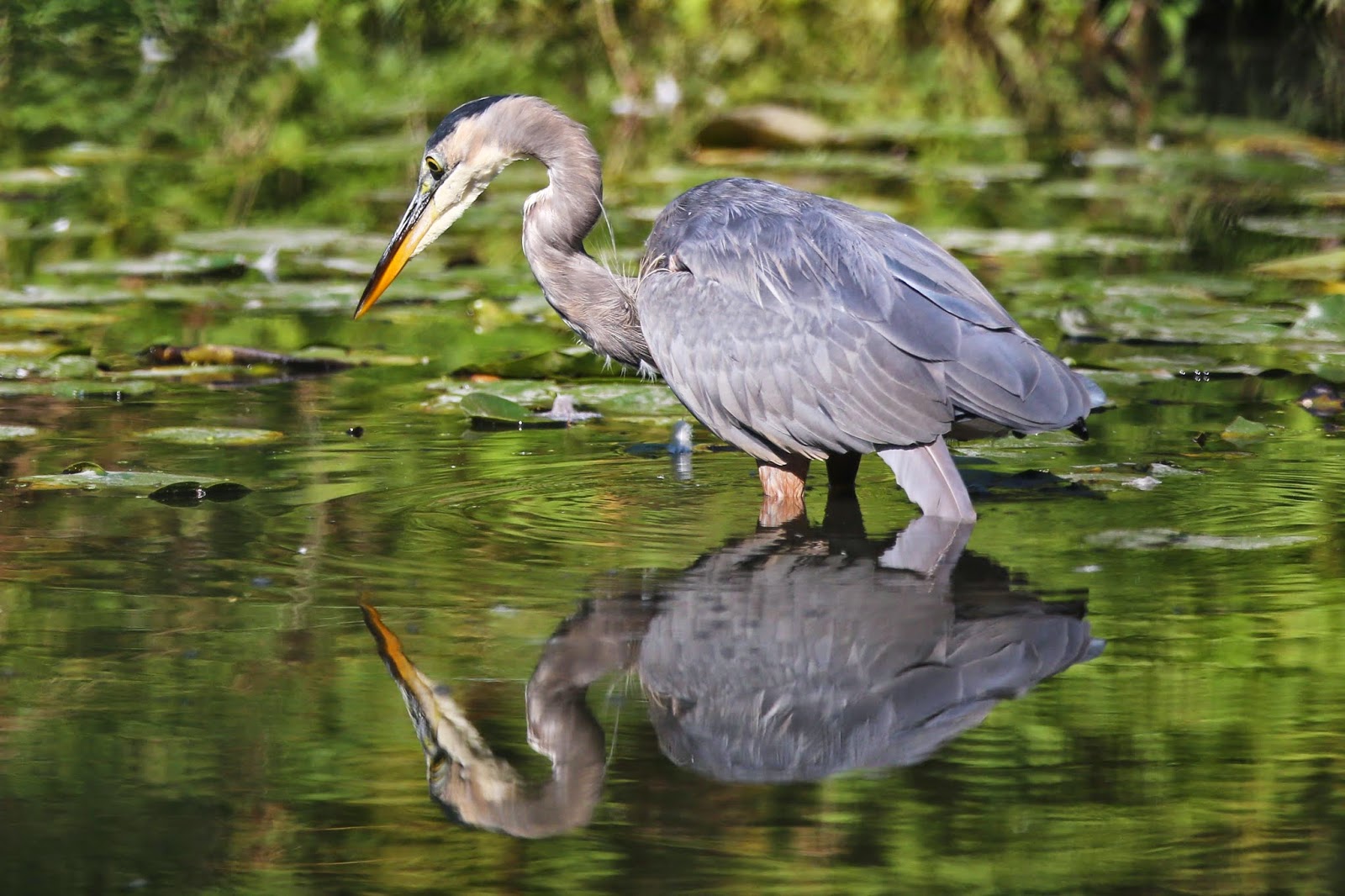 By the way, you may have noticed that the heron's left wing tip is hanging below its body. In the mornings since these photos were taken, what appears to be, the same bird has been spotted repetitively in the same location. Each time there was no longer any apparent miss alignment of the wingtip. 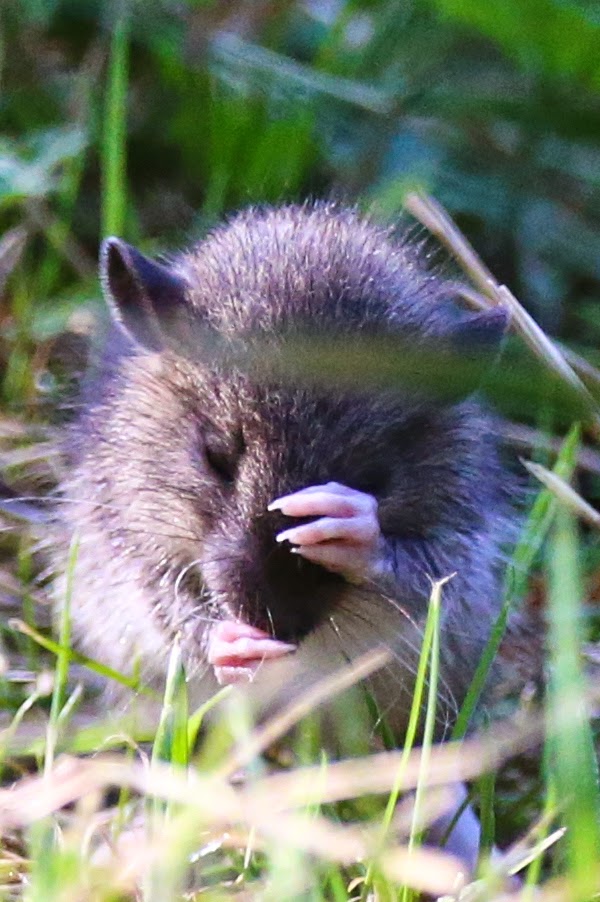 A few minutes earlier a mouse was spotted wandering through the nearby grass. What was most striking about this encounter was how similar the paws are to human hands. The blueprints for life on earth seem to have a lot in common. 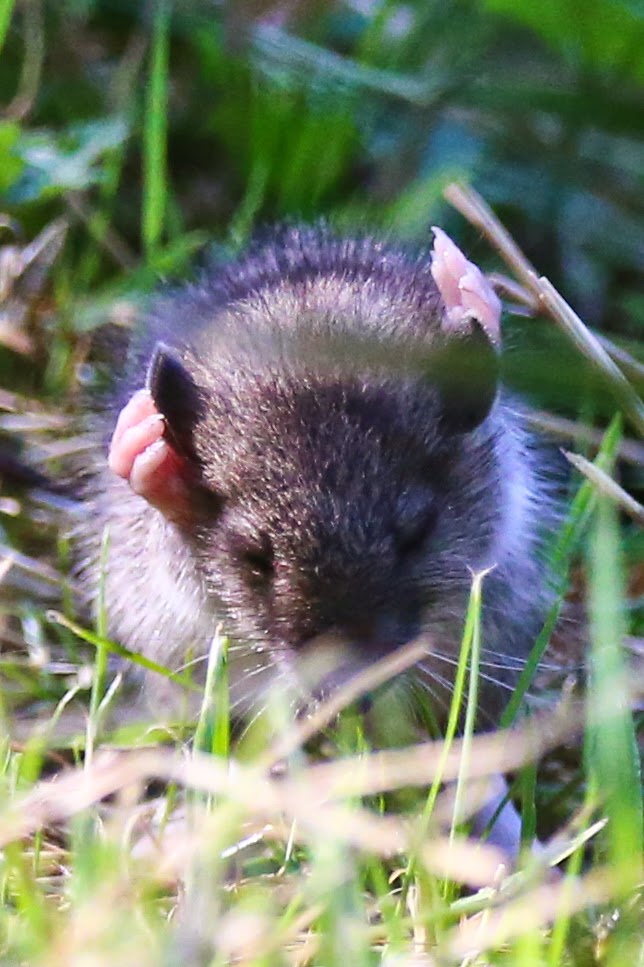 For a few moments it tracked an insect that bounced along on the top of the grass. As someone who usually watches birds it was odd to think of the mouse as a predator. 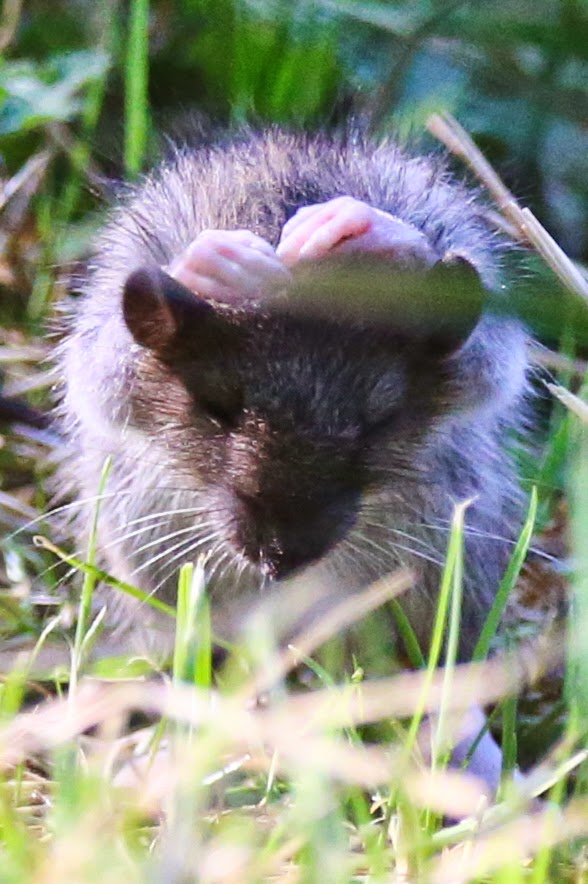 Twice in about 15 minutes, the mouse stopped, licked its paws and then cleaned its head and face. Apparently, they are cleaner than their reputation. 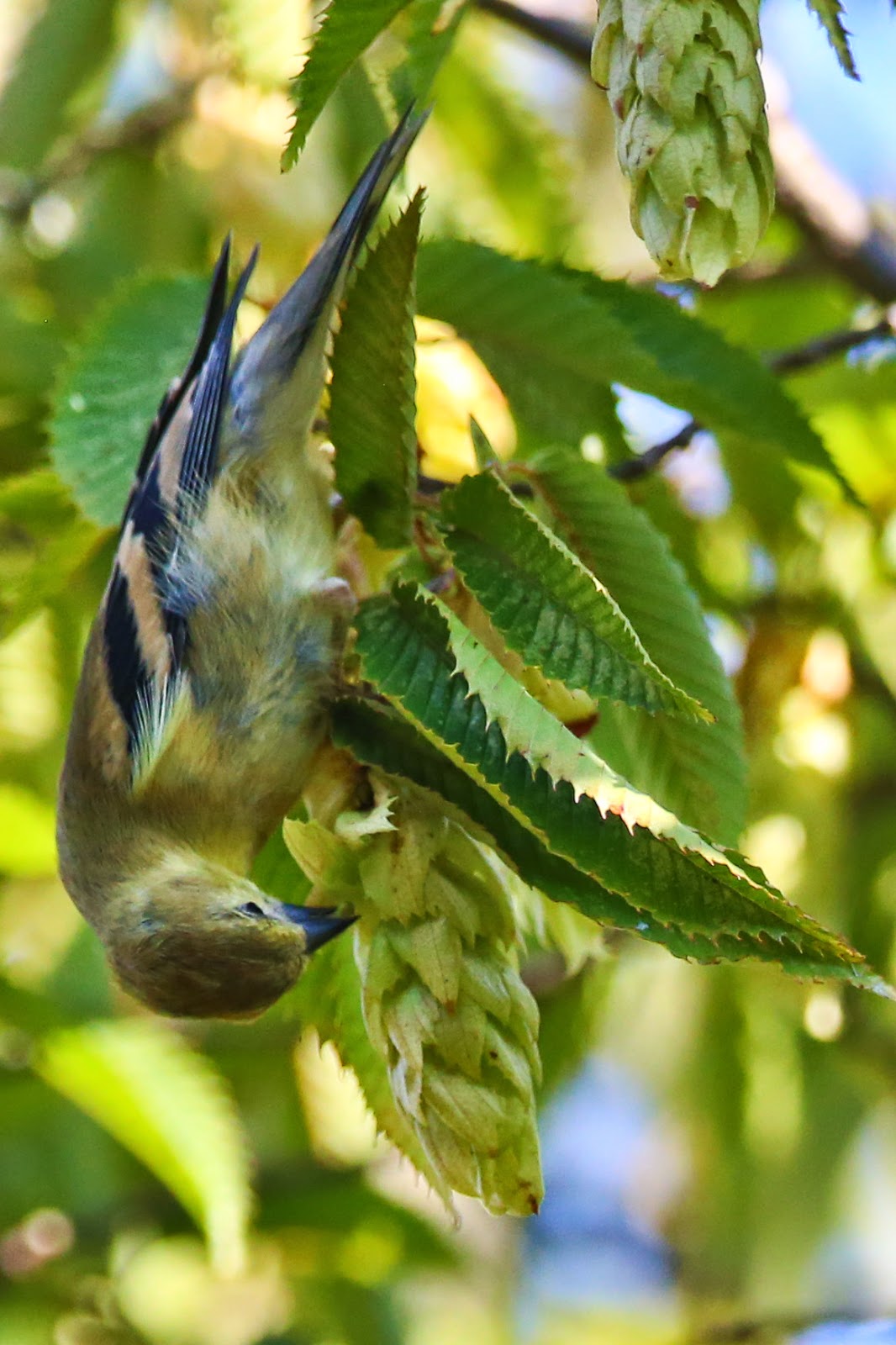 Closer to the southwest bridge to Foster Island the Goldfinches have been feeding on the seeds of the Hop Hornbeam's for almost a month. 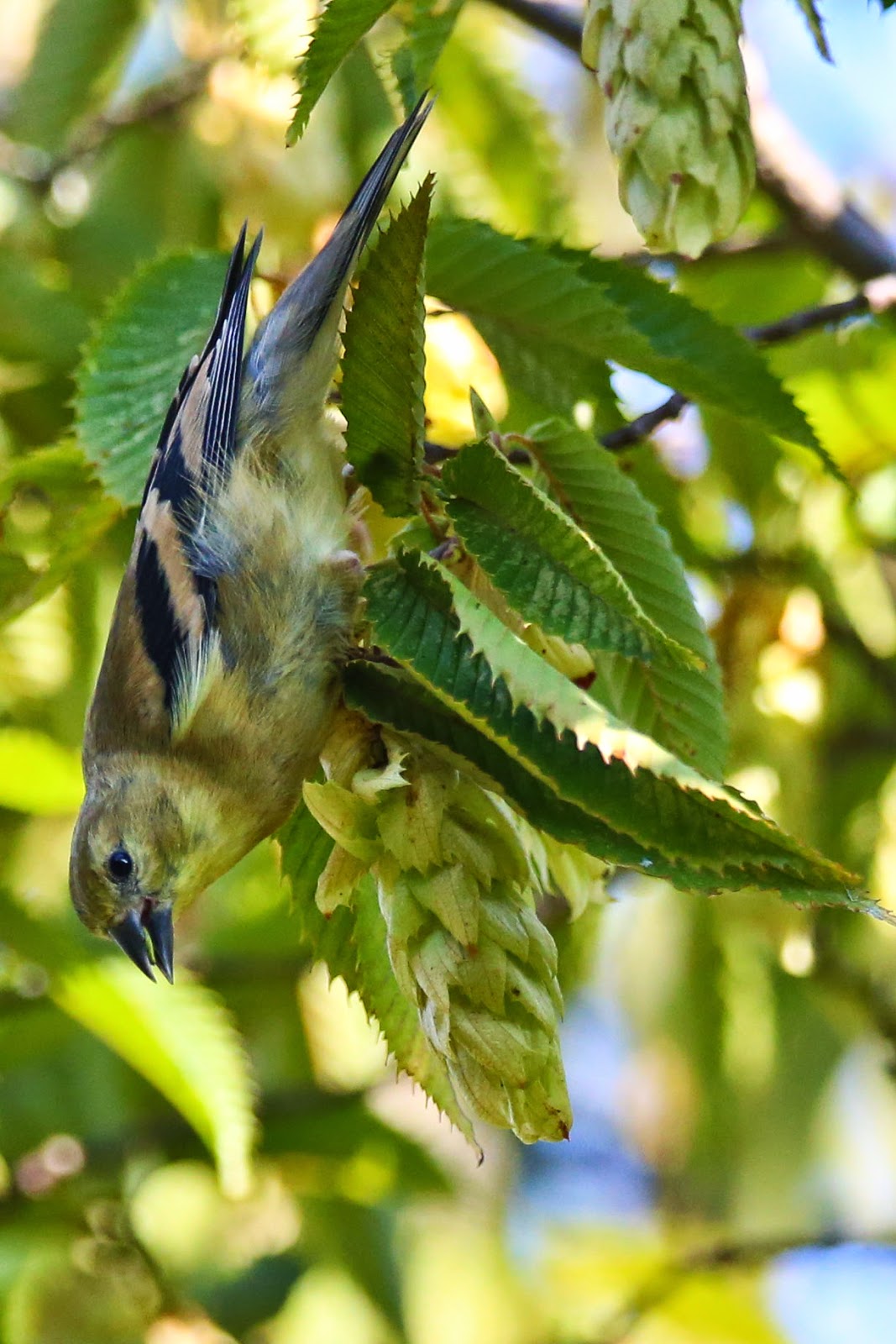 The fact that the trees are not native to western North America seems to make no difference to the finches. 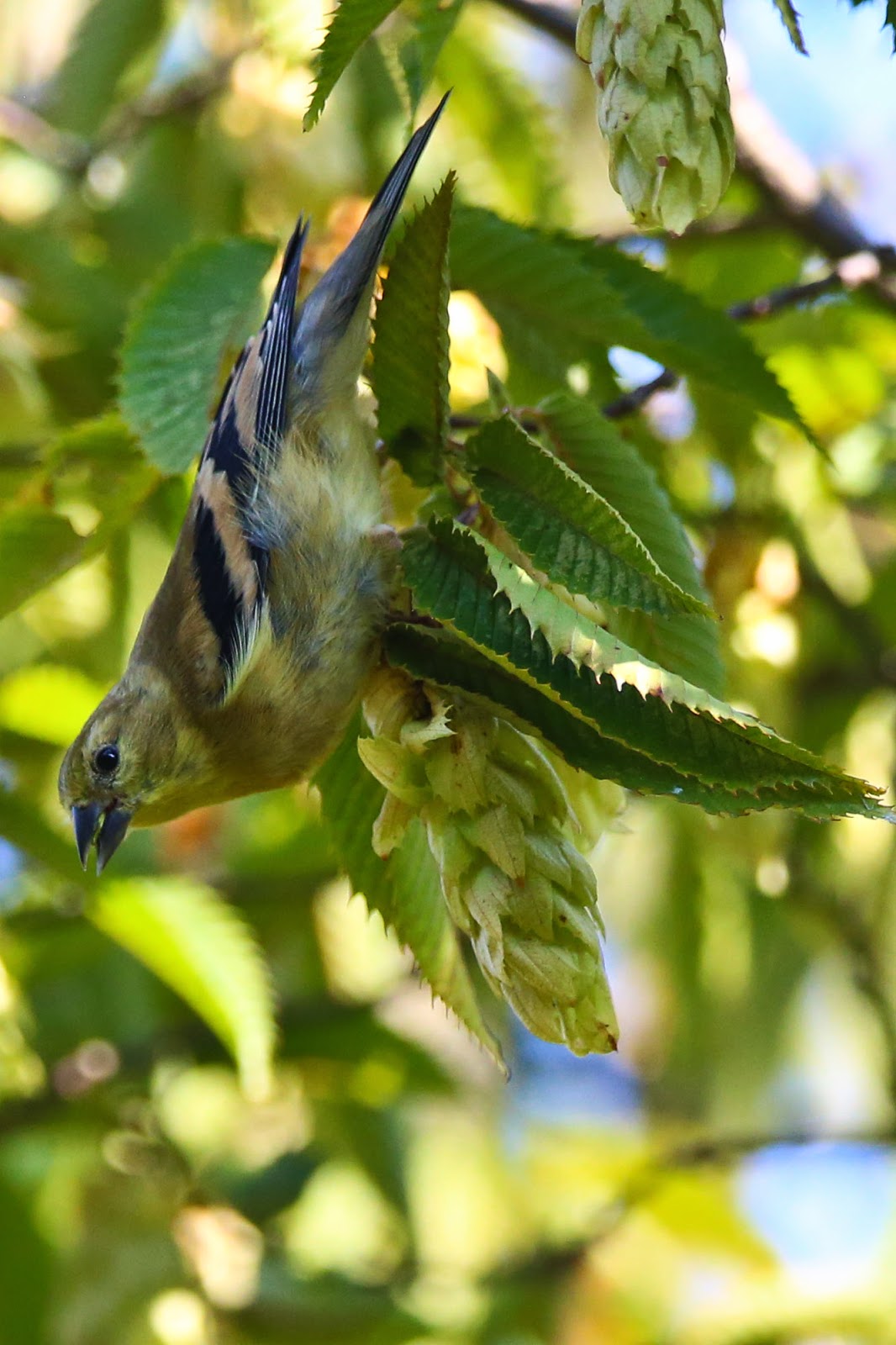 While their yellow color is no longer at its peak it does seem funny that dozens, if not hundreds, of these birds can be feeding, unnoticed, while folks walk and run right beneath them. 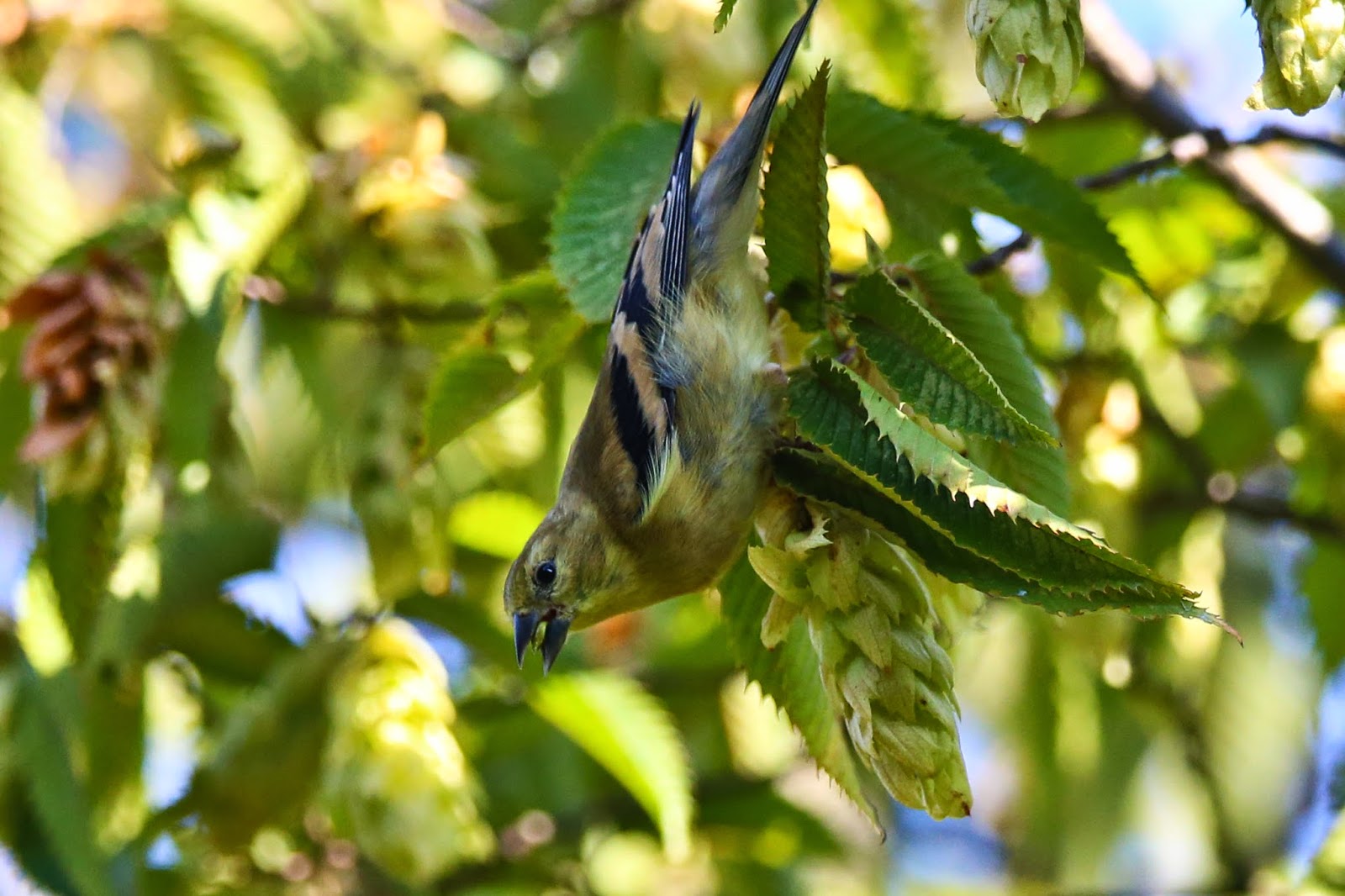 Generally the birds are very quiet and its only their rustling of the leaves that give them away. However occasionally, when they are startled by a person or a dog, they begin softly twittering as they swiftly switch to a more distant tree. You can play the sound of their twittering at the Cornell Lab of Ornithology.

This time of year as the young birds mature, and the parents are no longer running to and fro while feeding their young, the birds can be harder to see. But if patient and observant there is still plenty to see, particularly when we watch for what and where they are feeding.

By the way I have started seeing Green-Winged Teals again in the last month and yesterday I noticed a pair of Northern Shovelers. It has been a couple of weeks since I last saw any Osprey. They were actually sitting on the 520 light poles often used by the eagles Eva and Albert. As I watched they lifted off and began circling higher and higher. They may have been preparing for the migration to Central or South America.

Speaking of the eagles, Eva and Albert should be returning any day now. If you would like a challenge it might be fun to see who notices that the eagles have returned first. Feel free to post your sightings and their location in the comments at the end of this post. 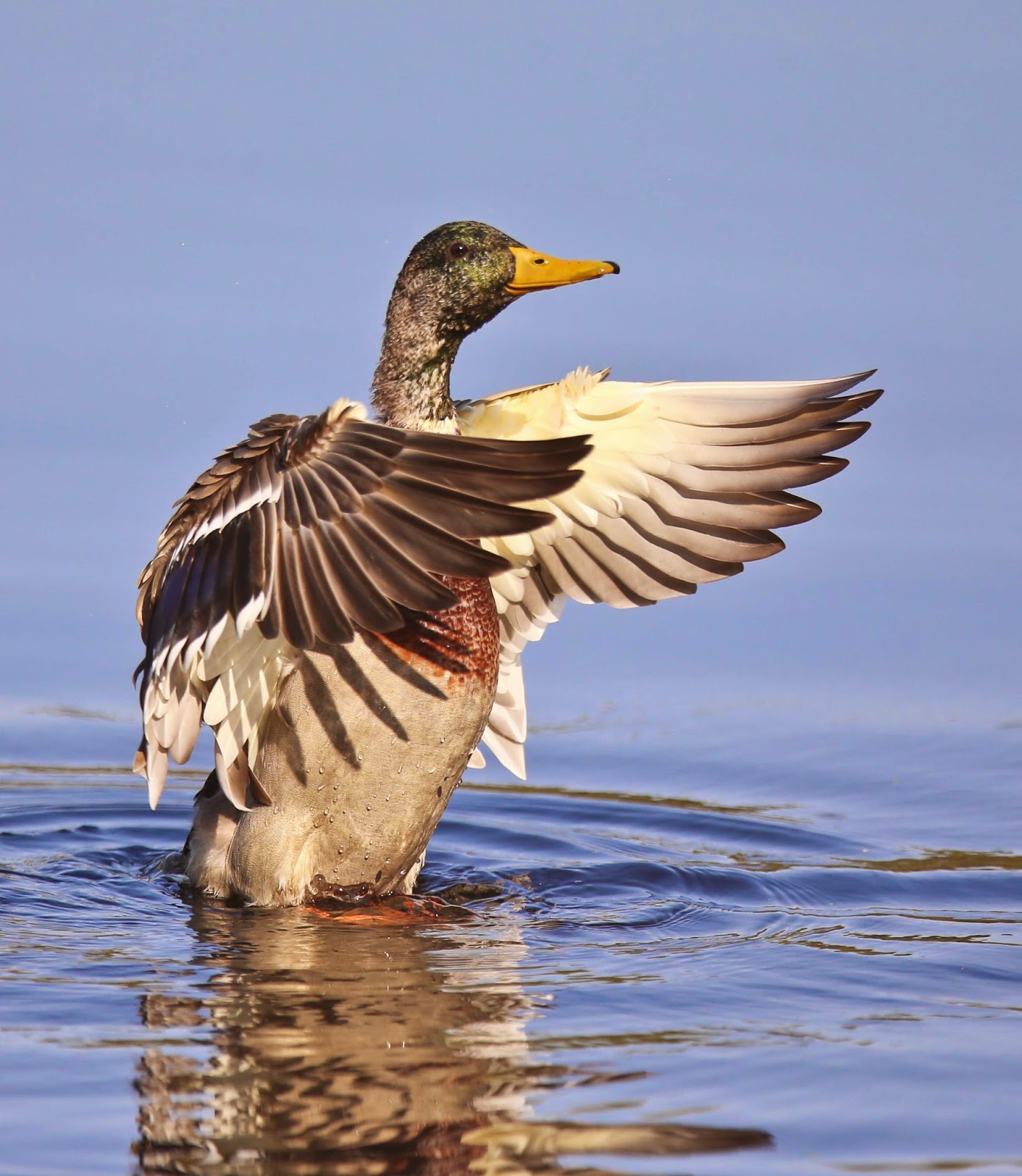 The heads of the male Mallards are turning ever more green. Regardless of how warm the weather is this weekend the birds are letting us know that fall is on its way.

No matter how hard I looked I could not find what this female Mallard was watching for in the top of a cottonwood tree next to Duck Bay. Survival is apparently a strong motivator for one's powers of observation.