The Mystery of Great Expectations 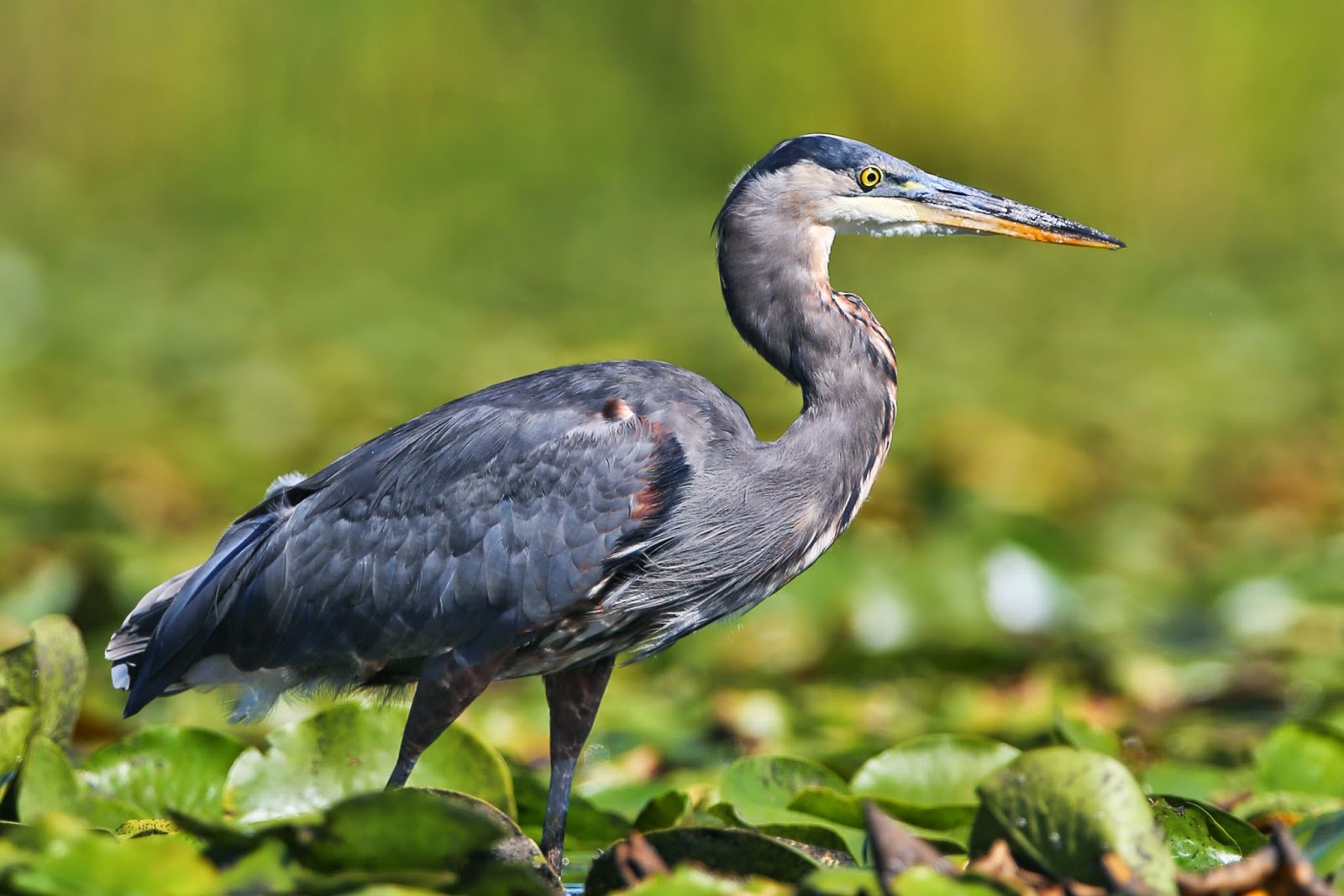 The Great Blue Heron is the official bird of Seattle. You can read more facts about the Great Blue Heron on the Seattle Audobon site and at the Cornell Lab of Ornithology. This heron was seen yesterday stalking about among the lily pads just south of 520. One of the questions that came to mind was how old is this heron?

On the Audobon site it says it takes about six weeks for a heron chick to reach the size of an adult. From experience, they spend most of that time in the nest so we are unlikely to see miniature versions of Great Blue Herons wading about Union Bay. None the less, if you watch you can sometimes pick out young herons by their behavior. They have been seen stalking about the shallows, striking near the water's surface but only coming up with inanimate objects. 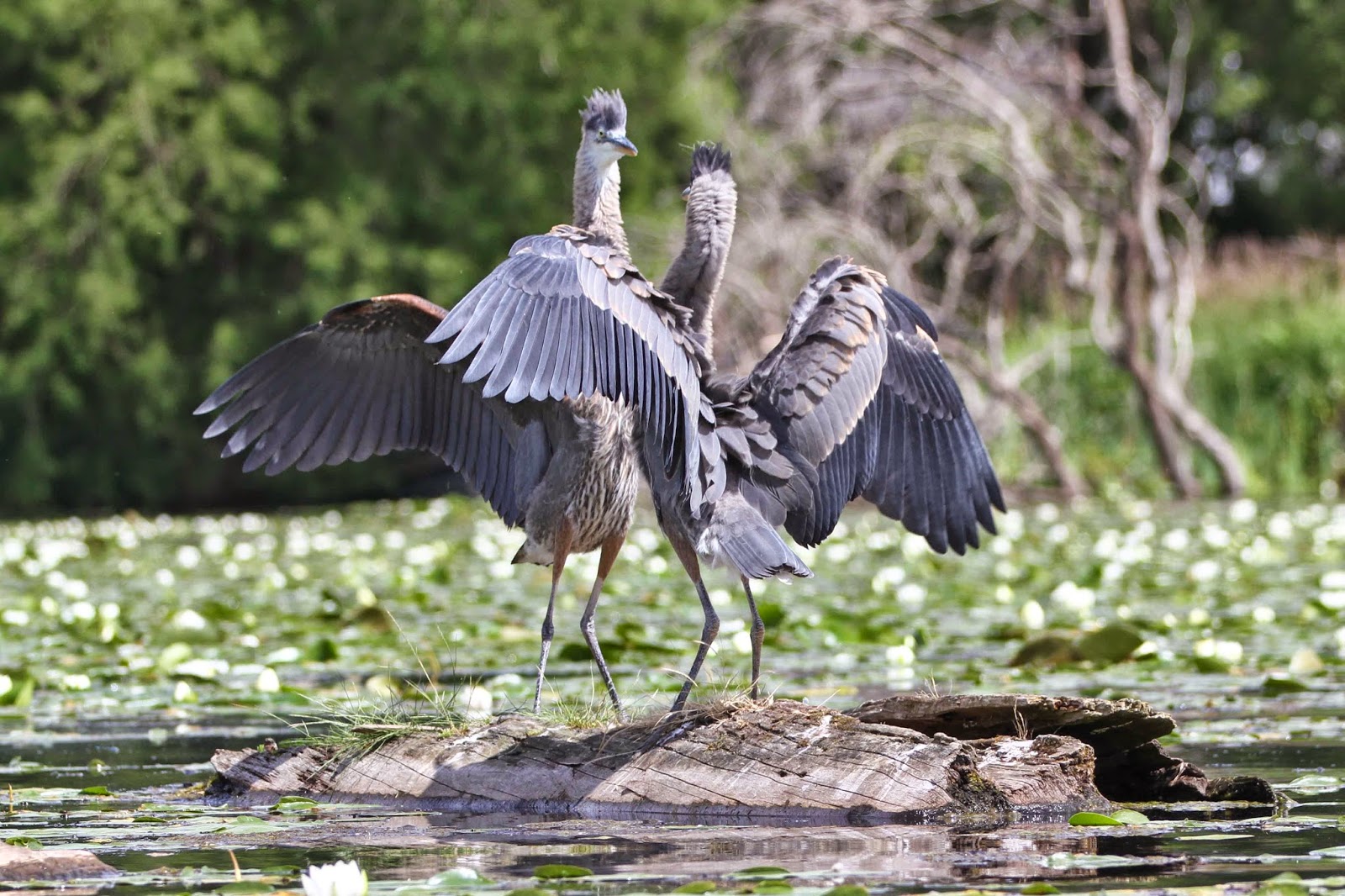 In another odd example, from a couple of years ago, these two young heron appear to be having a jousting match. Evidently part of growing into a mature heron is learning how to intimidate and impress. It is also interesting to note that there is no dark plume hanging down from the back of the head on these young herons. 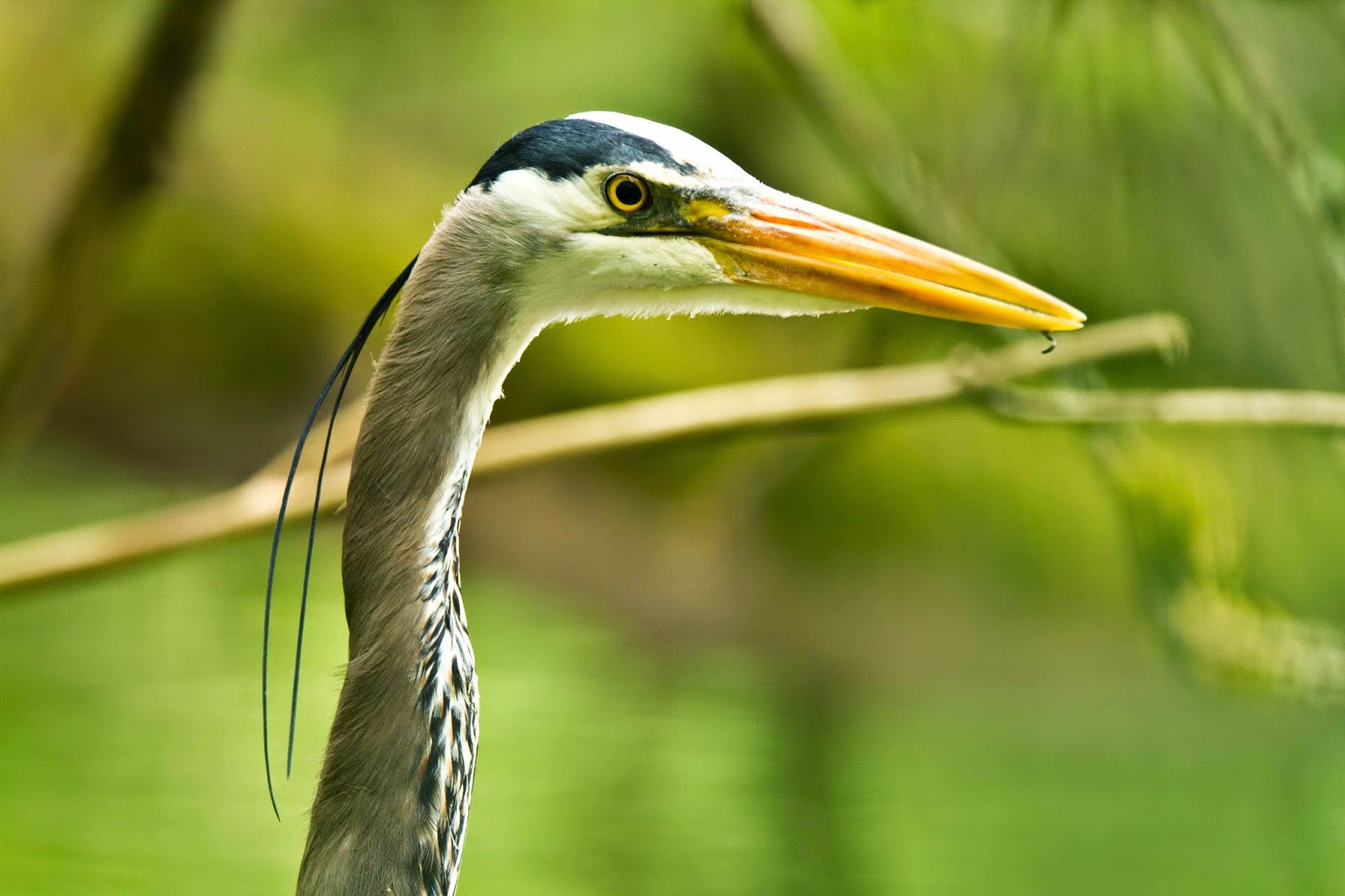 This photo, also from 2012, shows a great example of a long dark plume. Neither Cornell or Audobon mention the length of the plume as an indicator of age. The closest thing to a comment on this is from "The Sibley Field Guide to Birds of Western North America". Sibley shows the painting of an adult Great Blue with a black plume and one of the juvenile without a plume. It also shows the juvenile as having a dark crown and the adult as having a white stripe on top of the head. The two photos above show both of these corresponding differences as well. 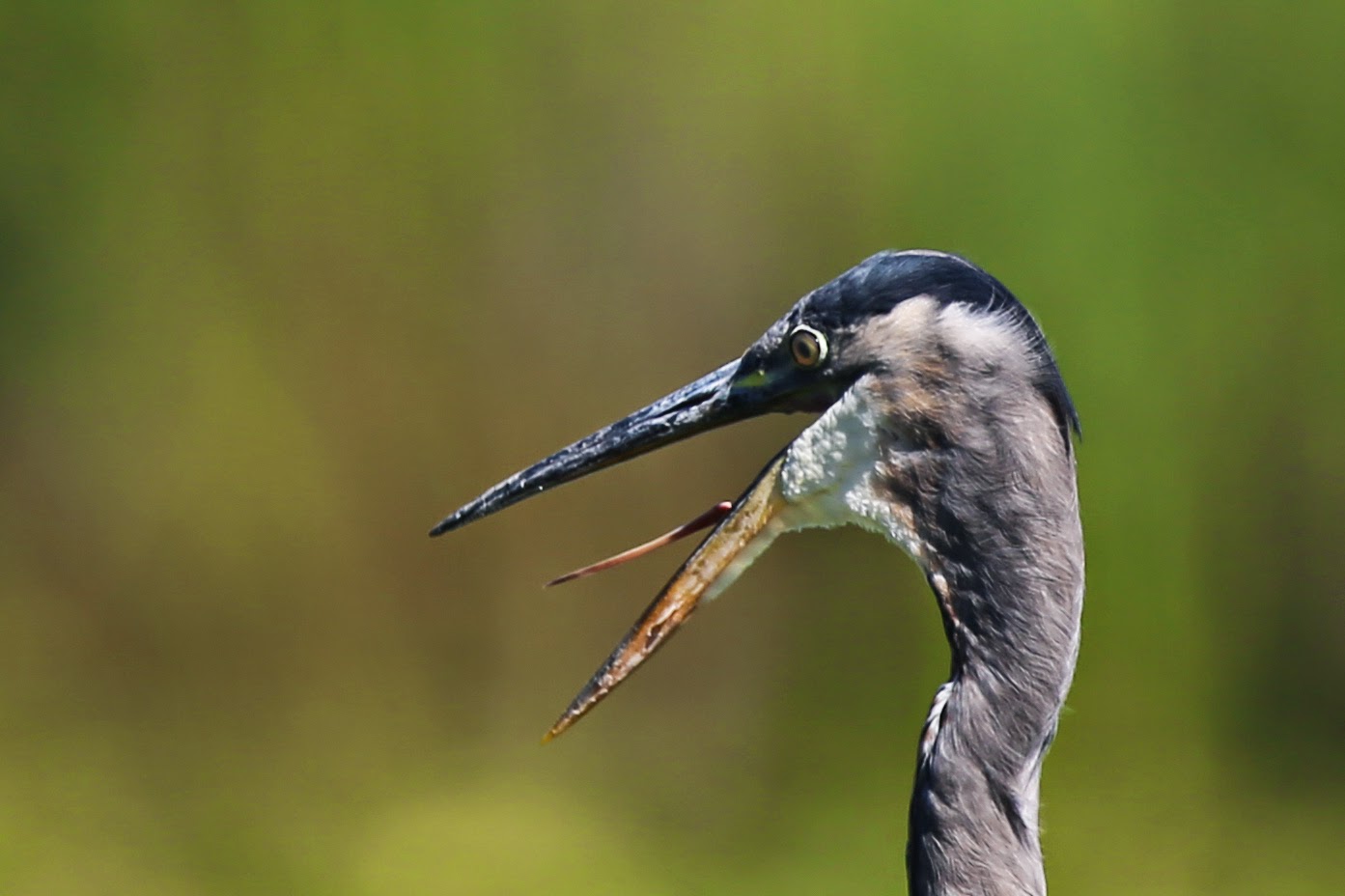 So what do we see when we look closely at yesterday's bird? We see the hint of a plume and the start of a white stripe that makes one think this might be a fairly young bird. The skinny little tongue does not appear to have any relationship to age but it is kind of fun to see. 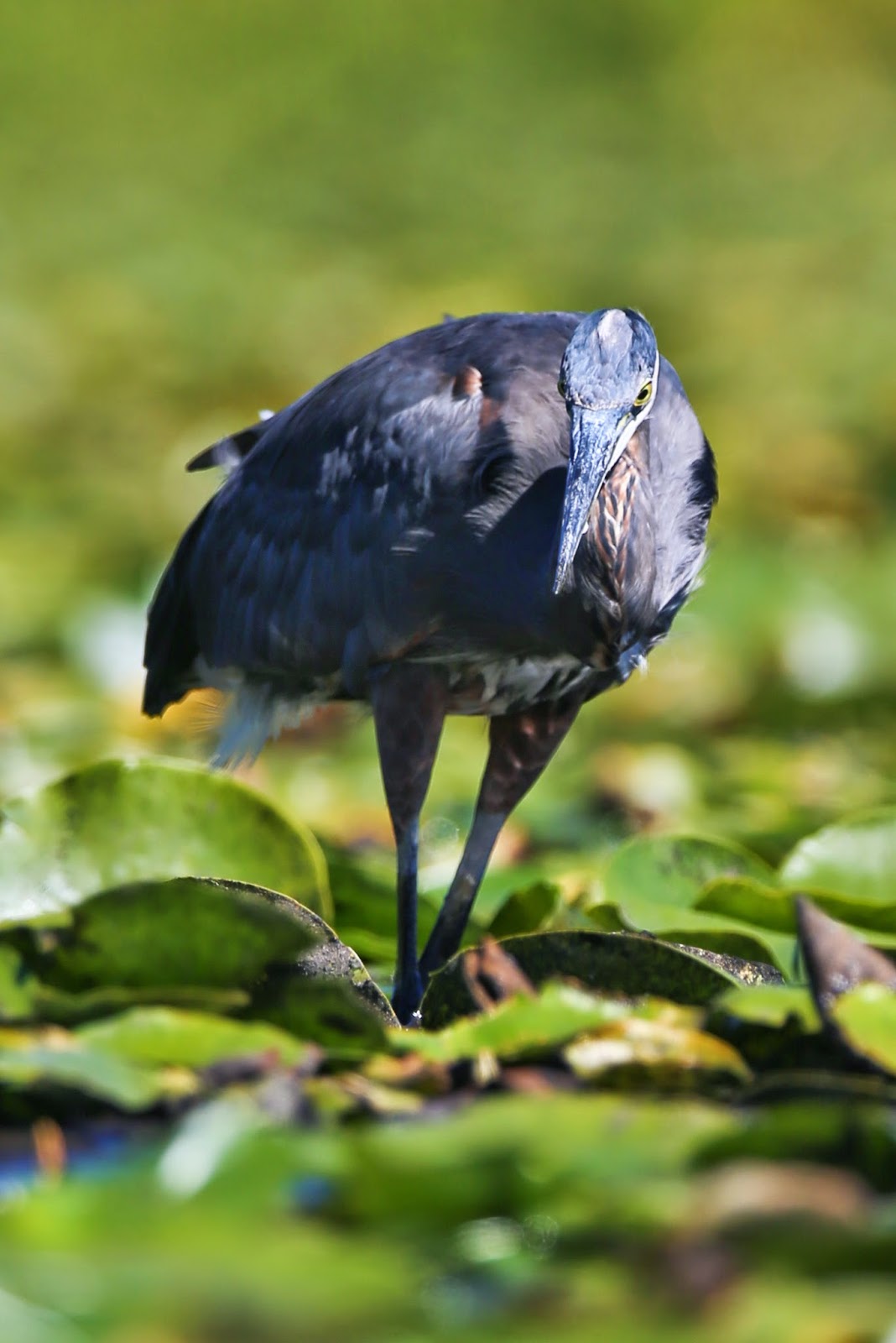 Lets take a look at the behavior of this heron to see if it tells us anything about its age. 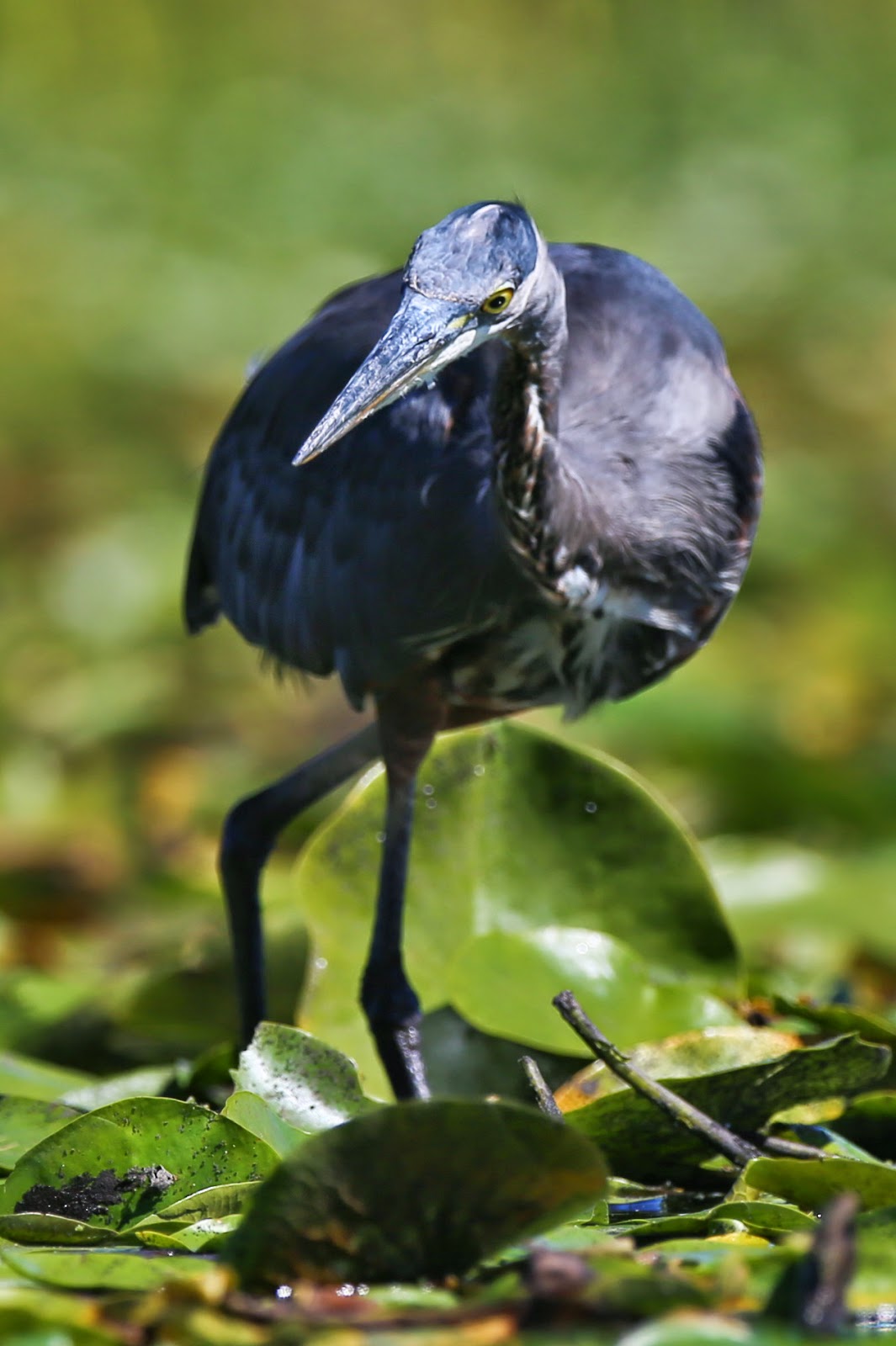 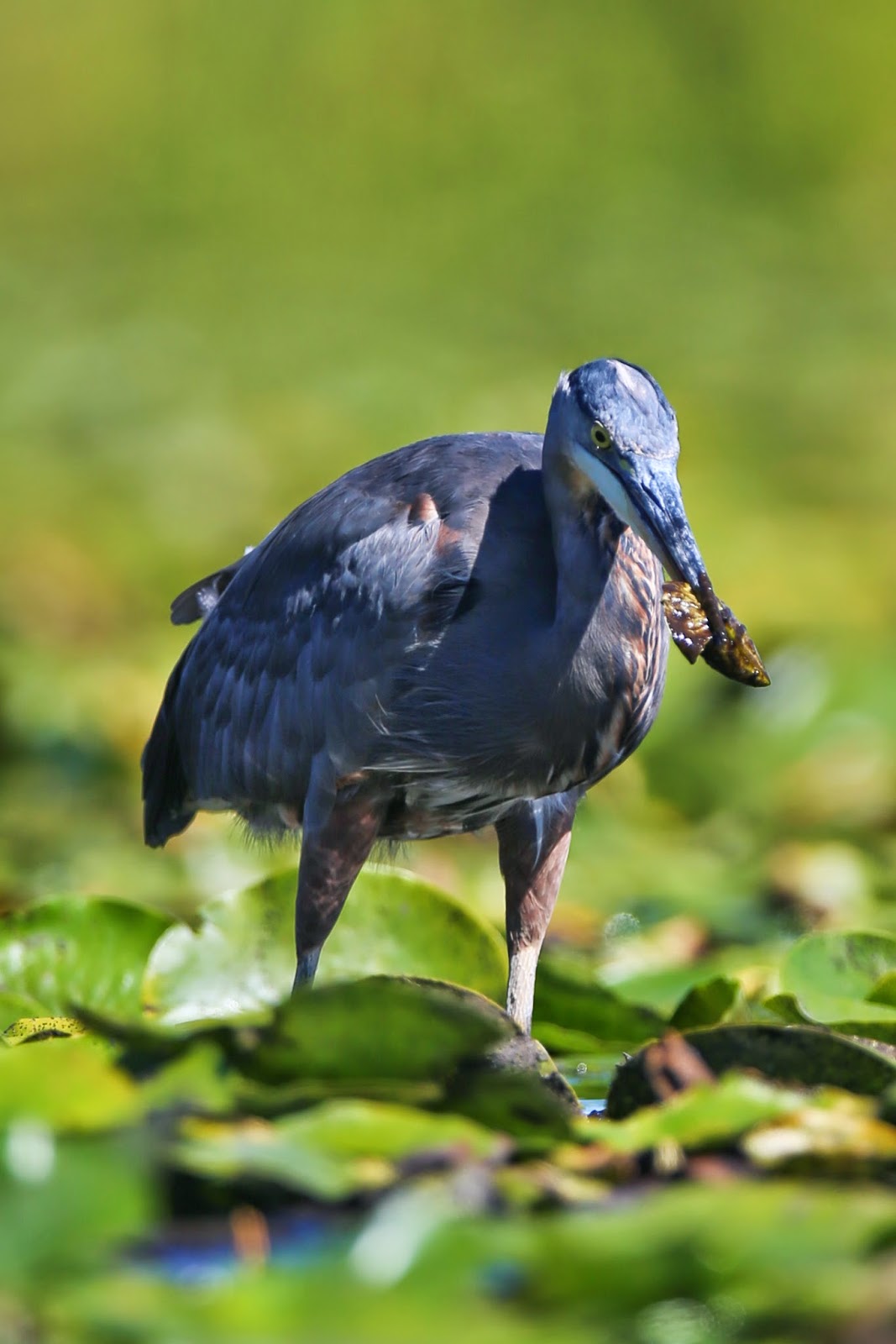 However coming up with a piece of a leaf does not look like adult behavior. 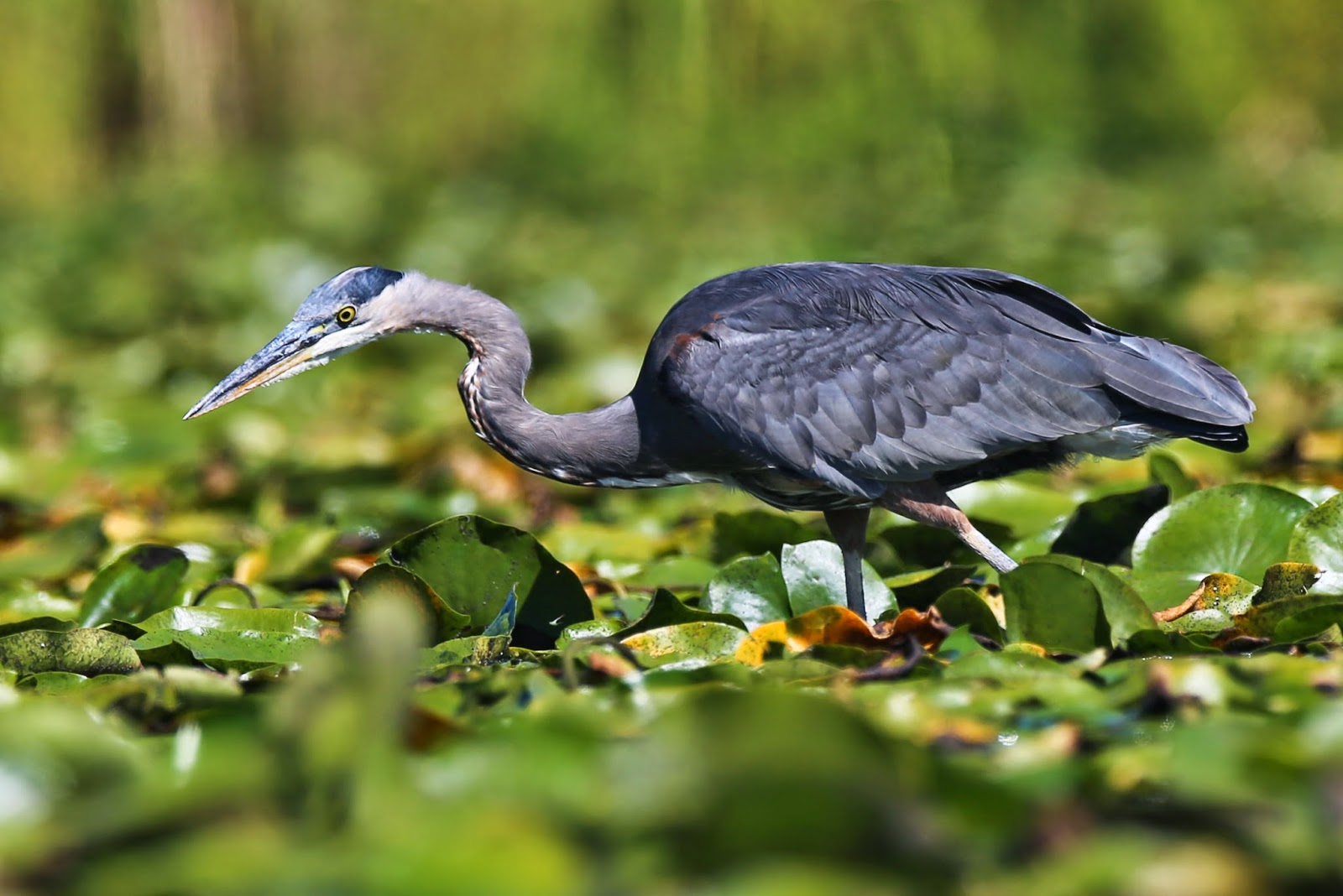 Undiscouraged, the heron returns to the hunt. 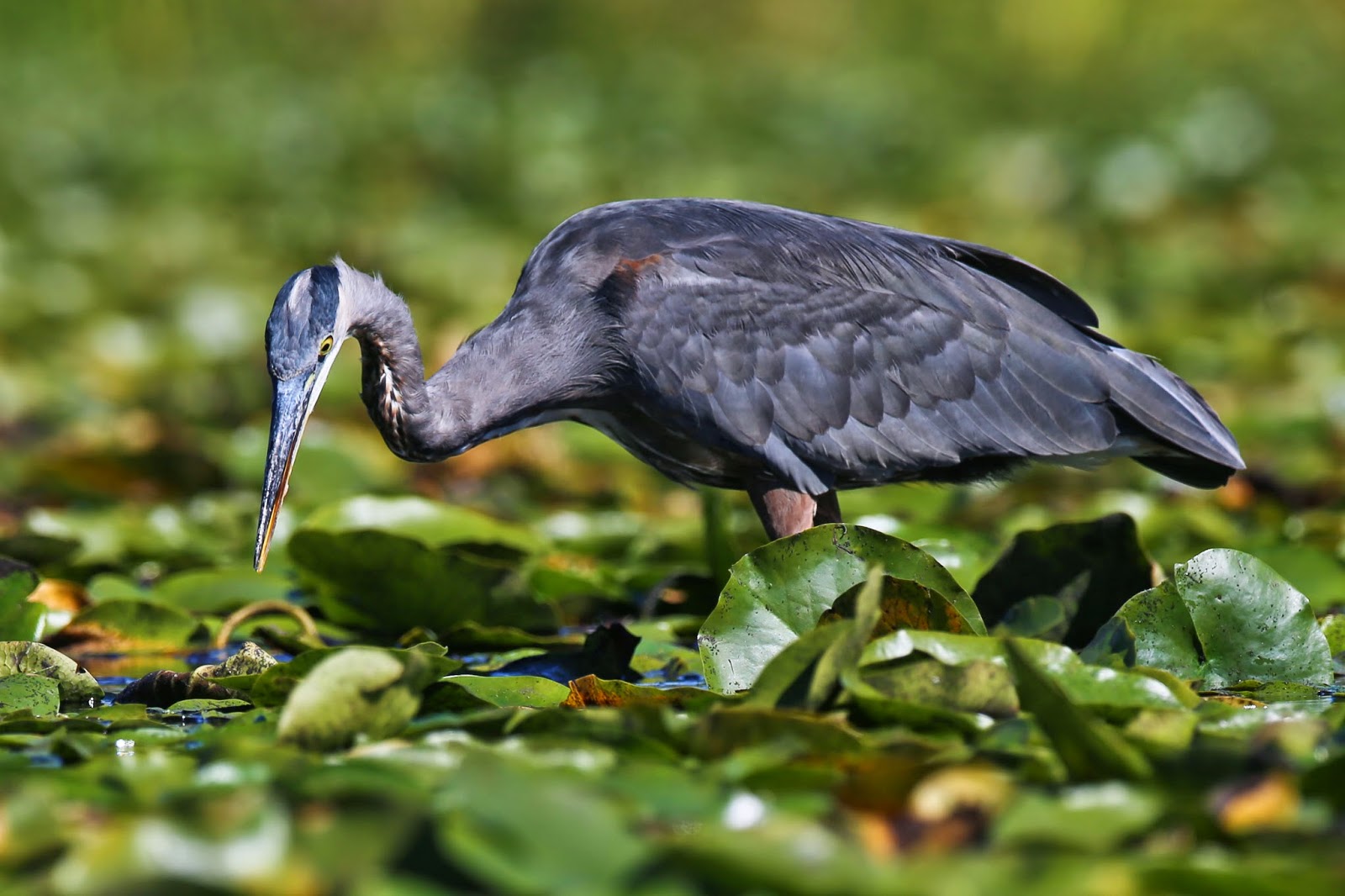 Something moves below the surface. 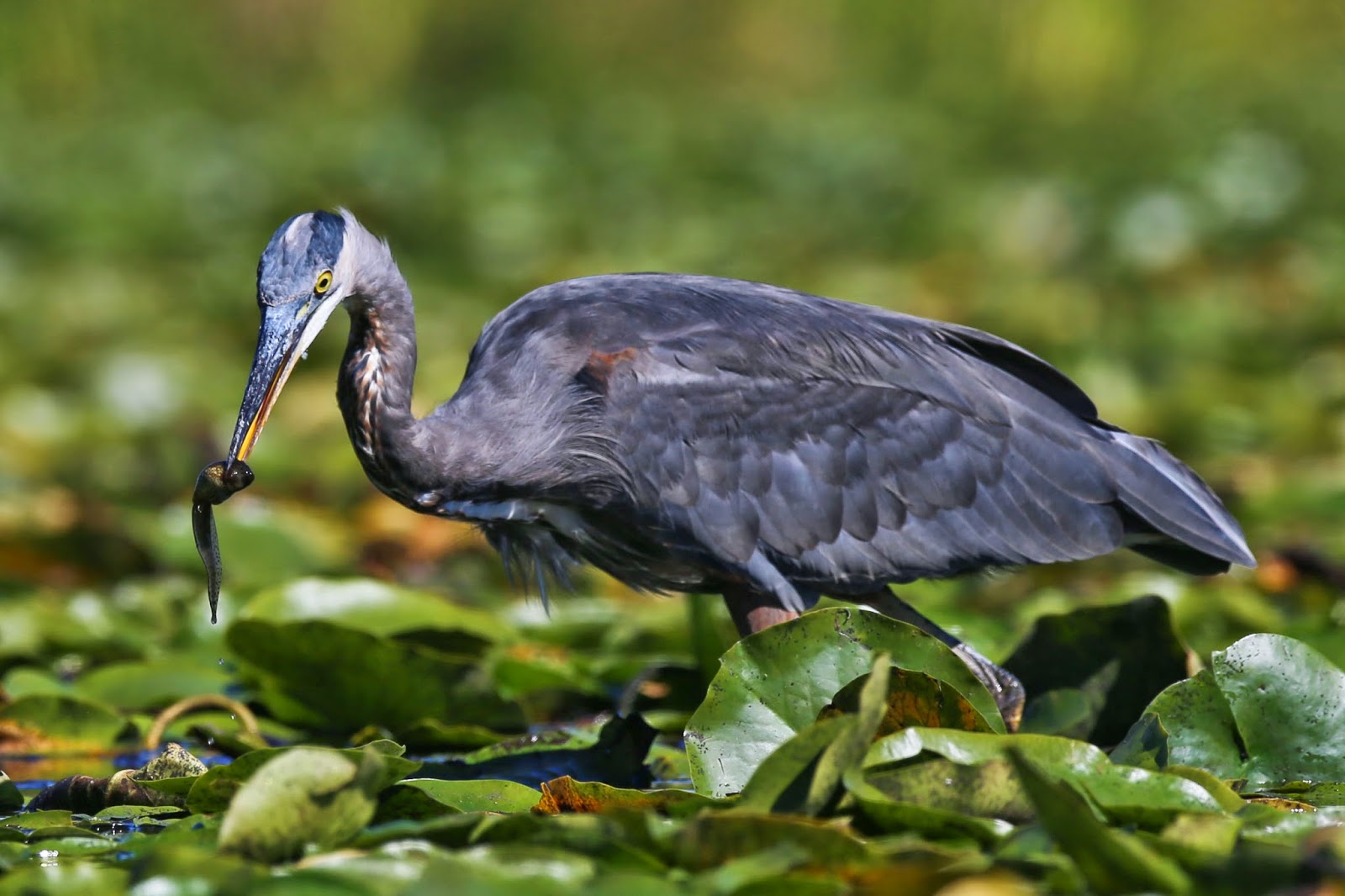 Success! The heron strikes and comes up with a tadpole. 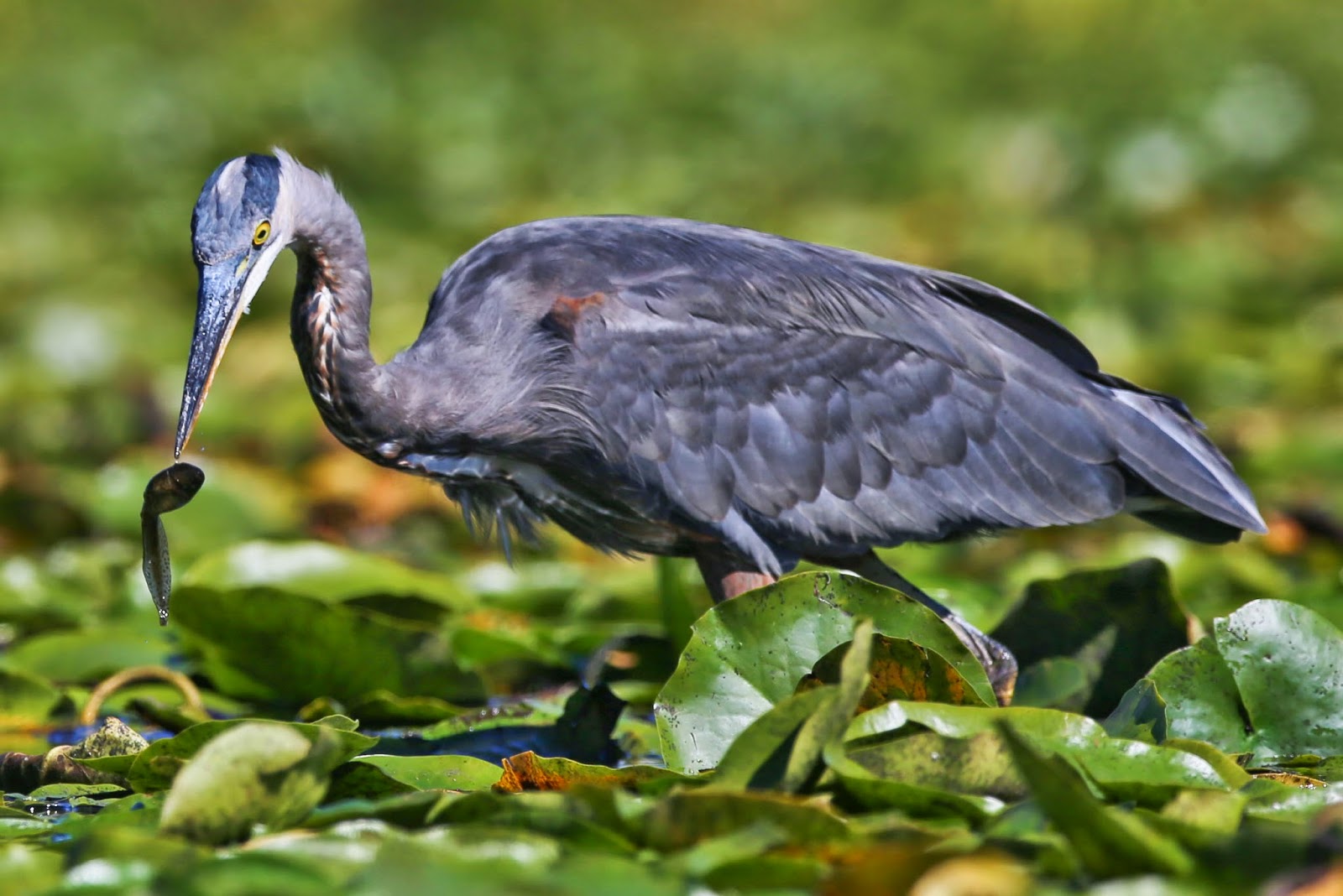 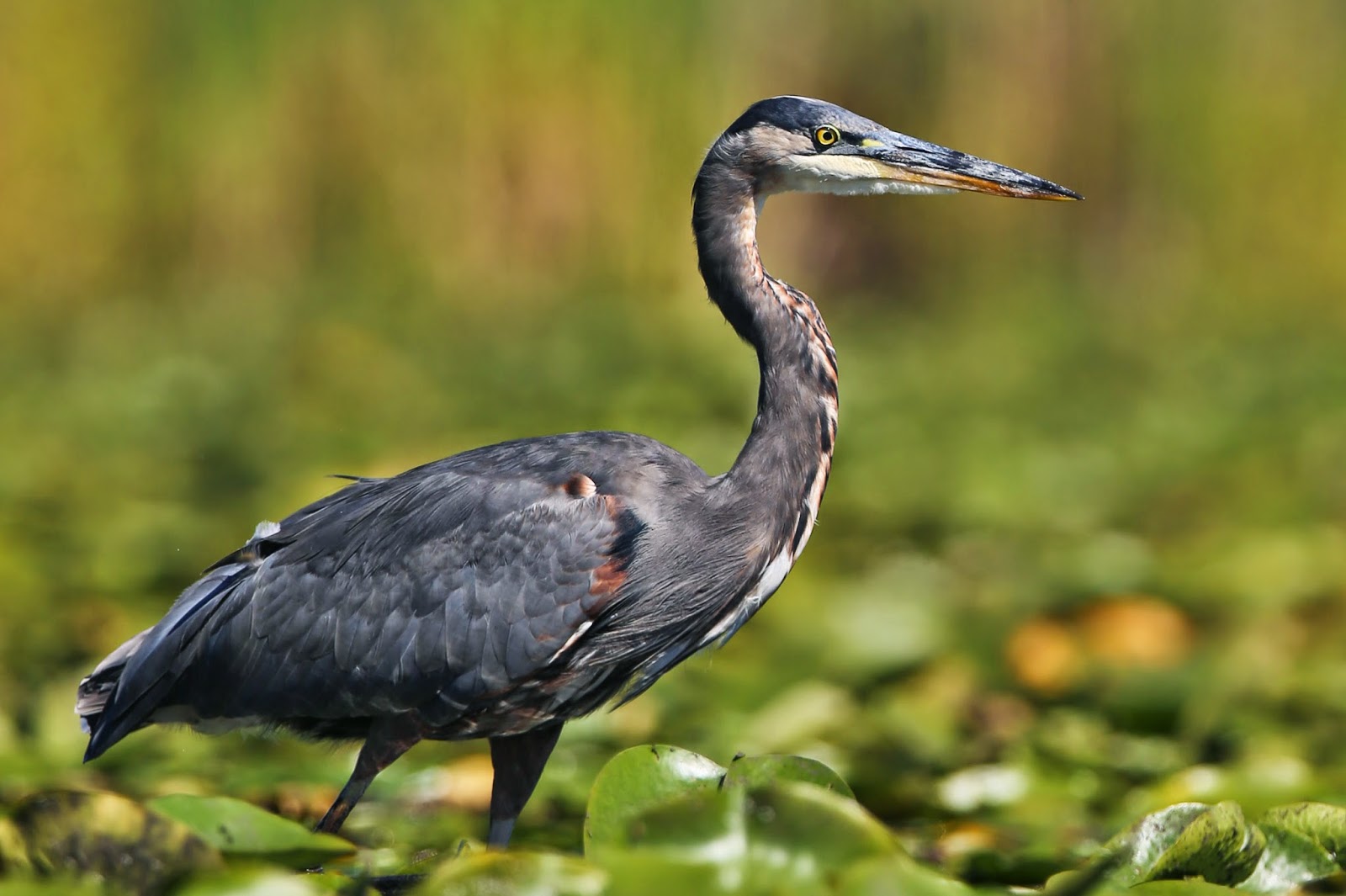 This same thing happened twice and in neither case did the heron eat the tadpole. Hopefully this apparently young bird finds food that meets its great expectations. 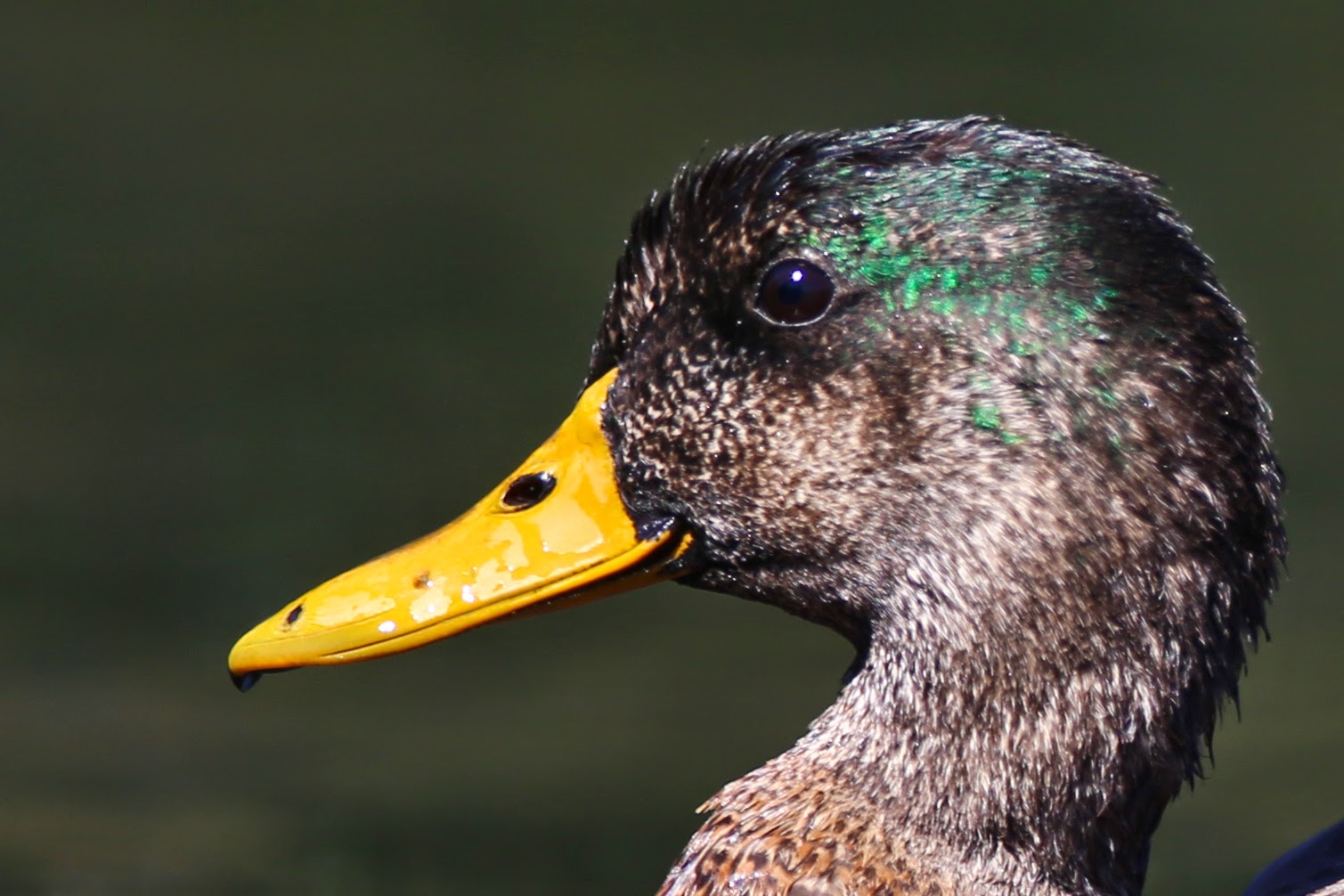 Another bird, seen yesterday, with great expectations is this male mallard. He is expecting to have bright green feathers spread from a few speckled representatives to a solid mass about his head. It is interesting to note how his beak has already turned bright yellow. 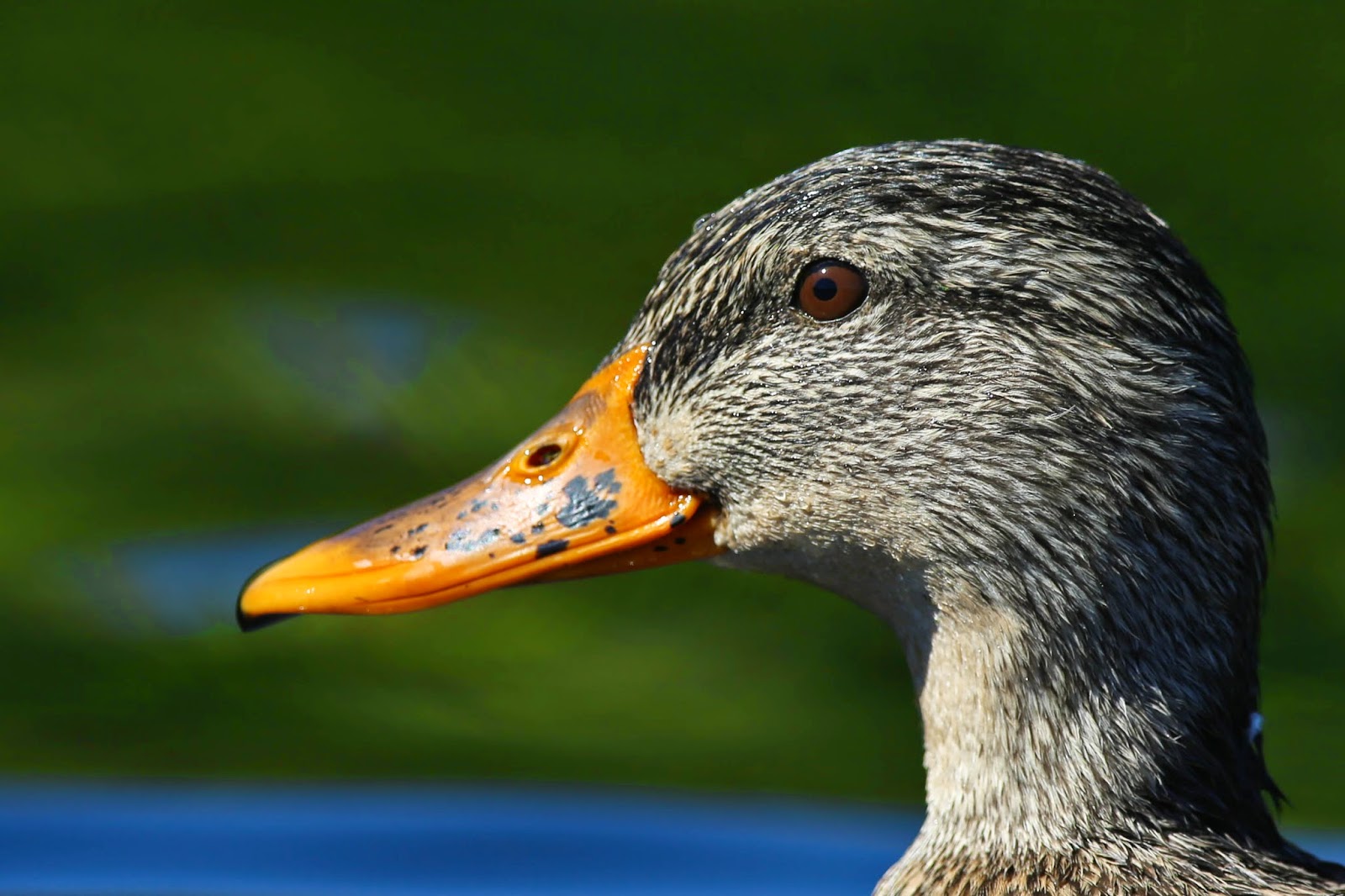 Not too long ago the male looked a lot like this female but his fall colors are clearly on the way. Isn't the difference in their beak colors interesting? 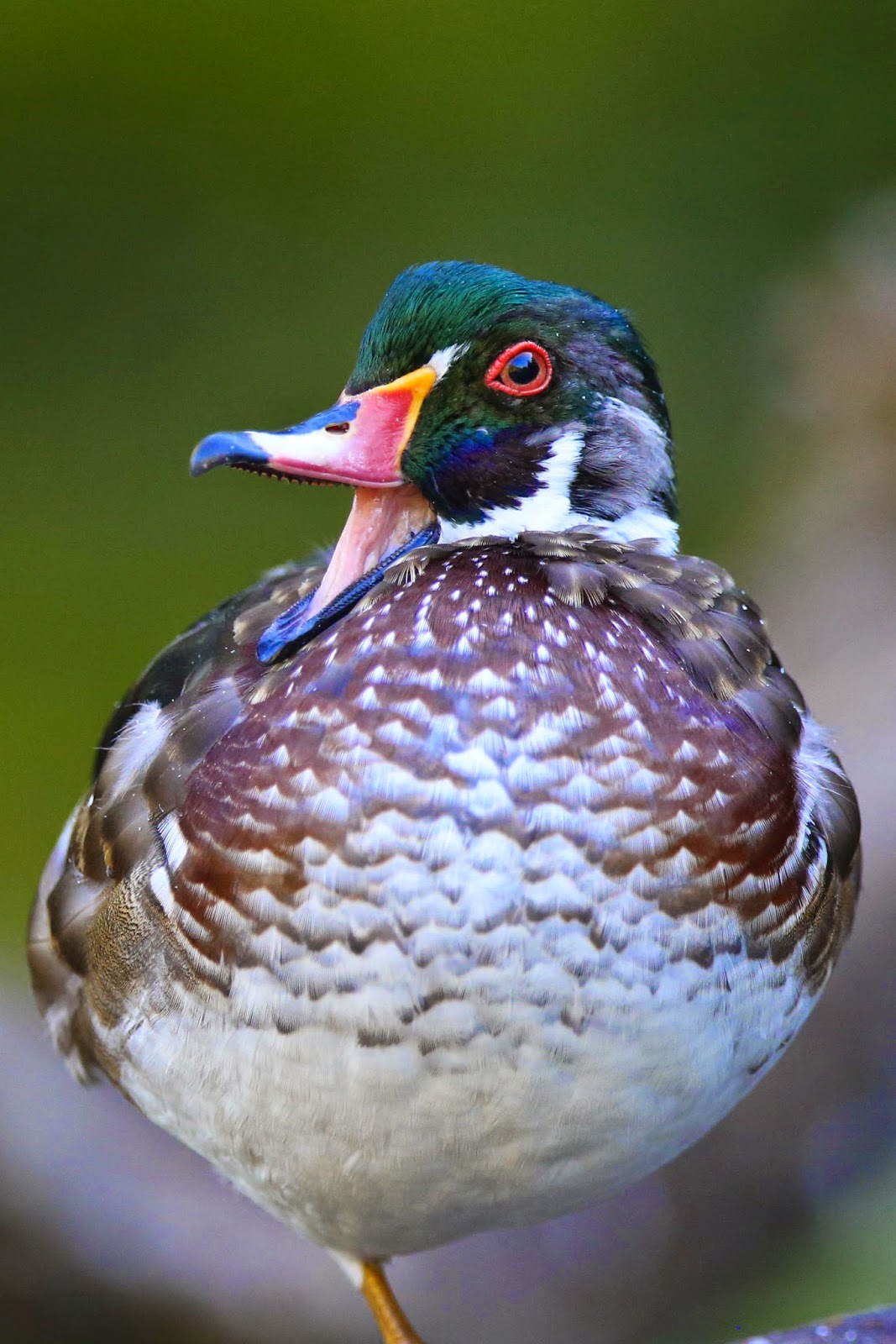 This Wood Duck is a bit further along with his fall colors but there are still a lot of young male Wood Ducks out there with far less color. 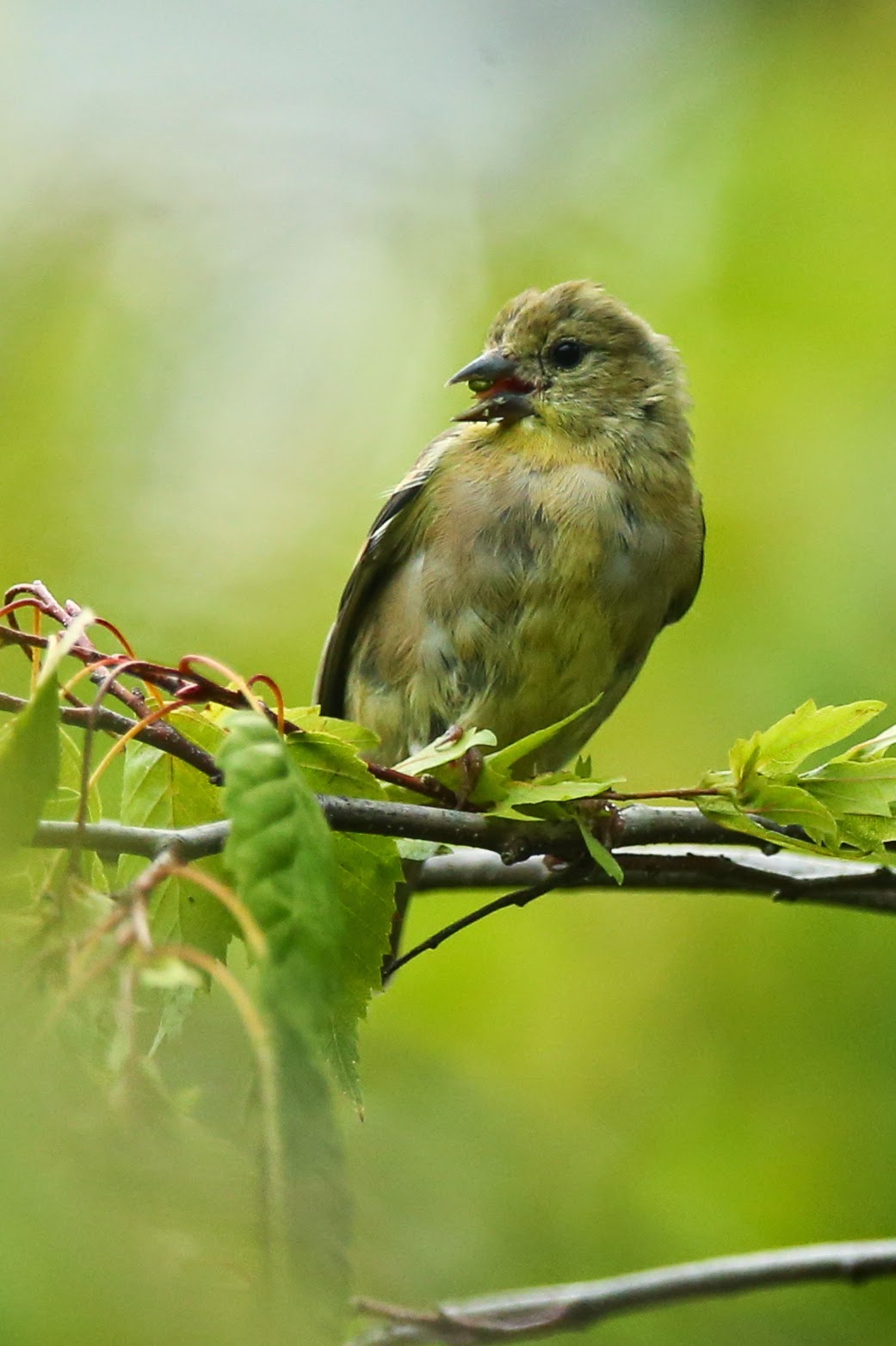 This Goldfinch is lowering its expectations as its yellow breeding color is fading away. 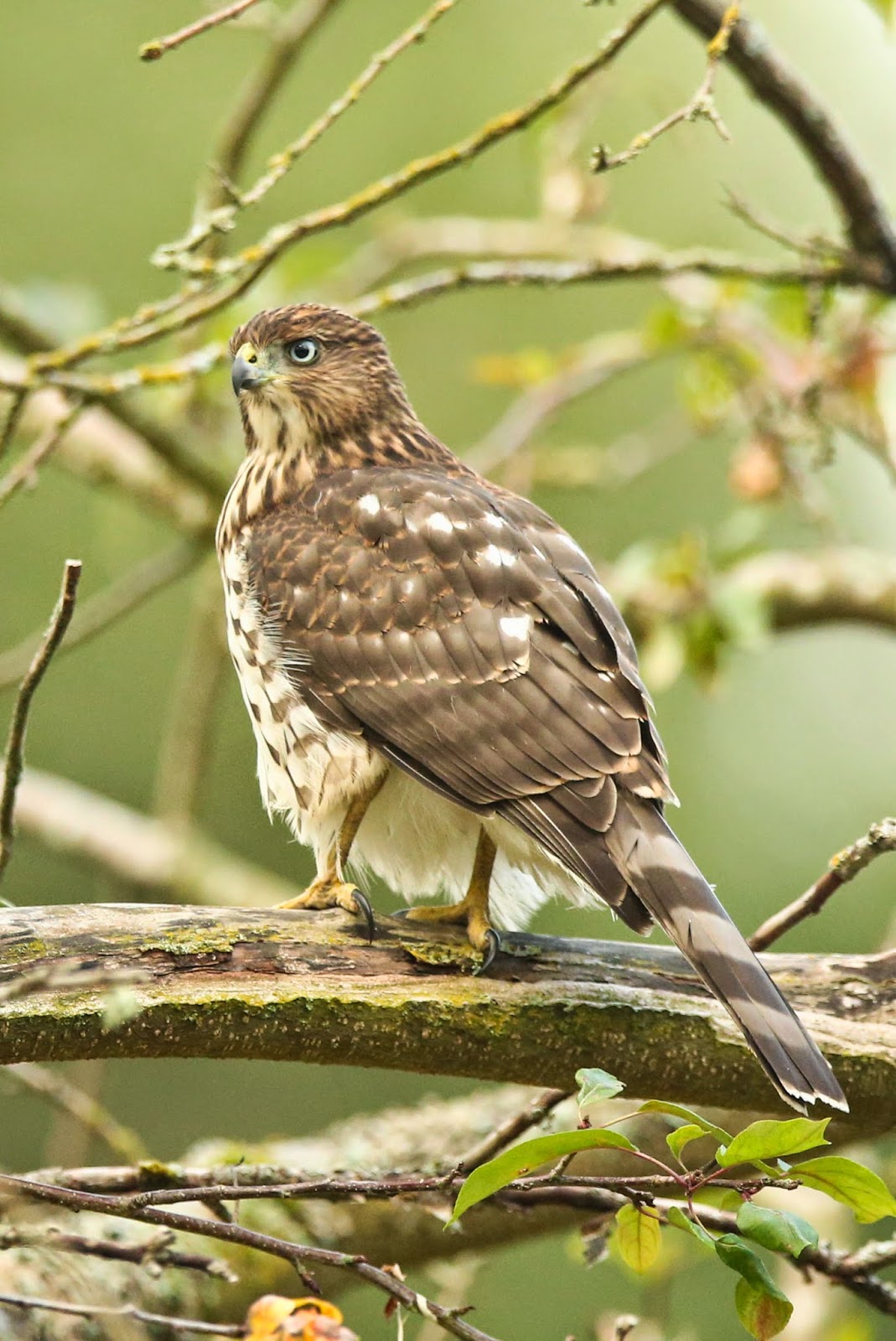 Last week this hawk was spotted on the WSDOT peninsula, between Kingfisher Cove and Elderberry Island. 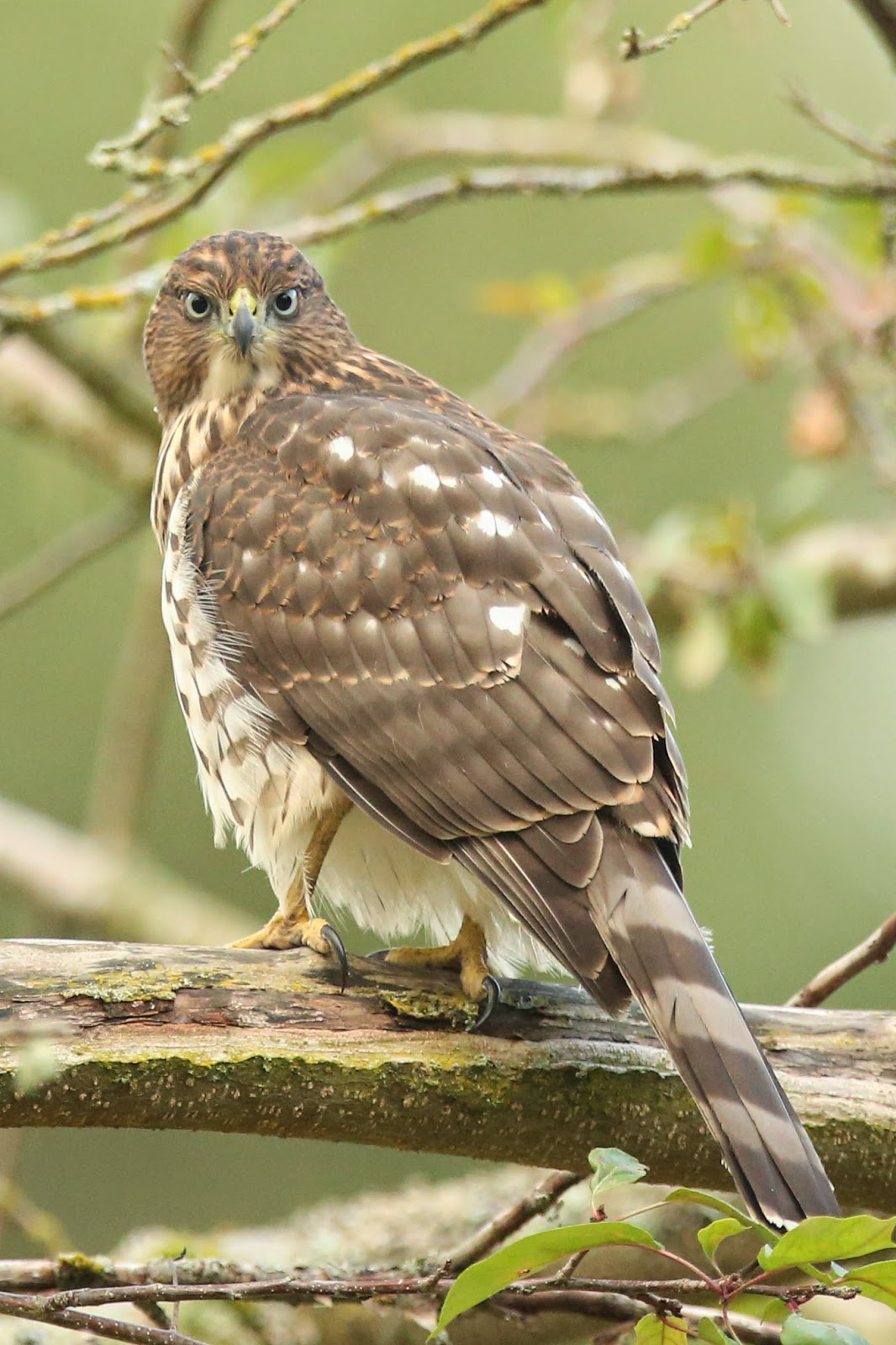 Given the thickness of the legs I suspect this is a juvenile Cooper's Hawk. 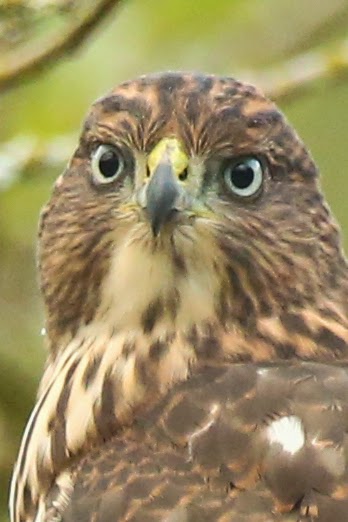 A closer inspection reveals something very curious about this bird. Do you see anything odd? 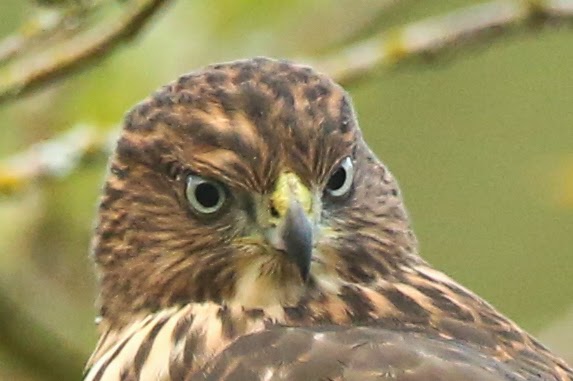 The photos of young Cooper's Hawks on the Cornell site show the eye color as yellow, as does The Sibley field guide. The mature birds have reddish-orange colored eyes. 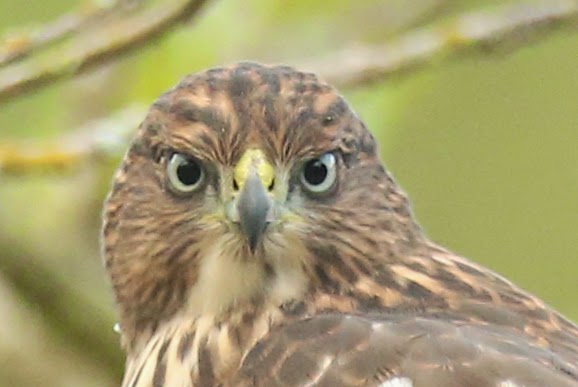 This bird clearly has a pale blue coloring to its eyes, particularly obvious when compared to the yellow lores behind the beak. Hopefully one of you can resolve the mystery of the Blue-Eyed Hawk.

Thank you to Dan Reiff, who writes,

"Very young Cooper's often have Gray-blue eye color. This bird has probably recently fledged. This eye color changes in a short period of time to those seen in field guides. Many have not seen this color, because they have most likely seen older juveniles and adults."