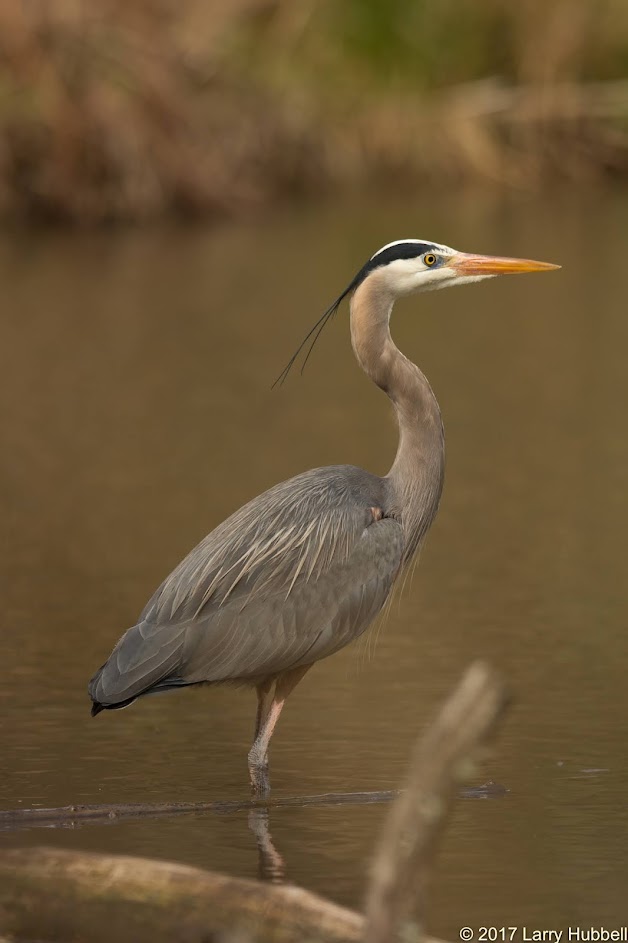 A Great Blue Heron is a magnificent creature. This late March photo shows an adult in its best breeding plumage  The long sharp bill is bright yellow. On the head, the contrast between the dark blue and the white is strikingly crisp. The dark plumes behind the head are nearly as long as the bill. The plumes on the back are relaxed and apparent but not on display. Those on the chest are mostly hidden due to the angle. 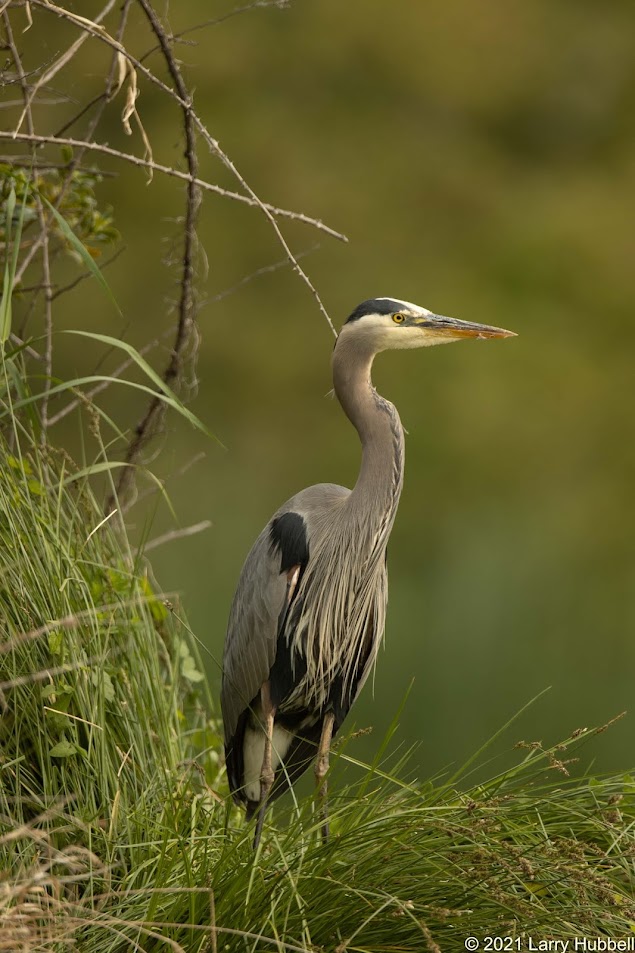 In this June photo, the plumes on the chest are more obvious. Less striking is the fact that this bird's bill has lost a lot of its yellow luster. The need to attract a mate has passed and most likely this bird was focused on finding food to feed its young. 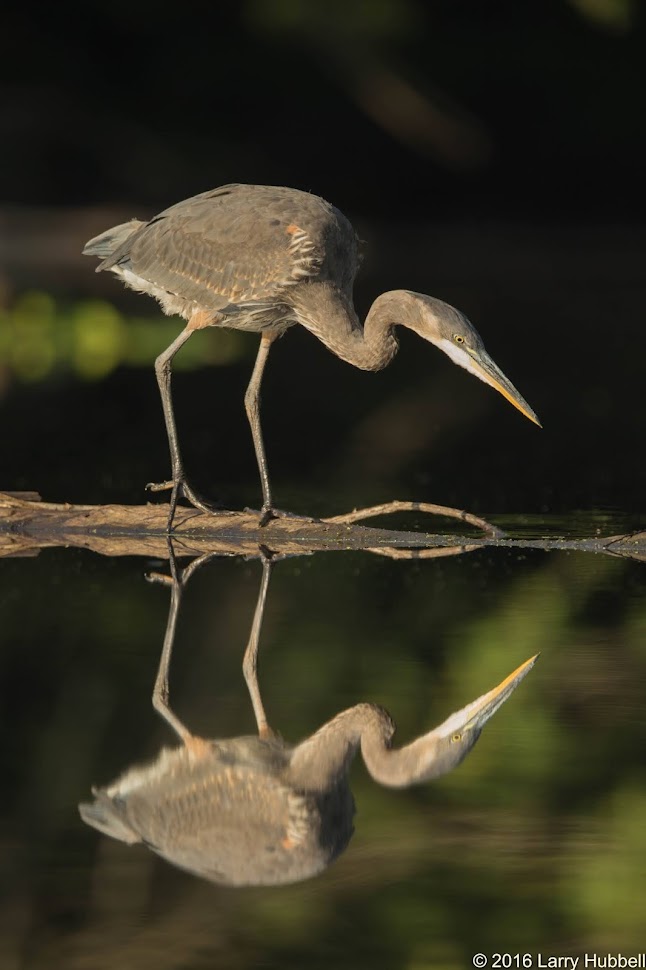 In this August photo, we see a juvenile bird that is significantly different from an adult. For example, the top of the head is grey and lacks the vivid contrasting stripes we saw in the adults. 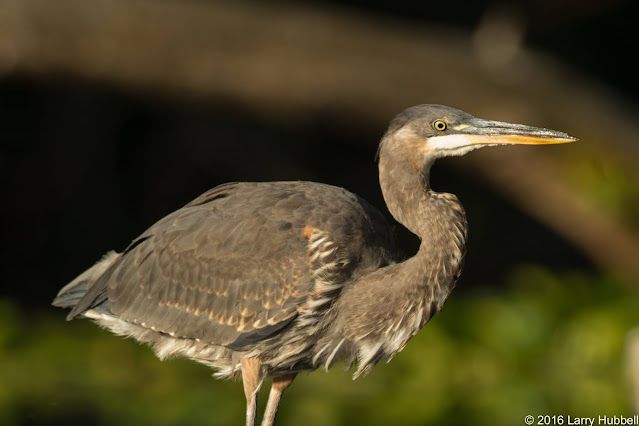 On the body and neck, we see tufts of white feathering, some of which it is probably losing as it molts toward maturity. Slightly less obvious signs of youth are the rusty-pinkish tips to the wing coverts displayed along the bird's side. The side of the neck is somewhat mottled and there may be just a tiny hint of ornamental plumes on the back of the head. There are no obvious plumes on the body. Although, some of the loose-looking white feathers, on the chest or lower neck, might be plumes just beginning to grow. 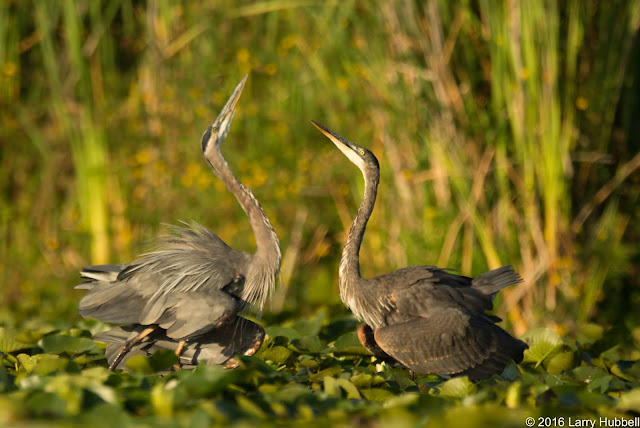 Here is an August comparison that shows two herons practicing a breeding dance. The bird on the left is holding up its nearly adult-like plumes on its back and chest while the more immature bird on the right is probably wishing it had plumes to display. 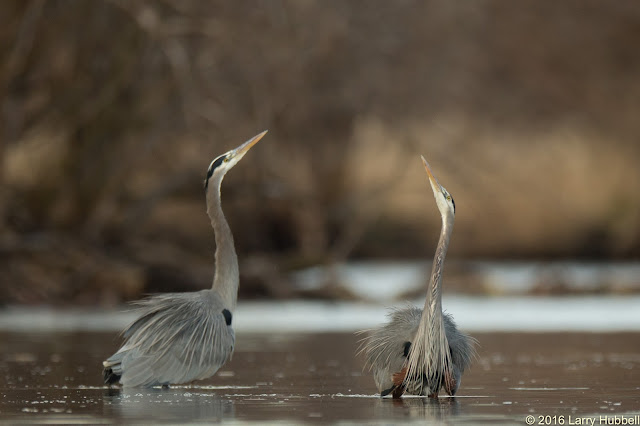 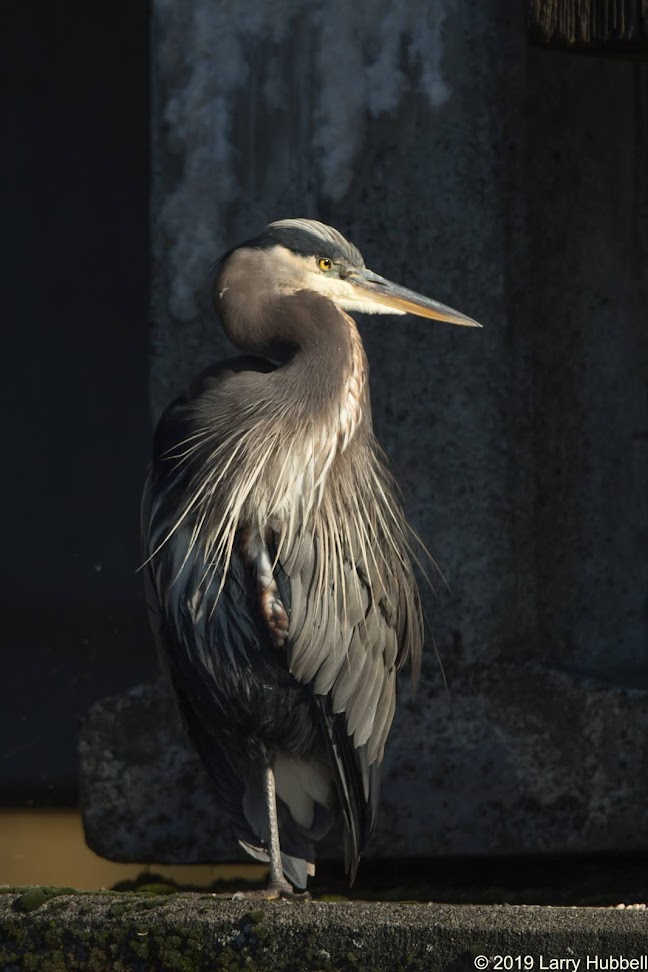 This late October photo shows a mature Great Blue Heron with an obvious difference from the adult in the very first photo. If you don't see the difference don't despair. It will be explained later. 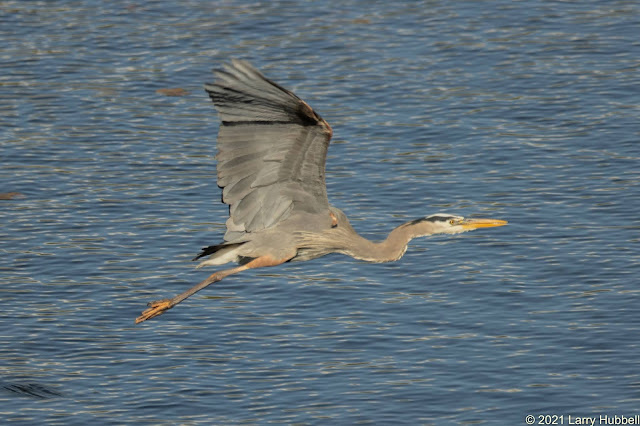 In the air, Great Blue Herons are not so strikingly beautiful. Their slow wingbeats, skinny legs, long necks, and larger wingspans make them cumbersome and slow. Once airborne, they are best described as steady.
I have watched a Great Blue Heron make a half-mile loop, with the only apparent goal being to gain altitude. It returned to almost exactly the point where it started, but instead of being just barely above the water, it was high enough to pass over the cottonwood trees along the shore.
Surprisingly, east of the Rocky Mountains Great Blue Herons are migratory. Click Here to see the ebird animation of sightings that reveals their migration. Locally, the numbers of Great Blue Herons seem to increase during Spring, however, actual migration is not obvious. 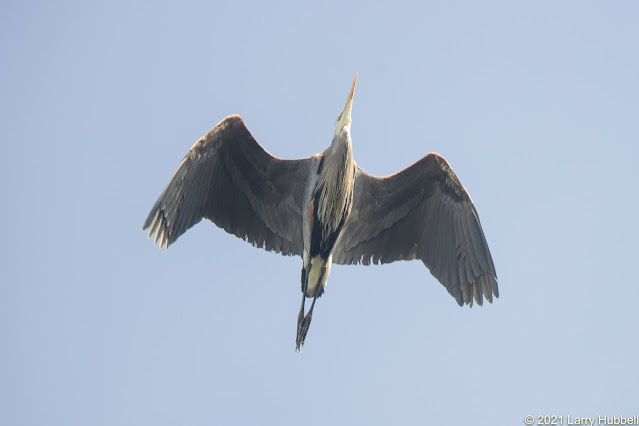 The view from below is not particularly elegant or striking.
Despite the obvious effort involved in flight, I believe our Union-Bay-foraging Great Blue Herons apparently nested near the Ballard Locks this year. They are known to fly several miles between their nests and their primary foraging spots. This Spring I consistently watched them coming and going from that direction.
A few years ago a small colony nested on the UW Campus. However, after Bald Eagles raided the site the Great Blue Herons have not returned. The colony near the Locks is larger, presumably older, and most likely somewhat safer due to its size.
By the way, the primary difference between the March and October mature Great Blue Heron's was the upper half of the bill, and a bit of the forehead, which were both grey colored in the Fall photo. 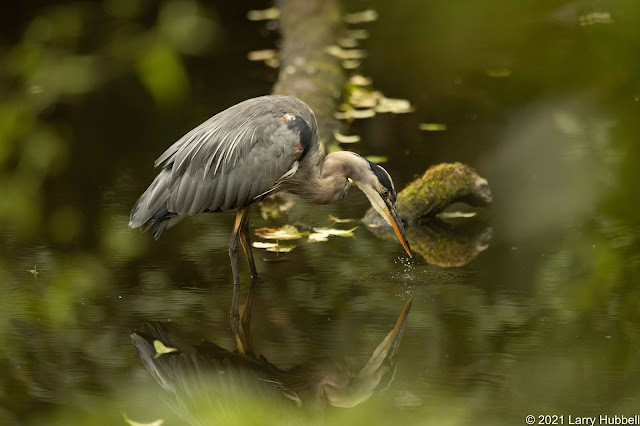 Earlier this month, this Heron took a sip of water then, like a duck, lifted its bill above its head to let the water run down its throat. 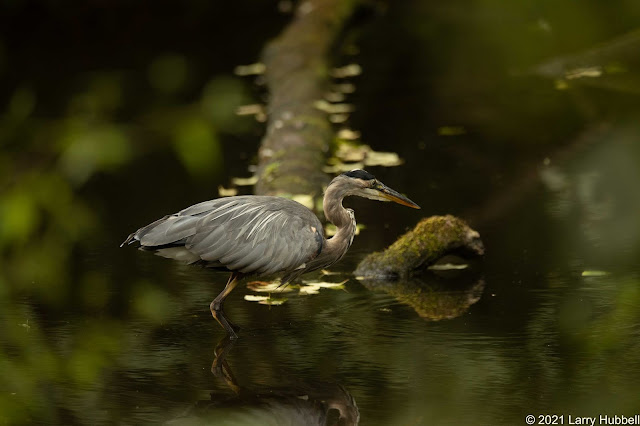 When hunting Great Blue Herons are also slow and steady.
When they see a creature of interest they slowly pull back their heads, forming a tight "S" with their necks. The tension, pressure, and focus increase... 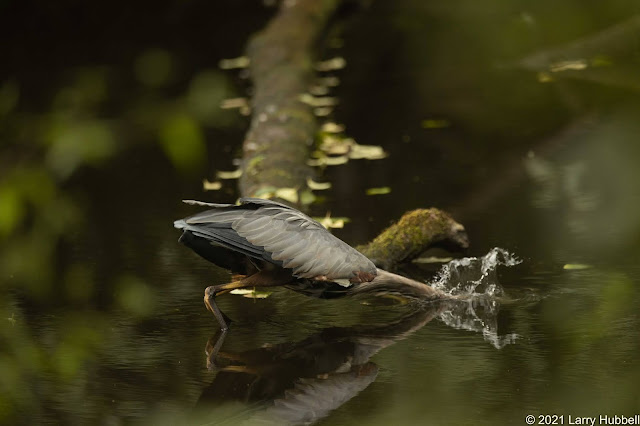 ...until it is strikingly relieved. 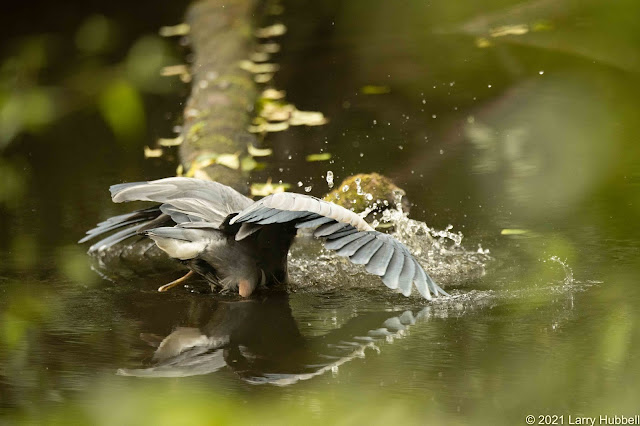 In this instance, the fish, frog, or polliwog evaded the initial lunge. 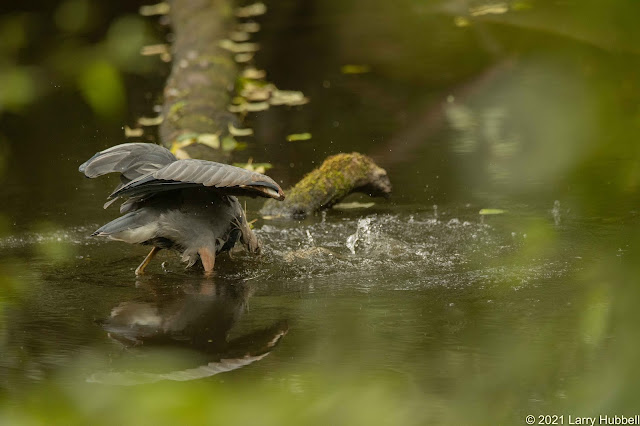 For a second or so, the Heron swished its head about in the water chasing its prey. 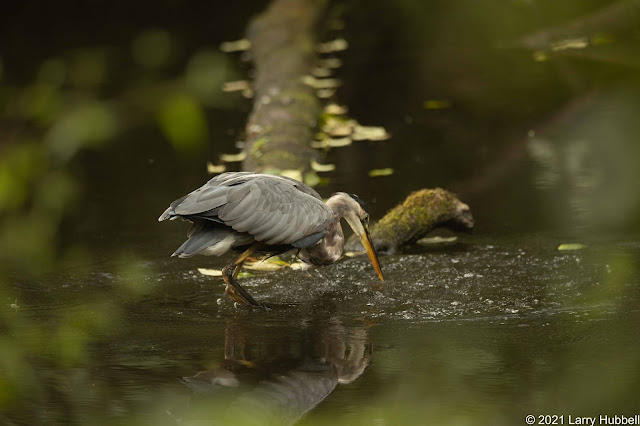 Sadly, at least for the Heron, the prey escaped.
If you would like to see an actual catch of a fish you can Click Here and visit a much earlier post that shows success. (It also may be interesting to compare how my photography and writing have changed since 2014.) 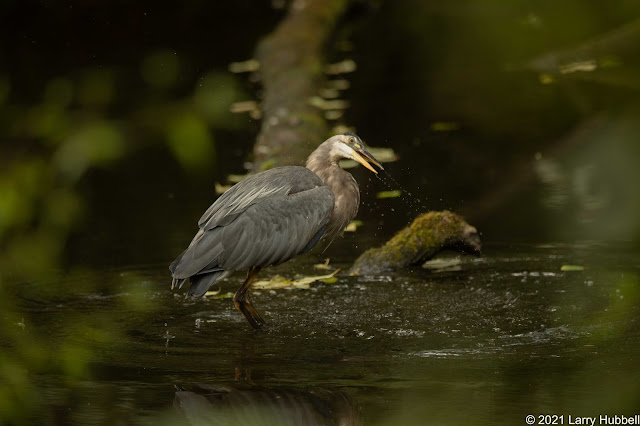 Afterward, it shook its head and sent water flying off its beak. 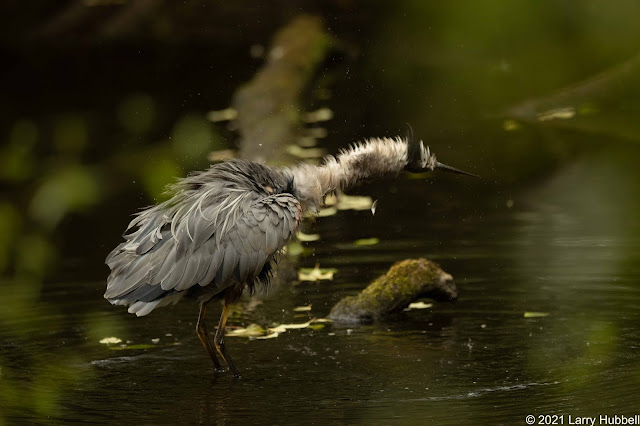 Ultimately, it raised all the feathers along its neck and shook its body in much the same fashion as a dog when it comes out of the water. I find it amazing that creatures so different can share behaviors that are so obviously similar. 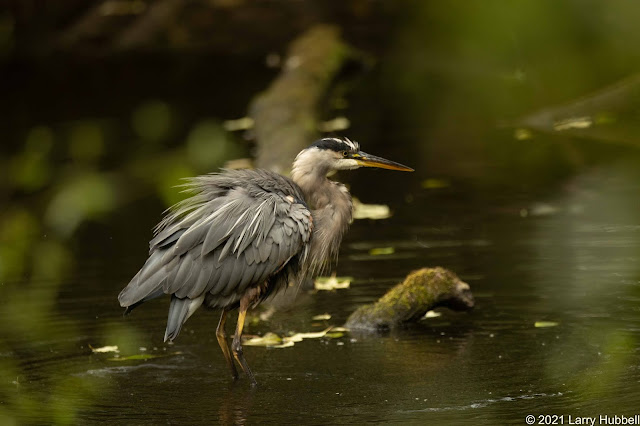 Personally, I find Great Blue Herons strikingly beautiful when standing, hunting, and doing their mating dances. However, their ability to fly almost seems like it was an afterthought in nature's design process. 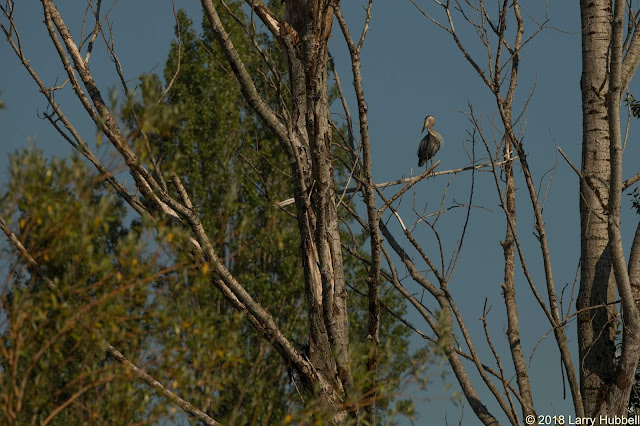 Maybe that is why seeing them in trees always feels a bit surprising.
By the way, speaking of Great Blue Herons in trees their nesting process is also curiously unique. You can see for yourself in a 2019 post by Clicking Here.
Have a great day on Union Bay...where nature lives in the city!
Larry
Going Native:
Each of us, who breathe the air and drink the local water, needs to watch and protect our local environment. Native plants and trees encourage the largest diversity of lifeforms because of their long intertwined history with our local environment and native creatures. I have been told that even the microbes in the soil are native to each local landscape. I hope we can inspire ourselves, our neighbors, and local businesses to respect native flora and to support native wildlife at every opportunity. I have learned that our most logical approach to native trees and plants (in order of priority) should be to: 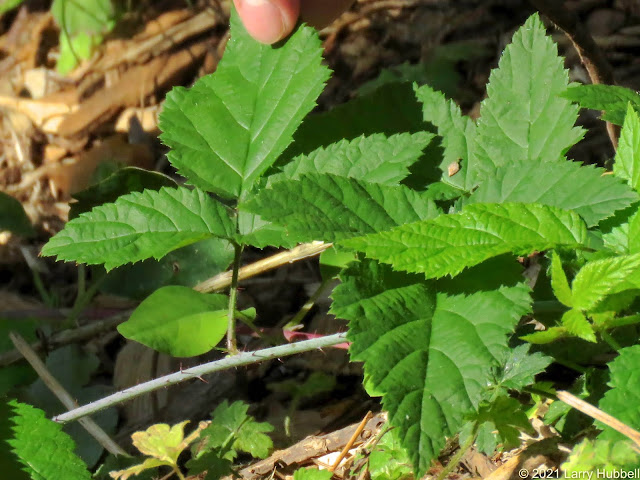 Is this plant native to Union Bay?
(Thank you to Elaine Chuang for supplying this photo!)


Scroll down for the answer.
****************
Trailing Blackberry
Yes! It is a native plant. Notice the slight bluish tint to the slender stalk which spreads gently across the ground. 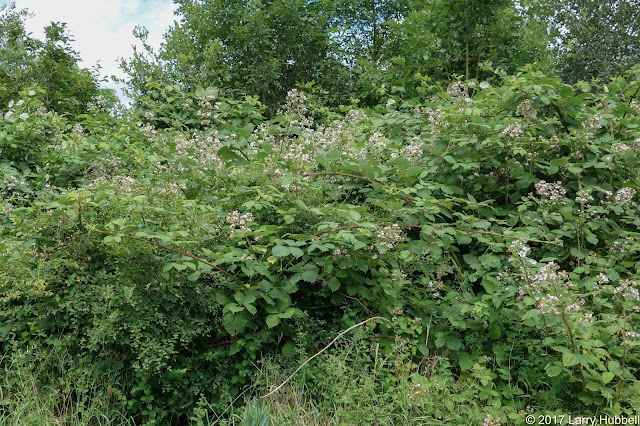 The Trailing Blackberry is dramatically different than these invasive blackberries. These leap skyward, spread densely, and profusely overshadow almost everything that is unable to move out of the way.
*****************
The Email Challenge:
Over the years, I have had many readers tell me that Google is no longer sending them email announcements. As of 2021, Google has discontinued the service.
In response, I have set up my own email list. With each post, I will manually send out an announcement. If you would like to be added to my personal email list please send me an email requesting to be added. Something like:
Larry, I want to see more of nature. Please add me to your personal email list.
Thank you for your patience and interest! 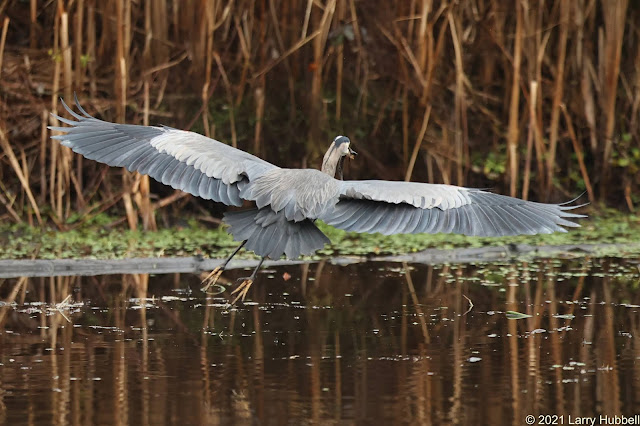 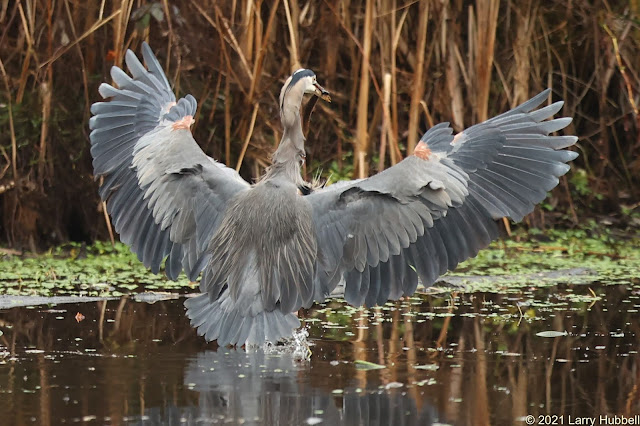 Alula, the small feathers on the upper edge of the wings. Click Here to learn more. 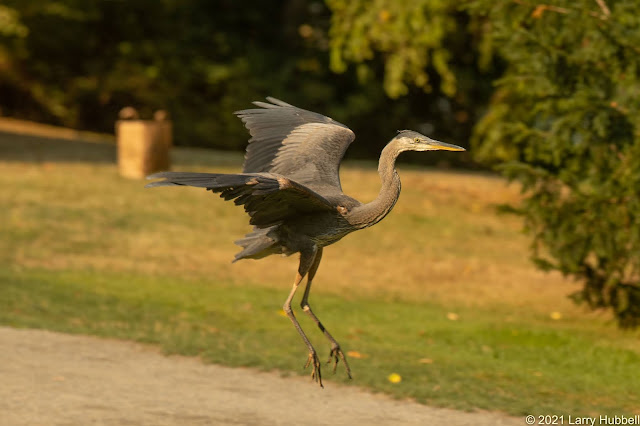 Is this bird a juvenile or an adult? 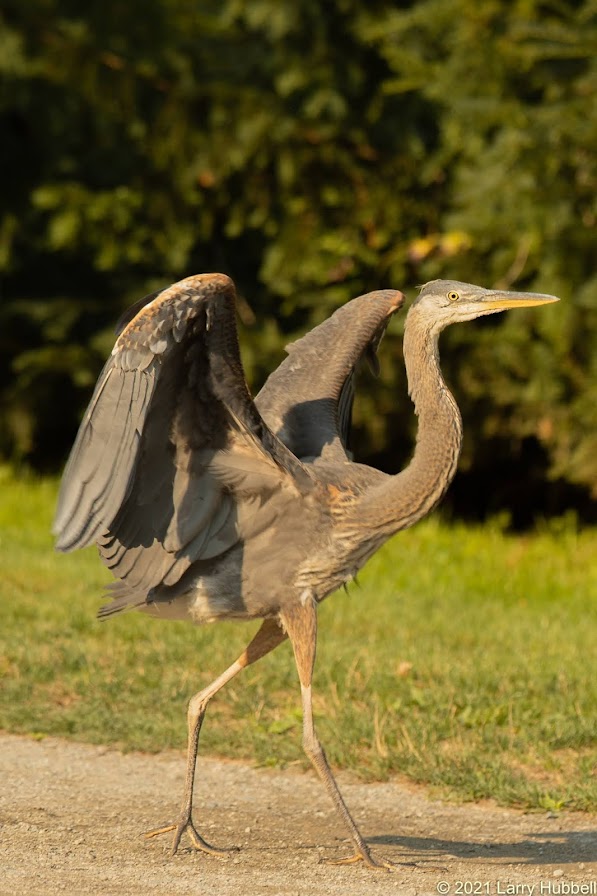 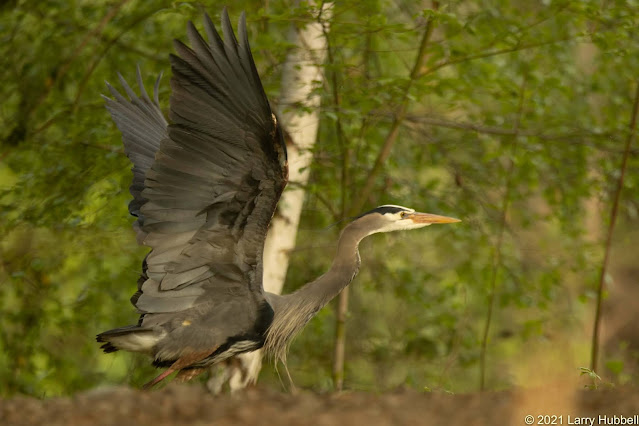 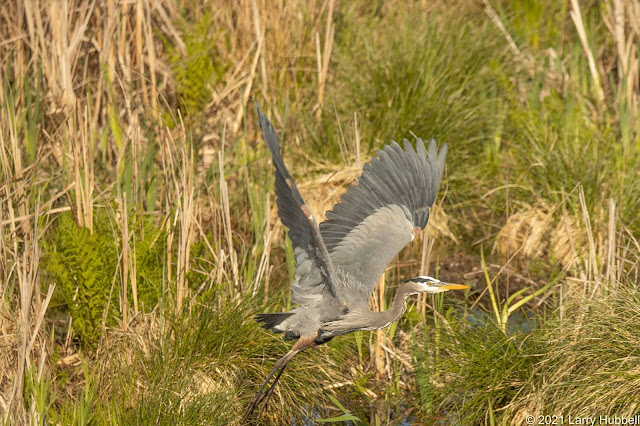 Posted by Larry Hubbell at 1:05 PM