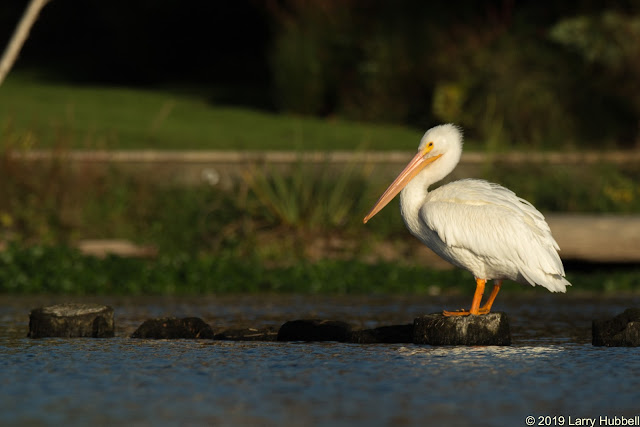 Pelicans are always awe-inspiring, but the clean, pristine look of an American White Pelican is especially amazing. I do think they look equally elegant... 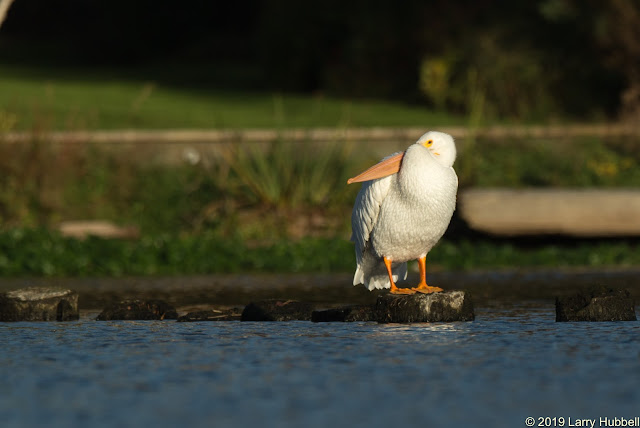 ... and awkward. From a proper distance, their size is deceptive. On average they weigh about three times as much as a Great Blue Heron, fifty percent more than a Bald Eagle and have a wingspan in the nine-foot neighborhood.

On Tuesday, October 15th, my friend Tom Cotner sent me a text. He was watching an American White Pelican on the north side of Union Bay. My only previous sighting of a Pelican, while at Union Bay, happened when one passed overhead. That highly elevated bird never missed a wingbeat and never came close to the water. Sadly, when I got Tom's message I was out of town. I suspected the current Pelican was probably migrating south. I assumed it would be gone before I could return.

A couple of weeks later, I started receiving photos of a Pelican at Union Bay, from multiple friends. Finally, on October 28th, while visiting the Union Bay Natural Area, I saw the Pelican sitting in the distance, outside Yesler Swamp. (Given the location, I suspect it had been around for the last two weeks.) Immediately, I began wondering if I could walk home and paddle back before the bird left. Surprisingly, I made it. 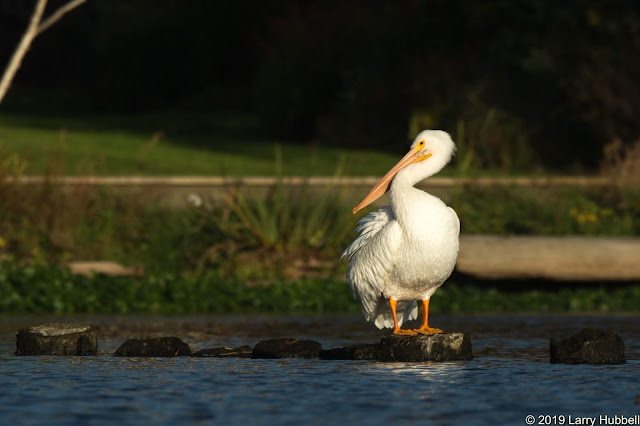 I am thinking we should call him, Louis. Technically, Louis may be Louisa. I do not know of any visual clues for determining the gender of an American White Pelican. If you would like a little challenge you might try to guess why I think Louis (or Louisa) is an appropriate name. I will explain later.


Louis must have found fish fairly plentiful on Union Bay. By late afternoon, his urge to feed was apparently satiated.

It did seem odd to see just one Pelican by itself. 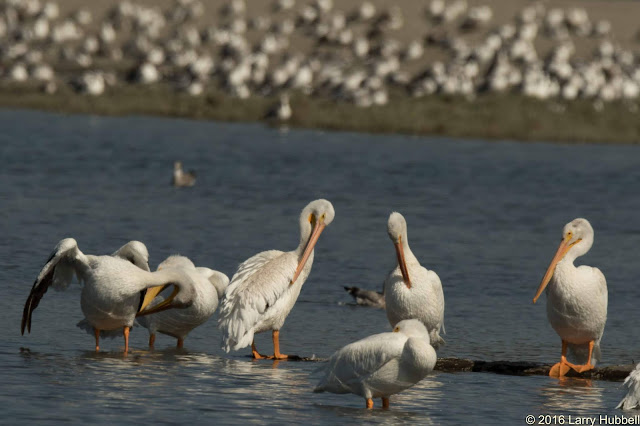 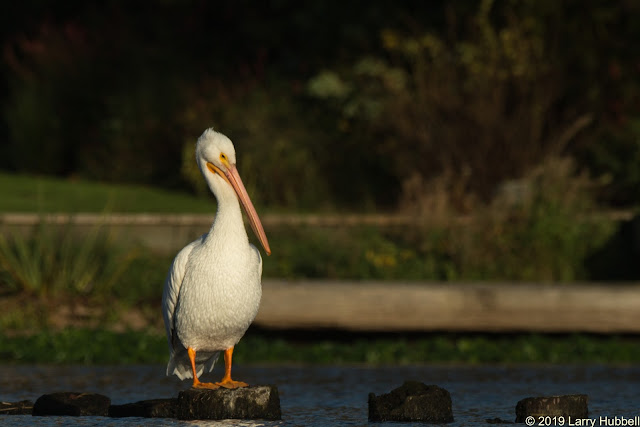 In any case, Louis did not look lonely. He found a particularly well-placed piling, somewhat protected from the wind, and perfectly aligned with the afternoon sun. 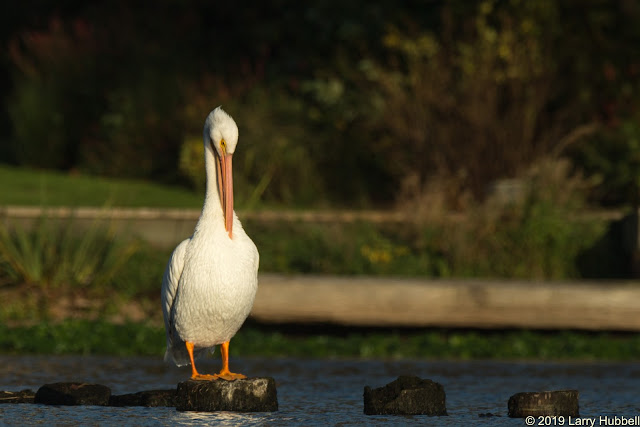 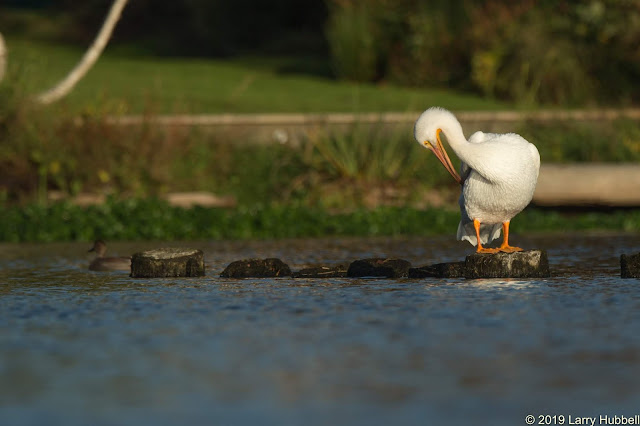 I wondered if the tip of the bill was flexible. 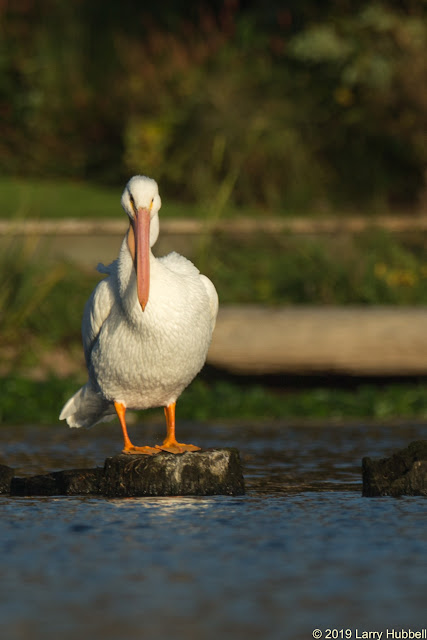 Later, I read that the tip is hard. It can make small wounds similar to paper cuts, according to a fisherman who tried to unhook from a mutually caught fish. This photo shows how surprisingly quick the bill tapers down at the end. 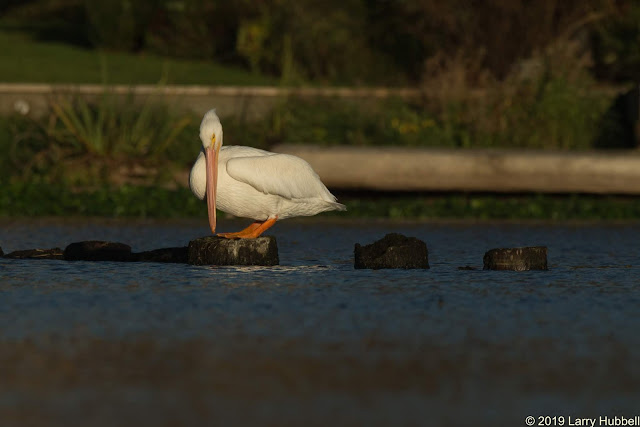 I also found it curious to note the clear color difference between the legs and the bill. I cannot imagine how it benefits Pelicans to have such brightly colored feet. 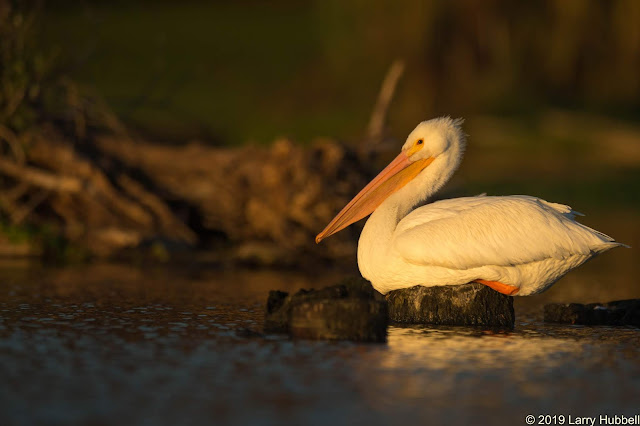 A Pelican's gular pouch, used to catch and retain fish, is its largest claim to fame and critical to its survival. 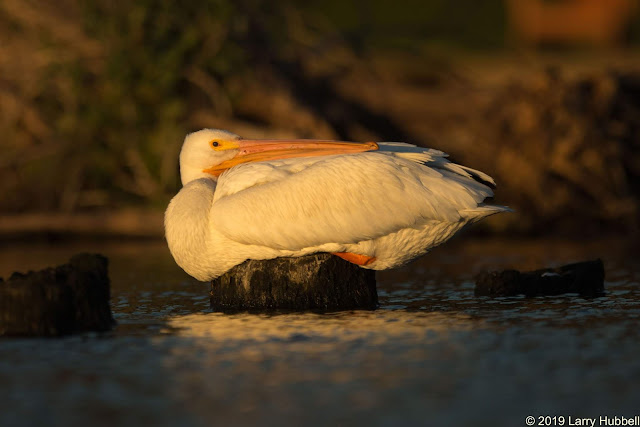 Sadly, for me, Louis began to put his pouch away and settle in for the night. 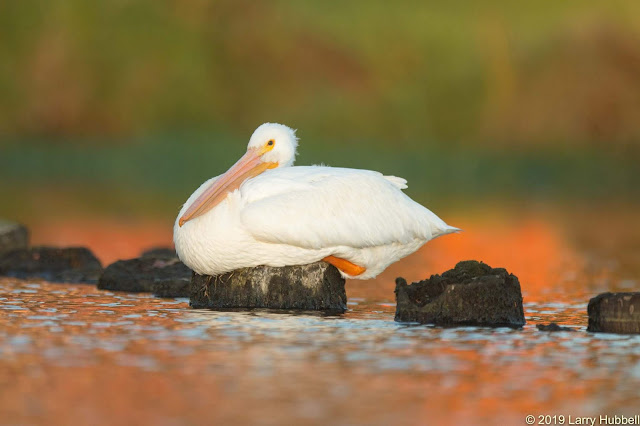 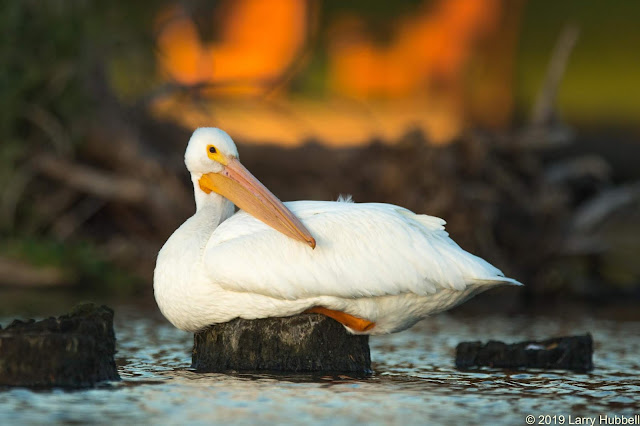 ...to any movement or sound, but he never shifted from his perch on the piling. 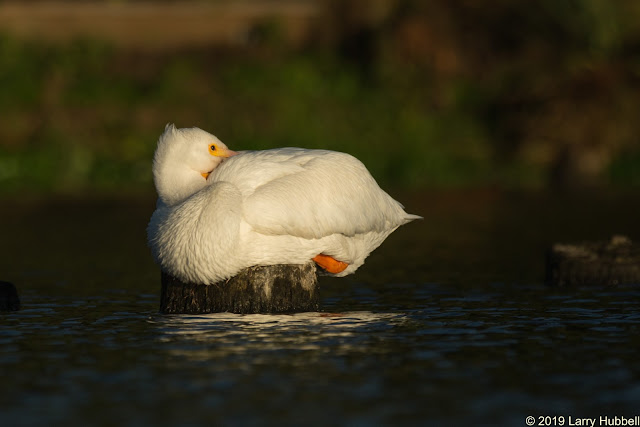 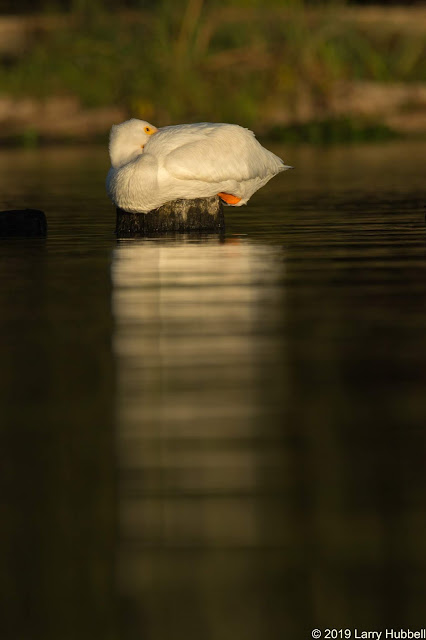 If my only sighting of Louis had been like this photo, I am not sure that I would have realized he was a pelican. 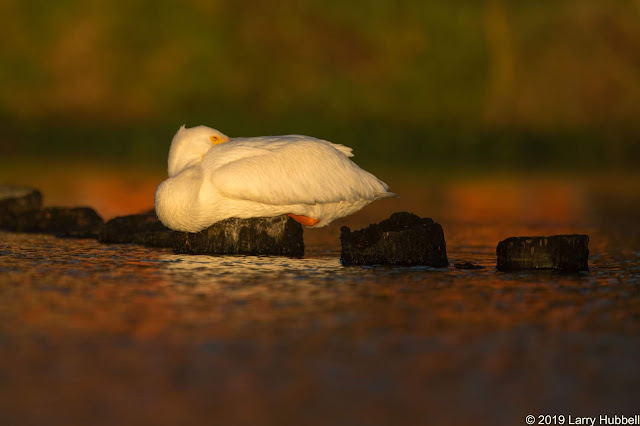 If you look closely, you can see that his eyelid is arranged quite differently from ours. It shuts in the upward direction.

On Wednesday morning I paddled back over, just hoping the Louis was still there and might a bit more hungry and active. I was halfway across the bay when I noticed a large bird with an unusual wingbeat - almost none. It was Louis gliding over the shallow water on the north side of Union Bay. With his neck retracted and wings level, steady and outstretched he resembled a plane more than a bird.

His gliding and soaring capability is related to his approximately nine-foot wingspan. By comparison, a Trumpeter Swan weighs about fifty percent more and has a wingspan which is two feet shorter. 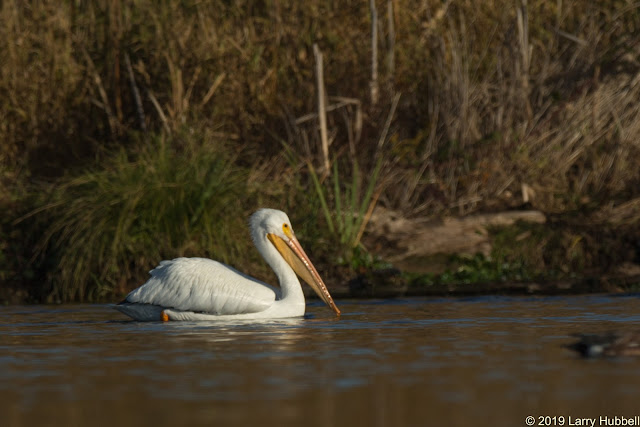 After doing a 180-degree turn, near the Conibear Rowing house, Louis returned and sat down near Yesler Swamp. 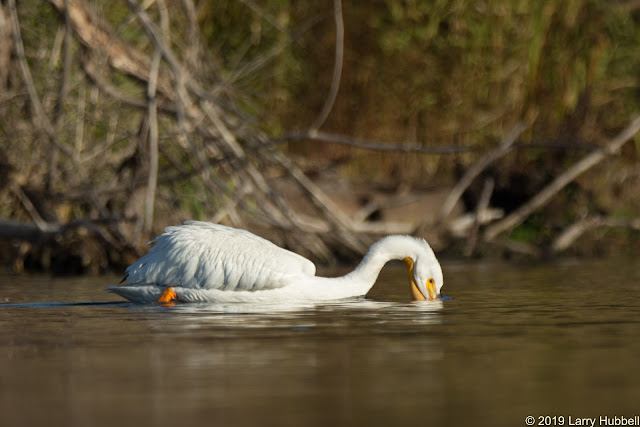 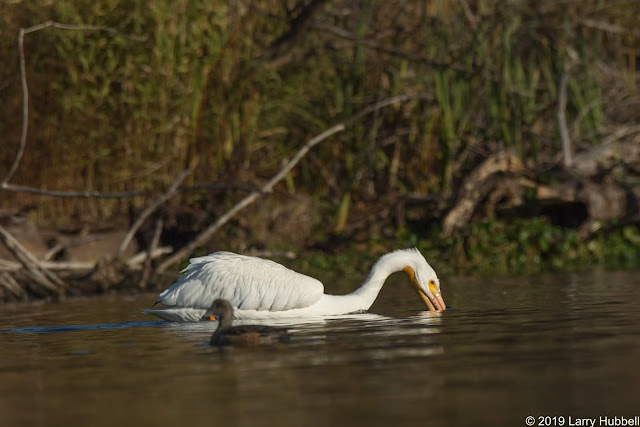 Instead of slowly wading and watching for fish, Louis paddled, snorkeled and scooped. 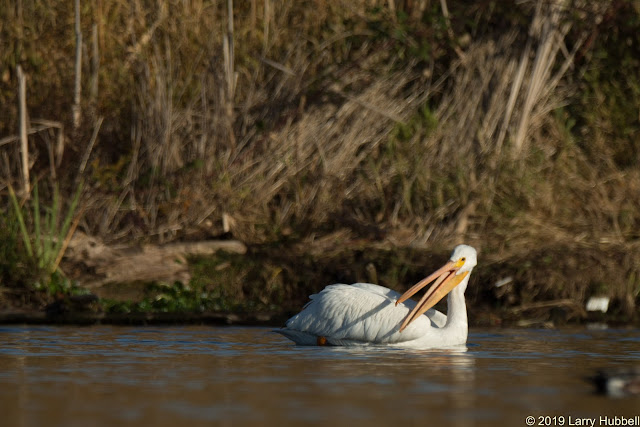 Logically, the fish which pelicans catch are generally smaller than their pouch. This makes the fish hard to see and the process difficult to document. 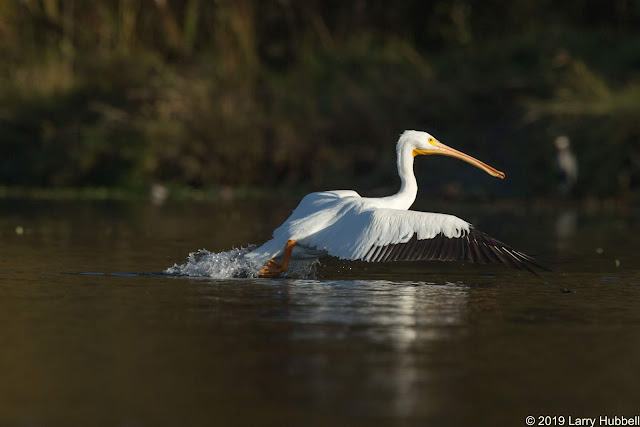 Just before a Bald Eagle flew over, the wind began to blow from the east. 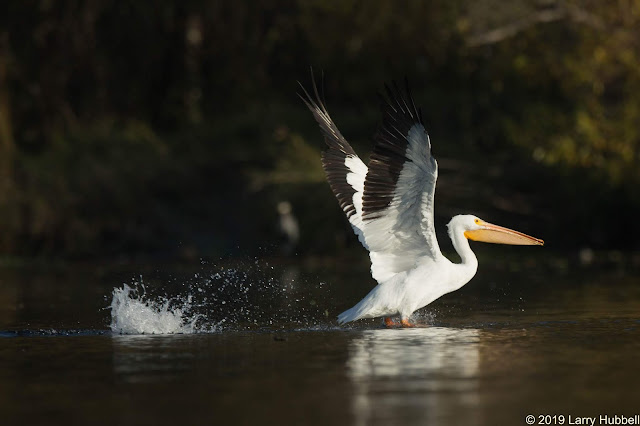 With surprisingly few steps, three I think, Louis took to the air.

Have you wondered why their wingtips are black? I did, until I remembered Dennis Paulson teaching us that white feathers are the softer and wear faster. Maybe the value of black wingtips is that they last longer. Snow Geese also have black wingtips but, curiously, Trumpeter and Tundra Swans do not. I wonder why? 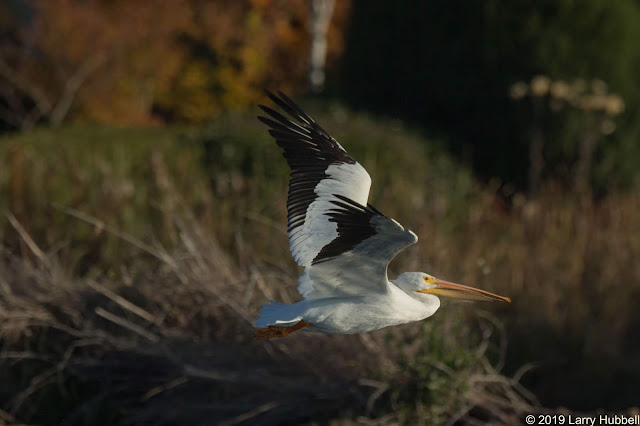 Louis headed east, no doubt using the breeze for lift. I watched him grow small in the distance as he circled up in a thermal above Laurelhurst. I have not seen him since. It may be a coincidence but later in the morning when I attempted to circle Elderberry Island I noticed I was breaking a thin sheet of ice. American White Pelicans are reported to prefer temperatures of 40 degrees Fahrenheit or better. I suspect Louis is on his way to warmer weather.

I am certainly glad to see my first American White Pelican fishing and resting on Union Bay. Hopefully, Louis enjoyed the visit and will stop in during his next migratory journey.

By the way, I chose the name Louis because Louisiana is the only state which has a Pelican for its state bird. 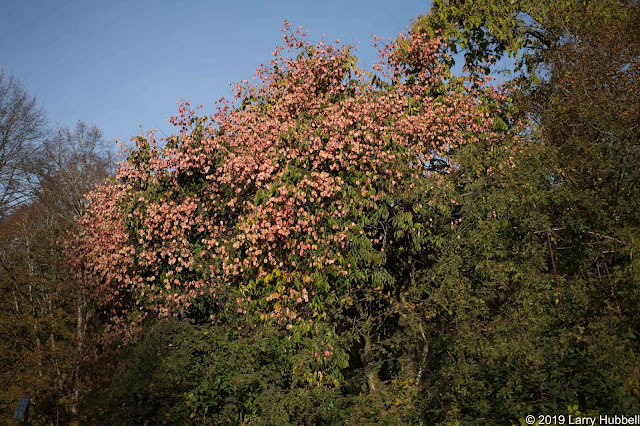 Is this tree native to Union Bay? 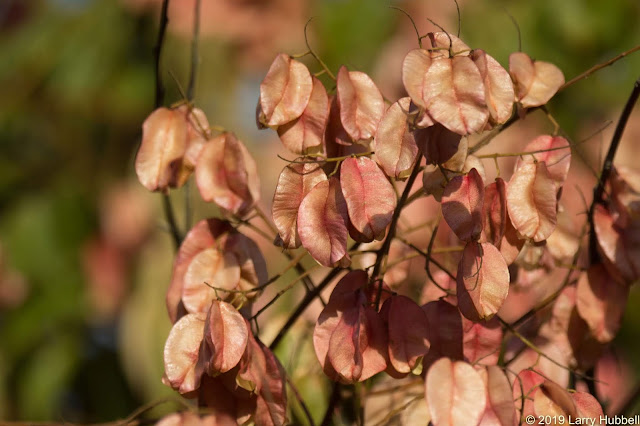 Maybe this closeup of the fruit will help you decide.

Pride of India: It is also known as the China Tree or the Golden Rain Tree. Last month, when someone asked me what kind of tree this was. I was dumbfounded. I had walked passed it for years without really noticing it. The fruit of this tree is about 2 and a half inches long, it is bladder-like with three partitions and it contains two or three small black seeds that are not quite pea-size. As two of the names imply, it is not native to Union Bay.

Posted by Larry Hubbell at 1:00 PM