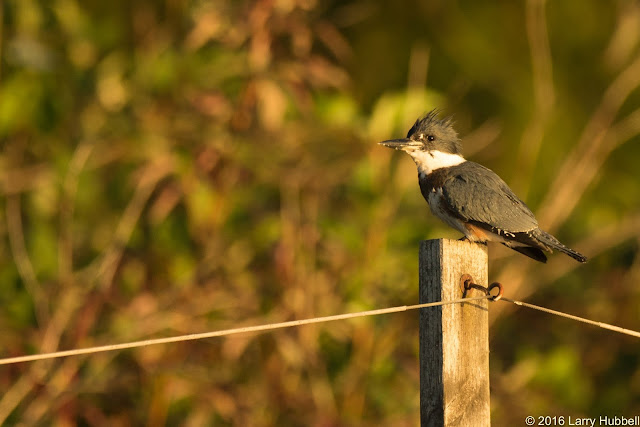 Wednesday morning, the kingfisher chattered noisily, announcing my entry into its domain. 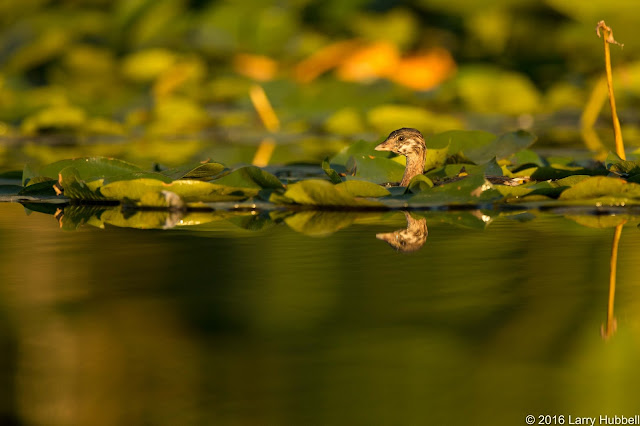 The pied-billed grebe watched silently as I paddled north. The orange sun glowed fiercely as it fought to rise above the Cascades. Initially, the wind was still and the water mirrored the world above. I was hoping to watch our three young Union Bay osprey diving for fish.

While gliding between islands of cattails, a small bird flushed. I caught a brief glimpse of its silhouette. Its disproportionately long bill was hanging down at a 45 degree angle. The word 'Snipe' immediately popped into my mind. I wondered, could it be anything else?

The bird was oddly difficult to track. Repeatedly, it seemed to nearly stop in midair, before swiftly switching direction. The arc of its disjointed flight was as beautiful as it was unpredictable. The stop-and-go stuttering reinforced my initial impression. Excellent marksmen (or markswomen) are called snipers for a reason. Sadly, the bird was gone before I even thought about lifting my camera.

Near the osprey nest, the sunlight warmed the water creating an early morning mist. 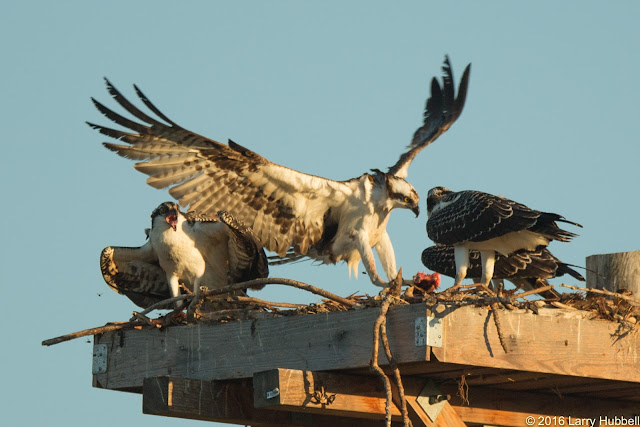 A few minutes later, Chester appeared with a second helping of food for his young. At this point, the two young males had food to eat. Sadly, their sister simply sat in the middle of the nest watching, waiting and begging. (None of the young birds seemed particularly interested in securing their own food.)

Since watching their first flights, I have been thinking of the young male osprey as Wilbur and Orville. Later, when I learned how close the Wright Brother's were to their younger sister, Katharine, the names Orville, Will and Kate seemed very appropriate. It also seems fitting, that the last time young osprey learned to fly above Union Bay could have been about the same time the Wright Brothers were learning to fly above Kitty Hawk. 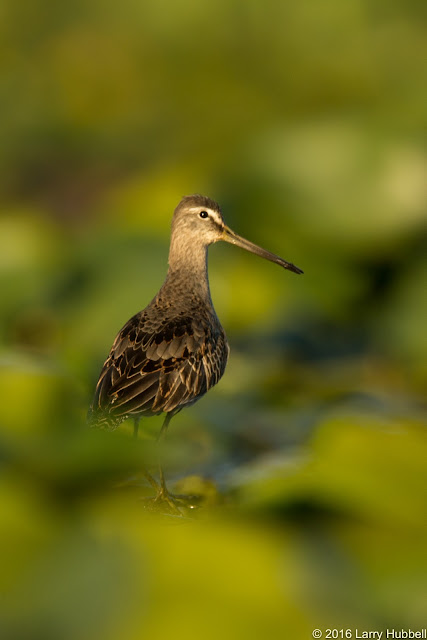 While watching the young osprey, a shorebird came and landed nearby. It was about the same size and shape as a snipe. It also used its long bill to search the mud for morsels of food. I assumed it was the same bird I had seen earlier. 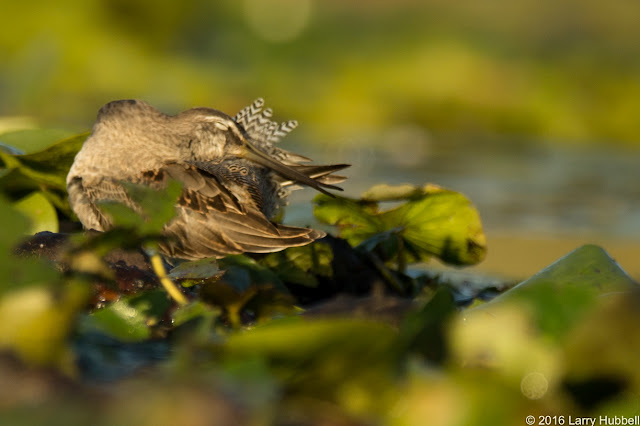 There were hints, which I only noticed later, that this was a actually a different type of bird.

I noticed how it shut its eyes while preening. I also noticed how the ends of its bill spread apart. Compare this photo with the previous and you will notice the incredible flexi'bill'ity. The tips of the bill have evolved into 'fingers' which can probe, sense and grasp small creatures hidden in the mud. 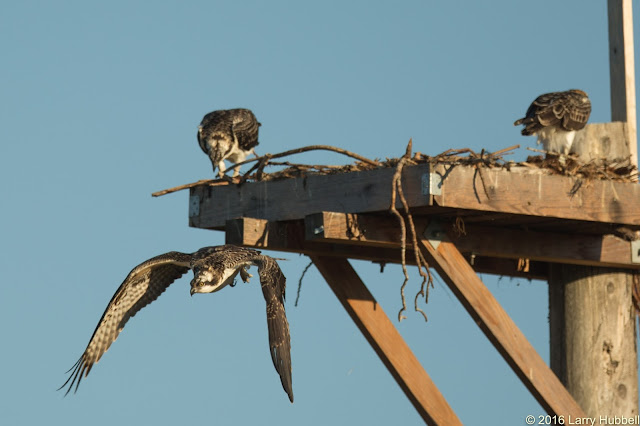 My attention was further split between red-shafted flickers, green-winged teals, red-winged blackbirds and of course the incessant cries of Kate, the young female osprey. Suddenly, one of the young males leaped off the nest and took to the air. Kate quickly assumed his spot at the table. 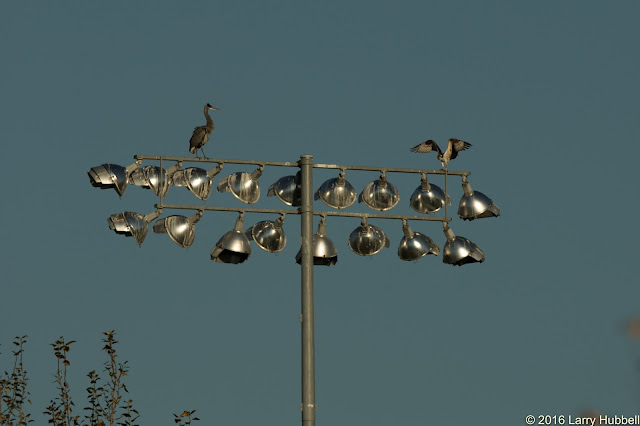 The young osprey landed on a light pole above the baseball field and confronted a much larger great blue heron. I have watched the parents harass herons, but this was the first time I have seen one of the young get involved. I think the essence of the issue was related to the light pole 'overlooking' the osprey nest. 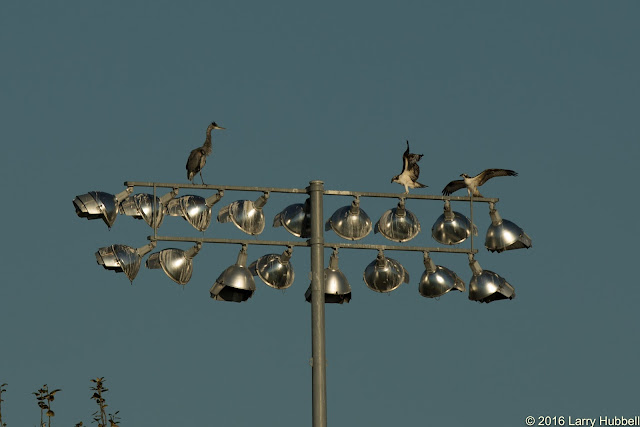 A moment later Kate joined her brother and added a little weight on the osprey end of the scale. At this point, I began to wonder what would happen next. 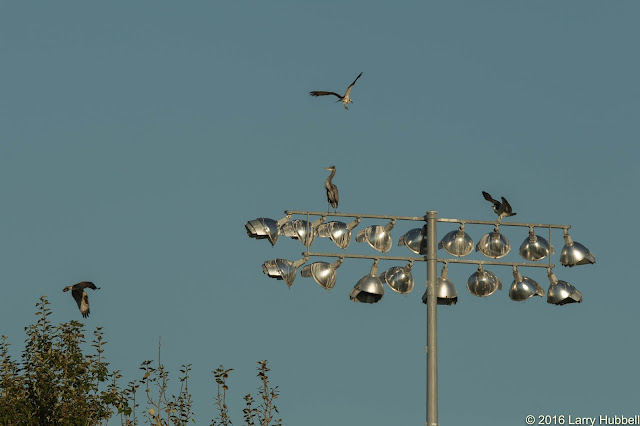 When Chester joined the fray, I thought for sure the heron would take flight. 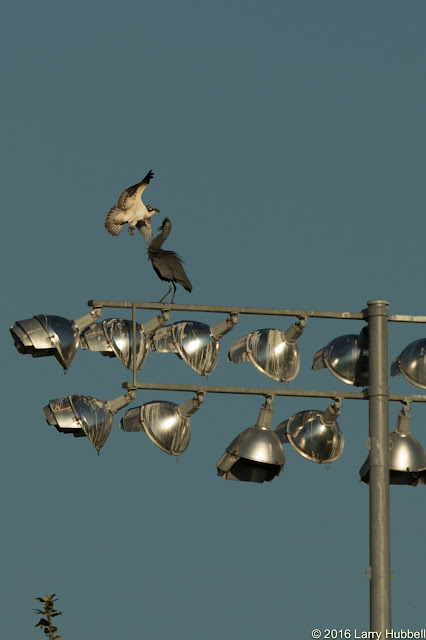 Surprisingly, the heron stood its ground. 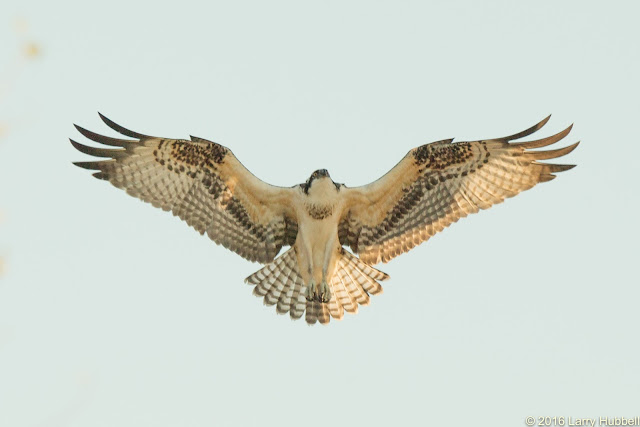 Kate returned to the nest. I find it incredible that in young birds, nearly every feather can be perfectly pristine. Slowly, each of the osprey gave up and dispersed. 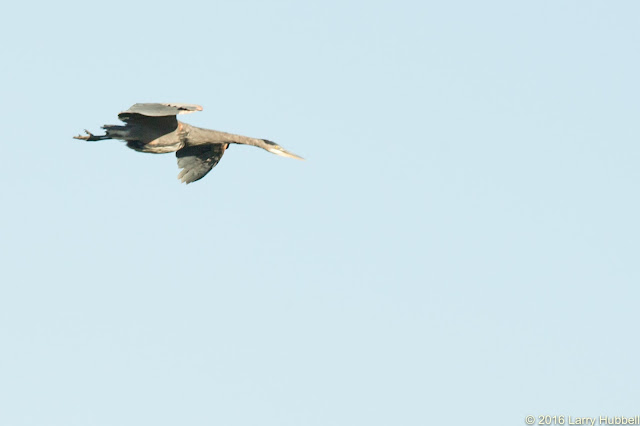 Finally, the heron dived off the light pole and headed toward the nest. I became a bit nervous. When the heron veered off towards the Carp Pond, I breathed a sigh of relief. 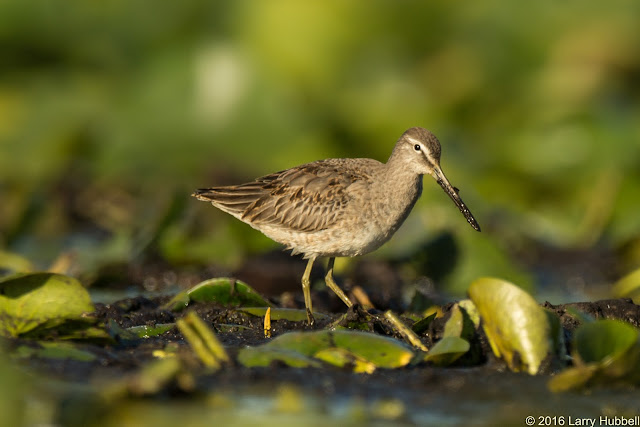 The 'unsnipe' took turns sleeping and feeding through all the osprey drama. 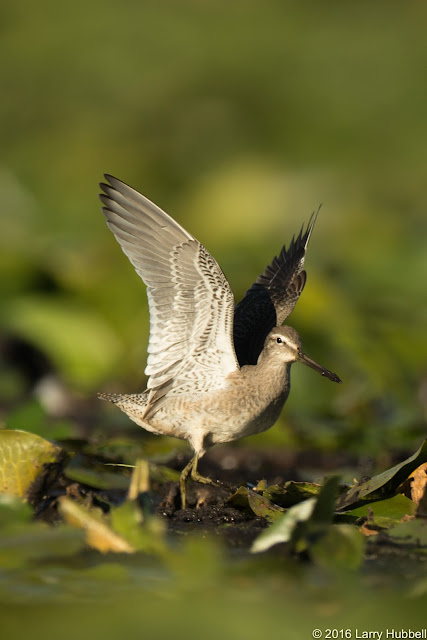 When it traded places with the killdeer, the light coloring under its wings and the color of its tail provided hints to its true identity. 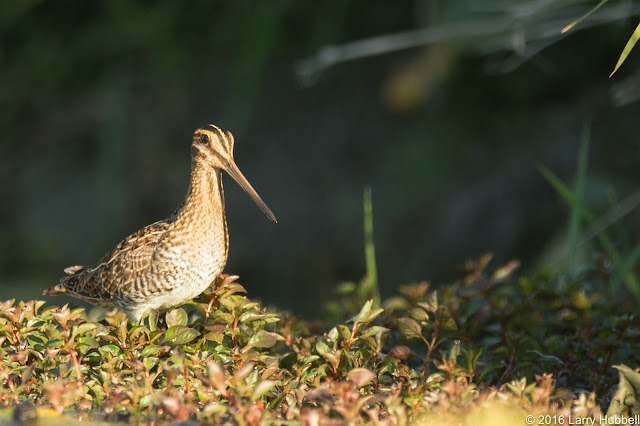 Suddenly, a true Wilson's Snipe flew in and landed nearby. 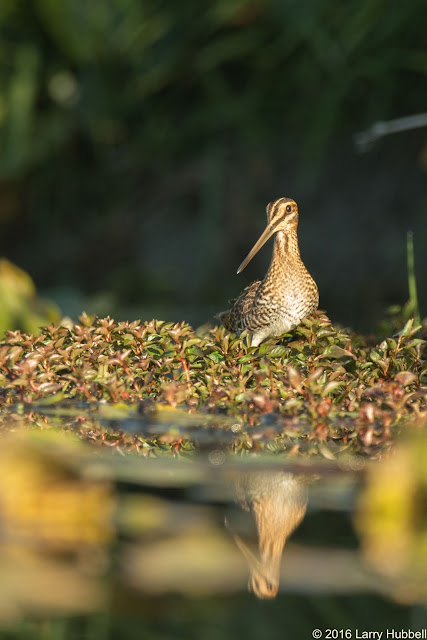 At this point, I at least realized that there was a difference in the plumage of the two birds. 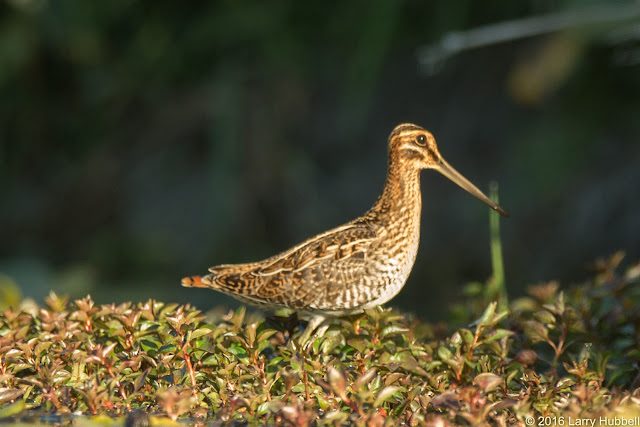 Take a moment and compare this photo of the snipe with... 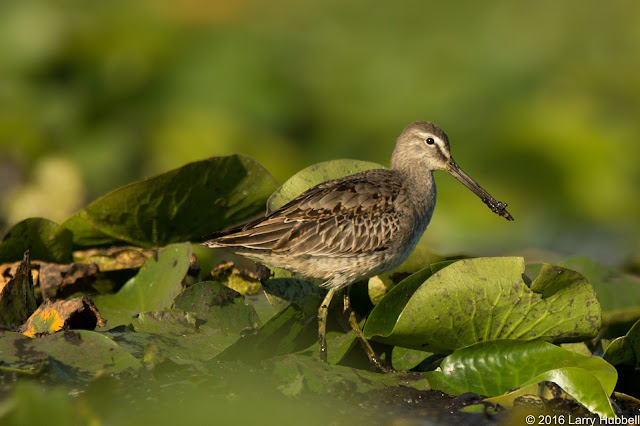 ...the 'unsnipe'. Both birds' necks go up and down so that difference is not significant.

You can even scroll back through the previous photos if you would like, to really search for differences between the two birds.

With the luxury of photographs, I can see that the snipe has additional stripes across the top of its head, more rusty coloring on its wings and nape, an obviously orange stripe on its tail, 'vertical' white striping on it back and my Sibley guide points out that the snipe is darkly colored under its wing.

Later, Dennis Paulson confirmed my suspicion that the 'unsnipe' was actually a dowitcher. I also learned that in freshwater habitat a dowitcher is most likely to be of the long-billed variety, as opposed to the short-billed dowitcher - which looks very similar - but is usually found near salt-water.

The dowitcher flew right at me before veering off to the south. The snipe took to the air and followed. Later, as I headed home for lunch, I found the two birds again, side by side working in the mud.

While the dowitcher is most likely a migrant passing through, the snipe might very well be a resident bird, although rarely seen by me. I feel incredibly lucky to live near Union Bay and to share my time on Earth with so many wild and wonderful creatures.

This week's post is dedicated to Dr. Sara Reichard. Dr. Reichard, director of the University of Washington Botanical Gardens, passed away unexpectedly at the end of August. Her vision, inspiration and leadership will be sorely missed.

The following links will help you learn more about her exceptional life:

When visiting the Arboretum or the Union Bay Natural Area, when observing the diversity of plants and trees or when watching the young osprey we should all be thankful for Sara's leadership and guidance which has enabled life to continue to flourish in these very special places.