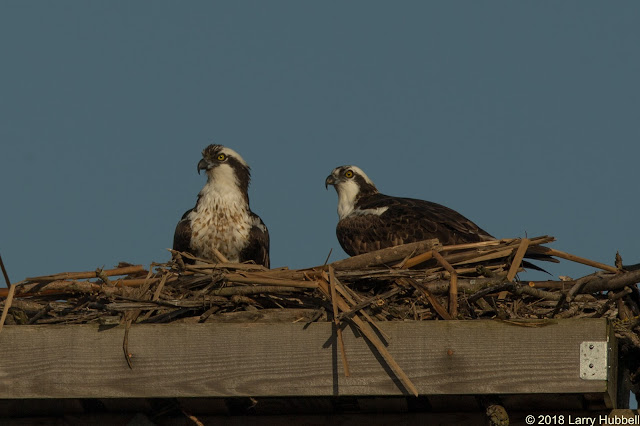 The Osprey are back! The female, on the left, has a brown necklace. Males usually have pure white chests. 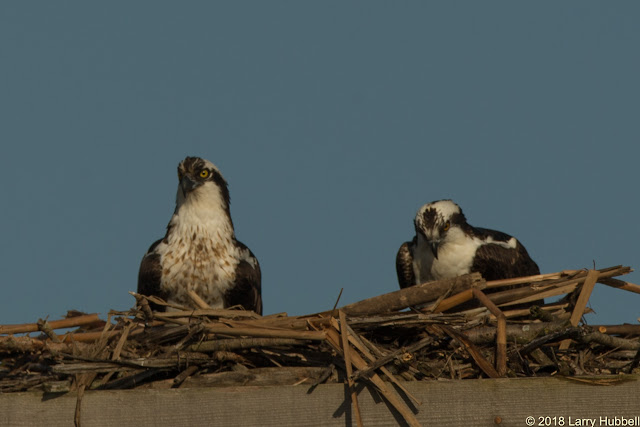 As soon as I saw them I started to wonder, Are they Chester and Lacey, the same pair which left here last fall? Did they really fly all the way to Mexico, spend the winter at separate locations and fly all the way back without mishap? Are they here to reunite and once again raise young on Union Bay?

Comparing the patterns on the top of their heads is the only way I know to attempt to prove their identity. The patterns are supposed to be unique to each bird. Let's take a quick look. 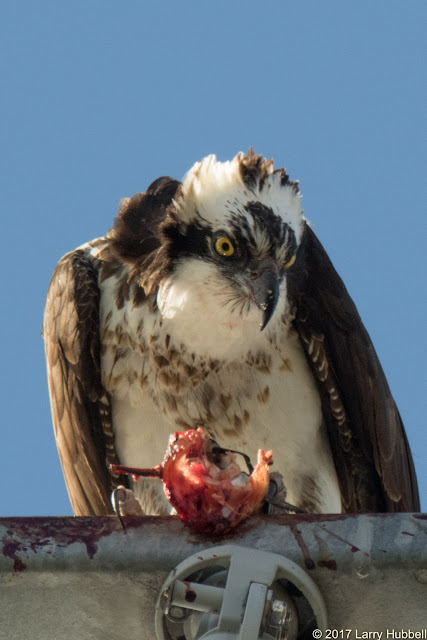 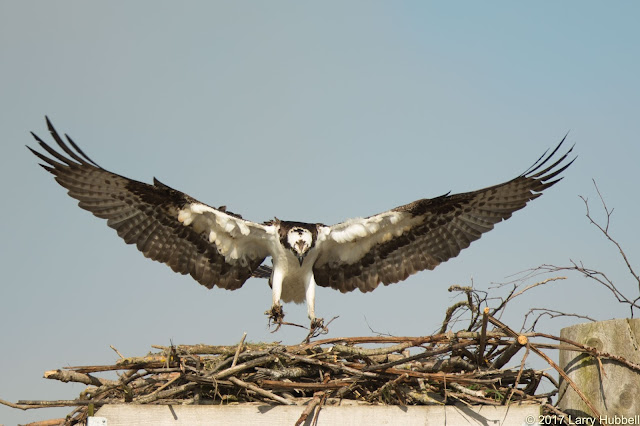 ...here is Chester's. Lacey's forehead is darker, while Chester has a clearly visible 'V' of white on his forehead.

You can read more about their history on Union Bay in the 2017 post, Diamonds Are Optional. Plus, you can see photos of their half-grown young in last year's post, Smoke and Ash. I think young Osprey are exquisitely beautiful birds. 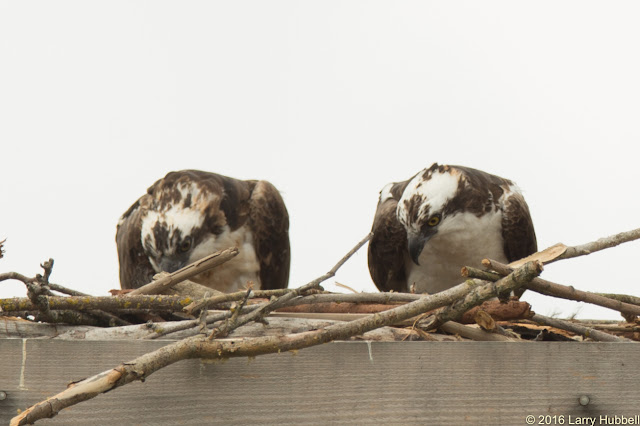 In 2016, the relationship between the adult's head patterns looked similar to what we see this year. Lacey, on the left, clearly had the darker head.

I do think the dark feathers, on both of their heads, seem to have expanded a bit this year. Maybe they each had a healthy winter and were able to grow slightly more luxurious feathers. Still, overtime I think Lacey's forehead is consistently darker than Chester's. I believe these are the same two Osprey which we watched lay eggs and raise young for the last two years.

Since Osprey have been known to live for more than two decades, Click Here and then scroll to the bottom to read about the oldest know Osprey, we can assume they may be returning for many more years to come. 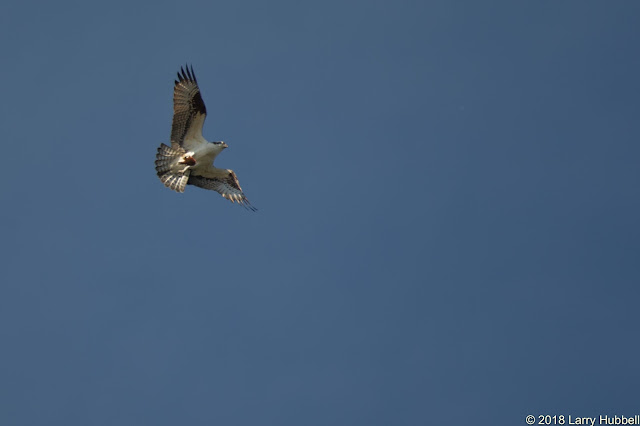 On Monday I saw and heard Chester doing something I had never seen before. He was repeating a piercing cry while flying, hovering and diving above the UW Baseball Field. All the while he was clutching half a fish in his talons. Lacey sat calmly on the nesting platform.

As I watched, Chester would dive about 75 feet and then pull up and do it again. In spite of the dives, he seemed to be gaining in height. In the process, he slowly drifted to the east. 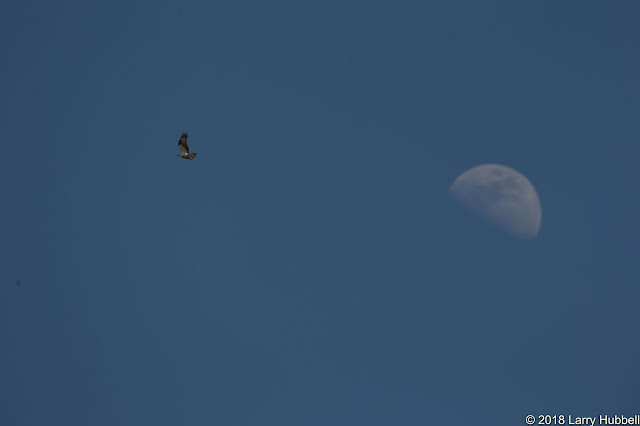 He ended up high above the nesting platform. It felt like he was halfway to the moon. 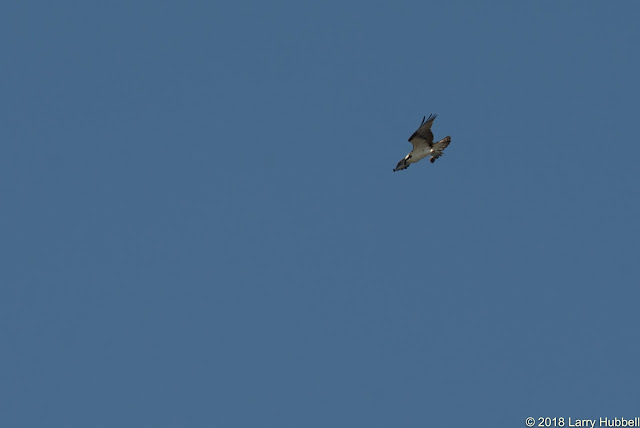 Hundreds of feet in the air, with the fish tail hanging below him, Chester continued to dive, hover and rise. 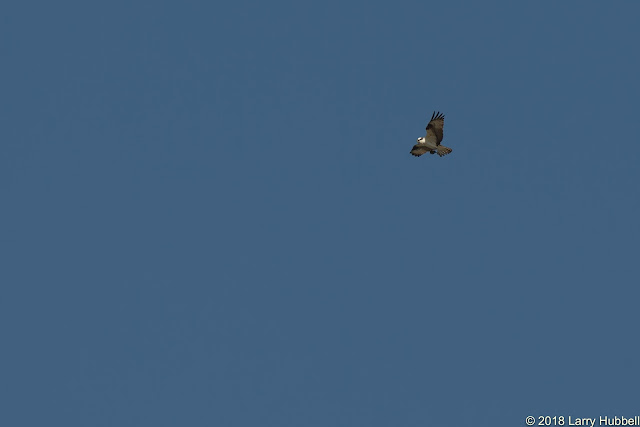 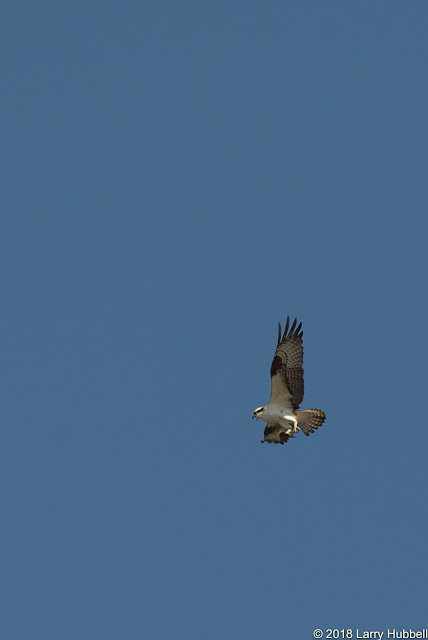 He was clearly focusing his attention on Lacey. It seemed obvious this was a mating ritual. Later, I would read in multiple sources that this behavior is called an Air Dance. 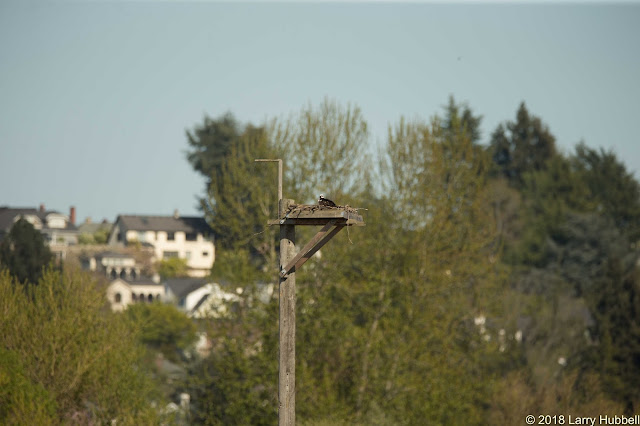 Finally, Lacey lifted off from the platform and started drifting south across Union Bay, her slow, lazy circles made it look like she was searching the water for fish. Overtime, she did appear to be slowly rising higher. 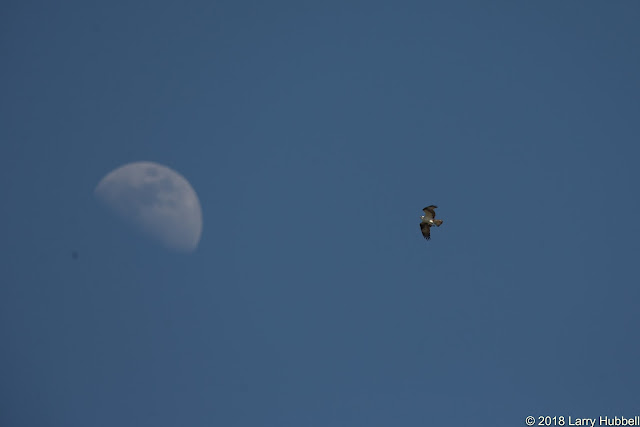 Chester followed after her and continued his labor-intensive dance of love. 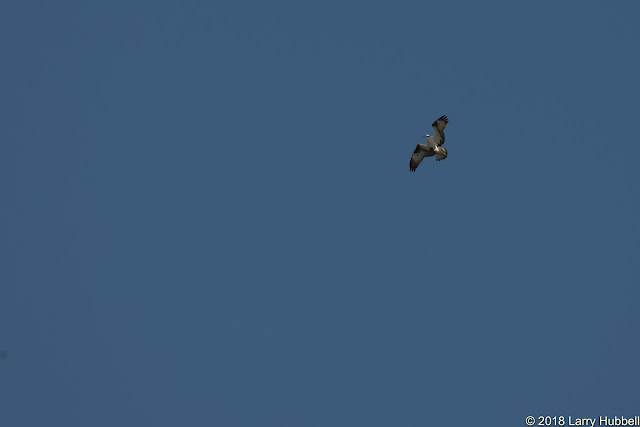 After ten minutes or so they both disappeared in the distance. 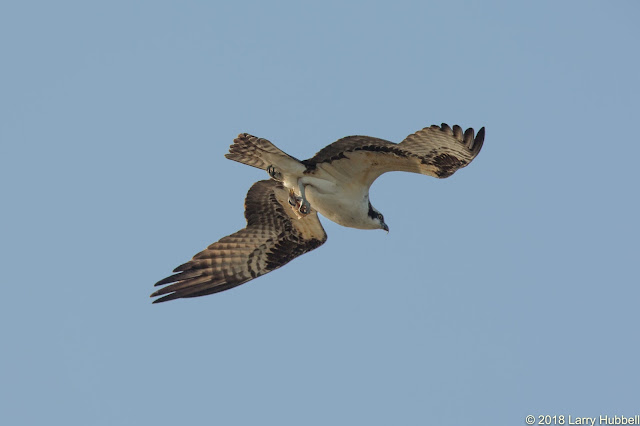 About an hour later they returned, and Chester was still carrying the fish tail.

I didn't see them mate on Monday, but I don't know what happened on the south side of the bay. 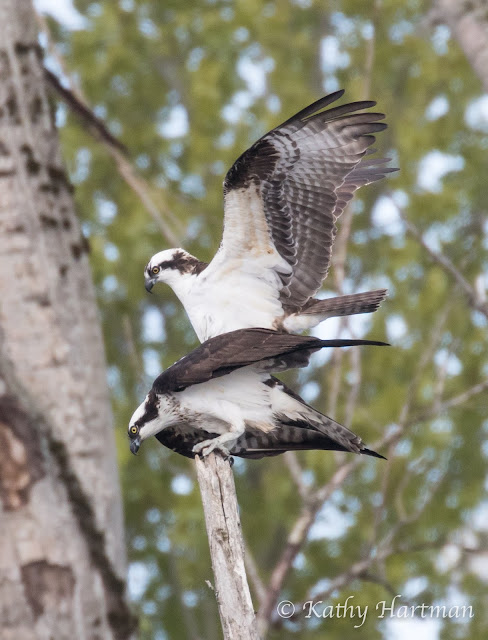 My friend Kathy Hartman caught them consummating their relationship the day before. We have to give Kathy credit, she may have been the first to photograph their baby-making in 2018. 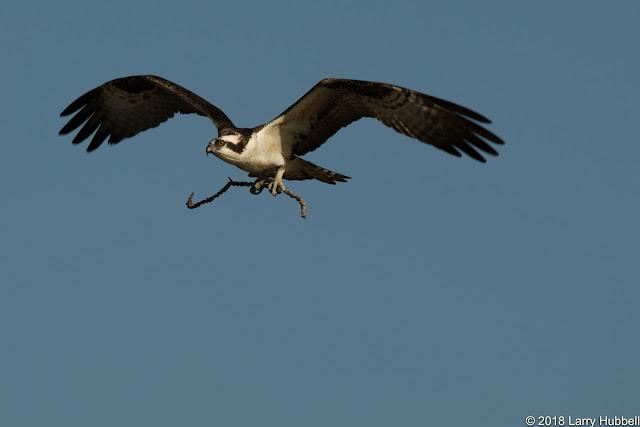 On Wednesday, I went back and watched as Chester began to seriously upgrade the nest. 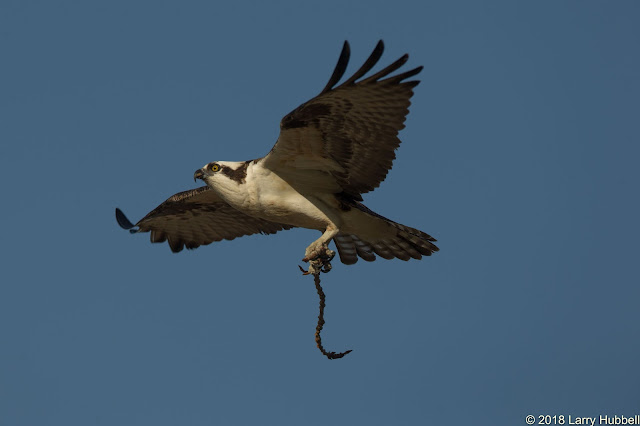 Often he was finding sticks or stalks near the water's edge. It seemed like he was looking for soft wet material. I wondered if this was intended to finish the nest. 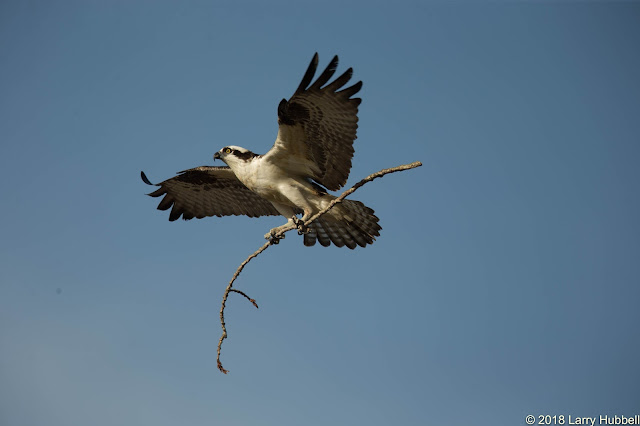 While watching Chester, I noticed that there were quite a few sticks on the ground below the platform. It made me wonder if last year's young blew the sticks out of the nest when they were pumping their wings prior to fledging. 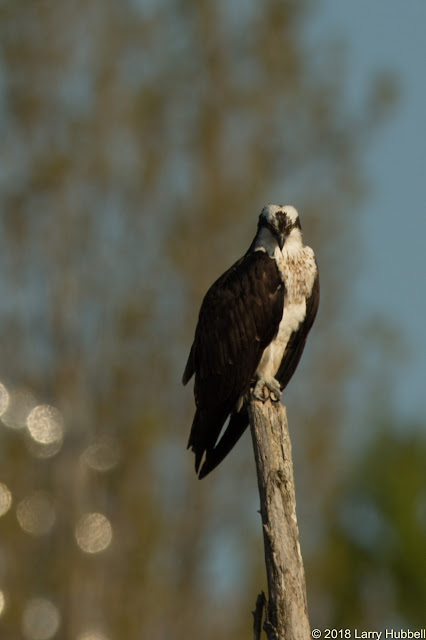 At some point, Lacey did a nest inspection with Chester, which was when I took the first two photos in this post. Ultimately, Lacey returned to her favorite snag above the pond. 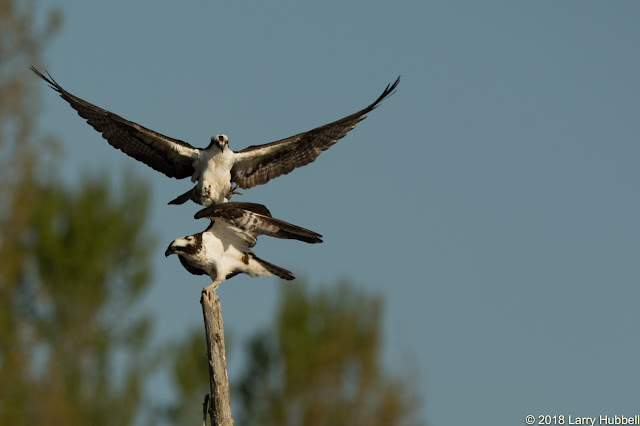 When Lacey leaned forward, Chester understood the invitation. We have to give Chester credit, apparently his noisy Air Dance is a highly functional part of osprey courtship. 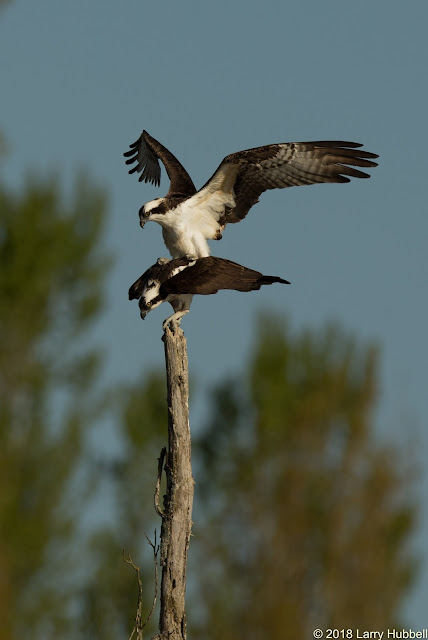 Clearly, Chester and Lacey are once again intent on raising young above Union Bay. In both of the last two years, I believe it was May 15th when Lacey went on-eggs. I am wondering whether this year, with more experience, she might beat the old date. The sooner she starts, the more time the young will have to gain strength before they must migrate south in the fall. It will certainly be fun to watch and see when incubation begins.

Have a great day on Union Bay...where Osprey raise young in the city! 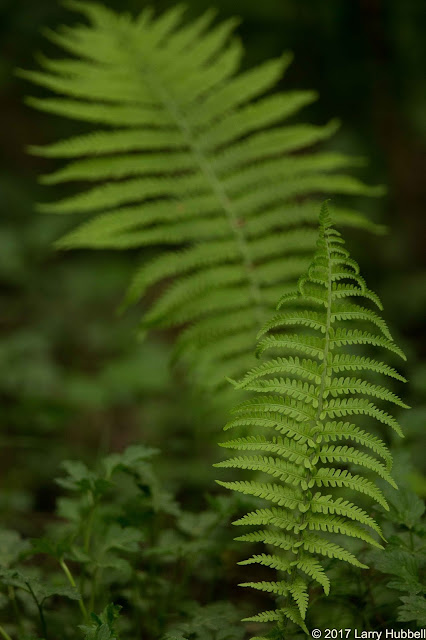 What species of fern is this? Is it native to Union Bay?


Scroll down for the answer.

Lady Fern: It is native across the continental United States. One of the primary reasons I believe this is a Lady Fern is the football or shield-like shape of the fern.

Posted by Larry Hubbell at 1:25 PM