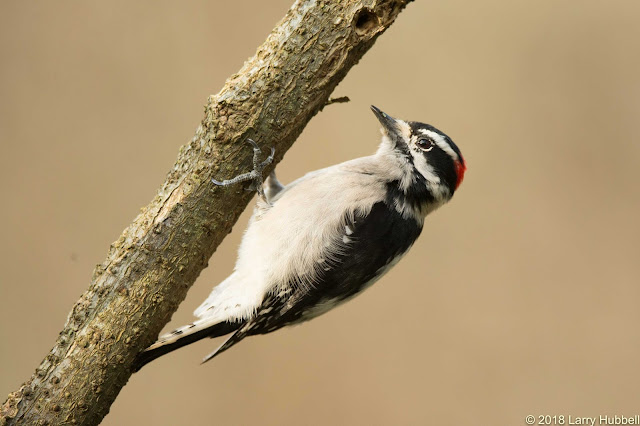 Every so often someone will ask, which bird is your favorite? This usually stumps me. I stutter and start without saying much. When I finally start speaking coherently, I often mention Pileated Woodpeckers or Bald Eagles or Osprey. I thoroughly enjoy these three species, but picking one of them makes me feel disloyal to all the others. As of this morning, I have decided that my favorite species is whichever one is in front of me. Currently, my  focus is on this well-groomed Downy Woodpecker. 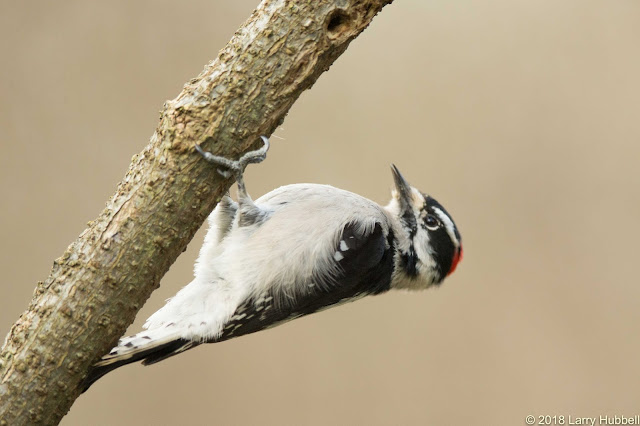 I photographed this little fellow in the Arboretum earlier this year. Downy's are so small that one of them could pretty well hide behind a dollar bill. The hint of red on the back of his head told me he was a male.

Compared to the average Downy in Western Washington, this bird seems abnormally white on its underside. I have been told their light-colored tummies reflect light into hidden nooks and crannies, which may help them locate their prey. 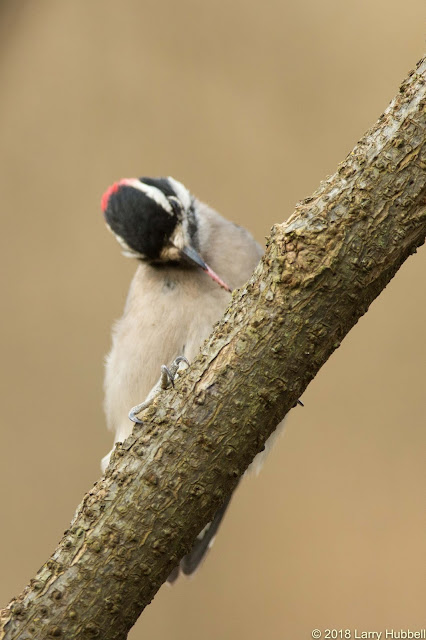 Here is a different male with a darker chest which is closer to the normal color in our area. East of the Cascades, Downy Woodpeckers often have the brighter white bellies.

It is interesting to see the tiny barbs on this woodpecker's tongue. Their specialized tongues help the birds reach deep inside a hole and extract whatever tiny creature it has been pursuing. 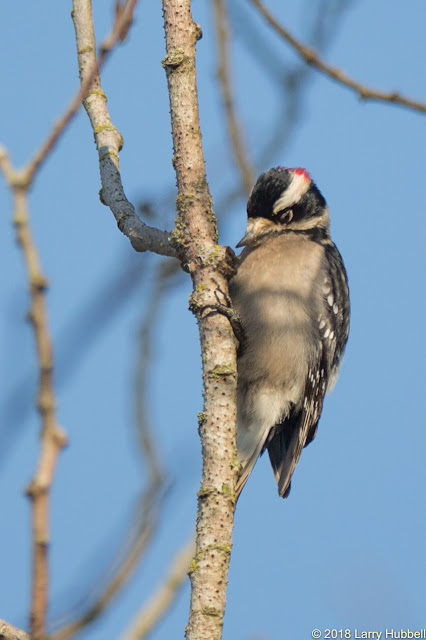 Here is another local example of a normal dingy Downy. 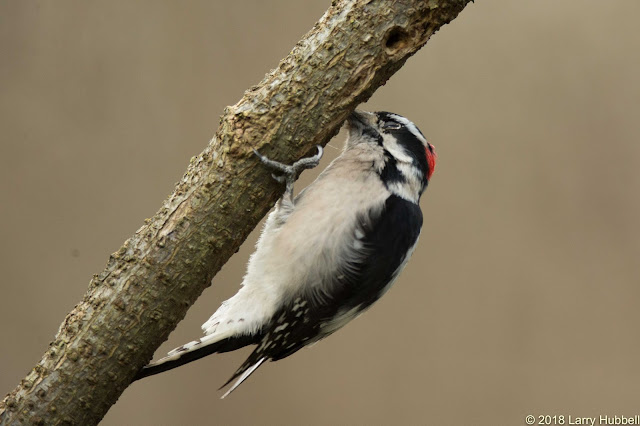 Returning to our flashy little hero, we find him deeply involved in his search for food. 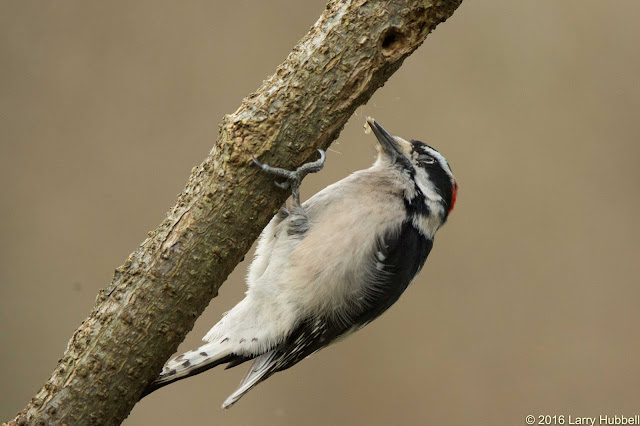 Usually the food which a Downy extracts is so small that it passes out of the tree and into the bird without seeing the light of day. I suspect, this wormy little morsel was larger than average. 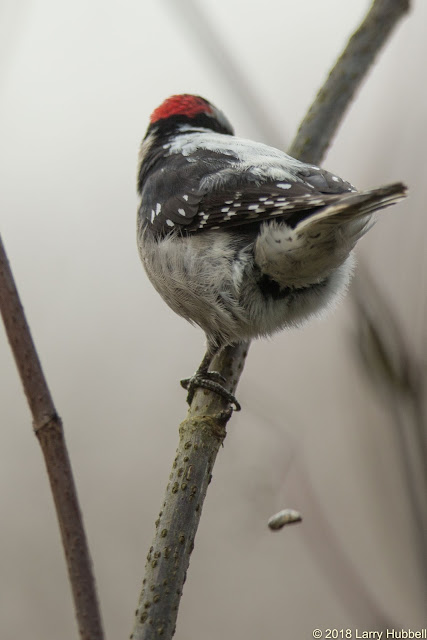 Like all creatures who eat, the process is 'First In, First Out'. More food requires more space. 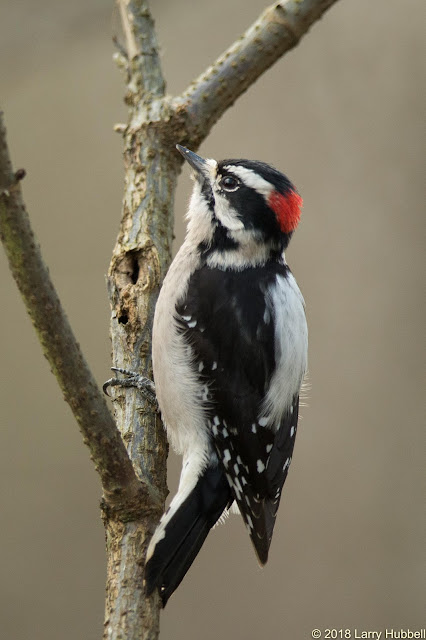 After which, our bird continued its highly focused search for sustenance. 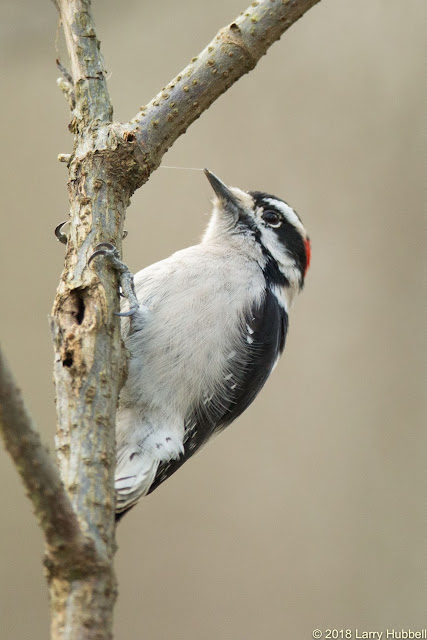 I suspect that once again our little Downy found food. But in this case, all we get to see is the thread of a sticky substance connecting the bird's bill to the tree. 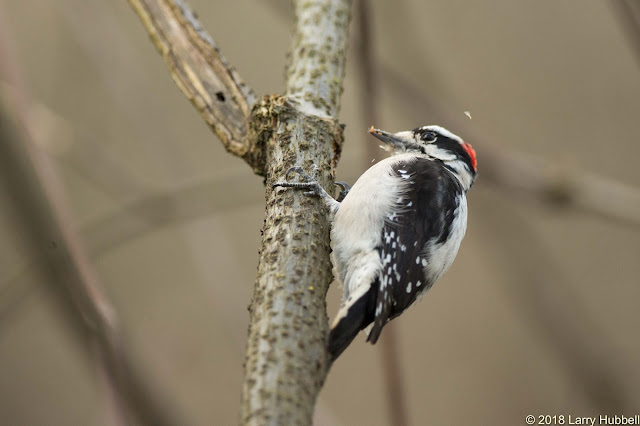 At the next location, our pint-sized hero allowed the chips to fall where they may. 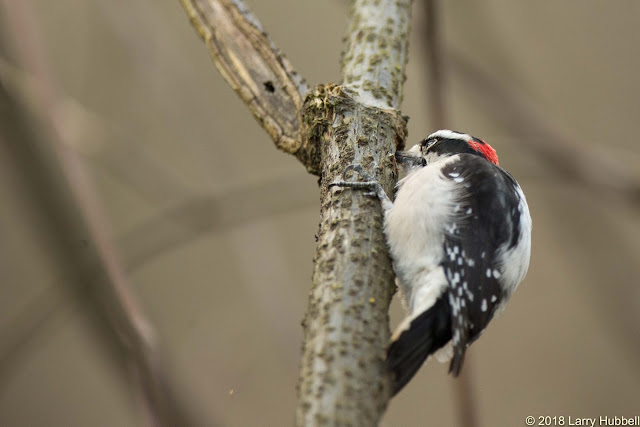 No doubt he could taste his prey, but he couldn't seem to get a grip. 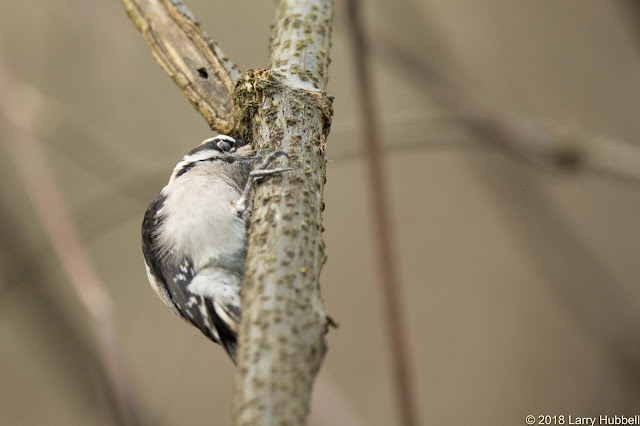 In a surprising change of tactics, the Downy switched sides. 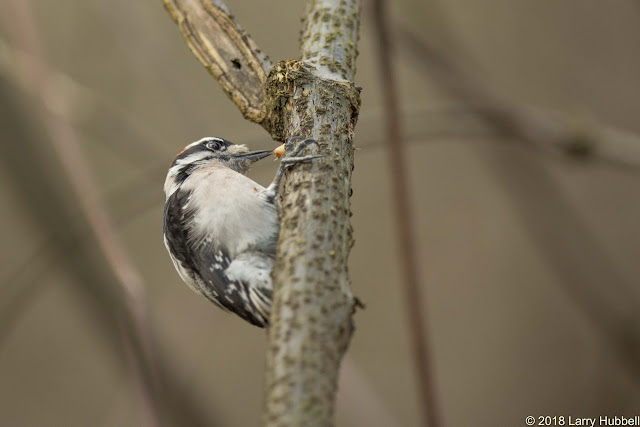 The creative approach paid off. 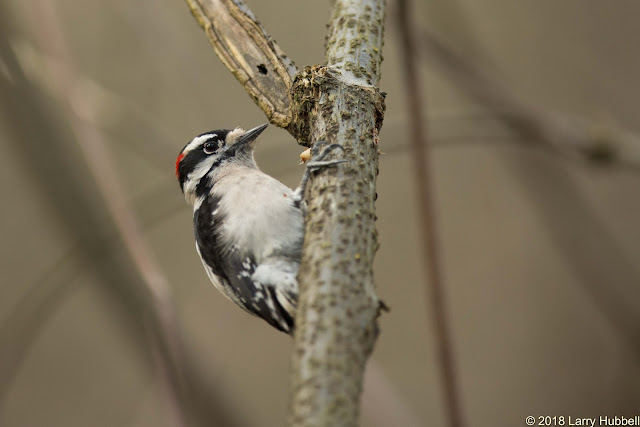 Our hero took a breather before undertaking the next challenge in the process. 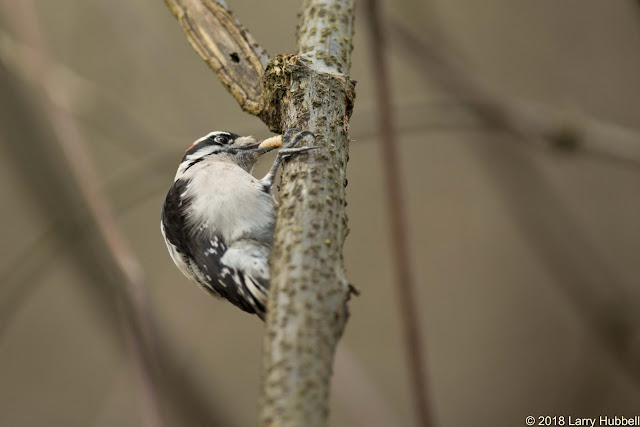 The little Downy found a feast. In the past, when I have seen a wood-boring beetle larva consumed by a woodpecker, the bird involved was a Pileated Woodpecker - our largest woodpecker species. 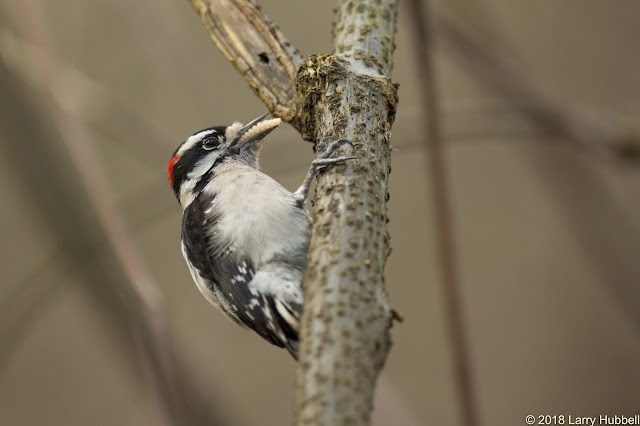 Never before have I seen a Downy Woodpecker - our smallest woodpecker species - consume anything this large. 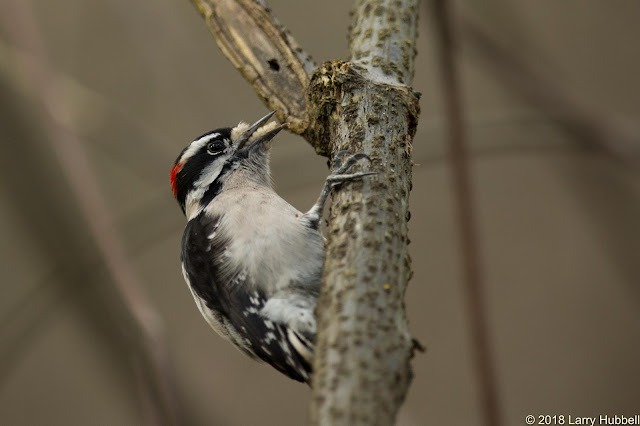 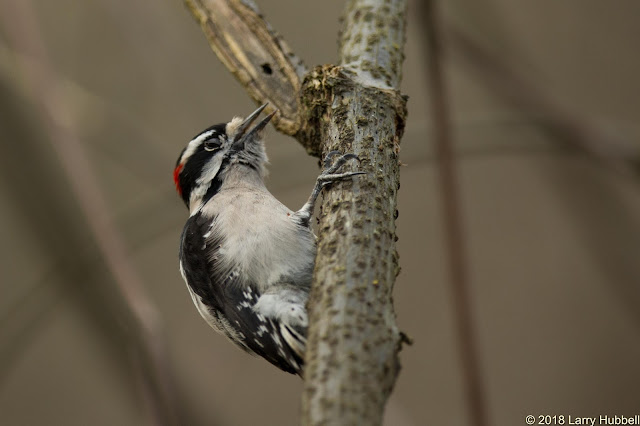 His effort is obvious. 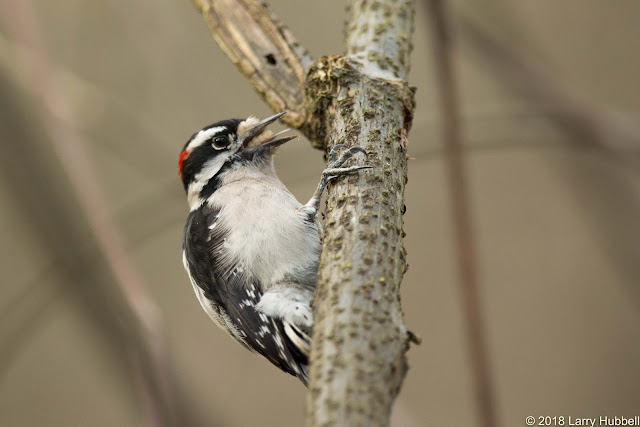 Unfortunately, the larva appeared to be stuck. Was it just a tad too big? 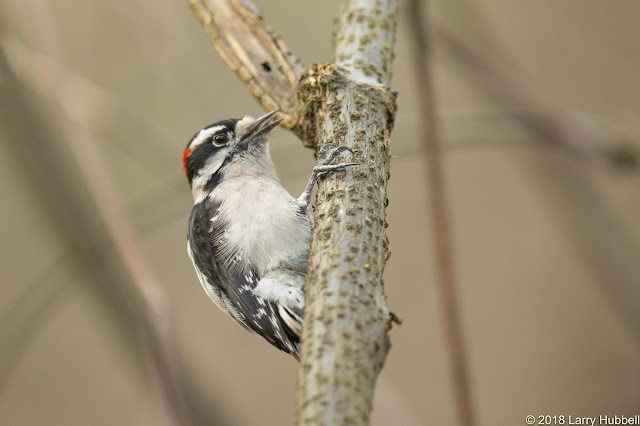 The Downy made a second effort. 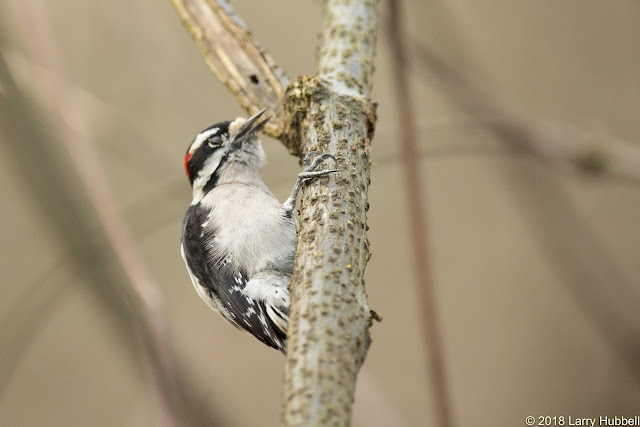 He even closed his eyes to focus on the task at hand. It almost seemed like swallowing this feast was a greater challenge than catching it. 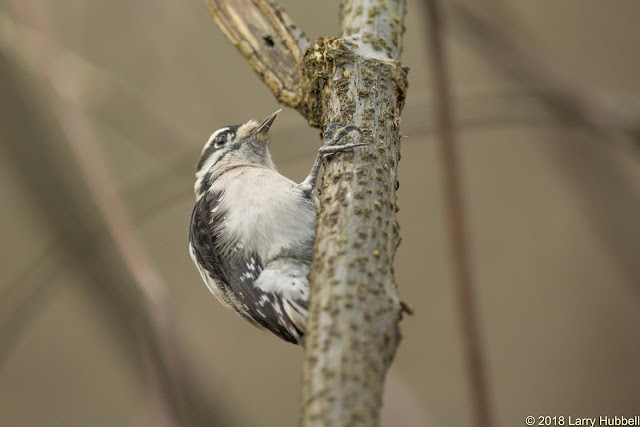 Ultimately, the Downy prevailed. I am uncertain if his tongue hanging out indicated exhaustion or not. In any case, I bet he felt like he just ate a Thanksgiving Feast.

Downy Woodpeckers prefer to forage among deciduous trees, often near water. In this case, our hero was working in a large elderberry, which I would normally consider a shrub. Not surprisingly, I found this bird fairly close to Elderberry Island.

Also, Downy Woodpeckers generally nest in dead trees where the wood has started to decay and turned soft. I have seen them nesting in dead Alder trees. Often, the chosen trees were only half-grown at the time of their demise. Given the petite size of Downy Woodpeckers, medium-sized Alders are not a problem.

If you or your offspring might someday enjoy sharing your lives with Downy Woodpeckers, and especially if you have a home near water, you might try investing in Elderberries and Alder.

Next weekend, the 2018 City Nature Challenge begins. This looks like an exciting opportunity to find and identify the lifeforms which surround us. My friend Kelly Brenner, author of The Metropolitan Field Guide, did the challenge last year and highly recommends it. This will be my first chance to participate. Click Here to learn what all the excitement is about. 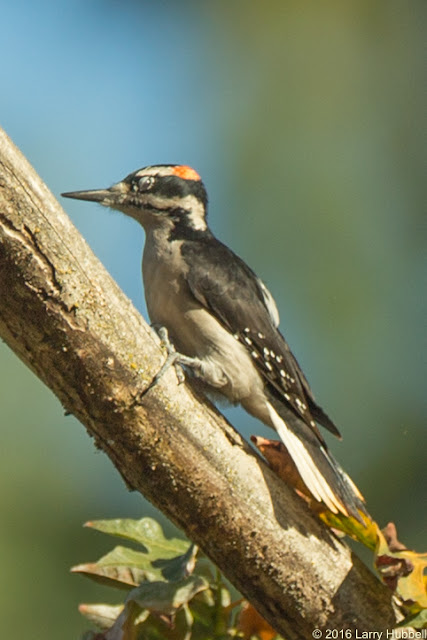 What species of bird is this? Is it native to Union Bay? Does it differ from our hero?

This was a bit of a trick question. The bird above is a Hairy Woodpecker. Downy and Hariy Woodpeckers are very similar. They are both native to our area. I photographed this bird two years ago in the Arboretum. Hairy Woodpeckers tend to reside among mature native trees, often coniferous, unlike the Alder and Elderberry where we find Downy Woodpeckers.

We should be aware that when we cut down large native trees we are eliminating preferred habitat for a variety species. Hairy Woodpeckers are an example of a native species which loves our mature native forests.

Hint: For both species, compare the relative size of their bills with their heads.

My email address is LDHubbell@comcast.net
Posted by Larry Hubbell at 8:31 PM