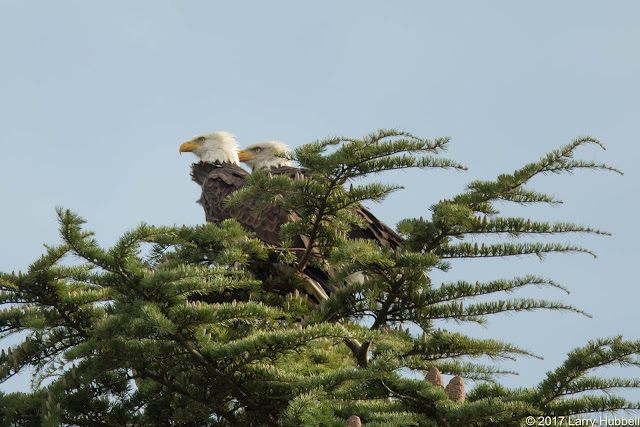 In early December, I thought these two eagles were the established pair usually seen on the 520 Bridge - Eva and Albert. The day after I posted this photo, I was surprised to see three pairs of mature eagles on Union Bay. Eva and Albert were on Foster Island where they often spend time. The Talarus pair were in their usual winter cottonwood, just east of Husky Stadium. Plus, this pair was once again sitting just north of the Waterfront Activities Center.

Since 2011, when I started paying attention, there have been just two Bald Eagle nest sites on Union Bay. The Talarus nest, north of Yesler Swamp and Eva and Albert's nest in Broadmoor Golf Course. The nest which Eva previously shared with Eddie the Eagle. I wondered if there might be a new permanent pair of eagles on Union Bay. 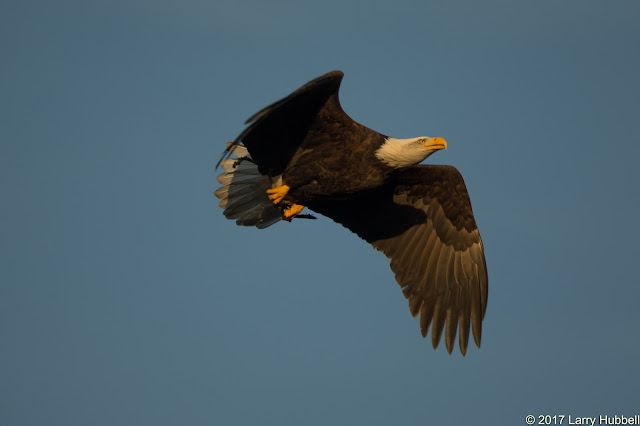 The next day, when I saw an eagle carrying a stick across Montlake Cut, their intentions were confirmed. 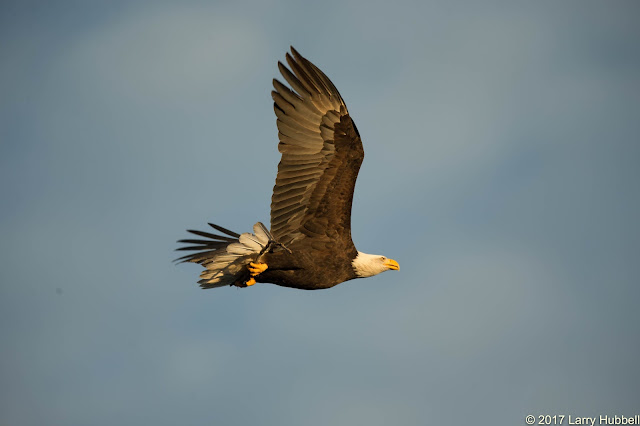 Both, the larger female... 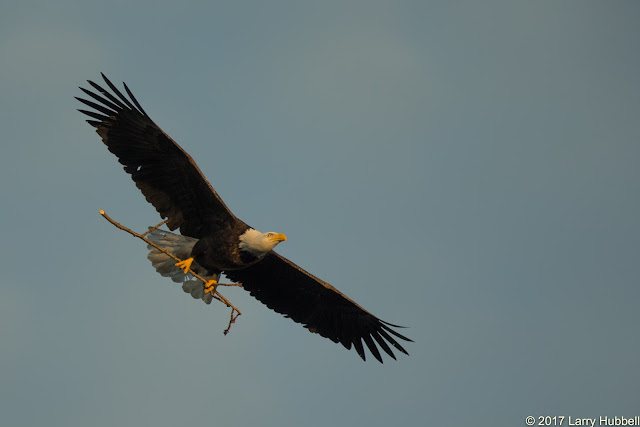 ...and the smaller male were heading for the south side of Montlake Cut. 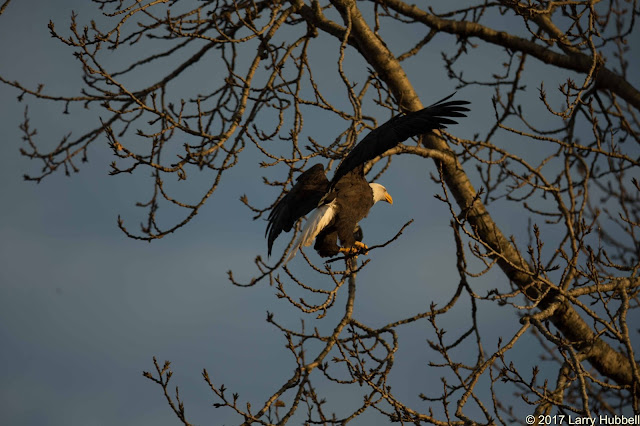 They were taking turns flying into the cottonwood tree behind the totem pole on the southeast corner of The Cut. 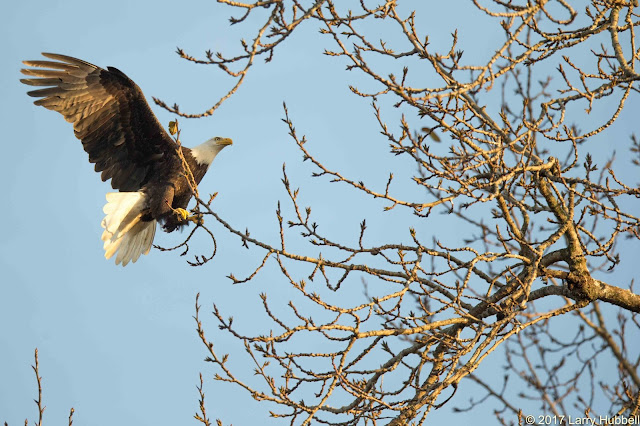 First one and then the other would bring in the soft budding branch tips from nearby cottonwoods. 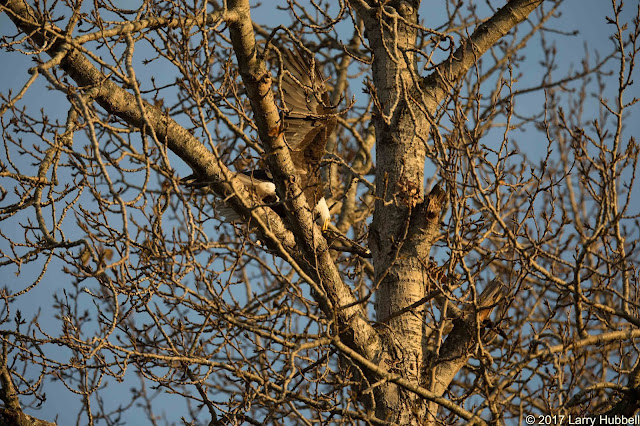 After negotiating their way through the outer foliage, the eagles would attempt to balance the branchlets in a fork high above the ground. There was only one medium-sized branch and a smaller twig which stayed in the tree at this early point in the process. 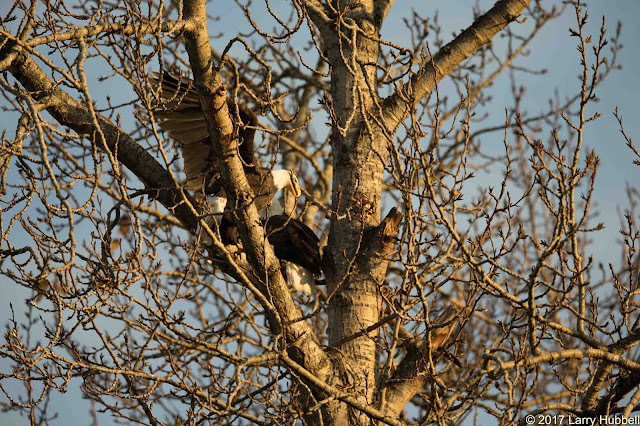 Getting the new nest started was quite a challenge. The area beneath the tree was nearly covered with the spongy soft cottonwood leads. I never saw the eagles attempt to pickup any of the fallen branches. They would just fly over and break off another fresh one. Also, the eagles did not appear to remove any branches or twigs from the nesting tree. I wondered if they understood that the living branches surrounding the nest would eventually provide leaves, shade and protection for their future family. 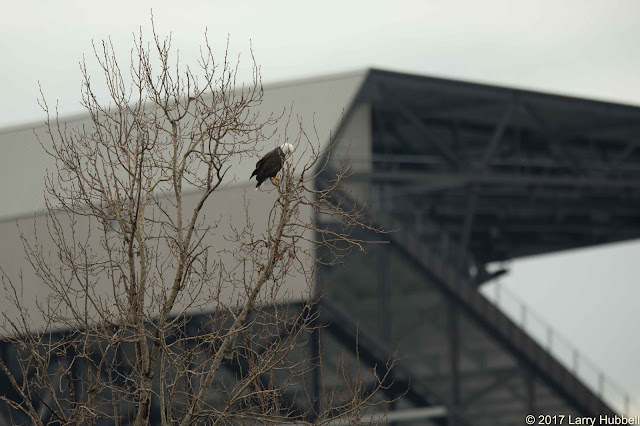 Usually they would fly to the north side of The Cut for building materials. 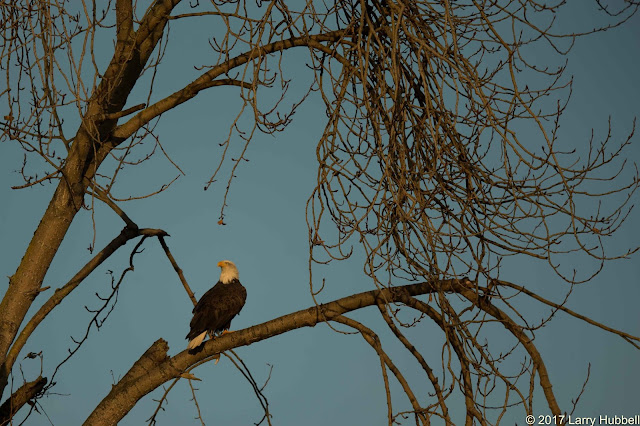 It was quite obvious when the eagles were evaluating which branch to select. 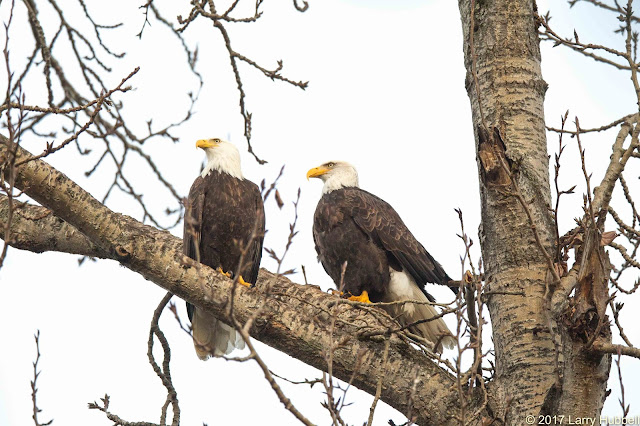 Progress was slow, at least when compared to most other types of birds. I soon realized that watching a pair of eagles build their first nest was a unique opportunity, given that eagles normally reuse their nests. Since eagles mate for life and they can live for decades first nests can be few and far between. If this is a first nest, then it is most likely their first breeding season and their first attempt at establishing a territory.

If we want to live in harmony with are new avain neighbors it is important to get to know them. One of the first things we do with new human neighbors is to introduce ourselves, learn their names and what they do. Finding names for this new pair of eagles felt like a logical next step to me, but none came to mind.

To make matter worse, identifying individual eagles is difficult, some would say nearly impossible. Only when they sit side-by-side is their size difference obvious. As time passed I did begin to see subtle differences in their eyebrows. I think the female (above on the right) has a slightly heavier brow. She looks a bit more serious to me. 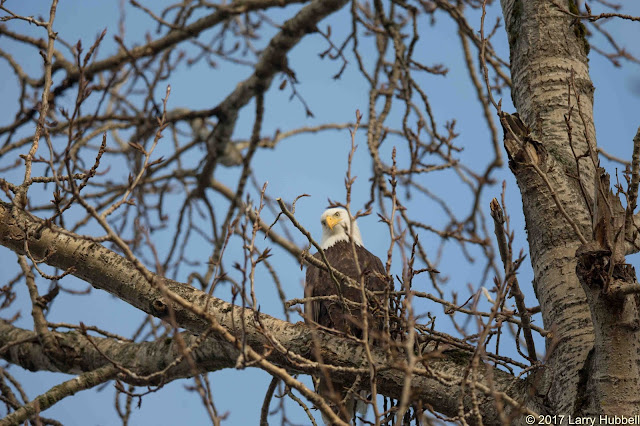 Two weeks later, maybe a dozen pieces had been added to the nest. There was progress, but it was slow.

At this point, I was beginning to understand the shape and scope of their new territory. In the past, the Talarus pair of eagles controlled the northwest half of Union Bay, while the 520 pair patrolled the area to the south and east. The dividing line seemed to run between Marsh and Foster Islands and angle off across the bay heading north by northeast.

The northern border of the new eagle territory starts just south of Husky Stadium. It includes Marsh Island to the east, Kingfisher Cove to the southeast (Click Here to see my Union Bay map) and apparently all of Portage Bay to the south and west. I suspect the boundary negotiations will continue over time. 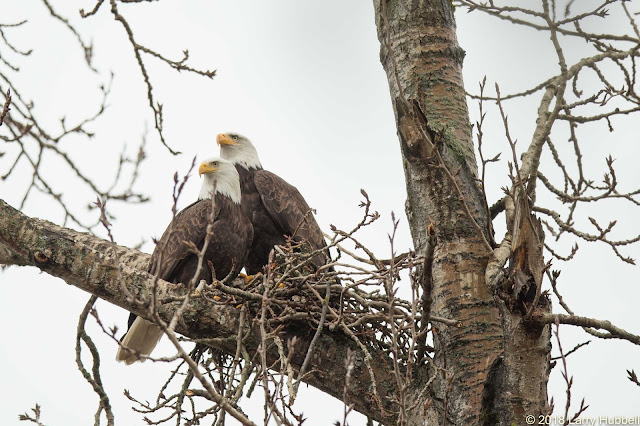 It has been especially fun to watch the eagles verbally defend their new territorial alignments from each other. It is clear that Montlake Cut and Marsh Island now belong to the new eagles. This fact of ownership inspired an idea for their names, Monty and Marsha.

By early in January, the nest appeared to double in size, though it was still way too small to be functional. 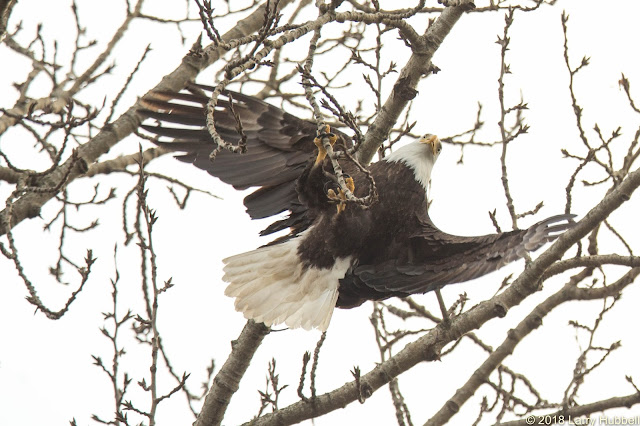 With stubborn branches, Monty sometimes had to fully commit to the removal process. 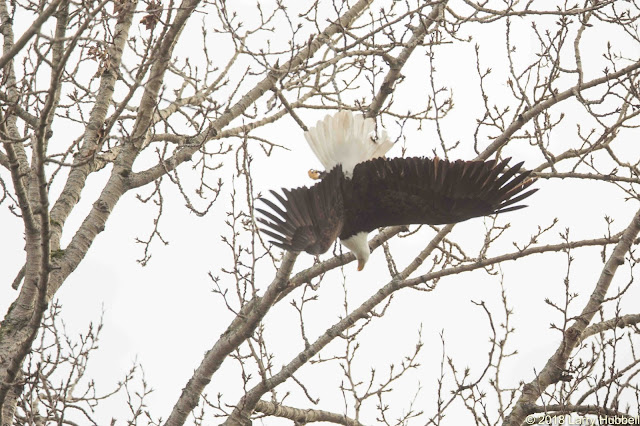 This could necessitate some tricky maneuvers when gravity kicked in. 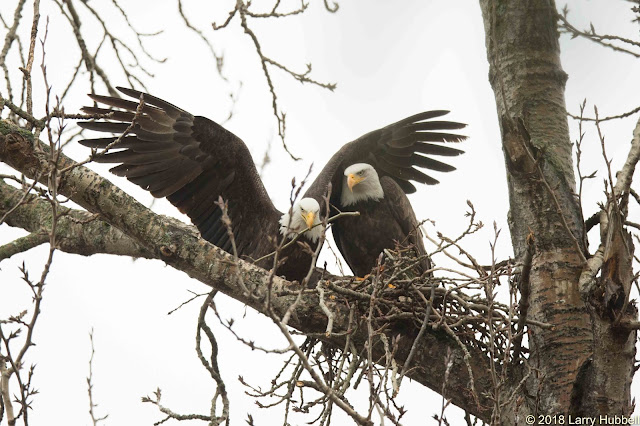 Sometimes Marsha could be a bit indifferent while Monty struggled with the placement of branchlets and twigs. 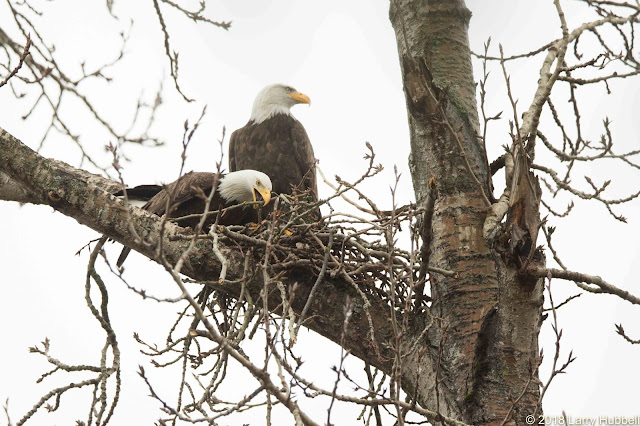 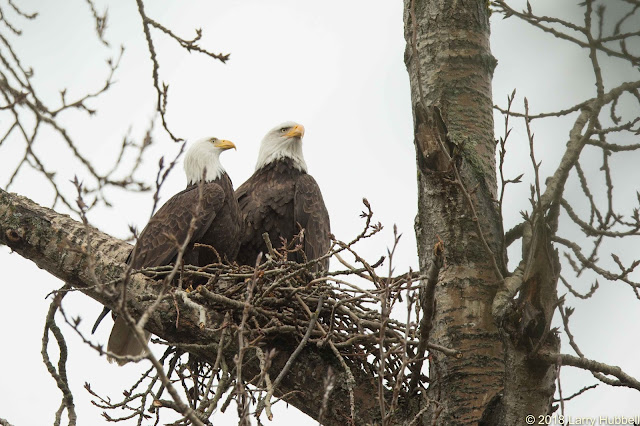 Even though the progress was slow, Monty seemed to take pride in his efforts. 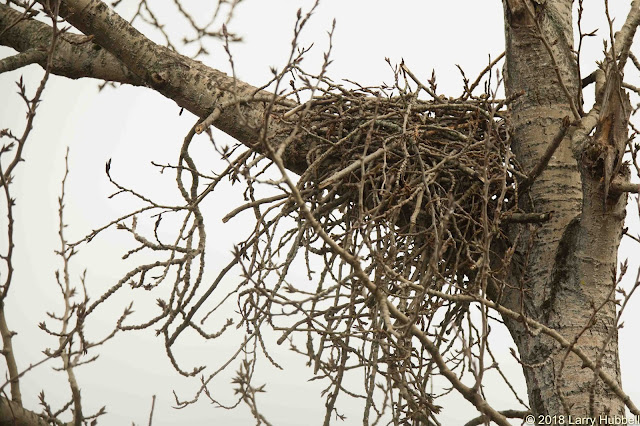 By early in February, the nest was looking significantly more substantial. 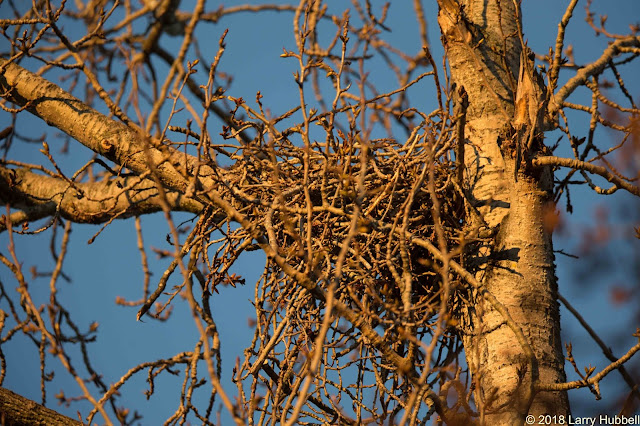 By early in March it was hard to pick out the original stick.

On March 9th, Eva - the female in the Broadmoor nest - began setting on eggs. Monty and Marsha's nest still looked a bit undersized. Neither of the new eagles were acting like there were eggs in the nest. I was starting to worry about their prospects for parenting in 2018. 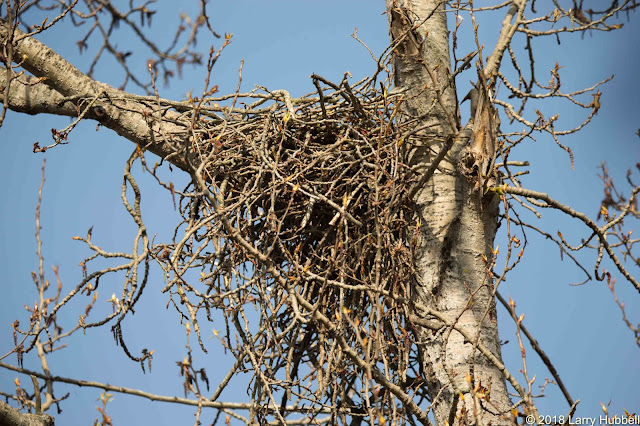 By the end of March, the nest was definitely getting more impressive. 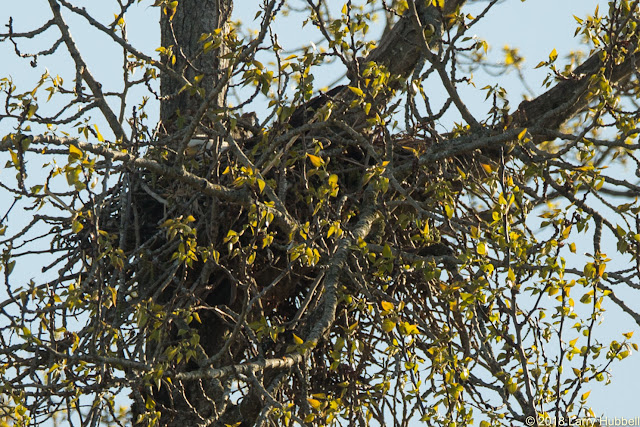 In early April, I started to get the feeling that Marsha and Monty might actually be on eggs. Even though neither of them were visible in the nest, I realized that this did not mean they weren't there. When eagles are on eggs they usually sit very low in the nest. Their white heads may only be visible from a distant angle. I began backing away from the nest, but still I saw nothing.

I retreated to Montlake Bridge. Even at that distance neither eagle was visible in the nest. I crossed to the north side of The Cut and then slowly worked my way east. I stopped every few steps to take a photo and enlarge the image, hoping to catch a glimpse of an eagle. Finally, at the northeastern tip of The Cut I hit pay dirt.

If you look closely at the photo above, directly in front of the trunk of the tree, you can see the white head of an adult eagle. Eggs are under way! 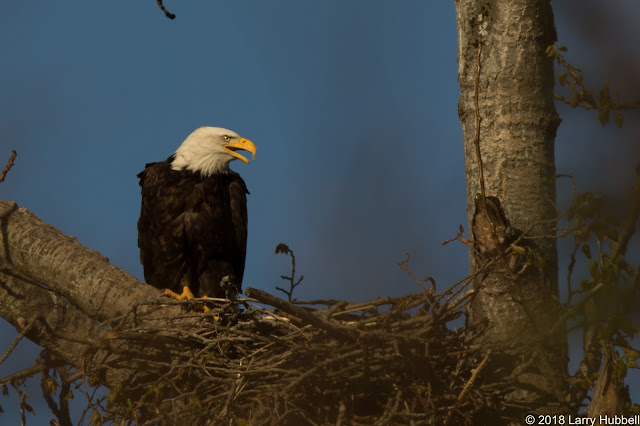 As I headed for home, I saw Marsha come in and land at the nest. She sat for a few moments and then called out. 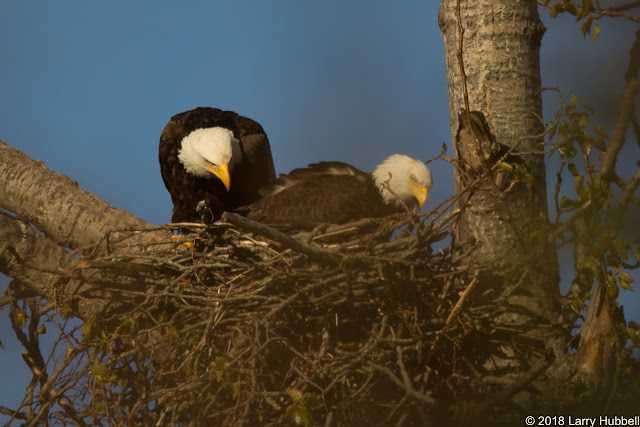 Apparently, in eagle-speak she said, 'Time to get up. It is my turn on the eggs!' 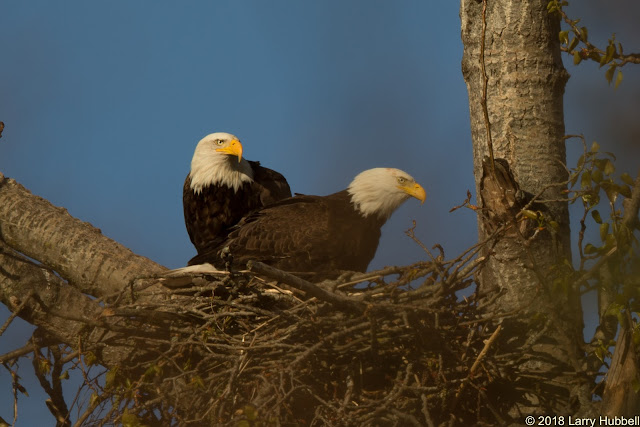 Being the smaller of the two, Monty did as directed. 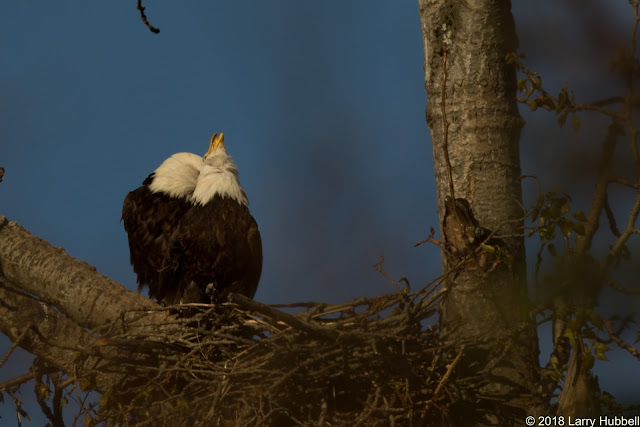 I have no idea what Monty was crowing about, but his tone seemed to imply, 'These are my pride and joy, first of my line and our future offspring. Oh, What a mighty eagle I am!' 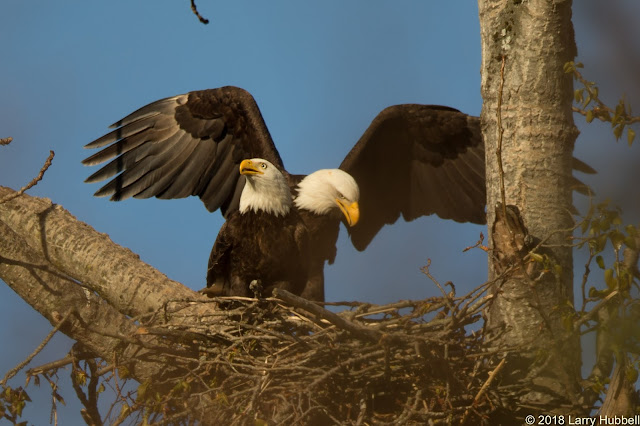 No doubt Marsha understood whatever Monty said, but her obvious focus was on the care and well-being of the eggs. I suspect she was thinking, 'Yes, Yes, Just move along Monty.' 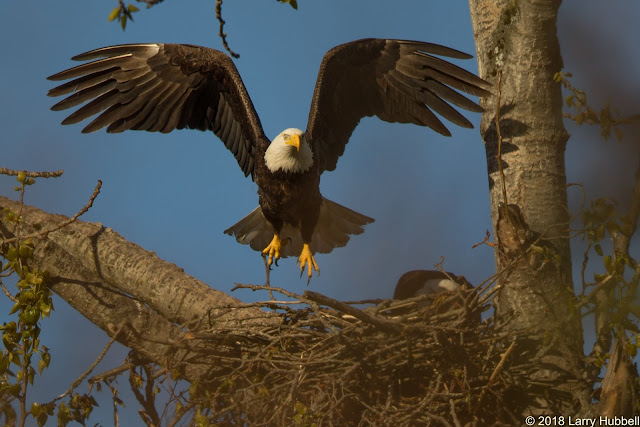 As Monty took to the air, Marsha settled in on the eggs and I wondered, How will our new neighbors handle the festivities on the first day of boating season.

Have a great day on Union Bay...where eagles nest in the city!

ps: If my calculations are correct, boating season and the new eaglets will arrive at just about the same time. 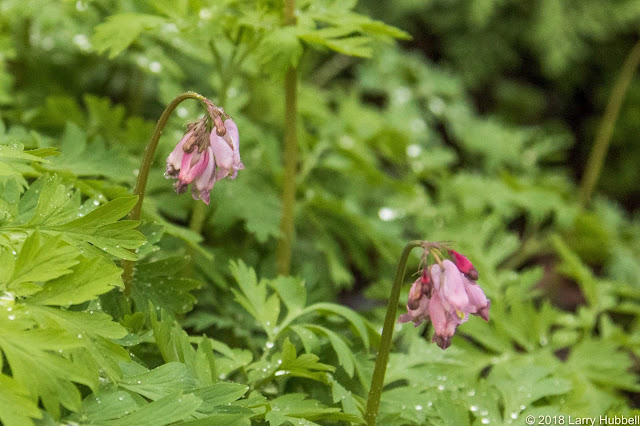 Do you know this flower? Is it native to Union Bay?

Pacific Bleeding Heart is a native flower. Click on the name to read more about this plant and its uses.

My email address is LDHubbell@comcast.net
Posted by Larry Hubbell at 12:35 PM