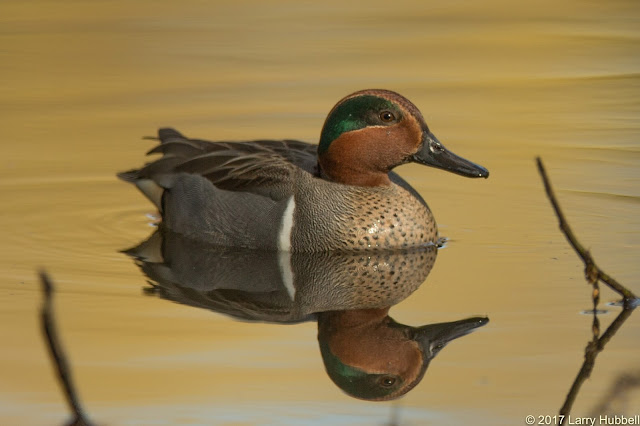 The males ducks of this species are not easily confused with male Mallards. They do both have green on their heads, but otherwise they are fairly different in color, patterns and size. (As a comparison, the background bird in the next photo is a male Mallard.) 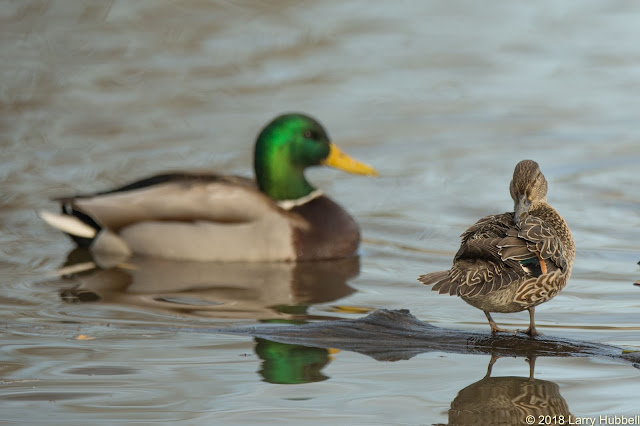 Still, Mallards are so common that they are the gold standard for ducks. Without even trying, we tend to compare other species with Mallards. When small ducks resemble Mallards they are occasionally assumed to be young Mallards. The 'baby duck' on the right is actually a fully-mature female. 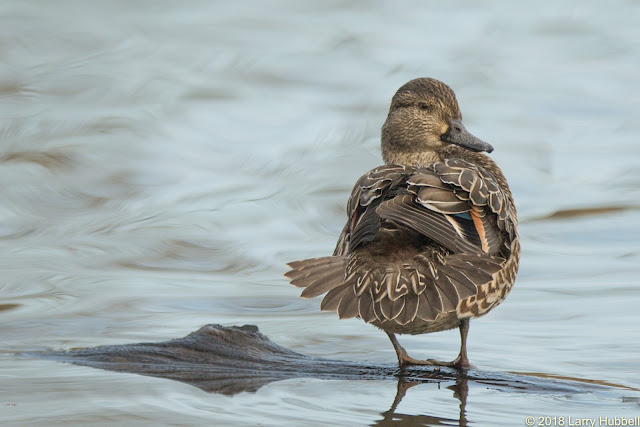 This species also behaves similar to Mallards. For example, this small duck climbed up onto a log to do a little preening and cleaning 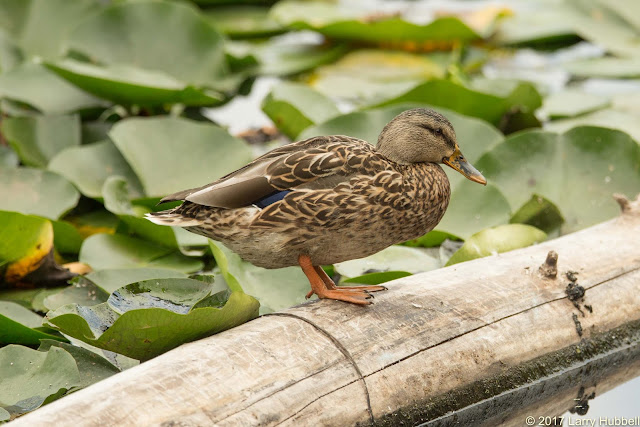 Ignoring their size differences, how can we distinguish between a female Mallard, like this one, and... 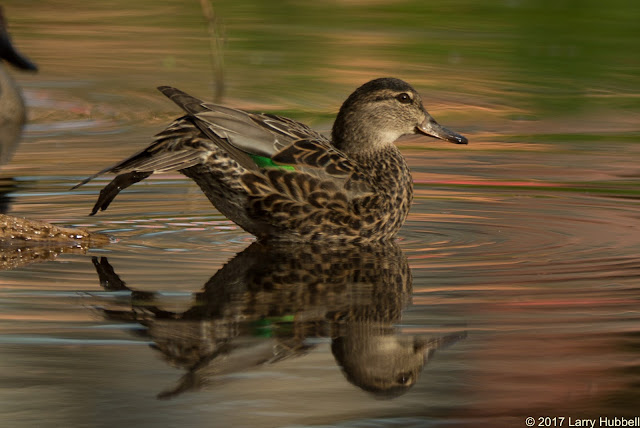 ...a female of our 'baby duck' species. In regard to colors and patterns, the females have more similarities than differences. It is easy to understand how a casual observer might mix them up if the size difference was not readily apparent.

In the winter, we often find this petite species sitting on logs next to Mallards. The smaller birds do not seem particularly intimidated by the larger ducks. No doubt this contributes to their being perceived as younger members of the same species.

During the colder months, we should remember that by the end of autumn young birds have generally grown to the size of their parents. I suspect that attaining an adult size helps young birds to survive the challenges of winter. 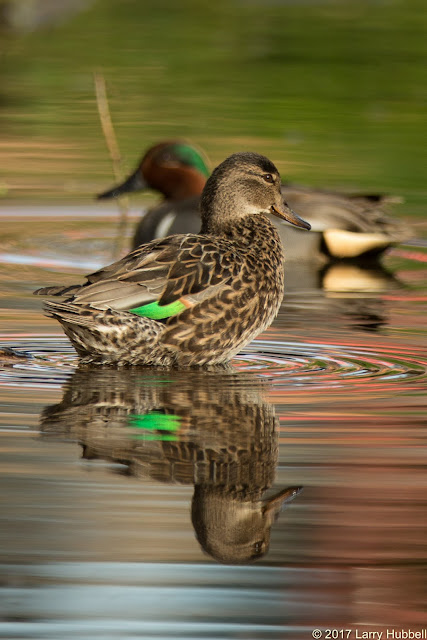 A fairly obvious difference between the females of these two species, beyond size, is the color of their speculums. When the smaller birds lift their primary wing feathers they expose patches of brilliant green. 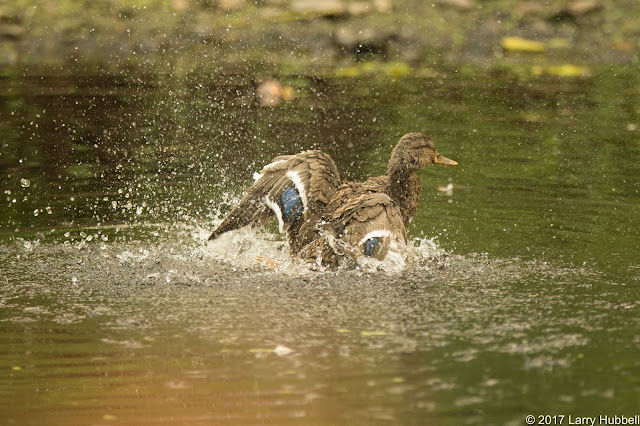 Mallards have purplish-blue speculums with white borders.  Female Mallards also have a bit more orange on their bills and completely orange feet. 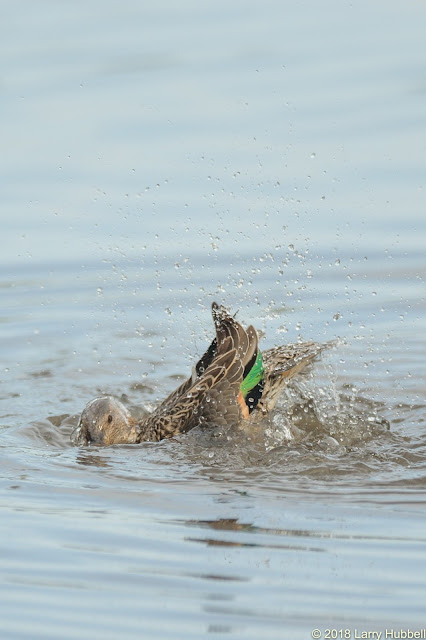 It seems very appropriate that the birds of our miniature species are called Green-winged Teals.

I find it fascinating in this photo how water can momentarily form a helmut over the head of bathing birds, just as they are breaking the surfacing. 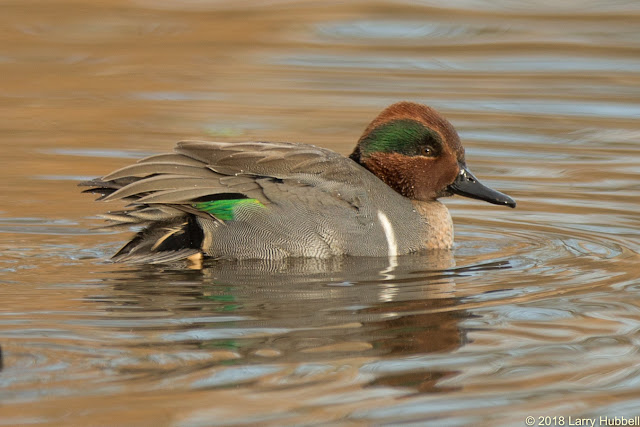 The speculums of the males of both species have the same colors as their respective females.

Another similarity between Mallards and Green-wing Teals is both species are dabbling ducks. They primarily search for food by sticking their heads under water, while waving their bums in the air. This is opposed to diving ducks, who do their shopping while completely submerged. 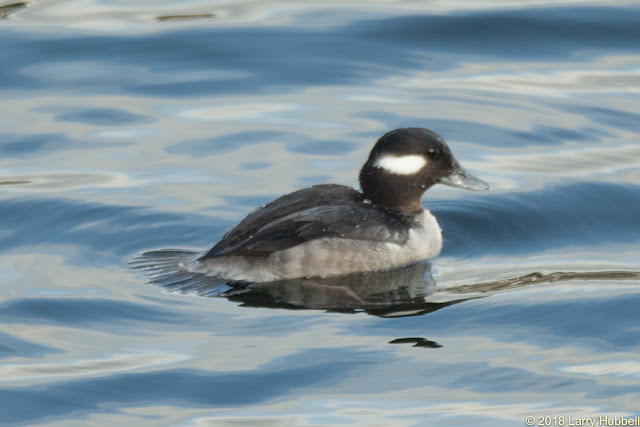 This small, similarly-sized mature female belongs to a species of diving ducks. Sometimes they are also assumed to be baby ducks. In this photo, the female is preparing to dive. She will push down on the water with her tail in order to thrust herself below the surface. 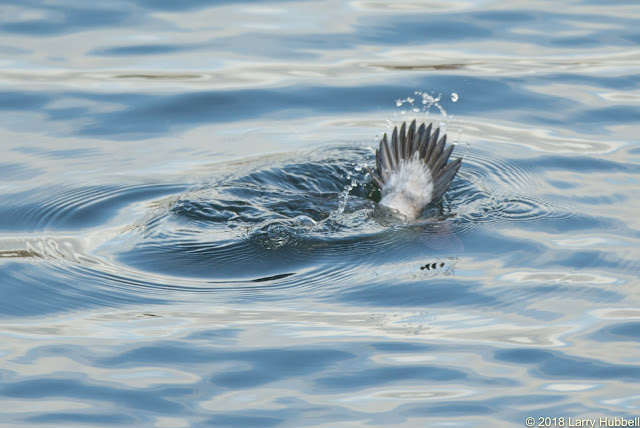 A split second later, as she disappears, we can still see the imprint of her tail on the water. 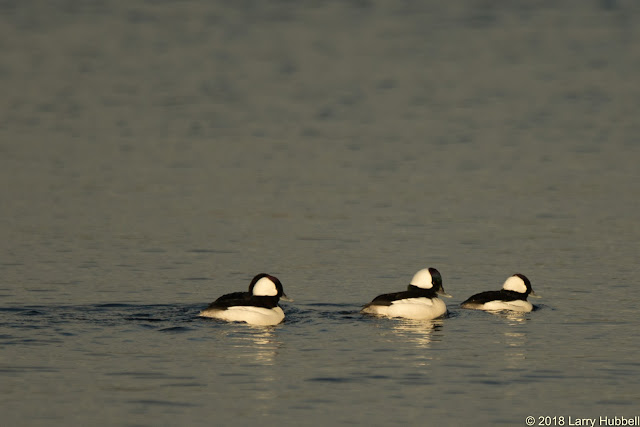 The males of this species are so strikingly unique that they are less likely to be mistaken for baby ducks. 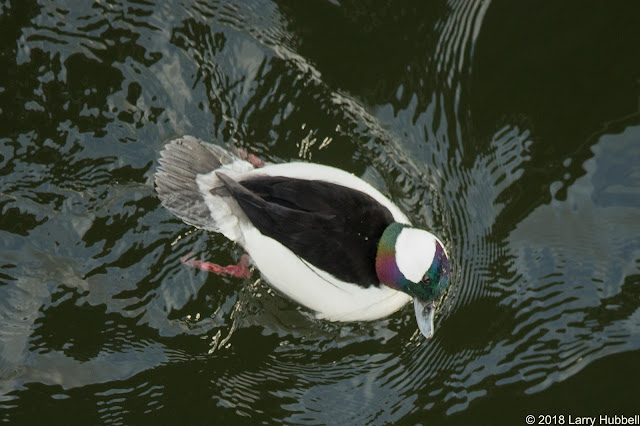 This photo, taken from the new 520 Bridge Trail, shows one of the males from a top-down perspective. Here again you can see how the tail will be utilized as a 'diving platform'. You might also note the refractive properties that have dramatically changed the color of the dark head feathers.

The members of this species are called, Buffleheads. Which may be a reference to the fact that their heads can appear rather large for their bodies - similar to the way a Buffalo has a disproportionally large head. 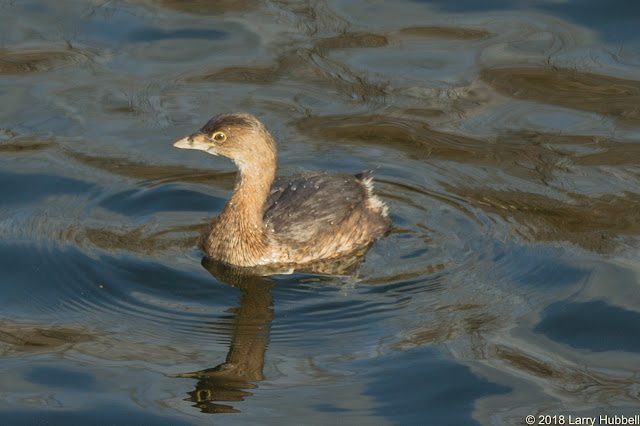 Our third and final miniature water bird is neither a baby or a duck. The name for this species is, Pied-billed Grebe. Their name refers to the fact that their bills have two different colors. Like Buffleheads, this species searches for food underwater. 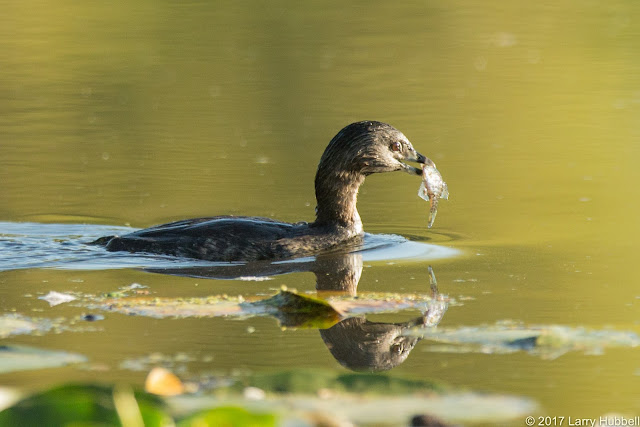 Unlike the Buffleheads, Pied-billed Grebes tend to come to the surface to consume their catch. Grebes eat primarily fish. Buffleheads tend to swallow smaller creatures, like dragon fly larva, while fully submersed. I suspect a Grebe's bill is much stronger and better able to catch and hold a fish. 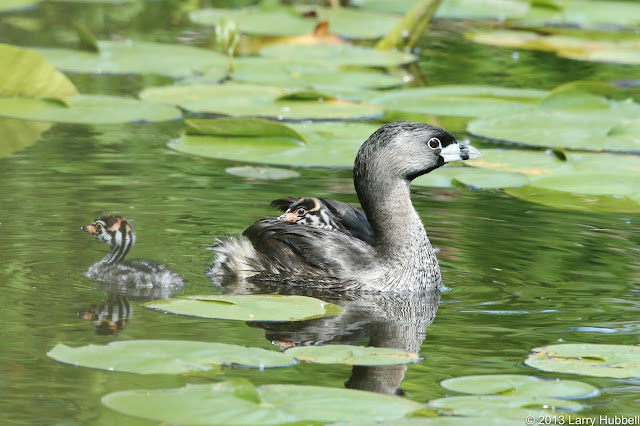 Have a great day on Union Bay...where small winter birds are seldom babies!

Are the grebes and the water lilies in these photos native to Union Bay?


Scroll down to see the answers!

A) Pied-billed Grebes are native to Union Bay
B) The Water Lily (Nymphaea Orodata) is an invasive weed.