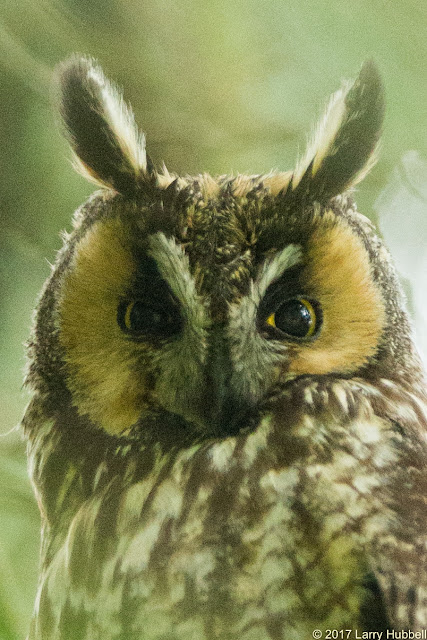 Congratulations to Kelly Brenner, avid naturalist and author of the Metropolitan Field Guide. Once again, Kelly has located a species of owl rarely seen in the Arboretum. This week, with the assistance of some noisy jays, Kelly found this long-eared owl. The first and only one I have ever seen in the Arboretum!

Can you guess why the name, Leo, popped into my mind? 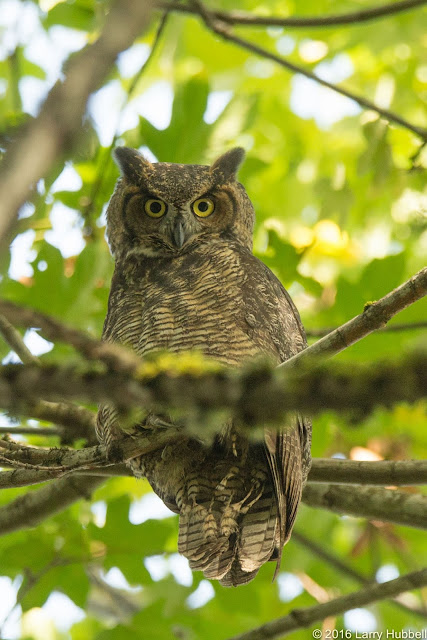 Last fall, Kelly found this great horned owl in the Arboretum. These two owl species may look superficially similar but they are actually quite different. The long-eared owls weigh less than a pound while great horned owls can weigh a number of pounds. My Sibley-Guide says, great horned owls weigh-in at just over three pounds, while All About Birds indicates they may weigh as much as five pounds.

In both species, the feathers on their heads are not ears or horns. If what I have read is correct long-eared owls have earholes located asymmetrically, on opposite sides of their heads. The off-kilter positioning enables then to pinpoint sounds with a high degree of accuracy. The great horned owls apparently have ear holes which are located relatively close to the same position on either side of their heads. You can read more and see photos related to owl ear research at, The International Owl Center. 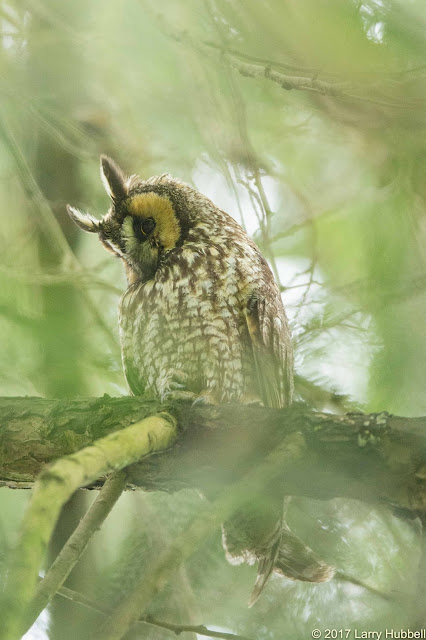 Being a much smaller creature, Leo would make a nice snack for a great horned owl... 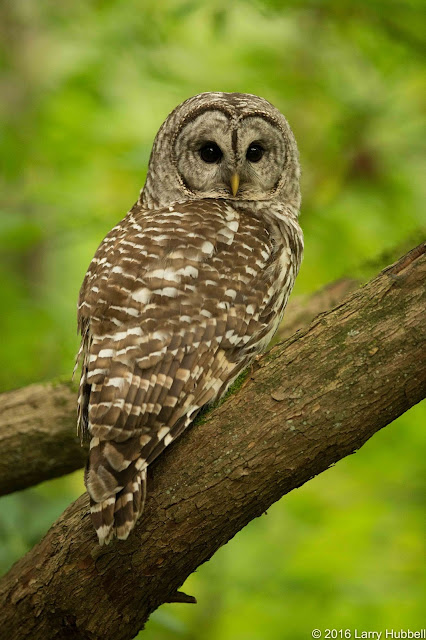 ...and possibly a complete meal for one of our local barred owls. Barred owls weigh approximately fifty percent more than Leo. 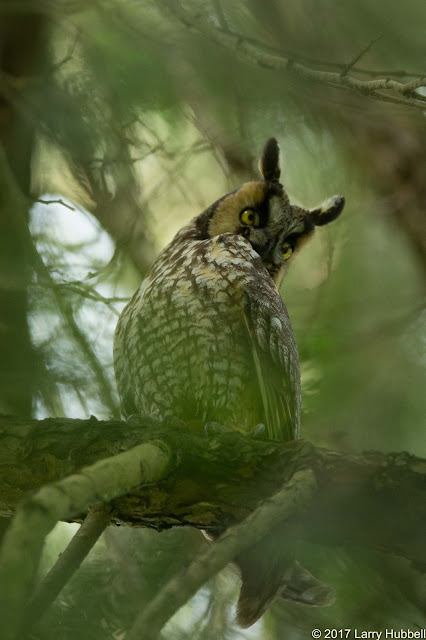 This may explain why Leo looked and listened carefully at the source of every little sound. 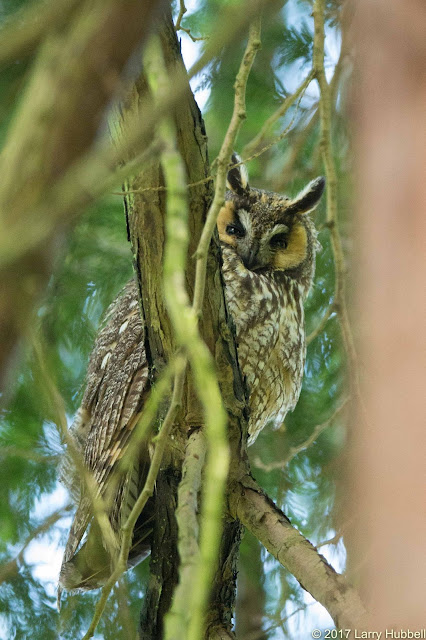 It may also explain why Leo chose to roost deep within the branches of a western red cedar. This location insured that any significant predator would have to make a quite a racket if it tried to approach Leo. 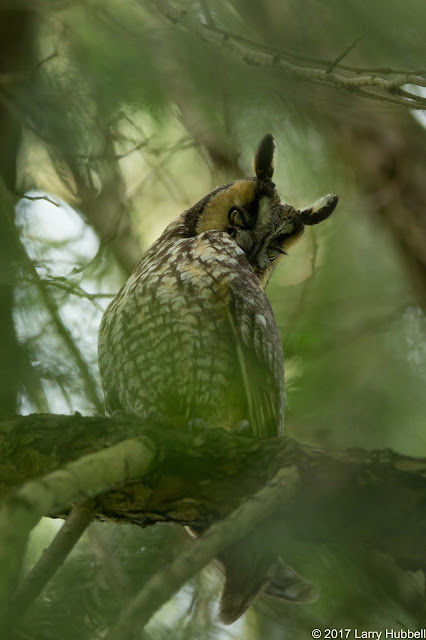 Even with small children playing in the vicinity Leo still found time to relax. 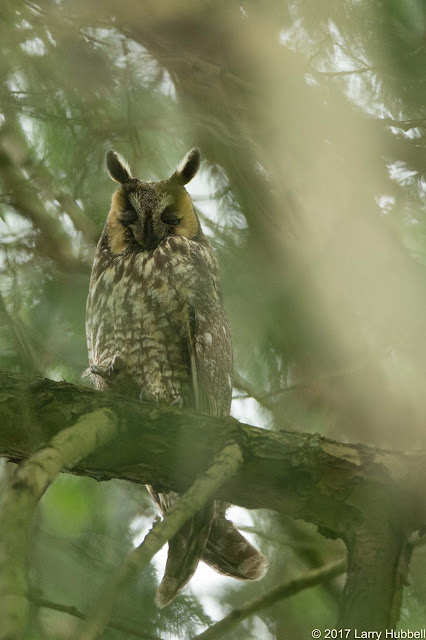 Sometimes, both eyes were closed. 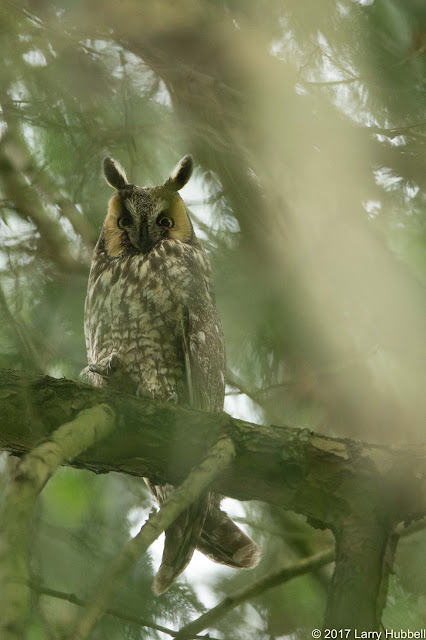 Sometimes, they were wide open... 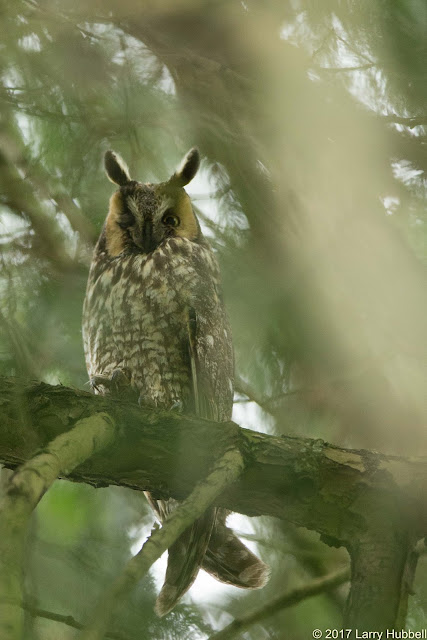 ...and sometimes, Leo got by with the sight from a single eye. 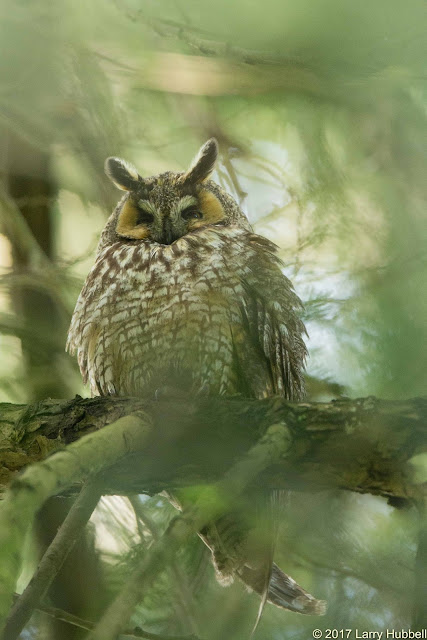 Occasionally, Leo fluffed up his feathers even though the weather was fairly warm. I am uncertain if this was done to retain heat inside the cooling shade of the cedar or if it was an attempt to look as impressive as possible. 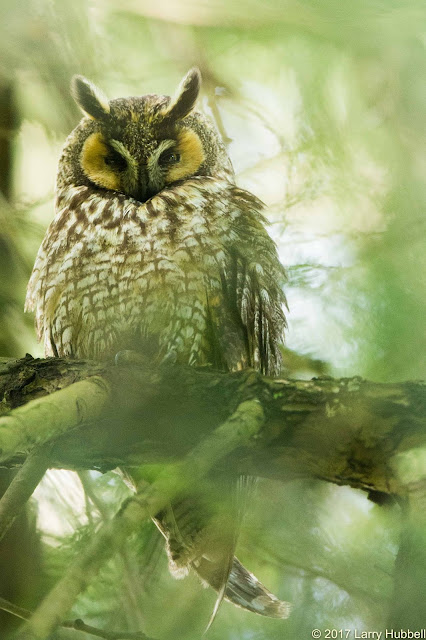 The relative length of Leo's wings was a surprise to me. Did you notice the wingtips crossing below his (or her) tail.

Dennis Paulson has mentioned that birds with relatively longer wings tend to migrate further than birds with shorter wings. The measurements in Sibley indicate that barred owls, which are not migratory, have wings twice as long as their overall body length. In turns out that great horned owls, which are also not migratory, have wings whose length also equals twice the measurement of their bodies. 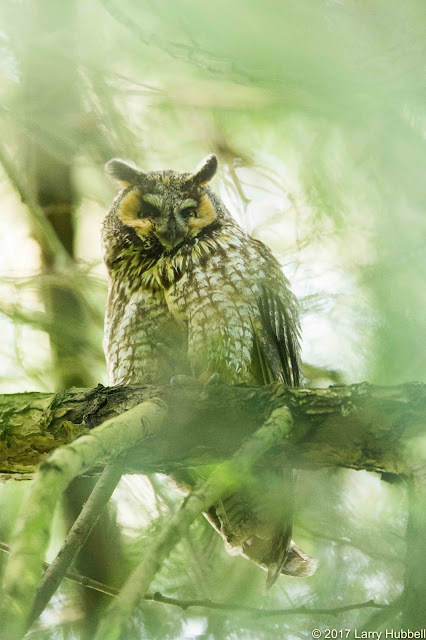 Long-eared owls, on the other hand, have wings which calculate out at 2.4 times their body length. Not surprisingly, the range maps for long-eared owls show that each year some of them breed north of the Canadian border and some winter as far south as Mexico.

Even Birds of North America mentions that their migration is poorly understood. It also indicates that beyond being migratory long-eared owls are also nomadic, e.g. they go or stay depending on the food they find. It seems to me that if we want to co-exist with wild creatures we must, at a minimum, understand where they live and why. (Budding scientists, please take note!)

While reviewing long-eared owl information I learned that they are sexually dimorphic. This means that there are visible differences in the exterior of the male and female birds. This effort inspired me to take another look at this close up.

This week my friend, Dan Reiff, pointed out that I may have misunderstood the gender-specific, long-eared owl illustration in my guide book. I primarily use 'The Sibley Field Guide to Birds of Western North America' by David Allen Sibley. The fact that Mr. Sibley states, 'dark vertical stripe through eye' under the 'Adult Female' symbol and the fact that his male owl illustration locates the stripe slightly differently is apparently just a coincidence.

After researching a half a dozen different sources I can find only one other reference to gender-based differences in long-eared owls. In Peter Pyle's, 'Identification Guide to North American Birds' he states, '...females may average darker overall, with richer buff and more heavily streaked plumage than males, but differences are difficult to access without comparison.... Reliable sexing should be attempted only with experience and, even then, intermediates (up to 50%) are not reliably sexed...'

The bottom line is sexual dimorphism in long-eared owls is difficult at best and it is certainly not as simple as it appeared to me when originally studying my Sibley's guide. I suspect we will never know for sure whether our long-eared visitor was best named Leo or Leona. If you have a Sibley guide you might take a look and see what you think. My apologies for the confusion.

A special Thank You to Dan for his expertise and attention to detail. 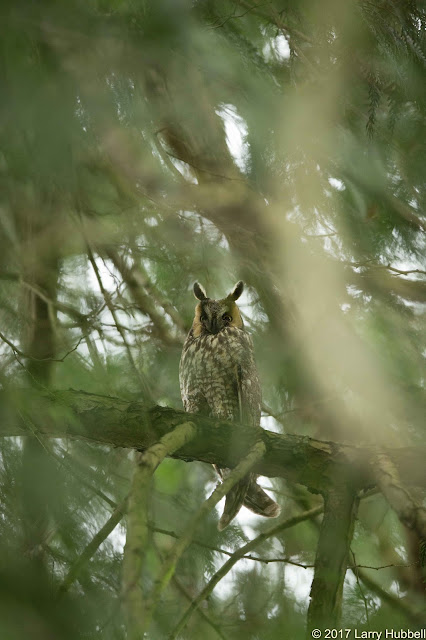 The fact that Leona spent a complete day sitting in a cedar tree in the Arboretum does not indicate that she is lazy. Owls are nocturnal. They generally sleep during the day and hunt at night.

Sending the day sitting in the cedar does seem to indicate that Leona is not currently nesting and most likely not feeding or protecting young. I have not seen any sign of Leona in the days since her visit. I suspect she was just passing through. I am hoping that Leona enjoys good health and a long life as she continues her journey, migratory or nomadic.

By the way, the name Leo came from the first letter of each word in the term 'long-eared owl'. It also turns out that the name Leona means Lioness, hence the title of this week's post.

Have a great day of Union Bay...where lions migrates through the city! 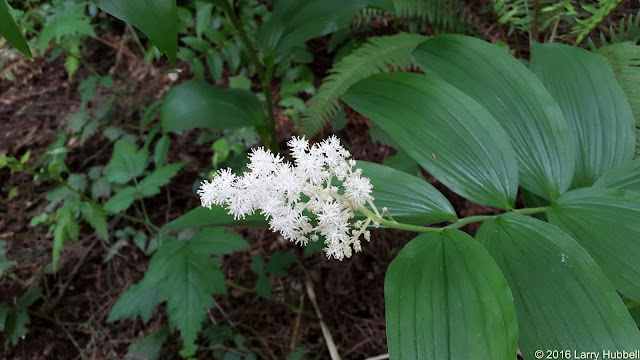 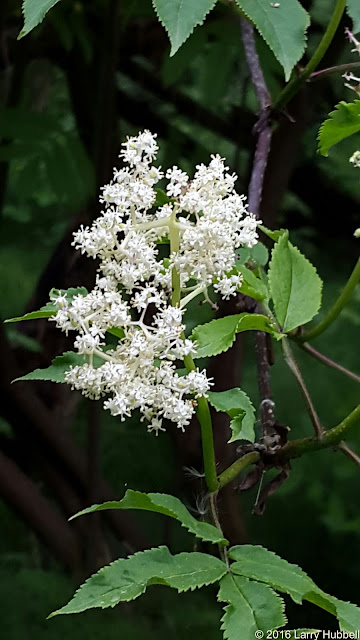 A) False Solomon's-Seal
B) Elderberry

Both of these plants are native to Union Bay and the PNW. Both plants are currently blooming in the Arboretum, although the elderberry is just about done.