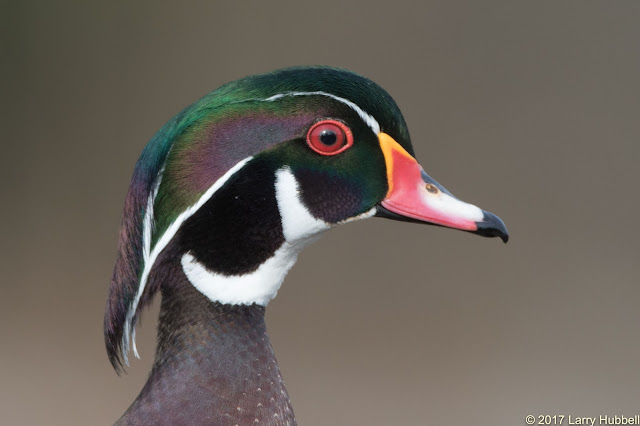 What is your first thought when you see a photo of a male wood duck? 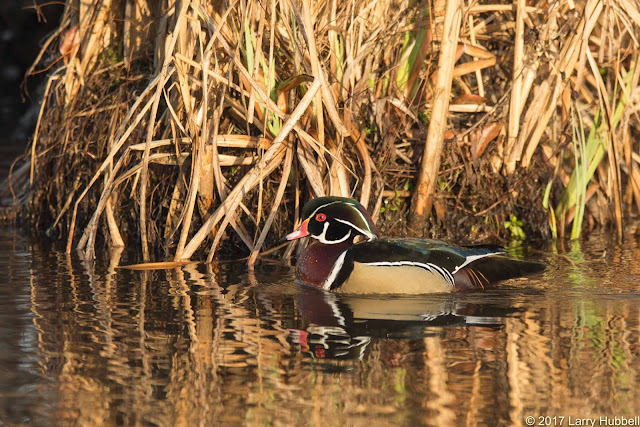 You might think 'Wow, what a colorful bird' or you might categorize it as a 'dabbling duck' as opposed to a 'diving duck.' Wood ducks are wetland birds who generally feed by tipping over and searching below the surface for flora. 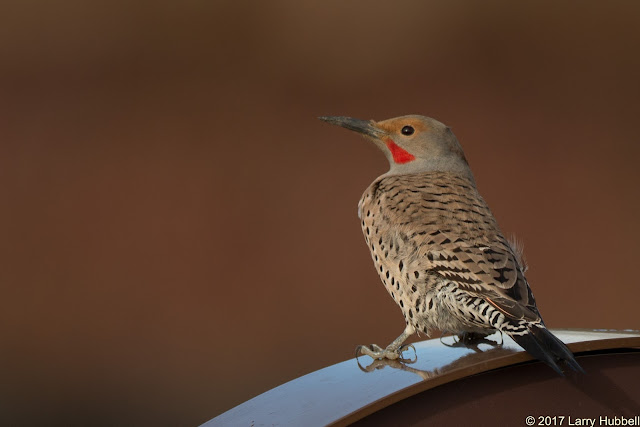 I would be a bit surprised if you immediately thought of a northern flicker or... 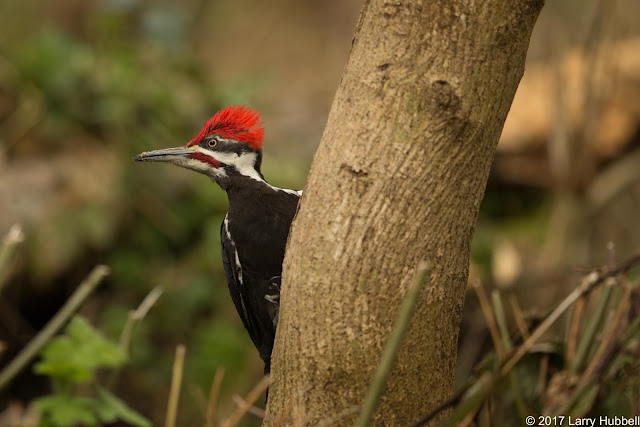 ...a pileated woodpecker. It may seem odd that in the natural world woodpeckers play a critical role in wood duck procreation. Unlike mallards and other dabbling ducks which build their nests near water and close to ground level, wood ducks need safe prebuilt elevated cavities usually created in trees, preferably near water. Around Union Bay, woodpeckers may be the only native creatures who make holes in trees large enough for wood duck nests.

In fact, among our local wood ducks I suspect the lack of tree cavities is most likely the primary limiting factor in their reproduction. Their need to reproduce is so strong that female wood ducks will often leave eggs in neighboring wood duck nests. Males will often inseminate females other than their mates. Basically, wood ducks strive to pass on their genetic material by any means possible. 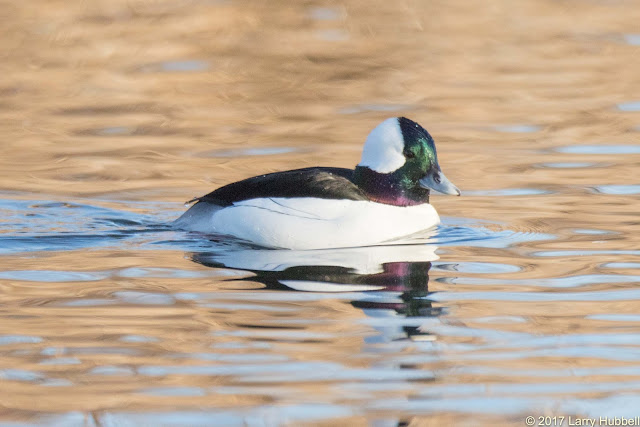 Around Union Bay we also have diving ducks in a similar situation. The competition for pre-fabricated nest holes includes buffleheads... 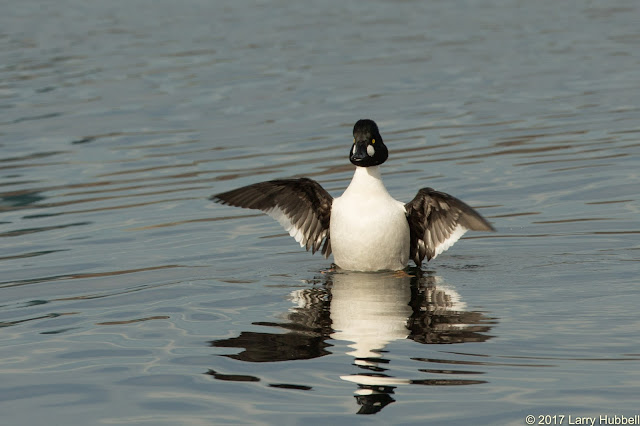 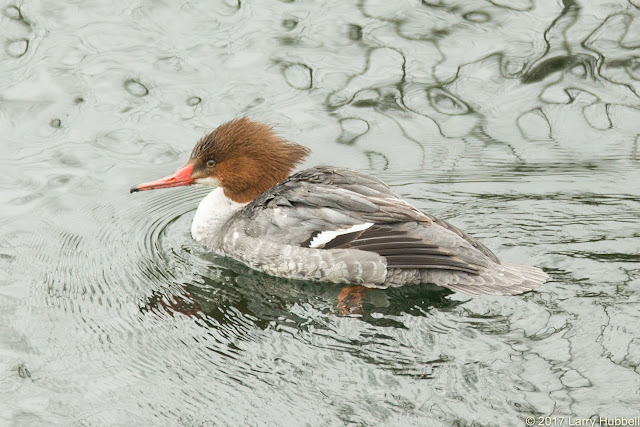 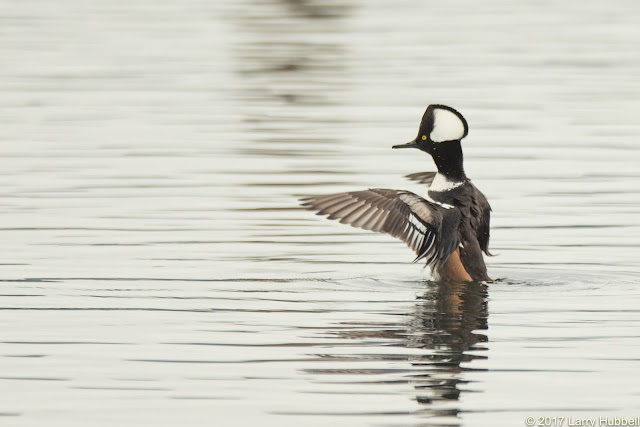 ...hooded mergansers. None of these birds are capable of creating their own nest sites. 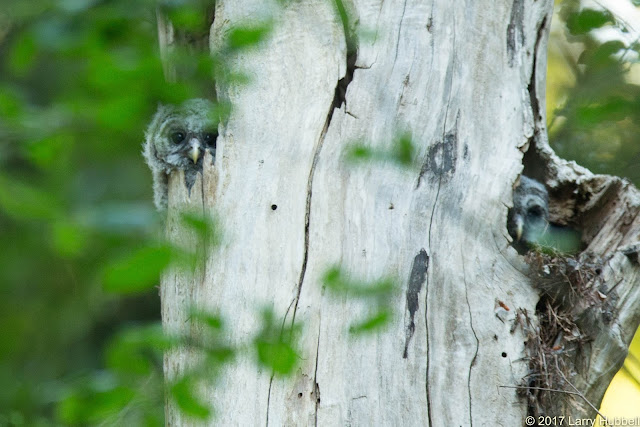 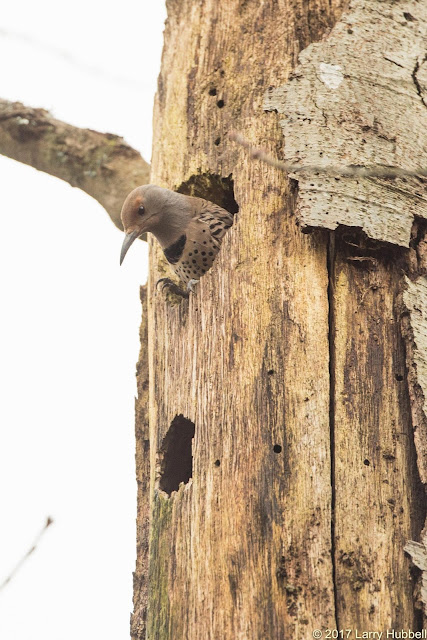 Even though flickers can create new nest holes, occasionally even they consider the secondary housing market. In February I found this female checking out the view from the upstairs balcony of this obviously pre-owned site. 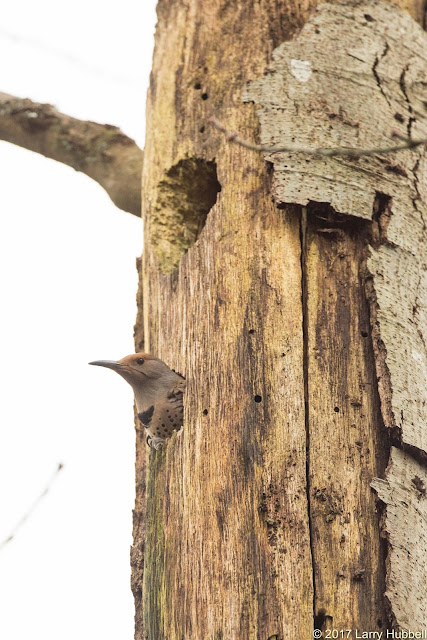 While I watched, she moved downstairs and inspected the main floor entry. 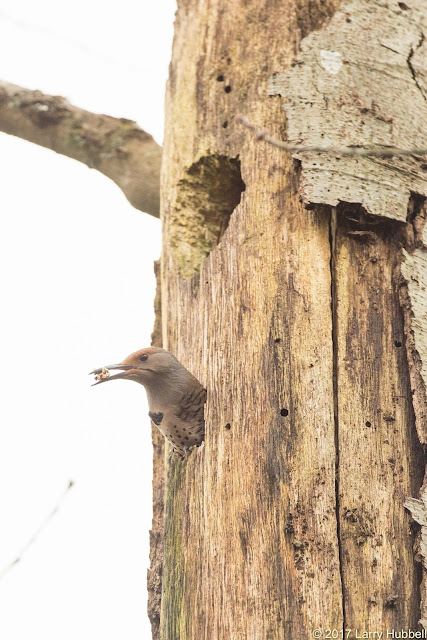 I concluded that she liked the site when she began taking out the trash. 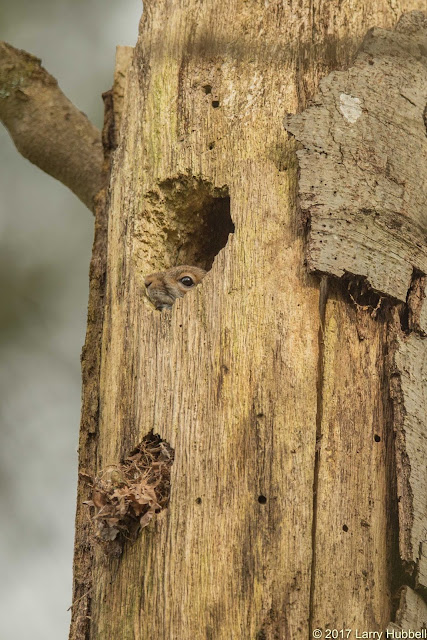 Imagine my surprise a few weeks later when I found the main entry filled with leaves and a new tenant watching the world from the upstair balcony. It turns out eastern gray squirrels are another creature participating in our Union Bay housing crisis. 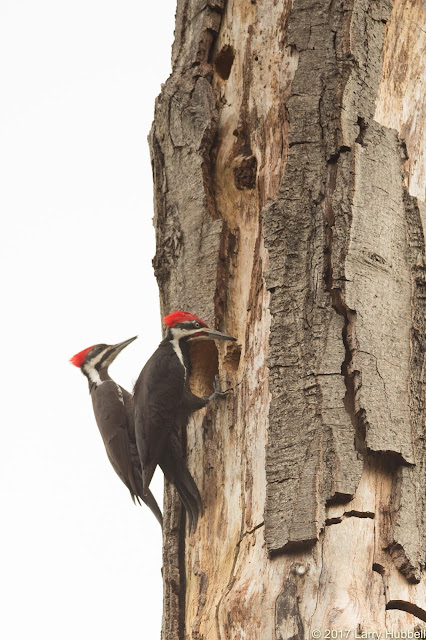 Toward the end of March, Chip finished his second nest site of the year. His first was in a dead cottonwood tree which was apparently too close to the Foster Island trail. His second effort is in a quieter neighborhood with a better view, which includes looking down on the squirrel's nest. 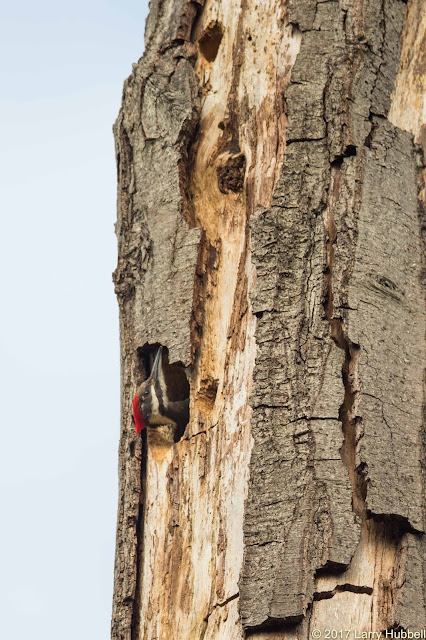 Goldie has taken up residence, but she does find the neighbors worrisome. 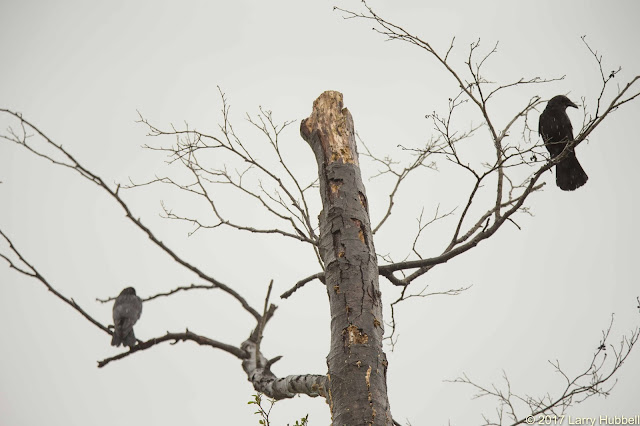 Crows are nesting nearby and they often stop to rest in the top of Goldie's new tree. 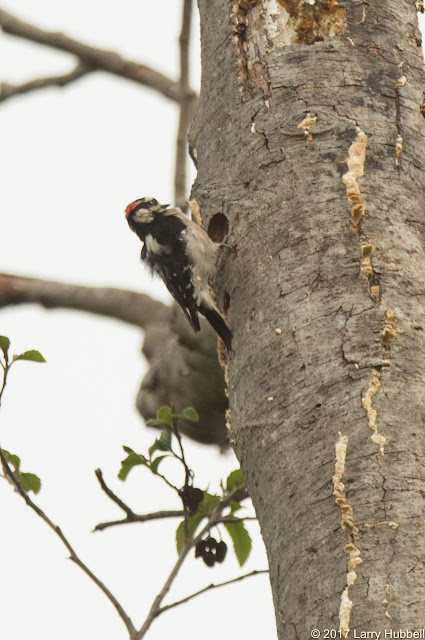 Dead trees in the city are in limited supply. Whenever the crows leave the area, this little downy woodpecker returns and continues building its nest about fifteen feet above Goldie's head. In this case both species of woodpeckers are building in the soft, dead parts of an alder tree that is still clinging to life. You can see a few fresh green leaves just below the downy woodpecker. 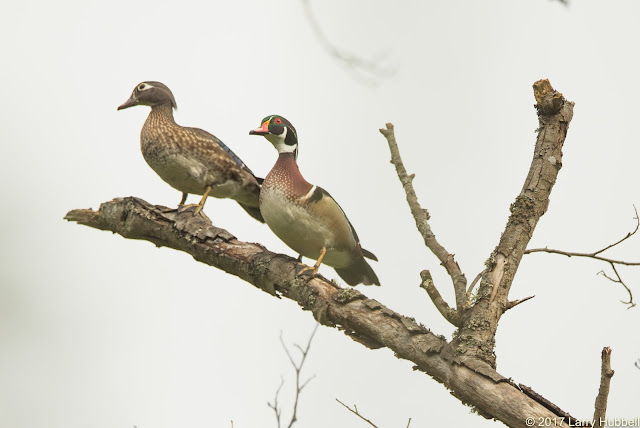 In addition to all the other competitors, we still have the wood ducks. 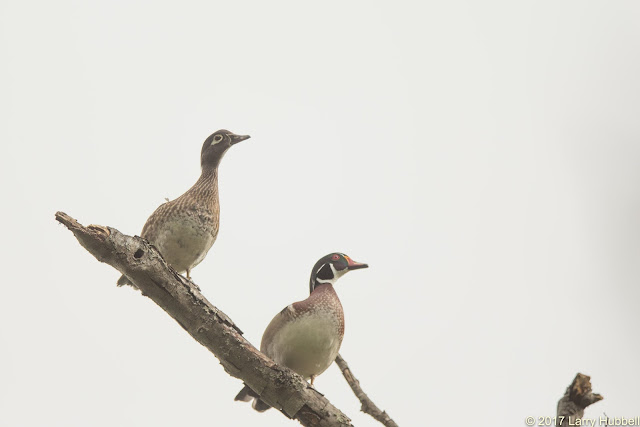 They come and sit right below Goldie's front door and peer up longingly at her spacious new home. 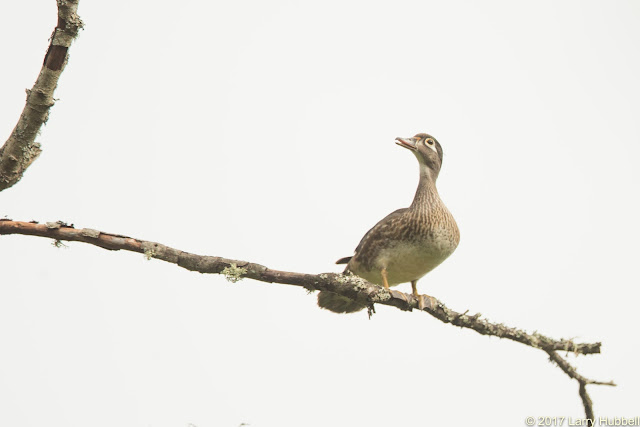 The female wood duck appears to feel the pressing need to lay eggs a bit more acutely than the male. Here she is looking for back door access. 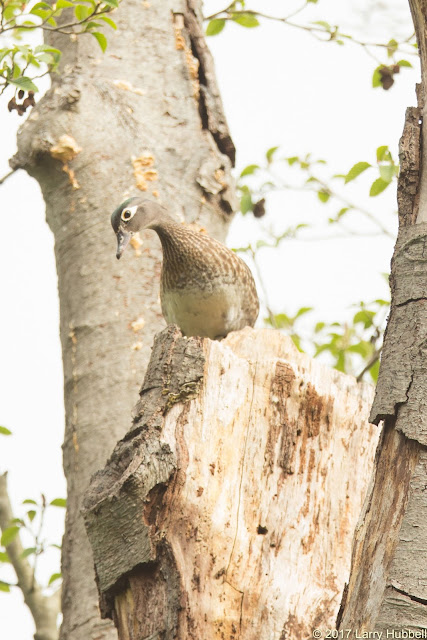 Next she searched for any overhead opportunities. 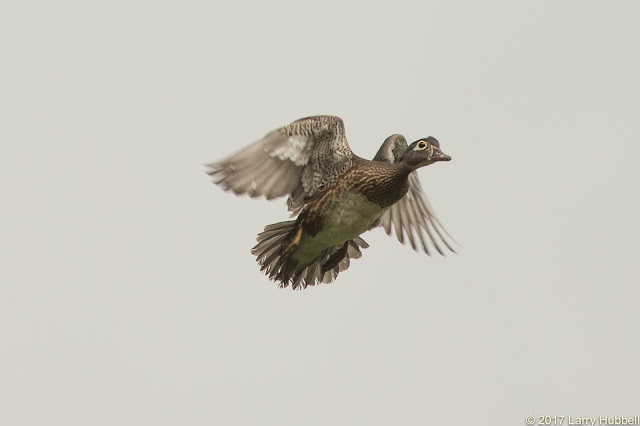 In a futile effort she even flew up and tried to hover outside the entry to the pileated nest. I could not see Goldie's reaction, but the female wood duck seemed rather intimidated as she flew quickly away. 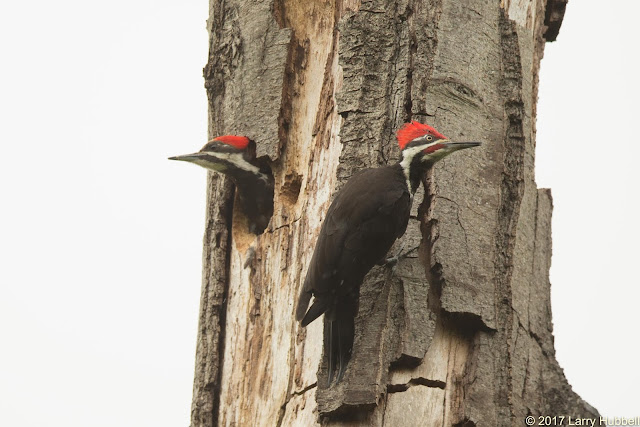 A few days ago, when Goldie apparently felt the wood ducks were getting too close, she called for reinforcement. In short order Chip appeared and the two of them spent a couple of minutes evaluating the situation. In this case the female wood duck had already left the tree but the male wood duck was still hanging around on the branch behind the nest. 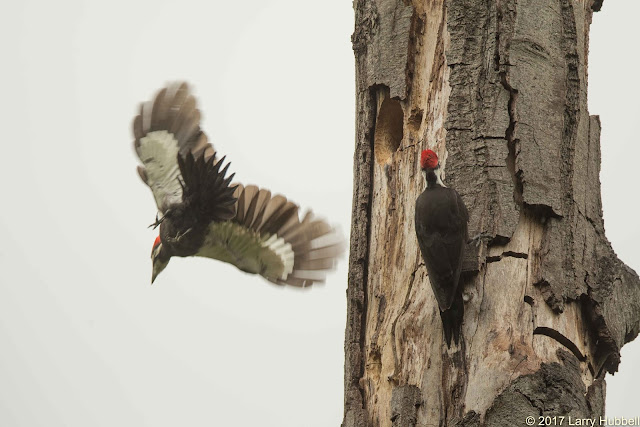 Suddenly, Goldie leaped out of the nest, circled the tree and chased the male wood duck away. Chip entered the nest as soon as Goldie left. I stood dumbfounded, with my camera in hand, as the action unfolded faster than I could point and click. Clearly, protecting their eggs is the top priority of the pileated woodpeckers.

I am happy that Chip and Goldie appear to be well on their way to reproductive success. Hopefully, we will get to see young in the nest before too long. On the other hand, I am concerned about how we can insure future generations of woodpeckers, wood ducks and other cavity nesting birds around Union Bay.

I think the solution requires a two pronged approach.

First we need to make sure that we leave places in our parks where cottonwoods and alders can grow. This is the sixth year in a row where the primary nesting tree of our local pileated woodpeckers has been in a decaying alder. It is also important to mention that all five of the previous nest sites are no longer functional because the dead trees have fallen due to the natural process of decay.

In addition to pileated woodpeckers, downy woodpeckers, chickadees, nuthatches and other birds excavate similar nest sites in trees. In my experience trees stay 'ripe' for nesting for only a short time. I would estimate that almost half of the nest sites that these creatures build no longer exist one year later because the host trees decompose and fall.

Secondly, on an annual basis we should refresh, replace and augment the number of wood duck boxes around Union Bay. The new boxes would not be just for wood ducks. They may be used by any of the cavity nesting birds which we reviewed earlier. There are still a few old boxes hanging around on the south side of Union Bay, however many have fallen down and need to be replaced. Of the remaining boxes I suspect all need to be cleaned and repaired. 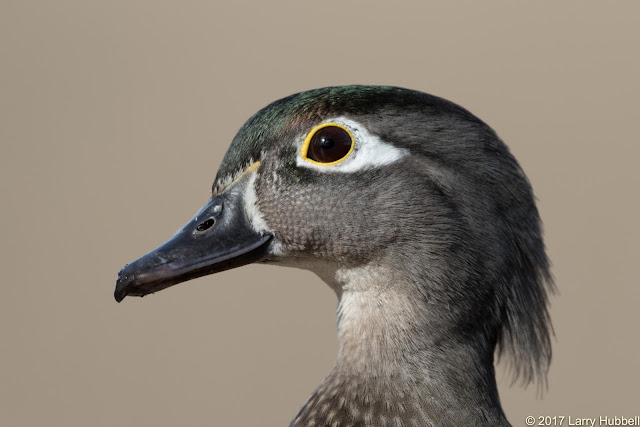 We are lucky to live in a city where wild creatures reproduce. To maintain the local cavity-nesters and avert future housing crises, we will need to actively assist the natural processes around Union Bay.

Have a great day on Union Bay...where nature strives to reproduce in the city! 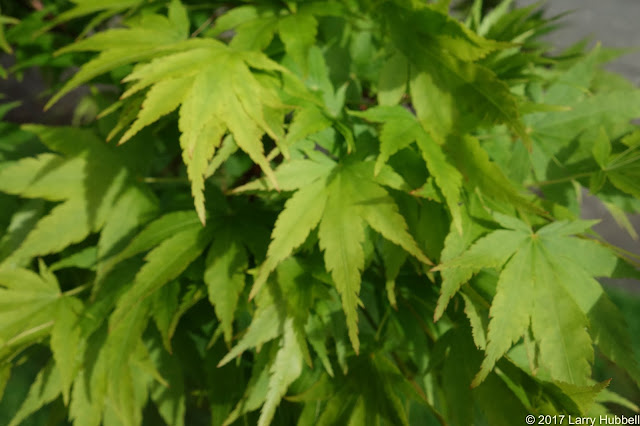 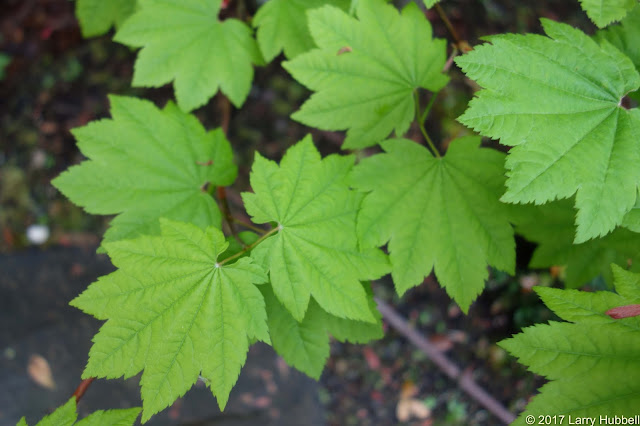 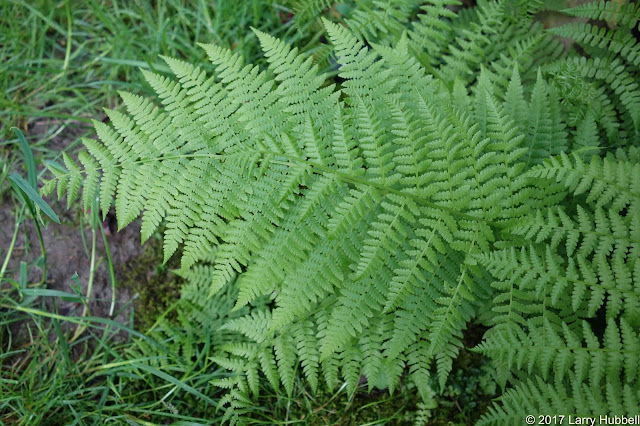 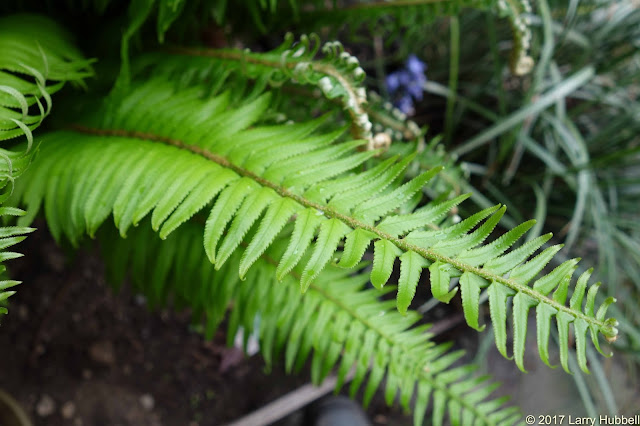 A) Japanese Maple
B) Vine Maple
C) Lady Fern
D) Sword Fern
As the name implies only the Japanese Maple is a non-native plant. You can learn more about the appropriate placement of the native plants by clicking on the name and reading the information provided by King County.

Posted by Larry Hubbell at 1:04 PM