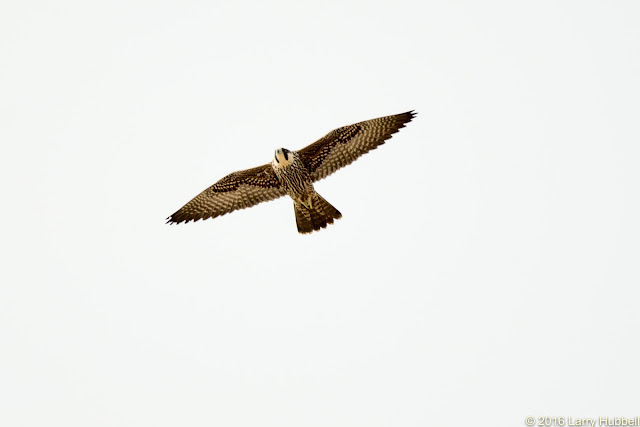 Peregrine falcons are the fastest creatures on earth. If pigeon's could talk, I am sure they would tell us that speed kills. In spite of their speed and intelligence, young peregrine falcons face a lot of challenges. 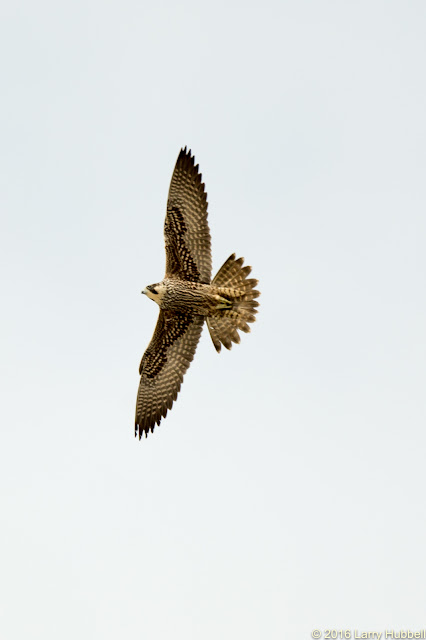 A few weeks ago, I was lucky enough to ride with Martin Muller while he was checking out potential peregrine nesting sites around Seattle. Each year Martin and his friend Ed Deal attempt to band all of the peregrine nestlings in the Seattle area.

Martin pointed out that the bird in the photo above is a juvenile who is nearing its first birthday (or maybe I should say, hatch-day.)  Can you see a major difference between the young bird and the one in the next photo? 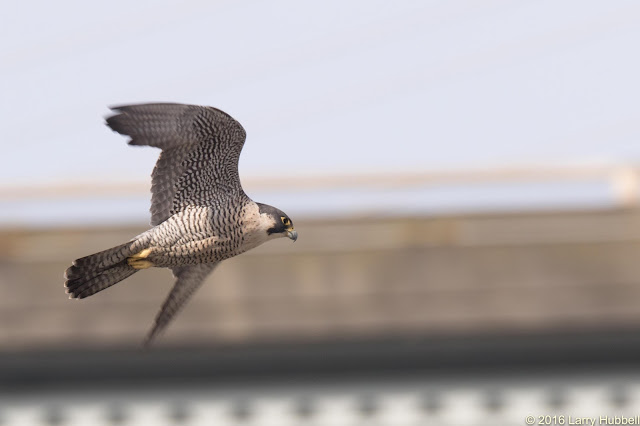 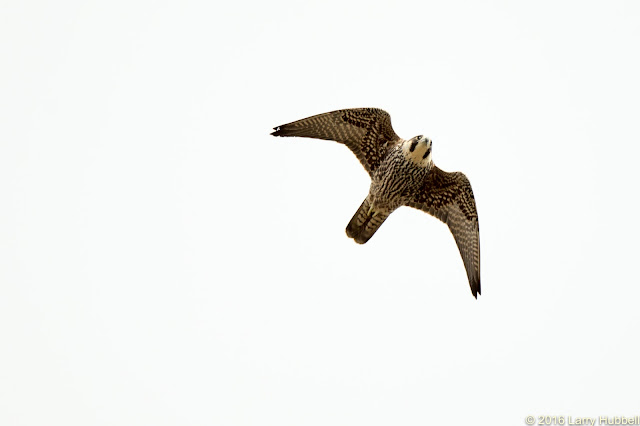 Here, our young peregrine is pulling its wings in and preparing to dive or stoop. The faster the peregrine needs to go, the closer the wings will get to its side. When a flock of pigeons see a falcon stooping them, they immediately take to the air and hope the falcon will lose them in the crowd.

In Bud Anderson's raptor class he tells his students, "Never take your eye off a flying falcon". This would seem like good advice for the pigeons too.

Bald eagles are not as fast as peregrines, but they are bigger and given the chance, they will eat the lunch of smaller birds. This type of regularly occurring theft is called, kleptoparasitism. In addition, eagles have no qualms about removing and consuming other bird's nestlings. Peregrines recognize bald eagles as a threat. A peregrine will usually attack any eagle that ventures too close, especially during nesting season. 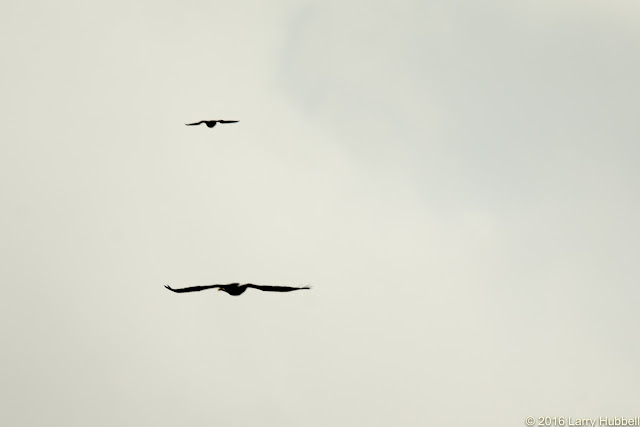 In this photo, our young peregrine is attempting to drive a hungry eagle away from its selected flock of pigeons. 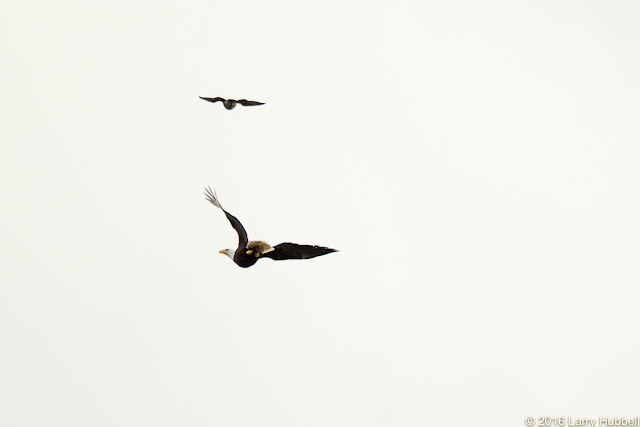 The eagle twists its head to keep an eye on the speeding peregrine. 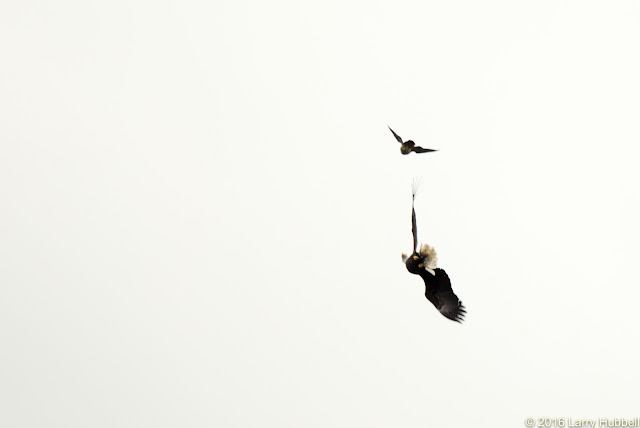 The peregrine pulls its wings in tighter - diving ever faster. The eagle's response looks a bit slow and somewhat clumsy. 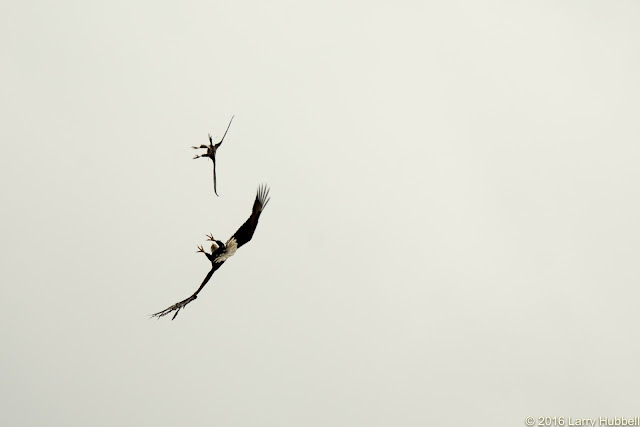 Both birds attempt to put their best foot forward or at least their sharpest talons. 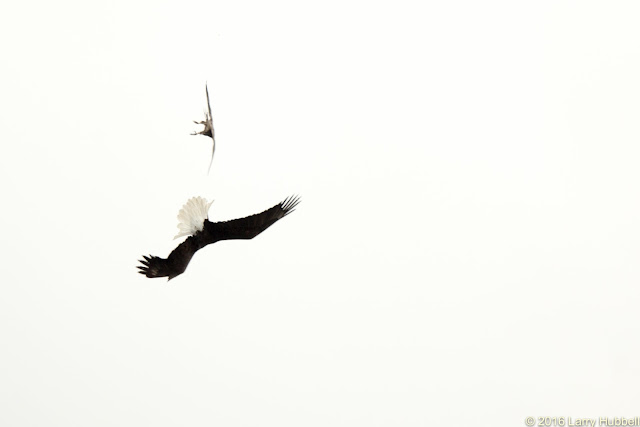 It was a bit like watching a deadly dance in the sky. 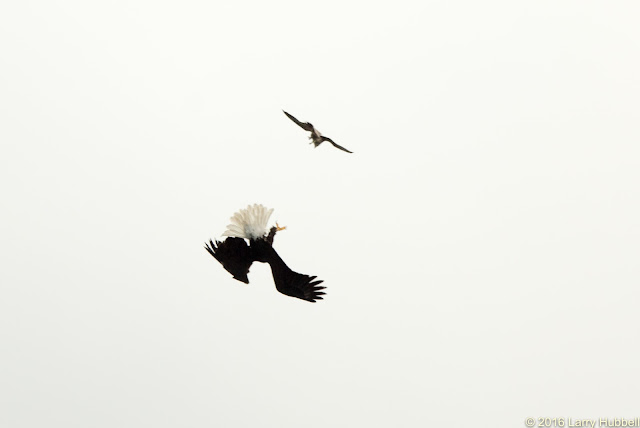 For all the eagle's acrobatics, it is clear that the falcon is far more agile. 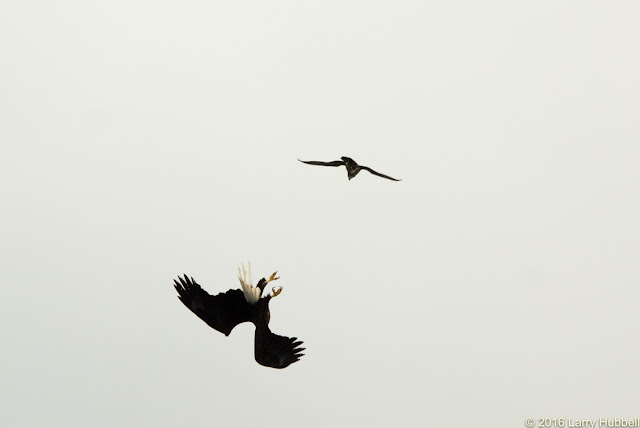 It is almost like the peregrine is laughing as the eagle grasps at thin air. 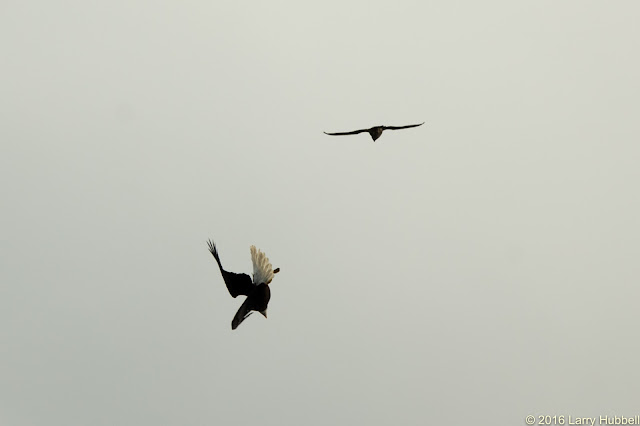 The eagle recognizes the falcon's superior skill in air-to-air combat. 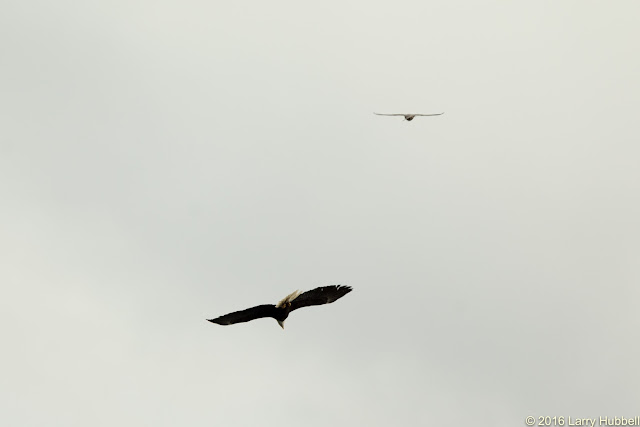 The eagle retreats. The peregrine wins the initial skirmish. 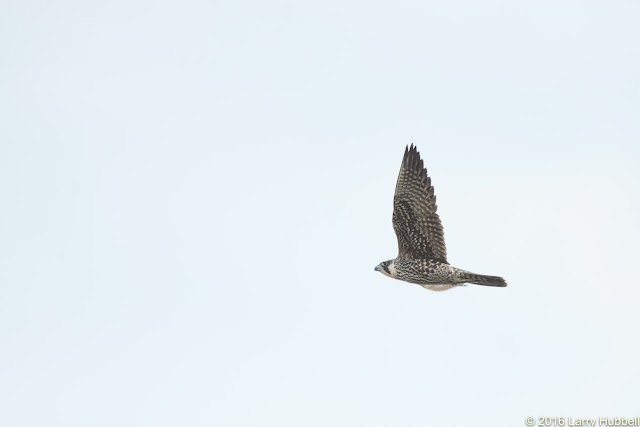 The young falcon returned and continued to chase pigeons.

Eventually it caught one. The young falcon was apparently attempting to return to high ground before eating its lunch. Sadly, with its excellent eyesight, the eagle had observed the falcon's hunting and was gaining ground on the peregrine. With the added weight of the pigeon, the falcon could not make full use of its superior speed. Ultimately, it had to choose between giving up its meal or becoming the second course on the eagle's menu. Ultimately, the falcon decided to drop the pigeon.

Not only must young falcons learn to hunt, but they must also learn how far an eagle can see and when to hide their catch. Speed helps, but knowledge and experience are the ultimate keys to survival.

Martin Muller (and Ed Deal) spent many years working with renown raptor-guru Bud Anderson and his Falcon Research Group. During this time they banded a wide variety of Washington state raptors. The raptors Martin has banded range from kestrels to golden eagles. Golden eagles are even bigger than bald eagles. In Washington state, Martin has banded raptors on seaside cliffs in the San Juan Islands, on mountain ridges in the east Cascades and on top of skyscrapers in downtown Seattle.

Currently, Martin and Ed continue to band peregrine falcons while also banding Cooper's hawks in the Seattle area. Their Cooper's hawk project continues to build on the original pioneering work of Jack Bettesworth.

Curiosity has driven me to ask Martin (and Ed) many different birding questions. Both gentlemen have graciously answered my questions and guided my learning. Last week, I asked Martin about a couple of his personal experiences.

What was your first birding experience?

Initially, when I was about 11 years old I enjoyed taking my bike and riding out to explore natural areas around my home in Amsterdam. However, the moment when I became truly hooked on birding was when I was 18. A group of friends took me to visit a blind at Oostvaardersplassen - which translates as "East Sailors Ponds" - east of Amsterdam. The area was developed by diking a portion of water, partially dewatering it, and dumping seeds into the shallow water. In time, plants grew up and attracted a variety of birds. At Oostvaardersplassen I watched shorebirds, great crested grebes, herons, rails, white spoonbills and many others. Today, the birds can be easily viewed from boardwalks, when I first visited the area we had to wade through the mud to watch the birds.

What is the largest raptor you have banded?

A few years ago Bud inspired a group of us to trap raptors along Entiat Ridge, northeast of Leavenworth. In the fall, the raptors follow ridge lines as they migrate south. The location where we were working was immediately above a 2200' escarpment. The wind was fierce. (The air flowing up and over the ridges provides lift which minimizes the raptor's effort to fly and assists in migration.) During the weekends there were a number of people present to help with the banding. However on Sunday afternoons, most everyone had to return home to prepare for the work week. On this particular Sunday, I took an extra day off so I could stay and continue banding. Not long after everyone left I noticed a golden eagle approaching from about 7 miles out. The golden eagles are notoriously wary. Once I noticed the eagle had fixated on the trap, I did nothing further. I simply waited and watched. The eagle hit the trap with great speed, and though unharmed, became thoroughly entangled.

Suddenly, I realized I had trapped a very angry golden eagle. Getting close to the eight sharp talons and a very sharp beak was sobering. I had heard that bald eagles will attempt to remove the eyes of people who trap them. I wasn't sure if the larger golden eagle had the same idea but I did attempt to keep my head away from the beak. With great care and a firm grip I untangled the eagle, applied the band and finally let it go. That was my first encounter with a golden eagle and the largest raptor I have banded. 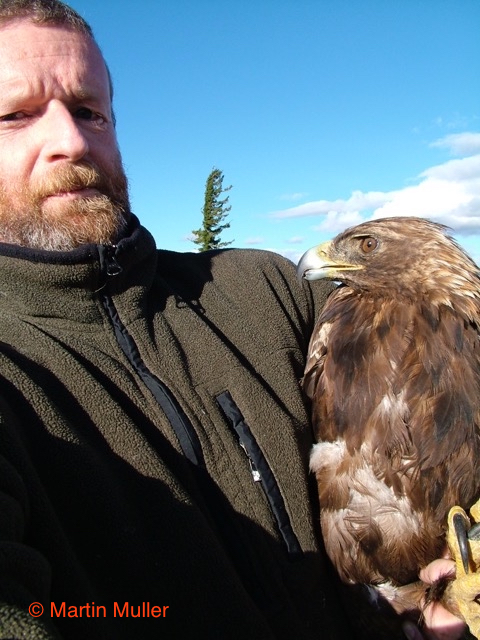 Martin and the golden eagle in a selfie, before the day of selfie-sticks.

Be sure to compare the size of Martin's finger to the size of the single talon visible in the lower right portion of the photo. Banding is a passion for Martin. There is no monetary reward, but the time spent in close proximity raptors is a very special kind of compensation.

Have a great day on Union Bay...were nature lives in the city!