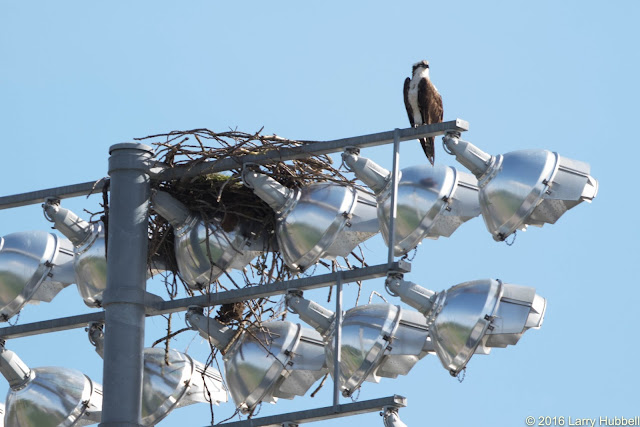 By last Tuesday our Union Bay osprey made significant progress on their potential nest for 2016. Viewing their work from a distance, it is easy to imagine how wonderful it would be to watch young birds being fed, learning to fly and ultimately learning to hunt for themselves. In fact, every casual passerby who stopped to watch me photograph the birds reacted positively to their presence. Watching the osprey's nesting efforts succeed has nearly universal appeal. 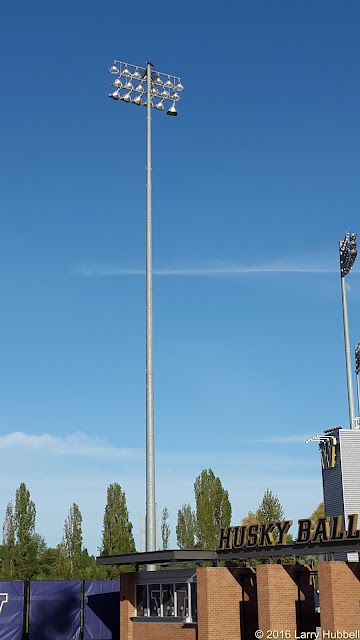 It is harder to imagine the pressure and the challenges being faced by the folks at the University of Washington. The light pole the osprey have chosen sits almost directly above the entrance to the beautiful new baseball field. Falling sticks are an obvious danger to students and fans. A stick falling from over a hundred feet could easily injure a fan standing in the midst of a game day crowd.

From a distance, it is easy to overlook the large scattering of excrement which is thickly sprinkled around the pole. The white "frosting" does not fall neatly just at the base of the pole, rather it drifts out in all directions. It falls into the soccer field, around the ticket booth and into the beautiful new courtyard - which is the entrance to the baseball stadium. The excrement is certainly not pleasant to smell, potentially a bio-hazard and not what any of us would want covering our own front porch.

With the baseball season in full swing, the danger from the nesting fallout is simply not acceptable. Yet, if eggs are laid the situation becomes permanent, until the osprey leave in the fall. The facilities team for the Athletic Department must be feeling immense pressure to resolve the situation.

We should also remember that last summer the Athletic Department thoughtfully paid for the alternative pole and nesting platform  which were installed in the Union Bay Natural Area. Unfortunately, this pair of osprey have strong site fidelity, they appear to have no desire to move.

On Wednesday, with official permission, the team at the University of Washington removed the incomplete nest before eggs could be laid. 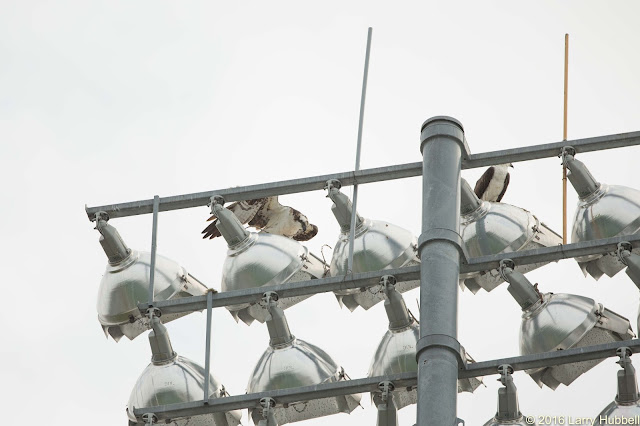 Two small vertical poles were also installed on top of the light structure. The little poles are not one of the formal deterrents suggested by Jim Kaiser from Osprey Solutions. I suspect that given the timing and pressure, the poles were quickly selected from materials at hand and installed with the optimistic hope of inspiring the osprey to nest elsewhere. 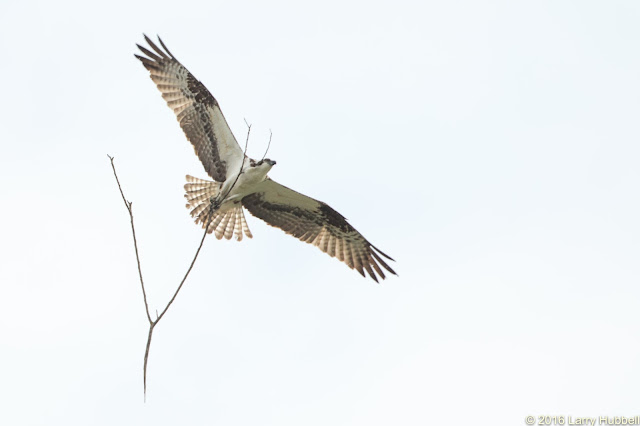 On Thursday morning there was a lot of calling back forth between the osprey, while they attempted to rebuild. Occasionally, the birds were able to get smaller branches to stay on the lights. When they approached with larger branches they were unable to navigate around the two new poles. The osprey were not immediately successful at rebuilding, but neither did they relocate.

Fred Hoyt, Associate Director from the University of Washington Botanic Gardens, graciously offered to help find a more promising alternative site for a nesting platform. Fred, Jim and I reconsidered virtually every potential location in the surrounding area. The variety of constraints were surprisingly complex.

Fred pointed out that many of the small natural areas around the stadium are actually environmental mitigations from previous improvements. Jim said it might be possible to get special permission to site a nesting pole in one of those areas. However, he went on to mention that where ever tall trees have grown up, a nesting platform is unlikely to succeed. The osprey are likely to reject those sites due to fear of predators - like raccoons.

To the east, much of the nearby Union Bay Natural Area will not work because the 520 mitigation which is scheduled to start with heavy equipment and distracting noise, etc. Plus, areas east of the 520 mitigation get closer to a local bald eagle nest, which could encourage increased harassment from the eagles. In addition, the UBNA is on fill which may not support the truck required to carry and install a nesting pole. This is one of the reasons the nesting platform installed last year was sited close to the walking trail.

Potential sites north of the athletic fields could be impacted by noise from the helipad which is used for medial emergencies. Last week Tyler Clay, UW Facilities Manager, pointed out that the use of the helipad increases during Spring and Summer. This conflict will increase at exactly the time when the osprey would be laying eggs and raising young.

The areas to the west of the athletic fields are already developed. Siting a nesting platform there would not significantly reduce the conflict with human use. Plus, it would be further from the water where the osprey like to hunt for fish. 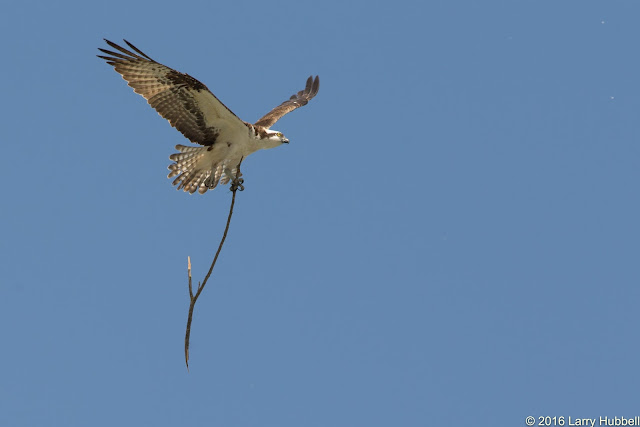 By Friday afternoon the osprey had become more focused and active. 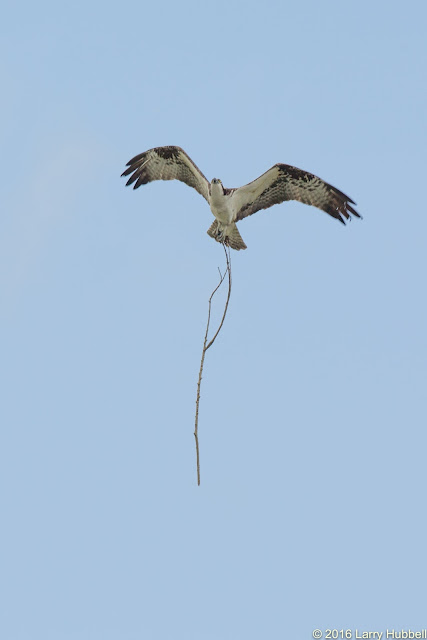 They were silently delivering sticks to the light pole and nest building like professionals. 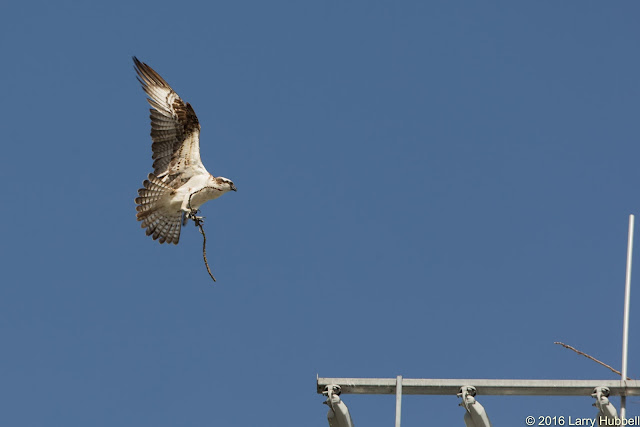 While I watched, they were arriving with new sticks at a rate of 26 per hour. 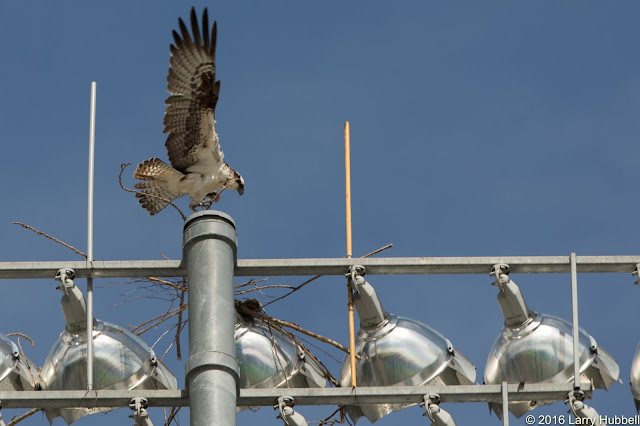 Often a number of sticks would accumulate before a large clump would fall. It is clear the birds are no longer intimidated by the two small vertical poles. It will only be a matter of time before they are once again successful at getting sticks to stay on the light pole.

There seemed to be more sticks falling on Friday, than on the days prior to the nest being dismantled. Clearly, the osprey will not be allowed to actually complete a nest at this site. If the osprey are not able to lay eggs in the next couple of weeks, they are unlikely to be successful this year. Sadly, if nesting is unsuccessful the osprey are likely to build "frustration nests" through out the summer. The net result will be an unsatisfactory situation for both the osprey and the UW Athletic Department.

In retrospect, my post last week which described the situation as Dancing With Osprey, may have understated the complexity, pressure and challenges involved in this situation. The solution with the best potential for all around success appears to be to:

A) Quickly, erect an alternative nesting platform south of the UW Baseball Field and
B) Invest in professional deterrents to induce the osprey to move.

Even though there is no guarantee the osprey will accept this alternative, it seems to be the best response to a dynamic and difficult situation,

Someday, I can imagine one of our grand-children watching a UW athlete hit a home run. The ball drops over the fence and lands below an osprey nest. At the same time, an osprey delivers a fish to a young bird calling for food. The child notices and points excitedly. The child might be distracted from the the baseball game for a moment. However, this distraction might actually reinforce the values of UW Athletics. Team athletics focuses on teaching larger life lessons - like working together. Successfully siting an osprey nest near the field will demonstrate working together with nature. No doubt a harmonious vision of home runs, osprey and nature will last a lifetime.

Have a great day on Union Bay...where osprey yearn to nest in the city!