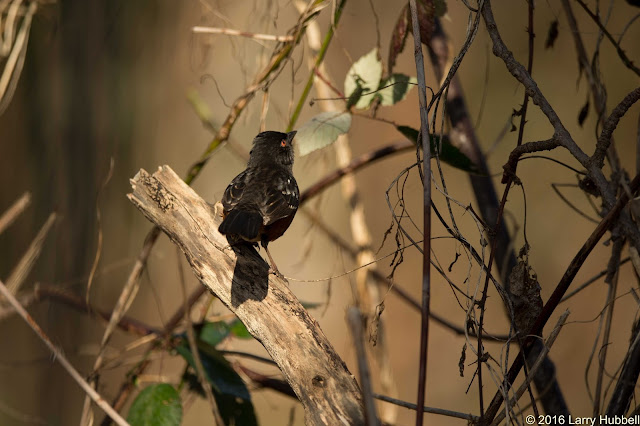 Spotted Towhees are odd little birds. For one thing, when they turn their backs they appear to be nearly solid black, even though they are not. I suspect that black may actually be one of the best colors for camouflage. It certainly seems to work well for crows and ravens. 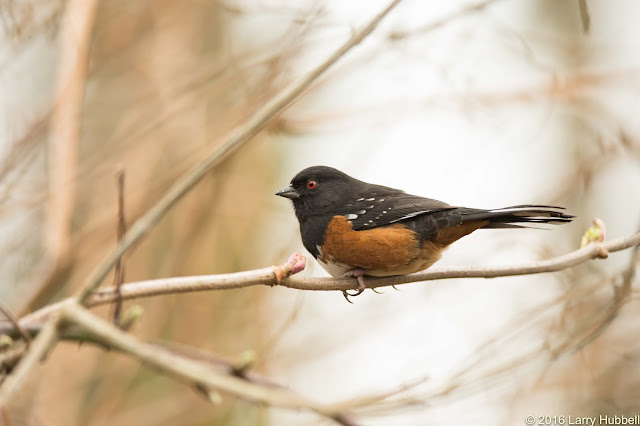 When we view a towhee from the side, it looks to me like a completely different bird. I can even understand how a novice birder might think it looks a bit like a robin. On average, an American Robin is only 20 percent longer than a Spotted Towhee, but it does weigh nearly twice as much. The size difference seems appropriate when we realize that a robin is part of the thrush family and the towhee belongs to the family of sparrows. 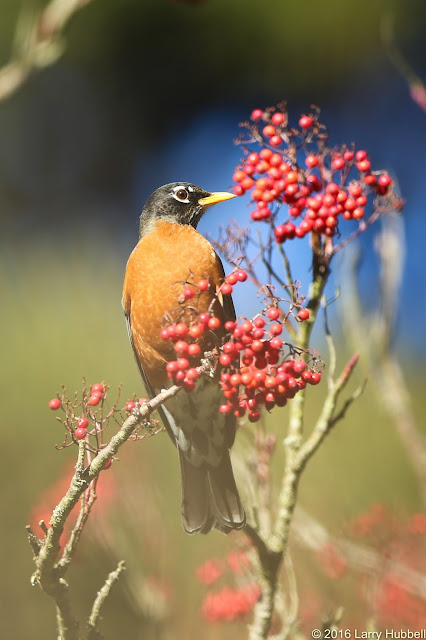 A closer inspection reveals the towhee's short dark beak and bright red eyes, which are not robin-like at all. In addition, a towhee's preferred habitat is not a muddy, wet lawn full of half-drowned worms.

Speaking of differences between birds, when I first learned the towhee's full name it was called a Rufous-sided Towhee. That name also included its cousin who is currently called an Eastern Towhee. The old name, for both birds, was more intuitive and obvious, even if less precise  It is curious how much effort we spend dividing and defining species. None-the-less, it is all about paying attention to the natural world which is critical if we are to learn to live in harmony with nature. 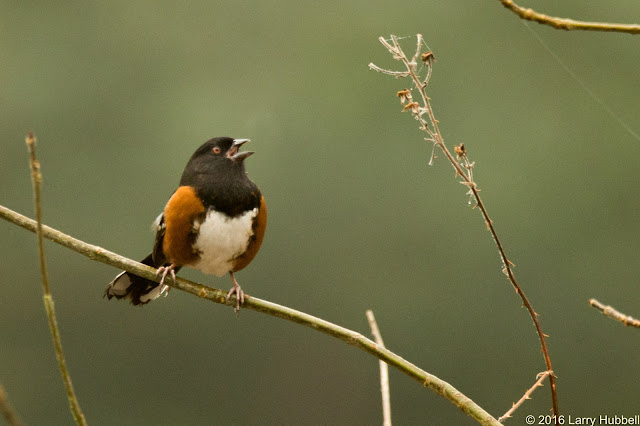 This Spring, if you are lucky enough to hear a male towhee proudly singing you will almost certainly notice its dark black head, bright white breast and maybe even the two white spots hidden under its tail. Much of the white coloring along with the mechanical whirring sound of its song is also very different from a robin. Listen to the second song on All About Birds (Click Here), if you would like to hear the song which is most similar to our local spotted towhees. 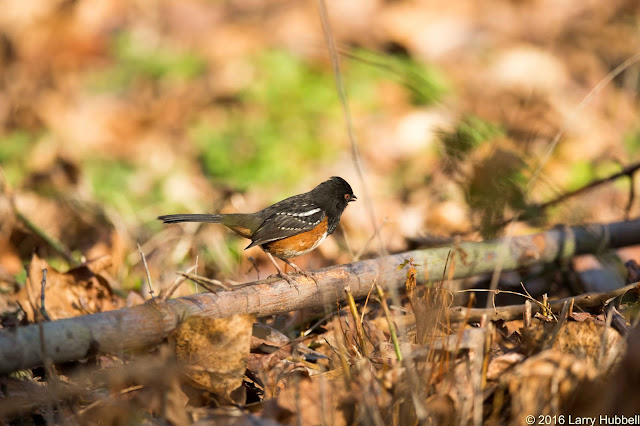 The previous photos, and even the song, may give you the wrong impression about our towhees. Their most common sound is their call. It is a rusty, cat-like "mew", which is similar to the calls on the last sound track on All About Birds. When you hear the voice of a towhee, most often this will be the sound you will hear and usually you will not see the bird at all. 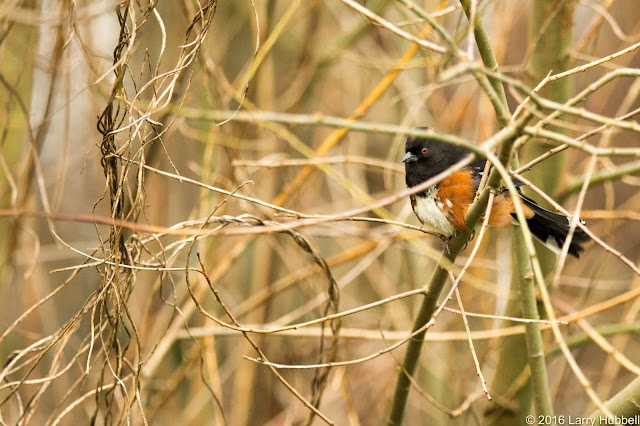 Towhees are often hidden in thick brush and... 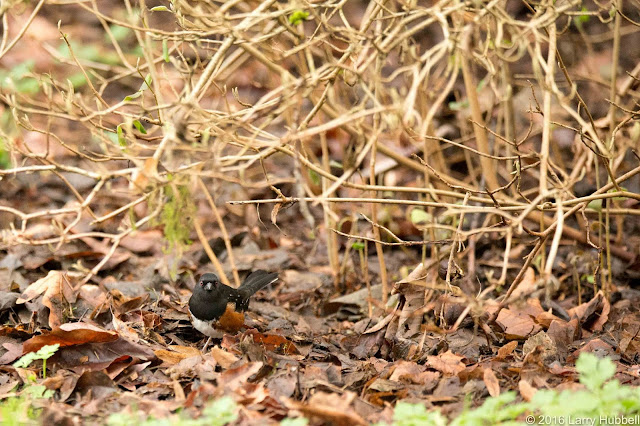 ...even out in the open they easily blend-in among dry leaves. They do make a third noise which you may hear when you are out for a walk. It is a loud scratching noise which sounds louder than their size implies. The sound makes me think of the scratching of a barnyard chicken. Dried leaves are nearly always involved. Towhees will scratch and search for any little creature they can find. Towhees seem fairly fearless about making such a racket, especially when they are hidden from view. 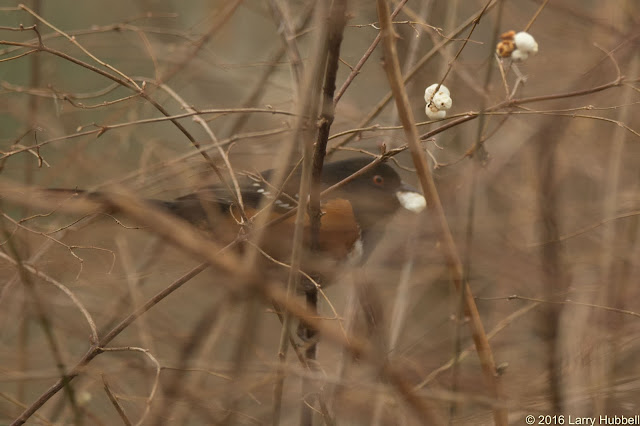 In the winter when insects are harder to find, towhees will eat vegetation. Last week on Foster Island, one was eating snowberries as if they were tiny little marshmallows. I have never seen any other creature eat the berries, and during the winter there are hundreds hanging - untouched - all over the Arboretum. I suspect they must not taste like marshmallows. 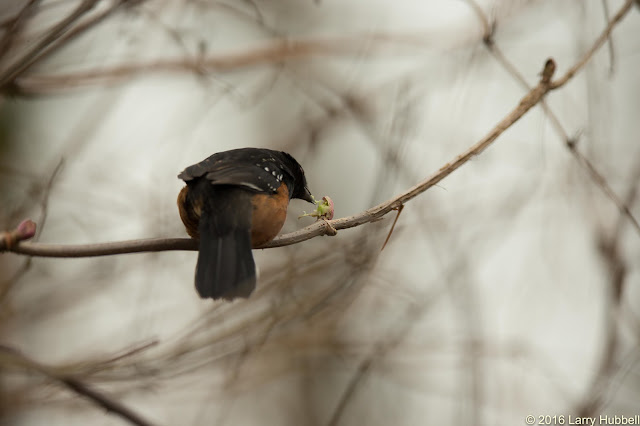 In another first for me, last week I watched a towhee consume the bud of a red elderberry. 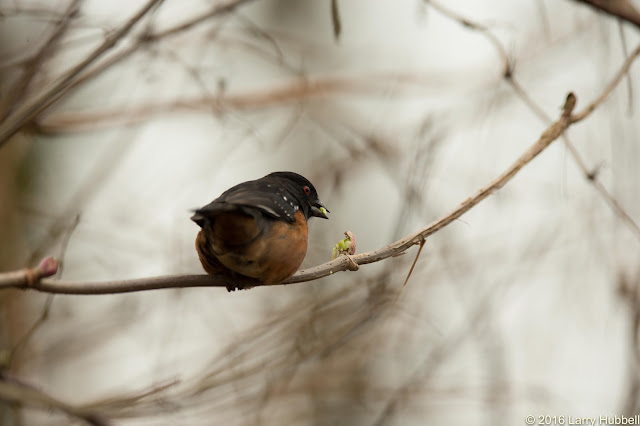 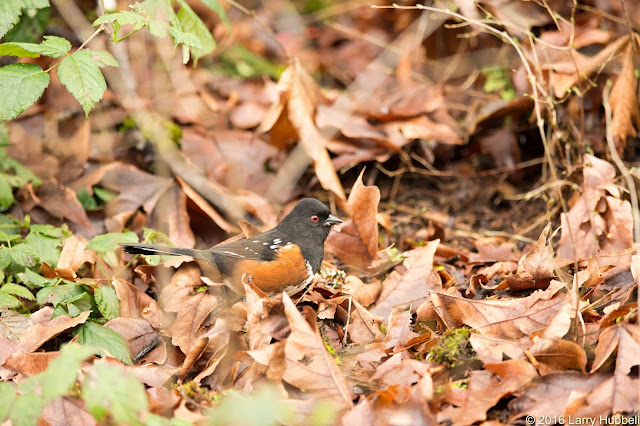 Encouraging towhees to visit your yard is actually very easy, and good for your plants as well. Simply rake four or five inches of leaves into your flower beds and let them sit. They will help keep your plants warm and in time they will decompose and feed your flora. 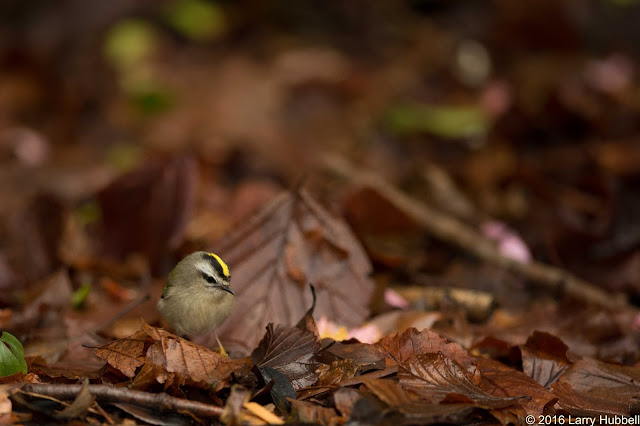 In the winter, when times are tough, other bird species will also search the fallen leaves for food. This golden-crowned kinglet is an example I spotted in the Arboretum in December.

Sometimes I wonder how it is that we have come to call a perfectly natural part of the life cycle of trees - leaf litter. The term seems to falsely imply that the leaves need to be cleaned up.

If your leaves are left to behave naturally, towhees and other birds are likely to come to your yard searching for food, especially if you do not use pesticides. Also, come springtime if you keep your cat indoors the towhees may even build a nest on or near the ground, carefully hidden among your leaves.

A leafless and insect-free flower bed may meet some standard definition of winter beauty. However, a flower bed filled with leaves, towhees and other natives birds displays a deeper beauty - one which is more diverse, rich and filled with life.

Note: In the comments section Max mentioned that he had heard that Snowberries are poisonous. I found, via This Link By Valerie Easton, that she thinks they will generally not hurt us because our bodies do not absorb much of the poison. (However, I have no desire to run out and give them a try.) What was most interesting was her statement regarding Native Americans using the berries to poison fish. Amazing!