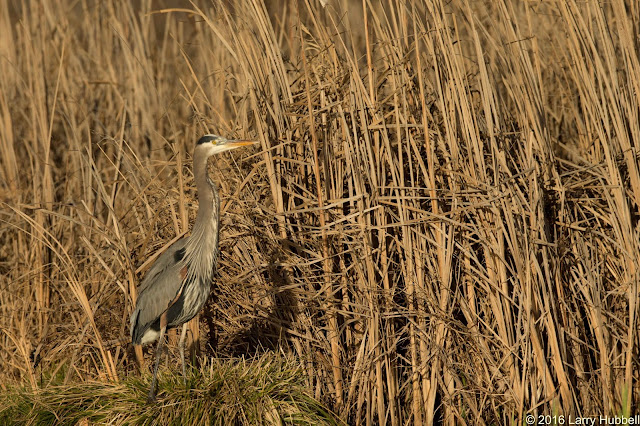 Winter in Seattle can be dismal, gray and wet. It causes us to cherish thoughts of Spring, like a hot cup of coffee held with cold, trembling fingers. In this late January photo, a great blue heron stands in the midst of dried cattails blowing in the winter's wind. Near the bird's feet there is just a hint green - maybe an early sign of Spring. 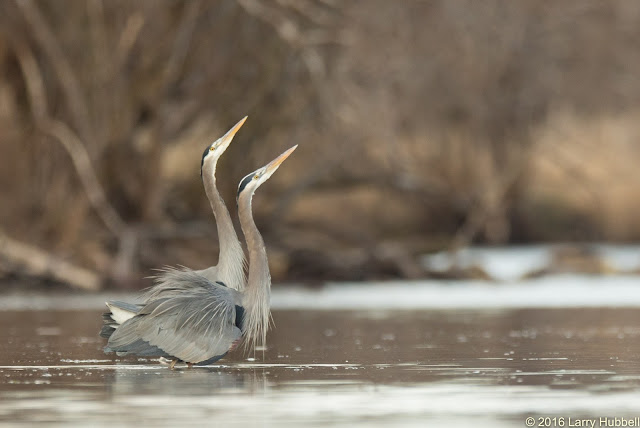 Two days later, I chanced upon this pair of herons performing a slow moving dance in the same general area. They moved with measured steps. It was a careful, reflective choreography - moving together almost as if they were mirrored images. I was drifting slowly around one of the small islets on Union Bay when the distant birds became visible. I sat transfixed, camera clicking softly, arms burning, wishing I was closer but fearing to make any move which might interrupt their magical performance. 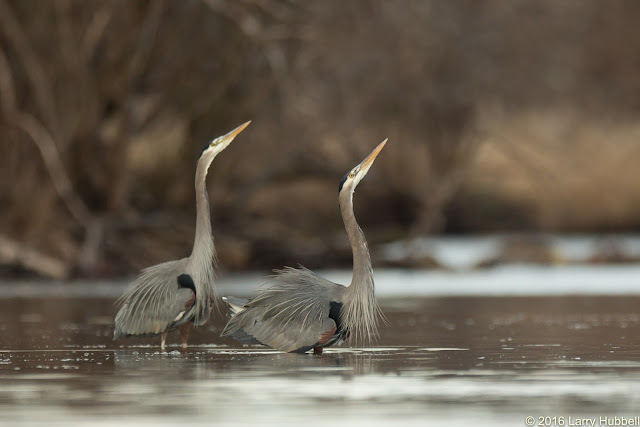 I suppose their behavior might have been territorial, however it felt like a mating dance - slow, respectful and without any obvious signs of intimidation. Together, they waded out towards deeper water. The colors of the flora in these photos show no signs of life. However the flashes of exposed black shoulder patches and burnt orange on their upper thighs, along with the birds' unusual maneuvers inspired thoughts of Spring. 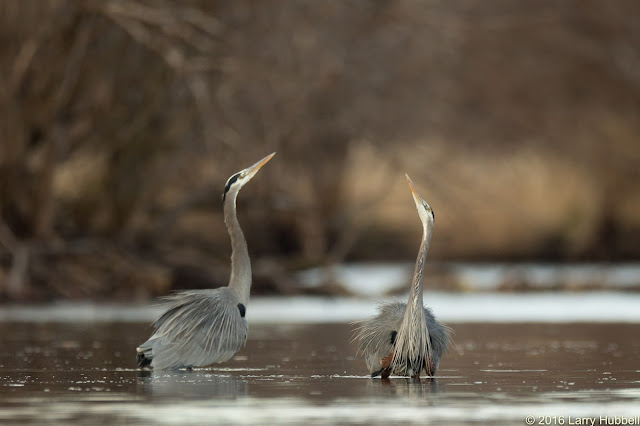 Necks erect, feathers splayed, beaks at attention, the slow dance shifted from side-by-side to a more dangerous and exposed face-to-face interaction. I am not a scientist, but it seems to me that this is a position of trust. If these birds were thinking of attacking each other I would expect their wings to be extended and waving for balance as they looked for weaknesses and an opportunity to strike. Their calm slow behavior, with wings tucked carefully away, helped me to conclude this must be a mating ritual. 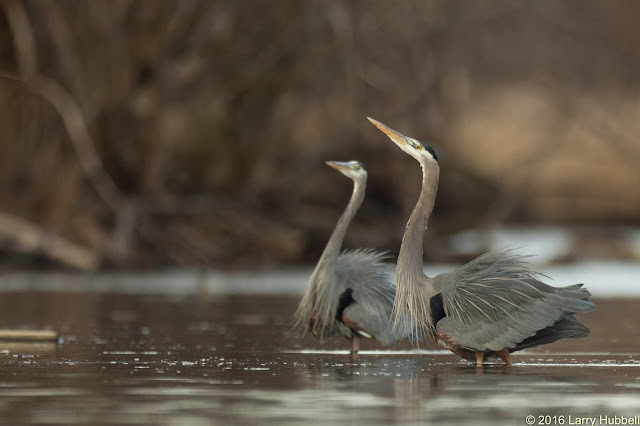 The plumes of feathers hanging down below their necks are not uncommon, but look surprisingly stiff. This was the first time I have ever noticed the plume-like feathers held erect above their backs and sides. 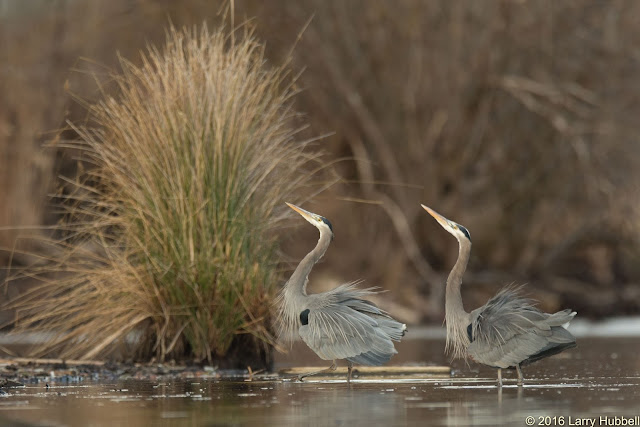 As the birds marched slowly back toward shore another touch of green entered the photo. 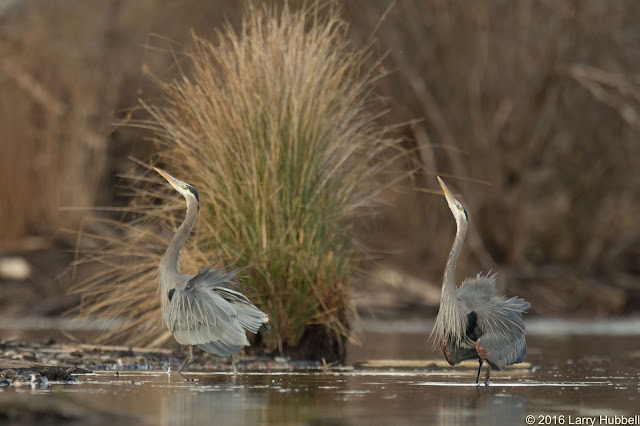 As their display ended they turned slowly away. The herons took up positions roughly 40 yards apart. For a time, they maintained a constant visual contact. 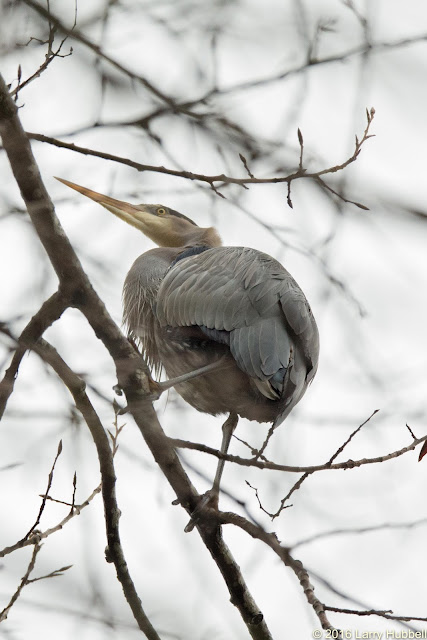 Two days later, while watching ducks from the shore of Foster Island, I experienced the feeling of being watched. Looking up, I found a heron sitting silently above me. We both felt uneasy, though for very different reasons. I was highly inspired not to scare the bird as they often defecate just prior to flying. Herons in trees look precarious and ungainly. However, they do nest in trees, so when I see one perched overhead it does make me think "Spring is in the air." 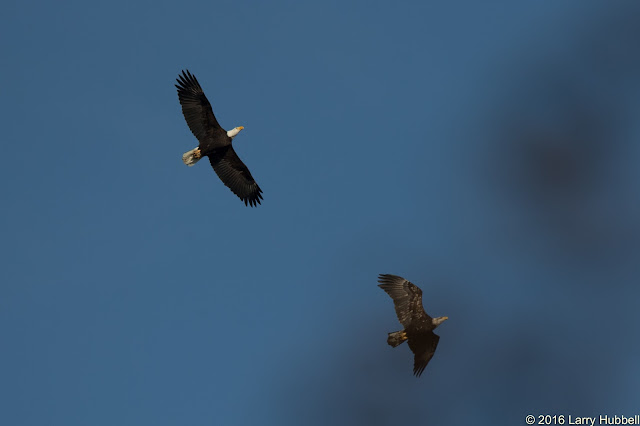 Another sure sign of Spring is Eva and Albert spending more time in their nesting tree. This week, one of them spotted an immature eagle near Foster Island and came blitzing out from the nest site. When the youngster reached the airspace between Marsh Island and Duck Bay the adult acquiesced and headed back to Broadmoor.

From the look of the young eagle I believe it is the same bird we saw in mid-January. Click here to read the story. Eva and Albert seem very consistent about their territorial boundaries. The young bird continues to wander over and above the invisible lines however the mature birds seem to realize...repetition is the key to learning. 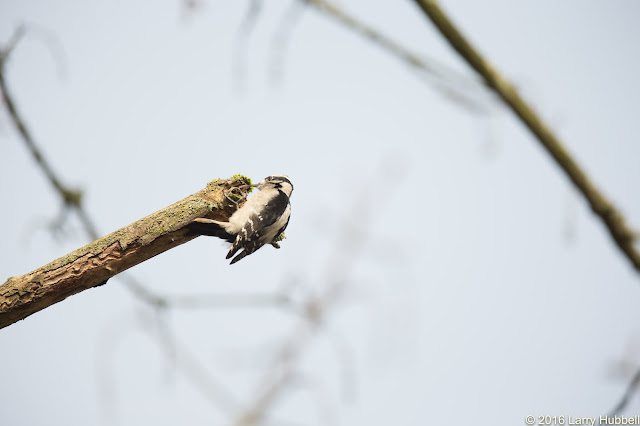 Earlier, I came across this female downy woodpecker feeding about twenty feet off the ground. She may not have realized she was pushing up against a "glass-ceiling". 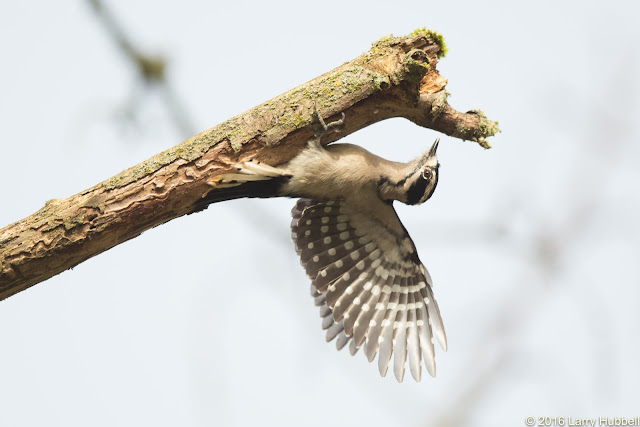 When she spotted a male downy, moving in to restrict her feeding height, she moved below the branch for protection, just prior to taking flight. (It amazes me how my eyes focus on the white spots on her black wings and how easily I forget that I am actually looking at individual feathers which are perpendicular to the pattern. Nature's camouflage does not require color coordination... 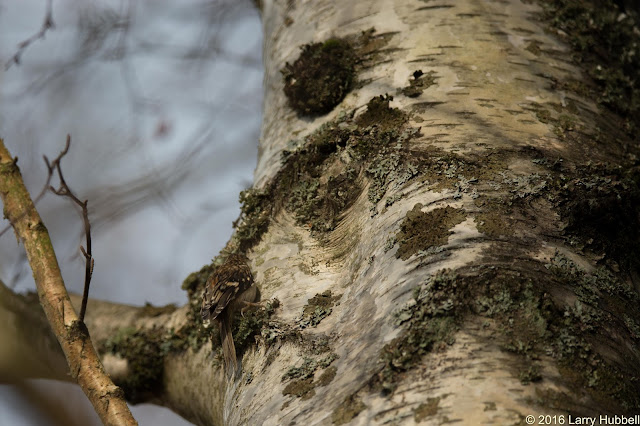 ...however, sometimes it helps. Can you spot the brown creeper in this photo? When taking the photo I actually thought the bird would be easy to see against the white bark of the birch tree. I was wrong.) 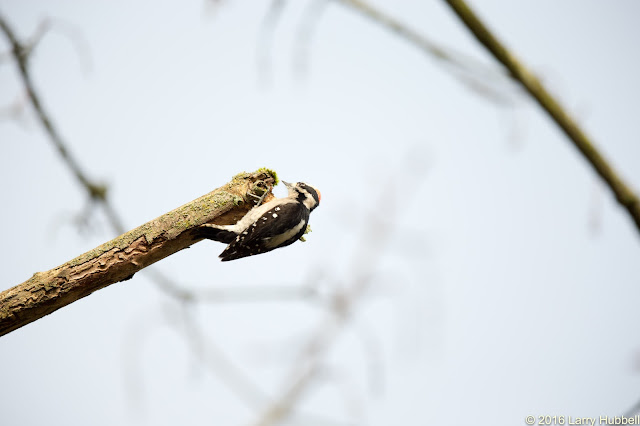 The male takes over the site, and the feeding, before following after the female. Among downy woodpeckers the males get the higher, smaller branches, while the females are relegated to lower, larger branches. Maybe this behavior evolved so the males would have a wider field of view and be better able to defend the females from intruders. Downy's seem similar to humans, since both have intertwined feeding behaviors and mating relationships - kind of like dinner and dating. Maybe it is just happenstance, but I have only noticed the enforcement of this "glass-ceiling" behavior just prior to nest building and the mating season. 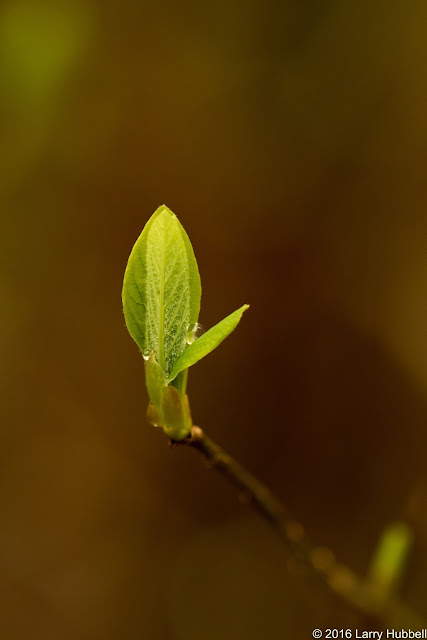 An indian plum leafing out... 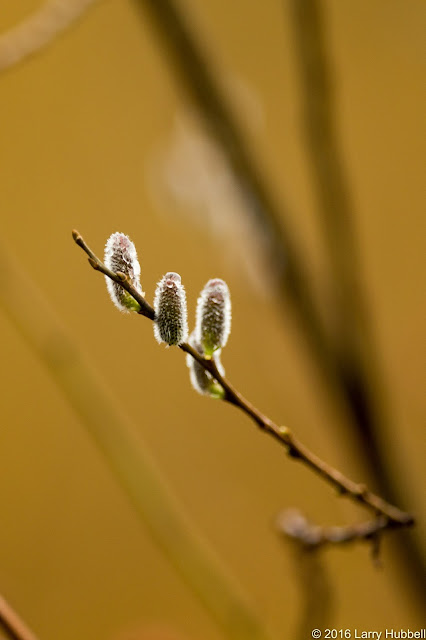 Have a great day on Union Bay...where the dream of Spring is in the air!

PS: The creeper is in the lower left quadrant of the photo, on the trunk near the base of the branch.