Thursday was gray, cloudy and wet. Around noon the rain let up. I headed to the Arboretum in hopes of finding a few birds to photograph. As the sun shone between the clouds, red-winged blackbirds sang and a robin bathed in the freshly fallen rain. 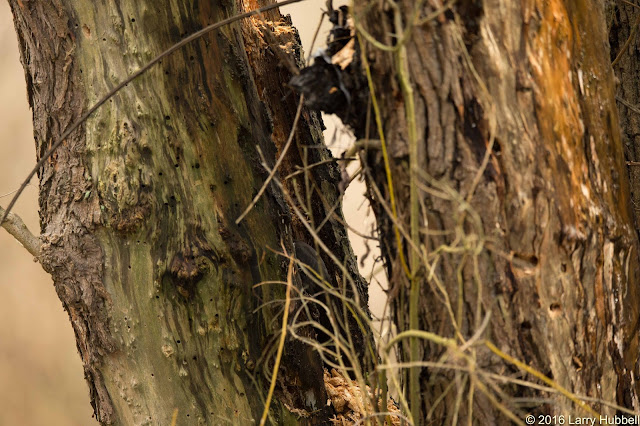 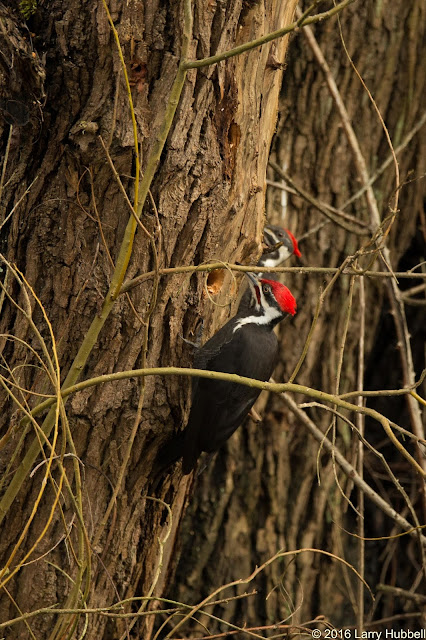 A few days earlier I saw them working side-by-side in the same tree. They fed for awhile but when it came time to head home they each went in different directions. It made me think that maybe they were doing the woodpecker equivalent of dating. They do not appear to be spending their nights in close proximity. 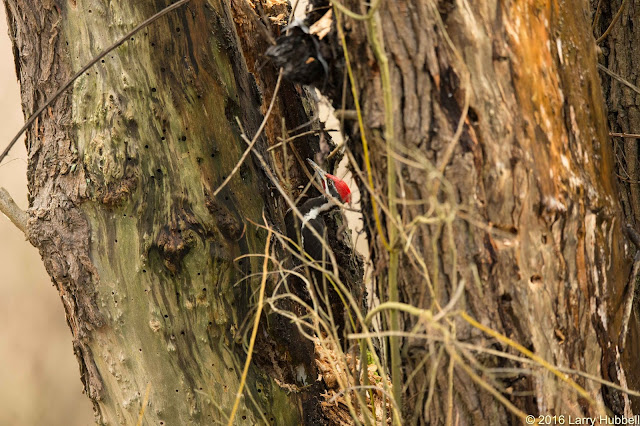 A sudden flash of a bright red alerted me to the fact that Chip was working inside the decomposing tree once again. In this hidden back-water of Union Bay near Elderberry Island, the willow trees grow, fall and rot in the wetlands. Often what looks like a dead tree laying on the ground will sprout vertical branches that end up becoming a row of "new" trees growing side-by side. The willow and the decomposing alder in the area may look unkempt, but they are a critical feeding habitat for ants and bugs that the pileated woodpeckers, flickers, downy woodpeckers and others depend on for food. These messy looking spots are some of the most productive parts of our city's ecosystem.

Most of the time Chip was virtually invisible while feeding inside the tree. However every few seconds his head would pop up and he would check for any signs of danger. 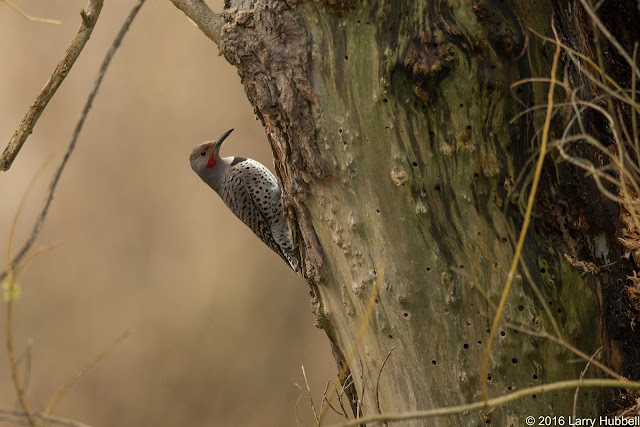 Whenever pileated woodpeckers excavate for food, other birds like this male flicker often come looking for leftovers. 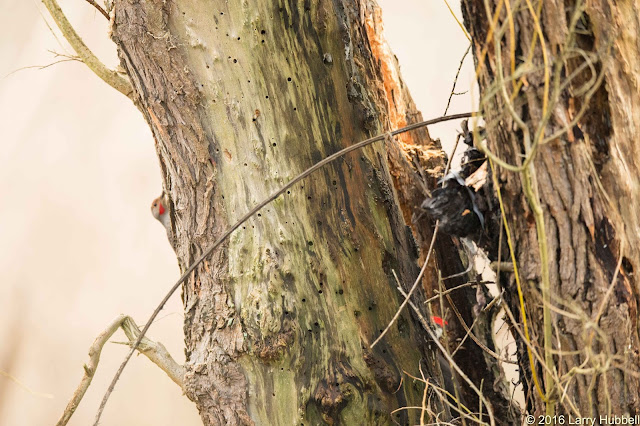 When the flicker landed on the outside of the tree where Chip was working, Chip must have been alerted by the vibrations as he immediately came out and looked around. 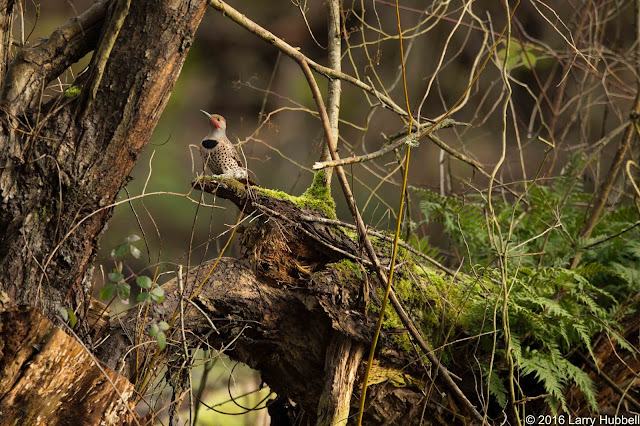 The flicker relocated to a safe distance. 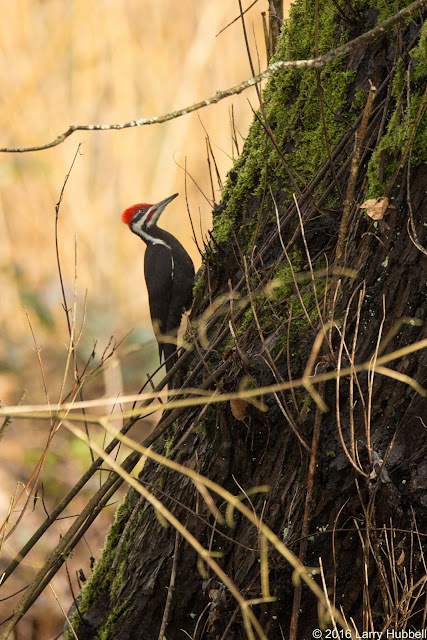 Once Chip was full, and most likely covered with a fine dusting of wood chips, he flew to the backside of reclining willow tree. Slowly, he hopped backwards down the side of the tree. 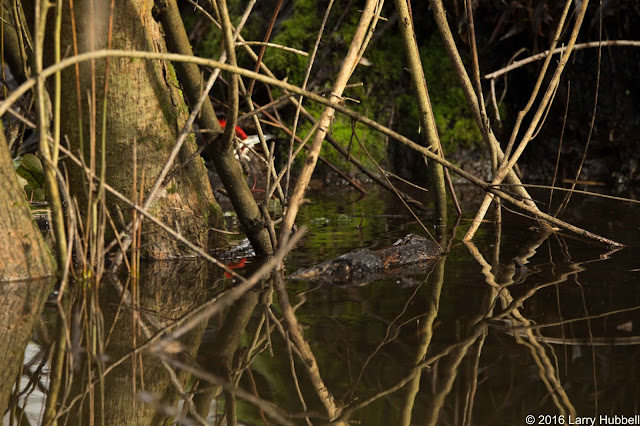 Chip spent a few moments in the water at the base of the tree. I suspected he was bathing, but the obscuring cluster of trees, branches and twigs made it hard to be sure. I would guess he picked this hidden location because it would be more difficult for earthbound-predators to approach him while he had his head in the water. 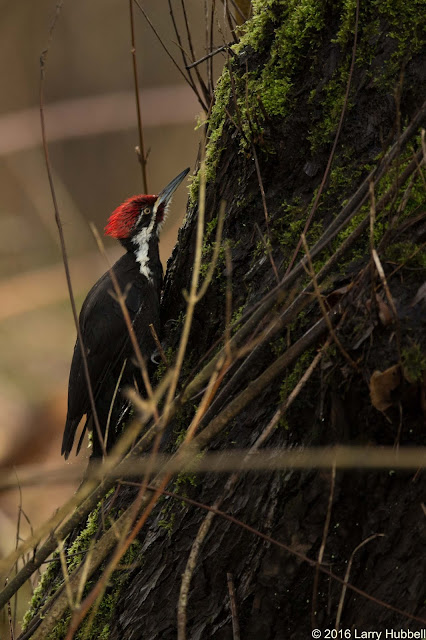 Afterwards, Chip climbed back up the tree with his feathers looking a bit damp. 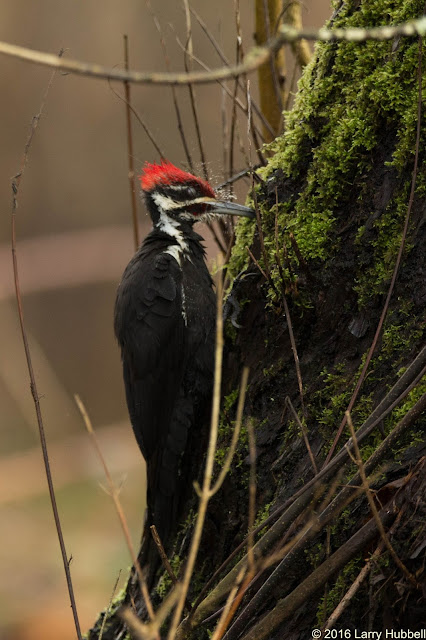 Any doubt about whether he had been bathing evaporated when I saw this spray of water come off of his head. 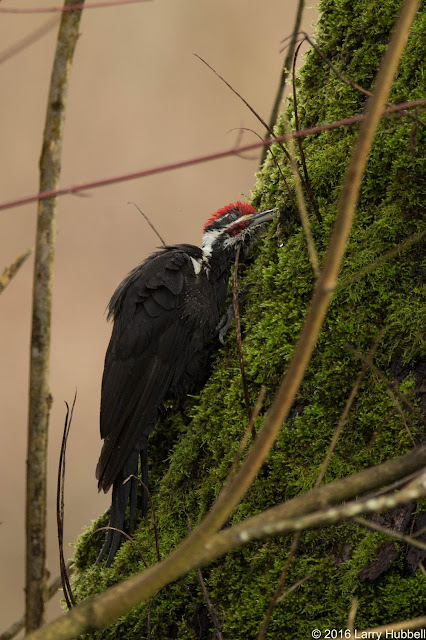 Not having a bath towel, Chip used the moss to wipe away as much of the remaining water as possible. 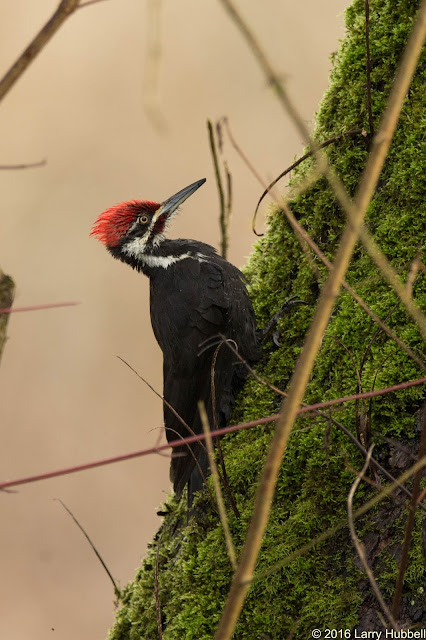 He still ended up with a kind of damp, fresh-out-of-the-shower look. 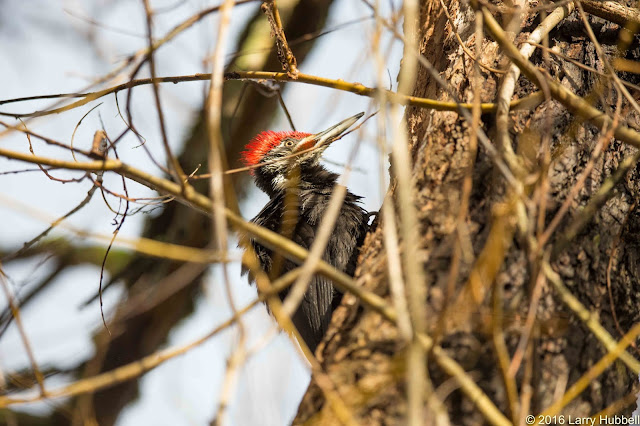 His next stop was in a higher and more sunlit tree... 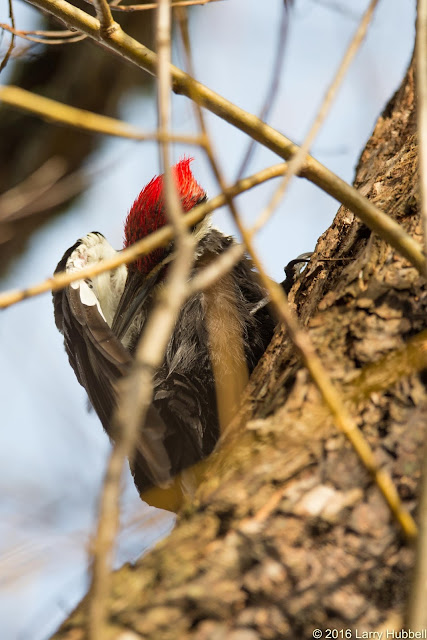 ...where the preening and cleaning continued. 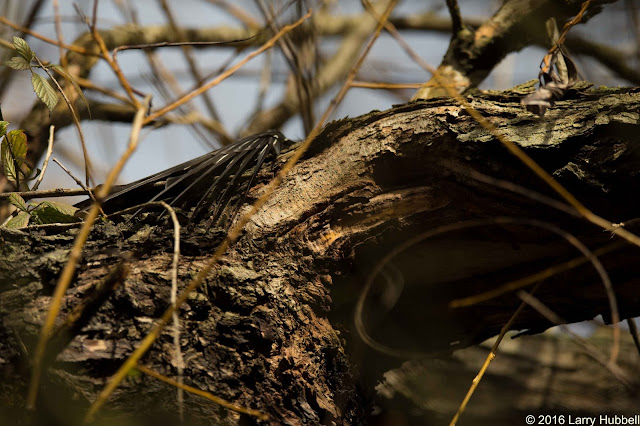 Chip must have spread his wings to dry them in the sun, but given the angle, all I could see were a few of his wing feathers hanging over the side of the branch. 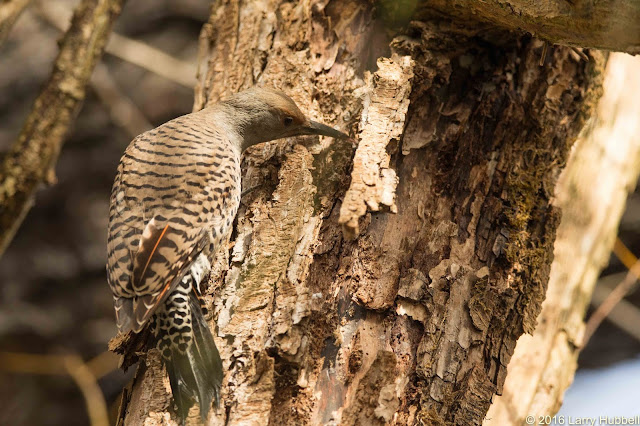 Another flicker, a female this time, landed below him and started looking for food. 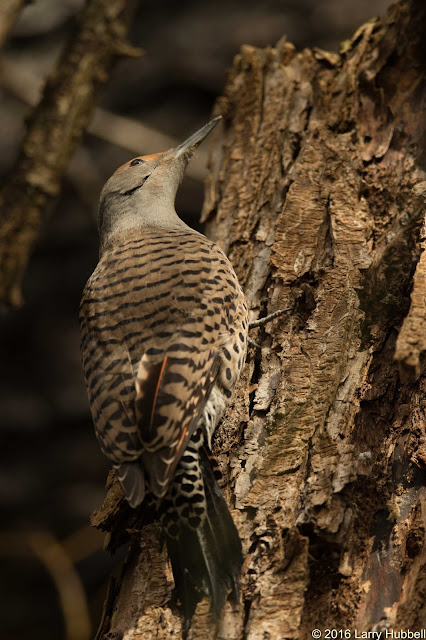 She was clearly paying attention to Chip's every move. Chip may not have the rock star attitude of Elvis, the previous male pileated who used to spend time in the area, but the flickers that follow him around do seem to be forming a fan club.

PS: By the way, if you look very closely at the first photo, Chip's back in barely visible while his head is completely hidden inside the tree.