A River of Wood 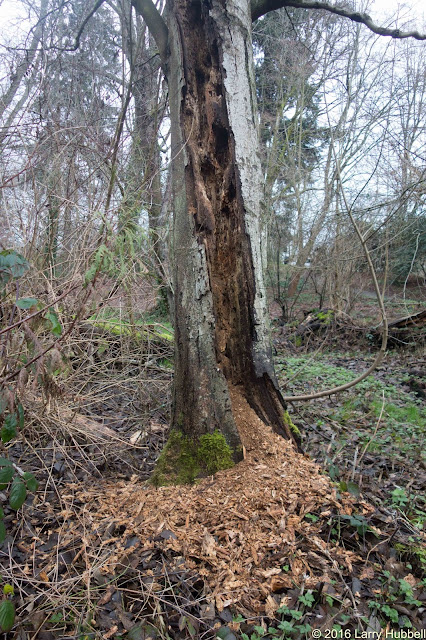 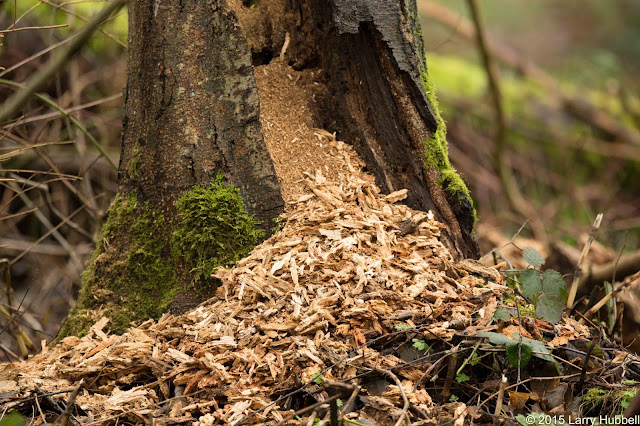 The wood chips flow like a stream from the heart of the tree.

After 50 or 60 years the heart of an alder begins to decompose. The soft wood attracts insects like carpenter ants. The ants and their young provide food for a variety of birds. During one visit last week I saw song sparrows, varied thrush and pileated woodpeckers searching for food among these chips. 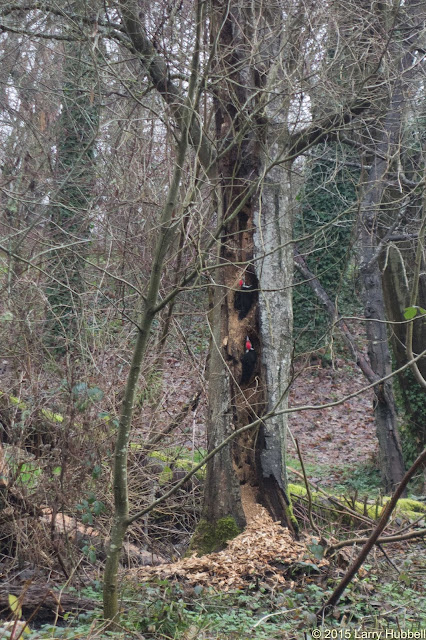 Did a tree like this inspire the first dugout canoe?

It is easy to miss the pileated woodpeckers working inside the tree. From most angles they are completely hidden. A mature pileated woodpecker can be over a foot and a half in length. Their size, relative to the tree shows the scale of their operation. 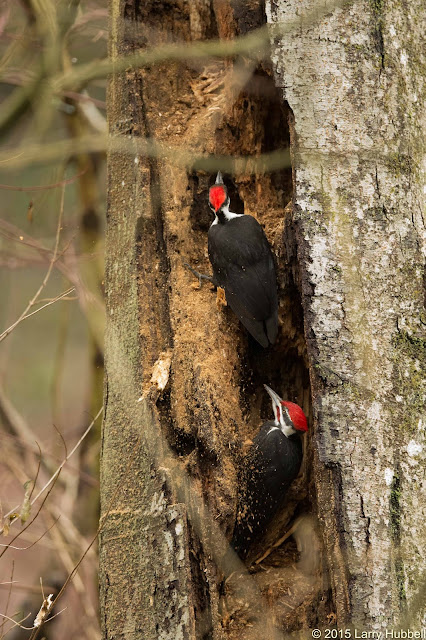 Storm breaks loose a flood of chips, while searching for food, the male ducks for cover.

I am virtually positive the female in this alder is Storm. A few days later, I found her feeding in the same tree again. At the end of the day, I followed her flight from the alder back to her roost in the cottonwood near Foster Island. 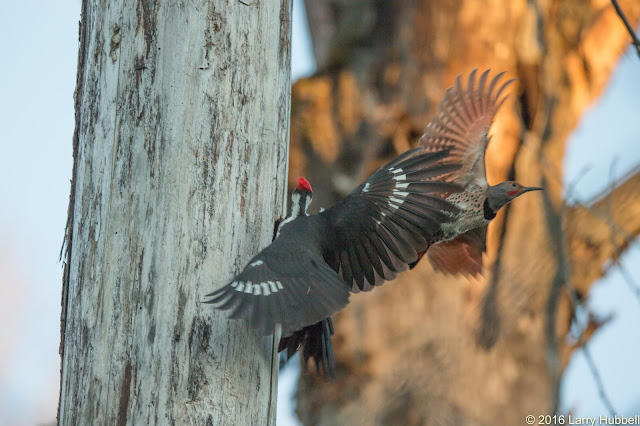 Storm surprising a male flicker in her roost.

You can hardly blame the flicker for attempting to use the roost. Especially since he may have been the one who excavated the initial hole last Spring. I am sure he was amazed to find the hole had been significantly enlarged. On the other hand, you would think he should have had second thoughts about waiting around for the new owner to return. 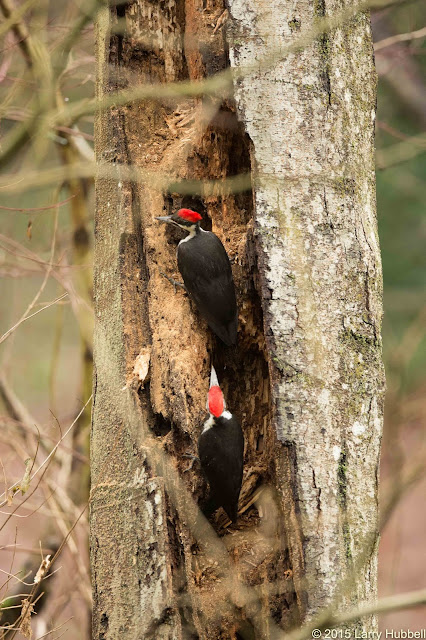 The male pileated looking up as if to say, "Hey would you watch it with all the wood chips!"
Storm's nonchalant glance seemed to imply, "You are totally free to feed at the feet of someone else."

Both the alder and the cottonwood - which contains Storm's roost - are dead or dying trees. It may seem odd to think of a dead tree as a key to life. However, decomposing is just as important as any other step in the life cycle of a tree or forest.

The alder is one of the first trees to take root after disturbances like fires, floods, windstorms or clearcuts. During its relatively short life span it grows quickly and takes in nitrogen from the air. Then, as it decomposes it provides nitrogen to the soil which allows other plants and trees - like elderberry, douglas fir and western red cedar - to flourish.

Cottonwoods require a lot of water, so they often grow along the shore. The living cottonwoods provide seeds that float down in the Spring and feed the young mallard ducklings. They also provide nesting sites and hunting perches for bald eagles. Cottonwood branches are often used by the eagles to build their nests.

Beavers like to eat through the cambium layer around the base of cottonwood trees. This leaves dead trees standing along the water's edge. The decaying trees also attract insects and woodpeckers. The woodpecker holes provide sanctuaries to a variety of creatures, like squirrels, wood ducks, raccoons, starlings and others. Some small birds, like nuthatches and chickadees, even excavate their own nesting sites in the soft wood. Eventually, the trees fall. Before the branches decompose, beavers use them to build their lodges and dams. The constructions enhance the habitat for fish, which provide food for eagles, osprey, cormorants, grebes, herons, kingfishers and salmon. When salmon return to spawn in forest streams, their decomposing bodies provide nutrients that help the trees grow.

Leaving dead trees and fallen leaves in our parks and yards may seem unsightly and careless, but when any link in the cycle is broken the whole ecosystem is weakened. 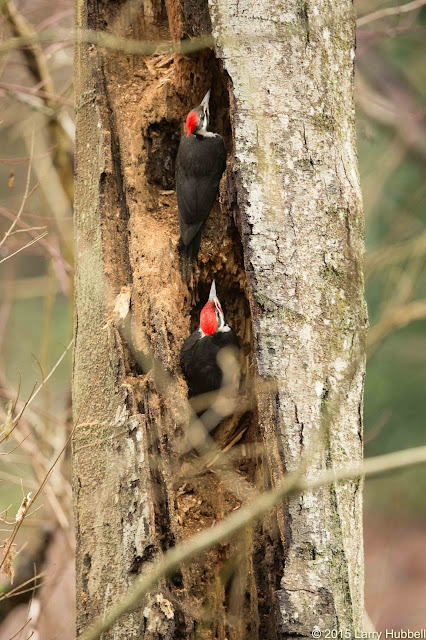 This photo provides a unique angle to view the top of the bird's heads.

You can see a hint of one of the red malar stripes on the right cheek of the male. However, there is another gender identifier that is a bit easier to see. The red on the head of the male completely covers his forehead and extends all the way to his beak. 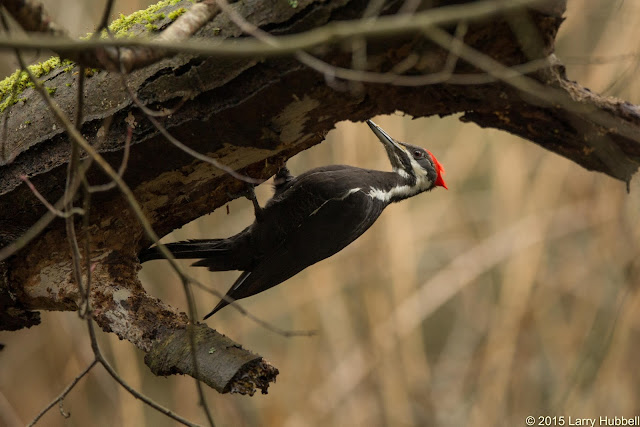 Initially, when I heard Storm calling I followed her from one tree to the next. 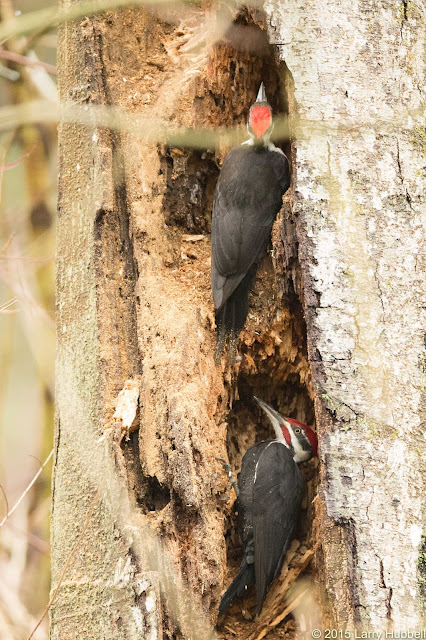 Storm ended up in this alder tree.

The male, I am thinking of calling him Chip, was already in the tree working quietly. He did not answer any of Storm's calls. In previous years, when Elvis and Priscilla were out feeding together they called to each other every five to ten minutes. Sometimes they would be fifty to a hundred feet apart but vocally they kept in contact as they moved about. Chip's non-responsive behavior, and the fact that I often find Storm by herself, makes me wonder if Storm and Chip are actually a mated pair. 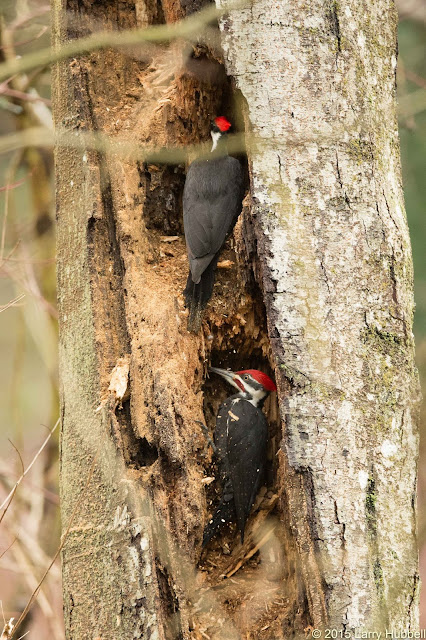 For example, later this week, while I was watching Storm return to her roost alone, I saw a male pileated fly over her head. The male appeared to be heading from Foster Island to Interlaken Park. Storm called out once but there was no answer, and the male proceeded on his way. Evidently, having a meal together may not imply a long-term relationship.

It will certainly be interesting to see what happens come Spring.

This week, I received an email from Christine Southwick regarding last week's hummingbird post. Christine confirmed that a male and female Anna's hummingbird, interacting on the ground is most likely mating behavior. It was surprising to me, to learn that Anna's hummingbirds are mating this early in the year.

Christine is the President of the Puget Sound Bird Observatory (PBSO). The mission of PBSO is, "...to study birds and their habitats in the Pacific Northwest to better understanding changes in bird populations, to inform decision makers, and to engage the public with birds and their needs." Their website, pugetsoundbirds.org, lists a number of volunteer projects and opportunities for those interested in birds!