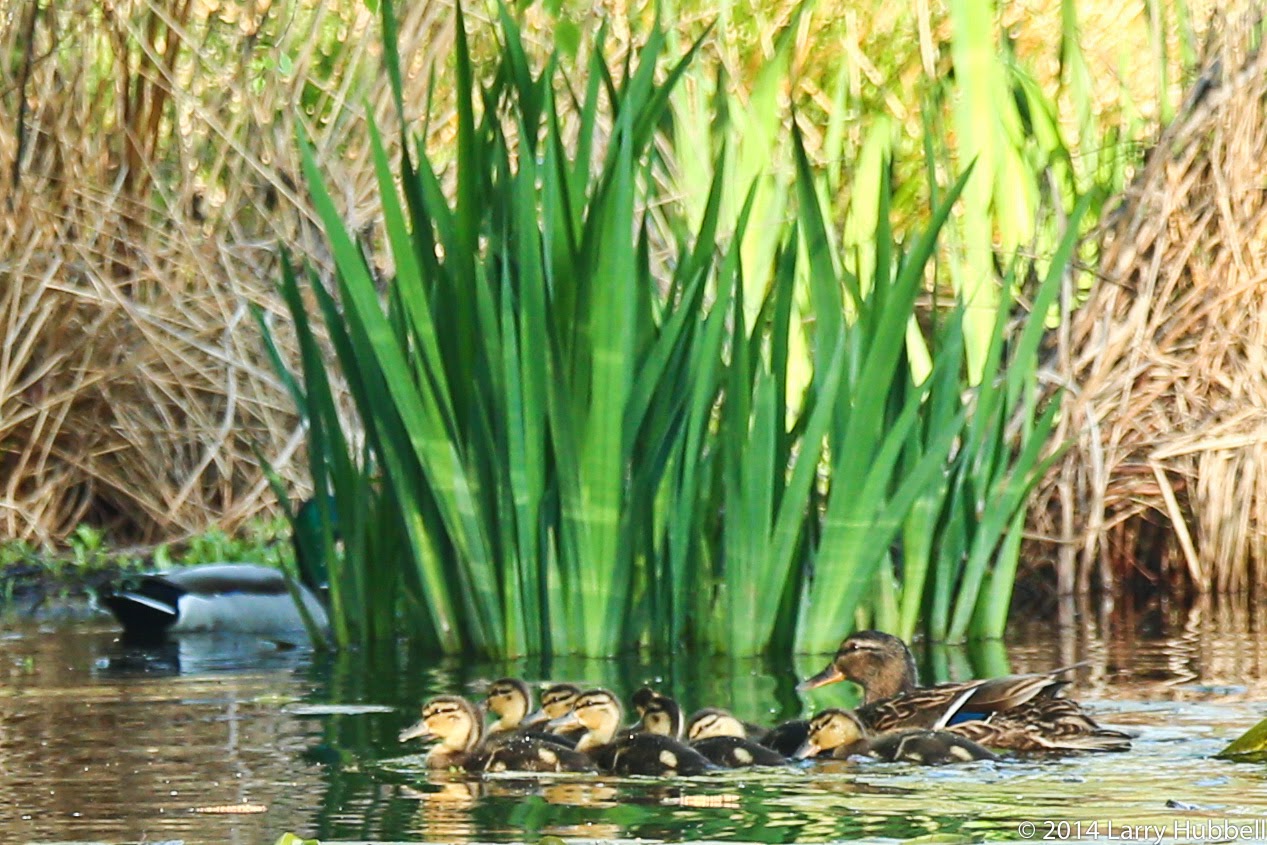 Yesterday, not long after dawn, this female Mallard hastily herded her brood across the open water between Foster Island and Duck Bay Island. Laying the eggs and incubating them until they hatch is of course only the beginning of her labor of love. Luckily her mate is not totally out of the picture, but clearly he is not nearly as attentive as the mother. 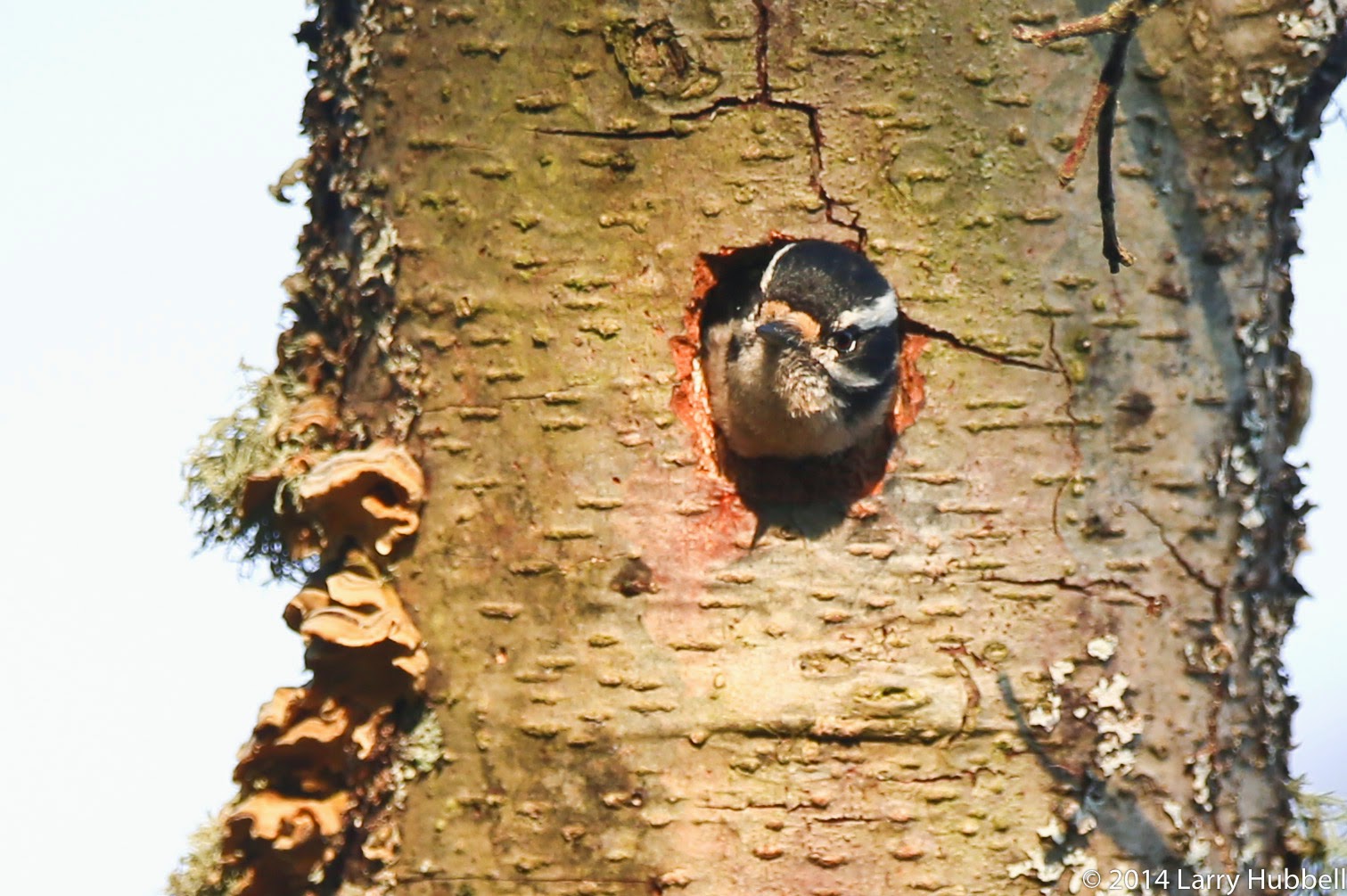 A few minutes earlier the female downy woodpecker could be seen looking out from the nesting hole provided by her mate. 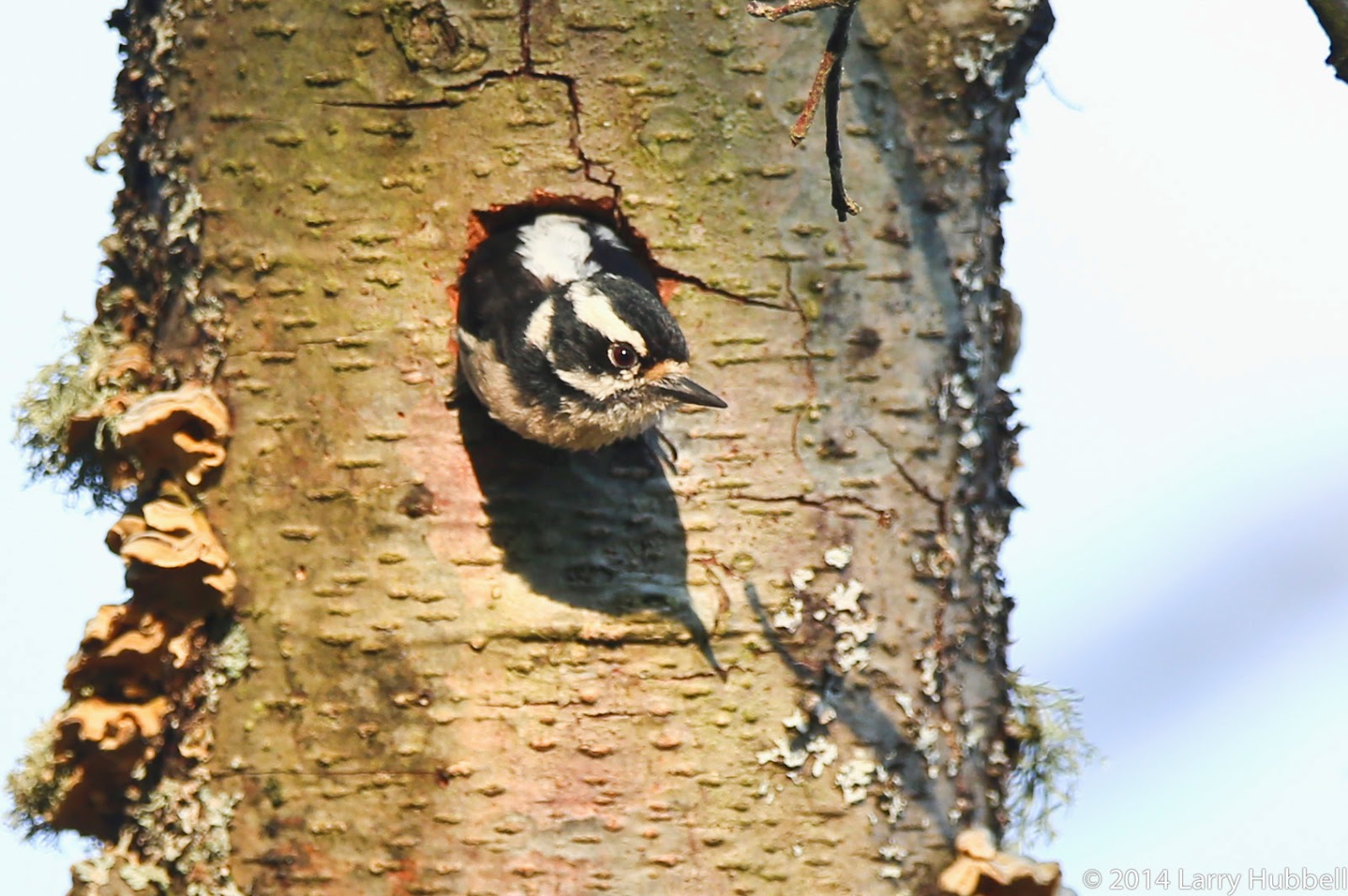 She looked first to the left and then to the right… 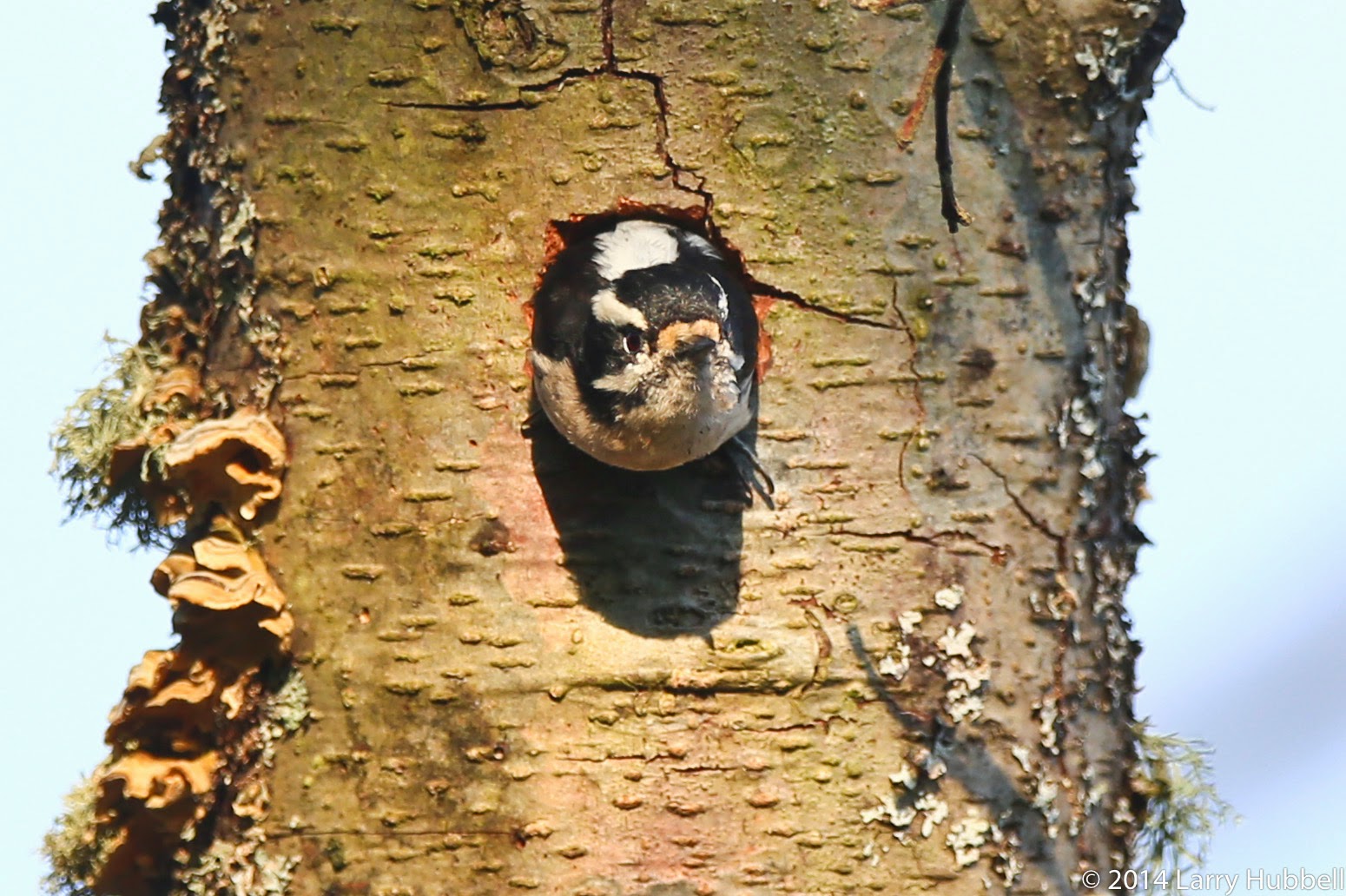 …before pushing her way out of the nest. It appears the tight fit of the entry hole is designed to minimize the size of possible intruders. 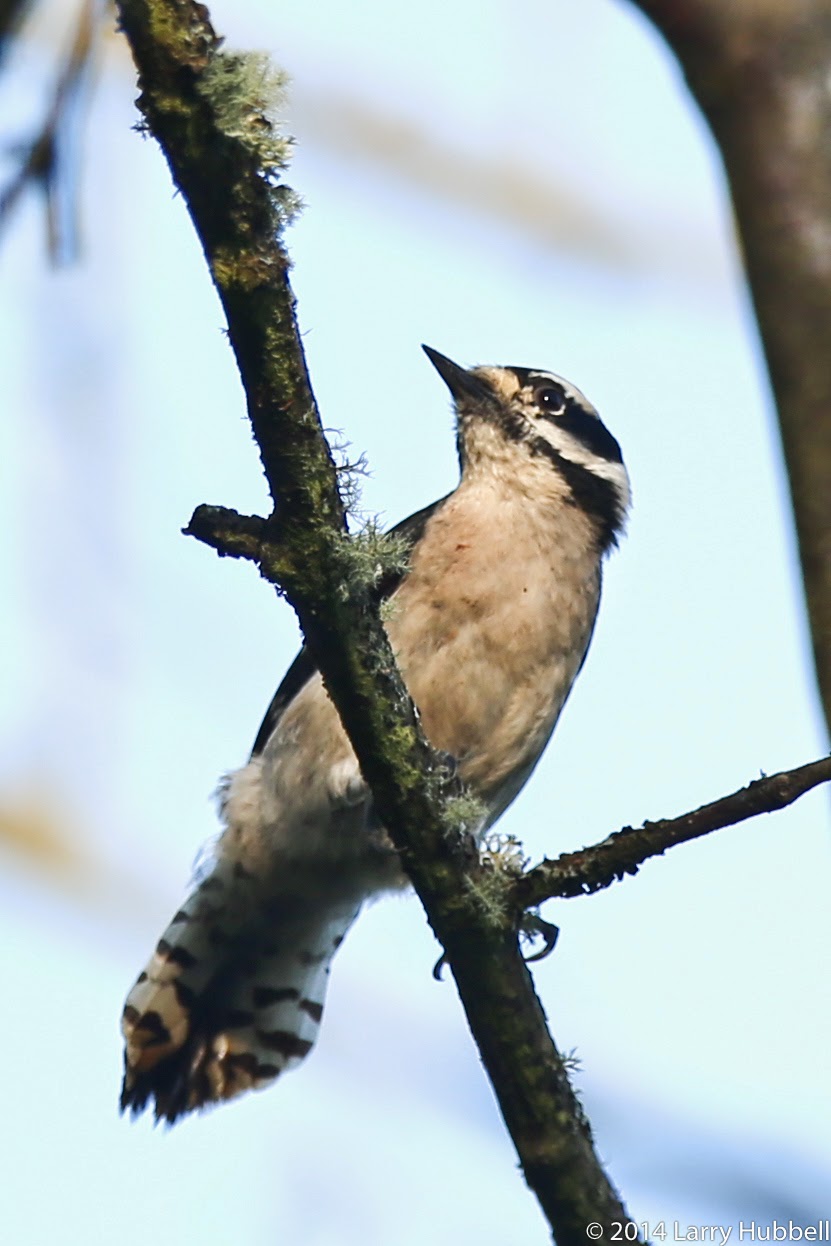 She landed on a nearby branch from which she could watch her mate. The Downy Woodpeckers are very fun to watch due in part to their superior coordination.  The female was seen at one point hopping backwards along the top of a branch and the male was seen throwing himself off a branch and falling about three feet before spreading his wings to fly. 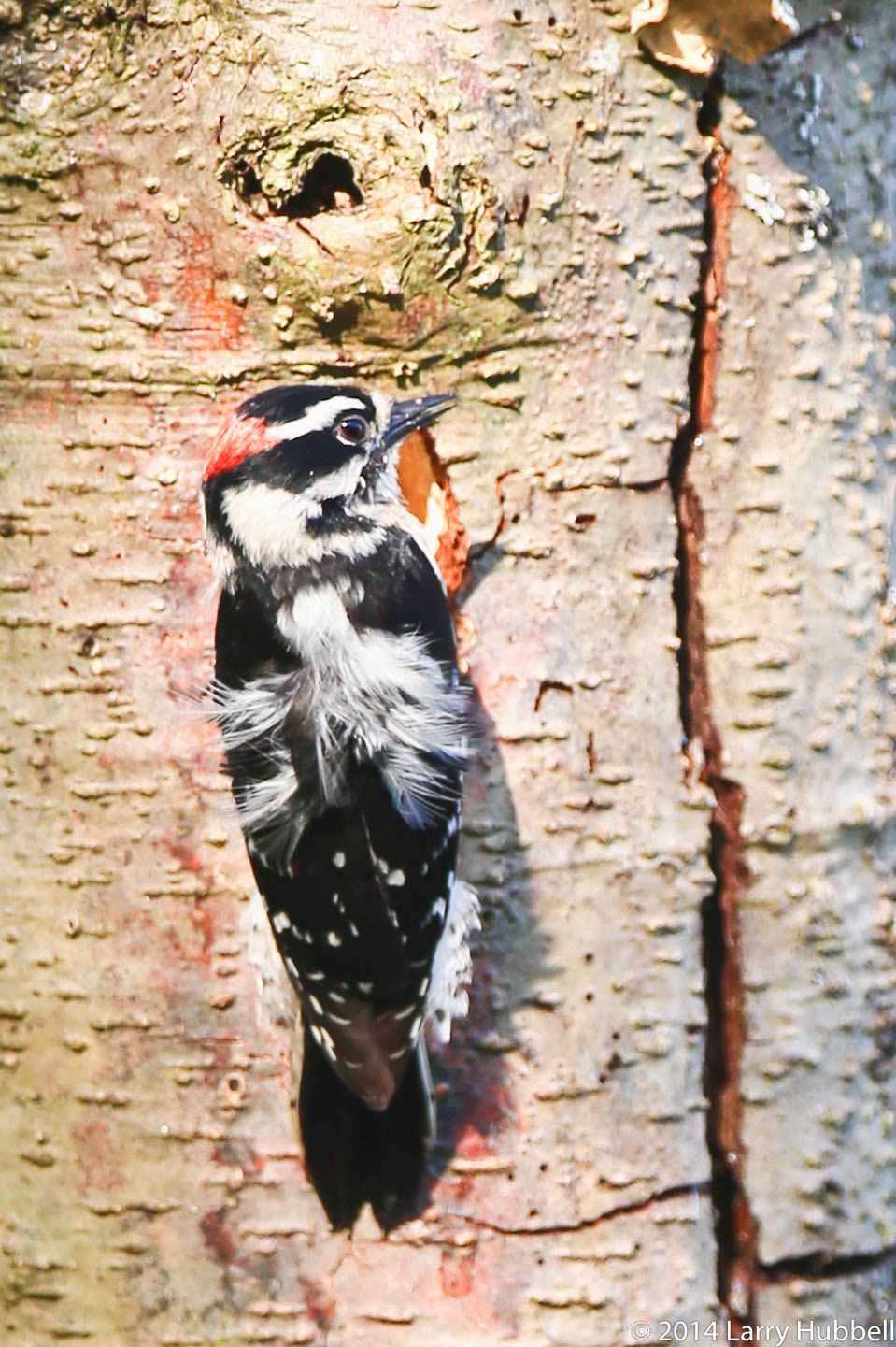 Even though the female seems satisfied with the nest, the male is still working away on a second hole about three or four feet below the completed nest. (You can tell how tight the entry is by looking at the ruffled feathers on the back of the male bird.) The purpose of this second hole is a bit of a mystery. Will it still be an alternate nesting site? Will the female move to the new hole when it is complete? Has she laid eggs in the upper hole already?
In any case the male's motivation for this labor of love is quite clear. 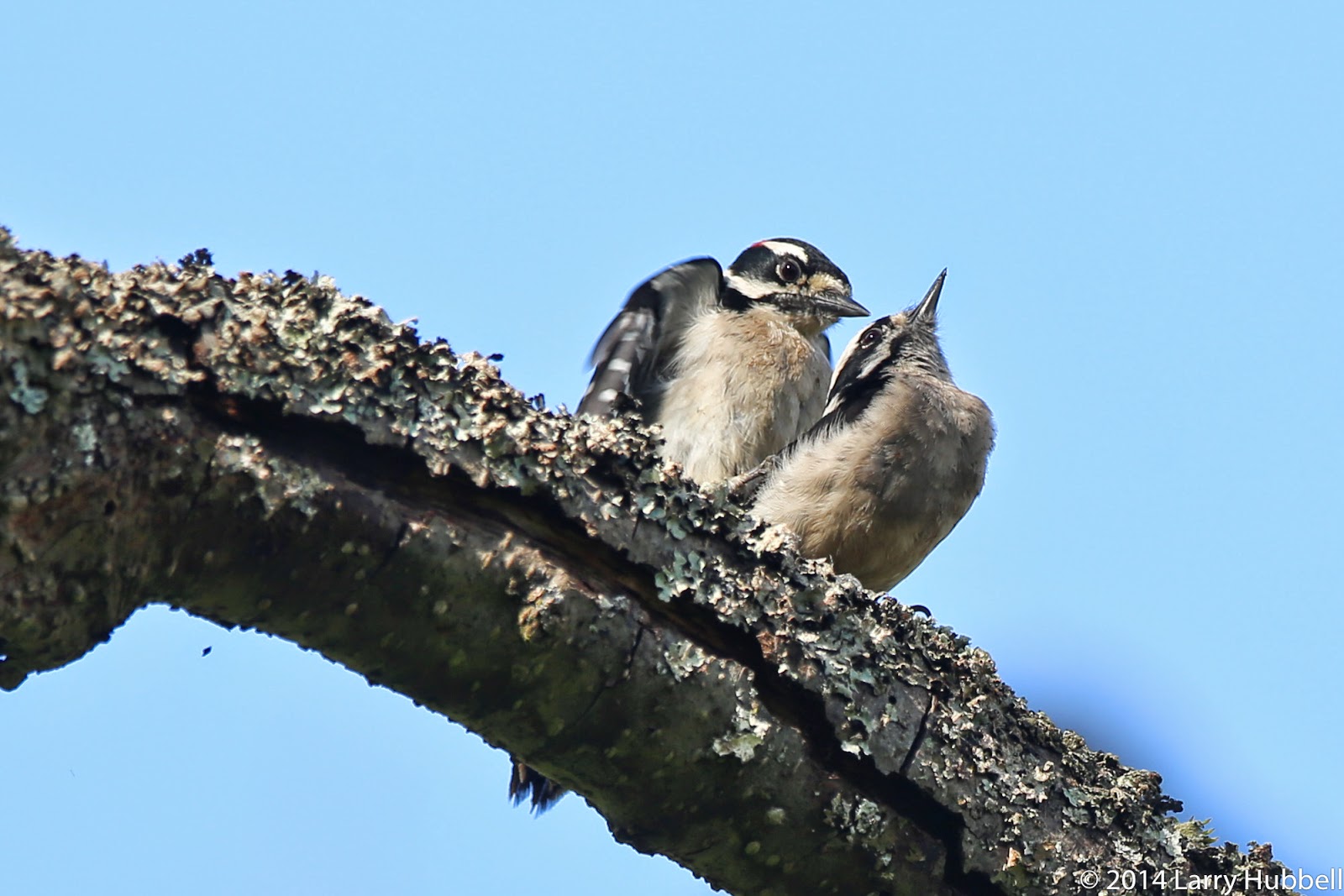 On Monday the pair was seen mating on a branch of the nesting tree. 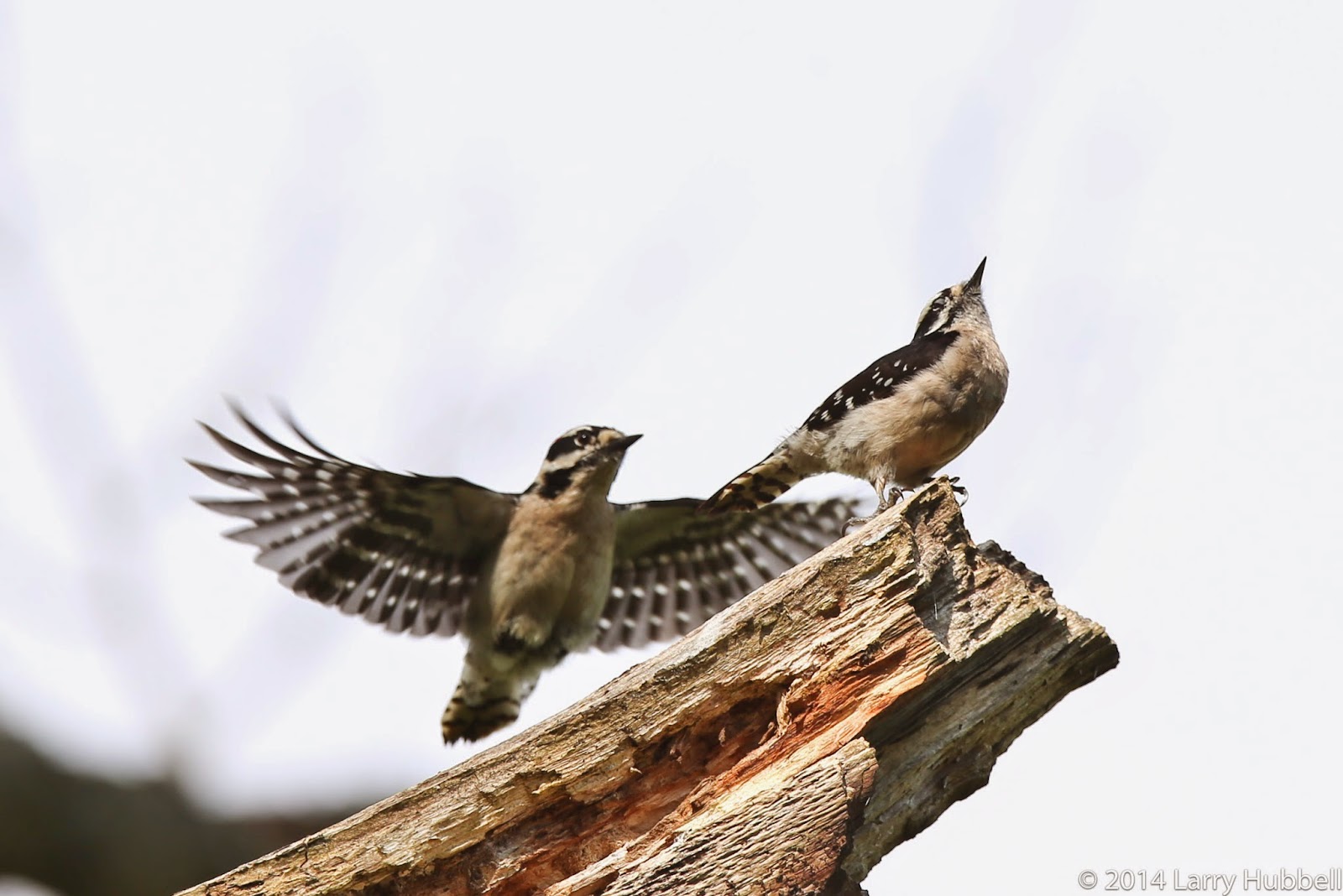 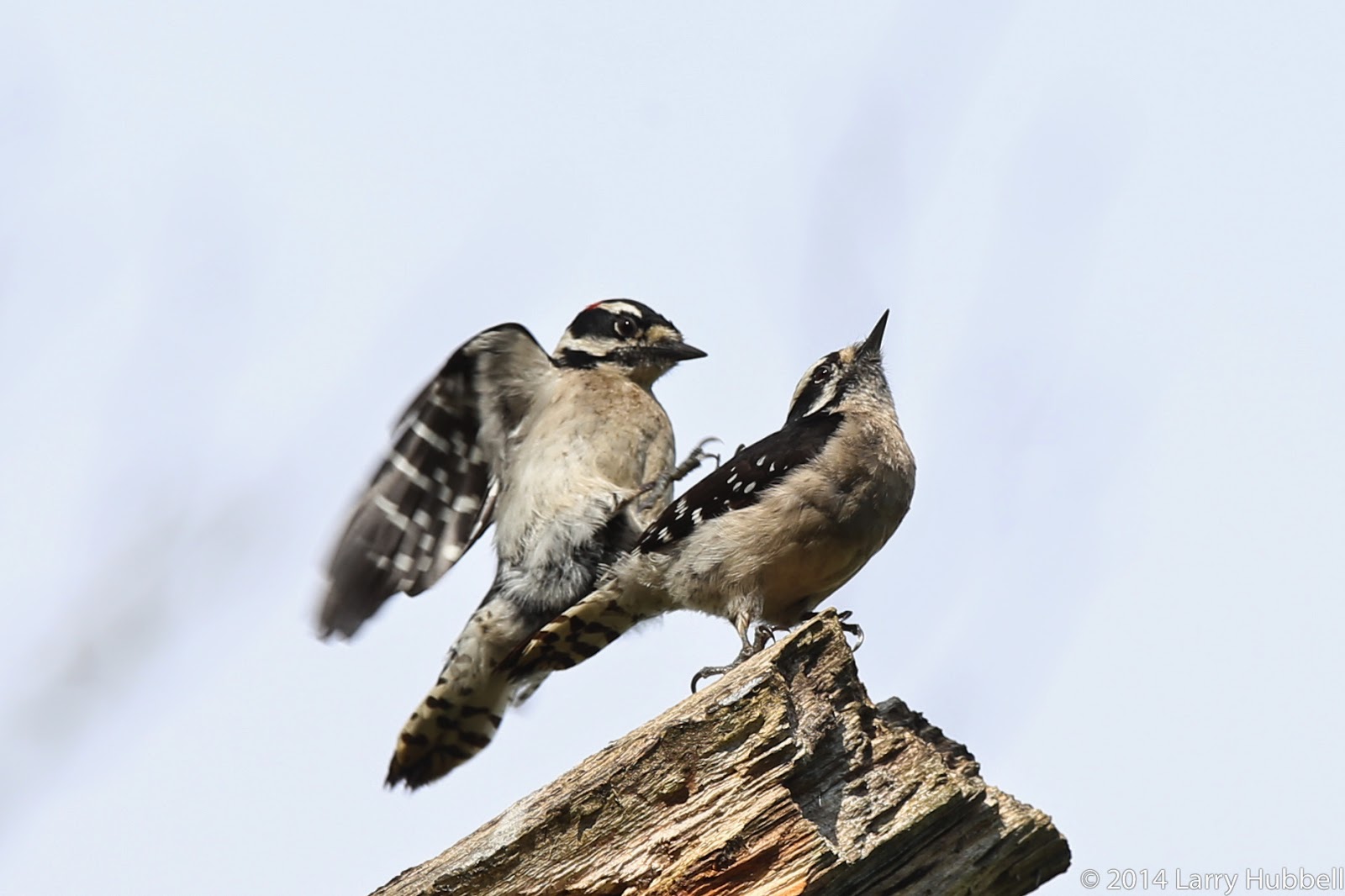 …they repeated the process on the other side of the tree. Cornell says the incubation period is about 12 days, but the unknown in the process is when the eggs will be laid. 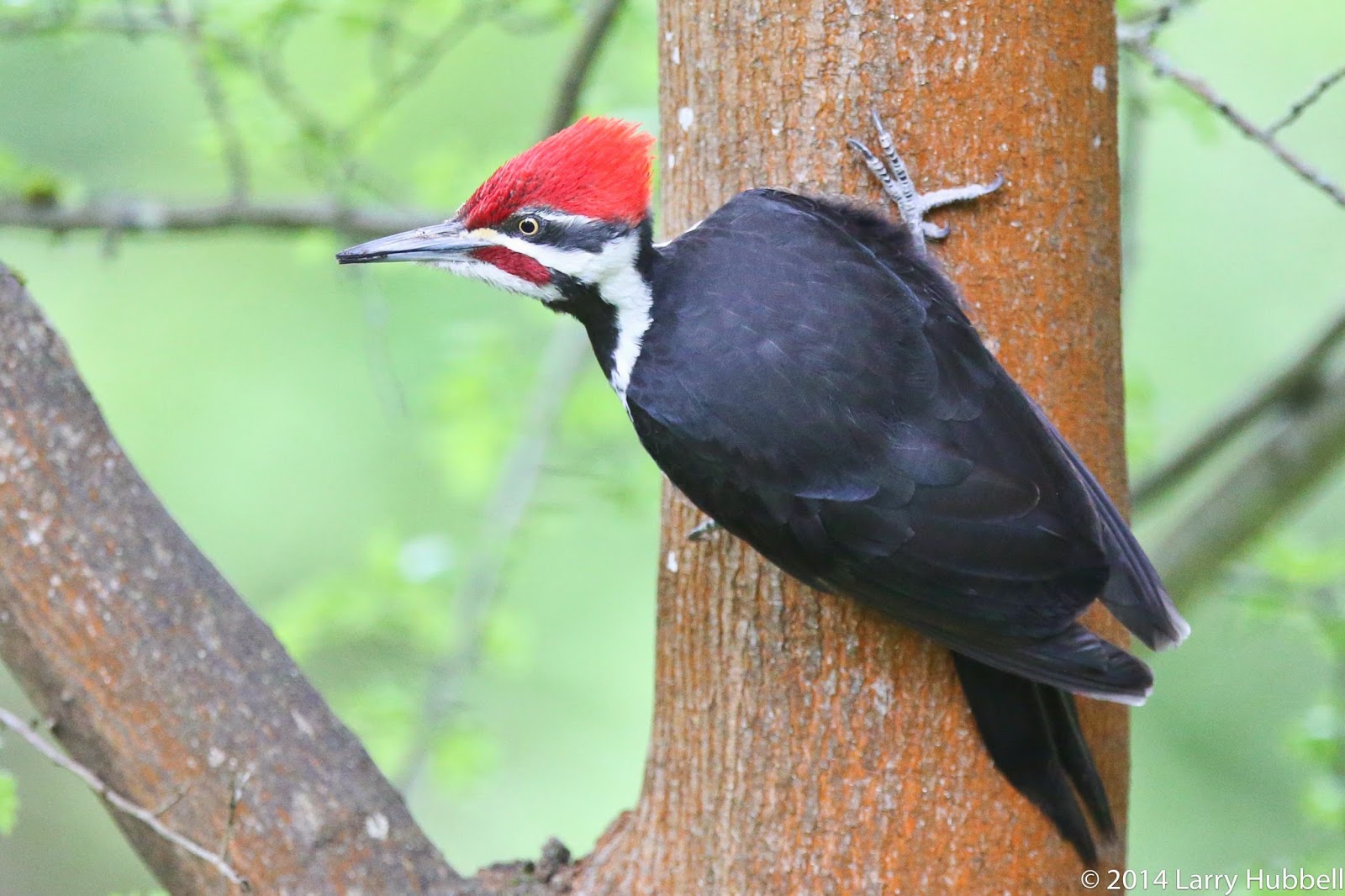 Also on Monday, the male Pileated Woodpecker, most likely Elvis, was seen feeding nearby. 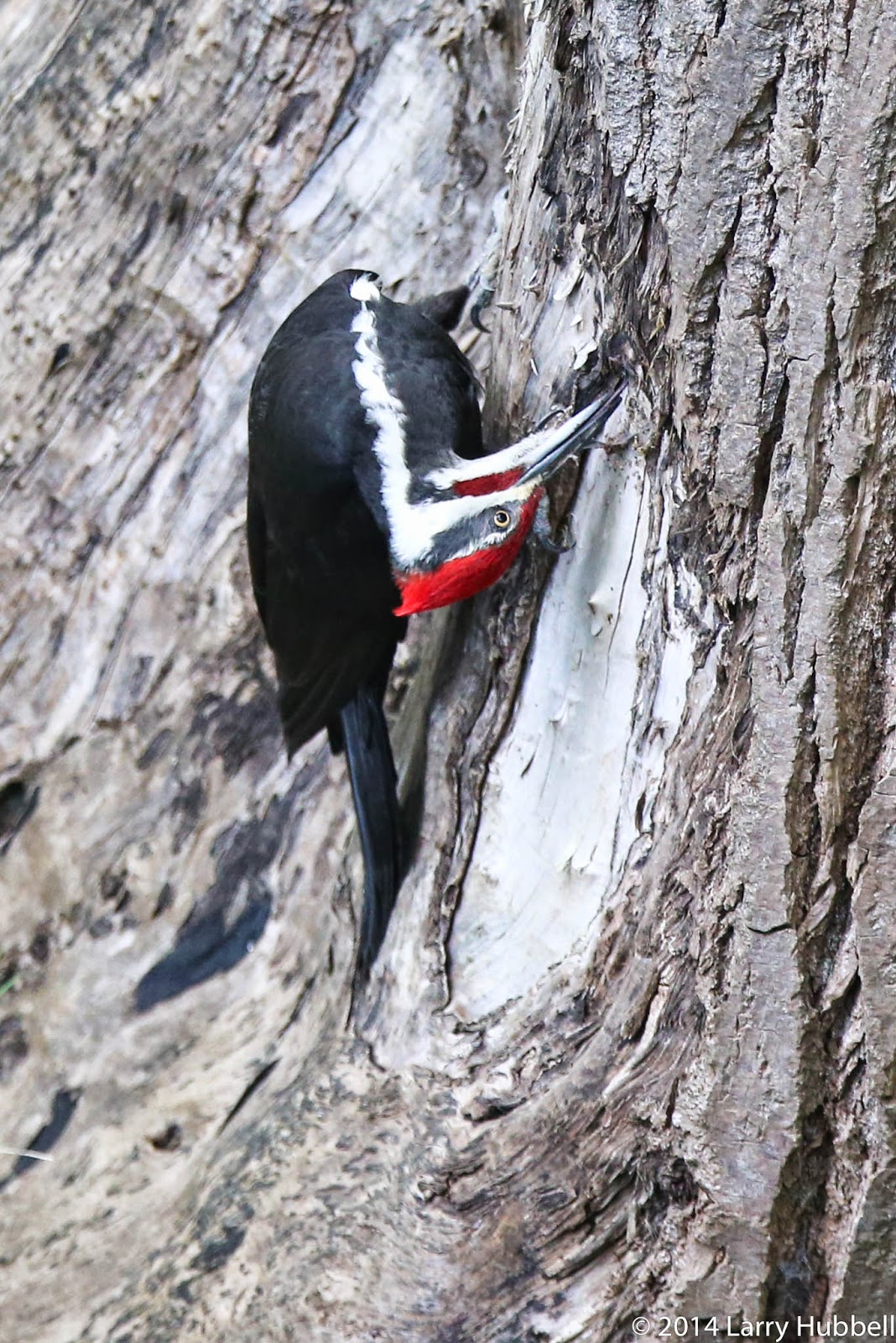 No crevice is safe from his explorations. The Pileated Woodpeckers are said to trade off on the nesting duties but curiously only the male has been seen for the last month or so. Maybe he has the night shift at the nest? 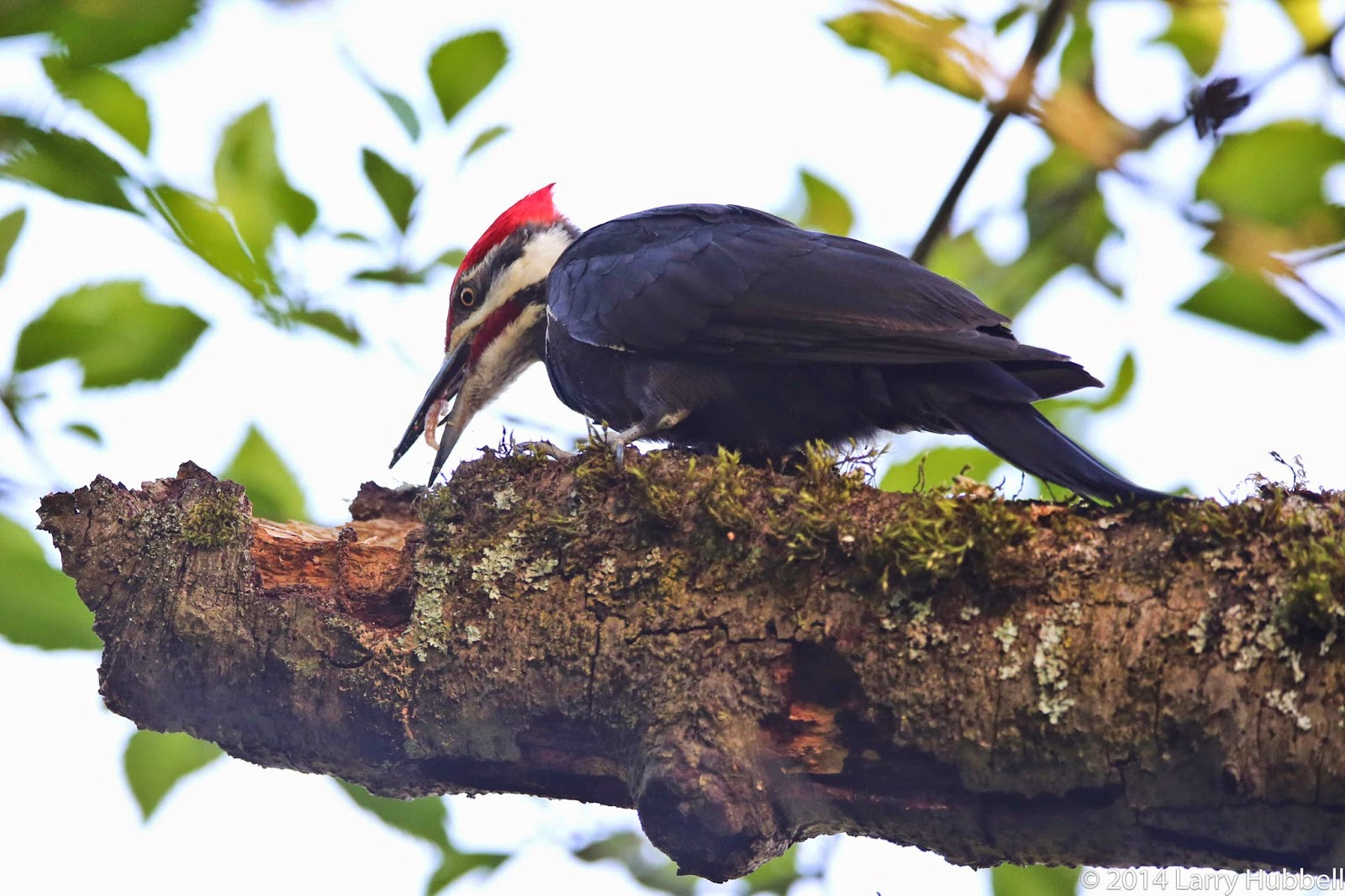 On Wednesday he came and fed in the Downy Woodpecker's nesting tree. This may well be my first photo of food actually being picked up by a Pileated Woodpecker. Usually their beaks are in the hole they have created and their food moves unseen from deep in the hole to inside their beaks. 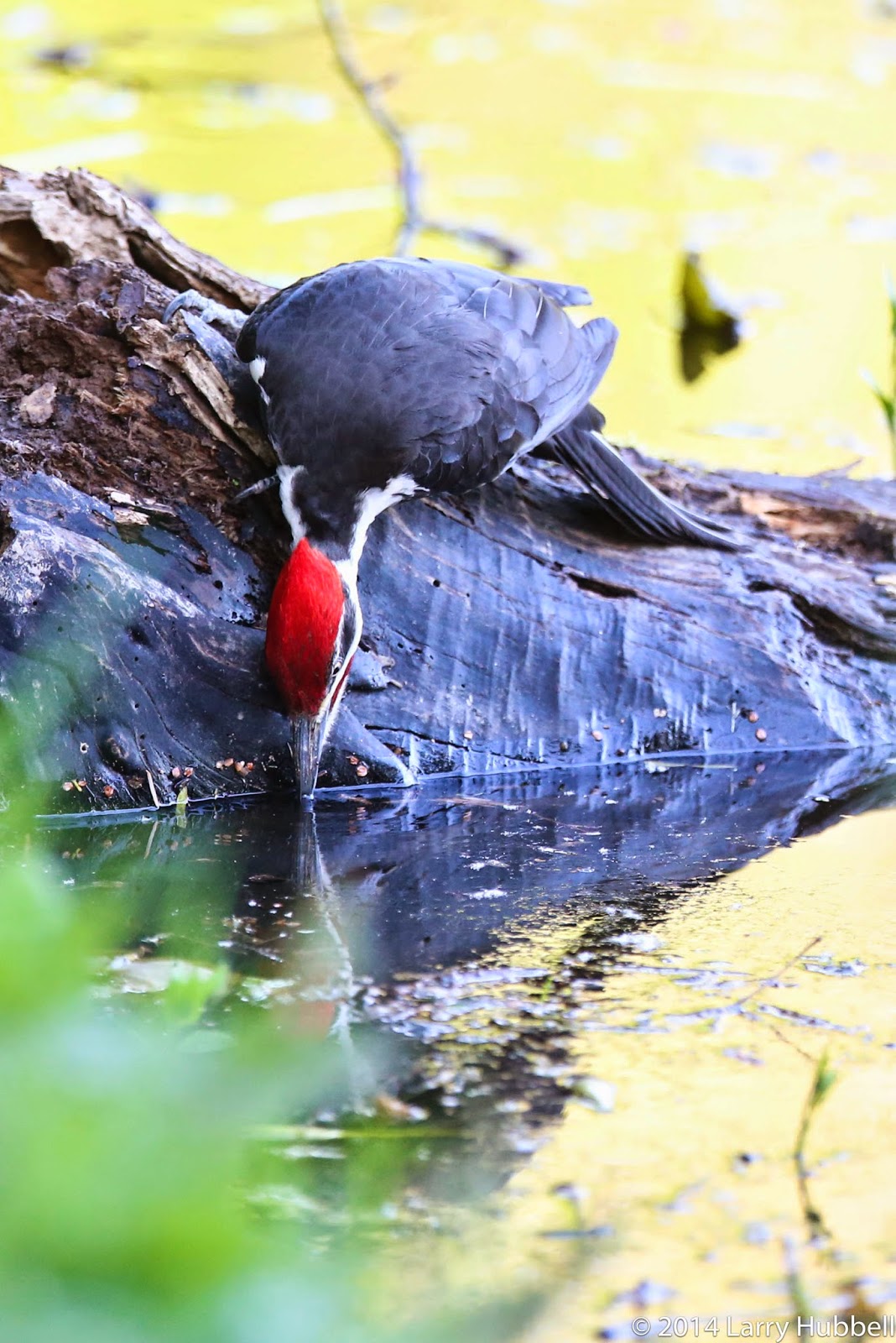 Another first was seeing Elvis drink from Duck Bay. 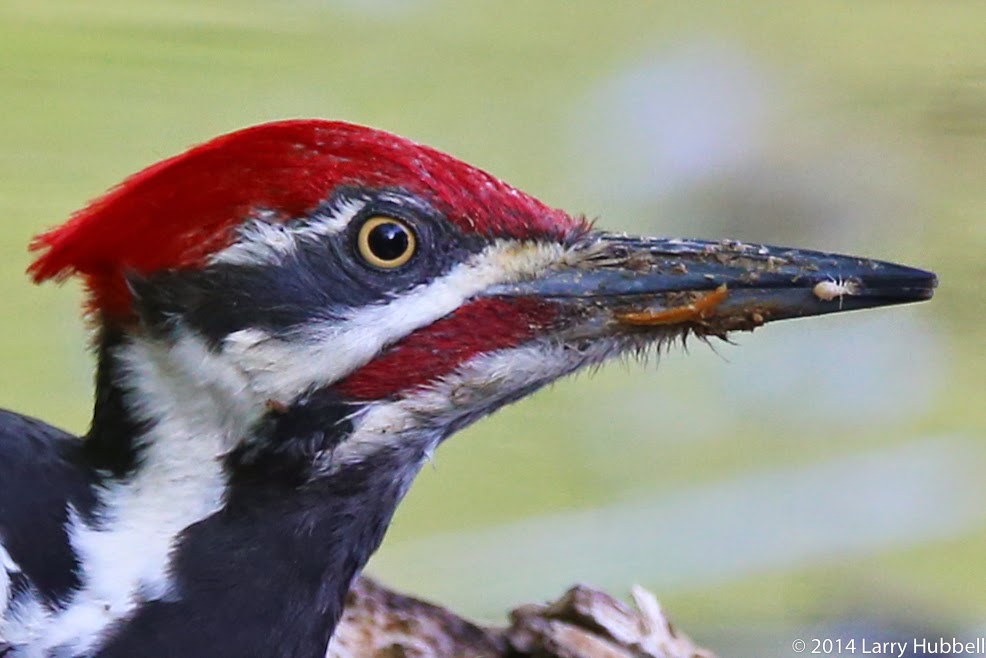 He then spent a half hour excavating food from the same log, and in the process this small white bug was photographed in a very dangerous position. 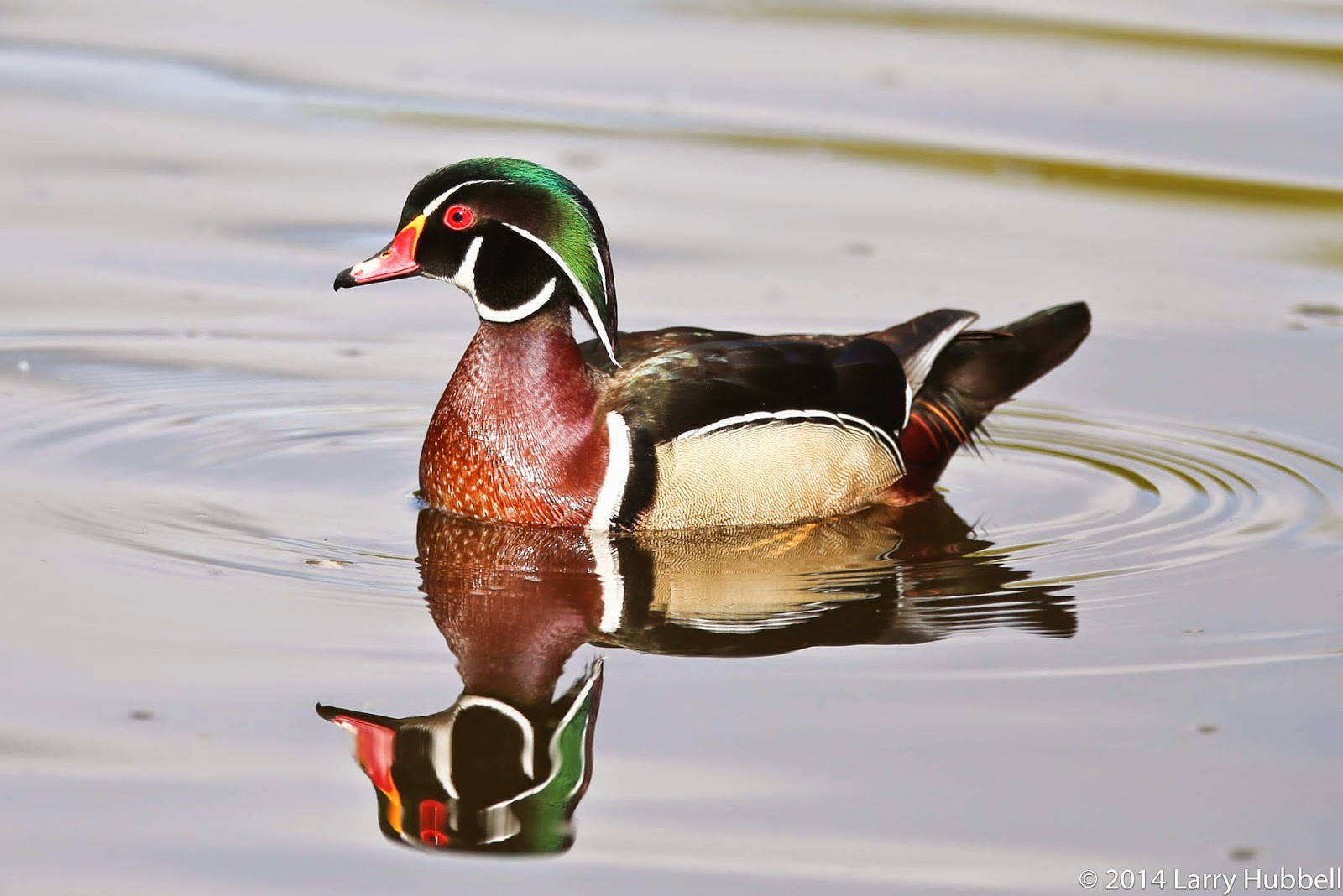 Nearby male Wood Ducks suddenly seem to outnumber the females four to one, which may indicate that some of the females are out of sight while sitting on eggs or tending to young ducklings. Labors of love do seem to fall disproportionately upon the mothers.

Posted by Larry Hubbell at 3:20 PM