Last Spring a pair of Downy Woodpeckers nested near the water at the north end of the Arboretum. (You can read their story here.) Over the winter the top 75% of their nesting tree fell to the ground. Given the short little stub left behind one had to wonder if they would return to nest in what was left of the tree. 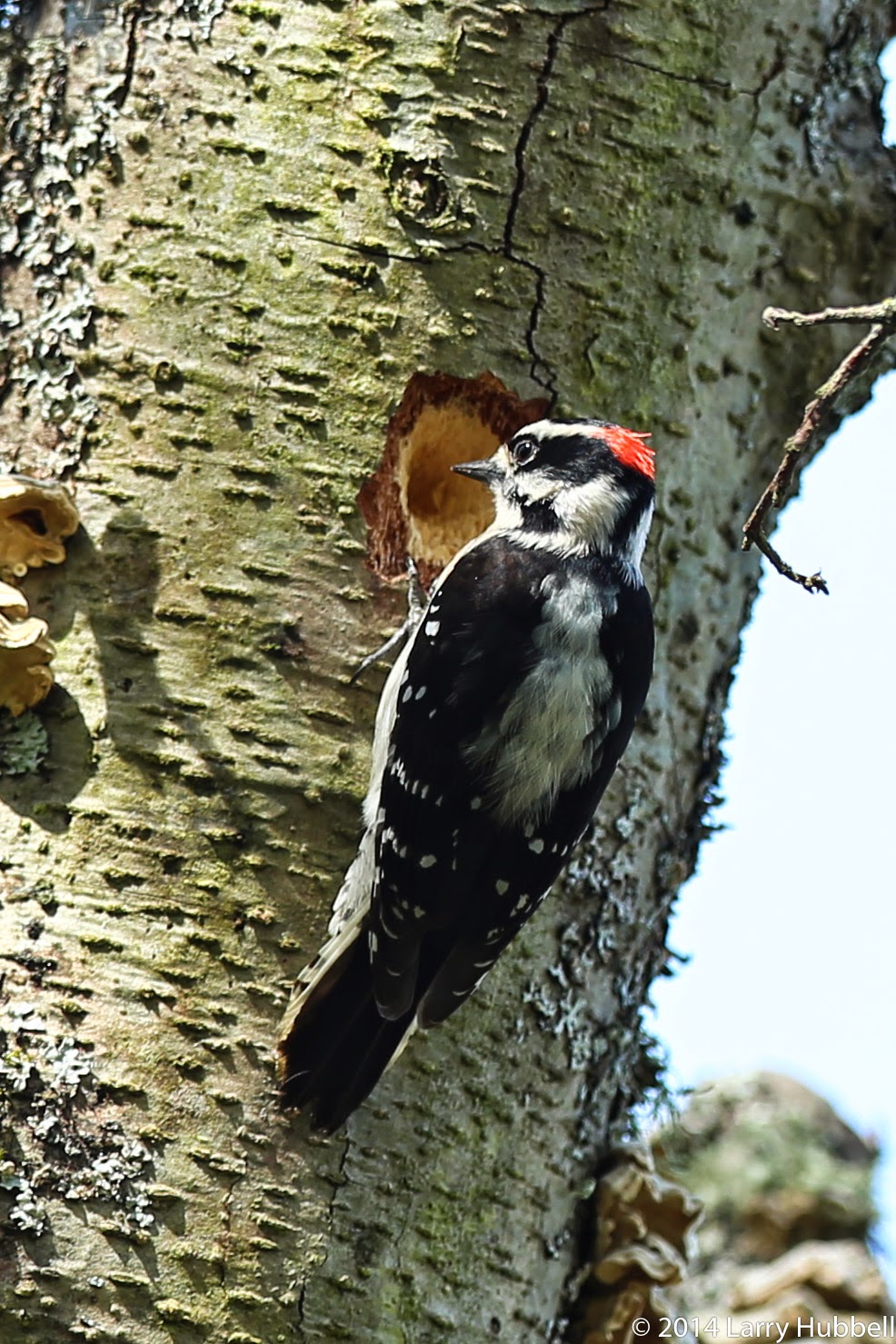 The good news is that on Monday morning this male Downy was discovered, in a tree a couple of hundred feet away, starting a new nesting hole. 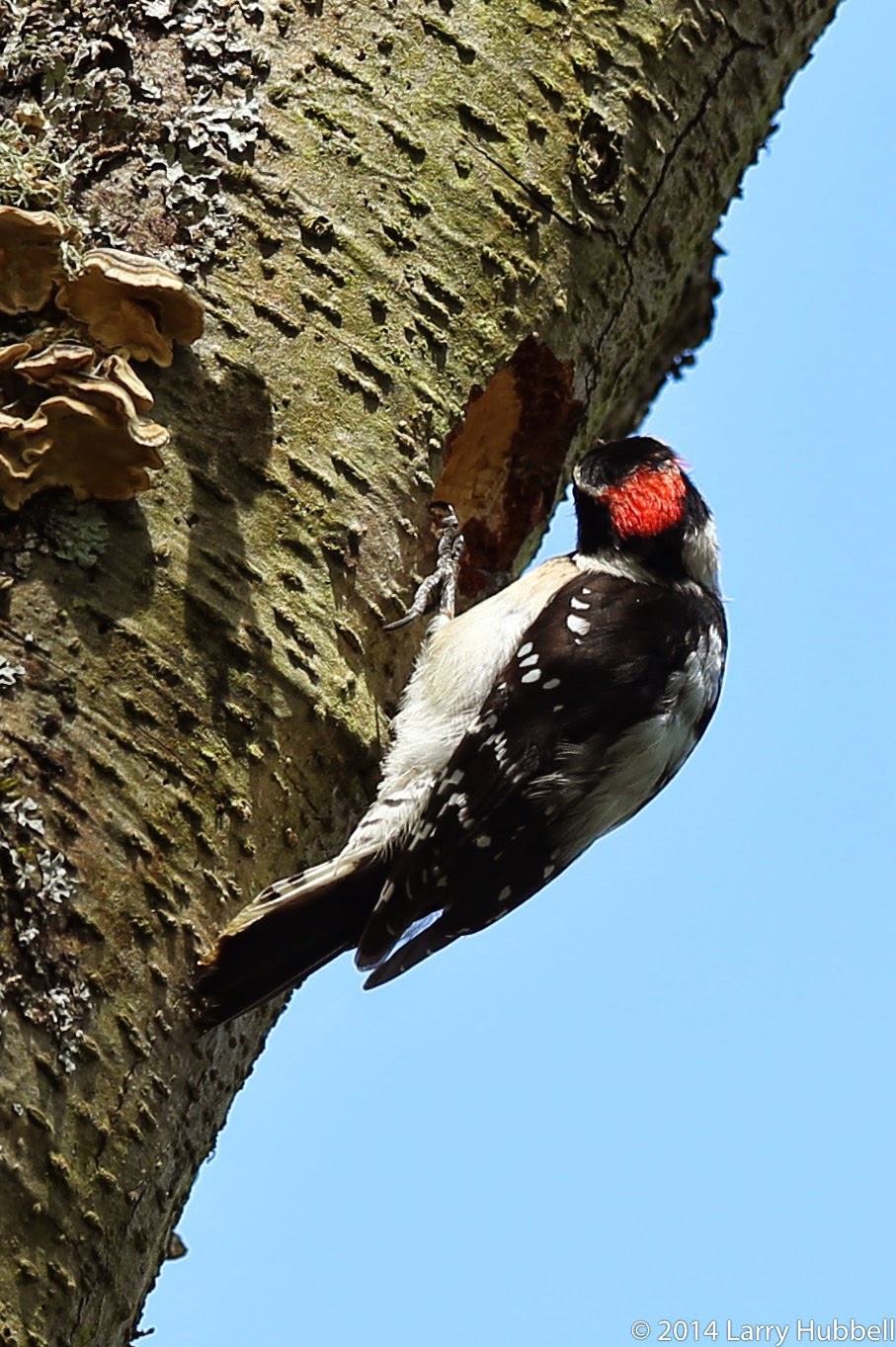 Most of the time he would work at deepening the hole but occasionally he would stop and clean away some obstruction around the edge. Cornell says the Downy's consistently chose the underside of a leaning tree to make their entrance hole. I suppose it gives them cover from rain and maybe from predatory birds as well. 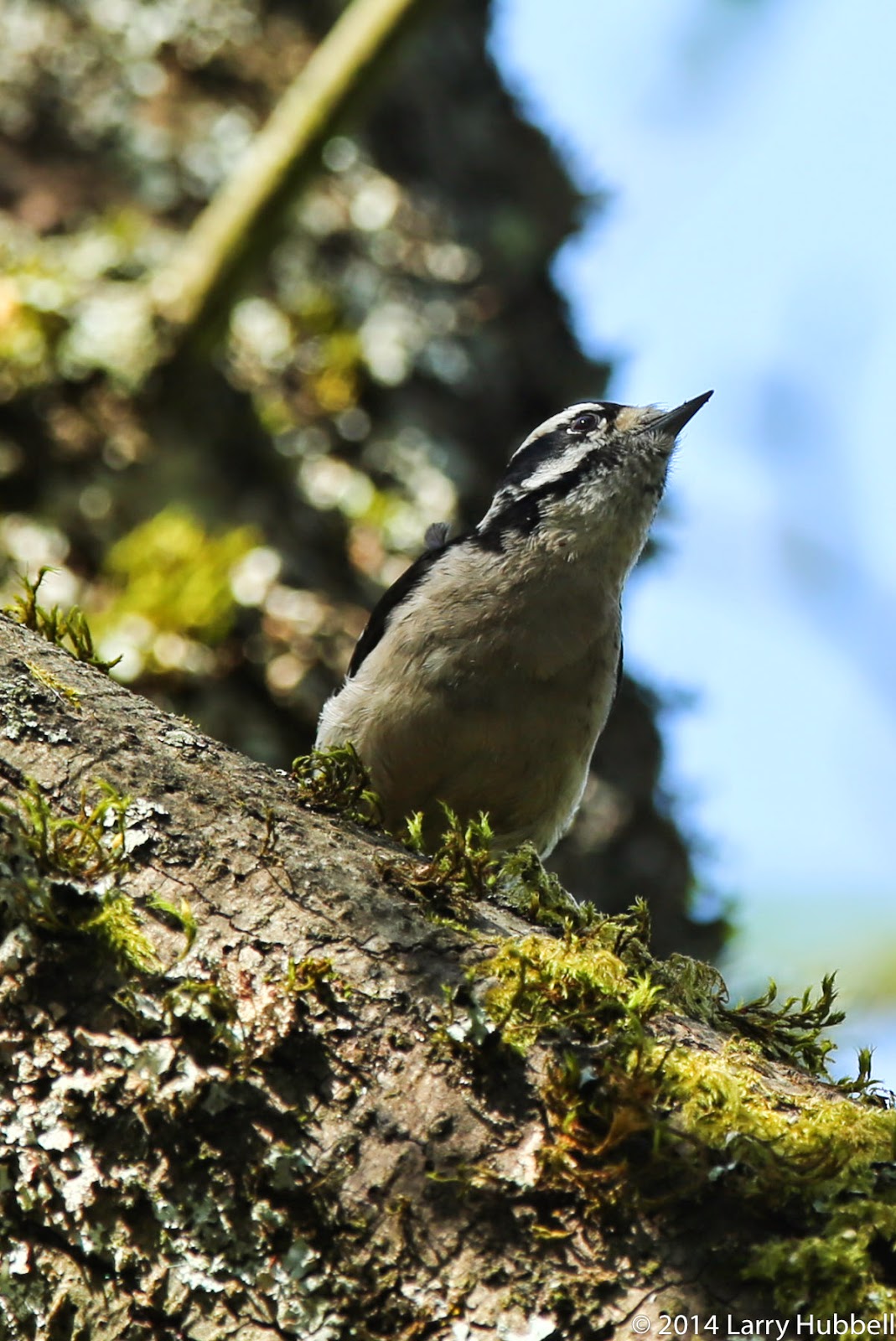 After a while a female Downy showed up at the new nesting tree. She watched from a distance at first, before working her way up the branch where the male was working. 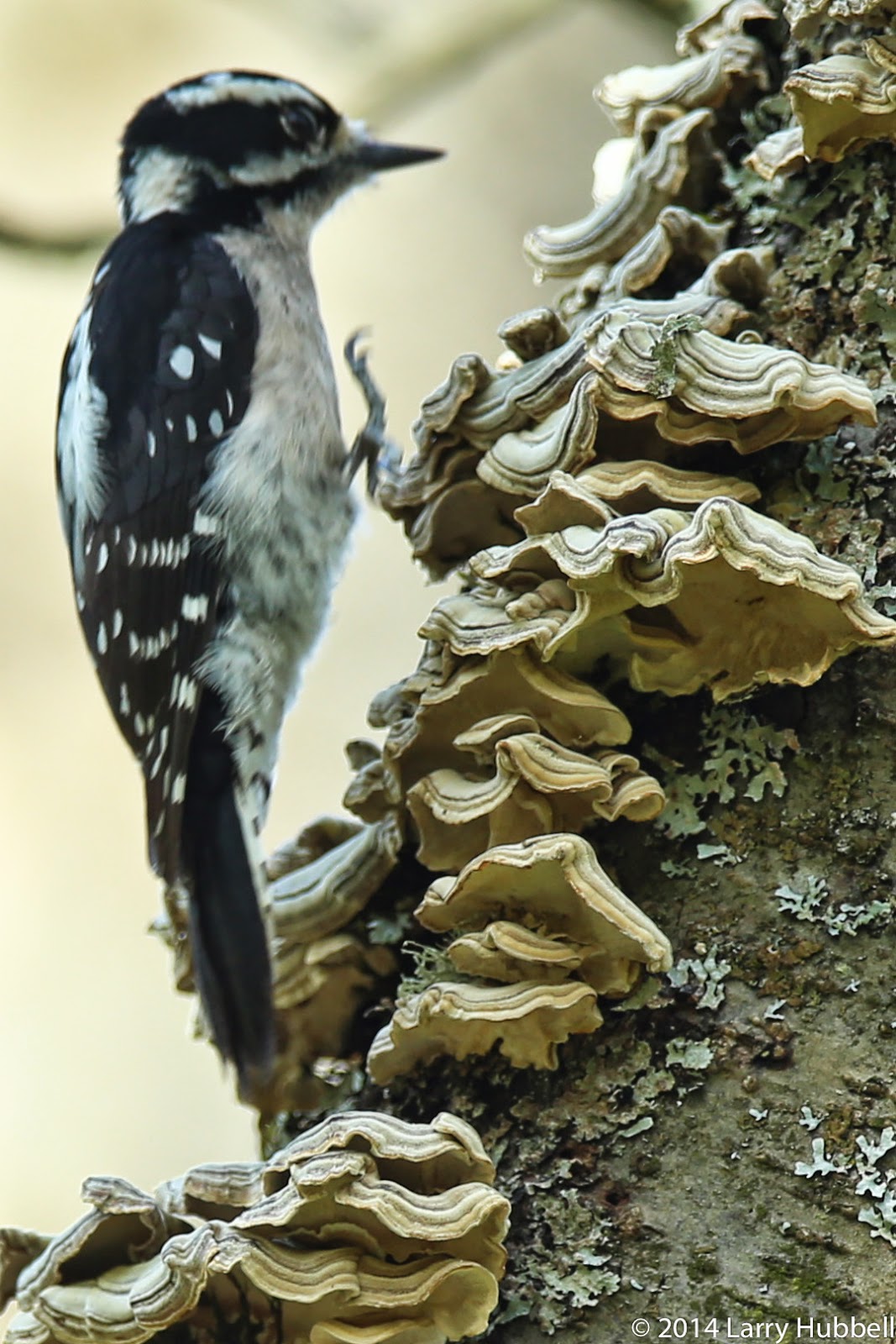 The Downy's seem to prefer trees where some type of fungus has softened up the wood, which certainly must make their annual excavations easier. 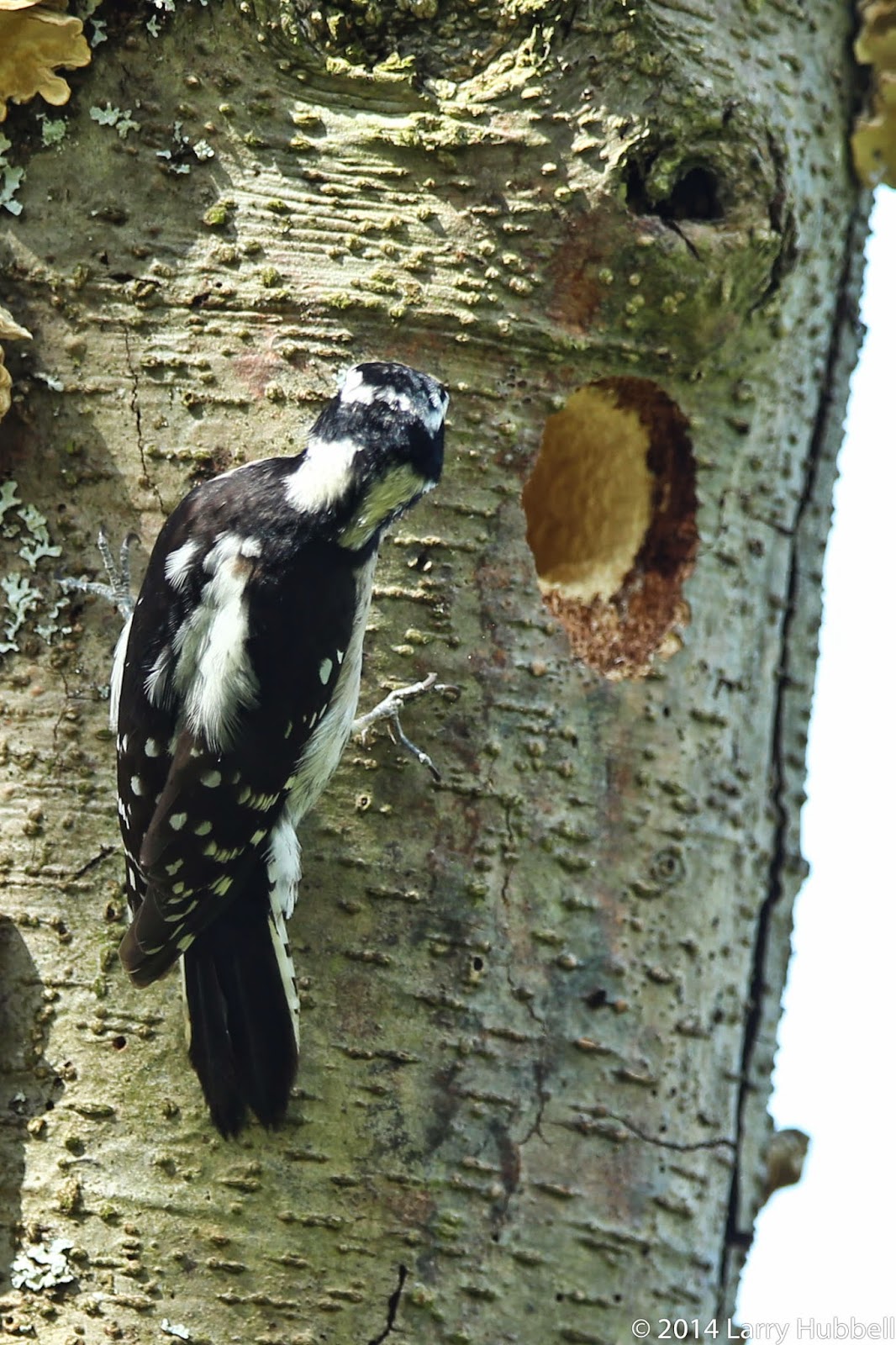 Her surprise was that she stopped at a fresh hole about 3 feet below where the male was working. Above last years nest it looked like there was an escape hole about a foot further up the tree. However a 3 foot distance seems a bit extreme so it makes me think they are having a disagreement about the optimal nest location. (By the way have you noticed how to tell the difference between the male and female Downy? It should be obvious in the photos above.) 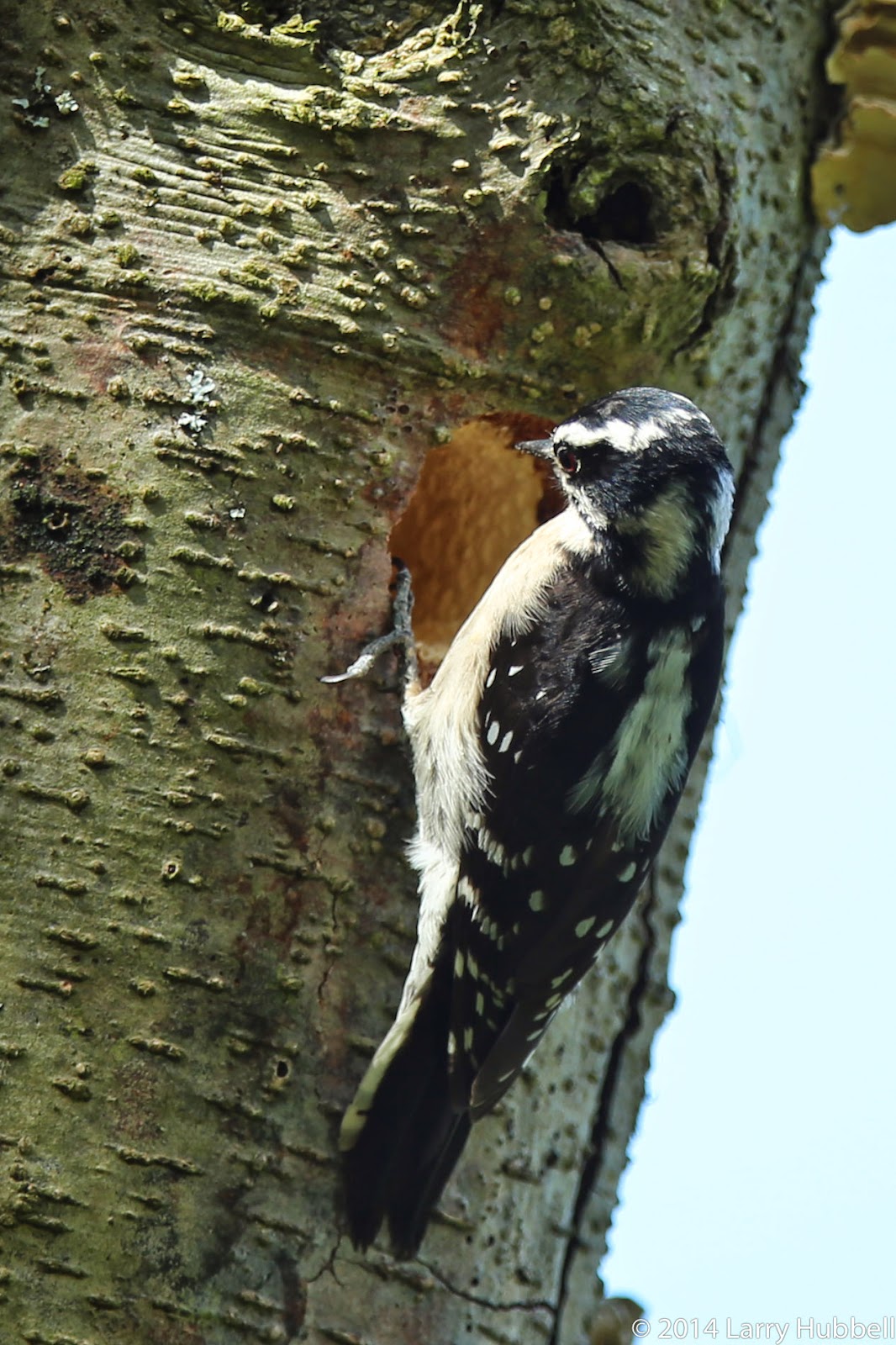 In any case while she worked at her hole the male took a break and went looking for food. After a bit she moved up and inspected his new excavation before moving on.

On Monday afternoon a Black-Capped Chickadee was seen going in and out of the male's new hole. It was as is the bird was happily thinking, "How nice a brand new nesting hole." I am not sure when the Downy put an end to the fantasy, but I am sure it was short-lived. 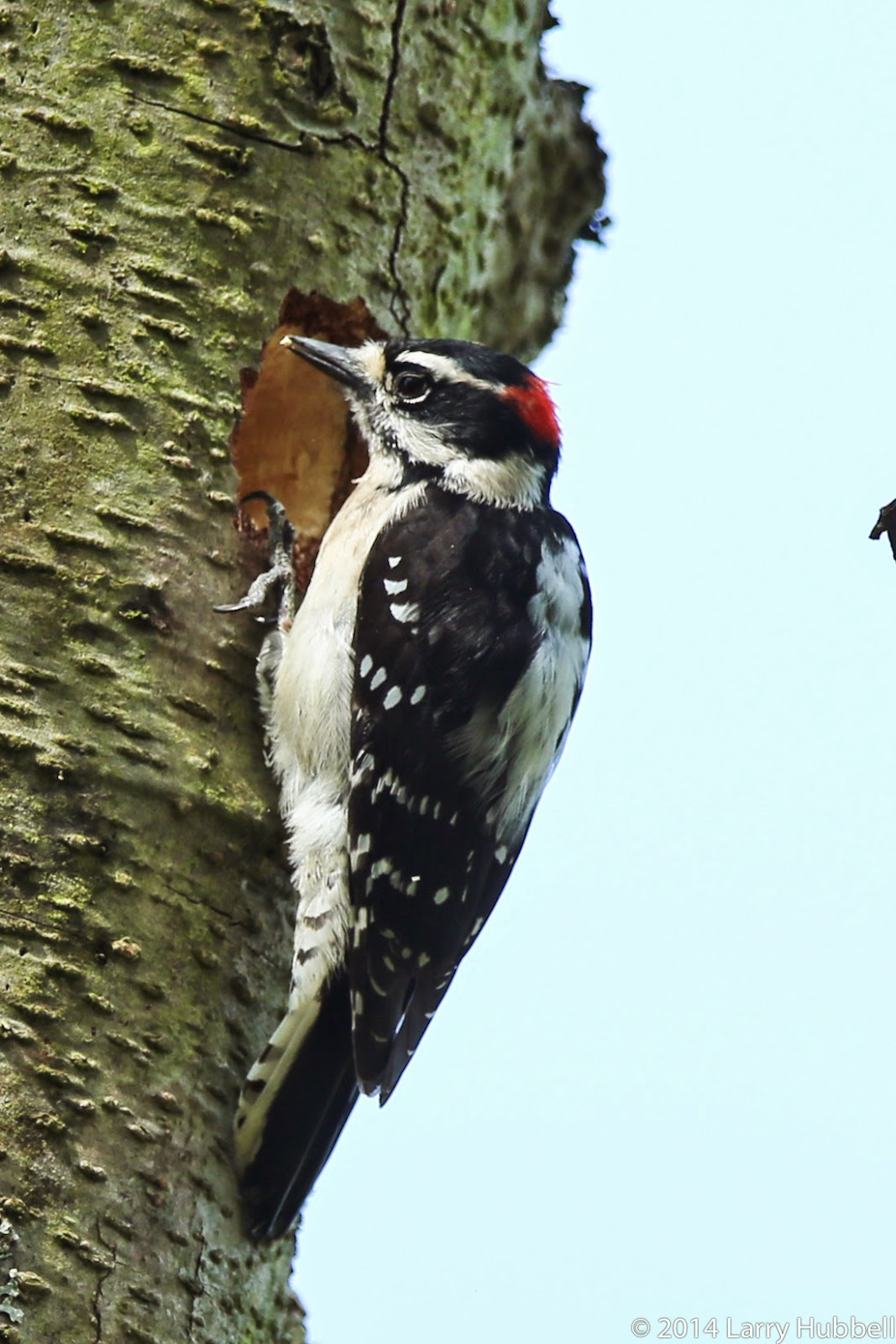 On Friday morning the male was once again working on the same hole. Often removing one tiny chunk of wood at a time. Cornell says that both birds working together can take from 1 to 3 weeks to complete a nest. That makes sense given the careful and meticulous manner in which they work. 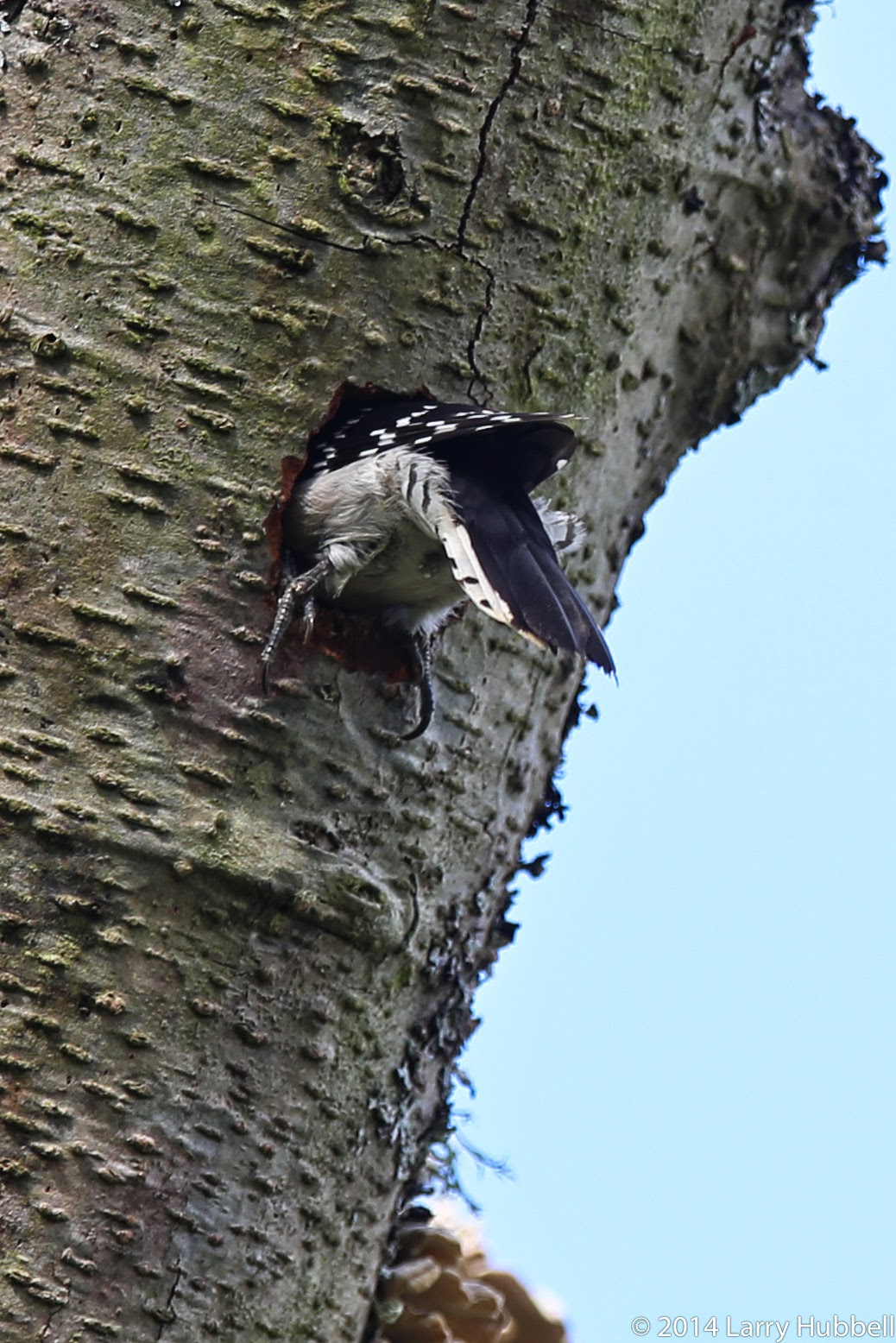 On the other hand clear progress is being made. If you look at the very first photo you can see that there was hardly room for his head in the hole. While in the photo above, four days later, he is working with more than half of his body in the hole. 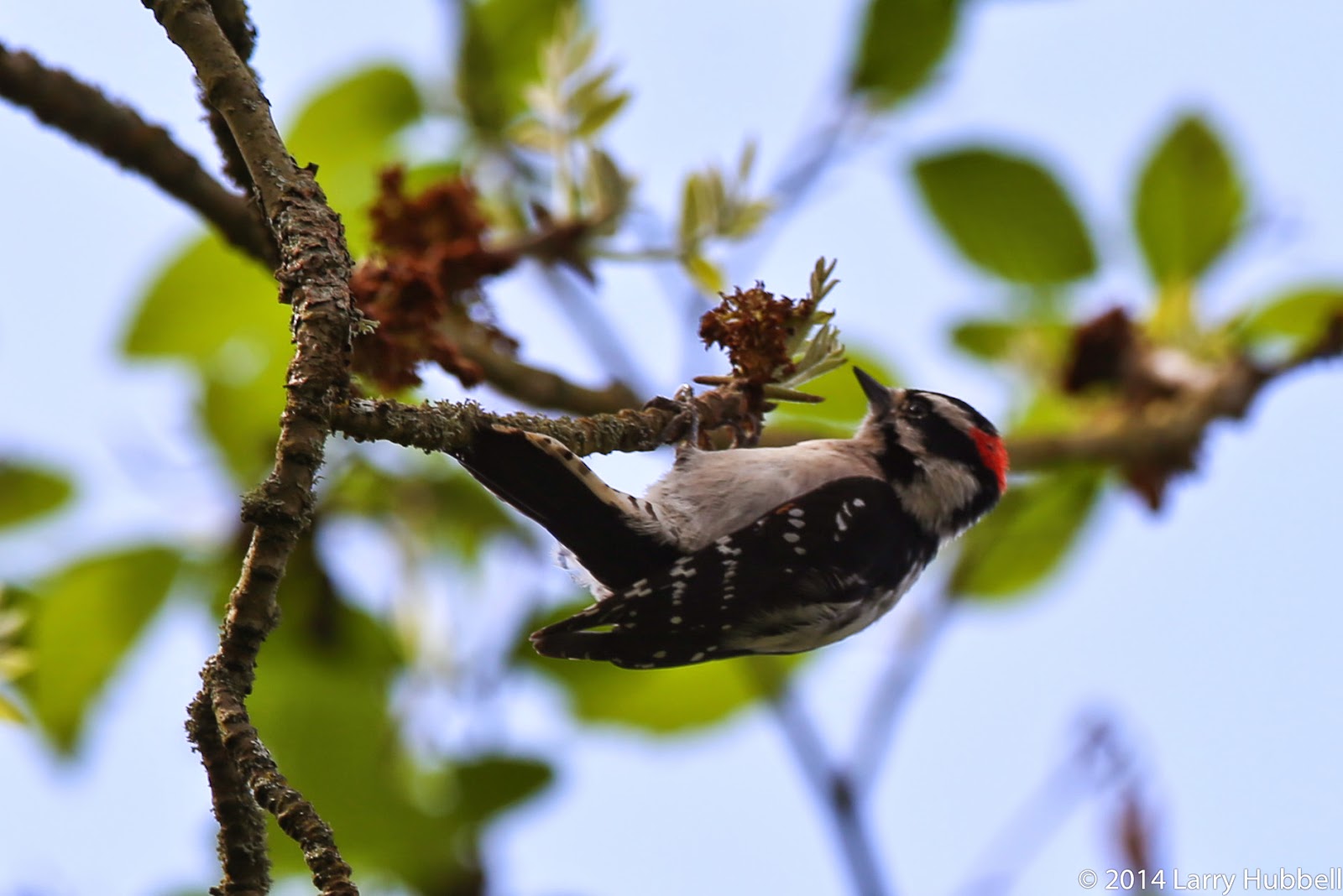 All of this work can make a person hungry. So our lead excavator visited a nearby tree to inspect the new buds for edible delights. 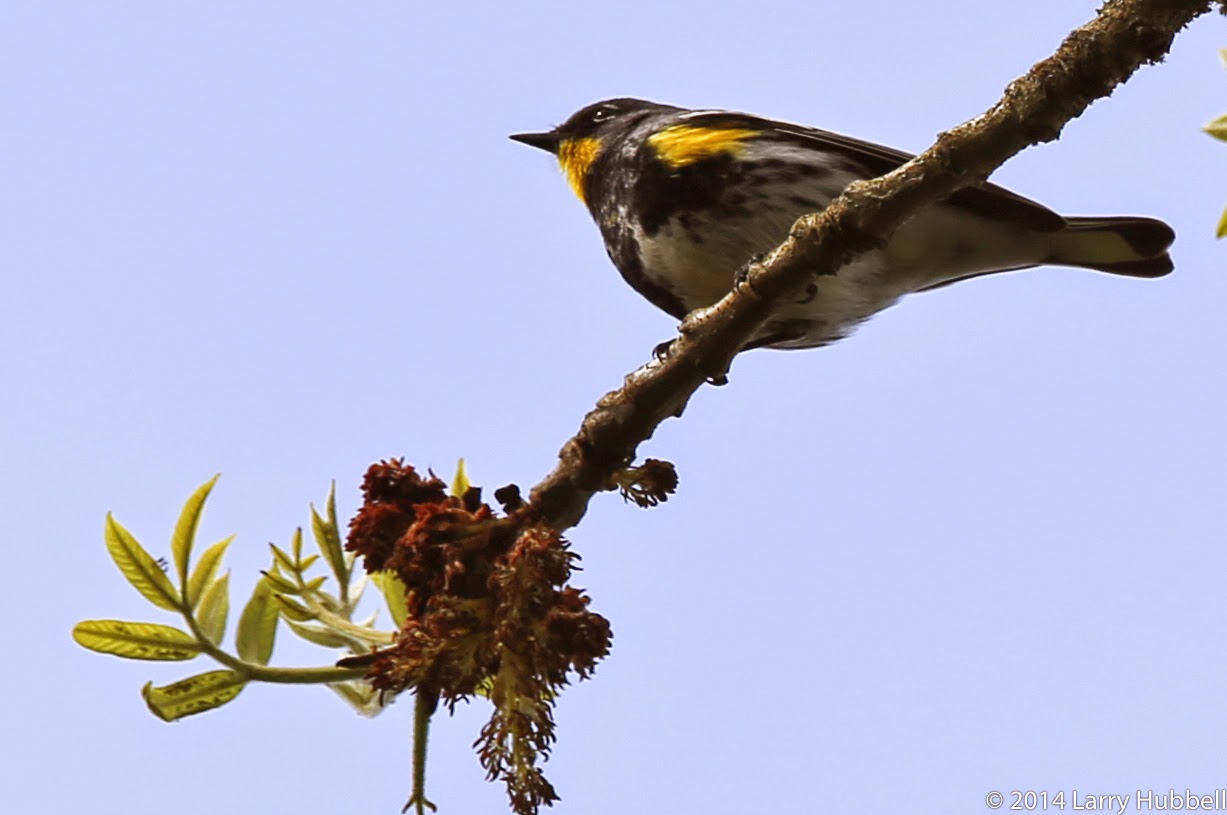 At one point his feeding was interrupted by this like-minded warbler. 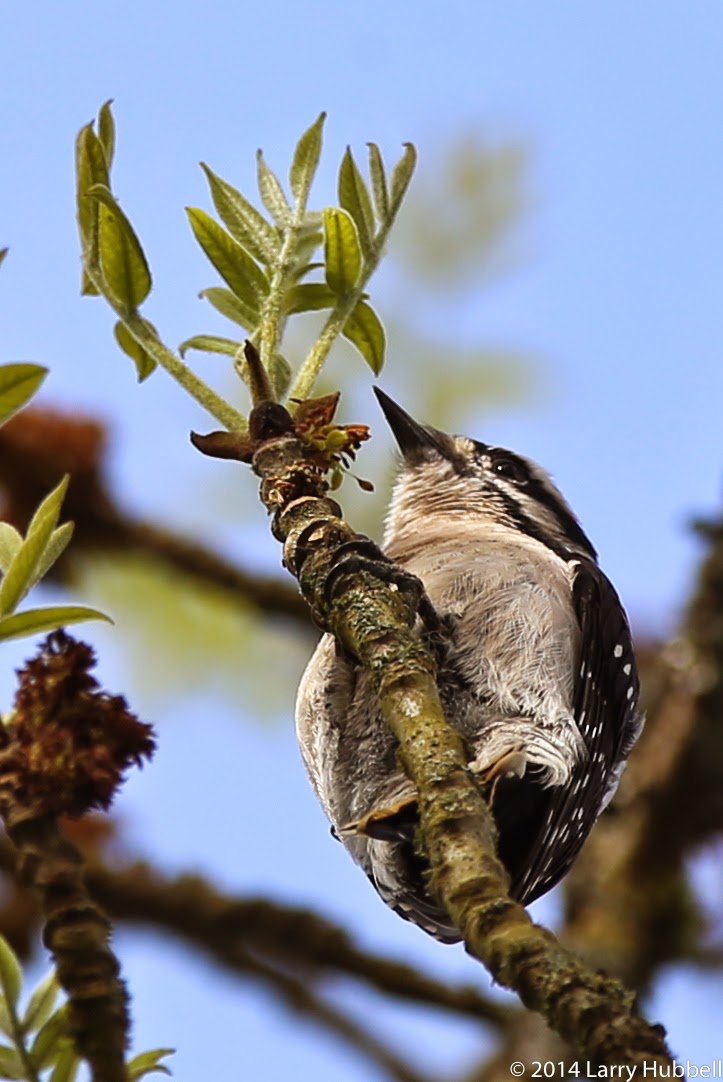 After determining the danger was minimal he returned to his feeding. 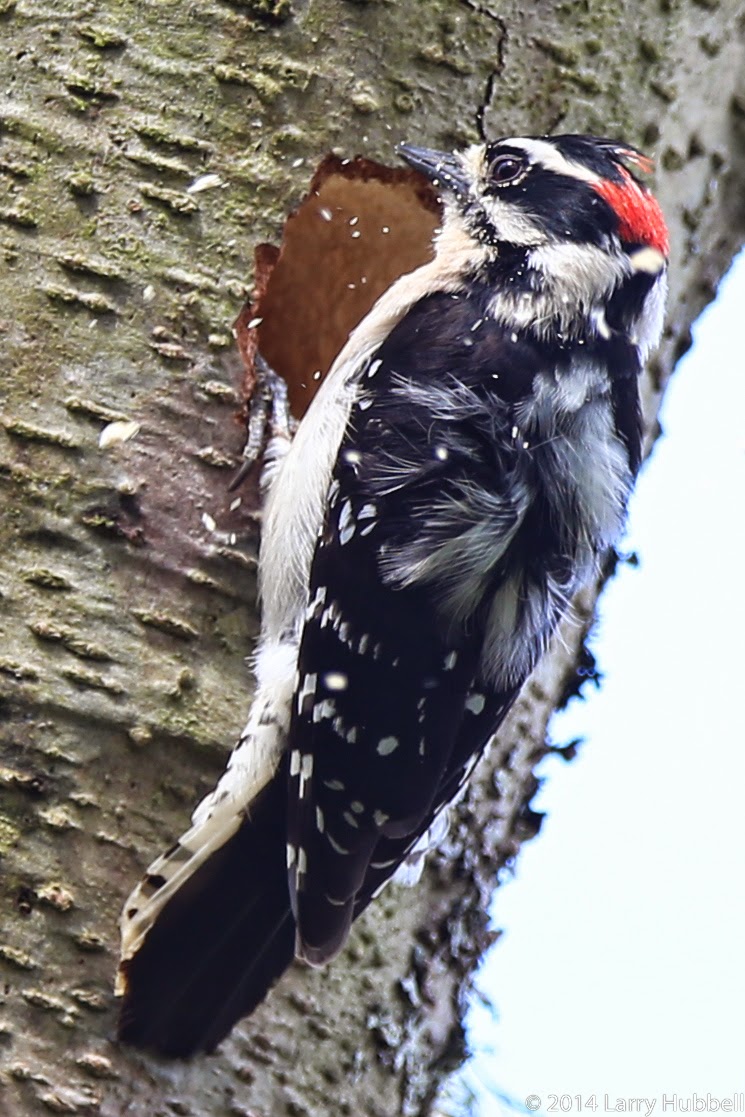 In the end he went back to clearing out his choice for a nesting site. It seems when he is working deeper in the hole that he removes a number small wood fragments and then tosses them all out at one time with a single flick of his head. It will be interesting to see if the female continues to work on the lower hole or whether she trades off with the male on excavating the hole he prefers.

By the way here is a bit of a birding challenge to test your powers of observation. 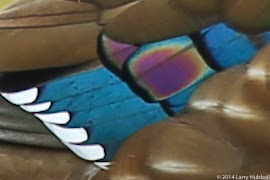 What type of bird do these feathers belong too? While you consider the challenge here are a couple more fun photos. 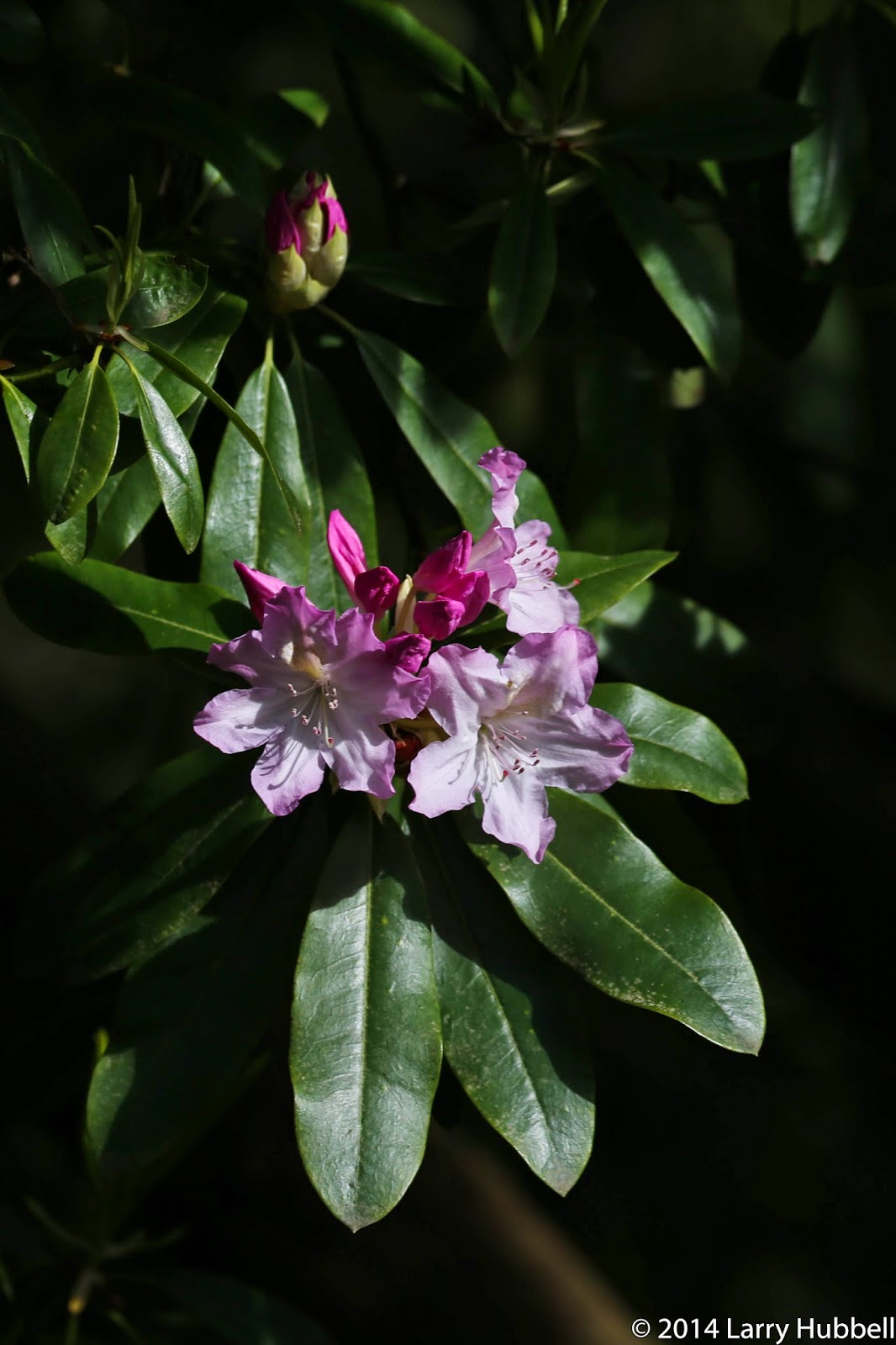 A pink Rhody in blossom and… 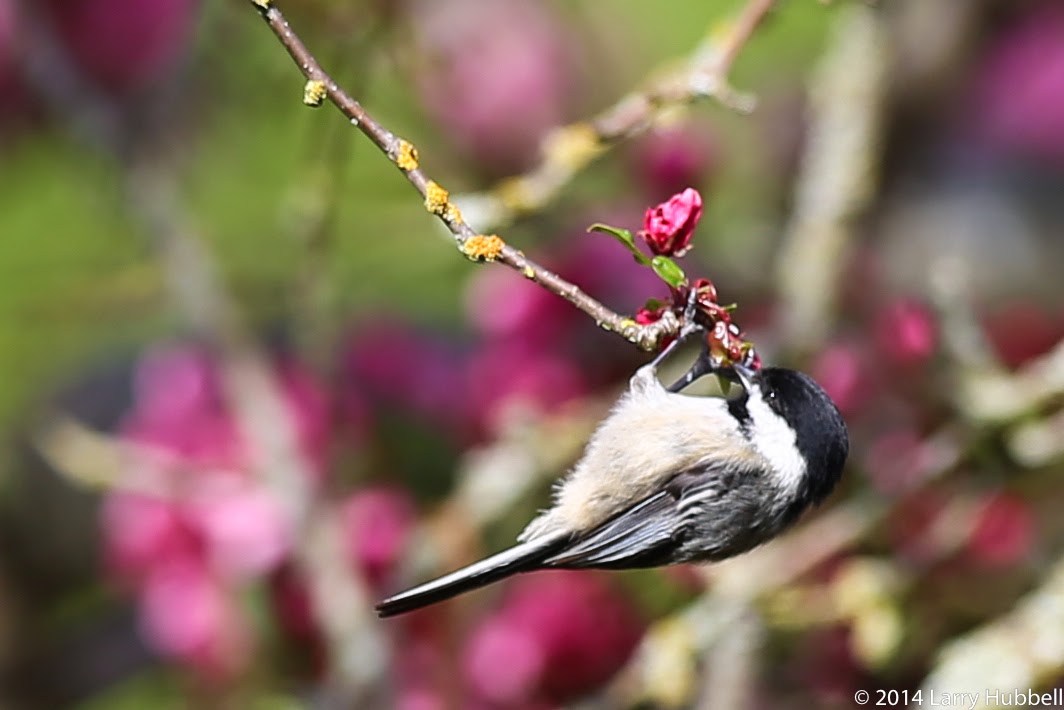 …a Black-Capped Chickadee feeding on what I think is a flowering Crabapple tree.

Here is the answer to the feather challenge. 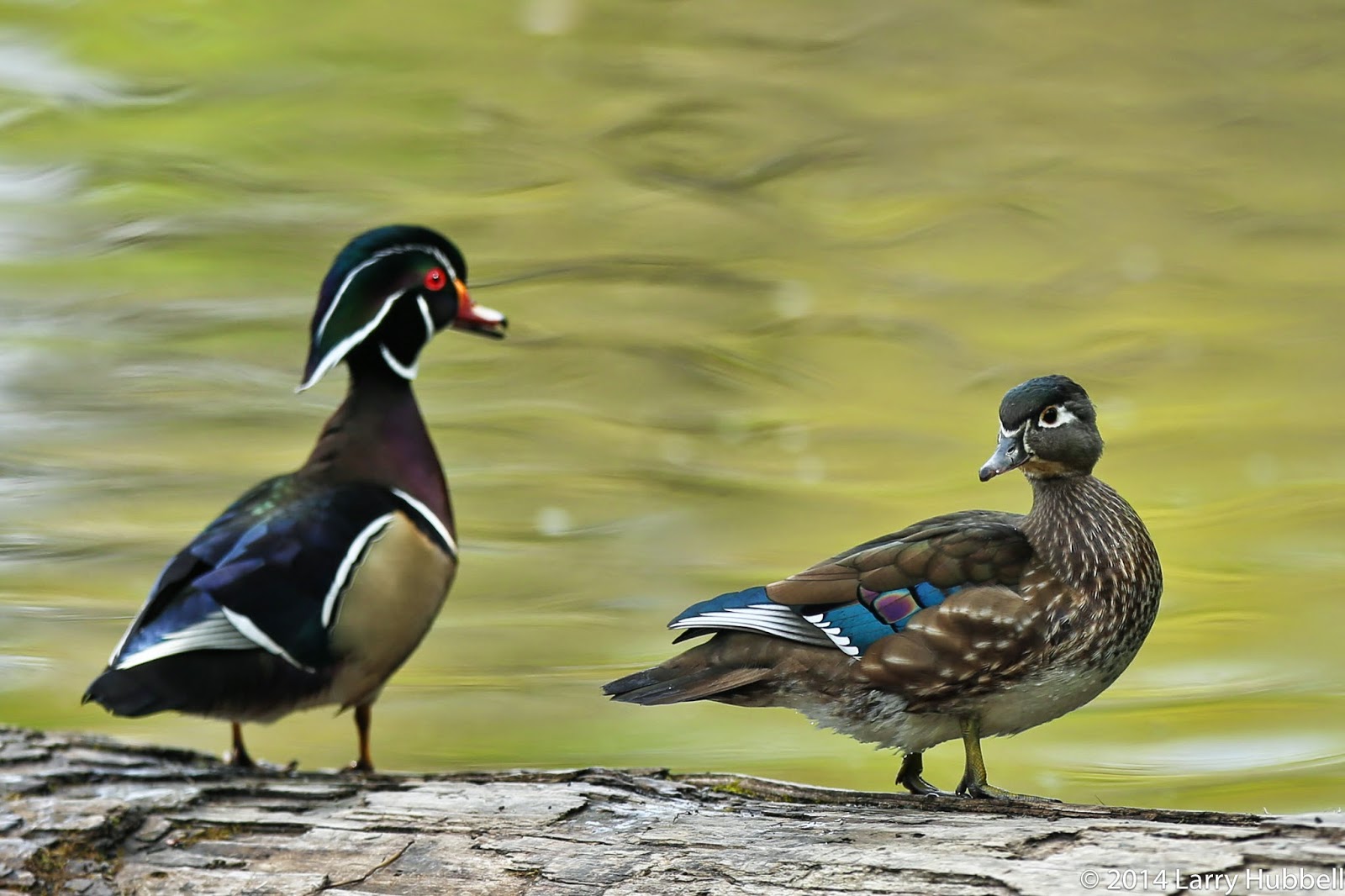 The feathers are from the wing of a female Wood Duck. The colors on these birds are particularly brilliant right now. It is a bit hard to see but the top of her head even had a green sheen. Here is one more interesting Wood Duck feather challenge. 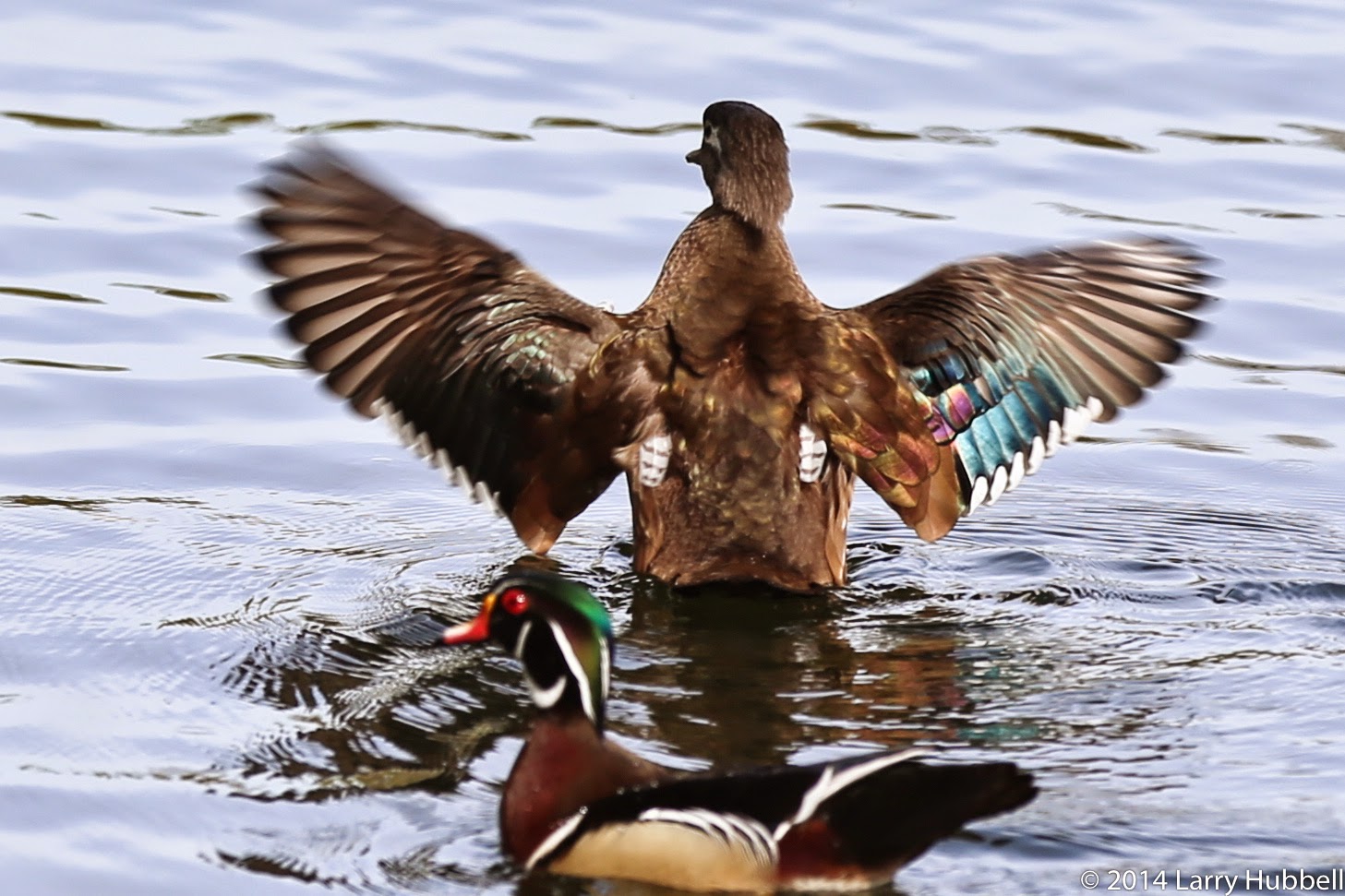 Have you ever noticed the white and black feathers on her body that are normally covered by her wings? 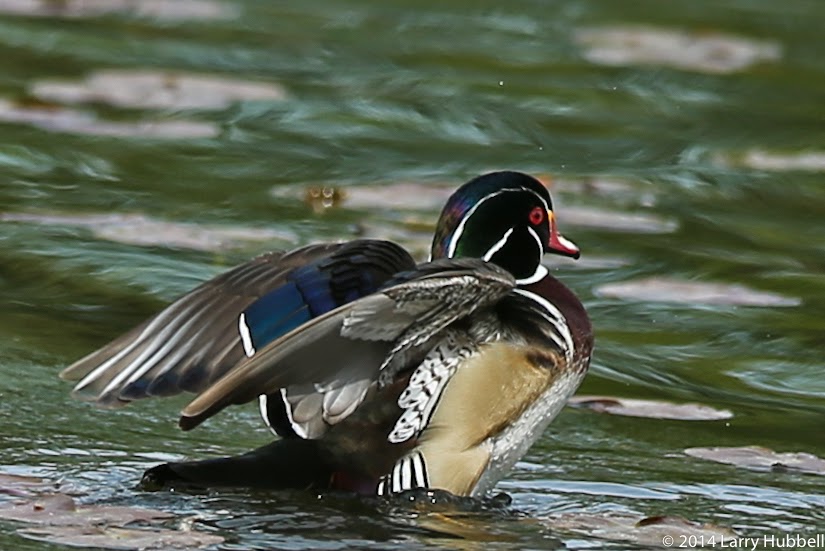 It is odd but I had never noticed them before either and yet this week I just happened to get a photo of the same feathers on both the male and the female Wood Duck. Does anyone know the purpose of these feathers or what they are called? It is a mystery to me.

I have not seen the female Barred Owl at Interlaken all week. My best guess is that she has given up on her mate and the concept of nesting and is off looking for a new mate.

Concerning the rat poison that killed her mate, someone asked this week, What can we do? The best thing I know of is to get rat poison off the market in the City of Seattle. Here are the links to support this position all in one location. You can see that:
Thank you for your concern!