After the beautiful sunlit days of June and July, August has been rather hot, humid and surprisingly cloudy. Sometimes in warm weather the only way to cool down is to take a bath. This bird is deeply involved in bathing, cleaning and drying out. Looking only at the first two photos can you determine what kind of bird has been photographed. 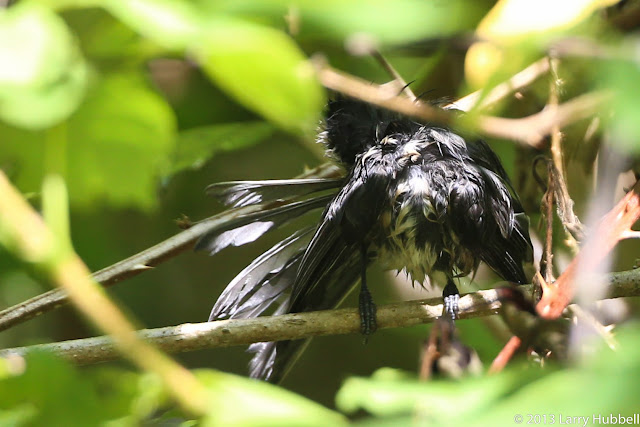 As a matter of fact not only is it a bit hard to determine the type of bird its even hard to figure out where it is hiding its head.

Here is another view. 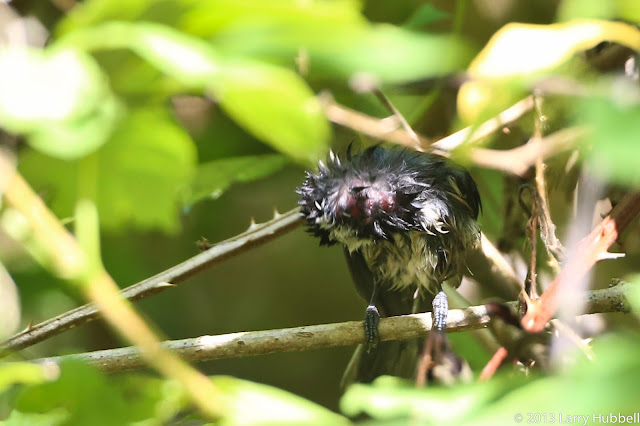 What hints have you found about this bird? Its feet are facing forward so we must be seeing the top of its head. The size of the blackberry vine tells us the bird is fairly small.

What did you guess?

Luckily, the bird flew out of the thicket for a brief stop. 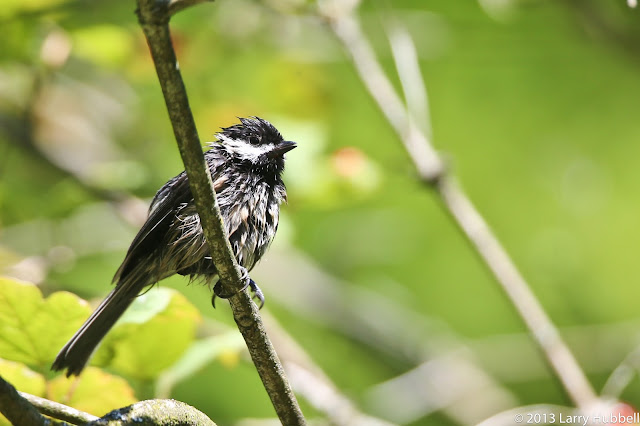 Our little mystery bird turns out to be a Black-Capped Chickadee, having a bit of bad "hair" day.

Birds are not the only creatures around Union Bay that have been enjoying the water in August. In the cool of the evening a beaver came out of its lodge west of Foster Island to look for food. 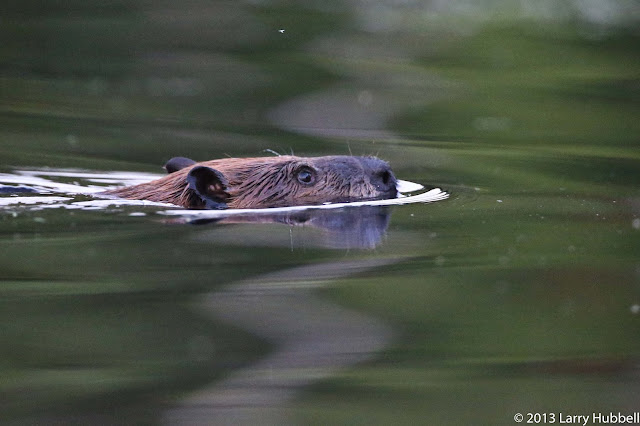 Just to the west on the WSDOT peninsula a muskrat swam out of the water looking somewhat similar to the wet chickadee. 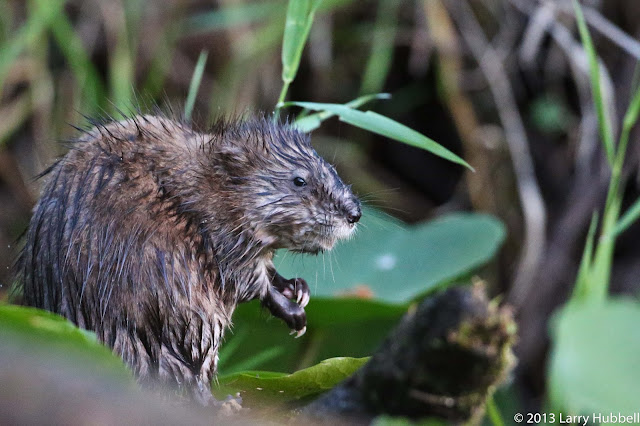 A few days later as the sun began to rise a mother raccoon... 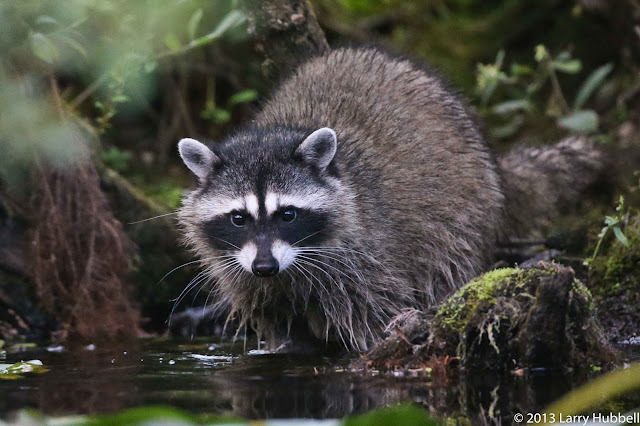 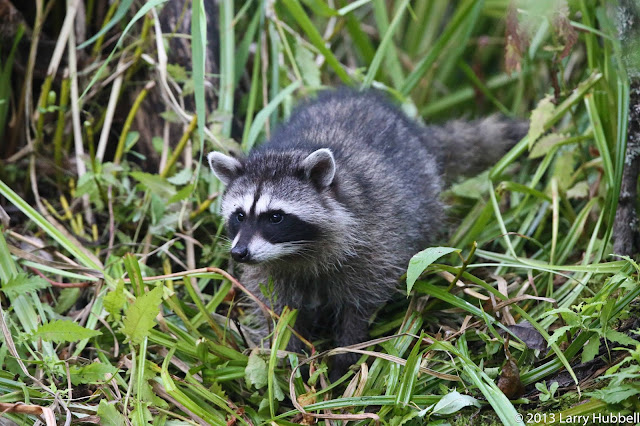 ...worked the water's edge. They moved along the shore practically crawling over the top of one another. They were taking turns searching below each log along the way. 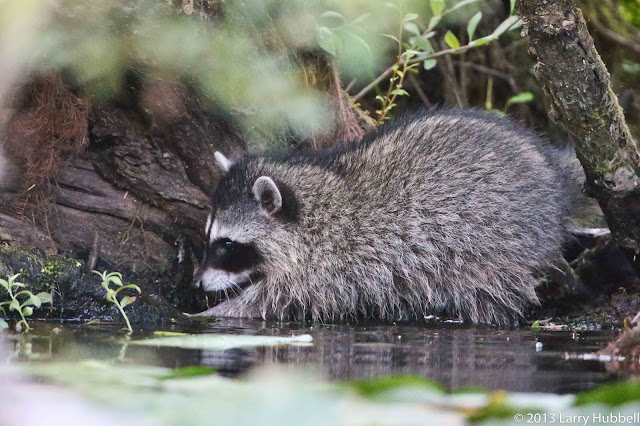 Yesterday morning along the shore of Foster island two raccoons were once again searching along the waters edge. 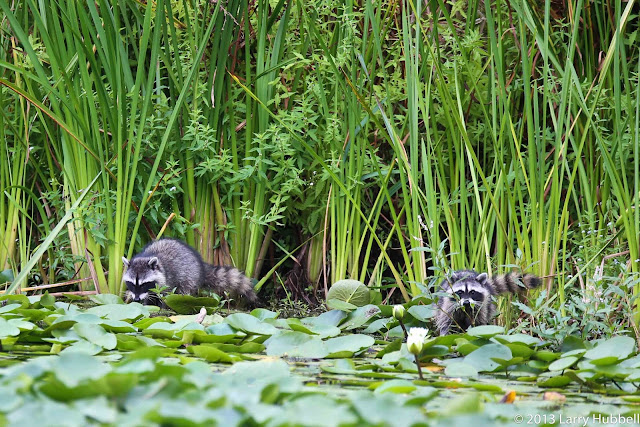 On neither occasion were the raccoons photographed with the food. However snails may be the only food source that would hold still and allow the raccoons to pry it out from under a log or rock. 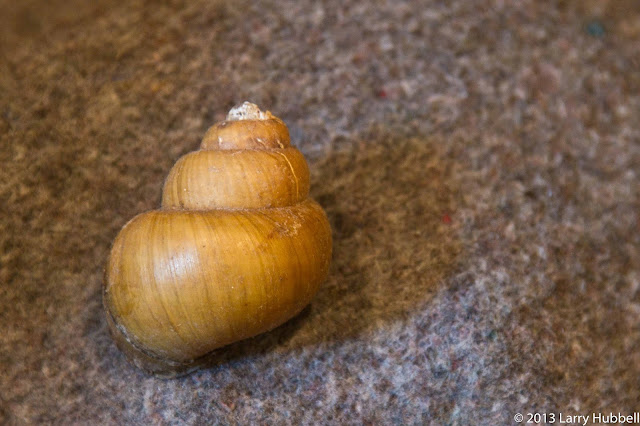 If anyone can supply more information on this subject, like what type of food they have seen raccoons retrieve along the water's edge or the name of this snail, please leave a comment below.

Last week on the same morning the raccoons were first seen a Pied-billed Grebe was spotted with food just east of Foster Island. 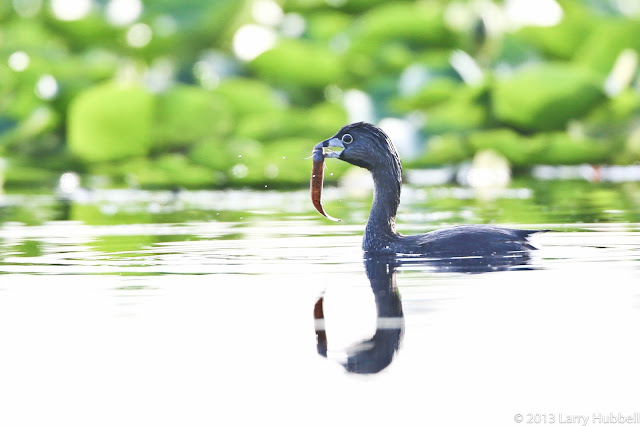 Curiously, the bird was able to hold its prey and call out for its young at the same time.  The grebe dove, swam and popped up in multiple different locations. Each time it came up with its prey hanging from its beak, it was still calling loudly and making no attempt to eat. It finally quit calling after it disappeared to the east. It must have finally located its offspring.

On the way back the sun broke through the clouds and this kingfisher perched in the sun, not far from the mouth of Arboretum Creek. 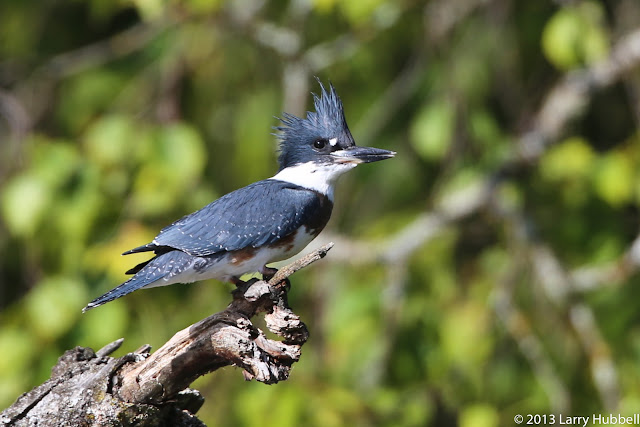 Since males have a single blue stripe across the chest and females have a second brown belly stripe it seemed like gender determination would be easy. See more here. 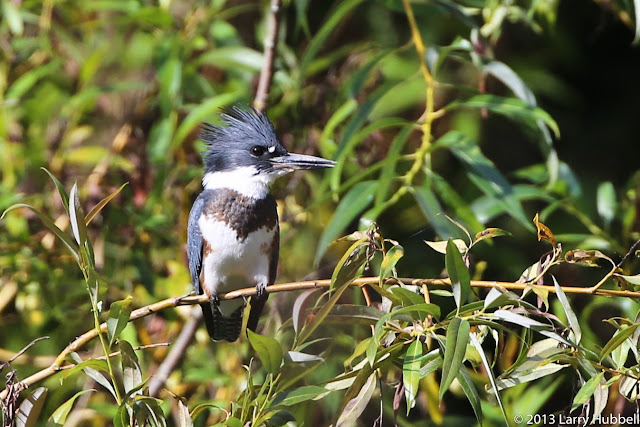 But what gender has a brownish-blue stripe? 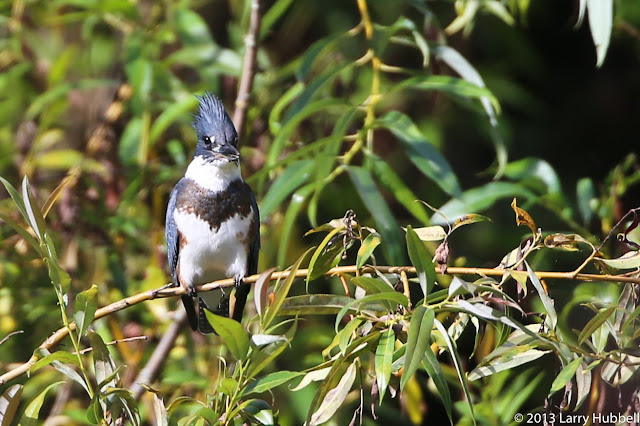 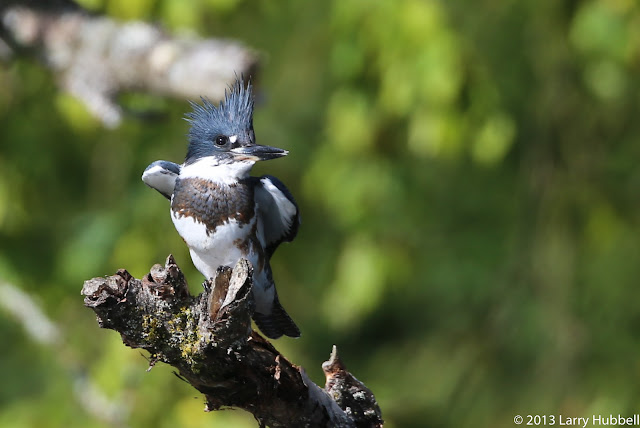 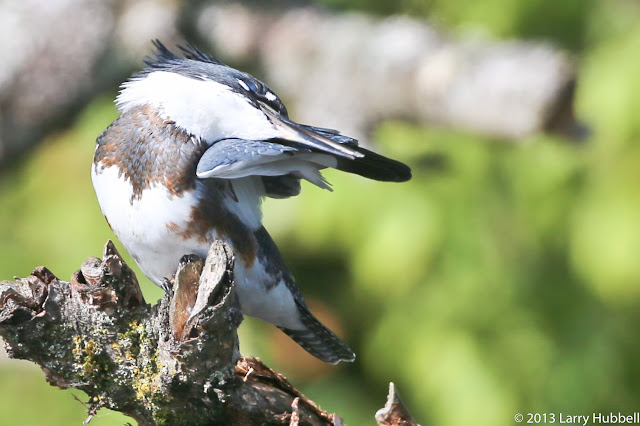 My best guess is that this is a young female who is in the process of growing her mature feathers. If so, the chest stripe will turn blue and the brown under her wings will grow down and around her belly. If anyone has better information to offer please feel free to leave a comment.

By the way this bird was seen a second time this week and also again yesterday. Each time it was in the neighborhood of Elderberry Island, just north of the mouth of Arboretum Creek. It is very shy and will fly (and cry) almost as soon as it hears you or sees you move. If you would like to see it, go early and walk softly in the shadows. Check out branches from 5 to 25 feet, directly above the water. Binoculars will help as the Kingfisher is a fairly small bird. Rather than being called a female Kingfisher don't you think a "Queen Fisher" might be a better name. :-)

The parting shot for this week is simply a feather blowing across the water. 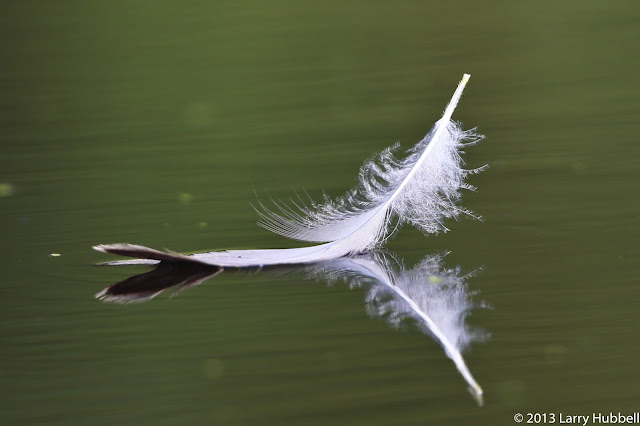 It does make one wonder if a feather like this inspired the invention of the sail.

Posted by Larry Hubbell at 2:01 PM