Faster Than? | The Fastest Bird On Earth

What bird is faster than the fastest bird on earth? 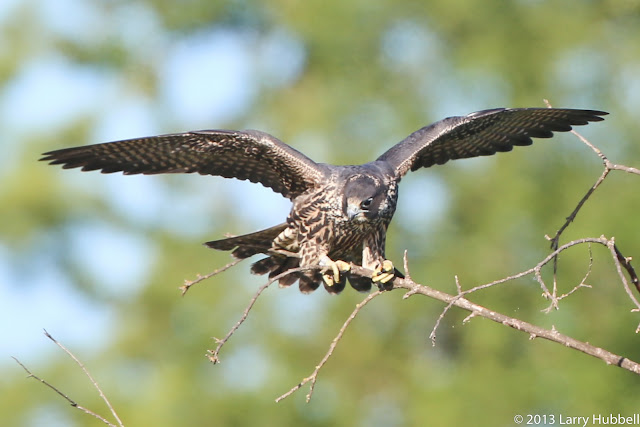 Last week, while photographing Si'ahl, a relatively small dark shape streaked across Union Bay. Water birds fearing for their lives dived below the surface. The hunter came to rest in a small tree on the eastside of Foster Island. Our story begins with this chance encounter with the fastest bird on earth, a peregrine falcon.

Peregrines can dive at over 200 mph (Read and see more about their speed in this prior post.)  and it seems that they are afraid of nothing. Ed Deal, our local peregrine bander and expert, says a pair of peregrines will attack a bald eagle, if it comes too close to their nest. "They will take turns hitting the eagle with their fists and the feathers will fly! In an attempt to defend itself the eagle will even turn on its back in mid-flight to aim its talons towards the falcons."

According to the Cornell Lab of Ornithology the largest peregrines weigh less than 4 pounds and males are generally much smaller. An estimate of the average size of bald eagles is around 13 pounds for the female and around 9 pounds for the male. The size difference between the eagles and the falcons isn't even close. Peregrines could have been the original inspiration for the phrase, "Speed Kills!"

For half an hour early on Friday morning the peregrine rested in a small tree between speedy forays above the water of Union Bay. Once there was a close call with a group of mallards and later an aerial encounter with a gull. The gull and the peregrine did a brief, but beautiful, dance in mid-air before the gull escaped with its life.

Take a close look at the next photo to see if you can spot something that was not evident in the first photo. 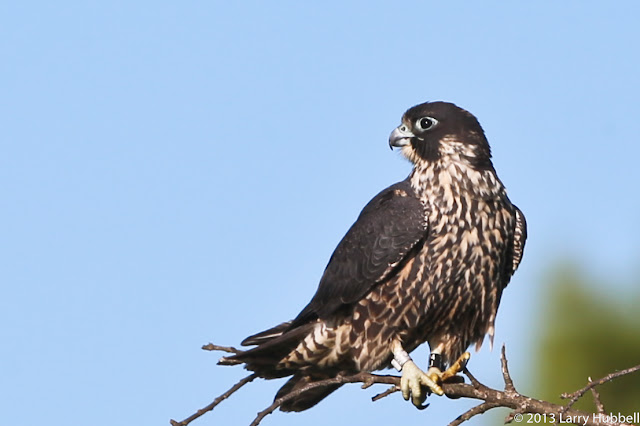 It turns out that Ed Deal put the bands on this bird's legs on May 29th, 2013. The banding of this bird (74U) happened at the nesting site, which was on top of the 1201 (aka WAMU) building downtown. Even with a safety line, imagine how fast one's heart must beat at 50 some stories above the ground. This link shows Ed and others in a similar situation while banding falcons at the ship canal bridge this spring.

Given that the bird is just a bit over two months in age it is still a juvenile. Another clue to its age is the vertical stripes on the chest. In adults the dark coloring on the chest tends to be more horizontal bands. Ed thinks this bird maybe a female. At this point we may only know for sure if sometime in the next few years the bird (and its bands) are observed during the nesting process, but where and when this will happen is totally unknown.

Another clue to its age is the fresh, new look of all of its feathers. No doubt the feathers of its hard working parents are looking a bit frazzled at this point in the process of feeding and raising their young. It does not appear that a single feather is worn or ruffled on this young bird. 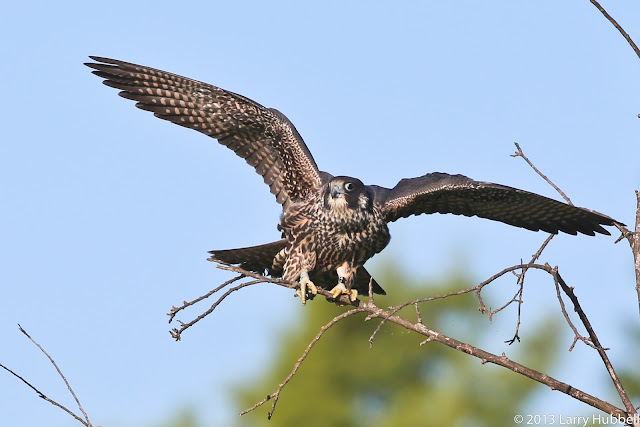 However, figuratively, if not literally, there was another bird in the tree "ruffling" 74U's feathers. 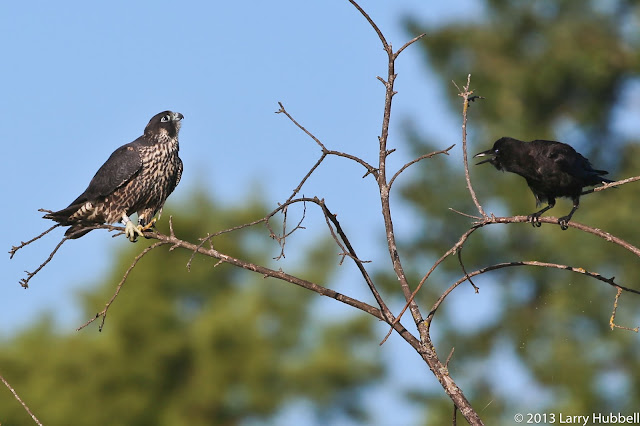 Ed says, "Young peregrines and young crows seem to quite often play games with each other." Apparently they both get some enjoyment and the opportunity to polish their skills.

Sometimes the falcon would turn her head upside down while studying the crow. 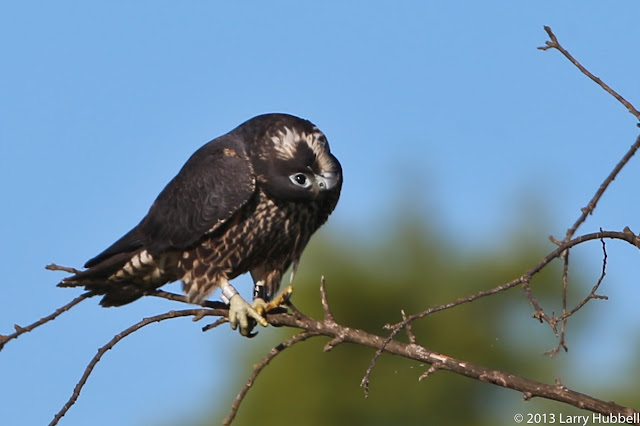 It seemed as if she was wondering, "What kind of creature are you? Why are you willing to hang around with me? I wonder how you would taste?"

During the following sequence it seemed the falcon wanted to take a closer look. 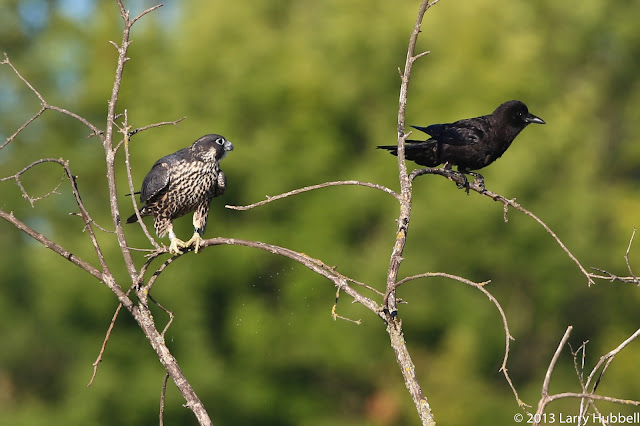 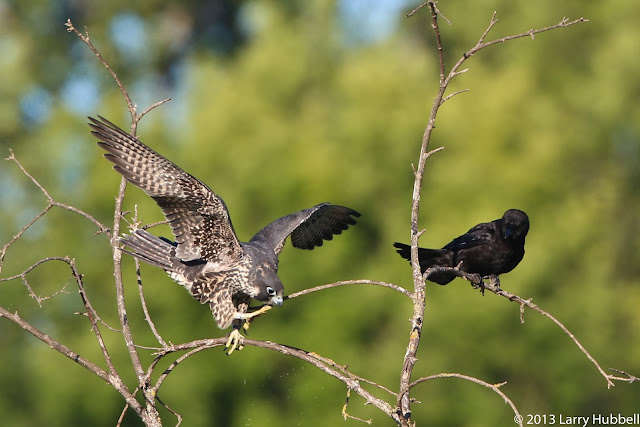 Even though the crow was the second bird to take to the air... 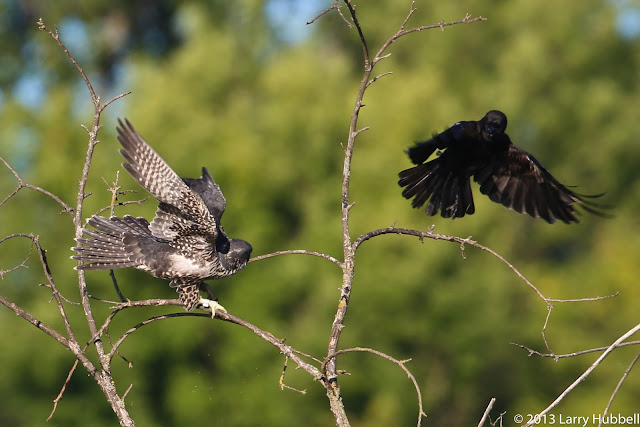 ...the distance between the birds grew quickly. 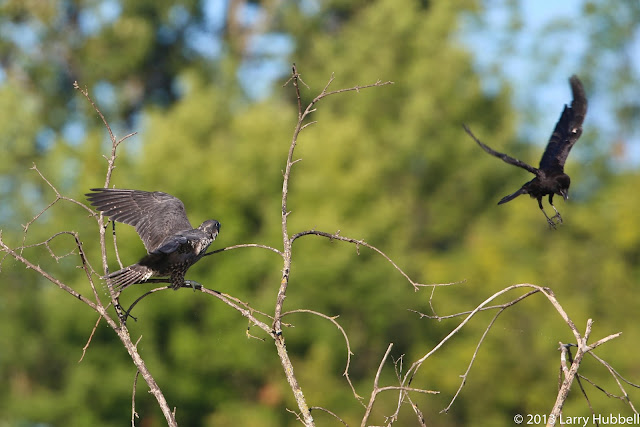 They both settled down and hung out together for another 15 minutes. From a standing start it did seem as though the crow was quicker, and maybe even faster, than the fastest bird on earth. 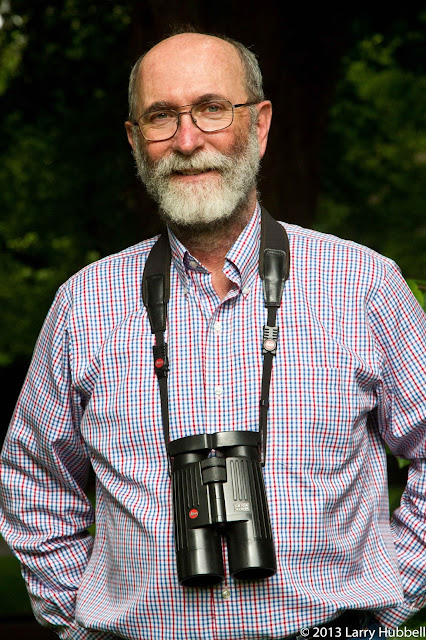 A kind, gentle and courageous man. He is willing to scale tall buildings in pursuit of knowledge that could help us learn to co-exist in a more sustainable fashion with our feathered friends.

What types of birds do you band? Primarily Peregrine Falcons for around 20 years, plus Cooper's Hawks for the last couple of years.

How many nests are you checking on each year? Seven Falcon nests and more than 2 dozen Cooper's nests.

Are you paid to do the banding? No. I actual spend my own money for my banding license and to purchase the bands. (Obviously, Ed also donates a great deal of time, intellect and gas money as well. Larry)

Why do you do the banding? There are two specific data points we are trying to learn about these birds. We want to learn 1) How far they disperse from the nest and 2) If they return to the same territory. In the case of a previous nesting pair at the WAMU building they had young who ended up in the San Juan Islands, the Cascades Mountains in Oregon and even at the LA Airport in California, while the parents remained year round here is Seattle.

Is the city a good place for raptors? There are dangers like cars, planes and window panes, but there is also an incredible abundance of food.

Do you do all of your banding in the Seattle area? For the most part. I participated in some early banding near Lake Chelan that is now handled by HawkWatch. Plus every other year I fly back to Cape May, New Jersey to take part in the Cape May Raptor Banding Project. As the hawks fly south in the fall they stop at Cape May prior to crossing Delaware Bay. It is a wonderful time with hawks of all types.

A huge THANK YOU to Ed for helping to educate all of us about these beautiful and wonderful birds.

A one more photo for the road. 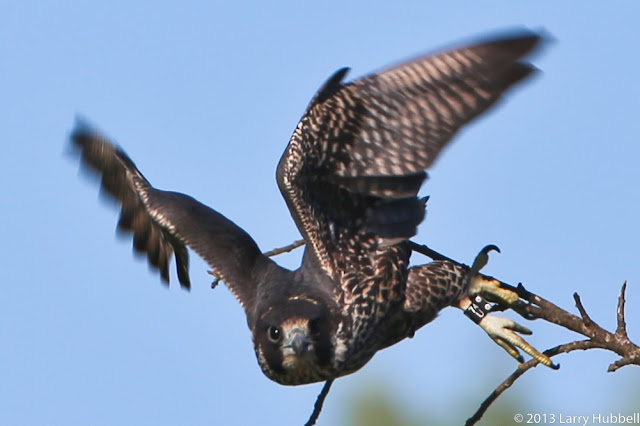 Oh and please keep an eye out for 74U we would all love to know where she is spotted next!

1) Diann MacRae left a comment below suggesting another method for determining this is a juvenile falcon.

(Note the difference between the first shot of the mature falcon and 74U. Compare the colors Diann mention's in her comment.)

3) Also I thought I read an email where Bud Anderson suggested that 74U was a Peale's Peregrine as opposed to an Anatum or a Tundra. For the life of me I can't find the email. If I remember correctly his suggestion was that 74U being hatched on the 1201 building might be the most easternly know nest for a Peale's.

Update to the Update:

Nice job. You always seem to do nice work and thank you for recognizing Ed's work. He didn't tell you even the half of it all.

Our work banding peregrines in the San Juan Islands for 12 years allowed us to collect DNA evidence that was later submitted to a peregrine DNA expert who confirmed that pealei does now nest in the San Juans, a much dryer area than they are normally found. Seattle isn't too far south of that.

I'd like to see some really good photos of the current 1201 adults to see what they look like as I haven't been by there for awhile.

Incidentally, Ken Franklin clocked his bird at 238 mph. That was also done in the San Juans.

And finally peregrines are not just the fastest bird on earth, they are the fastest animal on earth.

Keep up the good work.

Posted by Larry Hubbell at 2:34 PM