Disclaimer: The title of this post is not a reference to the past performance of the Seattle Mariners, however we are all hoping their current spring play is indicative of the future.

On the other hand, these birds do look a bit like uniformed baseball players exchanging thoughts about the current pitcher's weaknesses.

There are many diving ducks on Union Bay but during the coldest half of the year, .e.g. November through April, we are regularly visited by two types of Mergansers. By the way the term merganser is apparently derived from Latin terms meaning "diving goose". The two types of mergansers are the Common and the Hooded Mergansers. At one point this week there were dozens if not hundreds of Common Mergansers floating in the middle of Union Bay. The white bodies of the male birds contrasting sharply with the gray water.

One of the amazing things about the Common Merganser is the bright orange feet. They look like they are made of rubber. It makes one wonder how they can catch fish with those orange feet clearly visible against their white bellies. It would be interesting to see where their feet are relative to their bodies when they dive. Even if their feet are behind their bodies they still can't hide those bright red beaks when they are pursuing a fish. 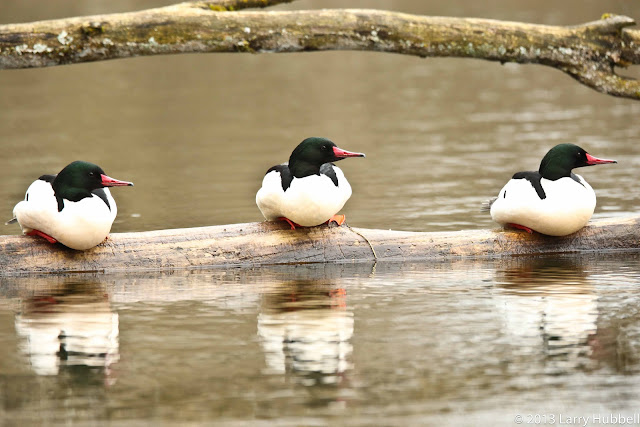 Note: Clicking on the photos will give you a larger brighter version to look at.

In spite of the color their beaks do have some advantages. 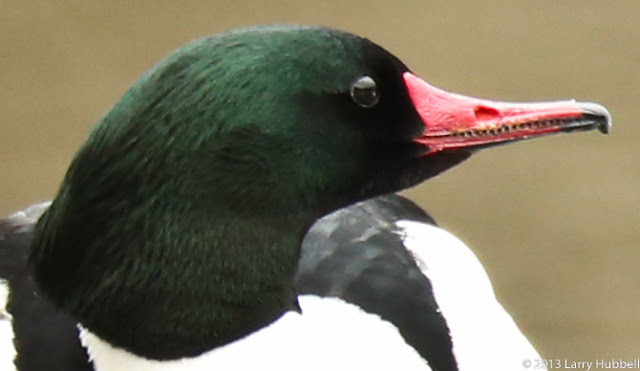 Can you see the serrated edges? These "teeth" help make sure that once a fish is caught it stays that way. In fact a common term for a merganser is a "sawbill".

Curiously both types of mergansers look very different from each other and the male and female of each type are unique as well. Before we end up looking at each type and kind of bird here is a simple challenge. Can you sort these bird bodies by both gender and type of merganser?

Those long tails are obviously helpful when a merganser dives and most likely they are extremely useful for turning under water to follow a fish as it darts to get away.

To the non-birder a female Common Merganser looks so different it might be easy to think it was a different type of bird all together. 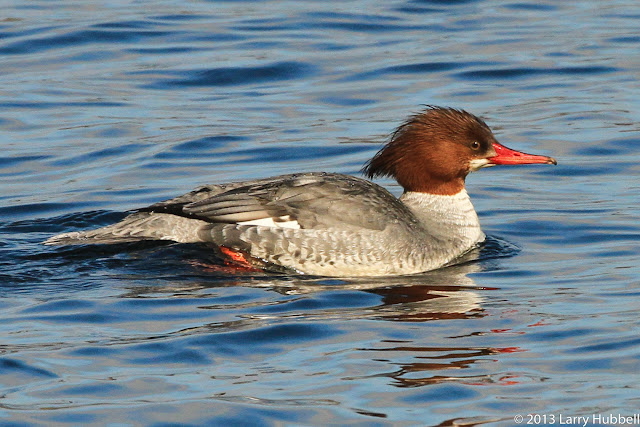 The shape of the body, head and beak, plus the color of the beak and feet are all clues that the female is also a Common Merganser. Seeing the two of them side by side is another hint. 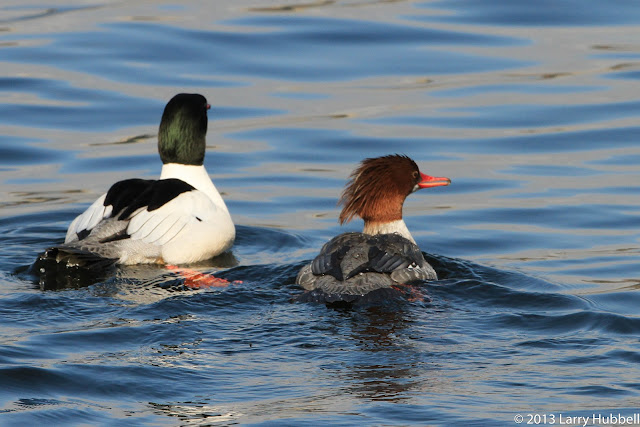 The difference in size between these two birds was a bit of a surprise. It will be curious to watch pairs in the future and see if this is the exception or the rule.

The color, behavior and "hood" of the Hooded Merganser certainly makes the Common Merganser look... common. 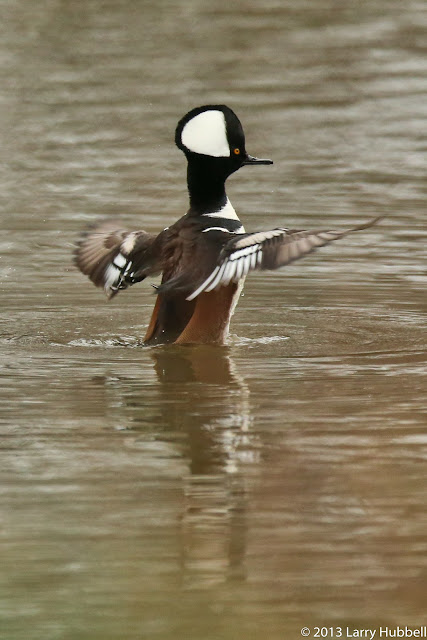 The Hooded is a smaller bird than the Common so it pursues smaller fish and usually works a bit closer to shore. However unlike the Mallards that reside here year round the Hooded is quite shy and will head for deeper water at the first sight or sound of a human. For this reason if you are the first person to reach the edge of Union Bay as dawn lights up the sky your chances of seeing a Hooded Merganser are greatly increased.

This pair were fishing side-by-side just south and west of Foster Island. 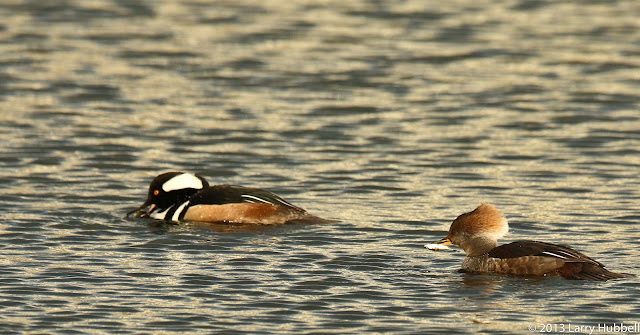 Notice how the female's beak is holding the fish even though most of the fish is outside the beak. Those "teeth" really work. What was curious in watching these two was that while they were both diving and fishing the same amount of time, in virtually the same area, the female came up with fish about three times as often as the male. It makes one wonder if she is older and more experienced or maybe she is already eating for a family and she is simply three times as hungry and better motivated than the male. 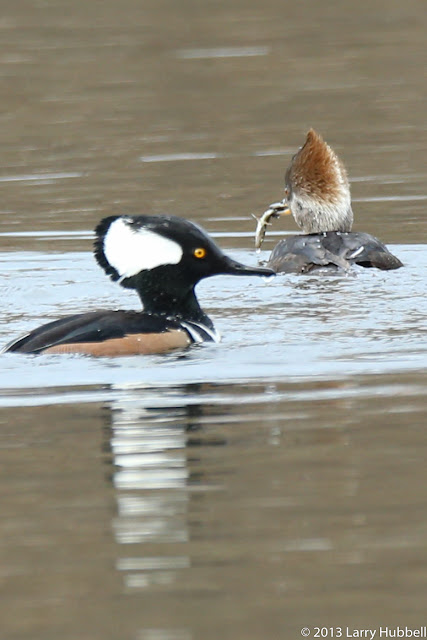 Still it is the males "hood" that generally attracts all the attention. The vibrant black and white contrast and the amazing flexibility that allows the shape to change on demand are virtually irresistible to the eye. 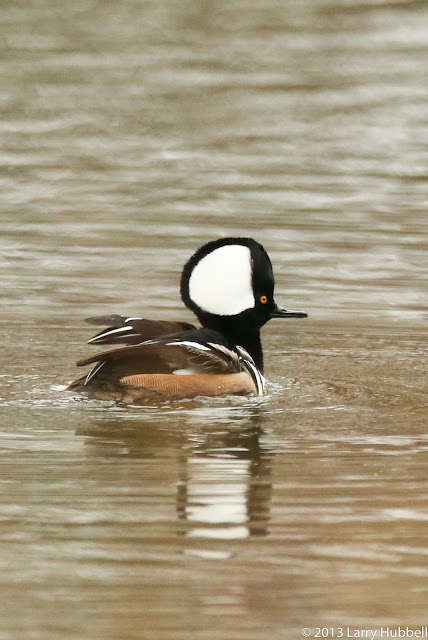 On the surface, while preening feathers, the hood is fully extended and the white area nearly creates a pie shape. 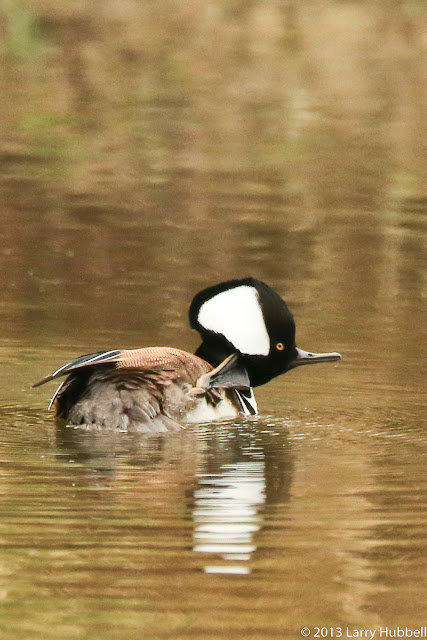 When scratching the piece of pie is cut in half.

Just the difference between head up or down as these two watch their "brother" dive is interesting. 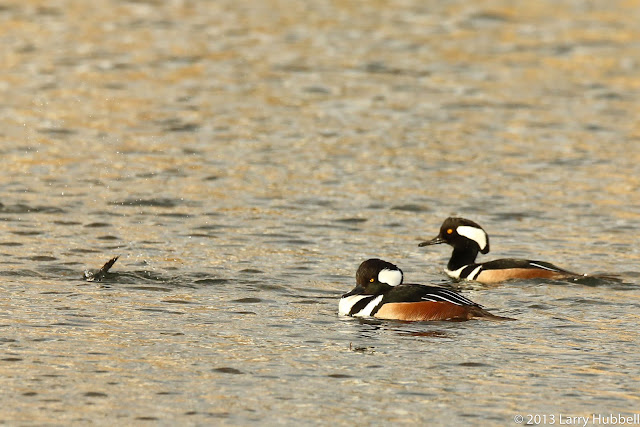 Here is the comma-head look. 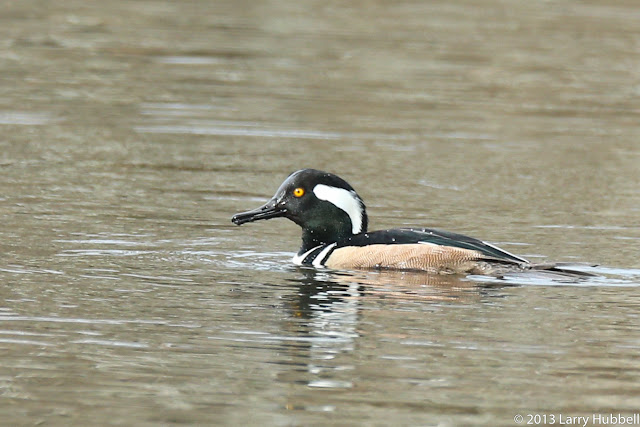 In the previous photo the hood is "retracted", since he just resurfaced, and apparently while pursuing fish the extended hood would inhibit the required twisting and turning.


Even the female hood can be interesting. In these photos she has caught a fish and is shaking it into submission, but look what happens to her hood in the process. 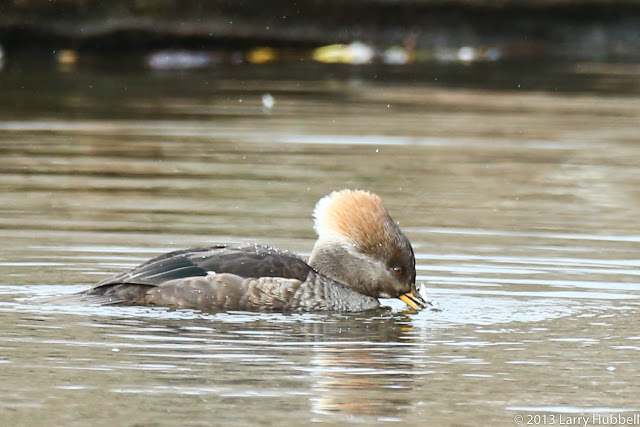 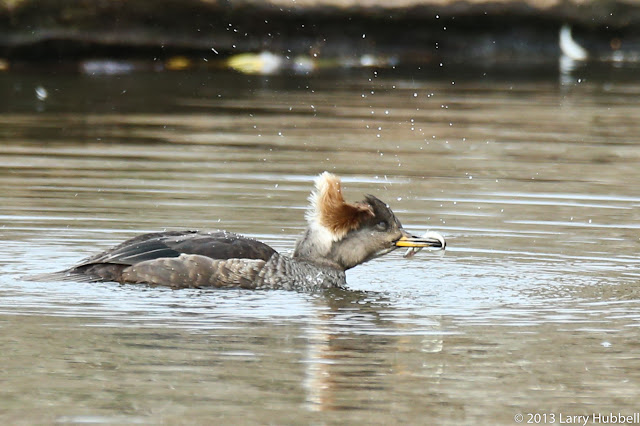 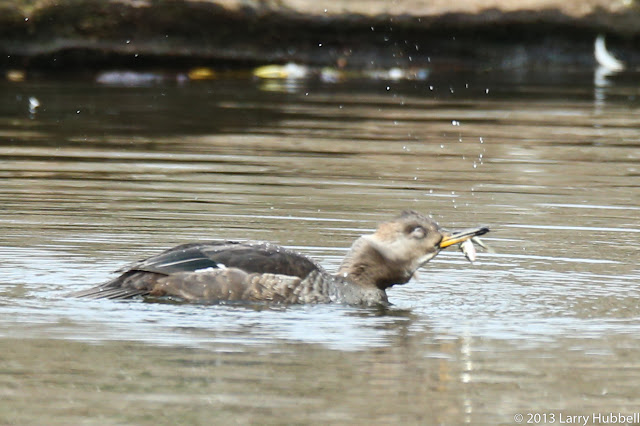 As a matter of fact at a great distance you can see when a hooded has caught a fish by watching their shaking motion, even when the fish is so small and distant it cannot be seen at all.

The answers to the challenge are:

(The rubbery red-orange foot of the female Common Merganser should have been a fairly obvious clue.)

Well the sun has burned through the clouds and it is time to visit Union Bay. :-)

"May the birds rise up to greet you,
The wind blow their feathers into interesting formations,
and the sun shine always on your back." An old photographers proverb.

I have not identified a lot of warblers but this bird seen in Edmonds is a: 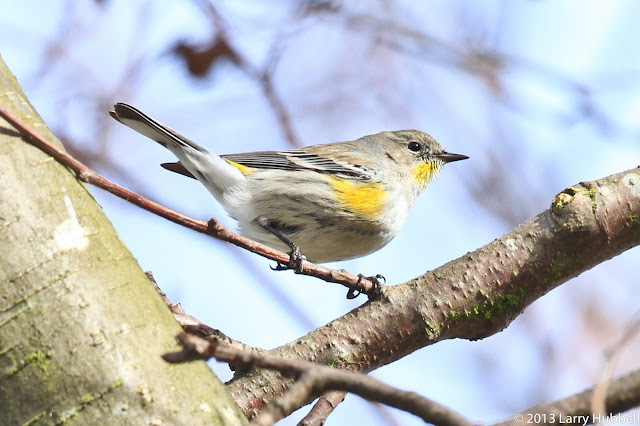 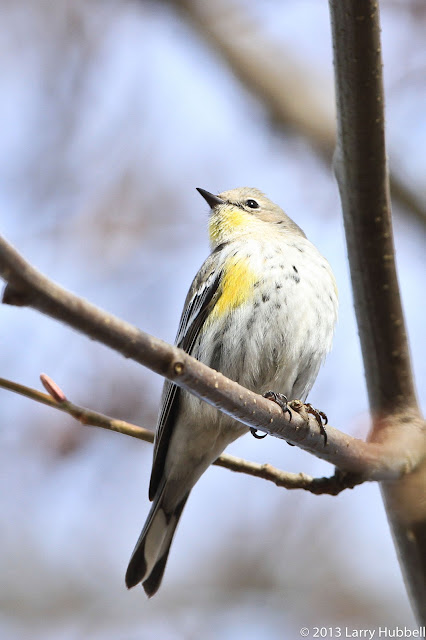 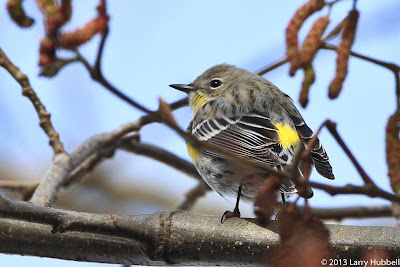 Yellow-rumped Warbler, I hope. Please let me know if you think this could be any other type of bird. Thank you!