Fit for a King

The Belted Kingfisher is one of the shyest birds on Union Bay. 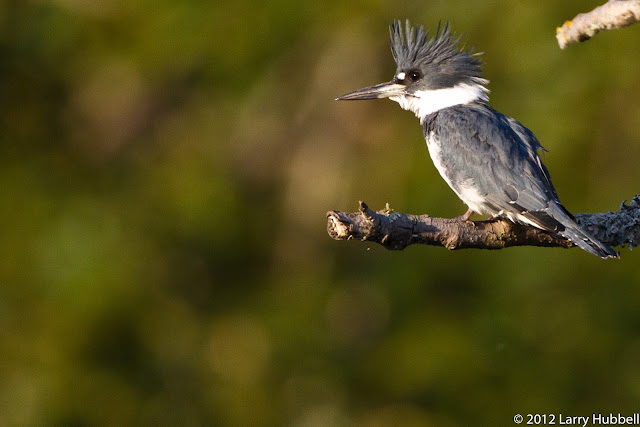 It is most usually noticed as it flies away. It looks like a grey-blue flutter of wings & tail and typically sounds rather aggravated at being disturbed. 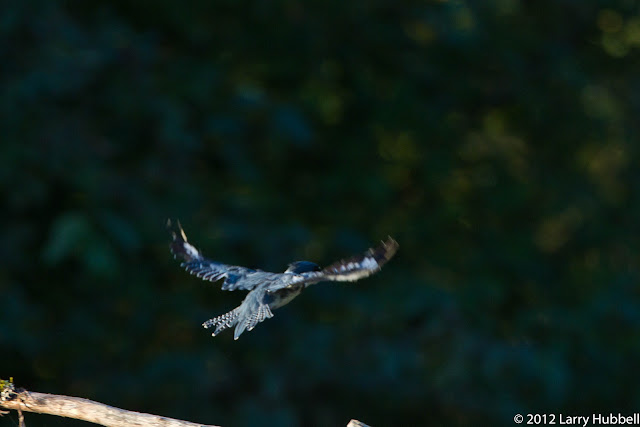 It makes its "rat-a-tat-tat-tat-tat" call as it heads towards some distant tree branch, which seems to always be just above the waters edge.

The Cornell Lab of Ornithology has a number of good recordings of the Kingfisher's call, click here to hear. According to Cornell the average KF is about 12 inches long and has a wingspan of around 21 inches. This actually seems a bit bigger than one would expect, given how small they look as they disappear into the distance.

None the less they are not particularly large so the fish they hunt are normally only a couple inches long. This fits nicely with their habit of hunting in the shallows along the waters edge where the smaller fish tend to live.

If you are very quiet, patient and have good binoculars you may get close enough to watch the Kingfisher at work. This week along the southwest portion of Union Bay a small fish became a feast for the King. 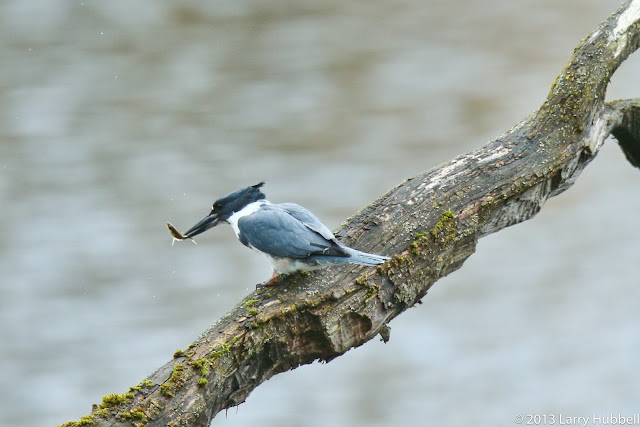 Like many other birds the King's first order of business is to shake the fish into submission. 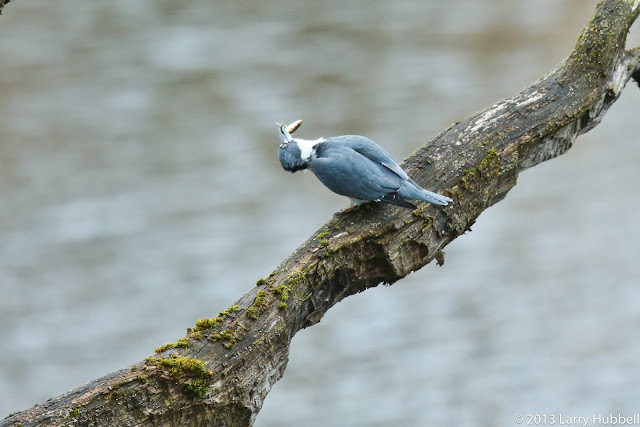 Mission accomplished the next order of business is meal preparation. 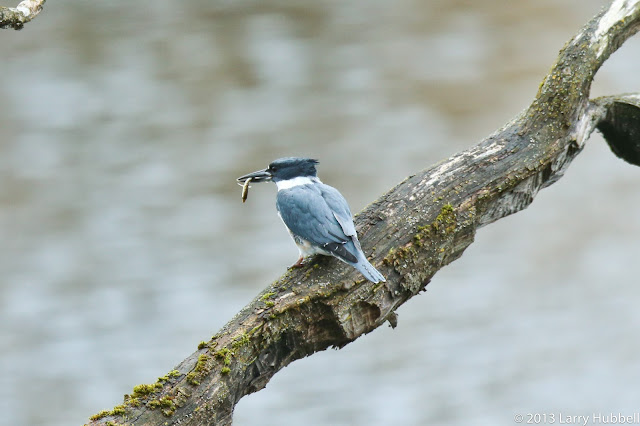 In this particular case the Kingfisher decides to move up to a better vantage point. 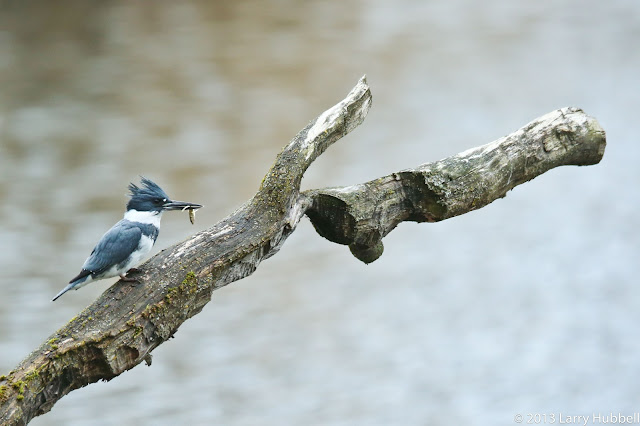 The new location provides a better view of the water below. Maybe more importantly it is a bit further from shore, so possibly it is slightly safer for the KF while it focuses its attention on food consumption. 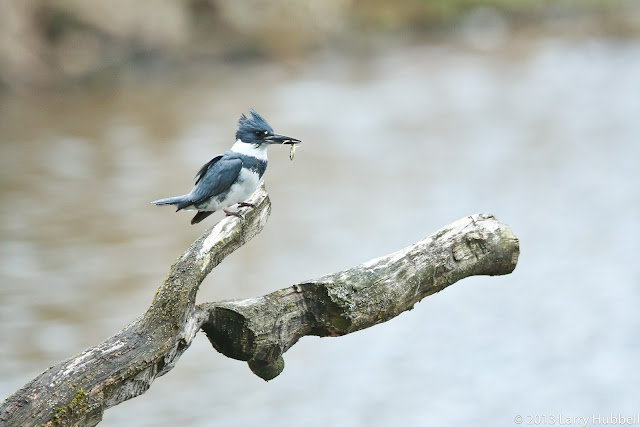 This requires reorienting the fish to pass head first on its final journey. 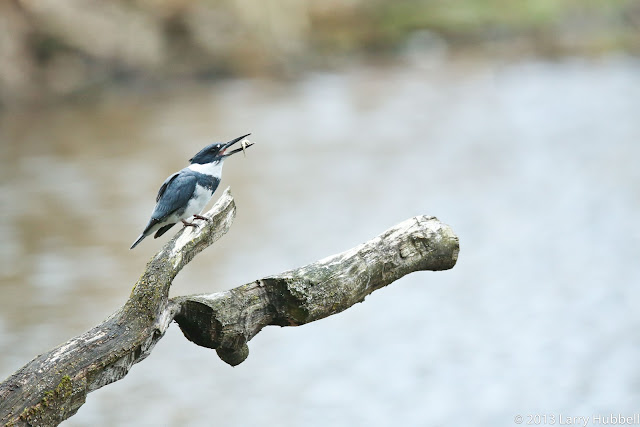 This can take more than one twist and turn. 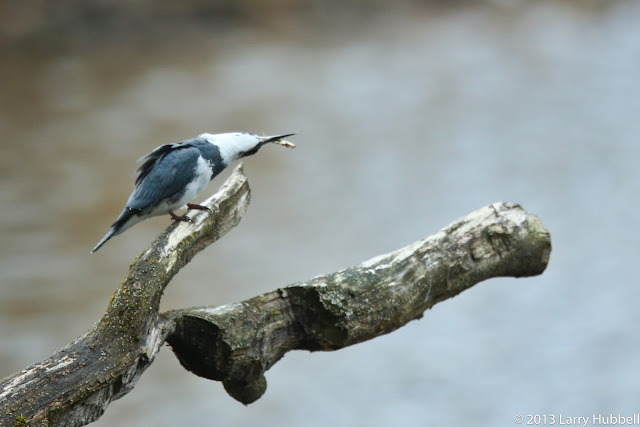 In a few moments the King swallows its meal. Notice the King's eyes are closed. 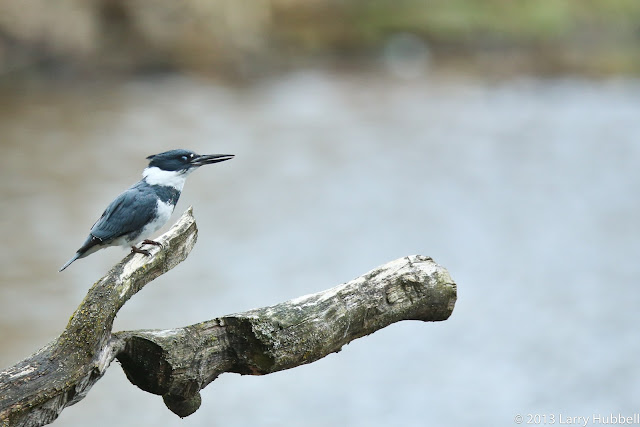 This is most likely an instinct to protect its eyes if the fish happens to start flopping around. However it also creates a moment of danger for the KF who is less aware of its surroundings. 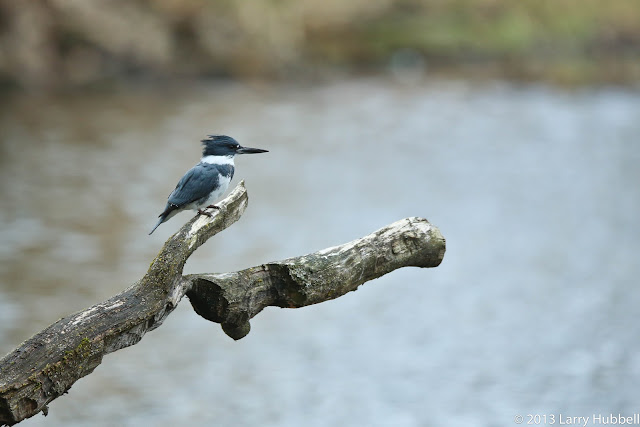 The moment passes and the KF gets ready to move on to its next perch from which it will quickly catch another meal. There are at least two things you should have noticed while following this story. If you would like, take a moment to look back at the photos and see if you can spot two things that were never mentioned.

The first item is the gender of the Kingfisher. This bird and the one (from last summer) at the beginning of the story have a single blue-grey band across the chest and no secondary rust colored belly band. This indicates that they are male. You can see a female photo at this location.

Note: Oddly, during the last two years I have not yet seen or taken a single photo of a female KF on Union Bay. Are there no mating pairs on Union Bay or have I simply not been as observant as I could be? If you have a photo of one and feel like sharing please send it in with the time and location and we will add it to the end of this post. My email is: ldhubbell at comcast dot net

The second item is the state of the branch. This tree originally must have fallen closer to the water. Most likely while the cambium layer was still fresh and tender a beaver worked on the branch and began taking off pieces to pull to its lodge. Probably when the weight of the last piece was removed from the end of this branch the tree wobbled and lifted out of the water and out of the beavers reach. This left the branch in its oddly unbalanced and half eaten state.

On another note here are four photos taken this week around Union Bay. Your challenge is to see if you can identify the birds from these less than optimal angles. 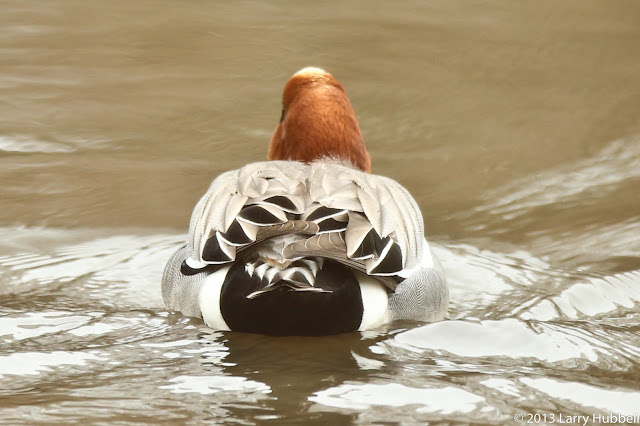 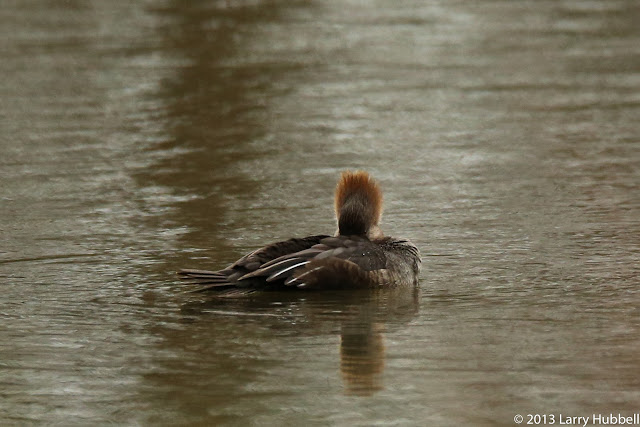 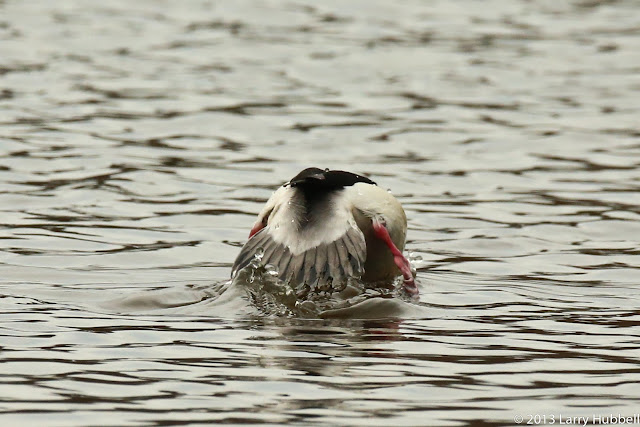 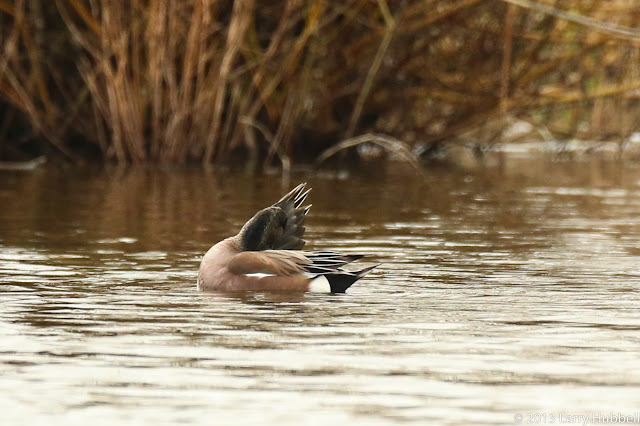 By the way here is a distant photo from earlier this week. It is of the Broadmoor eagles, Albert and Eva, doing their annual family planning. This is good news for those looking forward to more eaglets this year. 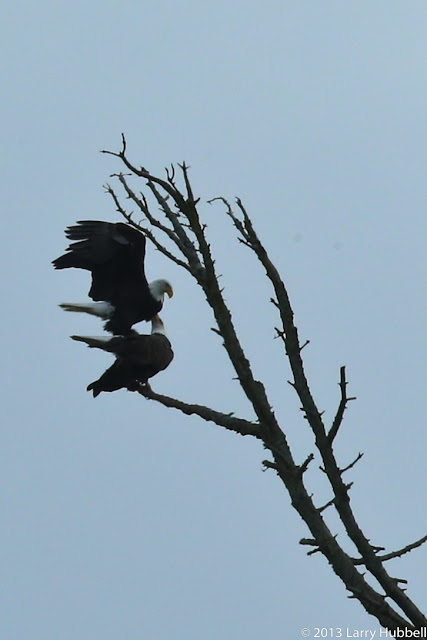 The answers to the photos challenge are:

On still another note I met three students from the Alderleaf Wilderness College at the Union Bay Natural Area yesterday. It sounds like a wonderful place.

On Friday Elvis (The Pileated Woodpecker) was on the SE shore of Foster Island. He may have gotten close to a Flickers nest, because the Flicker zoomed in and landed near him. Elvis but up no resistance and took off toward Madison Park and the Beaver Lodge Sanctuary. This is the only direction I have seen him go when he leaves Foster Island. I wonder if anyone is seeing him regularly in the Madison Park area.

On the way home a Downy Woodpecker was working through the smaller trees around The Empress tree.