Birds tend to appear suddenly and then quietly disappear just as fast. If you visit one of our beautiful Seattle parks and this bird flies past, Would you know what type of bird it is? 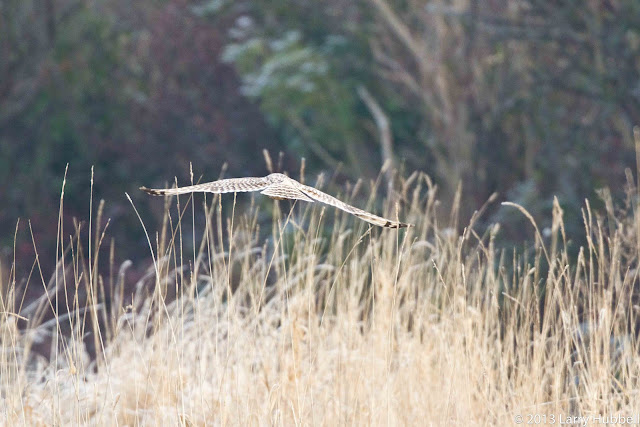 If this view of the bird is insufficient to identify the bird then consider what other information may be available to you. The coloring of the bird tends to blend in nicely with the dry grass, so it looks like it belongs in this habitat. Knowing where it lives tells us something about what it likes to eat. Grassland tends to support small rodents, mammals, insects and some small birds.

Historically, our mystery bird has been seen a handful of times in the Union Bay Natural Area, at Discovery Park and a bit more often at another Seattle park. Lately, there have been a number of sightings at this third location. Almost all of the visits have been during the late fall or winter. eBird shows no documented cases of this type of bird in Seattle in the summer.

If you would like a bit more information take a closer look at the next photo. 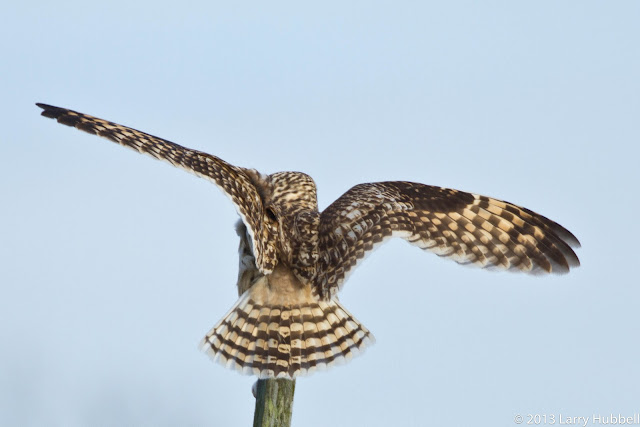 The brown bars on the tail and the cream coloring on the wing should help a bit, still a side view would provide even more information. 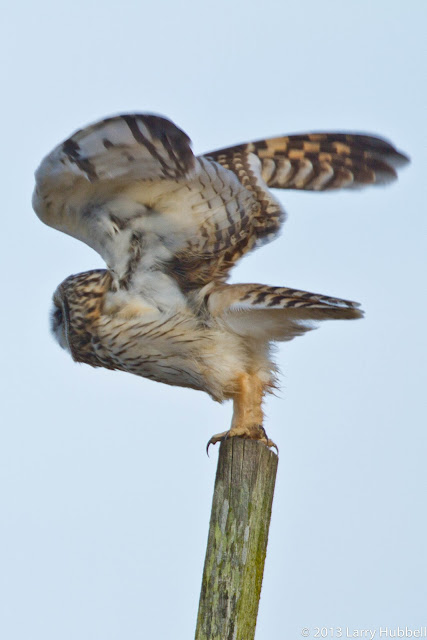 That flat face is a real give away isn't it? We are clearly looking at some type of owl. The question is which type? The body coloring is not barred enough to be a Barred Owl. 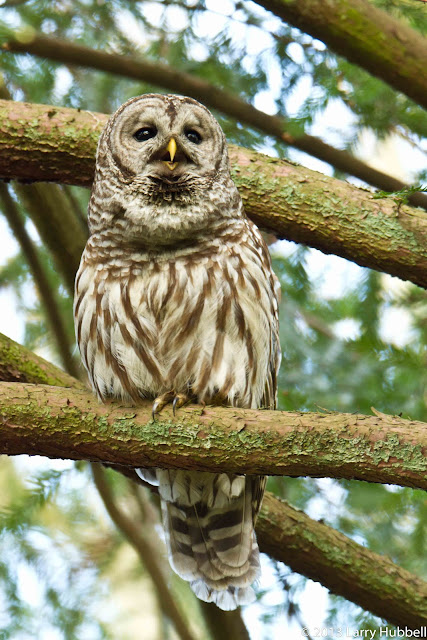 Plus the Barred Owl tends to hunt among the trees more than the open spaces or fields.

On the other hand the coloring is a bit too dark when compared to the Snowy Owl. 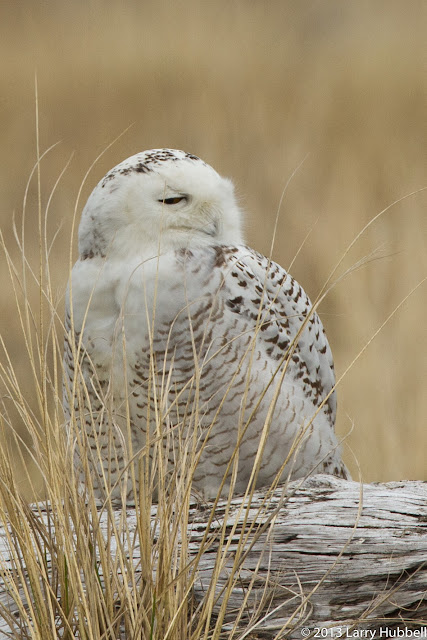 The owl we are focused on is by far the most active of the three owls. It will spend hours circling and turning just a few feet above the grass in an open field. It seems as though it usually keeps one wing parallel to the ground while using the other wing like a rudder. In addition it constantly alternates which wing is parallel and which is up in the air. 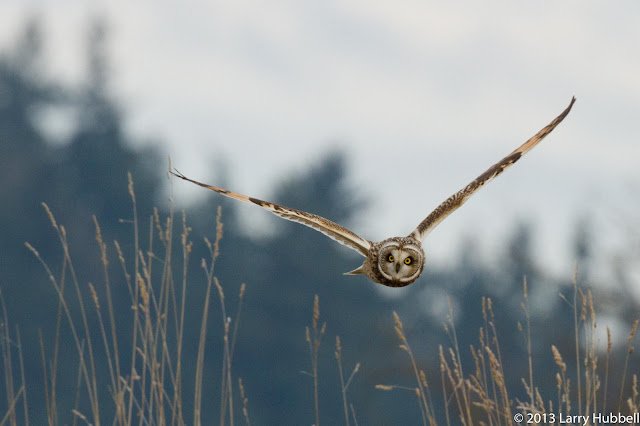 It will dive repeatedly and only occasionally will it actually catch its prey. 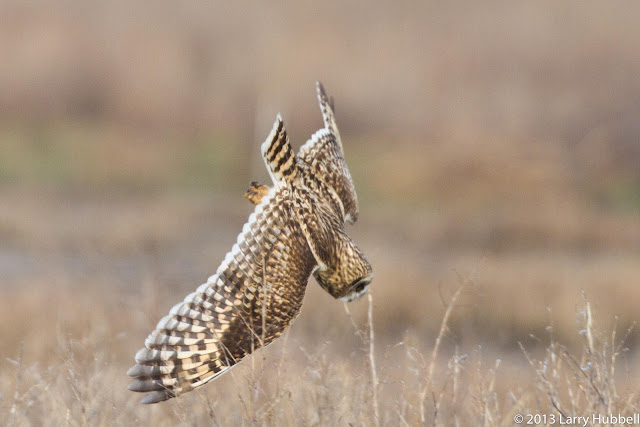 However this approach has turned out to be very effective as this bird, including all the sub-species, is found in North America, South America, Asia, Africa, Europe and even in Hawaii.

Our mystery bird is the Short-Eared Owl (SEO). 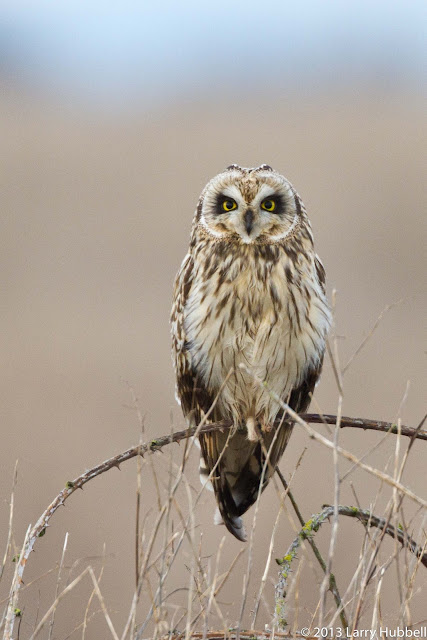 The small ridge of feathers sticking up on top the head is what gives the SEO its name. However they are not ears and in fact they are not usually visible. Yesterday, one of these birds was seen by Doug Schurman at Magnuson Park. It might be worth it to take a walk in the park.

Here are a few more shots to help inspire you to get out into the cold and the fog. 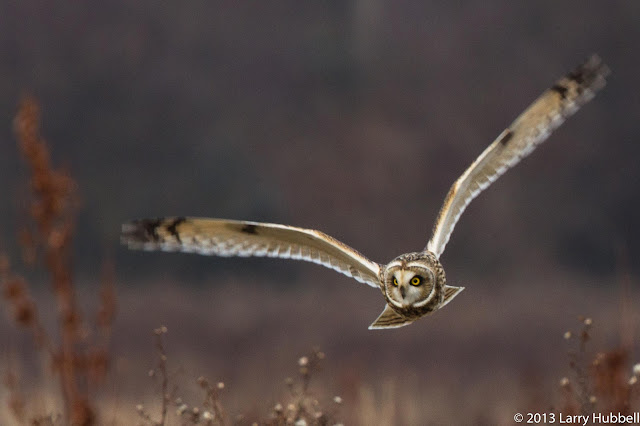 Aren't you glad you are not the small creature at the other end of that focused stare. 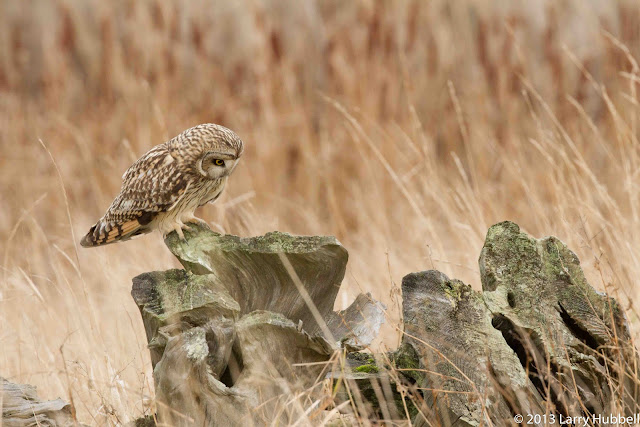 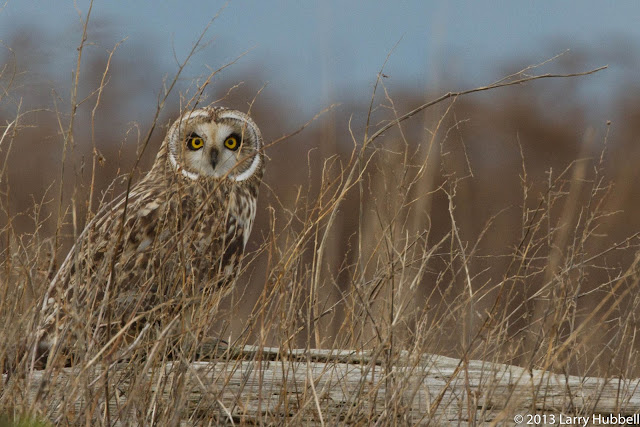 By the way Marcus Roening, my master birding friend, was the one who first took me to the fields near Stanwood, where many of these photos were taken and he continues to inspire my birding efforts today. If you are up for a road trip the large open areas near Fir Island and Eide Road provide many excellent Short-eared photo opportunities.

My true hope is that we all get a chance to see the Short-eared Owl right here in Seattle.

For those who realize a bird must eat, here is an early attempt at video that turned out to be slightly out of focus, which actually makes the viewing a bit less graphic.

In the Comments below Penny mentioned that the SEO can make a sound similar to a dog barking. Here is a link to the Cornell site, the second sound track is as Penny described it.