Elvis is in the Park

Elvis is a male Pileated Woodpecker (PW) who has staked out a territory in the Washington Park Arboretum on the south side of Union Bay. The territory includes the south end of Foster Island and the area immediately to the west. Yesterday, Elvis was even sighted as far west as the south end of Portage Bay, in the area near the Montlake Community Center. 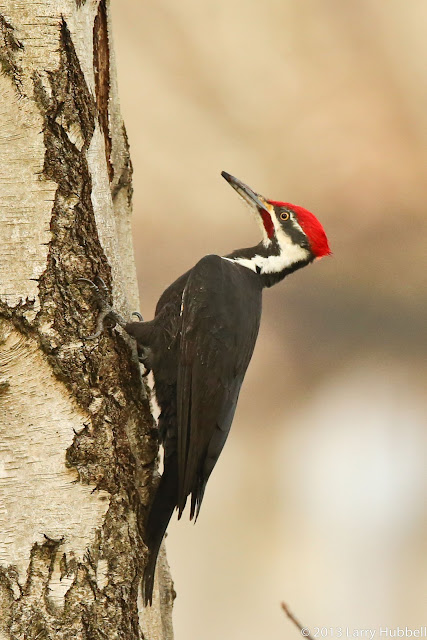 One might ask, Why call him Elvis? To begin with there is the "hair" and the striking good looks. If you would like to compare to the original Elvis, click here.  Kind of makes you wonder where Elvis Presley got the idea for his hairstyle. 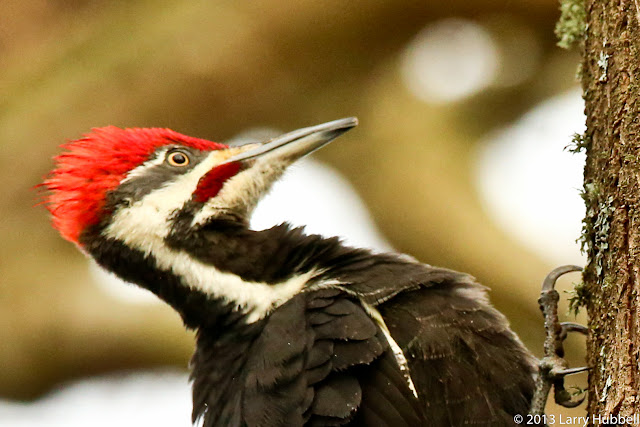 Additional reasons for the name include being loud, proud and uninhibited by a crowd. Elvis seems to make his loudest call when he is moving between locations. This call can be heard at a fair distance and is an easy way to locate his general area. The first recording on the Cornell Birding Lab is virtually identical to the in-flight call Elvis makes. Click here to visit the site and listen to the call. You may want to learn the call of the Flicker as well since there are plenty of Flickers in the same area and their calls can be confusing. Click here to listen to the calls of the Northern Flicker.

On Monday Elvis spent time excavating a hole in a dead tree about 25 feet above the very busy trail to Foster Island. At least a dozen folks and their dogs stopped and watched in awe as Elvis sent a constant flow of wood chips to the ground. 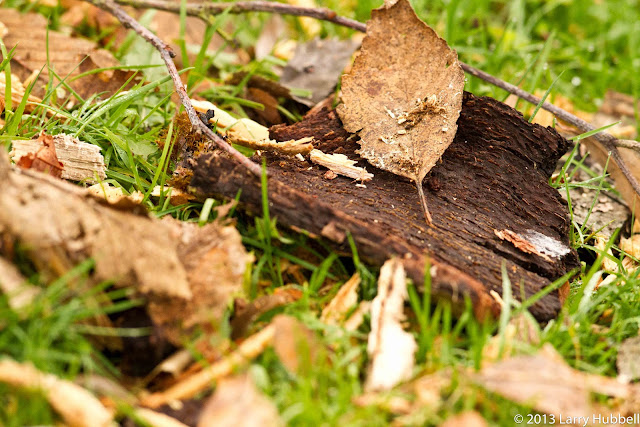 The wood chips formed a very visible half circle, with a diameter of over 20 feet, around the base of the tree. Neither the dogs barking nor people talking disturbed Elvis in the least.

If you are wondering how we know that Elvis is male and not a female you might want to investigate the post  Pileated Discrimination. Another question that comes to mind is, how can we be sure we are looking at Elvis as opposed to any other male PW? In an effort to sharpen your powers of observation see if you can spot the mark(s) that make Elvis uniquely identifiable. Note: Elvis is also in some of the photos in the prior post, mentioned above. The answer will be revealed in the Odds and Ends area at the end of this story.

It is also interesting that Elvis apparently does not yet have a mate, at least none has been sited. This leads one to wonder, will Elvis find a mate before spring? If so, will they build a nest near Union Bay? Will they raise young here this spring? Is there enough food in this area to support Elvis and a family?

There was a nest in Interlaken Park last spring with at least one nestling. Possibly, that nest was where Elvis was born. 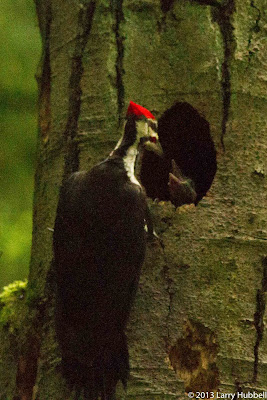 The Cornell Lab says that PW's tend to build new nests each year so we have no way of knowing where or if a new nest will be built near Union Bay. PW nests are often reused by other birds. In our area Flickers and Wood Ducks seem like prime candidates to move into the old nests.

Have you ever wondered how long it takes a PW to excavate a hole? To some degree it must depend on the quality of the wood and of course the size of the hole. Last Sunday Elvis spotted a couple of preexisting holes in a rather healthy looking tree, he checked them out for insects before deciding to drill an exploratory hole just above them in hopes of finding more food. From start... 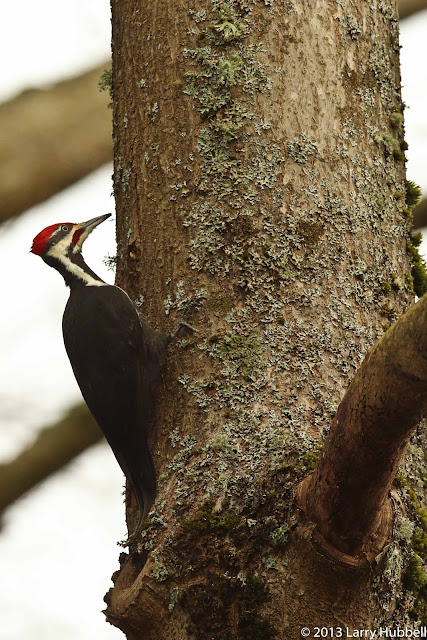 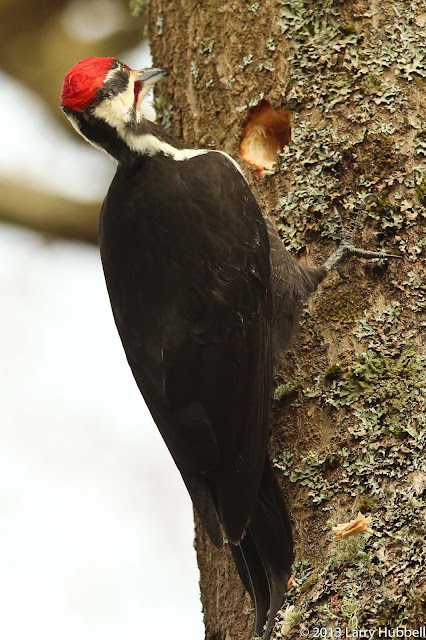 ...it took Elvis less than 6 and a half minutes to create this head sized hole.

On Monday Elvis had opened this hole in just a couple of minutes. 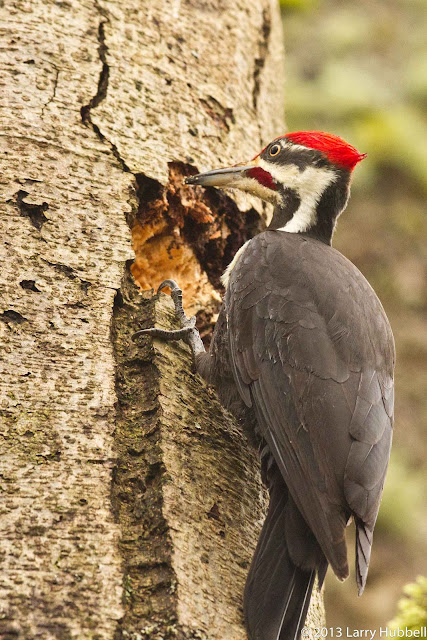 However in less than two hours Elvis enlarged the same hole... 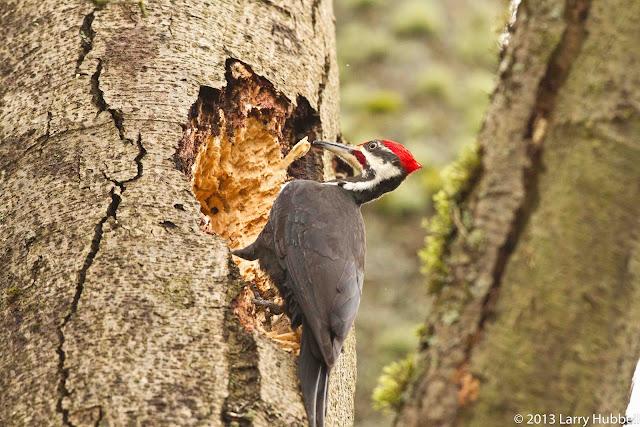 ...to the point where he could climb into the tree. 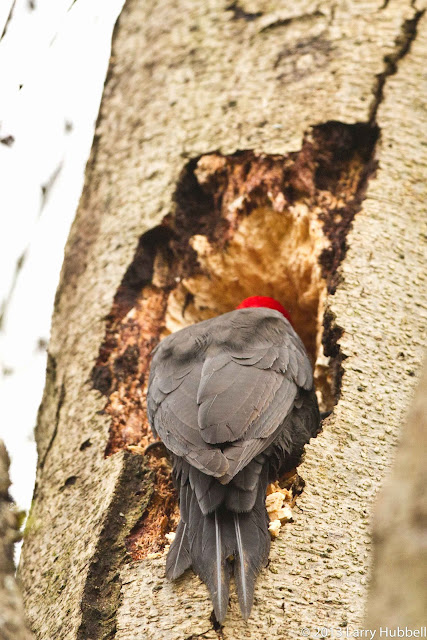 This was in a dead and decaying portion of a tree and Elvis was stopping to eat on a regular basis. Most of the carpenter ants and termites that PWs feed on are found in "snags" like this. So it is wonderful that the Washington Park Arboretum leaves dead trees standing, since they are a critical part of a healthy ecosystem.


I hope you enjoyed this week's post and will keep an eye out for Elvis when you visit the parks near Union Bay.

If you look at the white stripe running up and down the left side of Elvis's neck you can see a black mark near his shoulder that extends into the white area. 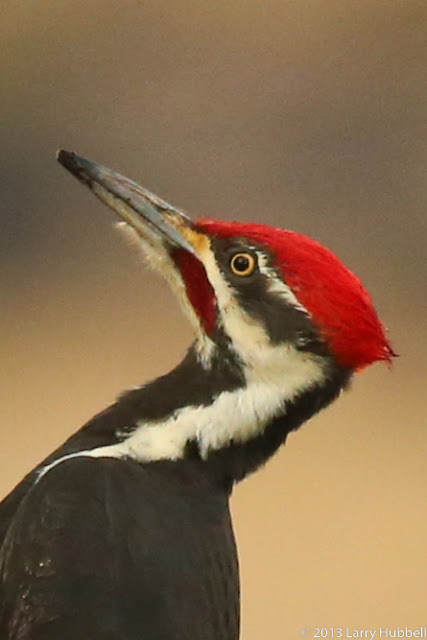 A similar mark is not as clearly visible, if at all, on the right side nor is this type of mark visible in any other photos of PWs that I have taken. This may not be the only mark unique to Elvis but it is fairly easy to see and appears to be reliable. If you happen to see or photograph Elvis please email the time, place and the photo or leave a comment at the end of this blog. It could be very educational for all of us to follow Elvis and find out if he takes a mate and raises young this spring.