Danger in the Park

Yesterday the following email was received from the Arborist at the UW Botanic Gardens.

"Thank you for your concern regarding the woodpecker event. I was not in the office yesterday, so I apologize for my delayed reply.

Yes, we are well aware of the situation and have been monitoring for the past week.

Several factors go into a risk assessment regarding trees, wildlife and people. The health and vigor of the tree are taken into account. The potential for damage and the likelihood of that tree or branch failing are also taken into consideration. Lastly, the value of urban wildlife plays a large role in the management of the WPA. Mitigation options including pruning, cabling, or tree removal...or remove the target (trail and people).

In this case, the tree (Chinese empress tree) has been in decline for many years. The branch is probably more likely to fail due to the woodpecker, but I would still consider the risk to be moderate. In the past, closing and re-routing trails has limited effectiveness. Removing the entire branch removes the wildlife habitat (bad) and creates a large wound on the main trunk of the tree (also bad).

I prefer a pruning solution that retains the habitat, while minimizing risk to visitors. This type of pruning would attempt to mimic a natural branch fracture slightly above the woodpeckers feeding site. Pruning in this manner has been controversial as it does not represent a "correct" pruning cut in the traditional sense. However, I think it may be the best course of action in this incident.

Thanks again and I look forward to hearing your thoughts on this."

Clearly this is a well thought out attempt to balance all of the various factors involved. We are lucky to have the Washington Park Arboretum in such good hands. By the way if you have never seen this particular tree in blossom it is a beautiful site and worth a visit on its own. Here is a link to what I believe is a similar tree in blossom.

On a different note here is an interesting sequence of Elvis photos taken last Sunday. 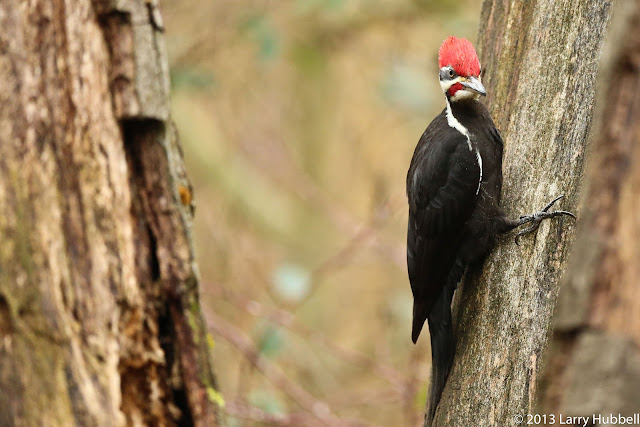 In the first photo we can see how woodpecker feet differ from many other birds. Instead of having three forward toes and one hind toe the woodpecker has two toes in each direction. Clearly this increases the ability to grasp and hold from all directions. I am pretty sure I remember seeing a Pileated Woodpecker striking a tree with force while hanging upside  down which demonstrates the strength of its grasp.

When we were looking for Elvis the other day Doug Schurman mentioned seeing a PW throwing its body at a tree. This next photo, taken just a split second after the photo above, is clearly out of focus but it is does show Elvis leaping off the tree on the right and throwing himself at the tree to our left. Notice his wings are not being used at all. An eagle making a similar move would almost always have its wings extended for balance. He is completely at ease with the strength and power of his legs. 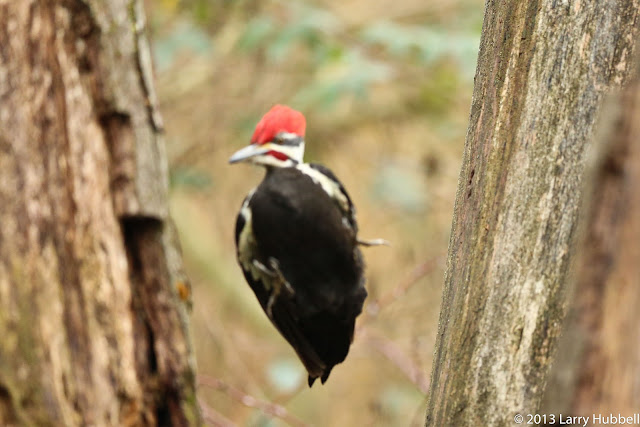 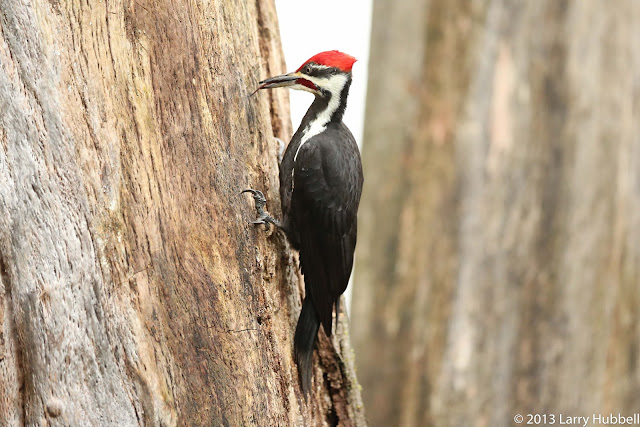 Once again you can see the use of the four opposing toes and how they grasp a fairly smooth surface with ease.

Have a great time in the park.

Yesterday, Elvis was once again at work in the park. 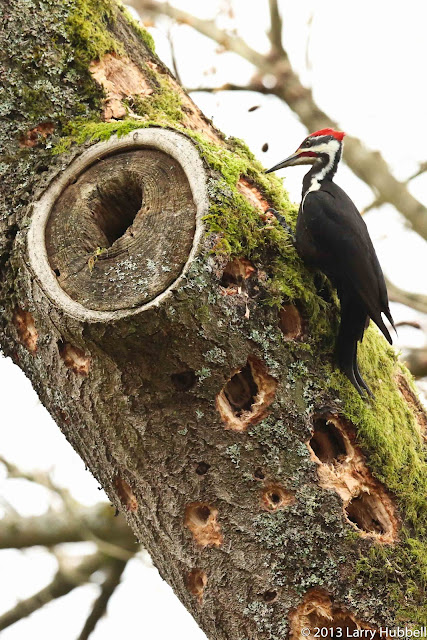 This time he picked a branch that actually extends over the trail to Foster Island.  The quantity of holes and wood chips indicates he has been working this tree for a few days. Some one passing by asked if Elvis was damaging the tree. It is true that his holes are weakening the branch and increasing the danger of it falling. On the other hand his reason for drilling into the tree is to get at the bugs that have been destroying the branch from the inside out. This means Elvis is, in effect, giving us a visible sign of the weakness of the branch.

This evening a closer examination of the photo above revealed dark wood inside these two holes. This shows that this hollow portion of the tree has been exposed to air for some time. 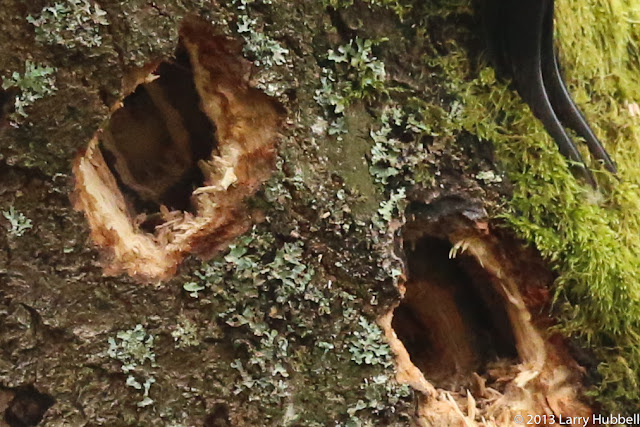 Most likely some creature, maybe carpenter ants, have hollowed out a sizable cavity inside this branch. The danger was here before Elvis began searching for food. His work has simply informed us that we should not be walking under this branch. This tree is located just north of the intersection of Foster Island Road and Arboretum Drive.

Here is the same branch when approaching from the south. 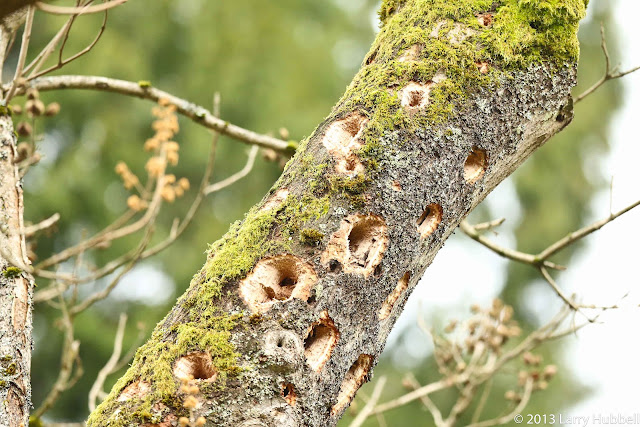 There are a number of interesting photos from this encounter with Elvis that will be published later when time allows. Tonight the main goal is just to warn you to avoid this branch. The folks at the Arboretum have ben notified and I am sure they will take action as quickly as possible. Here is one parting shot of Elvis when he appeared to be hiding from some sort of danger. It seemed appropriate. 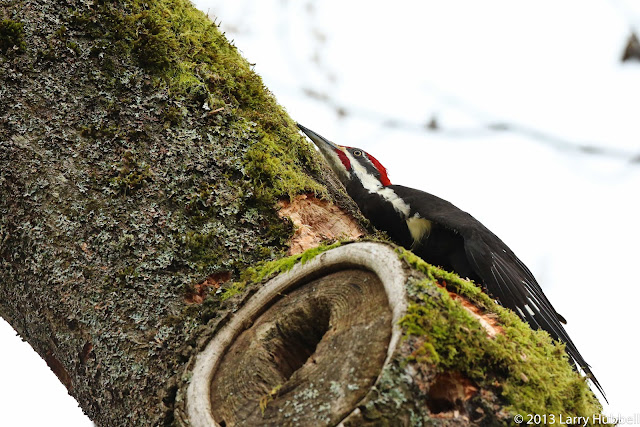